Since reading the novels of a certain boy wizard, one of my biggest dreams, or fantasies depending on how you look at it, was to become a wizard in training. Of course as we already know I’m also a huge anime fan, so when a series like Little Witch Academia was introduced to me, combining two of my biggest pleasures, I instantly fell in love with the story and its characters. Once Little Witch Academia: Chamber of Time was announced I’ll admit I was really excited, but as always also nervous as to how Bandai Namco would handle this magical little gem.

Little Witch Academia tackles the popular magical girl motif with a different spin on the tried and true anime formula. Opting out of the magical transformations and instead placing its ensemble cast into a magical boarding school full of mysteries and the occasional ogre custodian. Chamber of Time tells the tale of Atsuko “Akko” Kagari and her best friends Lotte Jansson, and Sucy Manbavaran accidentally coming across a hidden chamber within the school library. Akko being the ever-curious character can’t help but touching, and accidentally activating a magical hourglass that places her and her friends in a Groundhog Day-like time loop. From here players are tasked with uncovering the mysteries of the room and breaking free of the continually repeating day.

Little Witch Academia: Chamber of Time is broken down into two gaming components, one consisting of a 2D action side-scroller, and the other a 3D adventure explorer in which you’ll explore the prestigious halls of Luna Nova. I am pleased to note that Chamber of Time captures the magical feel of the series superbly, with the animation style wonderfully faithful, and the original Japanese voice cast returning for the game. Not only this, but the integrated anime cut scenes are a delight to enjoy and add to the game’s experience, particularly for fans of the series.

Once I found my bearings I was eager to explore the mysterious dungeon found within the hidden chamber, beneath the library. At first there was very little to do, owing to the fact that the dungeon required a specific set of magical keys to unlock different areas to explore. After progressing through enough of the game however, I was able to acquire a collection of different keys and set off for adventure. To explore the dungeon, you first need to pick your three desired magical girls each with their own stats and special abilities, in my case it was mainly Akko, Lotte, and Sucy mainly because I wanted to stay as close to the anime story as I could.

Upon entering a dungeon you take control of one main character while the other two girls acted as support fighters. This is where I first ran into problems with the A.I. support characters being slightly less competent at back-up then I required. It became rather obvious, early on, that to be of any assistance I would need to ensure both their abilities and stats were good enough so that I could act independently and still come out on top. Making sure that each character was given their own specific element of magic and decent equipment made for a much easier run of each dungeon. Getting to level up my magics as the game progressed was particularly satisfying as there was a limited number of spells in the beginning, but soon opened up to a wide variety of offensive and defensive spells. 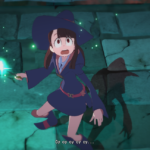 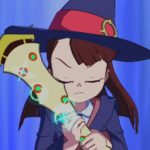 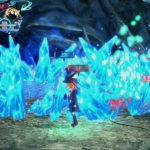 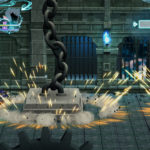 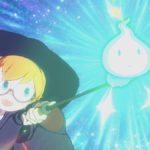 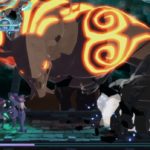 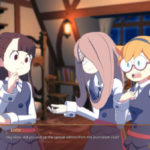 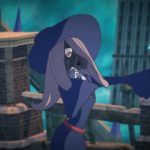 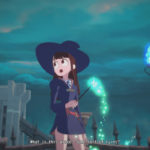 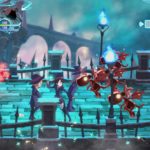 Little Witch Academia: Chamber of Time encouraged the use of all seven playable characters, as they each possess handy abilities and yielded better results when combined correctly. This kept the gameplay refreshing, even if I did have my own personal favourites. The levels themselves were full of monsters and traps, all dead set on making sure you got no further. Unfortunately the games handling systems were often times frustrating, as some attacks required the controlled character to be facing and lined up perfectly with the intended target, something not always achievable in the heat of the moment. This led to countless spells misfiring in the wrong direction and a waste of precious mana.

“Getting to explore Luna Nova in My Little Witch Academia: Chamber of Time is certainly a lot of fun.”

Getting to explore Luna Nova in Little Witch Academia: Chamber of Time is certainly a lot of fun. The school halls are literally buzzing with students and teachers everywhere. Unfortunately exploration becomes very time consuming, especially since there is no immediate quick travel options. Even after they do become available it comes at a cost, and really detracts from what should be a pleasurable experience. Being caught in a time loop, I found myself coming across the same events over and over, but with one ever changing variant – me.

You learn quickly to pay attention to the clock up on the screen which determines your actions and decisions as many side quests are time sensitive and can be missed, until the day loops back that is. Also, if it wasn’t for the side quests section in the game menu, it would have been a much more difficult game to play through. Each event had its own importance with many key items up grabs, and while I’ll admit there were tedious moments aplenty, it did appease the role-playing game perfectionist in me.

Chamber of Time certainly does a lot to bring the magic of the anime into this game, but there were still some poor development choices that should have been addressed prior to release. As mentioned earlier, there is a lot of back and forth between locations with very few options for quick travel. The battle control system, while fun, feels slightly unfinished with your controlled character frequently missing attacks and your assist characters just running around and getting knocked out too early. On top of this, as with most games that stem from an anime, players with no background knowledge of the series are going to have a much harder time investing time and energy into a game with pre-established lore.

Little Witch Academia: Chamber of Time, while quite the enchanting game, still has its own series of shortcomings that left a sour taste even butter beer couldn’t completely mask. It is for sure a fun and entertaining game, but it still falls short of what could have been a fantastic game thanks to its repetitive gameplay and often times janky control system. These issues aside it was still quite the bewitching game and certainly a must have for any fan of the series.