When I heard that there was a game that blended fluid combat, RPG upgrade systems, a fantasy setting, and a murder mystery, I was immediately intrigued. Omensight, from Spearhead Games, is a spiritual successor to the studio’s previous title “Stories: The Path of Destinies”, and tasks you with saving Urralia (the game’s fictional setting) from annihilation by repeating the same day over and over again from different perspectives.

Every fantasy cliche is thrown into Omensight, resulting in a competent-yet-trite experience: an all-powerful monster from the “void”, an ancient relic with the power to defeat said monster, empires at war, secret rituals, priestesses… at times it is a bit much. The game has its flaws, however underneath this is a solid, intriguing, and enjoyable indie title that is definitely worth a look.

Omensight takes place in the land of Urralia where factions of cute anthropomorphic animals, Pygaria and Rodentia, are at war. You control the Harbinger, a mythic being that appears when the world is about to end. The Godless Priestess Vera is murdered and her soul is sealed away inside the void, which brings forth the monstrous Voden to wreak havoc upon Urralia.

As the Harbinger, you will redo the final day over and over again to solve the mystery of Vera’s murder, locating her lost soul, and stopping Voden. A being outside of time and space, the Harbinger restarts the final day at the Tree of Life, inhabited by a helpful witch who guides and assists the Harbinger to solve this mystery and provide means to upgrade your abilities, weapons, and look over the clues you’ve gathered each day.

From here, you can select which of the four side characters you will accompany on the final day. Their stories will reveal the motives, circumstances, and schemes that cause the inevitable apocalypse, with each piece of the puzzle slowly clicking into place over the game’s 12 – 15 hour campaign. Along the way you’ll pick up new abilities, which adds a light metroidvania element to the game which aids in making the game not feel too bogged down in its repetitiveness. Unlocking  new areas with these abilities can often result in new clues too, pushing you along the road to solving the grand mystery before you.

“…slowing time, grabbing an explosive barrel, and lining up an energy shot creates a massive arcane explosion that can devastate the battlefield…”

Omensight employs simple-yet-enjoyable combat that grows and deepens as the game progresses. The light RPG mechanics culminate in unlocking new techniques and attacks as you gain levels. These techniques can be chained together for some really exciting action sequences too, for example slowing time, grabbing an explosive barrel, and lining up an energy shot creating a massive arcane explosion that can devastate the battlefield. Each faction in Urralia have their own combat style; the cheeky Rodentians will throw grenades and try to swarm you with their numbers, while the regimented Pygarian’s use slower, deliberate slash attacks to catch you off guard.

The artwork and visual style of Omensight is becoming commonplace among indie titles, but that doesn’t mean it fails to impress. Colourful, storybook style locations filled with expertly crafted character models make for a delightful artistic treat. I truly enjoyed travelling to each different location to see how it was different from the last, and each one felt unique and offered its own flavour to the game. While it followed the trend that so many other fantasy games follow (snow, fire, forest, & stone areas), it didn’t detract from the experience at all. Of particular note is the final area of the game, which I won’t include images for due to spoilers, but trust me when I say it offers a real striking change to the game’s visual style. 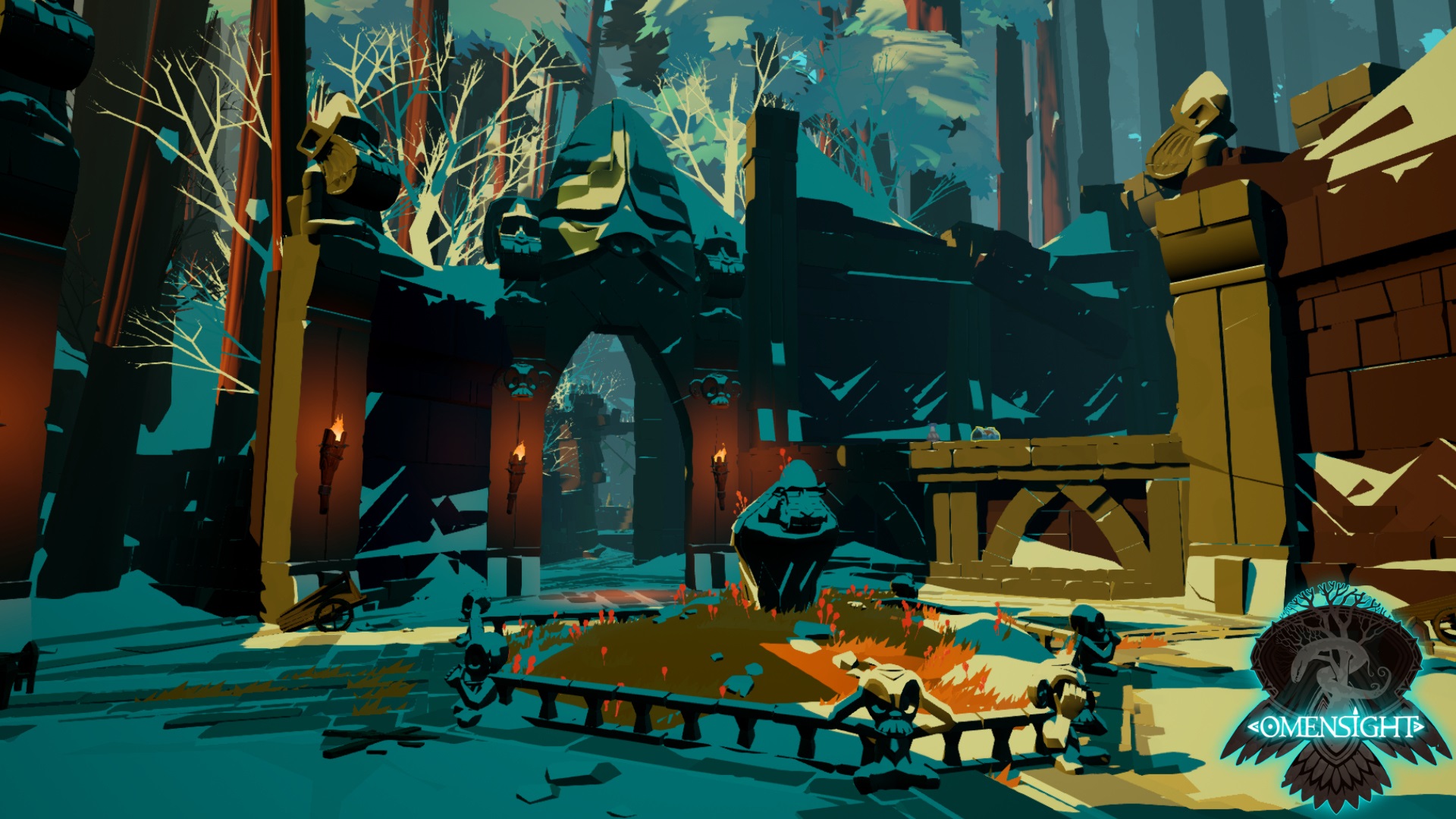 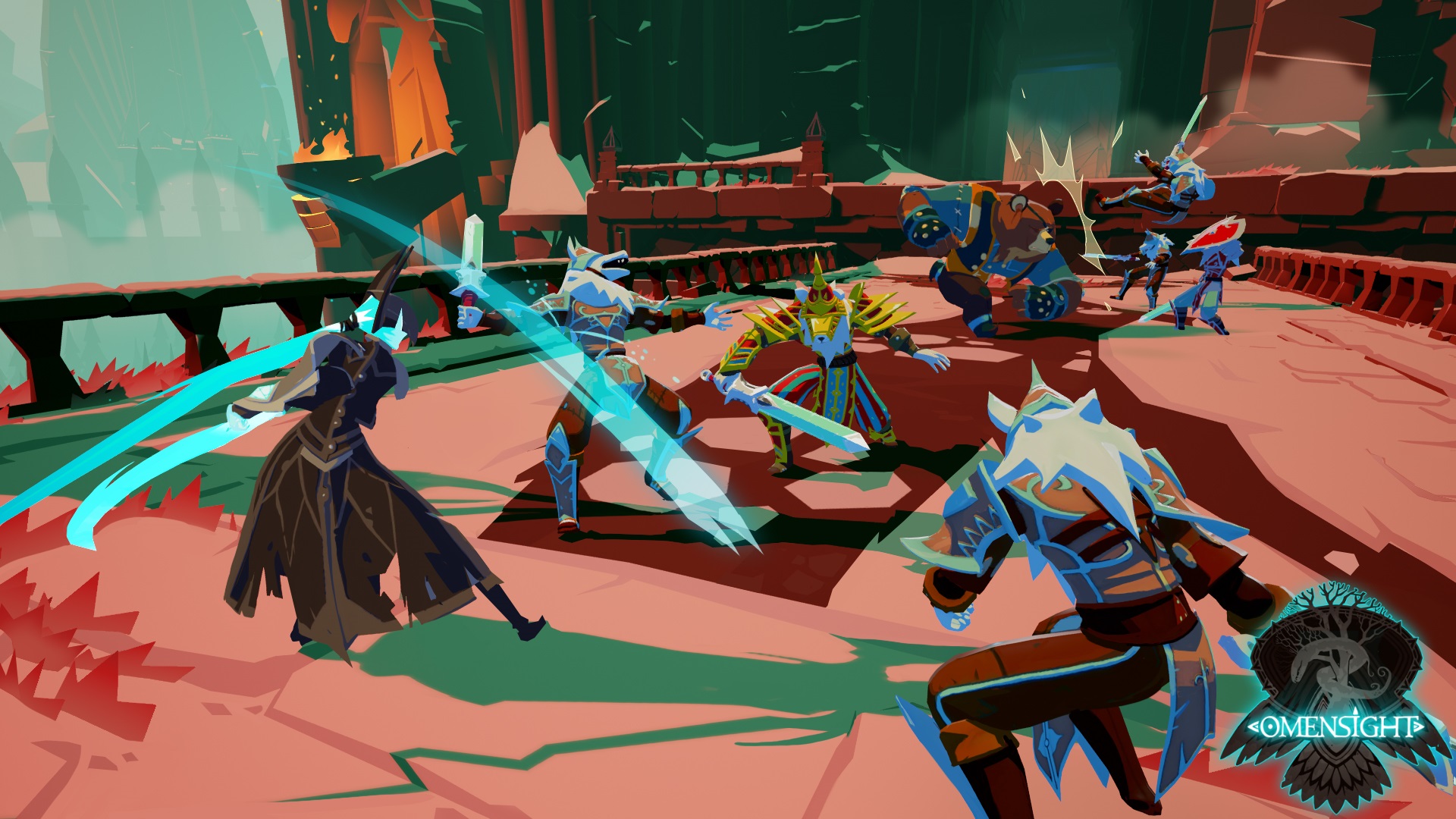 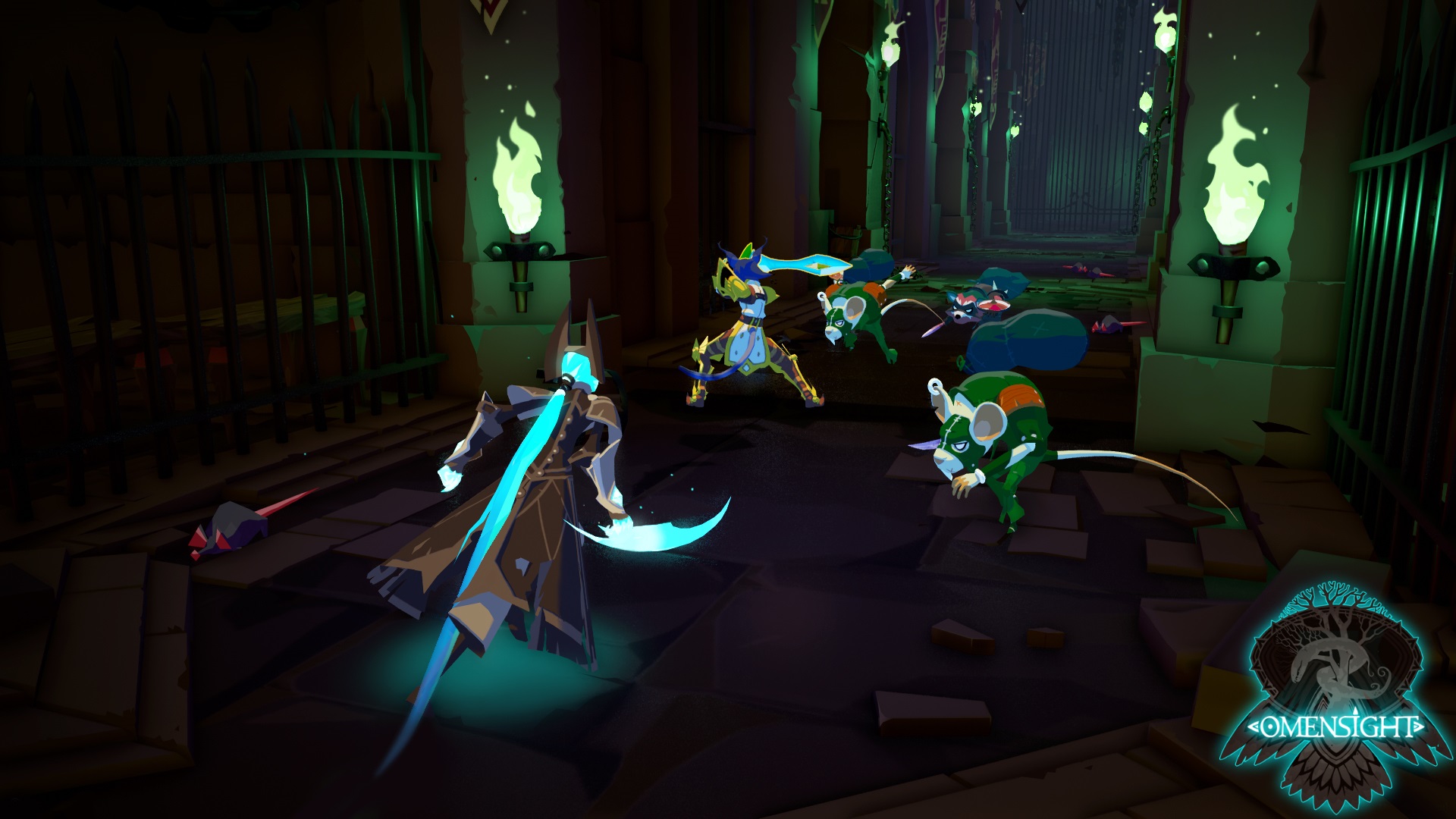 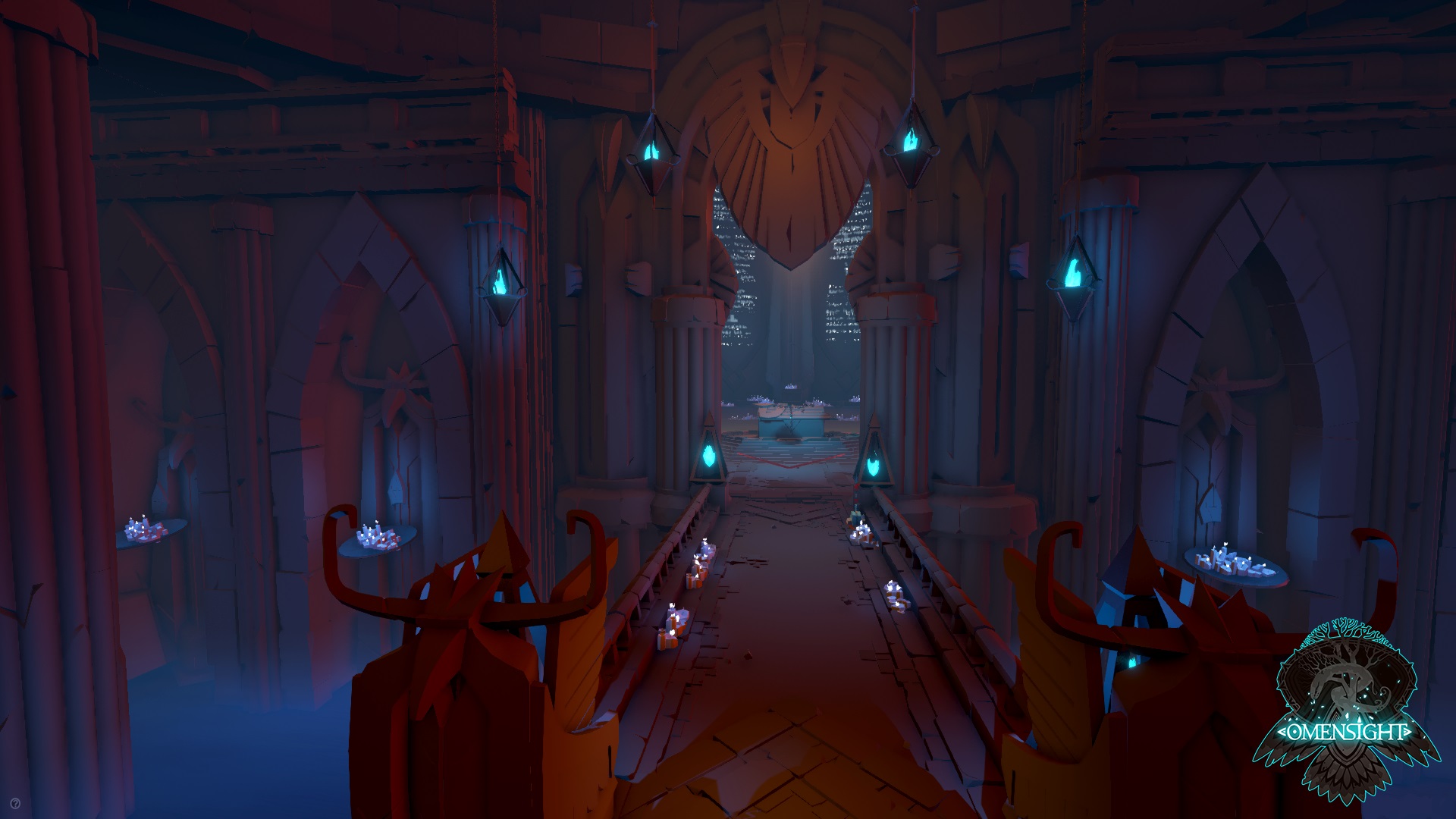 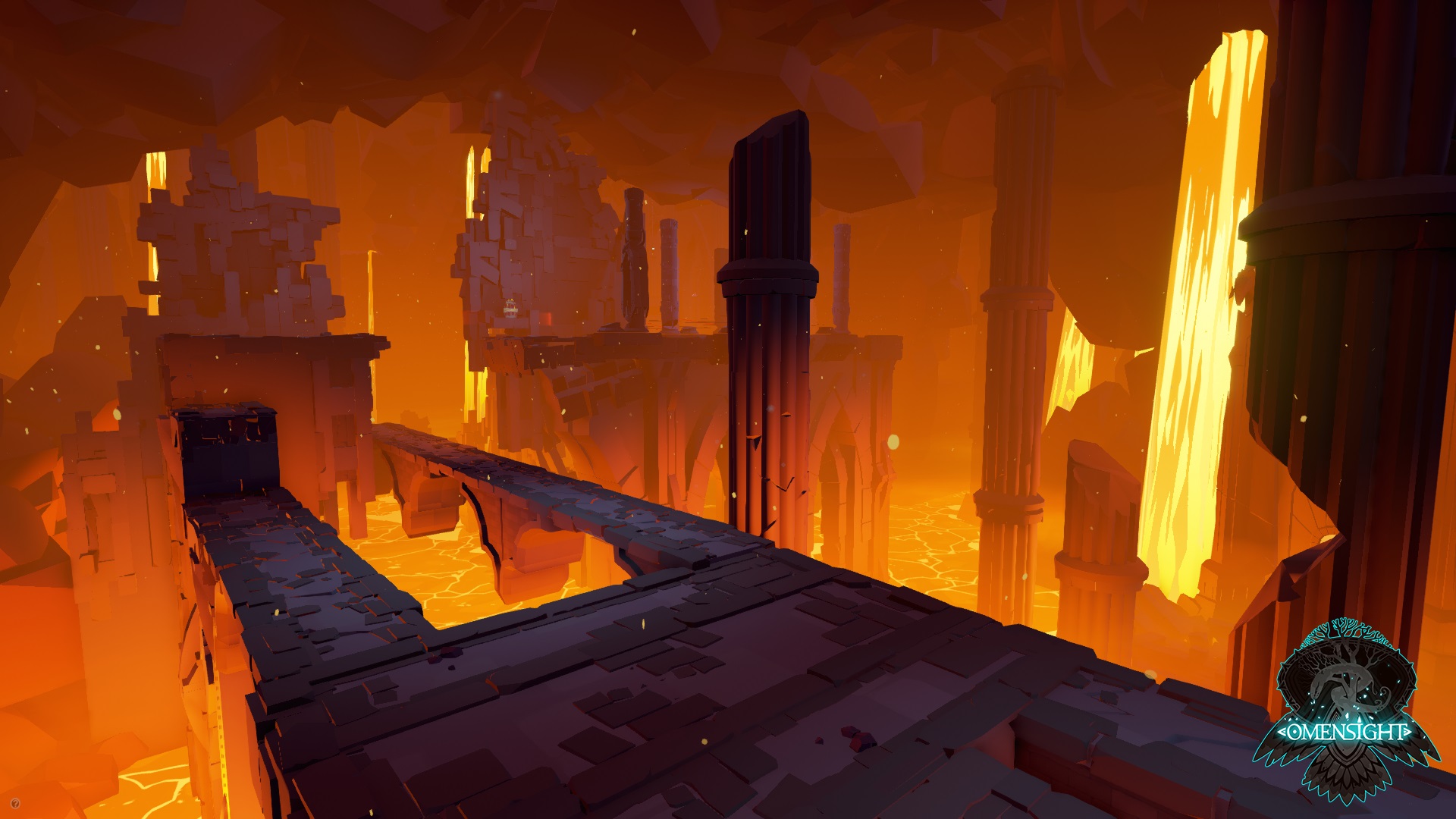 As can be expected, Omensight’s greatest downfall is the repetition. While the premise is solid, interesting, and initially engaging, after the 8th or 9th repeat I was starting to feel the drag. Yes, each time a little piece of the puzzle is revealed, however I don’t feel the puzzle needed to have as many pieces as it did. Just when you think you’re getting to the resolution, another thread opens up and the game pushes you to follow that. While in bigger budget games this might excite the player, the limited scope and systems of Omensight means opening more narrative threads leads to more repetitive gameplay. It didn’t completely ruin the experience, but certainly dragged it out too long.

Another glaring issue is the game’s employment of a fixed camera. The combat is constantly kneecapped by the camera’s static angles, meaning enemies are lost to the edges of the screen, items are left out of sight, doorways and treasures are missed… it just isn’t cool. Had the game committed to an isometric grid or something, then perhaps it wouldn’t be such an issue, but a fluid action game with a fixed camera is simply outdated.

Finally, the voice acting is simply terrible. Low quality mixing, poorly sourced talent, and flat delivery renders the voices of the game’s characters super cringe, and eventually I just skipped as much dialogue as I could before it drove me mad. Many of the game’s voiced sequences are too long as well, providing unnecessary prose and recapping events that happened seconds prior during gameplay. I don’t like to “hate” on things, but bad voice acting can put a sour taste in anyone’s mouth, and begs the question of whether it was worth the time and money to voice the characters at all.

I enjoyed my time with Omensight, but felt disappointed when the game stretched out too long and the gameplay became too shallow. Like butter over too much bread, the premise isn’t enough to carry over 12 – 15 hours of gameplay. The characters were fun, the combat satisfying, and the story was solid, but there was no real impact to drive the whole package home. I would recommend Omensight for those after something different from an indie developer, but temper those expectations so you don’t feel tempted to let Voden destroy Urralia.