Antigraviator Review – No such thing as too fast

Antigraviator is Cybernetic Walrus’ take on a fast-paced racing experience with anti-gravity mechanics. It’s being compared to Wipeout and F Zero, but those are some very big shoes to fill for a smaller development team. Luckily, it gets most of it right.

In the year 2210, scientific breakthroughs in anti-gravity and terraforming technology have resulted in the evolution of racing tournaments as we know it. Vessels now speed above the track’s surface, able to reach ridiculous speeds. Chaos reigns on the tracks with high-speed clashes and wipeouts  on every lap. While not exactly unique, this a comfortable and familiar setup and it certainly looks the part. Flashy speed effects really make you feel the velocity, and everything look s beautifully crisp on PC. It runs smoothly as well, which is a must for any high-speed racer.

Antigraviator is all about speed, even more so than your average racer. The game is fast, so fast that I wiped out within seconds. Bright orange pickups allow you to perform a boost, and are placed strategically around the track. You’ll need them, too, since the game doesn’t feature a drift boost. This confused me, seeing as how the main mechanics are centered around boosting. The air brake that is available slows you down, which feels less satisfying than if I had a chance to actually increase my speed using sharp turns. 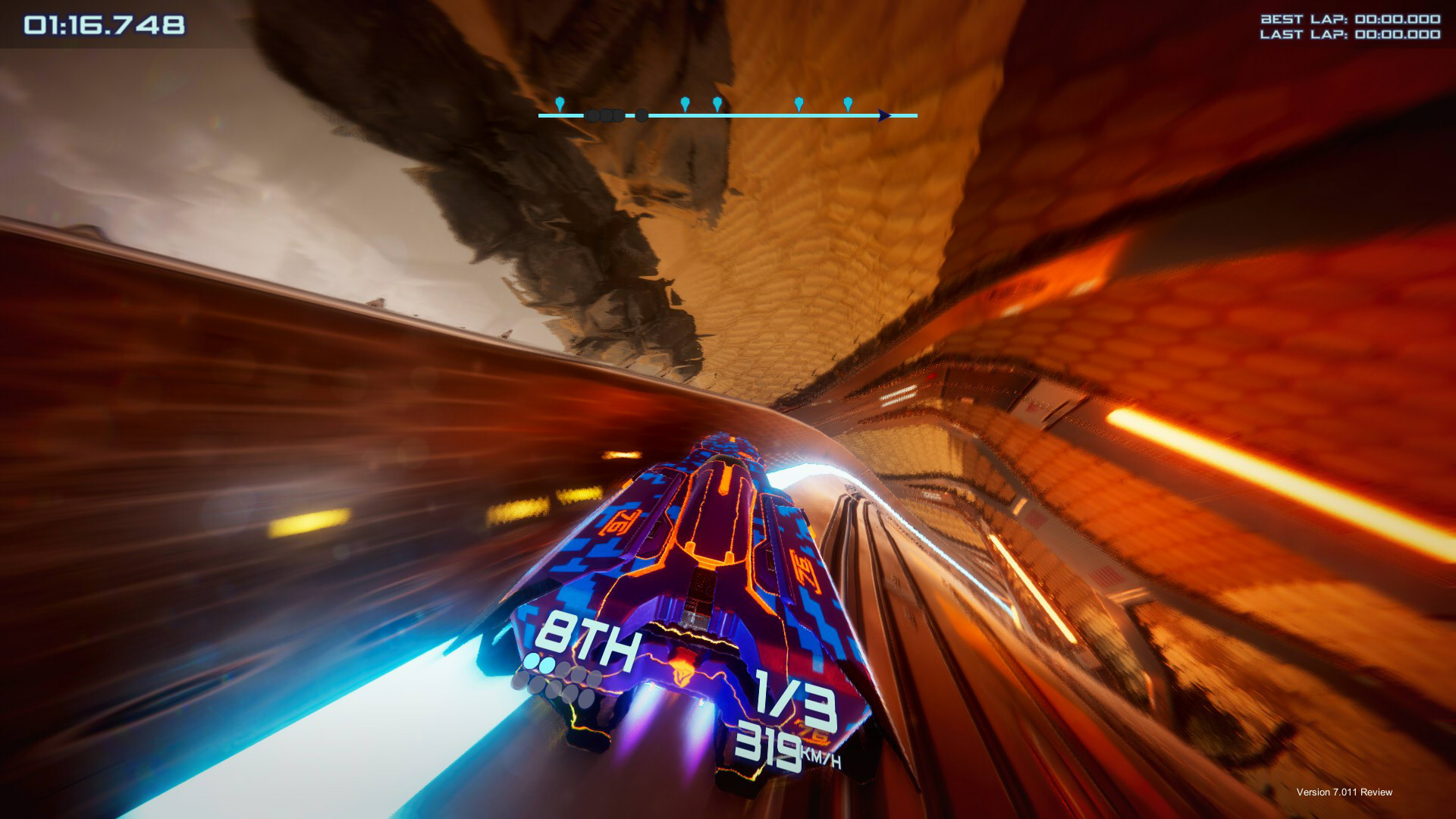 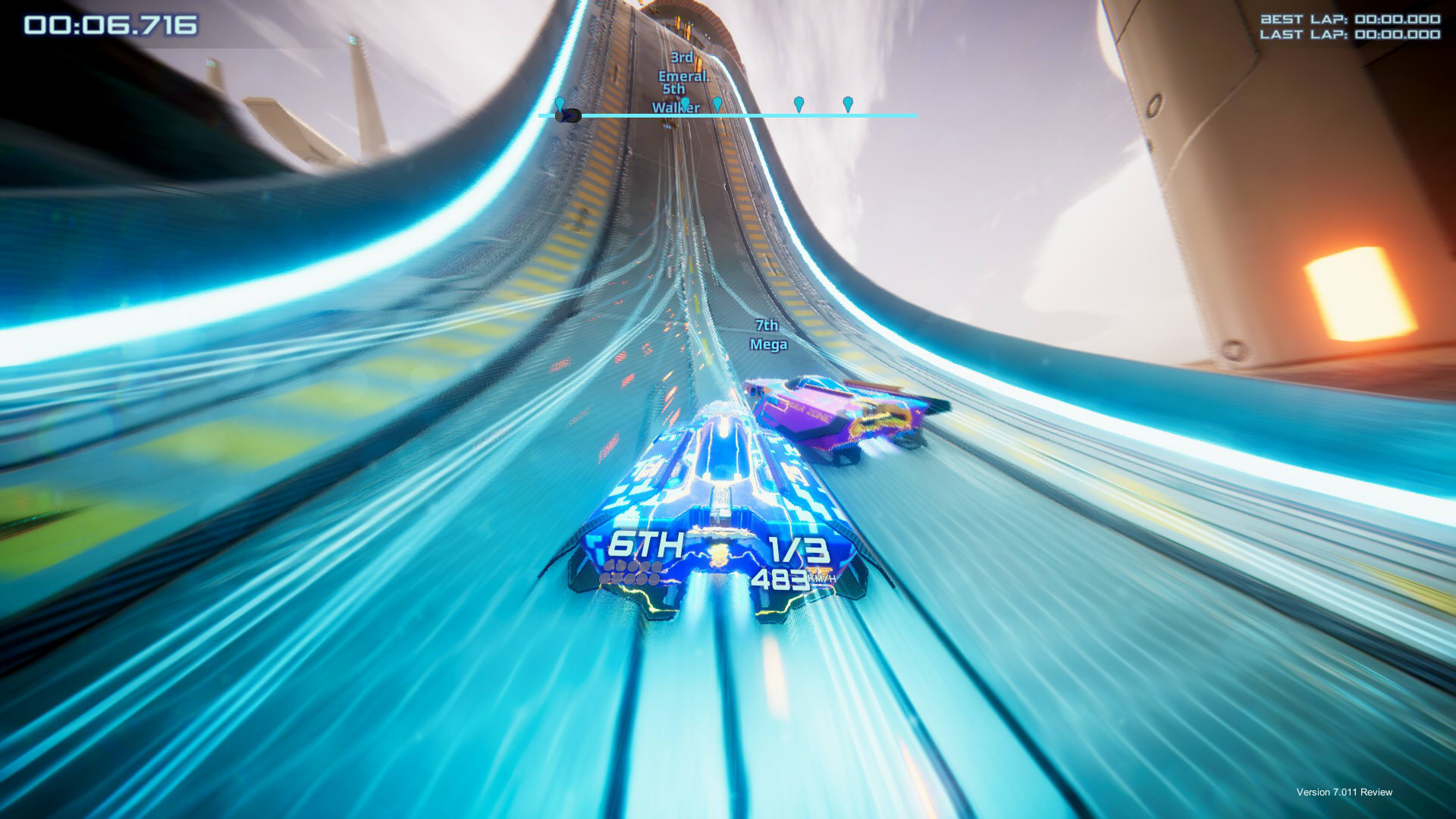 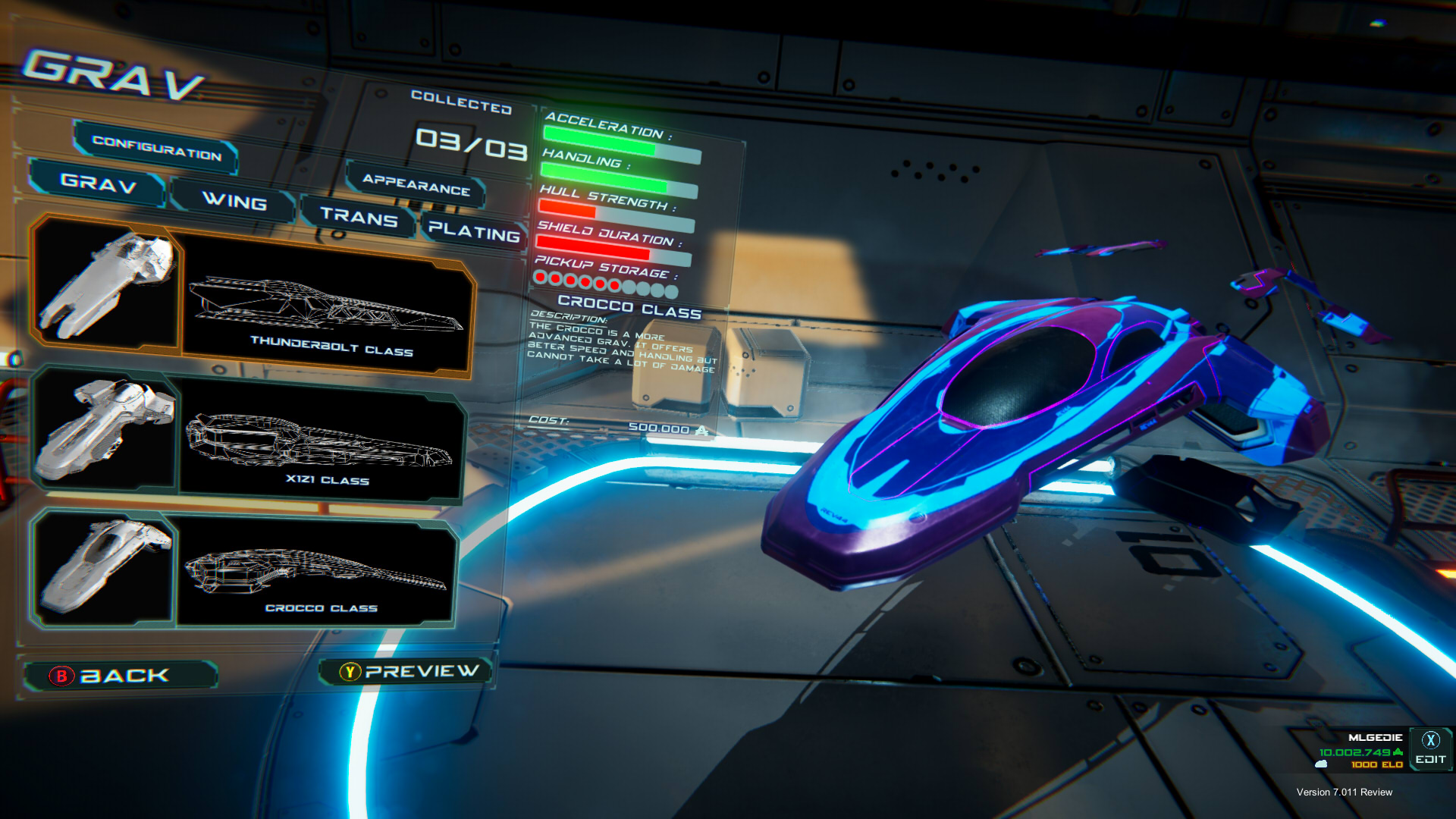 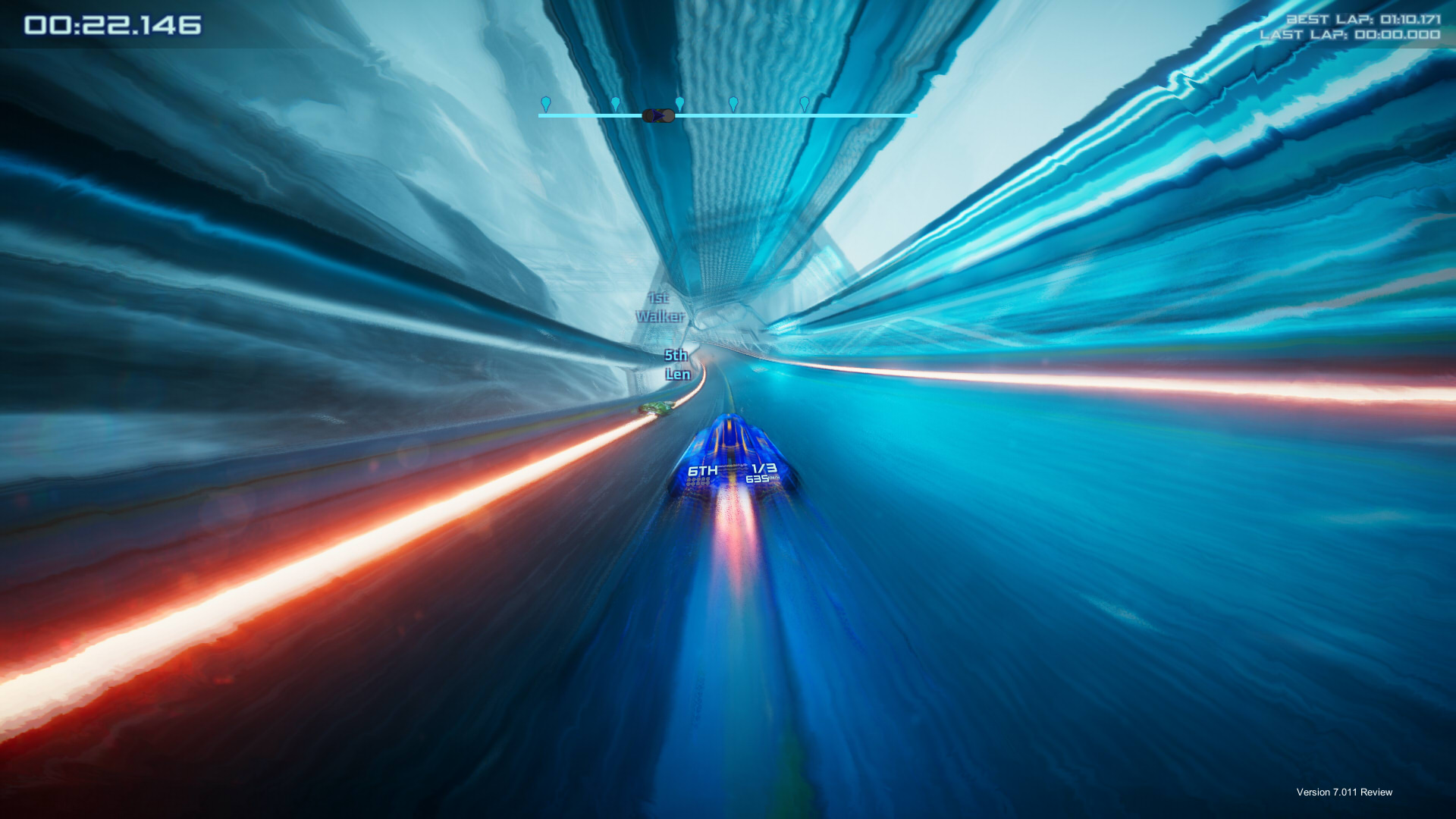 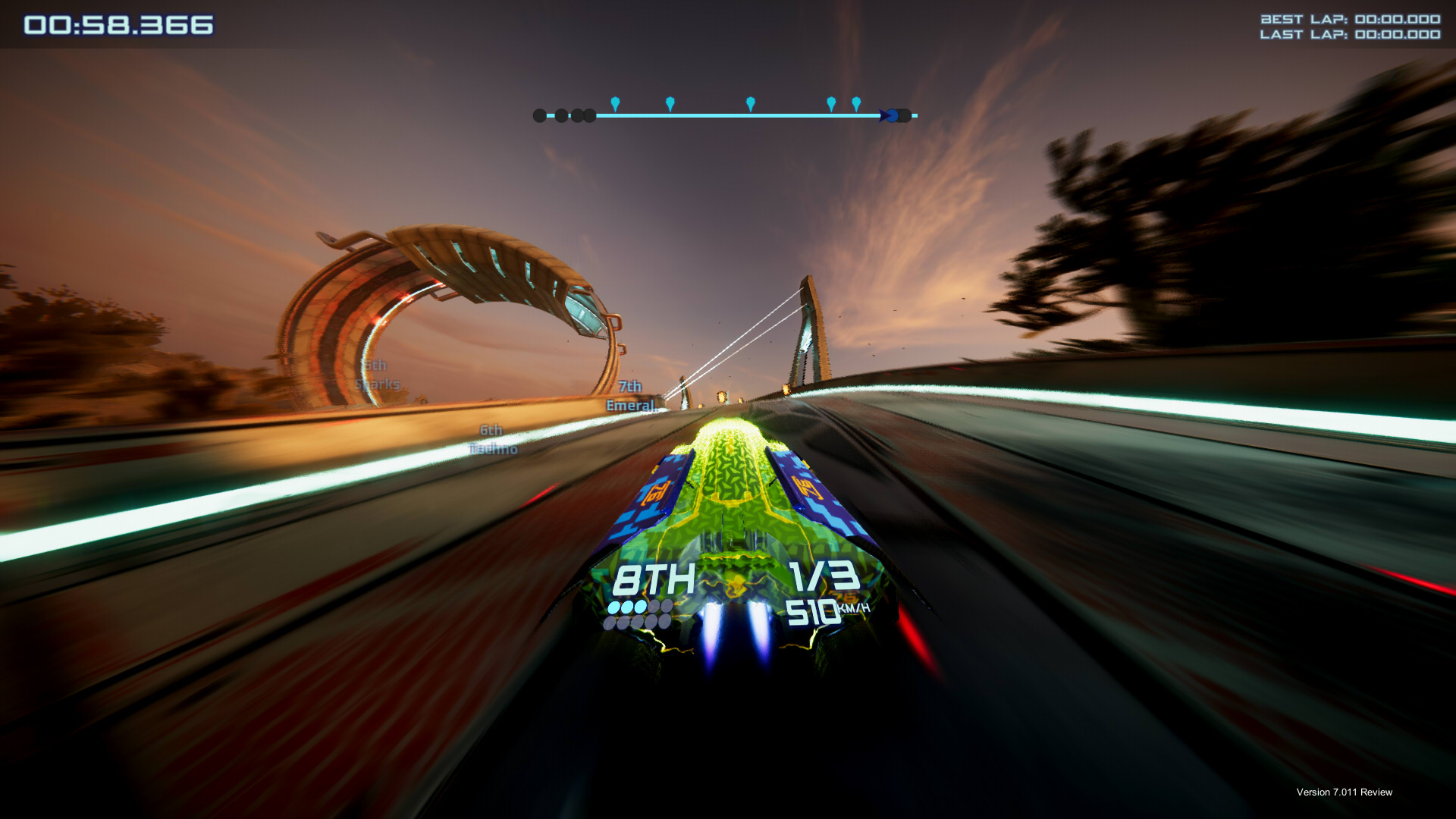 Getting better at the game feels natural and rewarding. Knowing the tracks is half the battle, and there are lots of interesting locations to visit including a snowy pole, a futuristic city, and even space. The AI is challenging enough to feel great when I finally won a campaign after multiple tries. You can use your winnings from races to purchase different parts to customise your car, however I was a little disappointed with the lack of options. There are only 3 choices for each customisable part of your car, and no secret ones to unlock for completing campaigns.

The campaign mode is a decent length, with 5 leagues of varying difficulties. Winning first place will unlock the next league, something that didn’t happen for me for a good hour as I learned the controls. I quickly climbed the rankings but never felt like the game was too easy or too difficult. In the beginning it was a little tedious: while the Novice League is free to enter, all the others require an entry fee of your precious credits. And since the higher difficulties are locked until you achieve 1st place in the previous cup, I found myself replaying the Novice League multiple times.

On its Steam page you’ll see that it advertises ‘no speed limit’, but as it turns out this is only referring to boosts. Consecutive boosting doesn’t have a cap, but you’ll never get to enjoy the benefits of that. The map design often contains too many twists and turns for anyone to really overclock the speedometer. The vast majority of Antigraviator’s 15 unique tracks keep you boxed between walls, meaning reaching infinite speed would be nigh impossible. The few times a track did venture into an open space or a circular tunnel, there wasn’t much incentive to drive up the walls since pickups and boost pads stayed mostly on the most straightforward path. For a game with “Antigrav” in its name, this really feels like a missed opportunity to really stretch the limits of what we know the genre to be.

There are no items or weapons to be picked up in Antigraviator. Instead, you can active an environmental trap at set locations around the track. These take the form of roadblocks, rocks, and a variety of other hazards. This is a nice change from the usual array of zany weapons, but I wish it were utilised a little better. You can only activate them at a certain section of the track, indicated by blue markers on your screen.  If you’re not paying attention to the trap markers, the only other indication is a voice announcement that runs for longer than most traps are available for. This feels like an oversight, and a largely annoying one since you expect that you can still launch a trap if the announcement is still playing.

You’ll know when you hit another racer with a trap if your car glows green, shielding you in turn from traps. I would have liked some better audio-visual feedback, as I’m used to my video games rewarding me with flashy lights and sound effects instead of a slightly monotonous announcement.

There’s one more thing I want to touch on, and that’s the unique placement of your heads-up display. Your boost level, speed, lap count, and current place are all attached to the back of your vehicle. I can see what they were going for and I applaud them for the creative idea, but all it did was cause problems for me. The information moves with your car, meaning it’s never in the same place for long. This is information that really needs to be in the same place at all times, so that a player can use their peripheral vision to keep track of their boosts and placement. Now, not only is the information weaving around the screen, but it’s on the back of your visually busy car. Having to tear your eyes away from the front of the road resulted in many a crash that I would have avoided had the information I needed just been plainly accessible at a corner of the screen.

The developers are keeping its price a secret until launch, so it’s tough to say whether it’ll be worth your money. Don’t be too stingy though! Antigraviator probably won’t replace Wipeout in your heart, but it’ll keep you well entertained until the next installment. What it does is enjoyable, and something I could really see myself striving to get better at, but in the face of titles like Wipeout and F Zero it doesn’t dip very deep beneath the surface of the anti-gravity genre. At the end of the day though, the problems I had weren’t enough to detract from the fun I had.