Cultist Simulator Review – A fresh take on an ancient evil

Fans of text based adventures that toy with the darkness beyond the veil will surely be familiar with Fallen London from Failbetter Games, if not your surely familiar with the Sunless Sea from the same studio. The thing that ties these two games together is basic gameplay partnered with some unnervingly good narrative and story telling. Well lead creator of those titles, Alexis Kennedy, has launched his next project with the brand new two person studio Weather Factory. I’m sure this will be a much brighter and happier narrative from the creator—oh no wait, the game is called Cultist Simulator  so I’m sure that paints a clear picture about the experience in store for you.

Cultist Simulator sets itself in 1920’s London, but things are exactly as we know them. You play a variety of characters over time as you begin to prod at the edge of reality and come into contact with something you don’t get to experience every other day. However while this does keep the narrative text based gameplay that Alexis Kennedy is becoming known for the core mechanics of the game aren’t something that you would necessarily tie to the subject matter. That’s because at the base of this level is a complex card game based around strategic use of resources while building a world with a cryptic narrative.

When Cultist Simulator loads you’re presented with you playing board, it is sleek and simple and your first cards will be laid out ahead of you. Along with your cards tiles will begin to appear, these tiles yearn for you to place a card in them, so much so that some will begin to steal your cards from your deck to fulfil their purpose and this is where your resource management will begin. You, are a frail human and with that comes a frail human body that you need to keep running if you’re to peer behind the veil. This means making an income, you might be cleric, a physical labourer or maybe a painter barely making ends meat, that income is going to keep getting sucked away so you’ll need to make sure you are earning it.

Problem is, you’re going to fail. You will die, your body will give out on you and you really can’t avoid it. However this is where the game begins. Because while being a card game Cultist Simulator also operates as a Rogue-Lite and each death opens up the path ahead of you. This is added by the fact that this is a game of trial and error, collecting curious items, companions, locations and the like you will play with how you use them and approach everything in new and interesting ways. You have been given a digital chemistry set and it’s up to you to mix the ingredients to create narrative gold or end up slipping beneath the surface of reality into the abyss.

“Problem is, you’re going to fail. You will die, your body will give out on you and you really can’t avoid it. However this is where the game begins.”

This repetition works in the games favour and at its detriment. You’ll become skilled at making the quick decisions required to survive but you will become a little to familiar in the early stages of each life and as such can begin to autopilot. It’s also very important to remember the pause button exists and you are not penalised for using it because sometimes you need a moment to take in all of the fragments of the story in front of you. This lets you take in the narrative but also plan your next move.

Thankfully the art style for Cultist Simulator is very basic and is much more about the graphic nature of the icons. This means that a board full of cards is never over burdened with busy artwork and cards are quickly recognisable for their use. Occasionally certain card combinations will trigger inked images to sprawl across the board. These glimpses into the world give you a scope of your existence but still with a sense of other worldly dread like you are detached from the world you inhabit.

As you get into a rhythm and the mysterious story unravels before you it is easy to find yourself looking up after you promised yourself “five more minutes” to discover an hour has passed. This game is certainly niche, that can’t be ignored but I also feel it is very easy to write off because of the card game style and paired back art direction. Problem is that is before people realise the heavy focus on world building and narrative put into this. 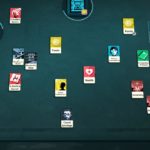 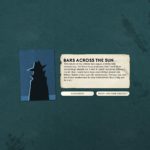 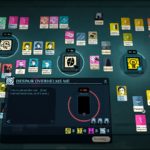 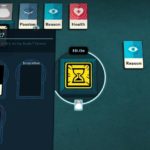 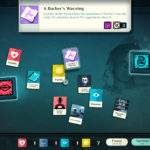 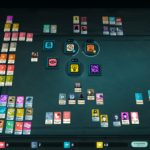 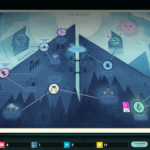 Games like Cultist Simulator can be instantly alienating to the gaming community, a new-ish idea that throws you in the deep end and watches you sink before throwing you in again. A clash between text nuanced narrative and game play that can feel like your playing against a ticking clock leaves you at odds with your own anxiety. However if the writing wasn’t as strong as it was I think this game would have failed, instead it spins an intriguing story that has you trying to delve that little bit further into the darkness with each new life you begin.