Look I might be biased so let’s get that out of the way first, Jurassic Park is in my top 5 films of all time. So when word of a park simulator from the franchise was hinted at I couldn’t wait for the chance to right the wrongs of John Hammond, like seriously why were your grandchildren there mate? Jurassic World Evolution gives you that opportunity and has you as the new director as you attempt to revive the dinosaur menagerie for science, and so little Timmy can watch a T-Rex eat a goat.

Theme park simulators aren’t anything new to gaming, I remember playing hours on end of the original Rollercoaster Tycoon. Keeping all those tiny people amused brought me joy and creating an amazing park gave me a sense of accomplishment. Eventually in all theme park creators lives though we can’t help but end our terribly exciting rollercoaster with a sudden stop that hurls guests flying across the air. This takes some creative use of the tools at hand, Jurassic World Evolution however opts to skip that step and arms you with the deadliest attractions this side of that one rickety rollercoaster at Luna Park.

Jurassic World Evolution starts off quite easily, you will be dropped into the first of the five Muertes islands that the original sequels introduced. As the environment loads you’re greeted by Jeff Goldblum’s calming voice mulling over chaos theory and about life, uh… finding a way. Doctor Ian Malcolm will appear a couple more times to let you know he’s worried about basically everything you’re doing but you will be spending more time with the department heads of the three pillars of the park that are vying for your attention.

These departments are science, entertainment and security and they cover the kind of things you’d expect—we’re not reinventing the wheel here folks. There are a couple of other reappearing characters from Jurassic World with Bryce Dallas Howard and B. D. Wong providing their characters voices. In a shocking twist, read as not a shock at all, Chris Pratt did not return to do Owen’s voice since I guess video games are beneath him these days. 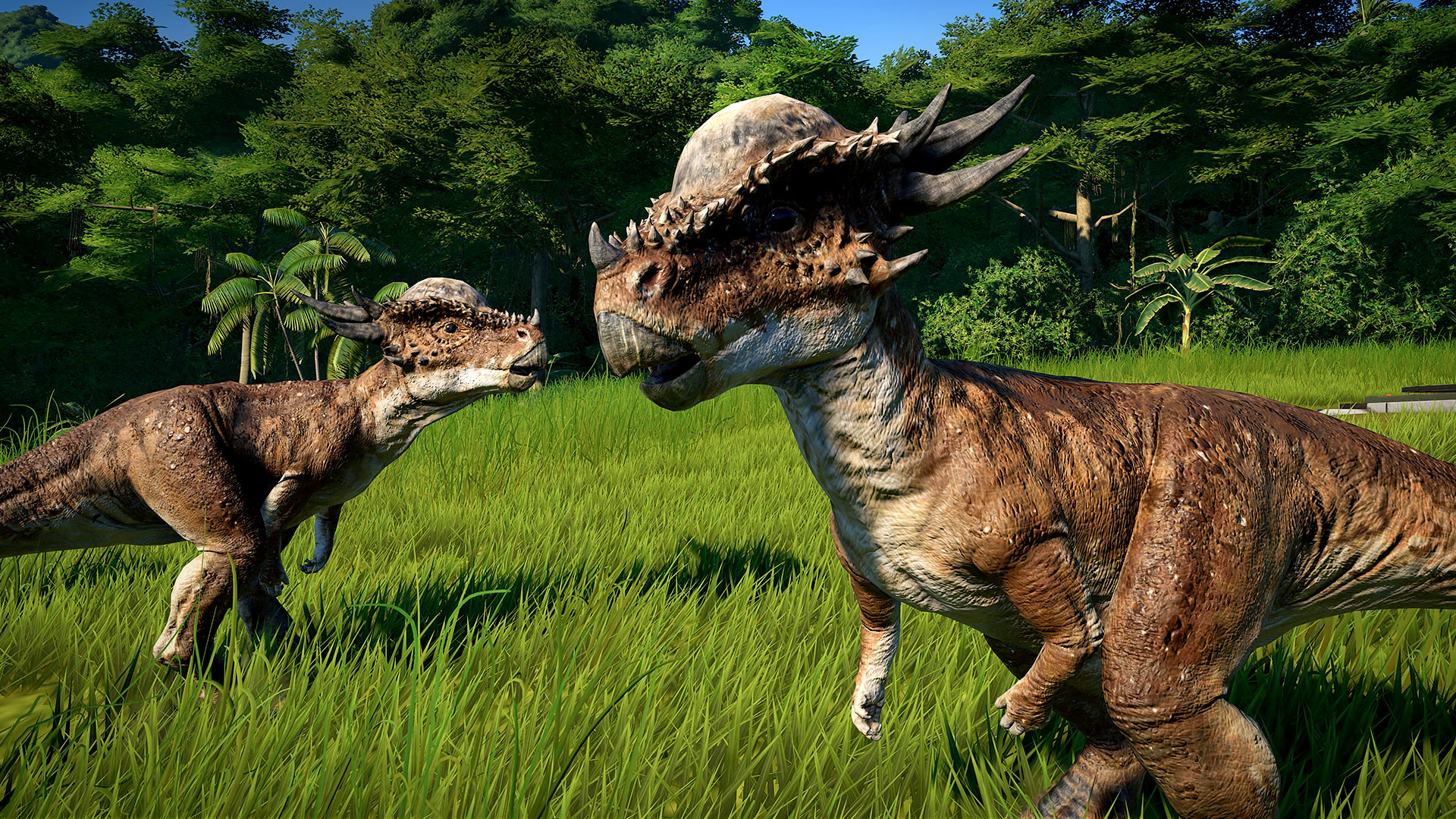 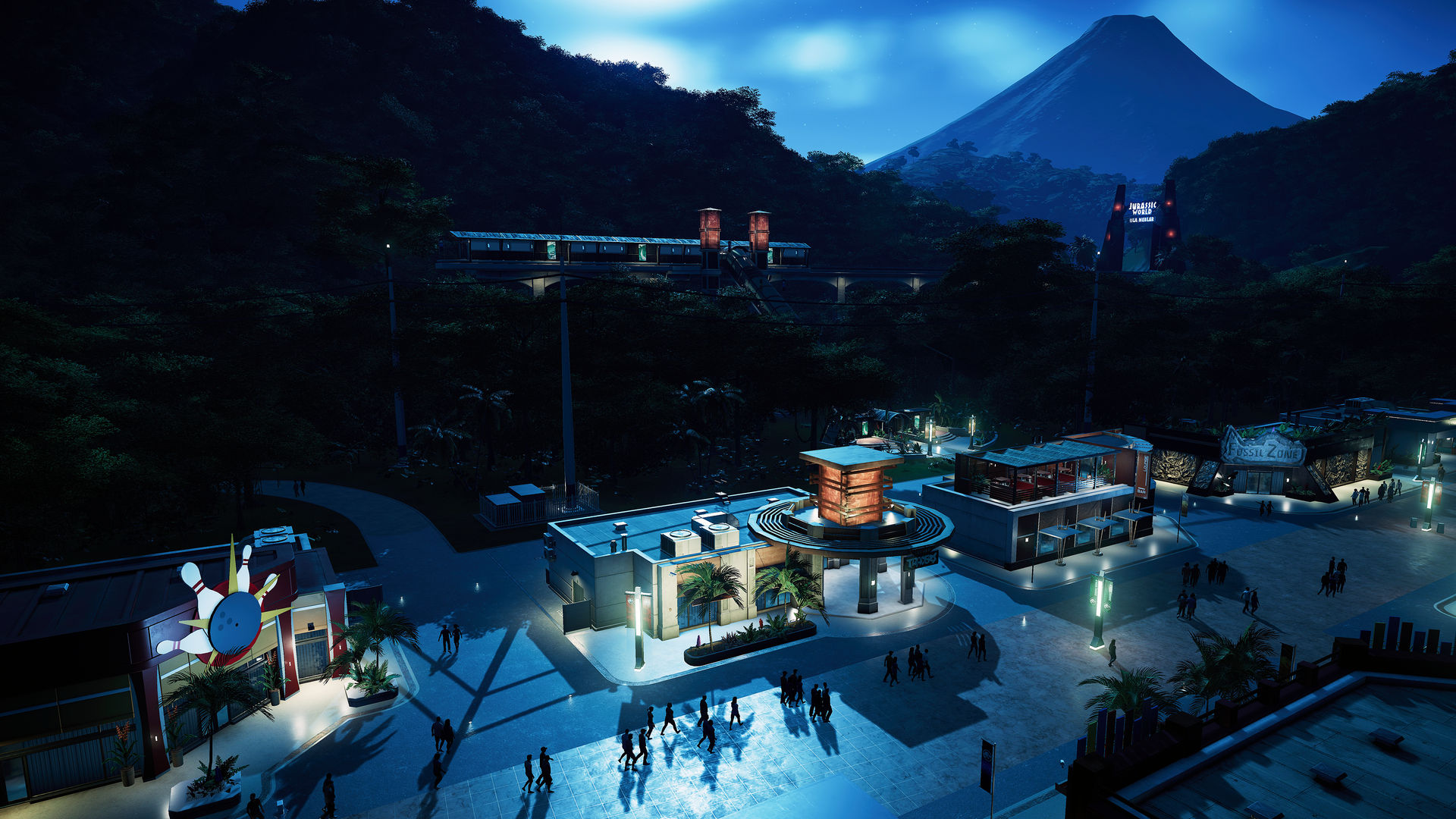 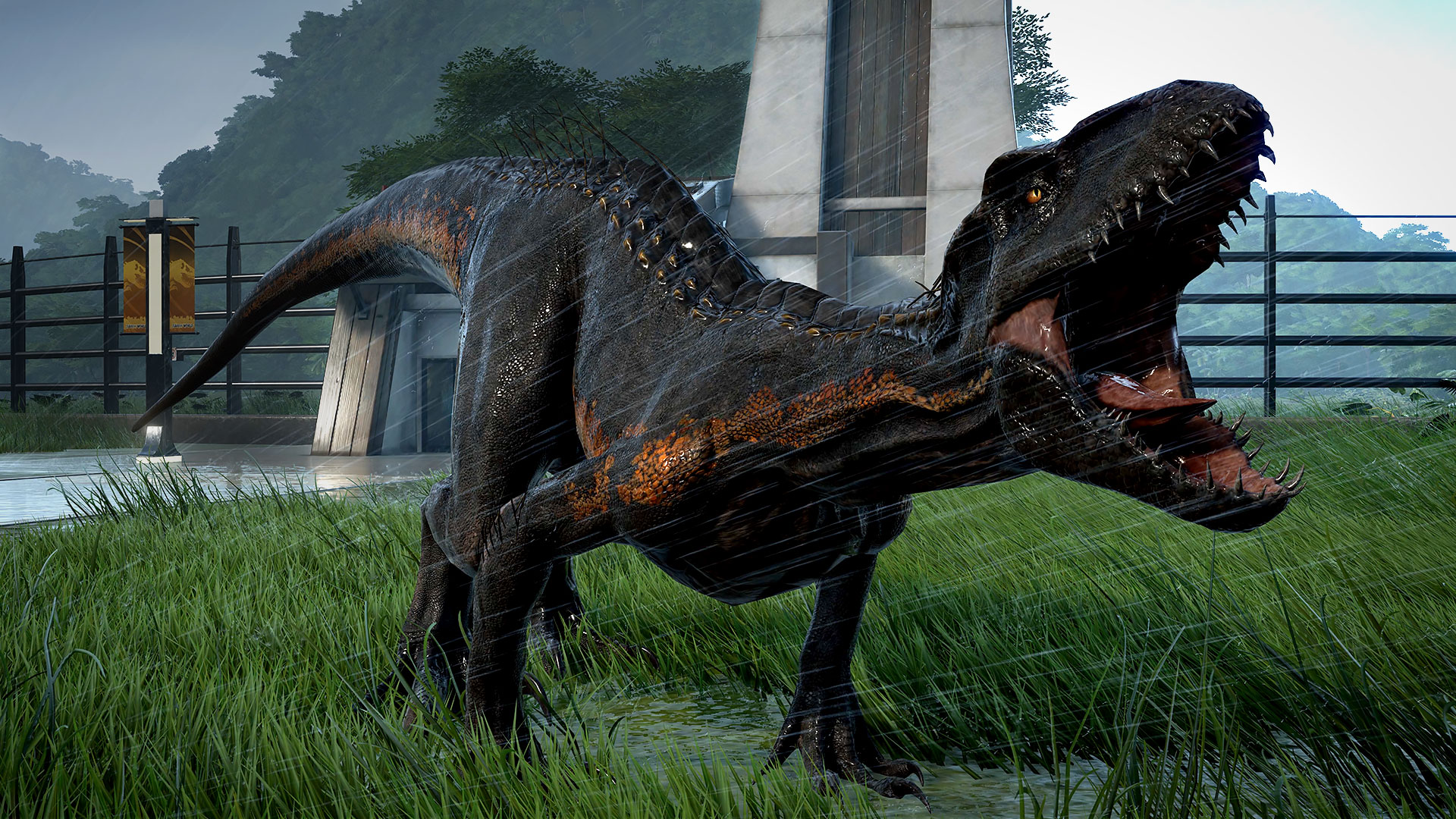 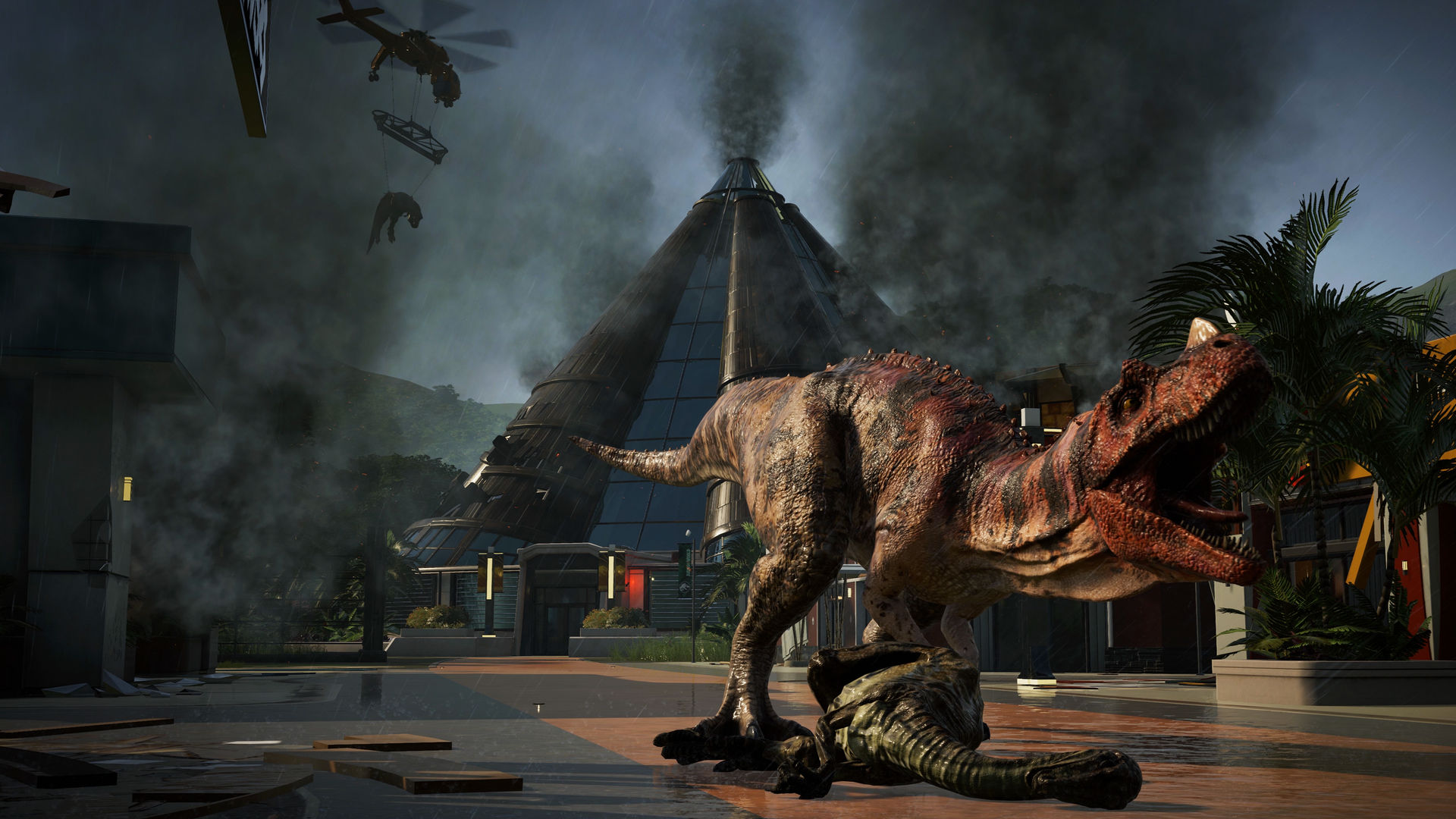 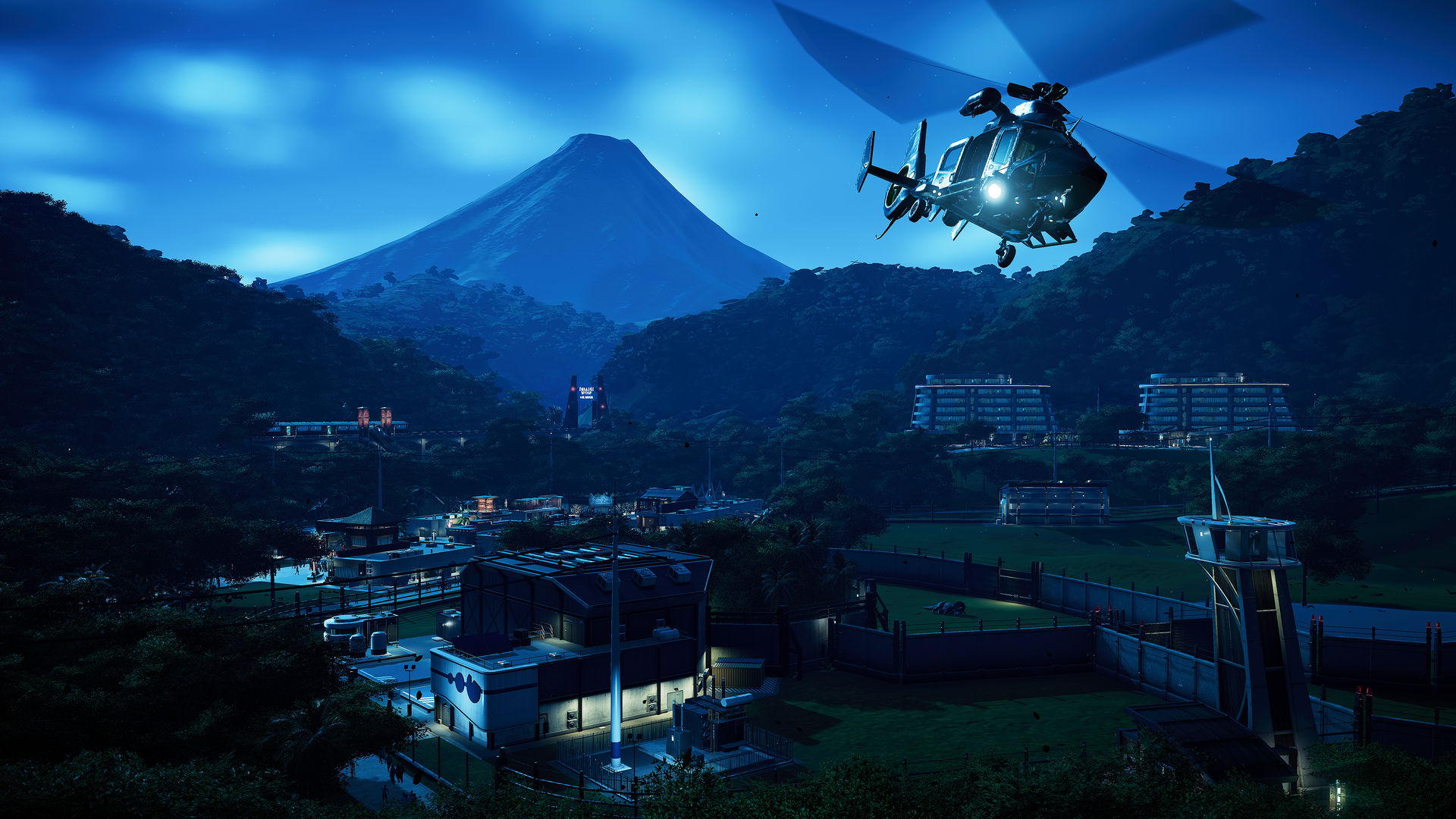 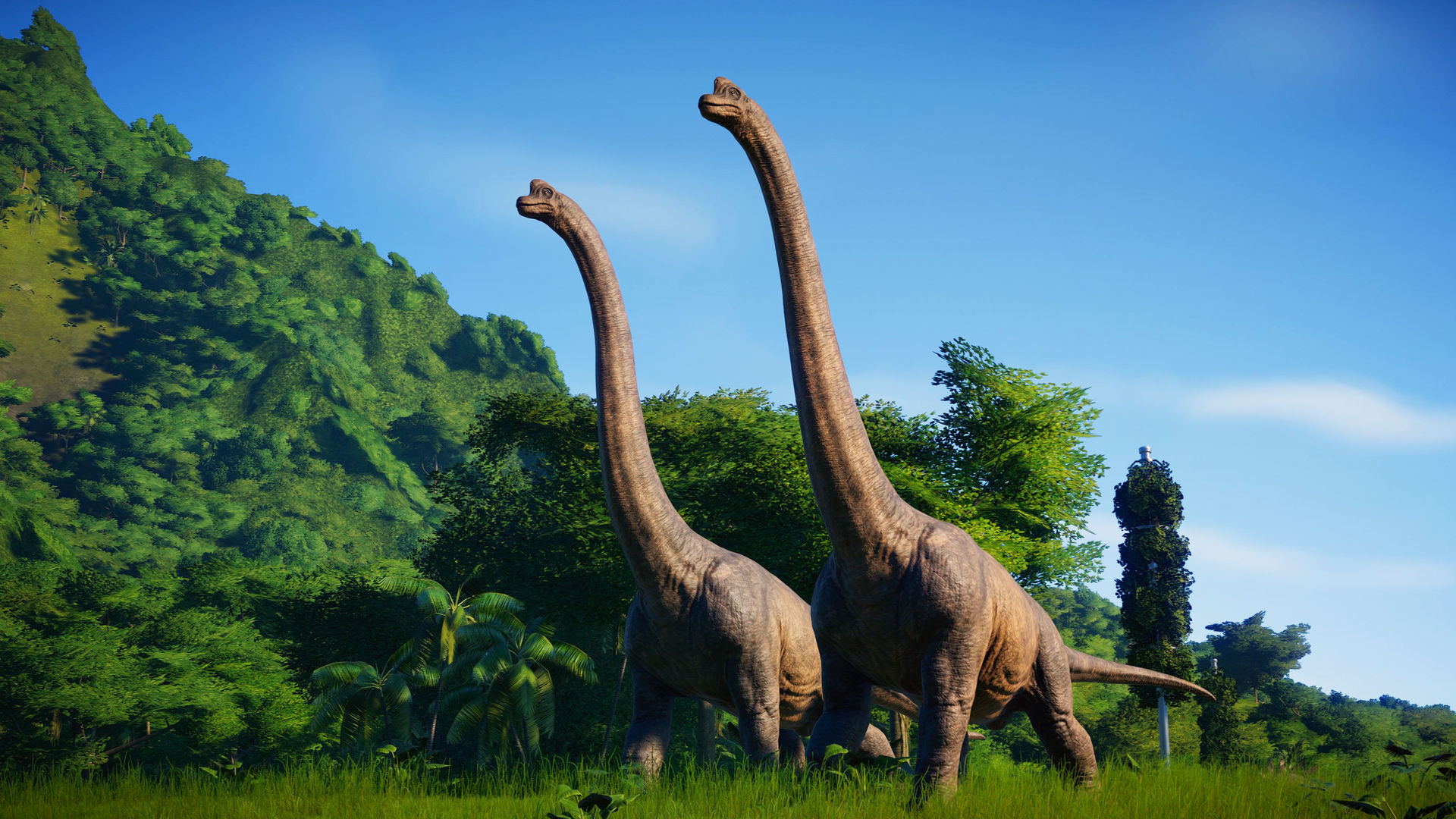 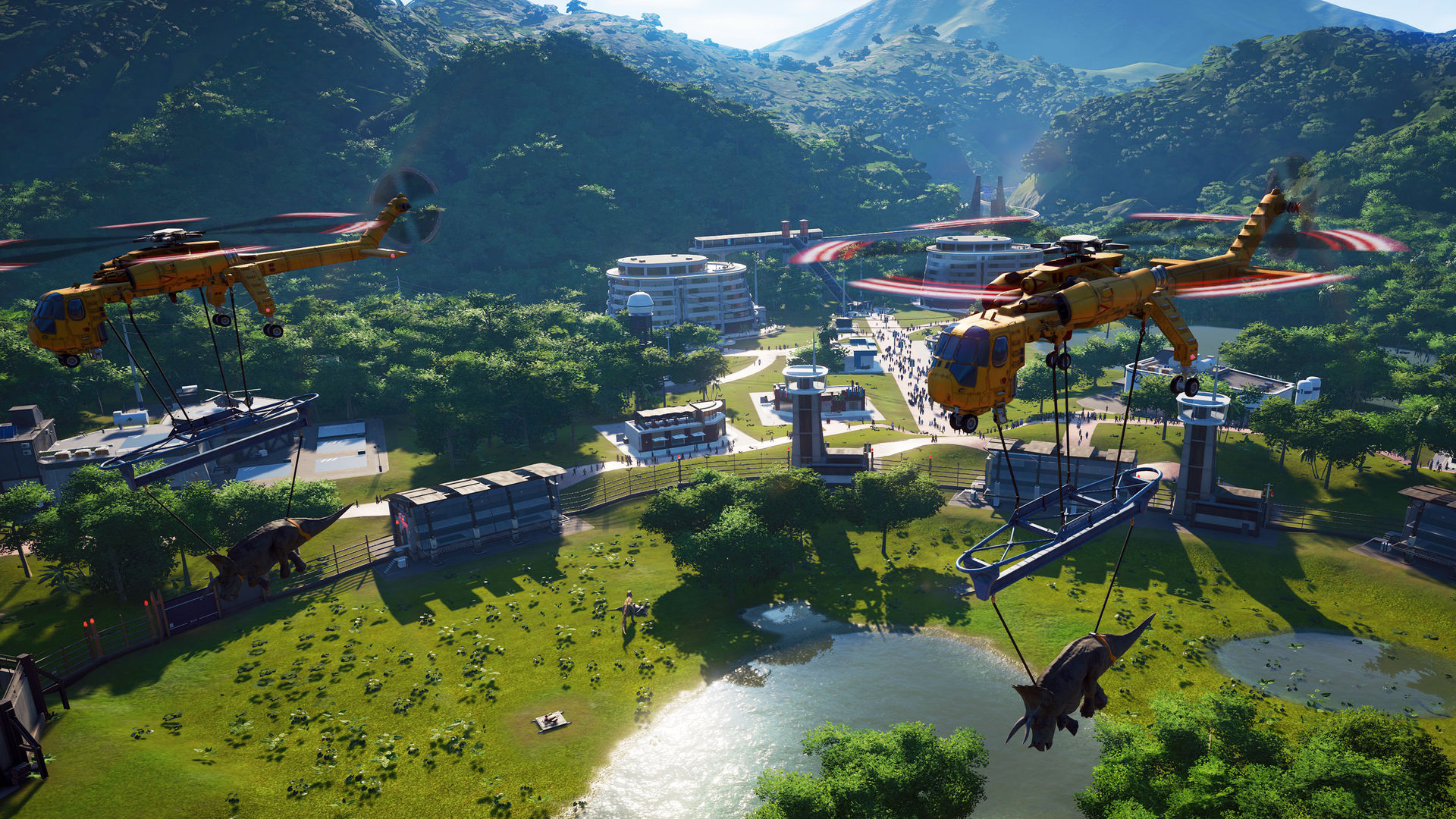 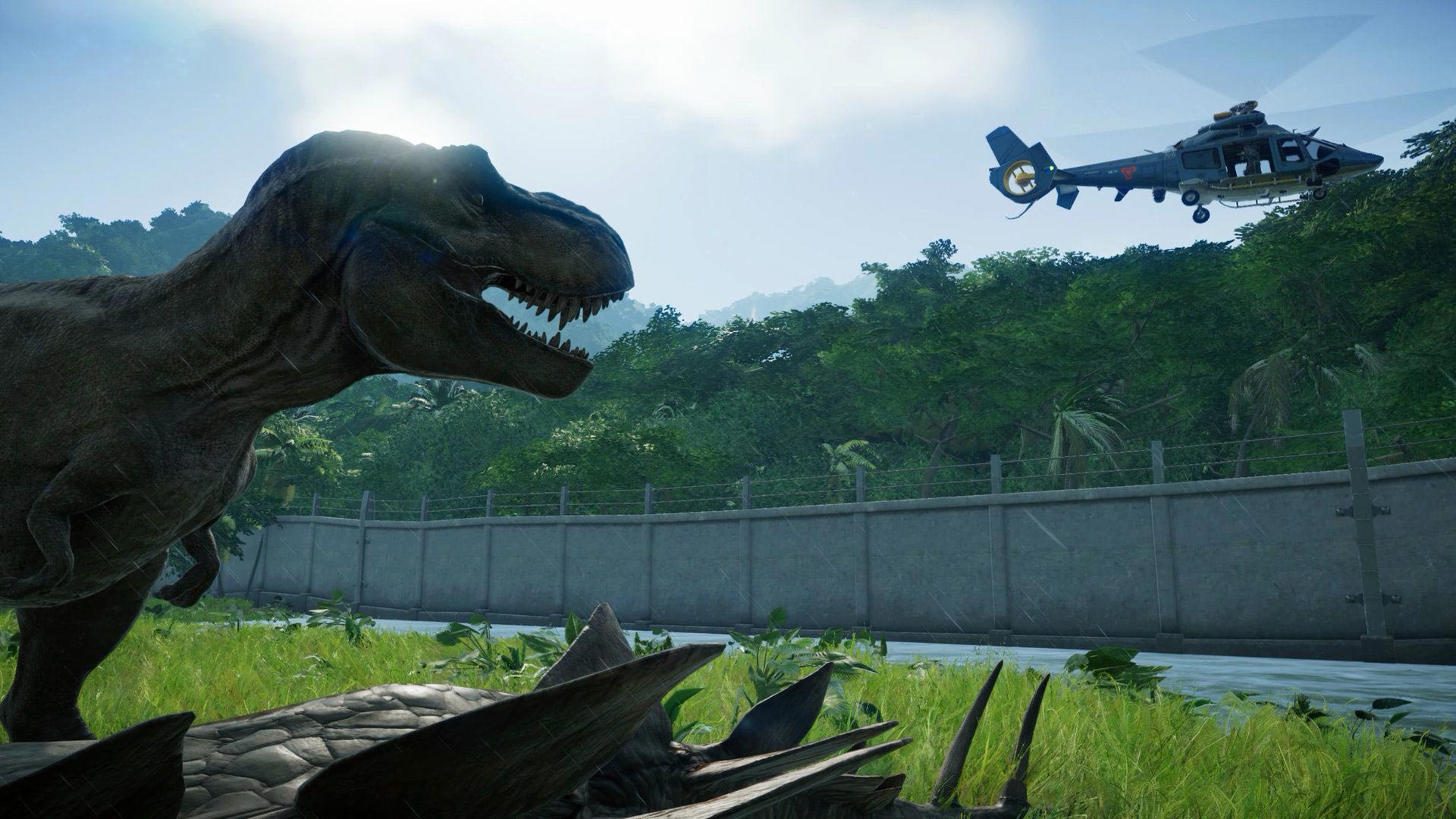 The key focus for you in Jurassic World Evolution is to achieve success with your park, this is done by building it’s reputation by wowing guests and reaching new scientific heights. As you achieve this reputation you’ll unlock the next of the five islands with each island presenting new challenges for you to overcome, cramped conditions, tropical storms, and so on. On each island you’ll be given missions by each department that will reward you with currency but also alter your standing with the three departments. You help security and entertainment doesn’t like that, maybe next time science won’t—standard stuff.

It will be important to never let one department drop to low as an angry department can create disenfranchised workers who can sabotage your park, if you’ve seen the first film you’ll know why that is a bad thing. As you raise their standing each department will also present you with a longer quest for each island and what this does is place you right into the middle of the action while also acting as a less intrusive tutorial.

These five islands take you around 20 hours to play through and once you’ve complete the five locations the final sandbox location opens up and you have access to Isla Nublar, the iconic island that the original Jurassic Park took place. Some may not like a simulator locking it’s sandbox behind these more constricting missions but in reality these take the time to teach you what you’ll be doing before dumping you into a sandbox and watching you drown.

You’ll learn to build pens for your attractions, control your energy grid, shepherd your guests around the park and manage your ranger team. To add to your enjoyment you don’t just have to point your rangers at their next task and say go but you’ll also be able to get behind the wheel yourself. Whether it be in a very recognisable Jurassic Park jeep or the cockpit of a helicopter you’ll be able to drive around your park, entering enclosures to refill feeding stations, repair damaged fences or look down the scope of a rifle to administer medication or sedative. I won’t lie doing laps in the jeep with a T-Rex nearby is just… it’s just fun guys.

But park maintenance aside you are here for one things and one thing only in Jurassic World Evolution, the dinosaurs. You’ll gather new dinosaurs by sending dig teams to uncover fossils and you’ll then use those fossils to extract DNA. Once you have enough of a DNA strain you’ll be able to incubate them into your park, the higher the rating of the DNA strand the stronger the breed. Once the incubation is done you’ll get a 5 second cut-scene as you release each dinosaur.

The fact that I never skipped one of these cut-scenes, even though you can, speaks volumes about the strengths of this game. Watching these extinct creatures taking their first steps and then running around is intoxicating, even better if you have one from the same species it will come over and greet it and sometimes they’ll run off together. Just by clicking on one of the dinosaurs the camera will zoom in to great detail and follow the little critter as it darts around, I lost a fair amount of time just watching my creations enjoying their surroundings.

“…dinosaurs will become distressed and that usually ends with dead guests, although when a raptor kills a guest their comfort level goes up… creepy.”

The amount of detail put into each creature shows a real passion for what the team have created, they all move differently and have varying behaviours. These behaviours are important to learn, some like lots of open grass lands and only a small amount of trees, while others like lots of foliage. Each dinosaur has a limit for how many of it’s own species it mingles with but also other species and all of these variables will effect their comfort level. You will need to manage their comfort level effectively or your dinosaurs will become distressed and that usually ends with dead guests, although when a raptor kills a guest their comfort level goes up… creepy.

There is plenty to keep you busy once you get into the depths of the game but unfortunately early plays will see a lot of downtime as you wait for things to update or to build up the funds to make alterations. You can spend this time at ground level watching the dinosaurs frolic or do laps as you take control of a rangers jeep, but I will admit at one point I walked out and put on a load of washing. Once you finally get into the thick of it though and start experimenting with your dinosaurs genomes then there is enough to keep you occupied.

At the end of the day what can I say about Jurassic World Evolution? It was fun, I had a great time and just being able to create my dream park brought back the positive vibes that I get from the original film. This game might not have the finer details that simulator fans love but it is a good place for newcomers to enter and I think fans of the Jurassic Park franchise will see the love and effort put into many of the aspects in Jurassic World Evolution. Except for that one Chris Pratt impersonation—that’s just unfortunate.