Sushi Striker: The Way of Sushido Review – “Sushi belongs to everyone!”

Let’s get one thing clear: this game will leave you craving sushi.

In a world that’s been ravaged by a war called the Sushi Struggles, the evil Empire has forbidden the common folk from eating their beloved sushi. You play as Musashi, a boy or girl who fights for the rights of sushi for all. The way to do that? Why, by eating sushi, of course! Travelling the land, you’ll encounter soldiers of the Empire and defeat each of them by way of a sushi battle – a fast paced, link-3-or-higher puzzle game. Inspired by the sushi train style of  restaurant, the aim is to deplete your opponent’s HP by flinging your empty plates at them. The strength of your attack will depend on the plate’s colour and a few other variables, making it a surprisingly complex system. It’s absolutely the best part of Sushi Striker. That might seem like an odd statement, since you’d expect the gameplay to be the majority of the game. However, a large portion of the play time is taken up by the story.

In most puzzle games, plot is just an excuse for the characters shown on the front of the box to battle each other. Generally, these games understand that players didn’t buy the game for a story and probably don’t care all that much about plot.  They therefore don’t spend much time and effort on it, and instead let the player get on with racking up those combos. Not so for Sushi Striker.

Sushi Striker wants so much for you to care about its story.  It’s a grand adventure about defeating an oppressive empire, full of quirky and outlandish characters. Unfortunately, it left me utterly uninterested as it didn’t do anything new. Relying on cliche after cliche, the novelty surrounding its ridiculous premise wore off fast. All I was left with was a sense of “Oh, so you’re doing this tired old story?” Every overused plot point is here. In addition, the art style and character design felt very unrefined, with some character sprites not living up to the standard I’ve come to expect from Nintendo. The exception is the anime cut-scenes, which look great.

So convinced of its story is Sushi Striker that it’s locked away game modes such as puzzle trials and even multiplayer until 19 stages into the campaign.

With that said, I want to stop being a Negative Nelly and start discussing the areas in which the game shines: and that, thankfully, is the actual gameplay.  Matches are colourful and the simplest ways of stacking combos is getting the largest link possible of one coloured plate. Linking over 20 of the same colour is ideal. That’s hardly all there is to it, though – the type of sushi also factors. A 10-plate combo of shrimp sushi will hit harder than linking a combination of different sushis. Your score will increase further if you launch several attacks of the same colour plates. Then you have to factor in the abilities of your sushi sprite companions as well!

It’s incredibly hard to get the hang of all this at once, but don’t worry. You can ignore the more advanced methods for the first world of the game and just focus on linking a high number of plates, which can be tricky on its own. While I breezed through the early stages of the game, it wasn’t long before I had to up my game and get the hang of the more complex combos. I got a little frustrated with the controls, however. The joystick can be quite unwieldy on the fast-moving sushi lanes, so I switched to touch controls. Even then I sometimes felt like the game wasn’t responding to my finger correctly. This is probably just a precision issue,  but it still lowered my enjoyment. 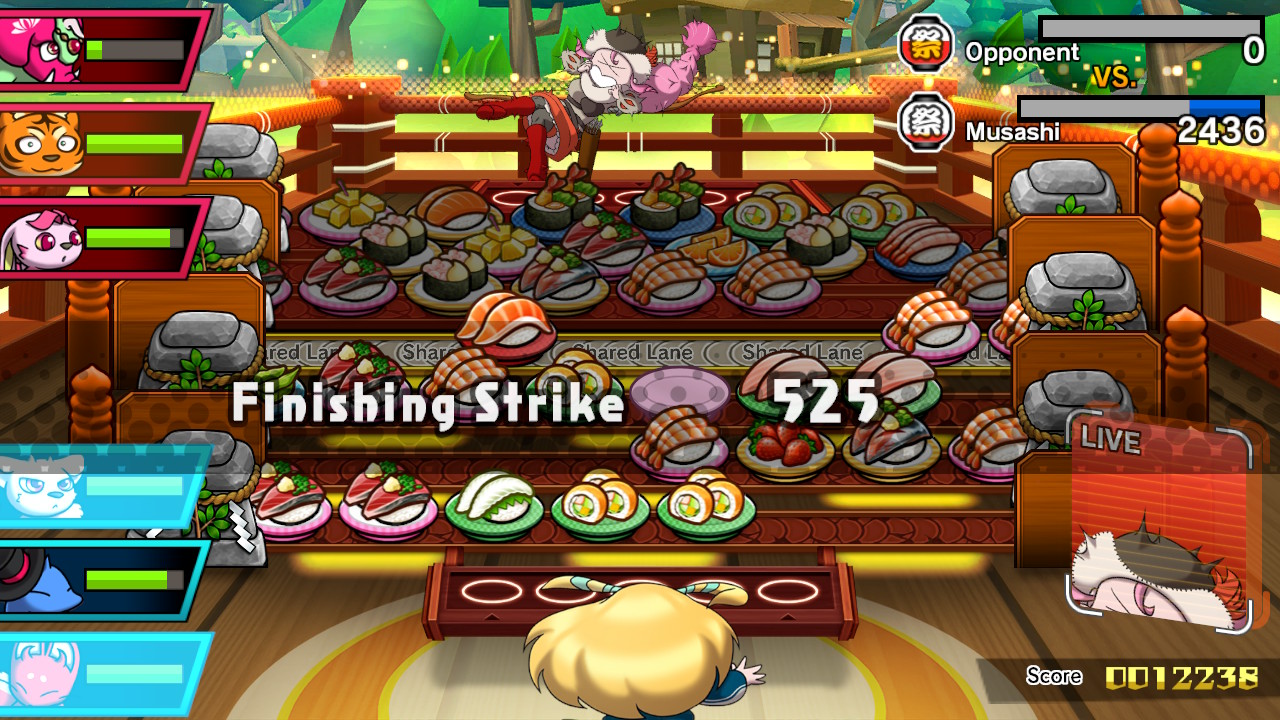 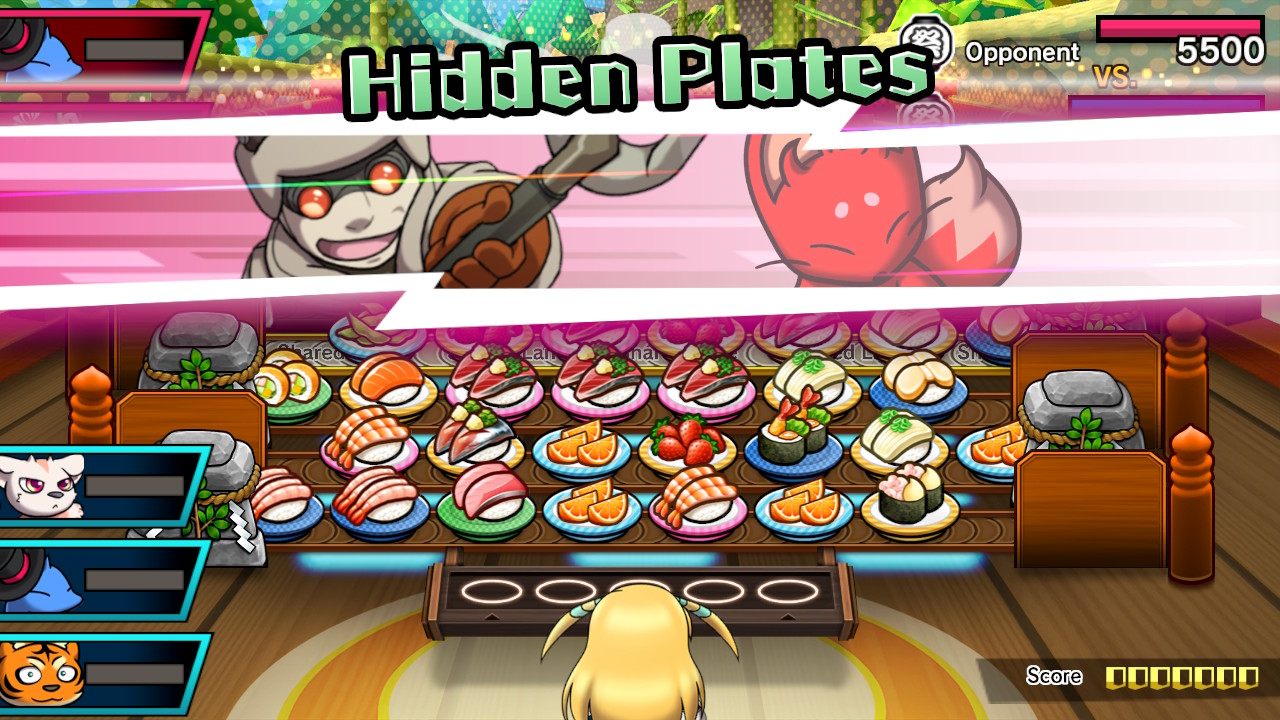 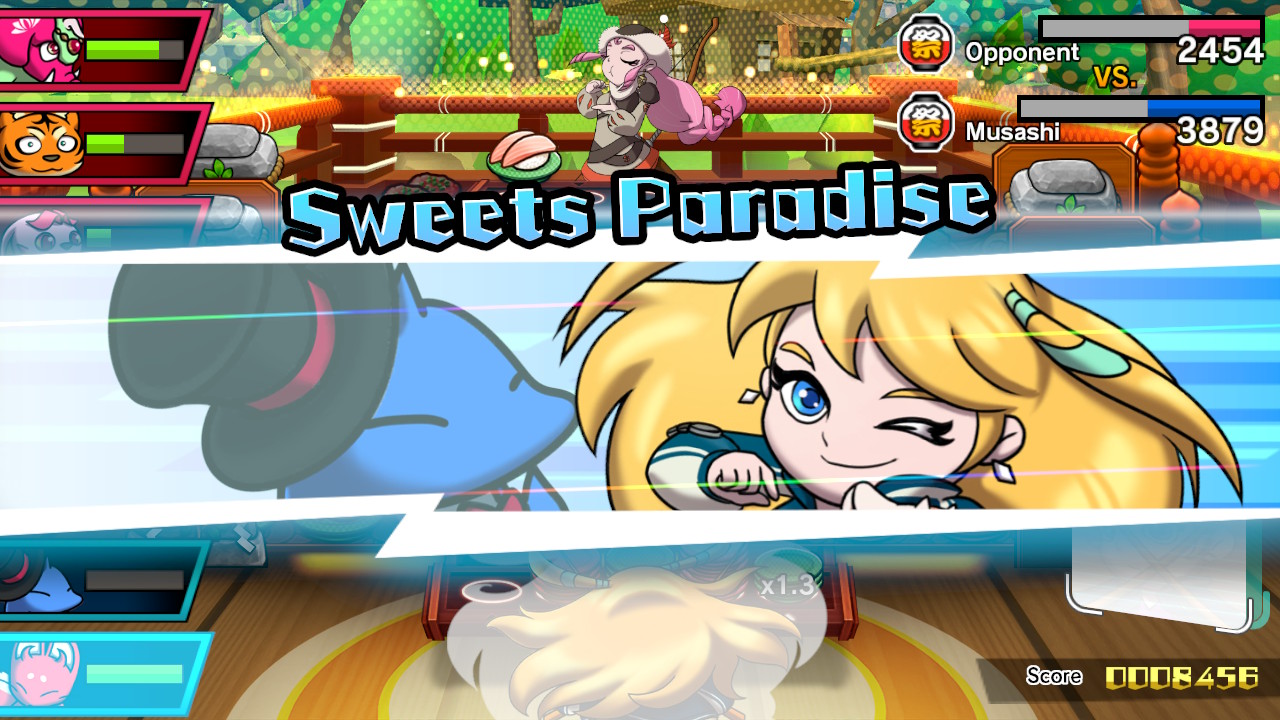 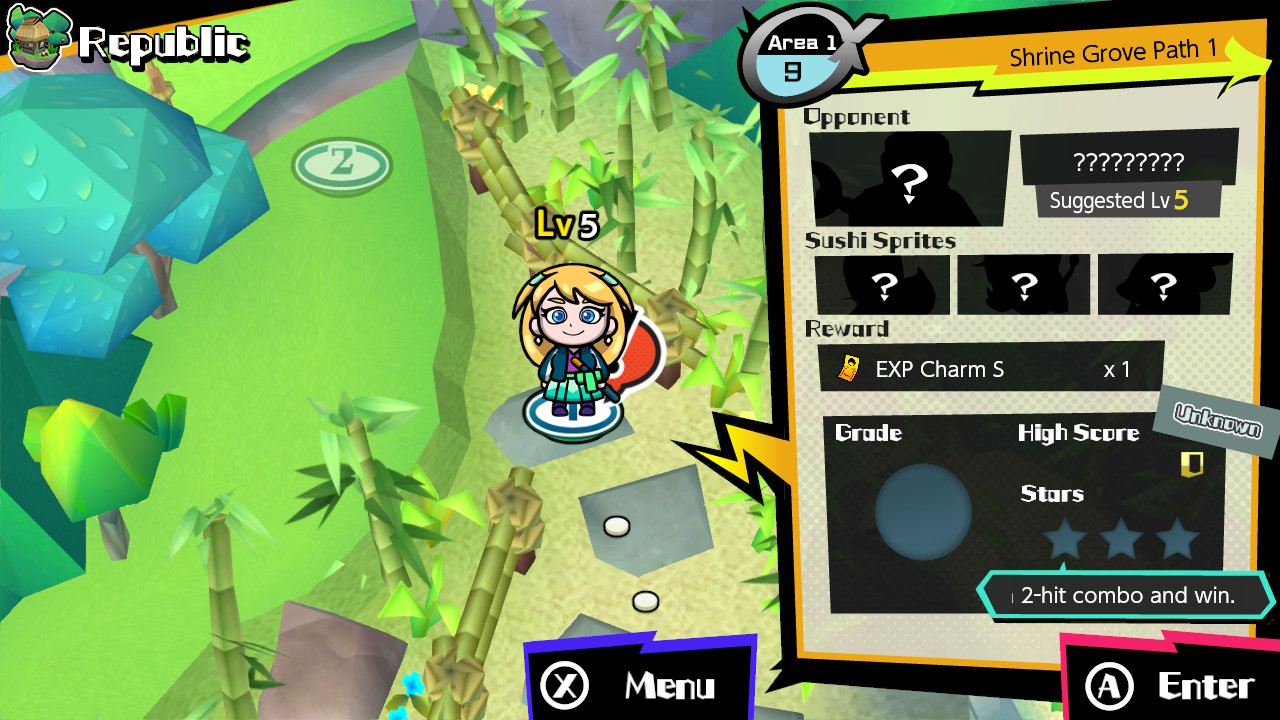 The colour and type of sushi on your lanes will depend on your sushi sprites – the cute companions you can collect on your adventure. They each send out sushi in a different order, and have special abilities which adds a layer of customisation that is fun to play with.

Participating in battles will level them up and give you stronger sushis. Musashi will level up too, raising HP and defence. Levelling up is always satisfying, but I question its implementation in a puzzle game of this nature. When I lost a stage, I found myself thinking it was because I wasn’t a high enough level, rather than assessing my own performance. This also means that replaying earlier levels is no challenge at all, since even the weakest of combos will now decimate low-level opponents.

All told, Sushi Striker is a bit of a mixed bag. There’s a lot to recommend, and the silly story can be largely ignored. If there’s one thing that makes the game hard to recommend, it’s the asking price of $69.95 (retail Australia).

Sushi Striker is one of those games that make me lament the rigid pricing practices that plague Nintendo’s systems. How can they expect this game to sell when it’s only slightly less expensive than Nintendo’s most prized IPs? The answer is already in: it can’t. The game has launched terribly in Japan, and I’d bet that it has a lot to do with the price. It ultimately does the game a disservice, as the alienating asking price has gamers locking away their wallets for bigger and better things.

Sushi Striker: The Way of Sushido is an energetic and fun puzzle game hidden under an inane story. Though kids may still be able to enjoy the story for what it is, I just skipped all the cutscenes. The game’s good enough that I’ll continue it on my own, as I’m interested to collect more of those adorable sushi sprites.

If I were to make a recommendation, I would tell you to buy the 3DS version from the eShop. It’s a perfect game to play whenever you have a spare 15 minutes, and the stylus will be infinitely more effective at scooping up those sushis than your finger. Plus, it’s a little cheaper than the Switch version.