Octopath Traveler follows the proud tradition of Bravely Default, Chrono Trigger and most of the Kingdom Hearts sequels of being an excellent Japanese RPG with a very weird name. The title does make sense, I guess: the game has eight story “paths”, and the player is certainly “travelling” them as they play. However, anyone turned off by the somewhat awkward title should relax; this game is pretty great.

Octopath Traveler’s story is unique, in that it doesn’t tell one story, but eight. When the player starts the game, they are invited to choose one of eight unique characters. They range from H’annit, the stoic huntress, Therion, the snarky thief, and Ophilia, the optimistic cleric, among others.

The characters may feel somewhat familiar to anyone who has played a lot of classic JRPGs. However, I found their stories to be fairly well-written and interesting. Many of the game’s cutscenes contain voice acting, and the localisation is mostly great.

The only exception I would find would be H’annit’s storyline; she and everyone from her village speaks in an approximation of an “olde English” accent. However, it is accomplished by just adding “-en” and “-eth” to random verbs and replacing pronouns with “thou”. It all becomes so silly-looking that I couldn’t even tell what they were trying to say at times.

“The locations have a very charming, ‘pop-up book’ look to them, and the areas you visit are highly varied.”

In terms of presentation, Octopath Traveler is extremely strong. The sprite-based art-style is surprisingly very expressive. The locations have a very charming, “pop-up book” look to them, and the areas you visit are highly varied. Small extra effects, such as burning fires, shifting sands and falling snow add amazing detail to the world.

Although the enemy sprites in battle don’t animate much, the battles still feel exciting and energetic. The game’s orchestral soundtrack was highly varied and detailed. It definitely added dramatic weight to the game’s story moments. The town and overworld themes were also quite catchy. Even the random encounter themes were suitably epic and dramatic enough that I didn’t mind how often I had to listen to them.

Each character has unique skills and weapon specialisations. Out of combat, each character has special abilities that can be used on random civilians in each town. These include the ability to fight people standing in doorways to open passages,  recruit random people to summon in battle, and the ability to steal or buy valuable items and weapons from strangers. These abilities were very fun to use, and were a great way to acquire useful items and equipment to take on the game’s challenges.

The game’s turn-based combat system feels like a strong mix of many systems seen in other Japanese RPGs. Overall, the combat probably owes the deepest debt to Bravely Default and its sequel on the 3DS, in that players can stock up points, called BP, each turn to allow them to take extra action. However, there is also a strong emphasis on exploiting enemy weak points. When the player attacks an enemy with a weapon type or element that it is weak to a certain number of times, it becomes “broken”.

A broken enemy will miss their next turn and take extra damage when attacked. There is an element of risk to this system, as it can be difficult to decide whether to spend BP early to break an enemy quickly, or to grind the enemy to a broken state slowly and splurge the BP on strong attacks when it is vulnerable.

The boss fights in particular were very well designed. Each boss has varied strategies to test your skill at the combat systems. They are quite challenging as well; if you aren’t well-equipped, or haven’t learned how to use your character skills properly, you will become very familiar with the Game Over screen. Overall, the combat is extremely fun and varied.

Although the gameplay is similar to that found in games as far back as the original Final Fantasy, efforts have been made to modernise its systems. For instance, you can fast travel to any previously visited town from almost anywhere. Combined with the fairly open nature of the map and story progression, this is a great addition.

However, I do wish that Octopath Traveler gave you the option to scale down or turn off the random encounter rate. It doesn’t have the worst encounter rate that I have seen, but it can still be frustrating to be constantly attacked when I am trying to travel between towns. Considering fellow JRPG flagships such as Final Fantasy, Dragon Quest and even Pokémon have been moving away from random encounters, it’s a bit annoying that the game sticks to this system.

The story progression is a little weird in its design. Instead of telling one unified story, it tells eight totally separate ones that don’t really overlap. Although all eight characters end up in your travelling party, depending on whose chapter quest you are playing, the game’s cut-scenes treat that character as if they are travelling alone. The eight heroes in the cast barely even interact with one another outside of battle except for small optional dialogue scenes after certain cut-scenes.

Overall, I feel like Octopath Traveler has some pacing issues with its story and combat. With the story, characters don’t develop or even really have lines outside of combat in between their chapter quests. However, trying to tell eight stories at once means that Octopath Traveler can’t necessarily give each one proper focus.

“…trying to tell eight stories at once means that Octopath Traveller can’t necessarily give each one proper focus.”

To explain what I mean, I started out playing as H’annit, the ranger character. Her first chapter was at level 1 when I started the game, but her second chapter had a recommended level of 27. This meant that about 18 hours of gameplay had passed before her storyline could be picked up again.

By that point I had totally forgotten what her original motivation was. Fortunately, the game includes a journal section to check up on each “path”, as well as document the game’s many sidequests.

Although Octopath Traveler is not the first game to tell concurrent storylines, it might be the most ambitious. However, other games that have tried this kind of storytelling, such as Kingdom Hearts: Dream Drop Distance or Heavy Rain, switch between their main characters frequently, and only focus on a small cast to make things more palatable.

Trying to do that with eight characters at the same time makes it hard to give each narrative any sense of flow. Every time a story has a cliffhanger, you are encouraged to move on to another character, and not revisit that story for a number of hours. Instead of being a grand narrative about these eight characters, it feels more like trying to read eight different books at once, one chapter at a time. 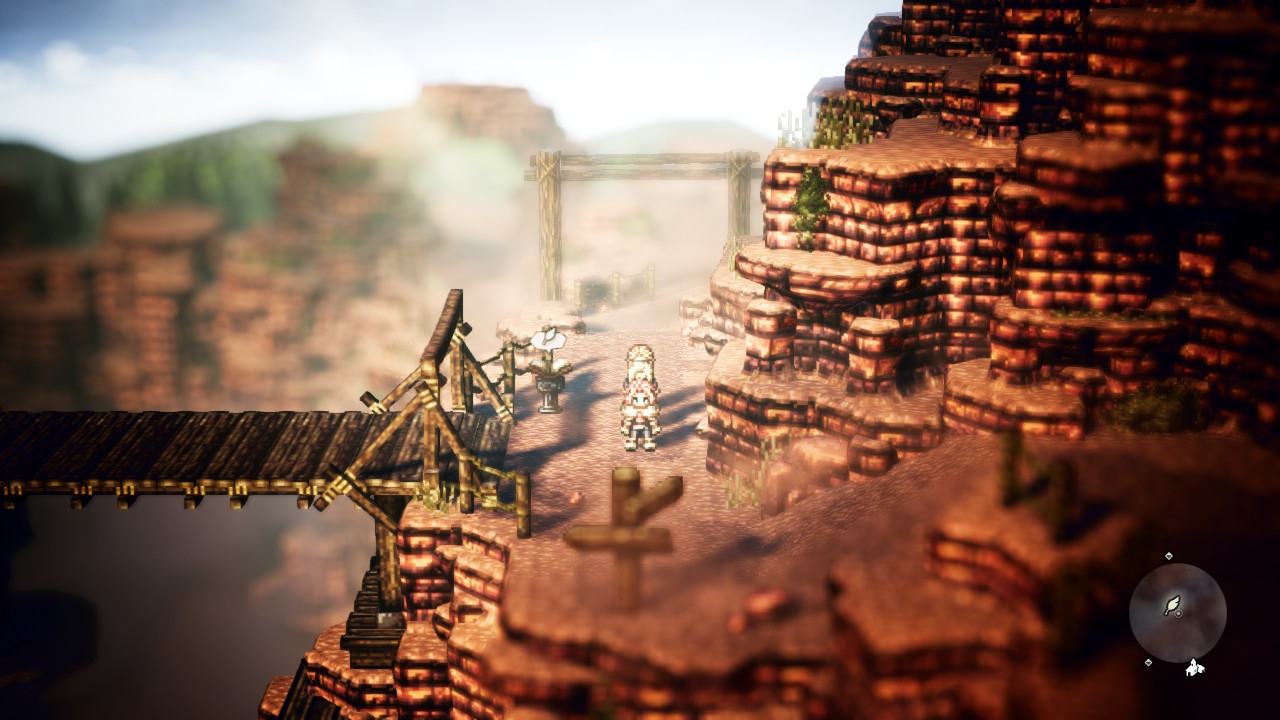 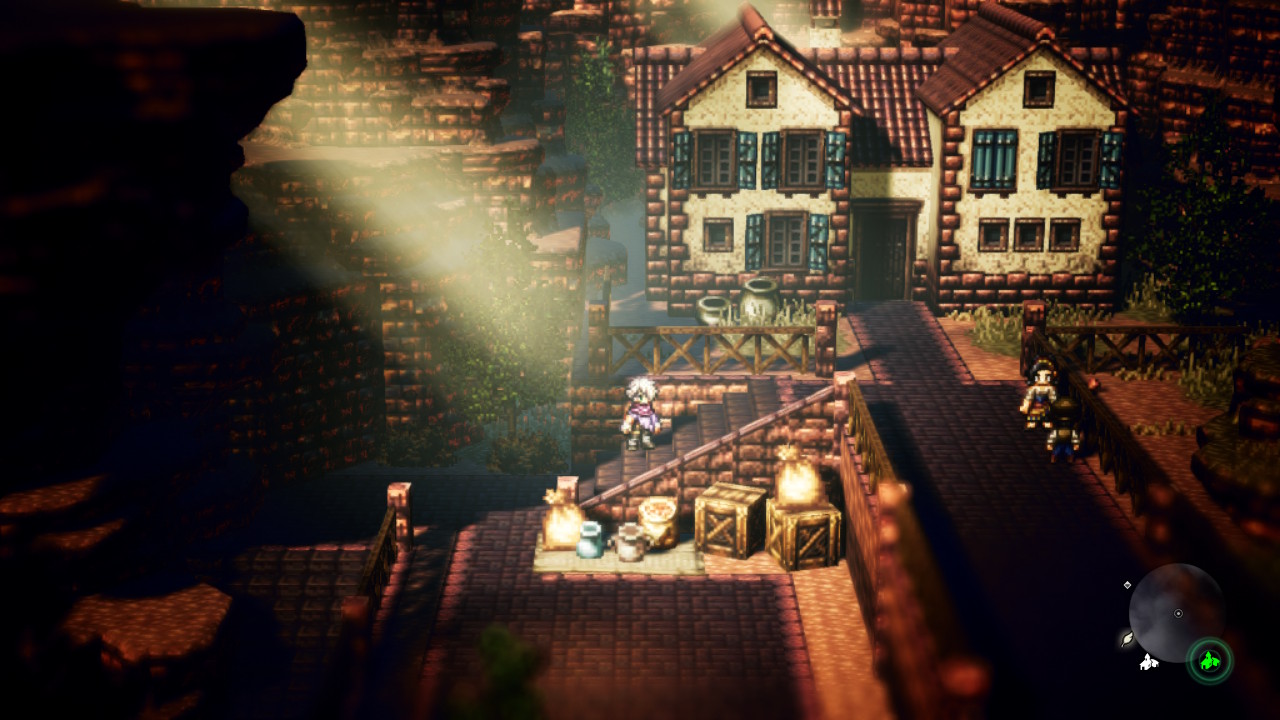 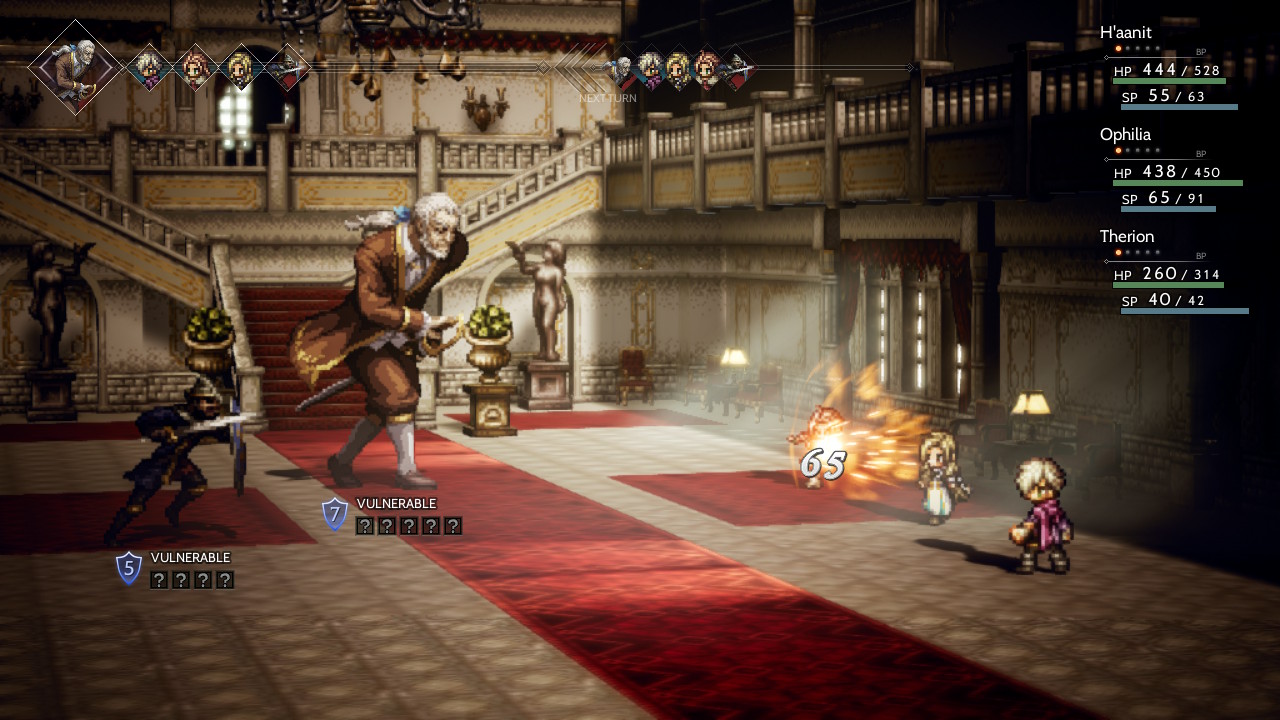 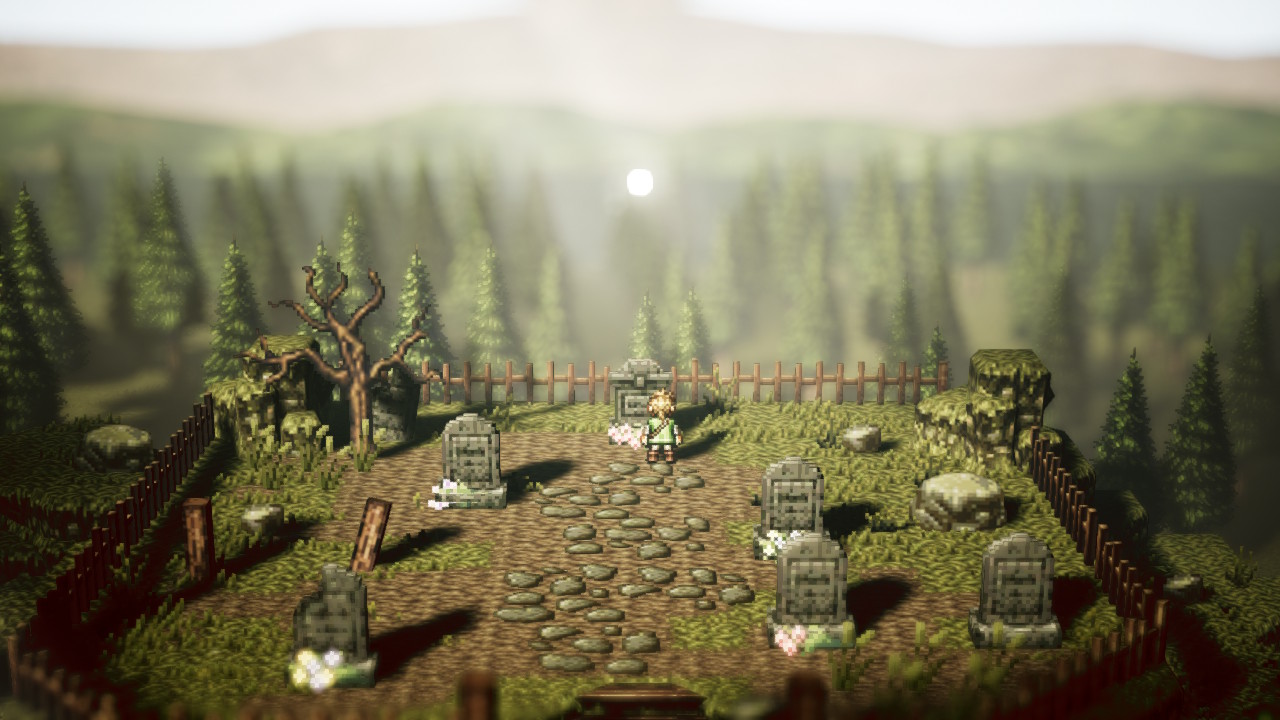 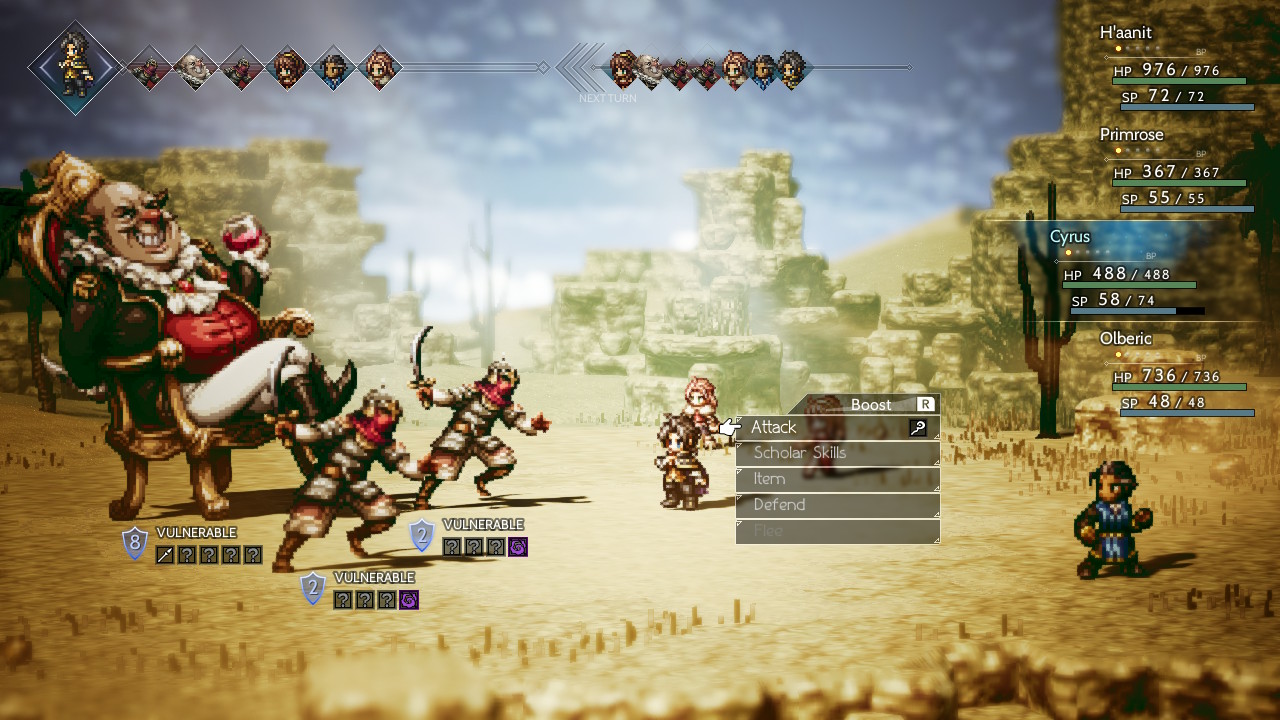 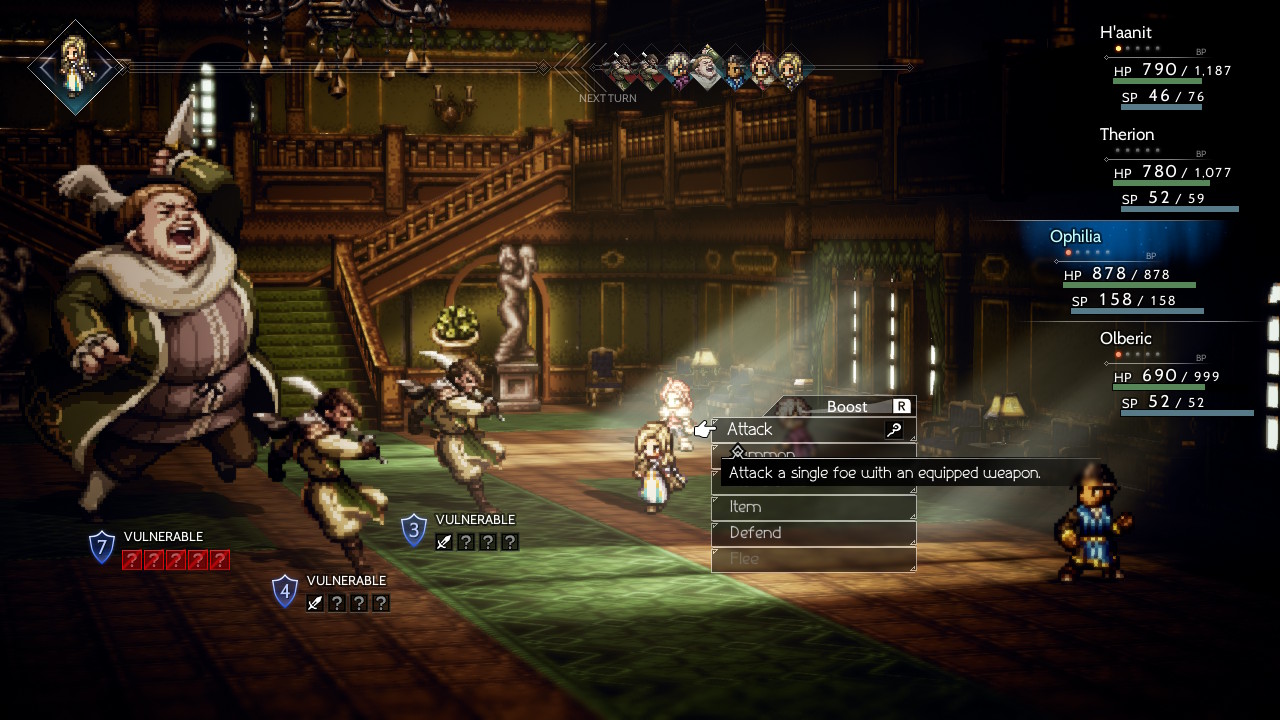 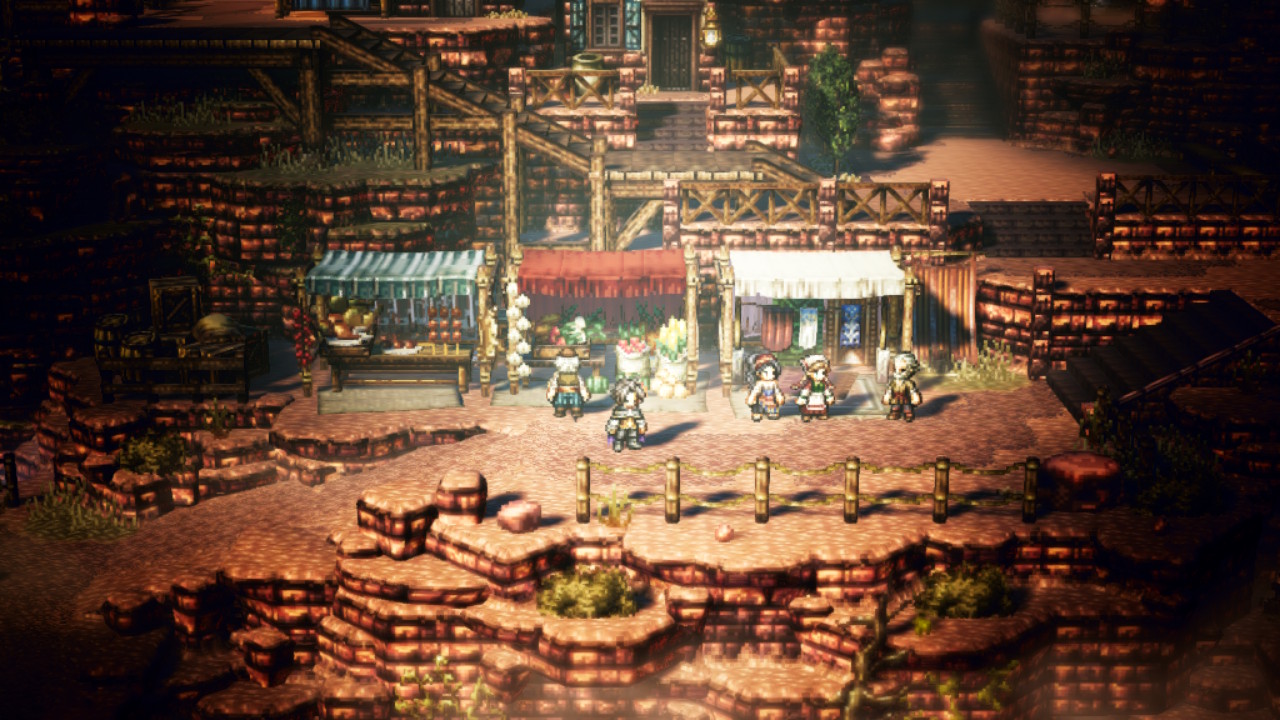 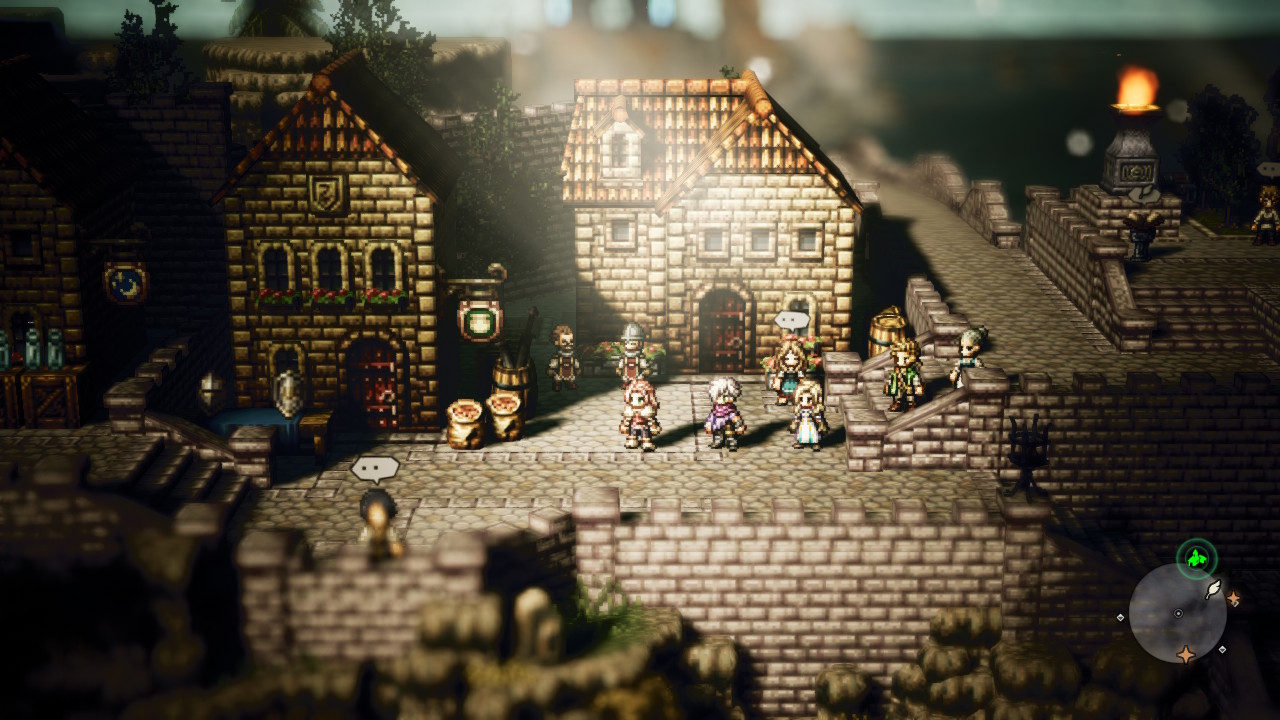 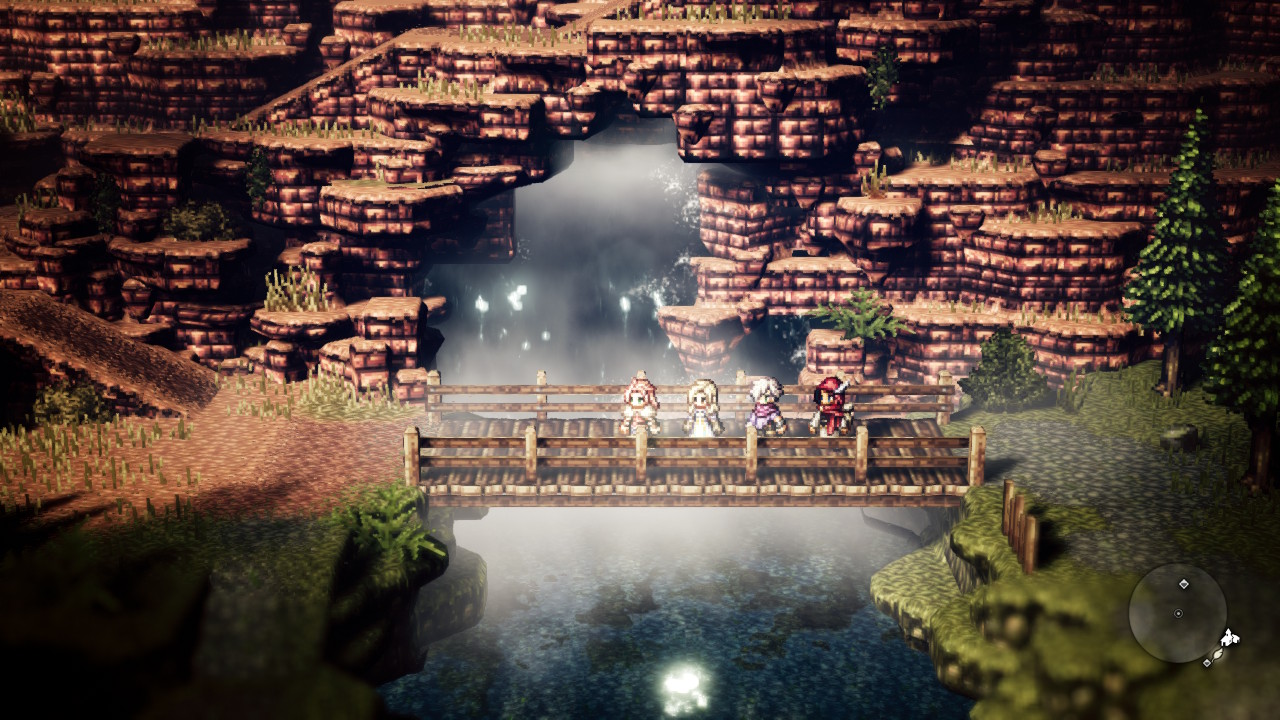 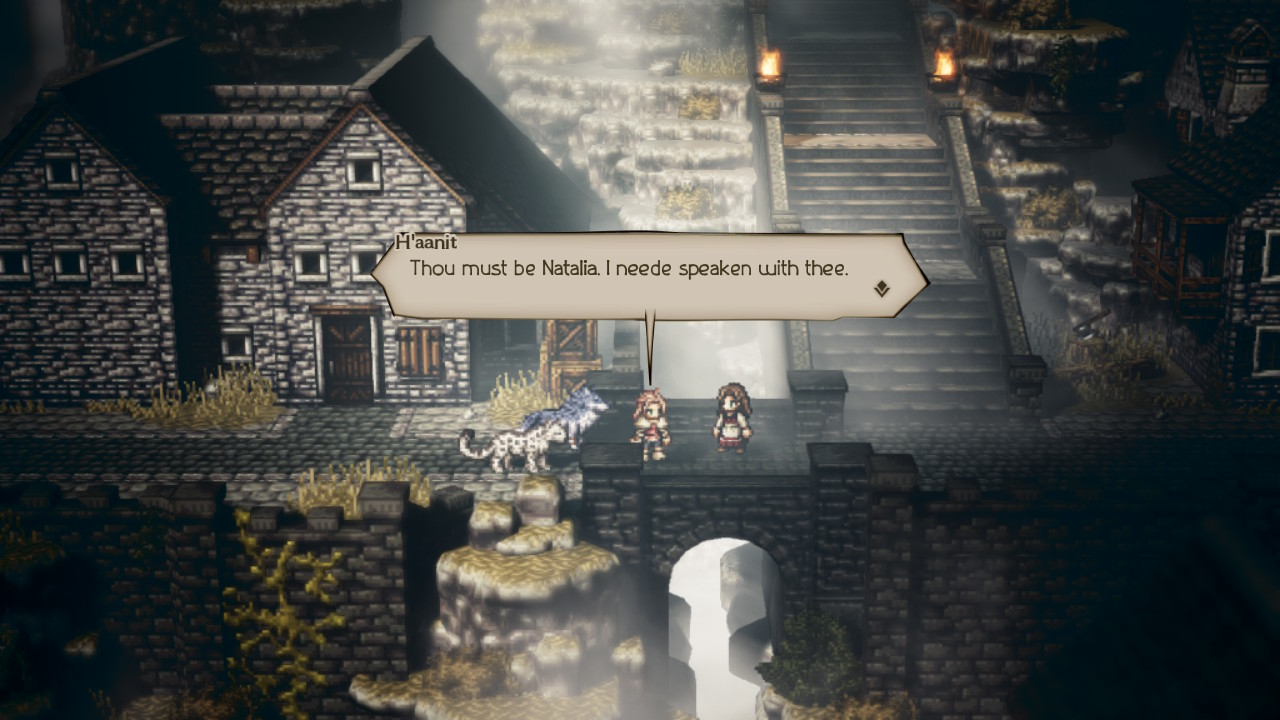 Octopath Traveler’s gameplay also suffers from slow pacing. It throws big difficulty spikes after each chapter, where each subsequent chapter has a recommended level well above the last one, necessitating grinding. This wouldn’t be so bad, except that there are eight characters, only four spots in the combat party, and there is no leaked experience. Which means that characters not in the combat party get no experience whatsoever. Thus, if you want a well-levelled party, you must be swapping out party members constantly.

Although all of the characters will be available after a few hours, the character picked first can’t be taken out of the combat party. I found this to be a weird and unnecessary limitation. The character chosen first isn’t any more important to the story, and no character is really useful in every area in the game. Adding to the lack of leaked experience, it leads to vast differences in character levels across your party. Furthermore, only three party slots can be swapped out for other characters.

Octopath Traveler is very well suited to portable play, however. Save points are very common, and the game autosaves during most screen transitions. The performance is very good in both handheld and docked mode, and the visuals look amazing in both formats.

Even with some gameplay and story complaints, I cannot deny what a great time I have had with Octopath Traveler. Sure, it has some annoying gameplay issues, and the well-written narrative is overall paced very unusually. However, it captures what made classic 16-bit JRPGs great, and adds its own twists on the formula. If you own a Switch and are nostalgic for the JRPGs of old, you will definitely have a good time with Octopath Traveler.