The 80’s have been responsible for one of the most iconic “looks” that has permeated all of media, from fashion to movies, from marketing to video games, when something is 80’s inspired you’ll know. The neon design and the synth track dig their claws in your brain and you can’t help but feel the whiplash of a nostalgia trip that perhaps you’ve experienced a little too much lately. While Rifter certainly embodies that 80’s aesthetic thankfully beneath a very familiar surface is a game with a lot more going on under the hood then just “a look”

At it’s core Rifter offers a very simplistic idea. You play a Rifter who comes to the planet with a fair amount of confusion about who they are. Luckily you’re not alone as you’re joined by Tiny who is giving me some serious Navi flashbacks—just with less “Hey, listen!”. Tiny quickly puts you to work and you’re sprinting off stage right as fast as your little green legs can move you.

While the controller option will probably feel the most intuitive you can still find yourself five steps behind very easily.

As the game begins you are offered a few different control schemes that vary between a few different options for keyboard and controller, each with their own strengths and weaknesses. Tiny will start to slowly feed you new skills to help you traverse the minimalist landscape. The primary skill you’ll learn to master is the ability to tether to certain nodes around the world. If you’ve chosen to play with keyboard and mouse you’ll run with the keys and click in the direction of a node to attach, while using the controller you’ll flick the joystick for the same result. While the controller option will probably feel the most intuitive you can still find yourself five steps behind very easily.

As soon as your grappling hook attaches to a node you are all about balancing your momentum to fling yourself from node to node or propel yourself across large gaps. You’ll pick up more abilities as you go, from a dash to a ledge grab and so on. It is important to string these all together for high combos to get those desired high ranks at the end of each level. It will also be important to make your way off the obvious path and try and reach some more obscure points in the map where you’ll discover shards that you can trade in to upgrade your skills and turn the dial up to 11 on your traversal repertoire.

It won’t just be an obstacle course between you and your goal, the world is littered with an array of enemies who will attack you on sight. As opposed to the normal attack pattern of a side scroller jumping on their heads just isn’t going to cut it and you’ll need to be quick a tricky to attack them from a variety of angles using the acrobatic skills you’ve been mastering. In terms of control you can often find yourself loosing rhythm easily with one wrong move and you’ll need to be quick with your fingers as the difficulty ramps up almost as soon as you’re through the opening stages. I tried both control schemes and ended up using the controller more often—but even then I was left questioning my choices. Thankfully while you’re learning the ropes it’s never to slow to reset you back and the levels are never overtly long so even starting the whole level over never feels like an obnoxious punishment.

Overtime you’ll realise that there is a little more going on in Rifter narratively then just run to the end point as you begin to questions your actions and are introduced to a cast of characters who for the most part are really well written. One or two characters may come across at time as too much but they are always likeable which is a huge feat when considering you’re talking to neon polygons—not known for being the most expressive shape. The art direction is obviously matched with some fairly smooth synth beats with a pretty decent variety in tracks. Unfortunately if you’re doing the same level over and over trying to achieve something particular then you might get a little exhausted with that one track but never to an extreme level, it’s not going to be burrowing into your hippocampus. 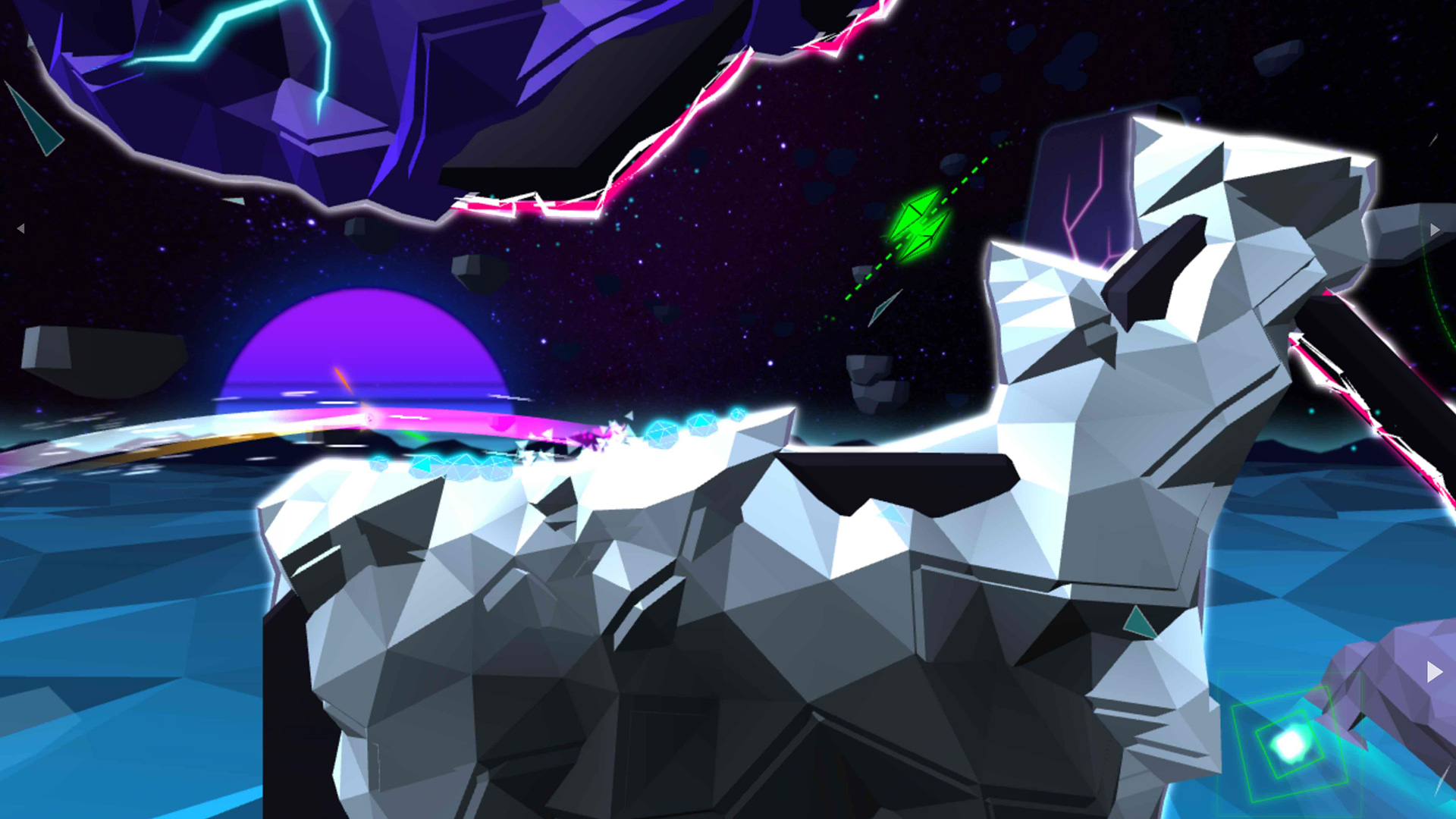 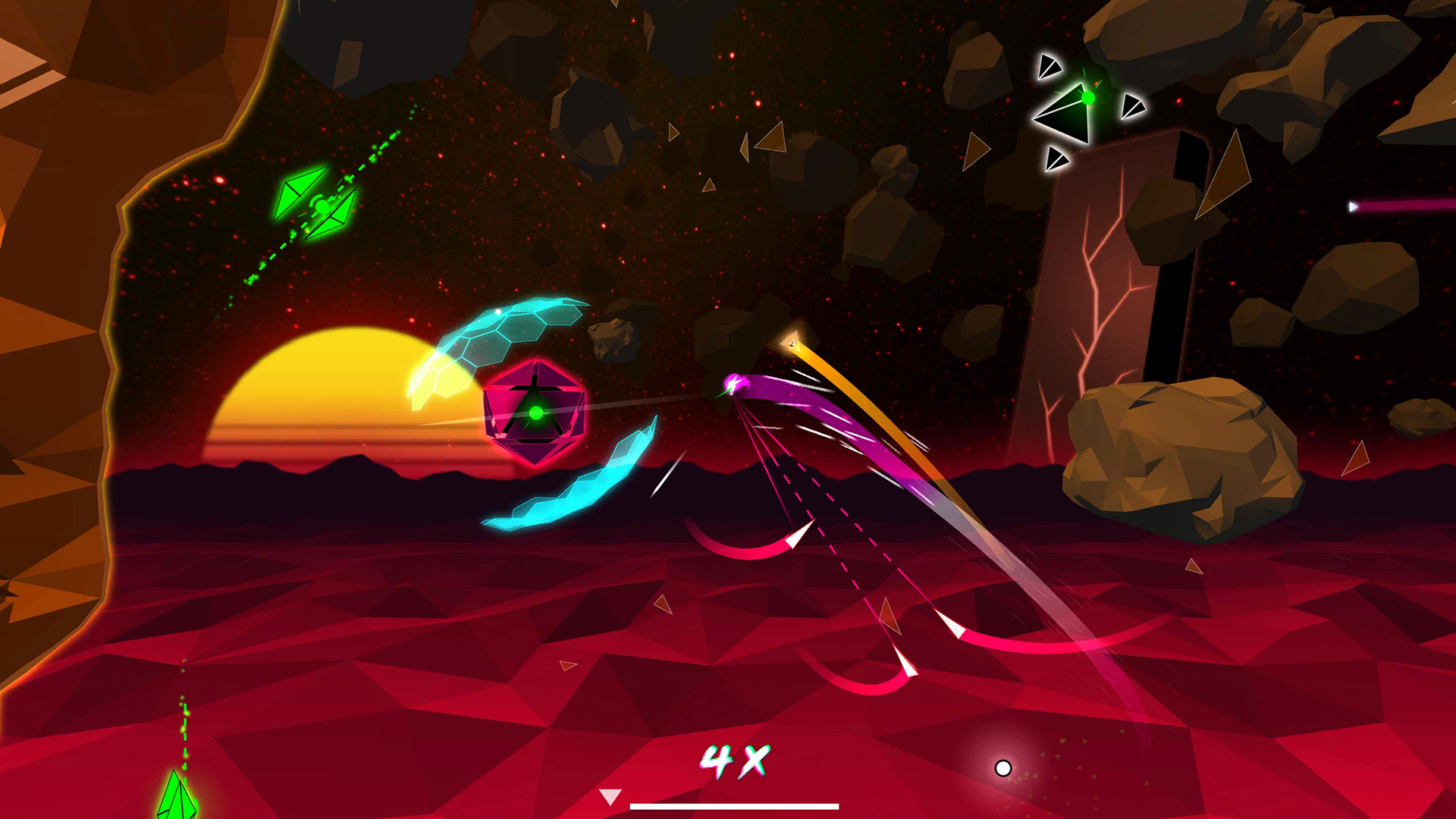 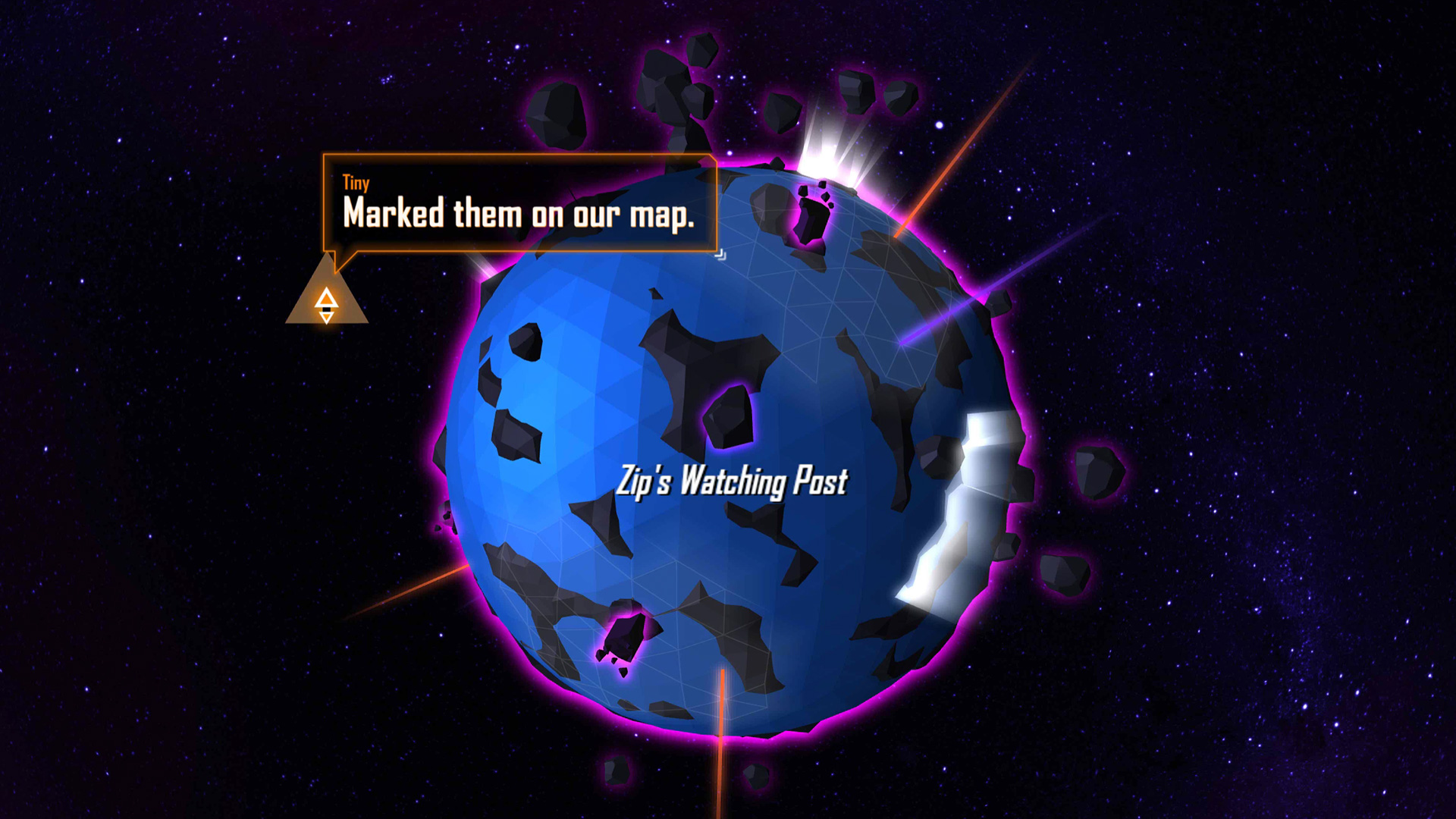 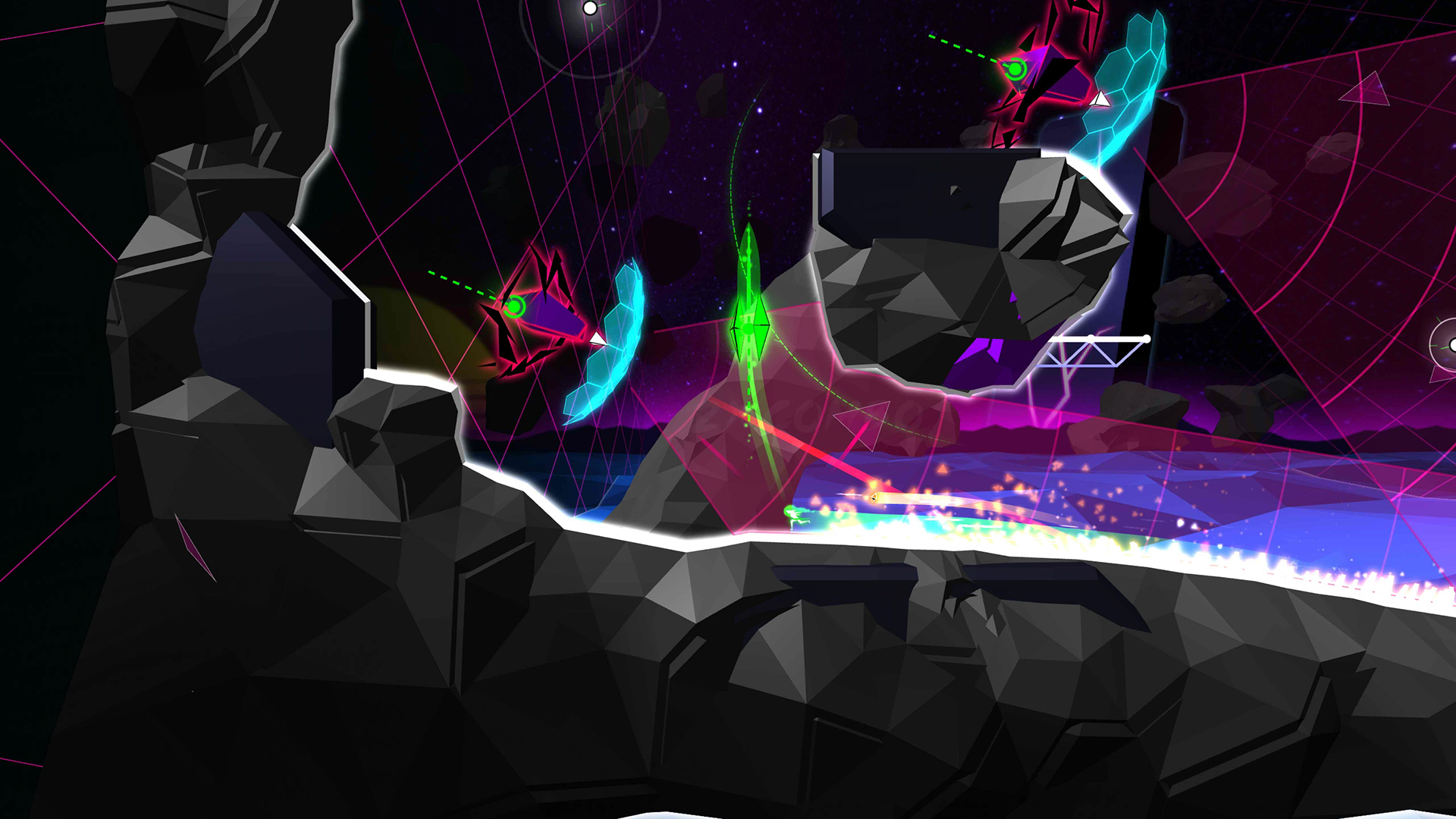 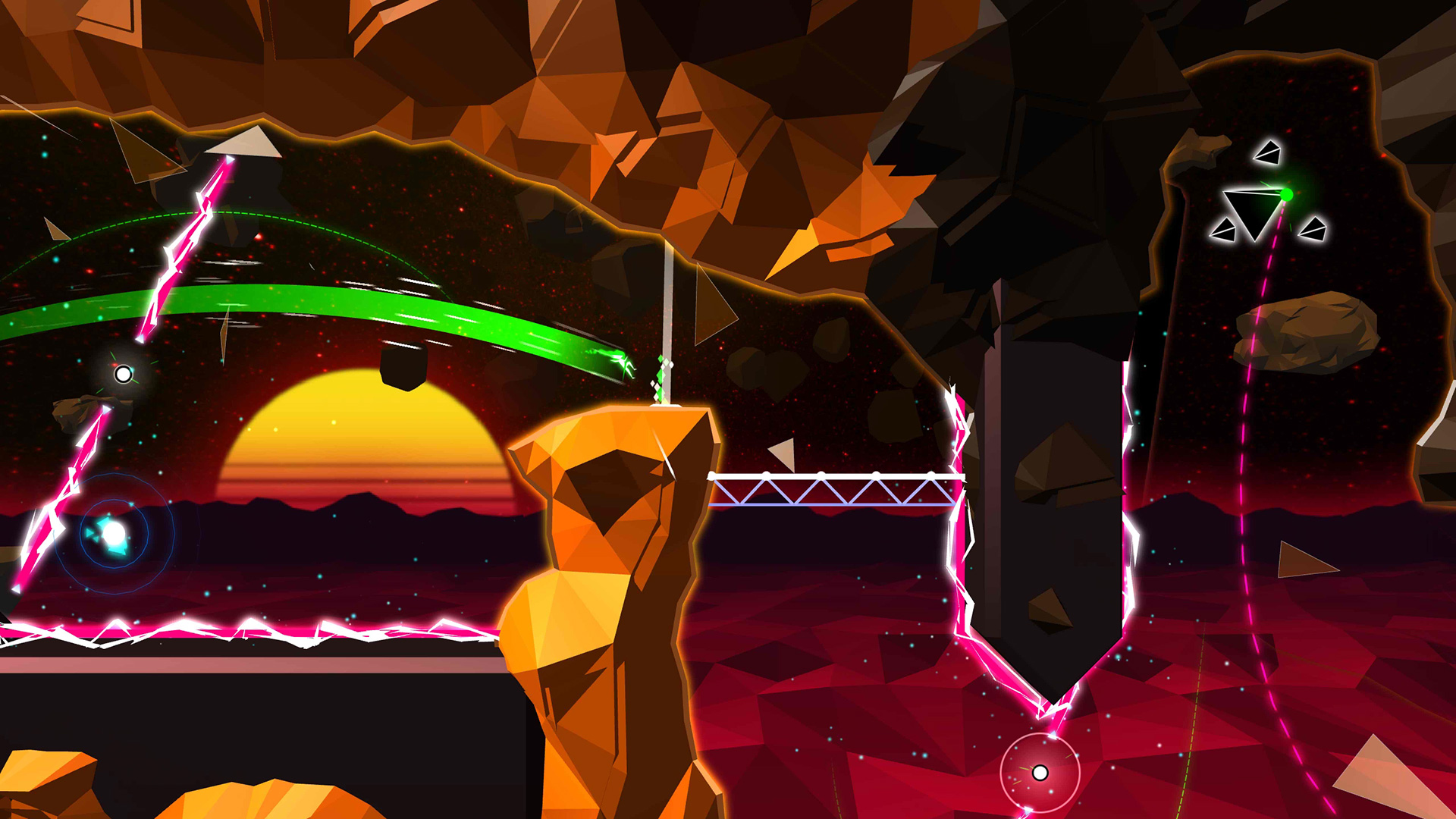 Even once you’ve made it through each level there is heaps to keep you going,  you can focus on finding all the shards to unlock skills or besting your own scores as well as friends in a leaderboard. All of this before you even take into account the level challenges, introduced by I think my favourite NPC, that task you with some of the most difficult stunts in the game. I won’t be shocked at all to see this game appear in speed run circles in the near future as it is perfectly built for that.

While Rifter may appear like a simple idea at first with some very straight forward controls that doesn’t mean I can recommend this game for everyone. I’ll freely admit this is the first time in gaming I started to question if my hand eye co-ordination was finally being effected by the terrible reality of ageing. The game is fast paced and asks you to stay on your toes with a learning curve that may turn off the less dedicated. I also think though that in no way should the game be dismissed if you are like me and don’t really dig the 80’s nostalgia plaguing popular culture at the moment. It’s a fun, fast paced romp with only the occasional rough edge, but you’ll be whipping by so fast you won’t even notice.