The 2D platforming puzzler has been a staple of the gaming world longer then I’ve been alive, and considering that at my age I’ve already run out of new ideas I can’t believe that the genre would have anything new to offer. Run left to right, jump and maybe use an ability, done, I’ve just made a side scroller. Then along comes Semblance and with one tweaked constant in gaming, the solidity and rigidity of the levels, it proves that side scrollers still got it.

Nyamakop, developers of Semblance, began life in early 2015 when the two founders, Ben and Cukia, were completing honours in Game Design at The University of the Witwatersrand, Johannesburg. When presenting an early version of Semblance they were given some advice from Judd Simantov — ex lead at Naughty Dog. They were told they were on to something and to take it further. That advise birthed the drive and passion the pair then showed for the next three years as they travelled the world with their project and worked on their game in what ever spare time they could scavenge.

Semblance is a simplistic idea. You are Squish, a blob of gooey play dough that lives in a soft and bouncy world. That is atlas until a sickness begins to spread through the world and turns Squish’s ideal world into one of hardness and hazards. As your enemy is mainly the stiff sickness spreading through the world there isn’t really any kind of antagonist outside of the environment for you to deal with. This is because Semblance is less about a plot and more about a mood and a feeling, building ambience in this forest that these creatures inhabit.

You will move through the world using only three skills really, a jump, a dash and a reset. It is how you’ll use these skills that will change and evolve over time as new elements of the plague alter the world in different ways. Dashing into easy to locate platforms that haven’t been infected will warp them with the force of your face smacking into them. Things can be stretched only to certain limits and once you’ve picked a direction to mould things you won’t be able to go the other way so you’ll need to think through your decisions before you begin. Thankfully you can set of a small pulse around you that resets blocks you’ve been shaping.

“You’ll be using these skills as you traverse puzzle rooms to locate specific little orbs of light that when collected can purge the infection from the world.”

You’ll be using these skills as you traverse puzzle rooms to locate specific little orbs of light that when collected can purge the infection from the world. You’ll have one major hub world that will lead to stages, in each stage you’ll find doorways into levels. Each level can range from 3 to 7 orbs needing liberation and each ones will exist in it’s own little room. By having each room its own seperate puzzle the orb is not needed to proceed to the next section, this means that if you’re stuck on a puzzle you can move on to the next and perhaps while resolving that you’ll realise what you should have been doing in the one you skipped. This is helped by each level having a theme to the puzzle solving so things will start to fall into place as you go, this does also mean though that you do end up just looking for similar situations in each room. Often this is remedied by some smart red herrings being put in to over complicate a pretty easy solution.

The art direction of Semblance certainly has a unique feel. In a monotone purpley-pinky-bluey world that appears to undulate slightly around you in the manner of a living organism as opposed to in a threatening way. The singular contrast are the vibrant colours of the solid world spreading. From infection on the backdrop to hard rocks that will Insta kill Squish, these contrasting colours mean that you can always see a threat on each level that you enter. Visually the world is separated into a background, mid ground and foreground. You’ll only be playing on the mid ground but the flora and fauna take up residence on all three to create a dense feeling to the world. This does also mean though sometimes the foreground art can feel like it is getting in the way but because of the way the three planes move with each other you never feel like your vision is blocked for long. 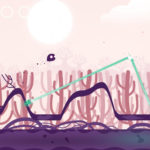 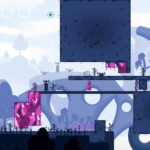 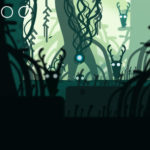 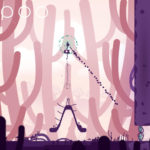 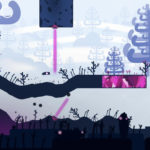 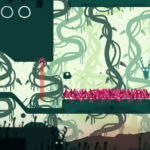 Semblance is definitely designed for short bursts of play as opposed to the long haul that many modern games demand. So playing this on the Switch was a great move for me as I could get through a couple of puzzles on my commute or on lunch. All of this made even better by how smooth all of the animation was. There are a few little things hidden off the beaten track to collect however as they are essentially just there to encourage exploration and tick a box they feel like they exist purely because this is a video game and you should be collecting things.

One of the key factors of semblance is after you’ve learnt your two moves it doesn’t stop to teach you anything. You will learn everything you do from there on out by using common sense and experimenting a lot. The fact that each death only resets you in the room with all your moulding progress still in tact means that you never feel punished for trying something, risk is rewarded. While I do feel like the reset ability wasn’t explained very well to me at the beginning, I figured it out quickly and let’s be honest that was probably more on me then the game—you may remember from the start of this review that I am getting old now so I can probably blame senility.

It is easy to forget sometimes that there are people behind the games that are being made, Semblance is one of those games where you can see the heart of the team that worked on it right there on the screen. This two man team from South Africa have created a solid idea with a fun mechanic. While it may not be the most complex side scroller it’s always good to remember that some of the best games out there took a simple idea and stretched it out as far as it could go. Nyamakop might still have some variety on the mechanic left up their sleeve but it’s a strong first entry for what will hopefully be a catalogue for the team.