Frqncy is a small experience from first-time developers MushroomLamp Studios, based in Western Australia. It’s an audio-based ride through a colourful space where you must avoid neon cubes to the tempo of your music. You can choose to play music from a local library, streaming service, or from a curated list of artists that promises to be swapped out for new ones every month. You can compare your scores either locally or globally, and choose between playing a single song or cruise indefinitely without worrying about score.

Controlling your vessel through space, you’ll need to avoid the constant barrage of neon cubes that appear in front of you. You can either evade or shatter with your limited ammo. Rack up your points by picking up power-ups and surviving as long as possible.

And that’s it, really. To survive for long, you’ll really need those ammo and health drops. Other power-ups will give you points, invulnerability, or a boost. It’s enough of a challenge to finish one song, and fun enough that restarting never seems like too much of a chore. It’s not something that’ll likely get you obsessed, but it’ll be a pleasant play of about 10-30 minutes a session.

Each month, the game’s featured artists will change, which so far looks to include some great Aussie artists. It’s a good mix of rock, electronic, and funk – slow and fast.

Your ship’s speed is affected by the song’s tempo, and while the cubes are supposed to appear to the beat of the music, at times it feels more random than that. This is not such an issue as Frqncy labels itself as a chilled-out racer rather than an actual rhythm game. But that doesn’t change the fact that there’s not much going on here. 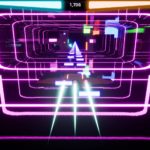 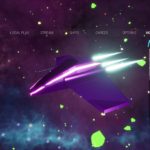 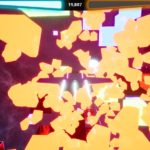 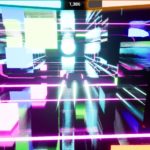 I had the most fun with Stream Mode, where you can play indefinitely using your own music library or streaming service. It isn’t limited by service or sound file either. As long as it’s coming out of your speakers, it’ll work. This means you can load up a playlist of whatever you want, for as long as you want – and just play to your heart’s content. It was easy to just chill out and let my hands do the work for me while I enjoyed the pretty lights.

This is where the game could have shined. I could have sunk way more time into this game if it had more in the way of game feel. I sorely wished it had an air brake or barrel roll mechanic, something to make flying in a spaceship feel more interesting. It could have done with some visual variation as well – I like that you can change the colour of your vessel, but some choices of scenery would have been good too.

A game doesn’t need to be complex to be great fun, but it does need something else to keep it interesting. Frqncy doesn’t quite go far enough to keep me hooked for more than 20 minutes at a time. Although if you are after a smooth, chill experience then this might be the game for you. I might check back every month to see the new featured artists.

It’s always great to see new Aussie developers on the market, so I really wanted to like Frqncy. For a first-time studio with only two members, it’s a good starting point, but it’s held back by a lack of complexity. Hopefully Frqncy lands for MushroomLamp Studios because I certainly look forward to seeing their future games!