Open-ended games are certainly becoming a big trend in the industry. Be it the bustling streets of GTA V or the countryside of Far Cry 5’s rural Montana, games seem intent on keeping us hooked for the long-term. What I can’t grasp however is games that expect you to pave your own path and make your own goals. I love the joy that seems inherent in a game like Minecraft or Stardew Valley, but I just don’t get how it would hold somebodies attention for tens if not hundreds of hours.  What I really need is a game that lets you do all kinds of stuff but gives you an explicit goal to work towards. Such is the case of Graveyard Keeper.

You died. You were buying groceries for your love when you were hit by a car. But rather than finding peace in the afterlife, you have been reincarnated. Or you’re in another dimension or something, either way, you are far from home, far from your beloved. Now you are charged with being the caretaker of a small village’s graveyard. So begins your quest: befriending villagers, exploring, tending to your duties, all in the hopes of returning to your love.

It’s hard not to compare Graveyard Keeper to Stardew Valley. In both, you are a person on a rural crop of land. You must work off the resources in the land to make things for people. You can trade things with people to make money and you can build relationships with the various townspeople by doing tasks for them. Hell, both games even use the good ol’ indie pixelly aesthetic.

The thing that really sets Graveyard Keeper apart from the likes of Stardew Valley is it feels like a much more directed gameplay experience. From minute one you have a clear objective: return to your home. But of course, this is the end goal. There are skill trees, crafting, and missions for you to undertake first. So quickly this single goal spiderwebs out into a much more involved gameplay experience. One character can help you with your goal and another may be able to provide you a new source of income, as soon as you do something for them. But in order to do that for them you first need to do something for someone else, and so on. There’s almost a cookie-clicker-like curve of engagement as you get better and better and quicker and quicker at certain tasks.  For this reason, I have to say I’ve been finding Graveyard Keeper much more fun than the likes of similar games.

Since the game has a stronger sense of direction, it also has a feeling of immediacy to it. There are no months or years in Graveyard Keeper, only a 6-day week. But each day represents a new character to interact with. You can open the church on the purple day. You can meet the scientist on the blue day. It means you may have to wait a bit for certain actions, but never too long to be much of a drag. It only delays you a bit. It gives you a chance to prepare for these little constantly cycling “events”. 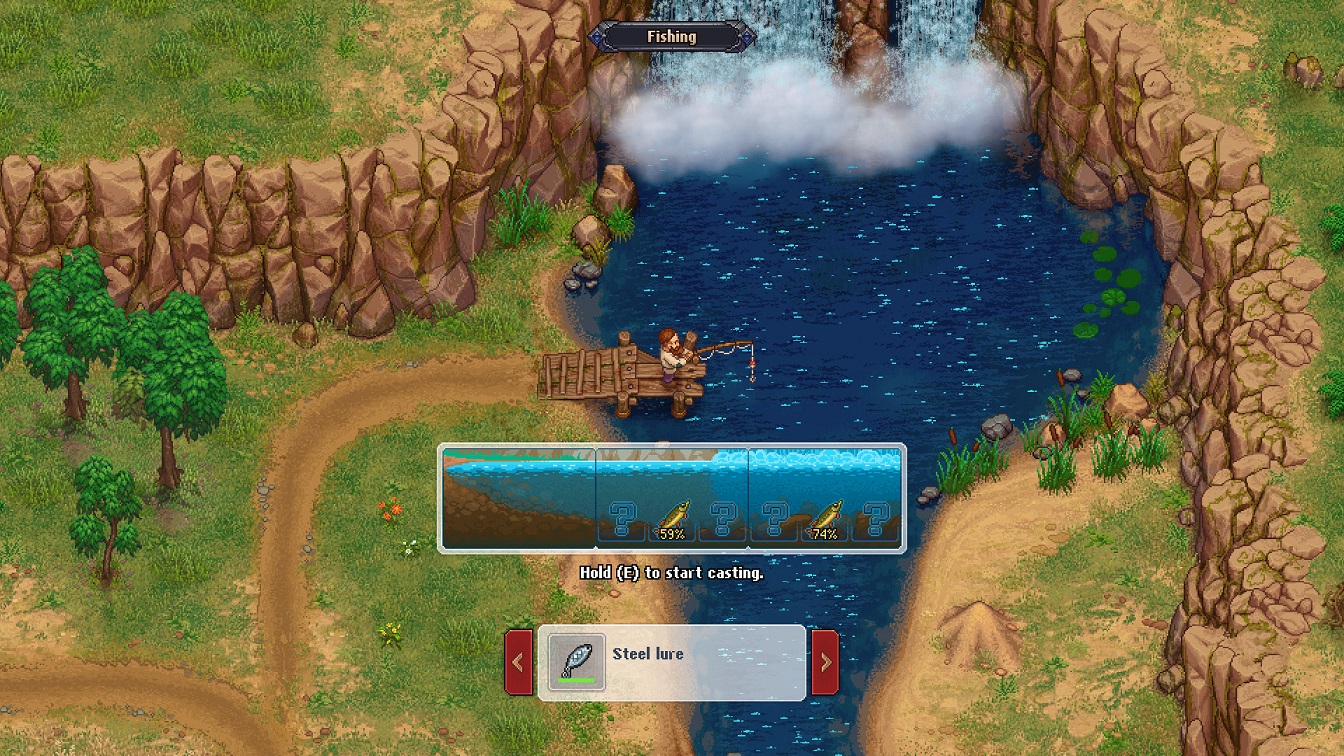 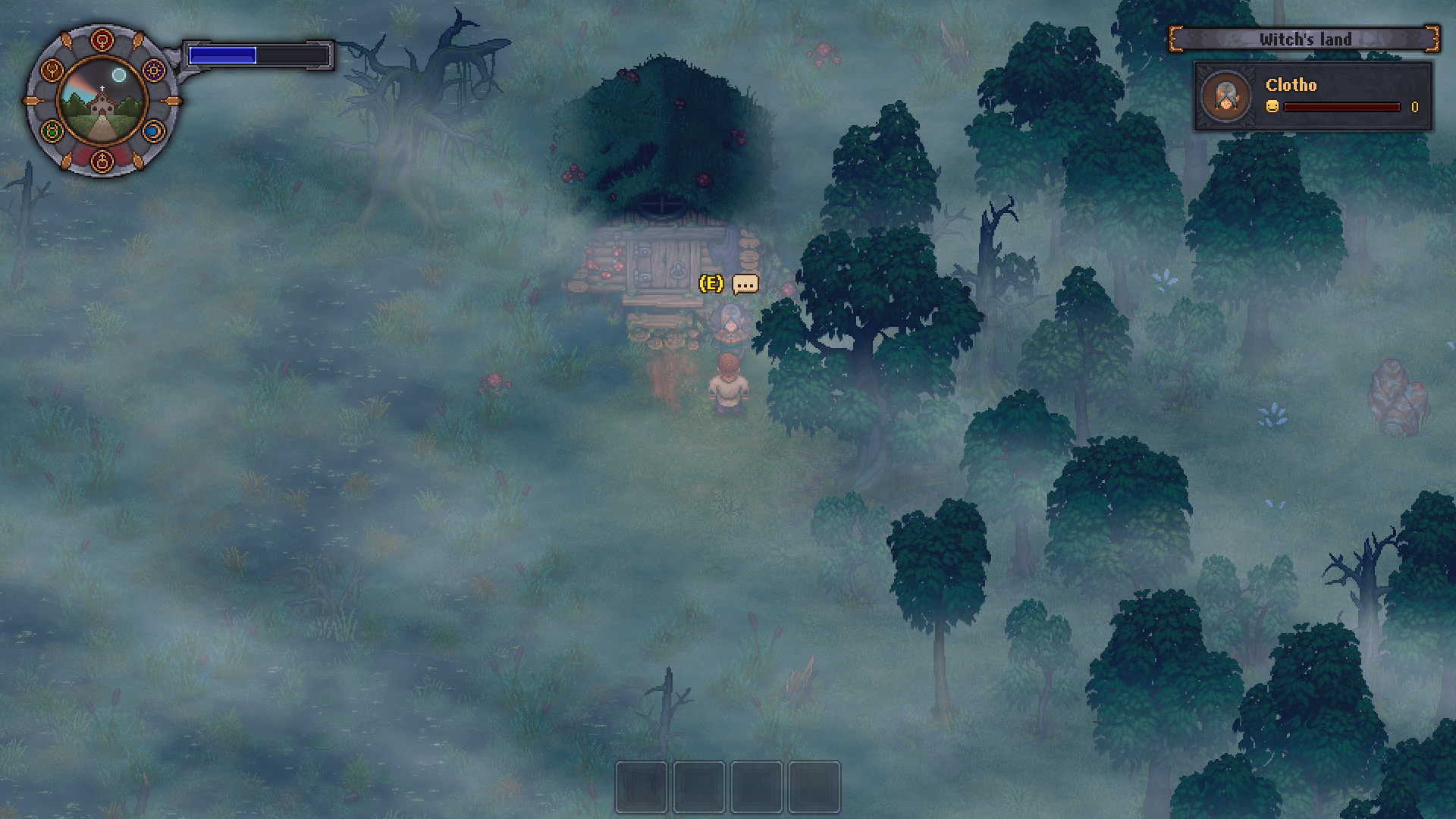 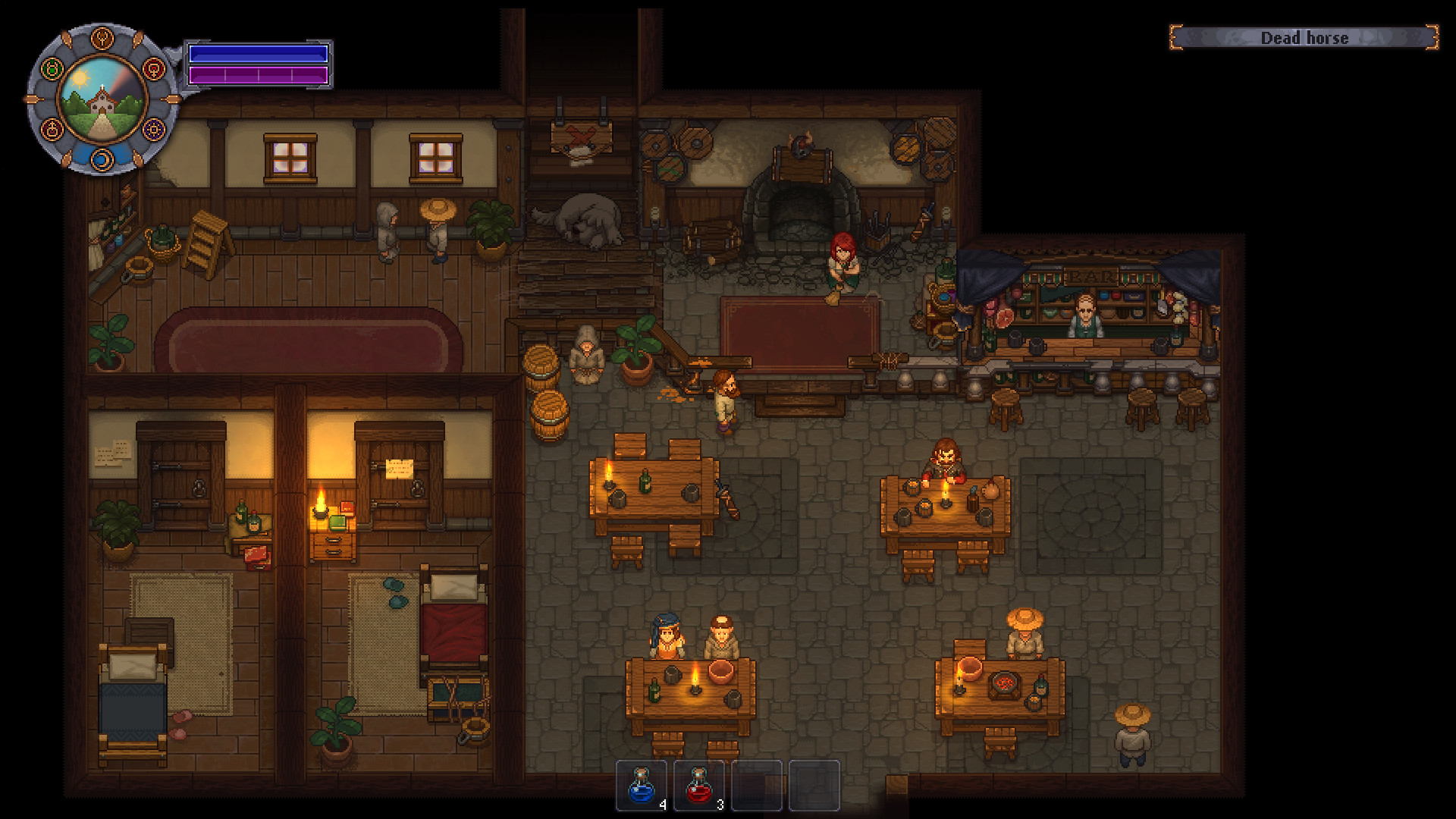 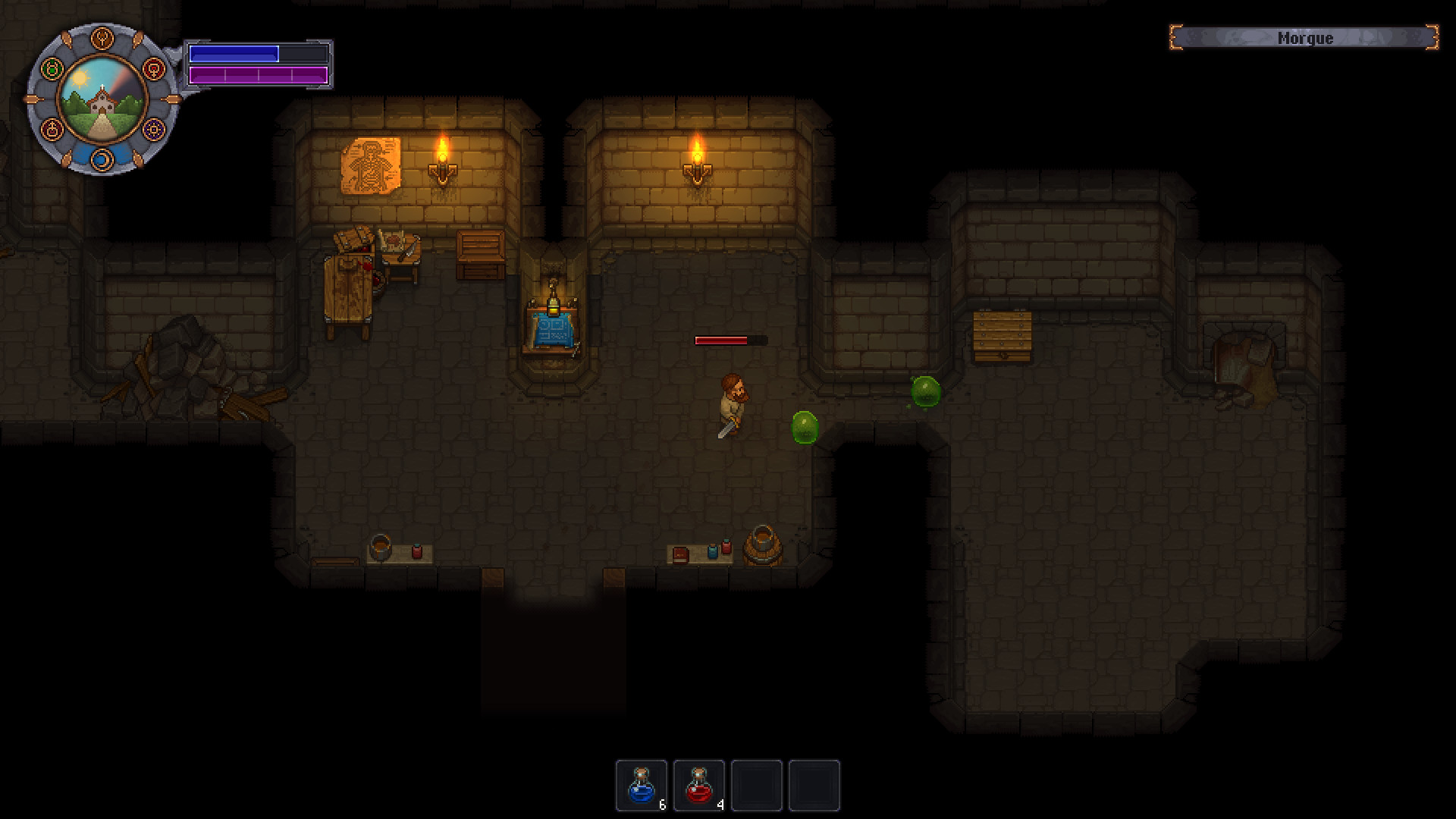 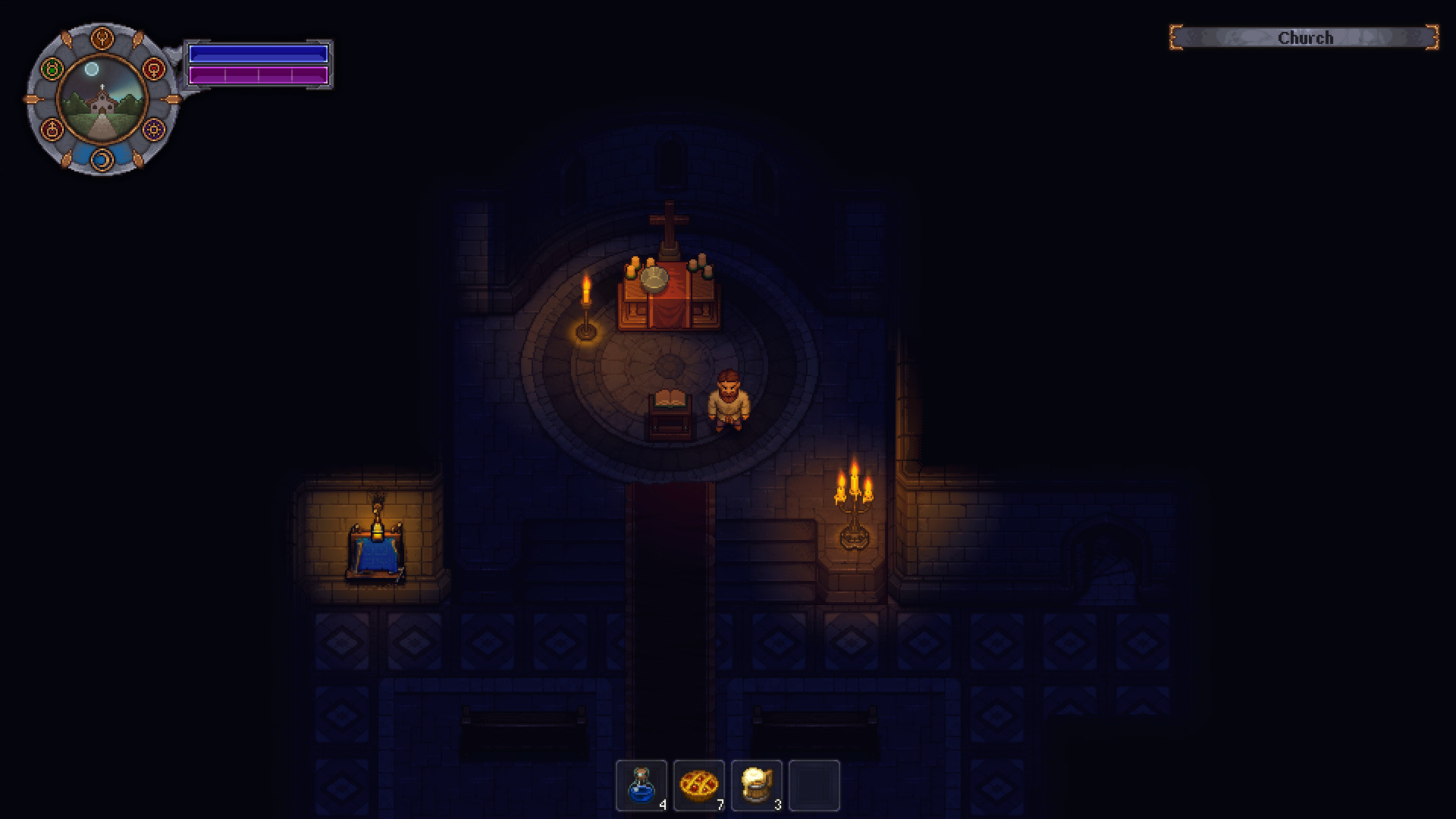 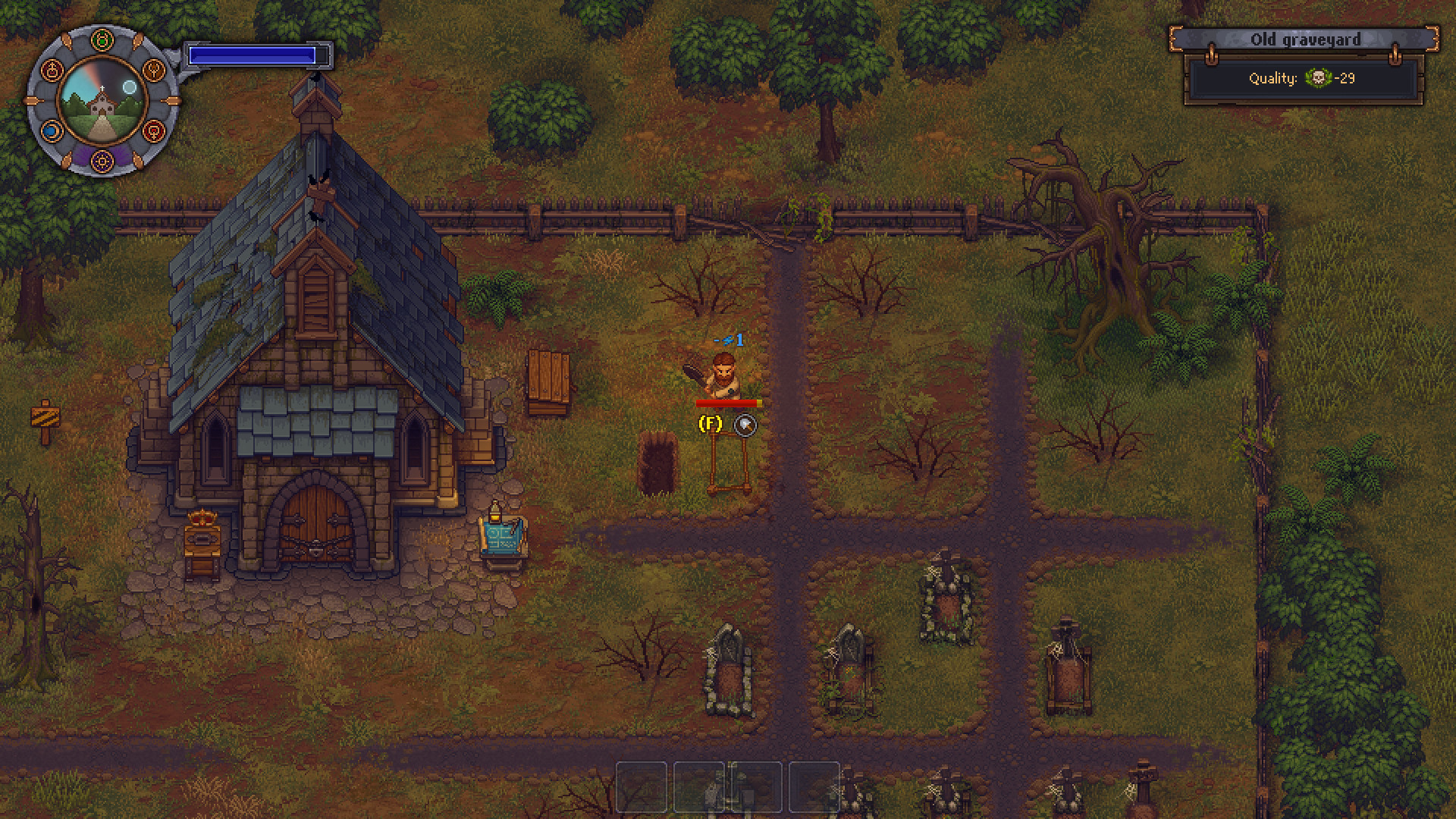 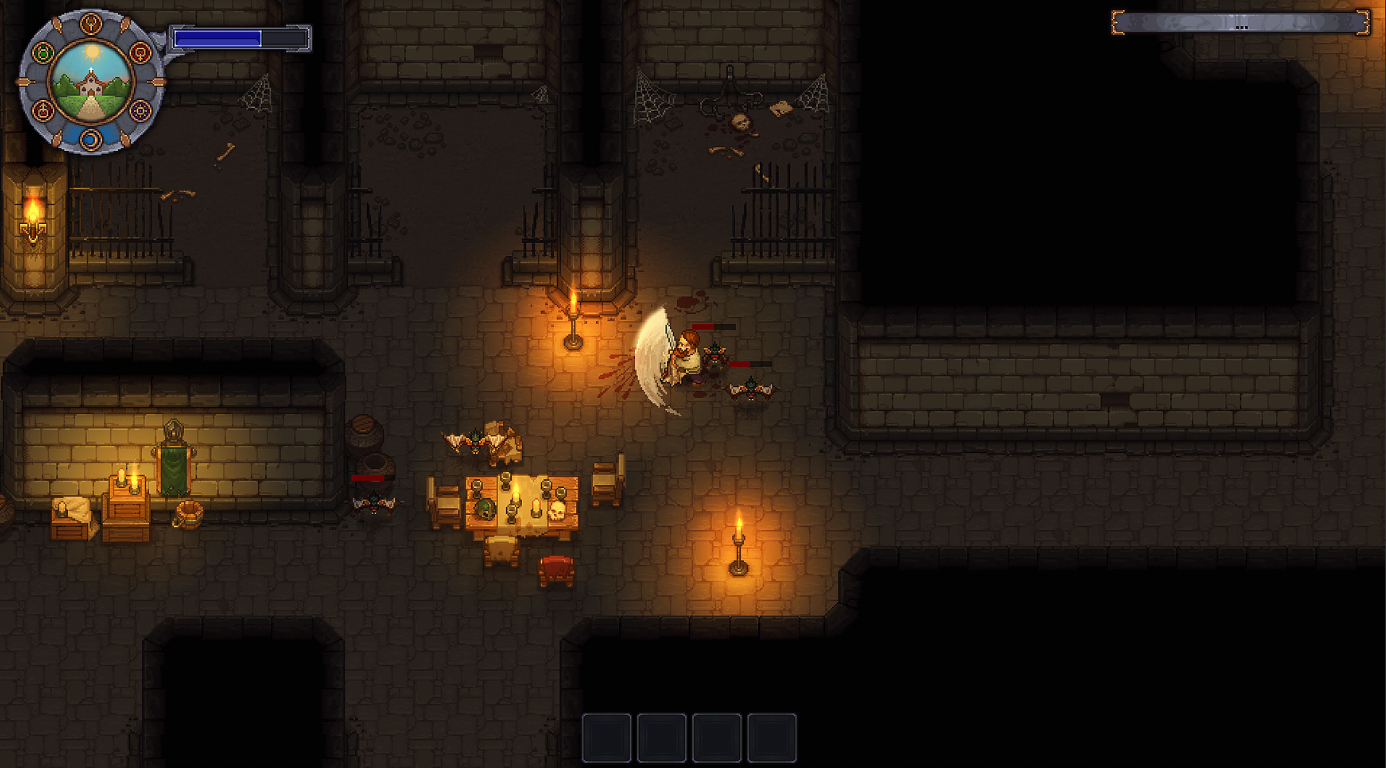 Now it’s not all sunshine and rotting corpses. OK it is mostly. But the fact of the matter remains, there are always little points for improvement, as minor as they may be. The only real issue I found myself stumbling on were the tutorials. As you go through the game, you learn more and more about the world and the resources you collect. Some will take a while to wrap your head around. But more concerning are the ones that make absolutely no sense until you’re formally introduced.

For example, consider my dealings with one Ms. Charm. I needed to convince her I was worth talking to. So I return on her day in town, confident. I had cleaned up the graveyard a bit, I had done some hard work and I had dealt with the death of this town. Keeping the townspeople safe from the knowledge that one day, perhaps sooner than they would expect, I too would shepherd their bodies back into the earth. But that didn’t mean anything to this lady. I walked up and there was a greyed out response called “convince her”, requiring 5 items that I could only read as being “energy orbs”. So that day I left no closer to my goal, and unsure of how to proceed.

Similar roadblocks started appearing later down the track. Perhaps the most egregious was the damn donkey. So there’s a donkey that brings you all the corpses, and at some point, he’ll start whining about capitalism and stuff and demand you pay him in carrots for bringing corpses. Which is not entirely unfair, all things considered. At the time this was dropped on me I had no idea how to go about acquiring the produce. I mean I don’t have tonnes of money to buy carrots since my primary source of income came from the whole “burials” thing. But now I need money, to buy carrots, to do burials, to get the money, to buy carrots. You can see my predicament. I suppose it is a testament to the range of actions this game provides. I was able to get through without tending to my actual grave-digging duties for a while. Hell, you may find you enjoy the game more when being forced to try new things and finding new things you enjoy more than what you were doing previously. The fact remains though, this game is not above leaving you in the dark, unsure or unable to get past challenges for quite some time.

The other issue I have is that the town’s too bloody far away. This game necessitates travelling into town on a near-daily basis, to complete and hand-in missions and such. So why is the main part of town such a hike from the player? It can take a large portion of the day to hike out to a chosen character. Considering they are only around for one day, you can easily miss characters through no real fault of your own. Playing through, I have unlocked more expedient methods to get into the town faster. The fact remains though that this is a (still rather lengthy) shortcut to something that had no business being that far away in the first place.

The awkward truth about Graveyard Keeper is that it has flaws that I really want to overlook. It is the first game in quite some time I have felt truly invested in just kind of pottering around in the game world. It just really plugs into that cookie-clicker part of the brain. You just keep on climbing step by step, incrementally improving. The problems are there though. The game is at times obtuse about how to go about solving some problems or gaining some resources. Rest assured, if you explore for a bit you will find your answers in time. The simple fact of the matter is that these are big annoying issues at first but soon recede into the background. So as it currently stands, I very much enjoy this game.