The Chefs are back in the kitchen again, slicing and dicing their way to success with Overcooked 2, the latest addition to your party game must-have list and the sequel to the extremely popular Overcooked. The original has been one of those co-ops that everyone must have on their console since 2016 and I’m here to tell you that Overcooked 2 is no different. If you’re stepping into Overcooked 2 looking for highly in-depth storyline then turn away now; this is not that kind of game… and honestly it never has been. While in the original, the core of the plot was about protecting the world, you simply did that by doing well and cooking great meals.

In Overcooked 2 not much has changed. You’re still saving the world however in this part, it concerns the feeding of the Unbread. The Unbread are undead loaves, which the haphazard king has unfortunately summoned and called forth after having read from the Necri-NOMNOM-icon.

When it came to the original Overcooked there’s no denying that the game was and still is fun and entertaining. It’s a perfect mix of classic party game chaos but it was always limited. Beyond finishing the games campaign, there wasn’t much to do and you’d find yourself left simply perfecting times with old friends or having short lived fun with new ones.

But that’s why the head chefs got together with the creative minds over at Team 17 and promised to offer up bigger and better content. Now with its all-new recipe, Overcooked 2’s menu’s have expanded. With more levels, dishes, exploration, and characters on offer than previously it’s no wonder the game looks better than ever before.

Of course that might also be because it does look better, too! They’ve given a boost to visuals, performance and game mechanics that will have your inner chef shouting like Gordon Ramsay in no time.

The boost to game mechanics are all designed to make the gameplay even faster and more chaotic. An option has been added to the game to throw ingredients, which sounds extremely useful and handy, but is anything but at times. In practice it should allow chefs to get products quickly from one side of the kitchen to the other and reduce time spent, thus increasing orders processed, but aim and quantity are everything. You can also accidentally throw products into unreachable places, which means you will only lose more time.

Along with this the recipes you are used to cooking up a storm with have also changed. It’s time to pull out your spice racks and get festive as Overcooked 2 adds more international cuisine such as pizzas, sushi, sashimi, burritos, fish & chips and much more. With all these new game mechanics and recipes, it’s going to take chefs a little time to get the hang of their kitchens and start racking up the Michelin stars but you’ll soon find that there’s plenty of cooking to be had.

“Known as “Dynamic Kitchens” by the creators of the game or as I like to refer to them “What in the blazing heck is this *#$%! %#&@$ Kitchens” they evolve as your game timer ticks down.”

You’ll now find 47 mayhem-filled kitchen scenarios for you and your friends to take on in Overcooked 2. As with the first game, each adds elements of fantasy and flare but are now combined with even more trickery and ingenuity than before. Known as “Dynamic Kitchens” by the creators of the game or as I like to refer to them “What in the blazing heck is this *#$%! %#&@$ Kitchens”, they evolve as your game timer ticks down.

For example, during one play session we were cooking in the (burning) basket of a hot air balloon as it was falling with style through a thunderstorm. If things weren’t hectic enough, roughly just over half way into the level the balloon suddenly drops drastically and after a rather abrupt crash landing in a half-ruined sushi restaurant we are back to cooking in an entirely new location with all new items added to the menu. These levels are fantastically designed and thanks to the new and dynamic environments you will not be short of fun, laughs and anxiety as you tackle any of Overcooked 2’s various modes.

A particular feature that fans of Overcooked begged for was an online mode and thankfully the developers have listened and delivered here. Online multiplayer allows two to four players to join game rooms either by public selection or invitation (which can also be done via the same menu). I got the chance to try this out with Checkpoint’s own Luke and it worked exceptionally well. We played the games main story co-op, surprised by how smoothly things ran online.

It was an all round fun experience, however I don’t suggest this ever being attempted if you can’t communicate with the other person as the sheer anxiety I felt as flung food was mounting at my feet was only sated by my ability to communicate “stop throwing food at me”.

But it’s not all about playing the main game together online, another online mode for you to share with friends or unwitting chefs is the games Arcade mode. This is essentially a bunch of randomly generated kitchens that all somehow manage to work and offer up some decent laughs and excitement. 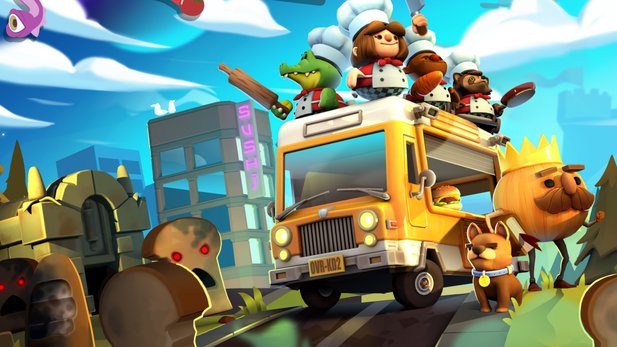 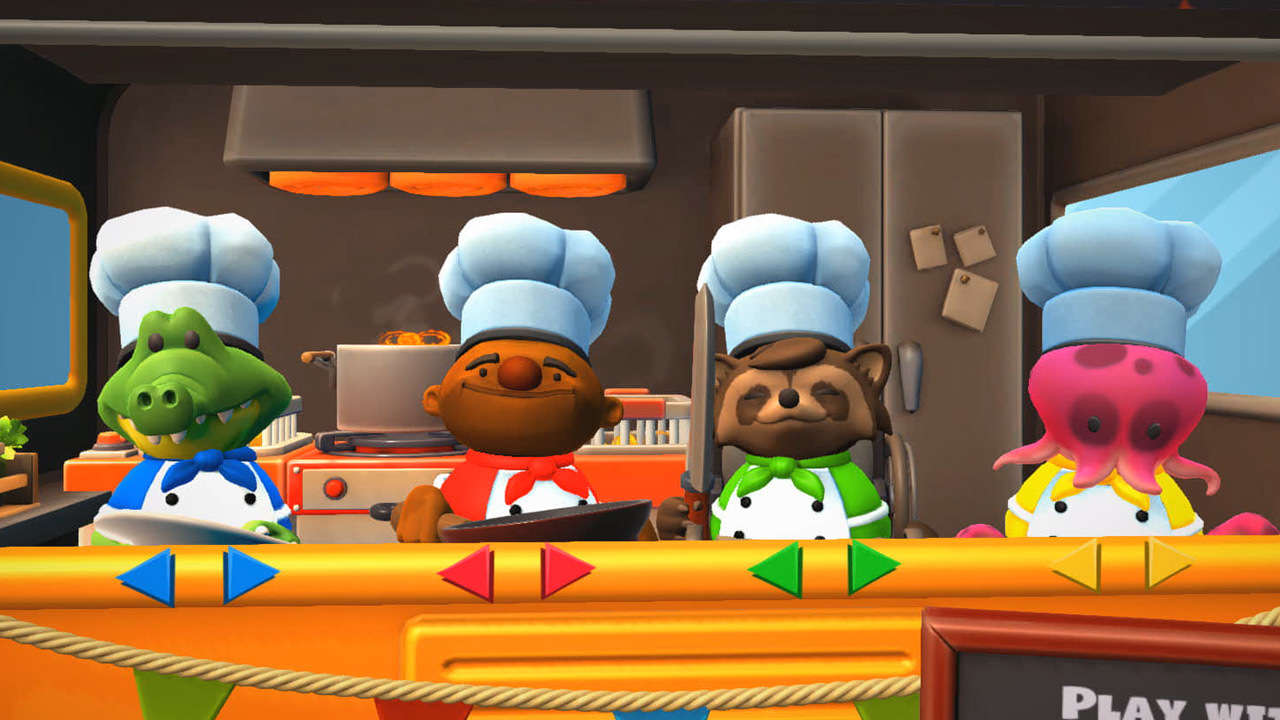 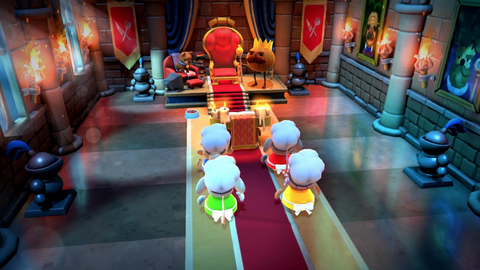 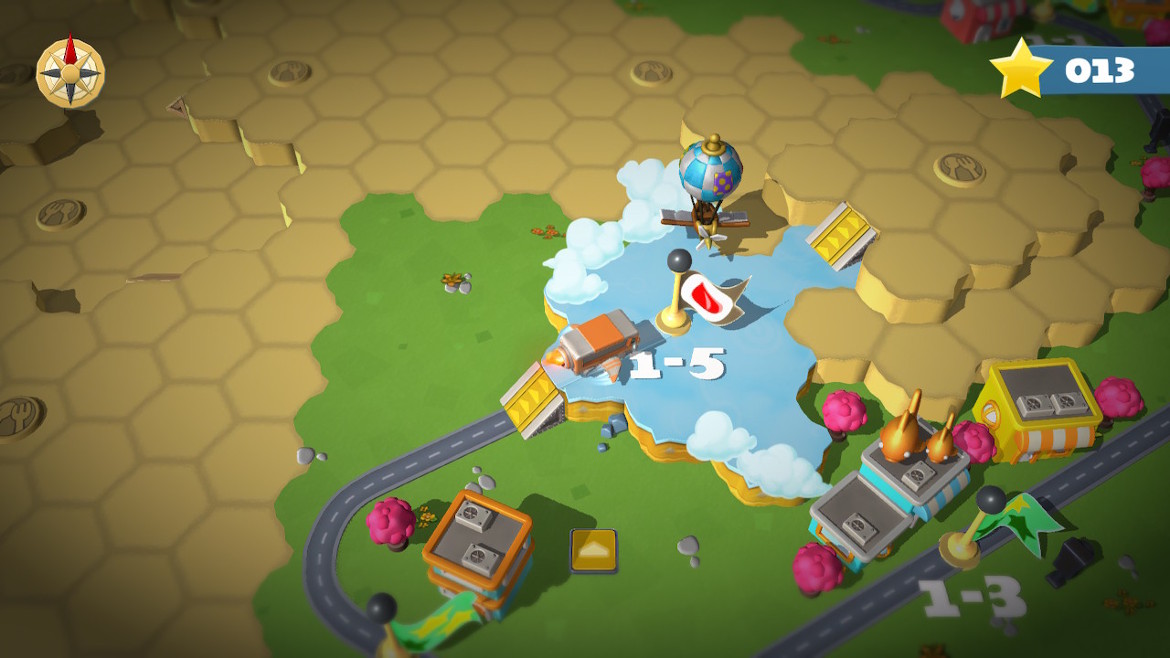 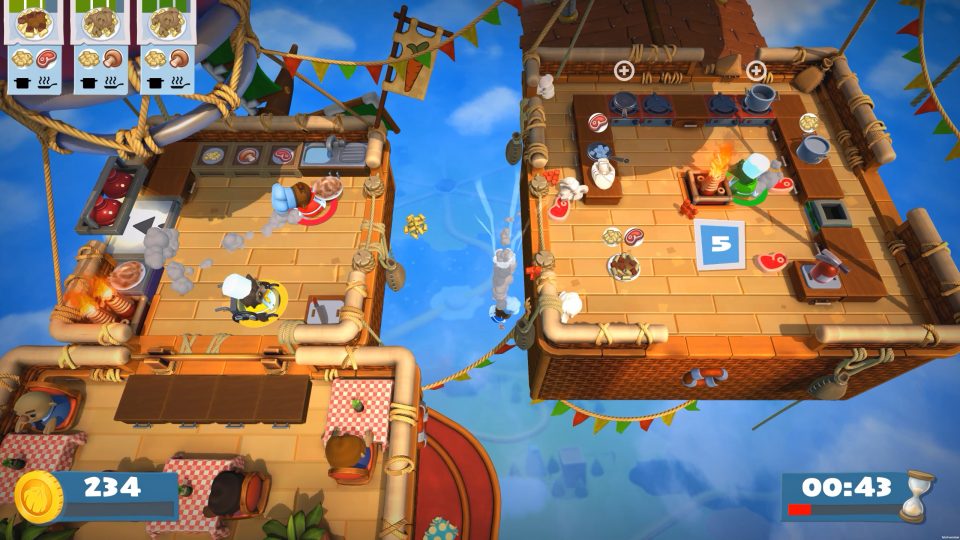 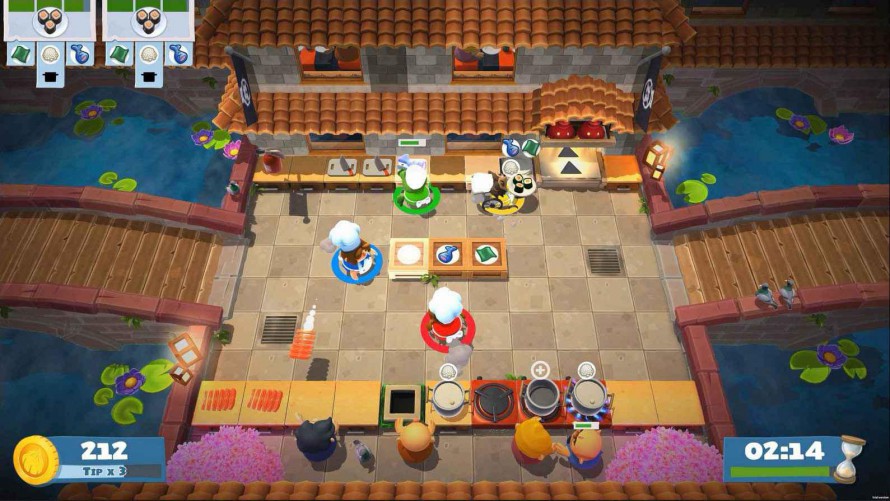 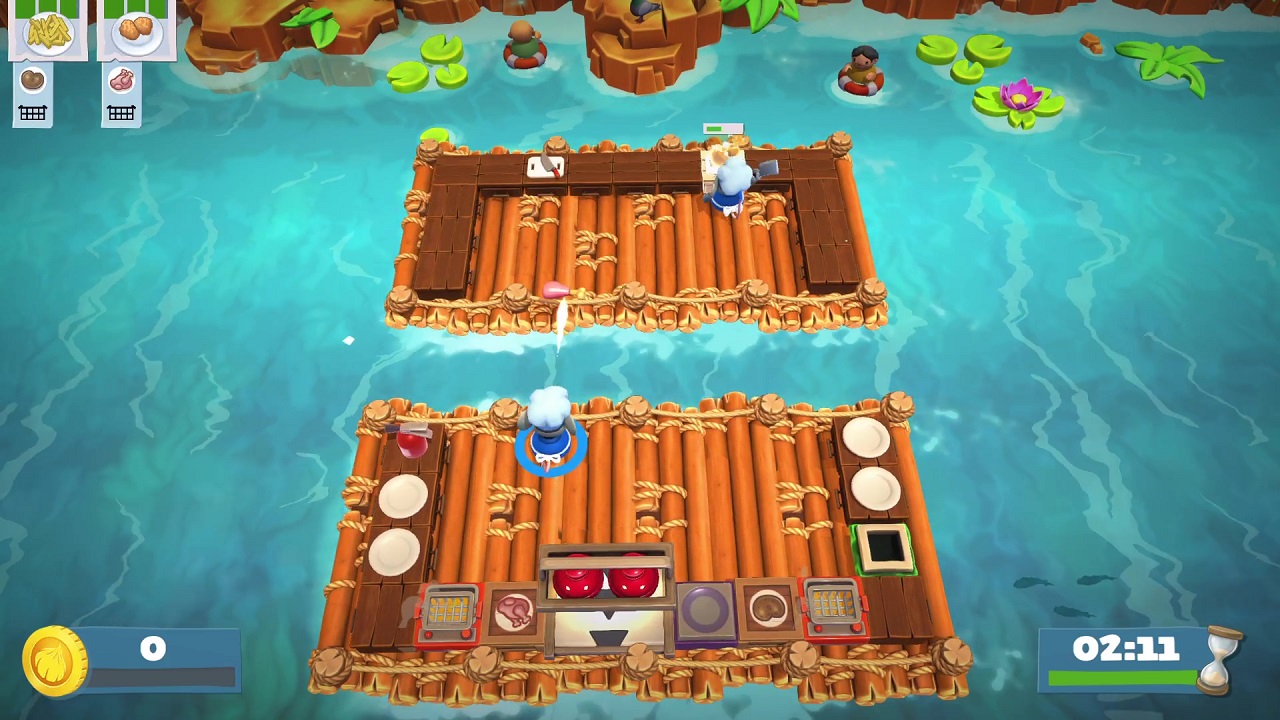 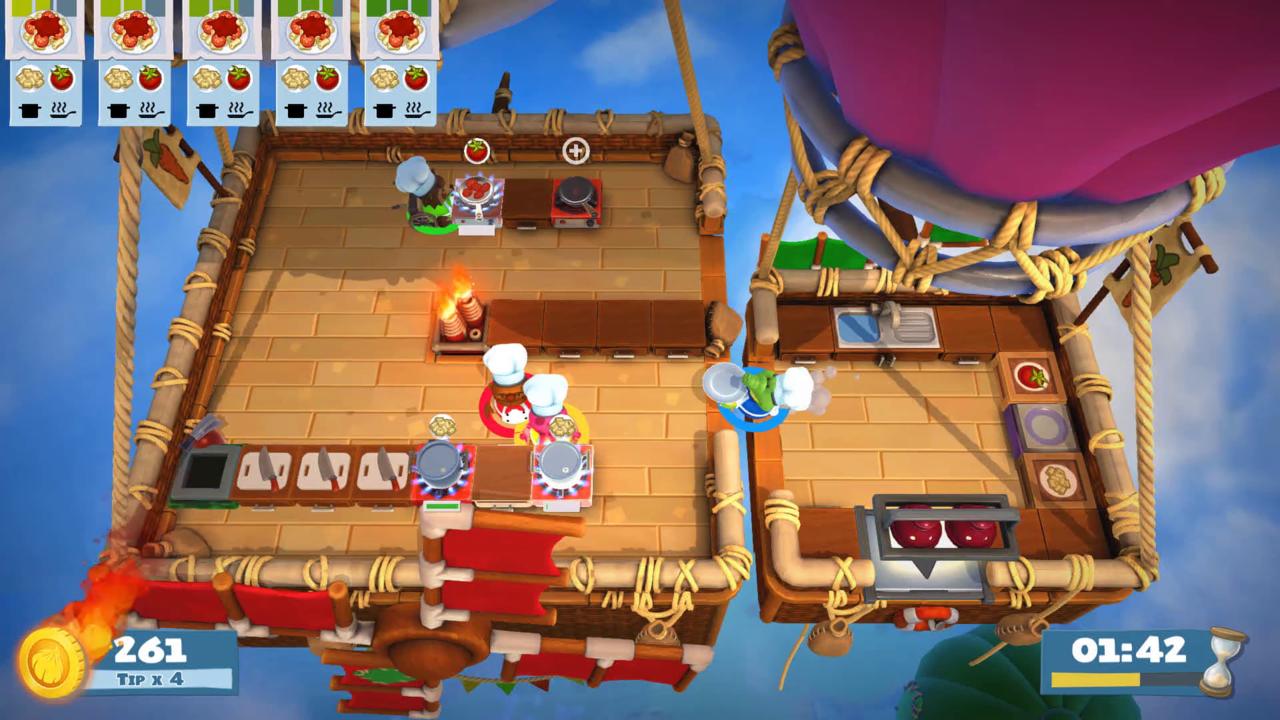 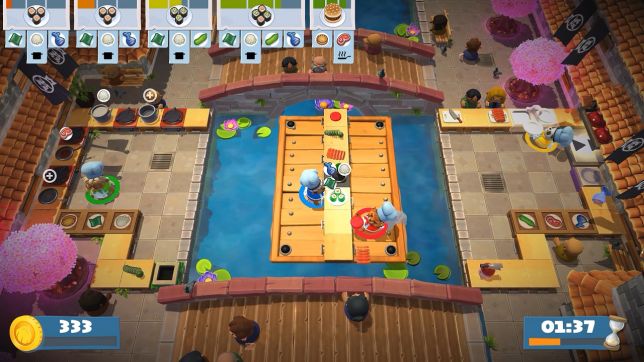 Overcooked 2 is going to put your coordination and your friendships to the test as you battle your way through its numerous levels. Its degree of difficulty is for the most part quite forgiving… at first. As you slice, dice and serve your way up through the first few levels it treats things as a warm-up, still very easy and definitely a way to introduce beginners to the game without scaring them off. All that changes rather quickly though as Overcooked 2 reminds you exactly what it and the first game are all about. From the moment you hit the second world of kitchen scenarios things start to heat up and soon boil over rather quickly.

Now I hear you saying “but you can’t play Overcooked solo”, and well whilst that’s true for the most part almost all chapters can be played through alone (but honestly who wants that!). The difficulty does start to scale with the increasing number of players, but so does the fun and ability to coordinate. And lets face it, even alone it will most often take you several attempts to complete some of the more complex kitchens. Which is something you’re going to want to do to unlock those “secret levels” of Kevin’s.

Despite being a simple concept that we’ve seen before, Overcooked 2 serves up the mix of new and old perfectly, thriving on the chaos it causes. The different situations produced by these hilarious scenes will quickly have you tossing the meat and throwing the cheese as you scramble to fill endless orders whilst the mayhem ensues.