There’s something satisfying about taking on hordes and hordes of enemies as they all come at you in waves, just waiting to be blown to pieces that move you closer towards your next sweet upgrade or piece of hidden treasure. Strange Brigade taps into this feeling consistently; including a very kitsch style that heavily references the 1930s with reckless abandon. Add in a chatty narrator, plentiful secrets to uncover and addictive no-fuss combat and you have a shooter that doesn’t take itself too seriously – and it’s all the better for it.

A motley crew of adventurers, the titular heroes are out to find treasure and fight mythological creatures like mummies, giant scorpions, minotaurs and zombie pirates – just as a few examples. Each mission is segmented off, usually leading you through a linear main story path with plenty of diversions and secret areas to uncover for those with a more curious mind. I didn’t engage with the story of the characters and lore too heavily if I’m being honest; each stage opens with a cut-scene, you parachute into the map and away you go.

A witty narrator gives you tips as you go along and helps to move along what story is there; initially I found him annoying but I grew to appreciate him, including the regular breaking of the fourth wall when he gets annoyed at your lack of action, like when you pause the game or put the controller down for just that little bit too long.

I also appreciate the diverse characters (including two women, one of them a POC! Great!), with one more free character releasing on launch day. They each come with their unique abilities that can also be modified as you play, and you can switch them up in-between stages if you want to as well. The entire game can be played cooperatively with up to four players, which is where Strange Brigade truly shines and makes for some entertaining shooter action.

While it may be a formula that we’ve seen many times before, the game confidently throws you into the deep end with severely large amounts of enemies coming at you at any given time. Your weapons are useful enough, but there are strategically placed traps littered around most of the large battle areas, just begging for you to activate them. By shooting the relevant switches, you’ll have spikes shooting from the floor, fire spurting from doorways and spinning blades just waiting to slice and dice any beasty dumb enough to get in the way. 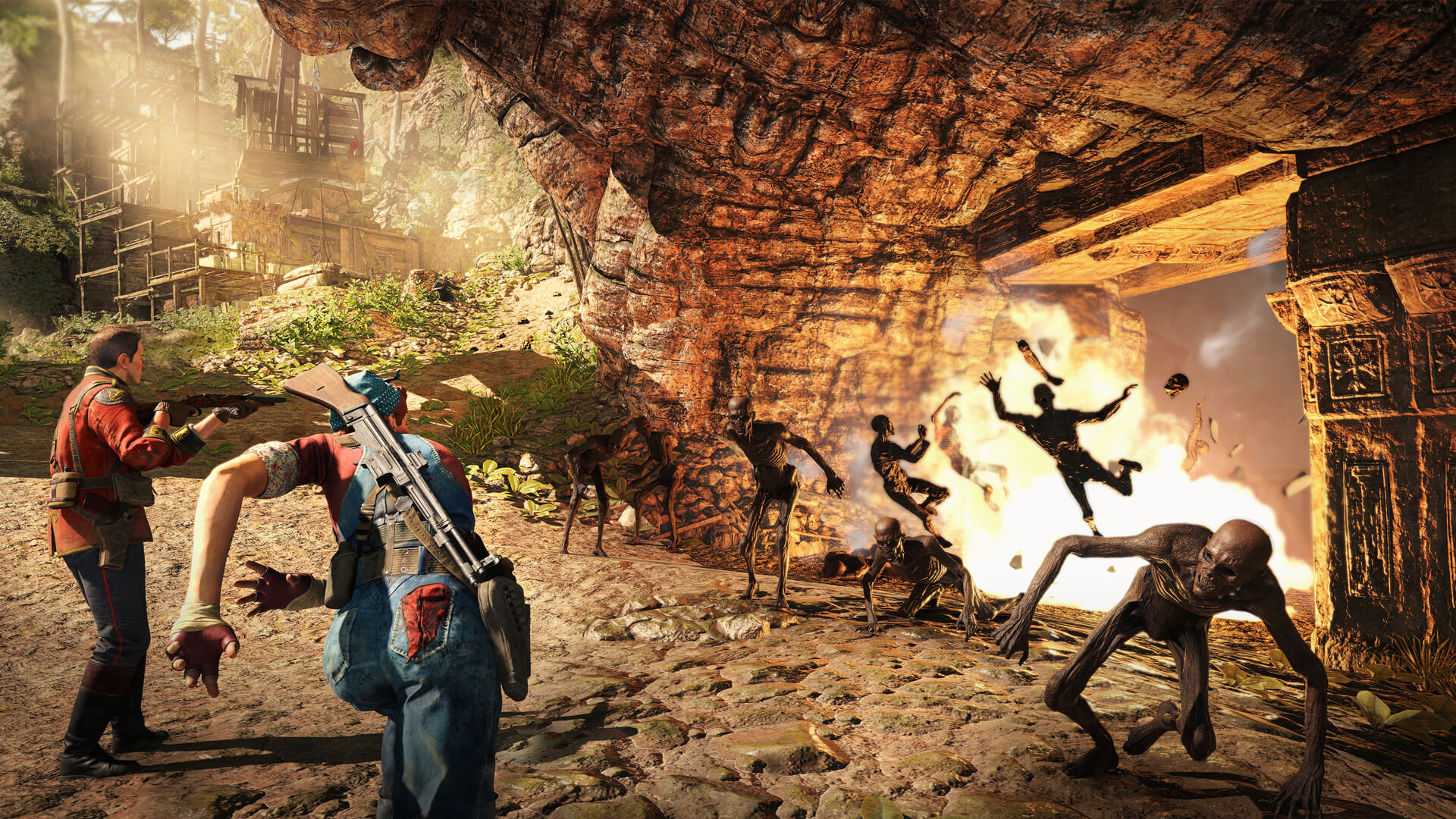 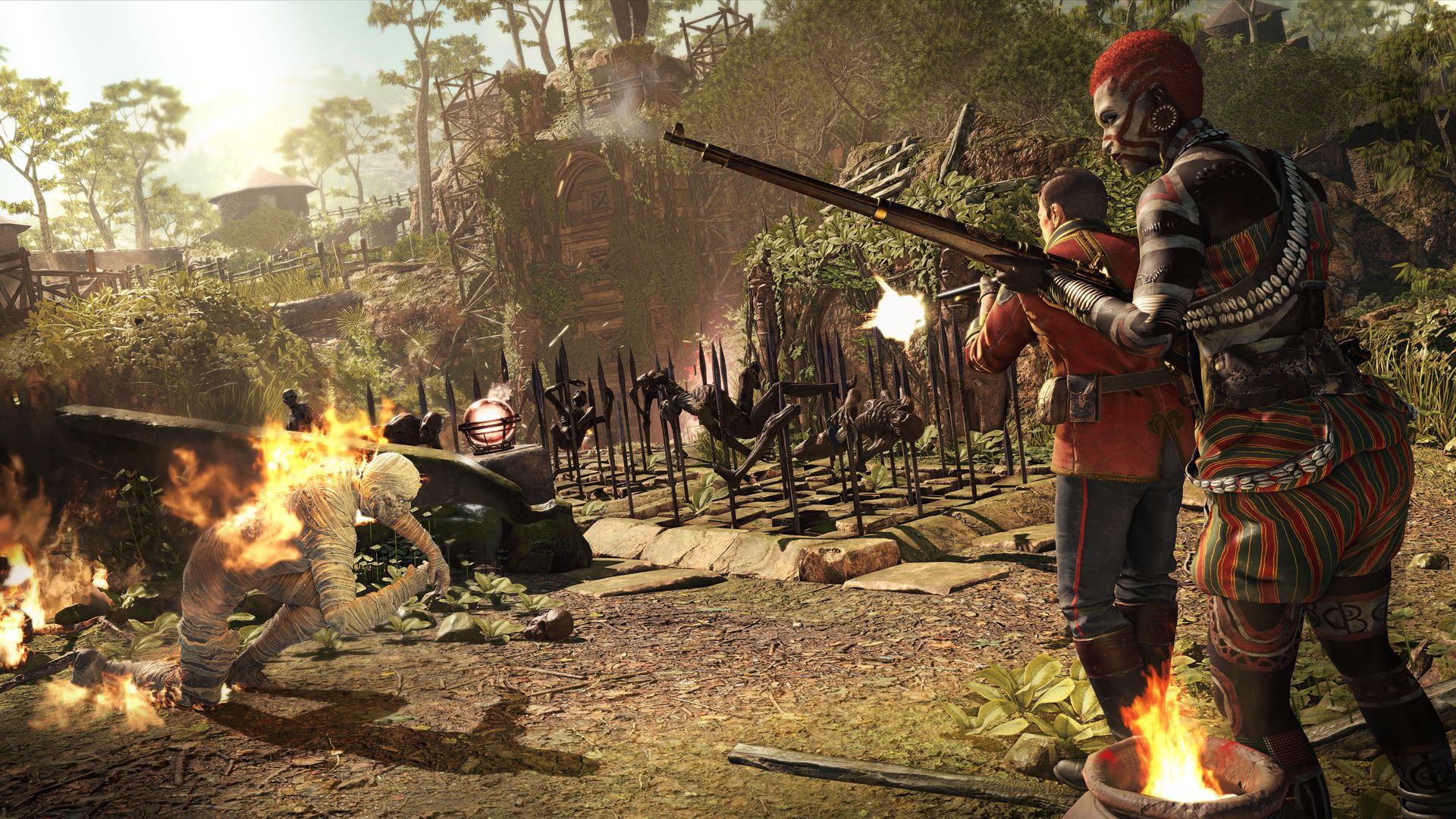 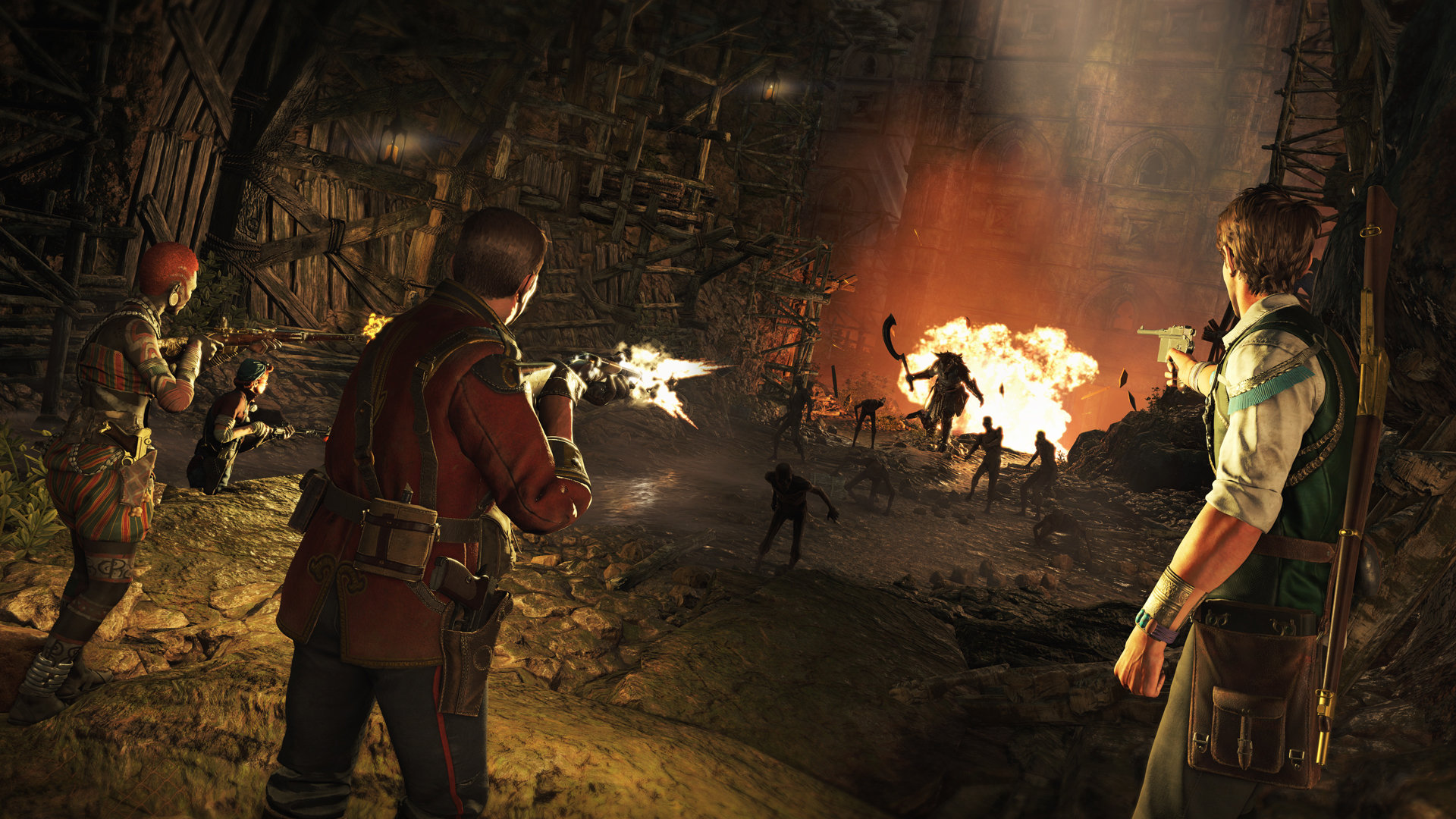 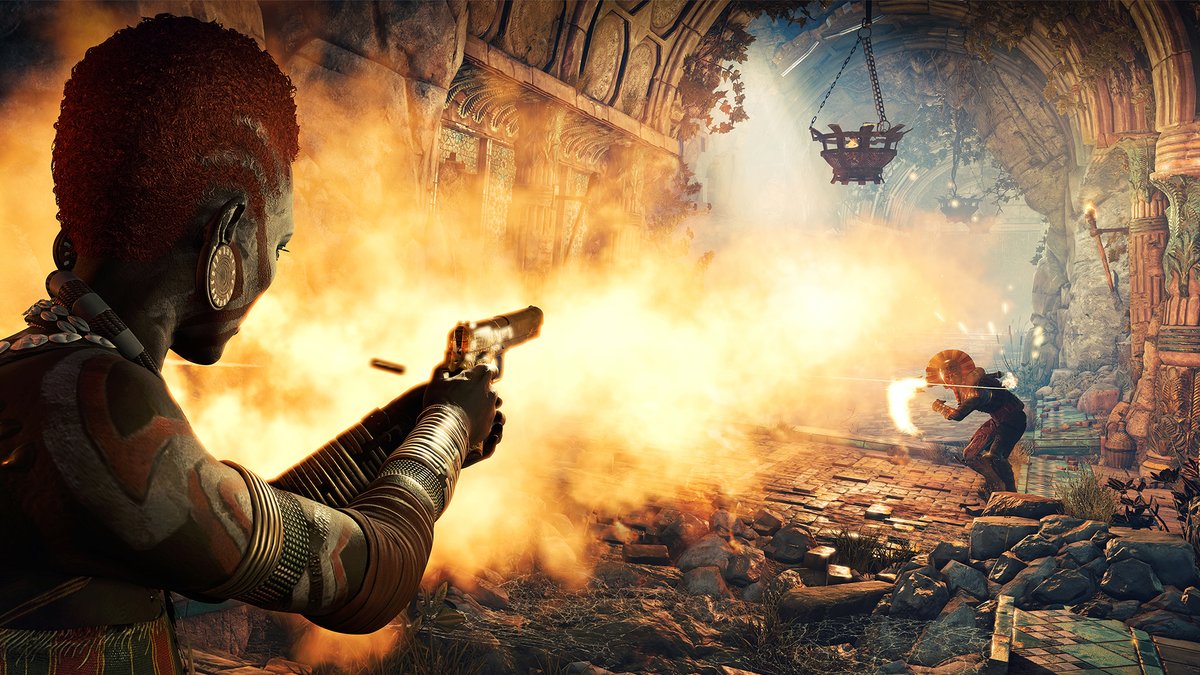 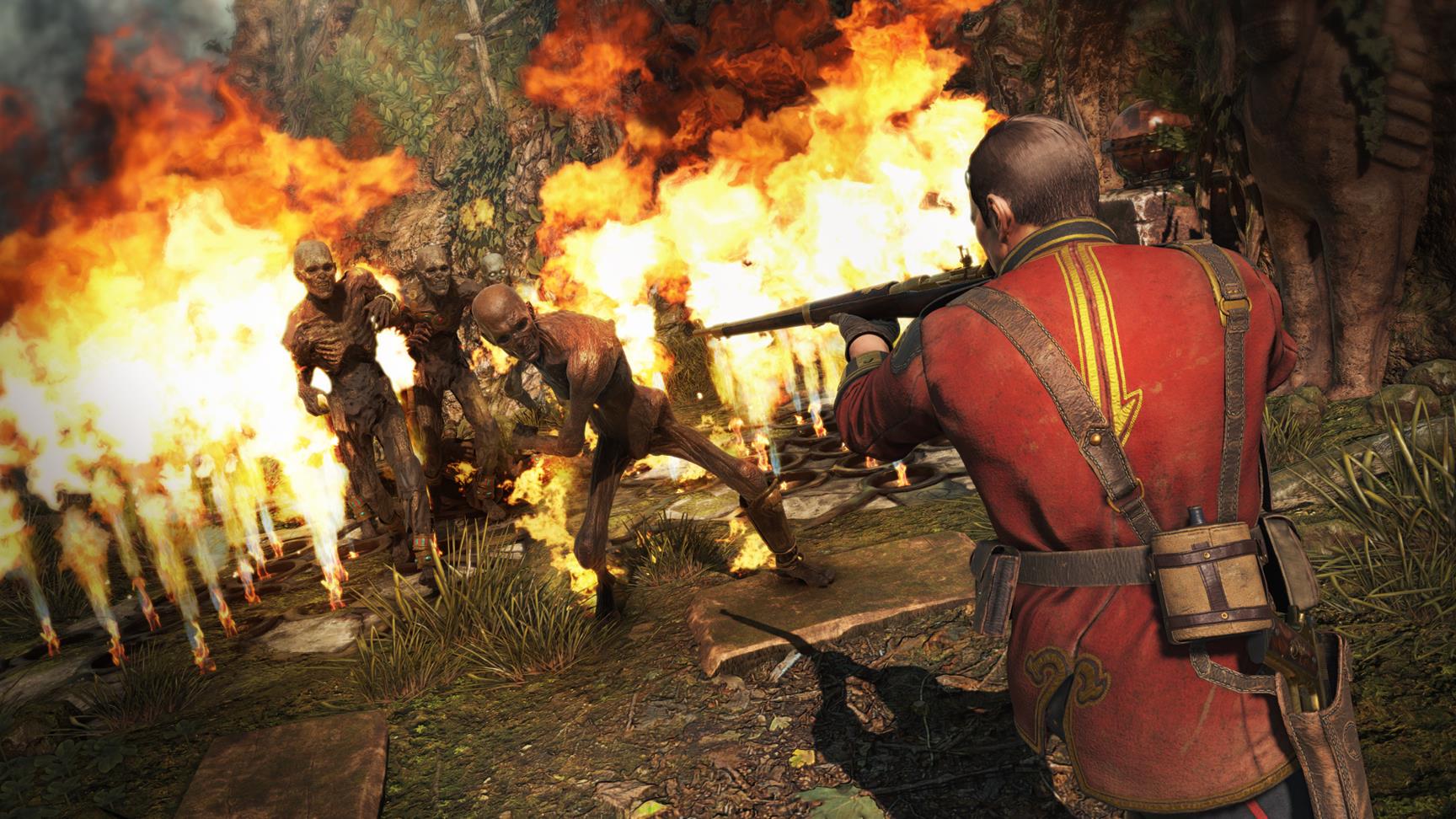 The AI isn’t particularly strong, but that’s part of the fun; their attacks ramp up as new enemies are introduced, but really they all lumber directly towards you at a different pace, which makes funnelling them into one of the various traps simple and enjoyable. That’s not to say combat is easy; I lost count of the number of times we got overrun, thinking that we had a grip on things but soon finding ourselves making use of the limited supply of health potions and having to reconfigure our strategy entirely once some of the tougher foes become regular pests.

Shooting feels good and punchy enough, though with some of the more damage-consuming baddies it’s tricky to know how much of an impact you’re having with each shot. The final blow is always incredibly satisfying with coins for upgrades flying into your character and souls used to charge your ultimate attack ready to be collected. I just would have liked some more feedback that my shots were registering on the enemies with larger health banks. Long distance shooting is often a chore too due to most weapons being more effective at close range; far away foes and some particular bosses highlight how difficult this is, especially when you’re constantly being attacked from behind at the same time.

Not just about shooting (though this is probably 80% of the experience), there are a variety of puzzles for you to solve. These range from shooting hard-to-find switches, matching symbols hidden around the map, memory tests and slide puzzles. Hidden pathways can be discovered by burning a path or bridges created from a well-placed boulder, while other more complex puzzles involve aligning laser beams and shooting cannonballs through the environment.

The puzzles aren’t particularly taxing or difficult once you know the trick, but they make for a nice distraction and a chance to breathe between massive battles, along with an opportunity to get more gold to purchase weapons and gems for upgrades. There are also cat statues that must be destroyed (the narrator really doesn’t like cats for some reason) and other collectibles to be found. Occasionally a creature will sprint past with a glowing bag in his hand – catching and killing him brings a reward of its own. 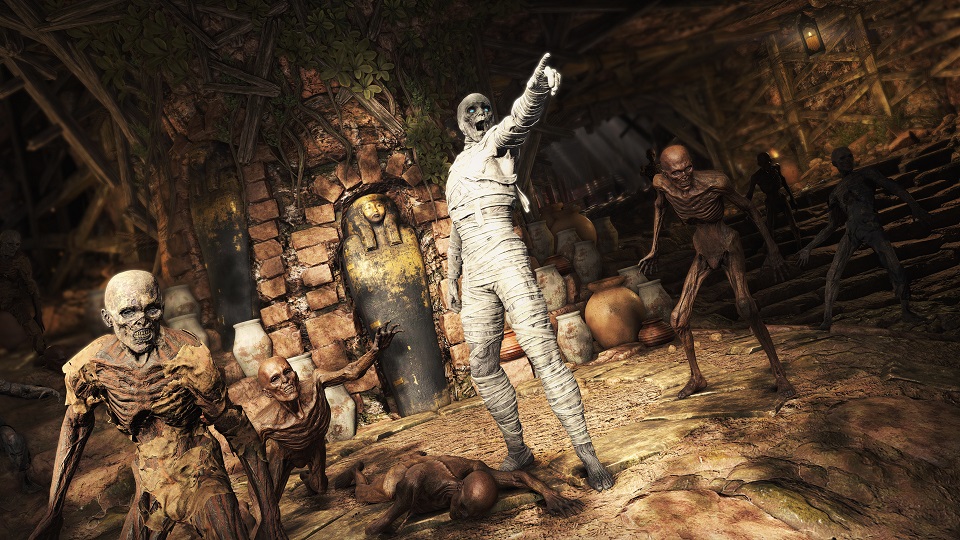 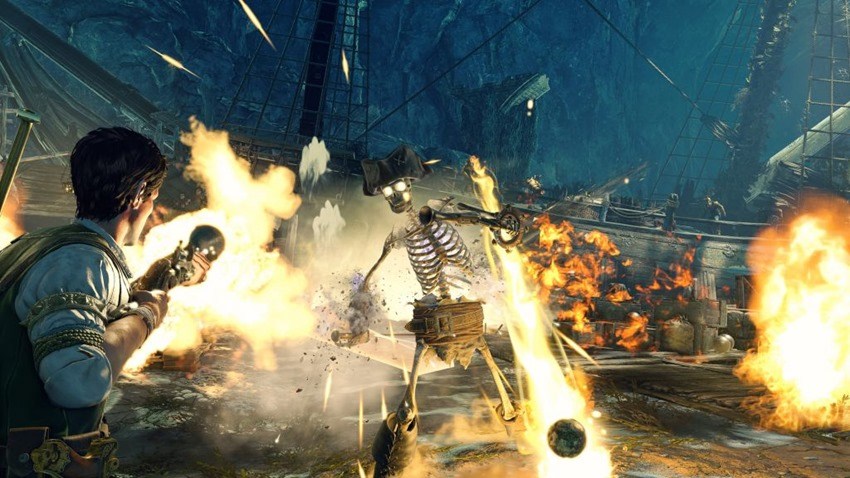 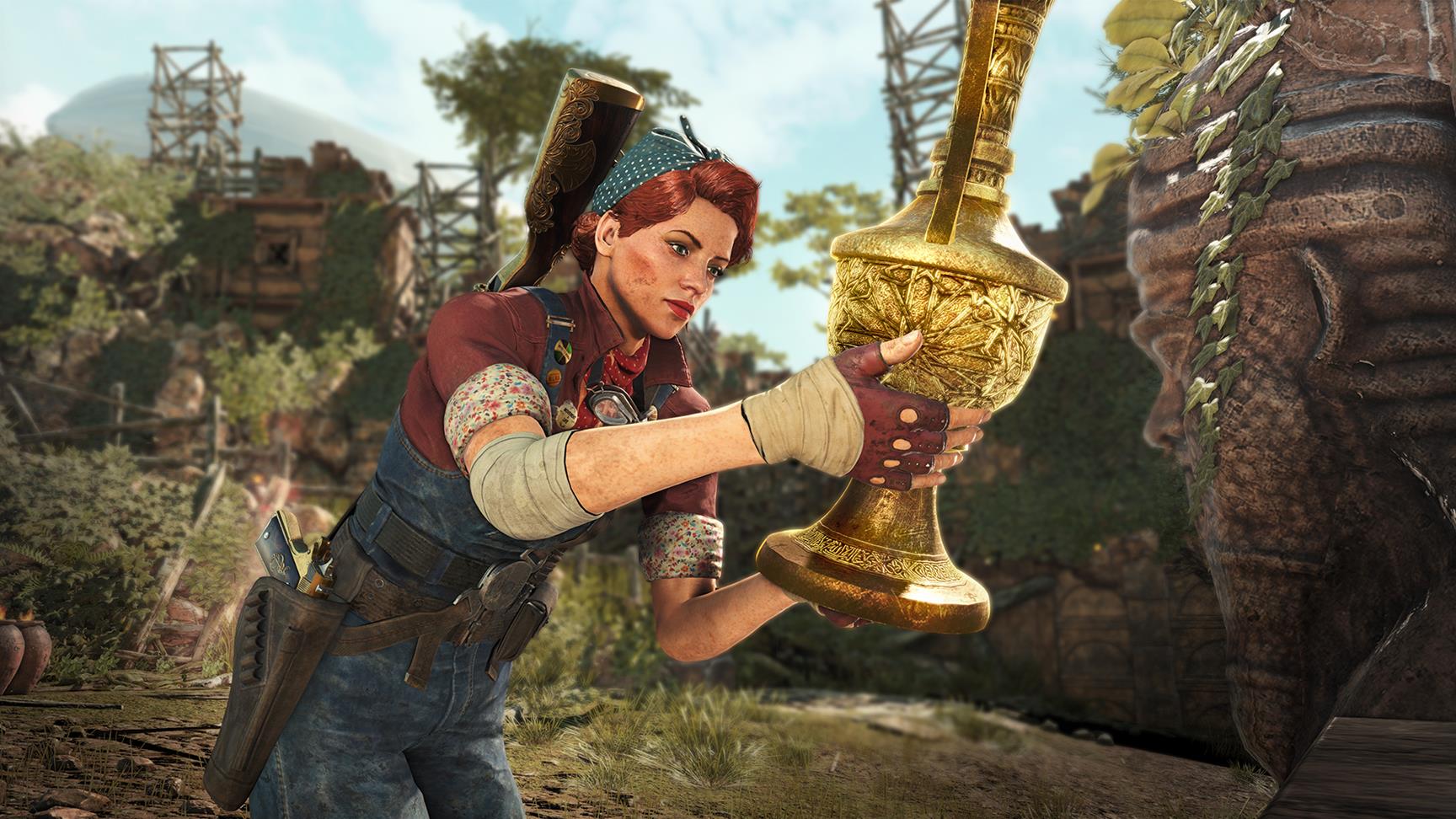 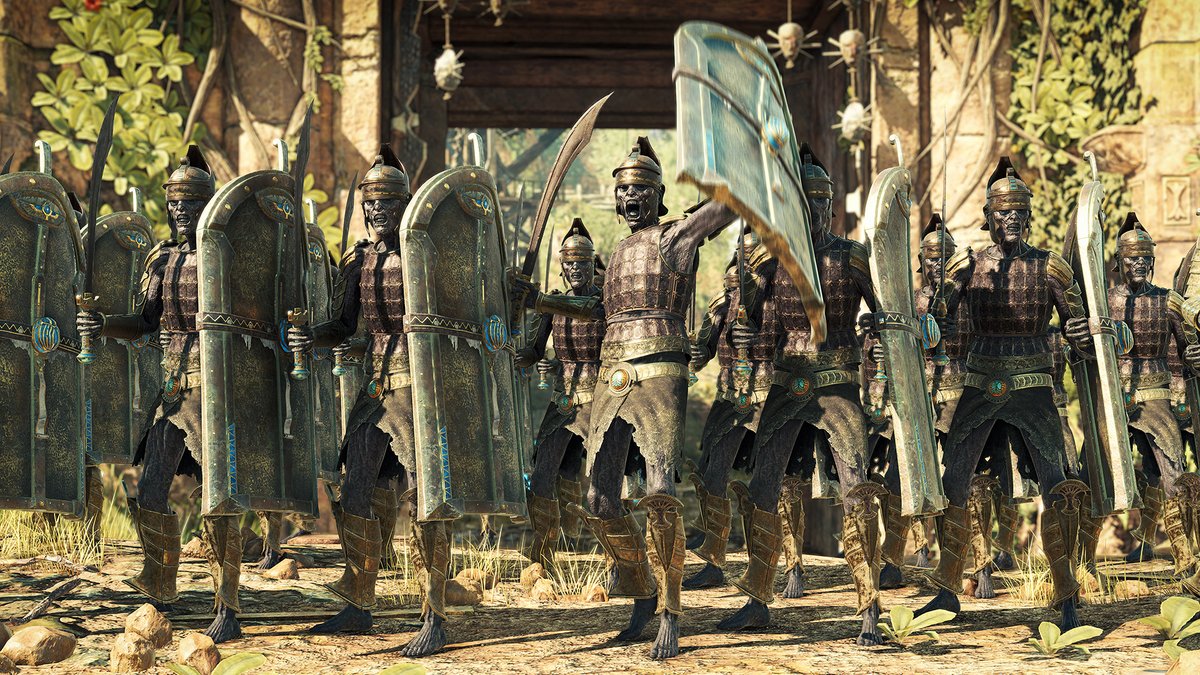 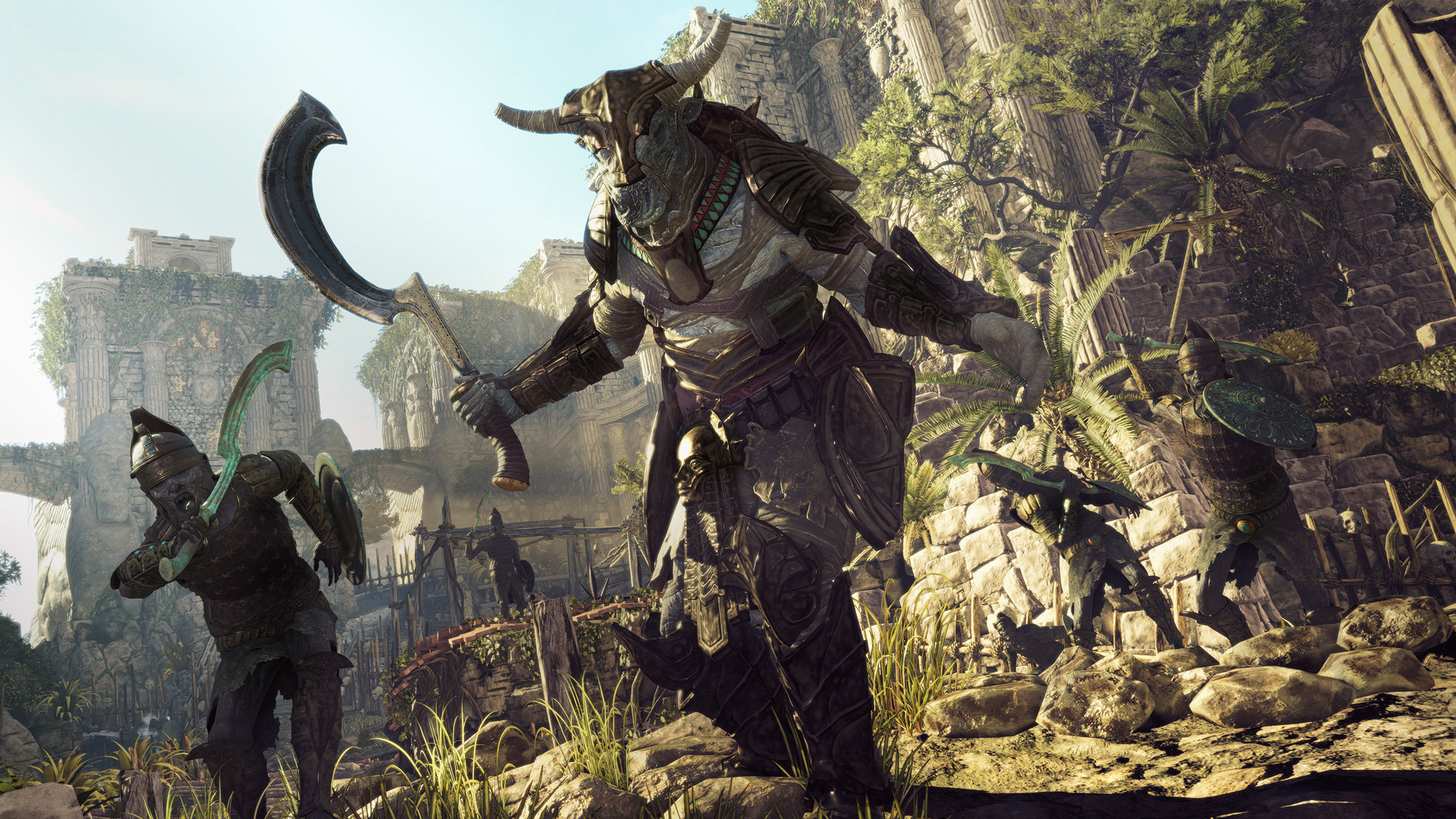 I was pleasantly surprised with just how many little hidden moments that I came across and how much I enjoyed the break in tension and action to explore the environment and find something special. The locations demand exploration too; from large Egyptian temples to twisting labrynthian marketplaces and glowing caves with treasure buried beneath pirate ships. These might be clichéd or familiar backdrops but they’re perfect here.

Once done with the story, the game also features two other core game modes that are enjoyable enough on their own; Horde Mode and Score Attack. Horde mode can be utterly time consuming in the best possible way, with a seemingly insurmountable volume of monsters to destroy. I can see this being something my friends and I return to more regularly than the story missions, as it endlessly provides that entertaining satisfying loop of kill, explore, upgrade and repeat.

Score Attack is also fun, providing an opportunity to compete against your own squad to try and earn more points than them by getting kills quickly, chaining together trap kills and combining your main ability to rack up the biggest combo. These stages are also specifically designed with this in mind, as traps and explosive barrels laid out to capitalize on the chaos. There are several sub-objectives other than just finishing the stage, such as taking no damage, getting headshots, using specific weapons, trap kills and so on. They’re short, fast and easily replayable, focusing on the most satisfying moments Strange Brigade has to offer.

The main criticism I can come up with is that, beyond the constant shooting of waves of enemies with some light puzzling, there isn’t much variety. If it doesn’t hook you in during the first mission, it’s unlikely to hook you at all, as it’s repetitive in its nature. It’s also enjoyable enough as a single player experience, but you’ll need to make sure you’re utilising traps more effectively and taking your time. It’s far riskier without the ability to get revived by a pal, so positioning is far more important. It’s fine as a single player adventure, but really multiplayer is where it’s at, and I can’t wholeheartedly recommend it if you don’t have friends to play with.

Strange Brigade blends together a bunch of kooky, clever ideas and a solid shooting experience to make a game that is, first and foremost, fun. With so many games emphasising the complexity of their characters, the depth of their story or the next attempt at revolutionising a gameplay mechanic, I sometimes forget that video games can just be entertaining and… well… a bit silly. In that sense, Strange Brigade is truly beaming with personality and made complete sense to me as soon as I picked up the controller. It won’t change the industry, but it will go down as one of the best guilty pleasures of 2018.