We Happy Few Review – Happiness is a choice

We Happy Few may have one of the most absurd and convoluted development histories within gaming. From a small development studio and Kickstarter success to one of Microsoft’s first party developers, Compulsion Games has certainly received a lot of attention during the development of their humble survival game. We’ve also seen an E3 trailer go viral, a drastic switch in the game’s core focus, Gearbox coming on board as a publisher, its price point double from where it was originally planned, a movie being made, and a whole lot of controversy surrounding its classification in Australia. The road to release has certainly been colourful. But where does it leave the product now that it is available in its final form?

We Happy Few walks the line between narrative adventure and survival. Cutscenes, memories, and scripted narrative segments of gameplay interrupt the standard survival loop of hide, craft, and keep your status effects in check. What’s so interesting about this dichotomy between survival and narrative is how they came to be melded together within the game. It was the gamers really who wanted We Happy Few to be one thing (A Bioshock-esque narrative experience) when in reality it was another thing all together (a survival game set in a fictional dystopian society). Hearing the cries from gamers around the world, Compulsion Games put We Happy Few on a new track, and during its Early Access phase shifted the game in a more narrative focused direction, sacrificing survival elements as they went.

It’s not difficult to see why gamers wanted We Happy Few to be a narrative game so desperately either. The game painted a picture of a dystopian society who are jacked up on happy pills and incapable of seeing the world for the horrific place it actually is. Those who go off their pills (downers) are shafted from society and attacked. It’s an interesting premise and a fun theme to explore.

Where the game falters narratively is in its inability to decide whether it wants to be a serious, emotional game or whether it wants to be a silly, lighthearted piece of entertainment. The game will flip between the two, opening up to the player as something more serious and then slowly shifting tone over time. It’s very hard to care about your missing colleague and a controlling society forcing everybody to conform when you’re also meeting wackadoo characters who find themselves in hilarious predicaments.

We Happy Few just feels like it doesn’t know what it wants to be, or it shifted from one thing to another without fully committing to the change. Whether it’s the gameplay systems in place or the tonality of the narrative, nothing is consistent. The high points of the game actually come from the more comical and scripted segments of play. If Compulsion Games had wholeheartedly focused on this realm we could be seeing a very well received product. Unfortunately the product we’re getting is convoluted and unsure of its own identity. 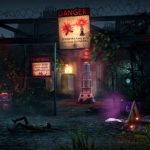 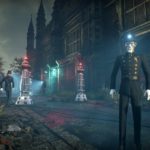 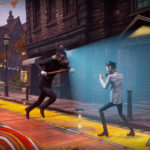 The real problem with We Happy Few comes from its survival elements. A good survival game empowers your exploration, gives you goals to work towards to make your journey easier, and rewards you with big pay-offs and the feeling of accomplishment. We Happy Few doesn’t do this. It takes the worst elements of survival and uses them to burden the player. Whether it’s hunger and thirst meters that constantly need refilling or whether it’s the unbelievably frustrating ‘Joy’ system. The game’s survival mechanics range from a slight annoyance up to actively preventing me from engaging in the game’s narrative and quest progression.

Enemy AI is truly terrible as well. The various NPCs who fill the world certainly embody the ‘artificial’ element of the artificial intelligence acronym better than the ‘intelligence’ element. Starting the game I respected the survival and stealth segments and even respected the enemies I came across, attempting to approach each situation in the most practical and tactical way possible. But as soon as you get a good glimpse of the systems in place you realise how surface level they really are. A large group of enemies, search lights, and alarm systems can be snuck past if you’re really sly and are willing to reload the game 10 times. Or you can just skip that entire gameplay section by sprinting past your enemies, setting off all alarms, and rushing to your objective. Hell you could probably walk past all of your enemies, they are that incompetent and inconsistent when it comes to combat.

“It made We Happy Few feel like a novel where each chapter was written by a different author.”

It’s once you arrive in Madinholm where the game changes things up. It’s at this point the game fully embraces its wacky nature and focuses more strongly on narrative. You’re introduced to more characters, have far more quests to interact with, and can stumble across more of the tightly scripted gameplay segments that are the best part about this game. In fact, Madinholm just looks prettier too. It’s almost like the developers learned from the earlier parts of the game and managed to create an area with more competency than the previous. It was a lovely surprise but also an irregularity in the game’s consistency. It made We Happy Few feel like a novel where each chapter was written by a different author.

Whilst Madinholm stands out positively in so many ways, it also introduces the most frustrating system in the entire game – Joy. You’re required to take your Joy pills so that you can blend in with society. Unfortunately the effects of the pill wear off unusually quickly, so you’ll have to find a Joy Dispensary to take more. Don’t take your pill quick enough? You’ll go through withdrawal and the people around you will get aggressive and kill you for being a ‘Downer’. Manage to escape the angry mob and find a Joy Dispensary? Too bad, these people already hate you and will continue to hunt you down. Take too much Joy and you overdose, which puts a great burden on your gameplay experience. The whole thing is just so cumbersome and tiring.

It’s unfortunate. We Happy Few shines in certain areas. It has so much colour and personality and vivacity that you want to love it. But everything good about the game is so surface level. Once you start digging, the game’s systems unravel and you quickly realise that the shiny exterior was a smiling white mask hiding an empty and vapid core.

We Happy Few feels like it wants to be a narrative game except it will constantly throw roadblocks at you which stop you from experiencing that narrative unencumbered. The game went through some directional shifts during development and those shifts resulted in a lack of focus in the end product. It’s those pesky survival elements and an overall lack of polish that ruin any of the more colourful, engaging or humorous narrative beats found within the game. Enter at your own risk. We Happy Few may have been a long time in development, but it still feels like it has a long way to go.