Forza Horizon 4 Review – A gorgeous racer for all seasons

If Forza Motorsport is for super serious racing fans, then Forza Horizon is the lively younger sibling that is for those more interested in going on a big adventure. In fact, going on an adventure is exactly what loading up Forza Horizon 4 feels like; driving full pace to the iconic Horizon festival to compete with the best drivers in the world in a variety of vehicles and styles across Britain is instantly just as exciting and adrenaline-pumping as its predecessors. Across all seasons, this gorgeous open world racer truly is the best in class.

A strong sequel in every sense, Forza Horizon 4 moves from Australia in its third iteration to the United Kingdom, and while I don’t have the same personal attachment of course, it makes for a large map to explore with old castles and architecture mixed with deep forestry, winding roads and stone fences. It’s not as distinct with personality as I remember Australia being while exploring, but there are quintessentially British locations for sure that carve its own strong identity the more you explore.

It’s important to note how Horizon has really progressed over the years into its own entire beast. Yes, it includes the ability to tweak the performance of vehicles, earn new cars and live out your auto fantasies, but the amount of content available is ridiculous. The Horizon Festival that is the basis for the experience keeps things feeling fresh and fun without trying too hard. Other video games try to be “cool” and “hip” and often induce eye-rolls, but in this case it comes off feeling much more natural (even when you’re trying to gain influence to progress).

There are a variety of “campaigns” in the game that give you a taste of the diversity that’s on offer. Whether it’s performing stunts for a movie, scratching your itch for serious speed in rental cars or taking part in more traditional dirt and street races, you’re never lacking in things to do, and you can take part in as many or as few of these as you like. There are 25 campaigns available and progression is constant no matter what you choose to take part in, providing a steady stream of cars and credits as you complete events. The Showcase events are also back, pitting you against a strong opponent that acts as a boss battle to break up each chapter; they remain as exhilarating as ever.

Weather has been a big focus in the lead-up to release, with seasonal changes proving to be more than just a visual feast for the eyes (although that is honestly a big part of the appeal). Spring is colourful and beautiful with lush fields, blossoming trees and the sunlight bouncing through the trees. Winter makes for hazardous slippery roads requiring more patience as you navigate the tricker courses, but also filled me with awe as I looked to snowy mountains in the distance.

I lost count of the amount of times I took my eyes of the road (I know, living life on the edge right?), just because I was distracted by a beautiful vista, or appreciating the dense streets of Edinburgh, or rollicking through a forest that was only separated by a small stone wall lining the winding roads. Opportunities to visit landmarks highlight this further, even if your avatar does their goofy animation while you’re enjoying the view. The avatars and the way they interact with other human characters does come off looking and feeling a bit soulless, but I’m not here for character animations anyway, I’m here for the car porn, and there’s plenty of it.

The campaign will give you a taste of all seasons before converting to its online state, where the season is a joint experience with all players across the world. At this point, the shared world experience really kicks in, with time of day and weather fully synchronized for you and everyone else playing the game. The season changes weekly, with Seasonal Championships, events and content along with new campaign events.

An ongoing issue with offline open world games is that the content dries up once it’s all been completed, but these additions ensure you’ll have good excuse to keep playing Forza Horizon 4 long after the initial offering… which is huge to begin with. That’s even before we talk about #FORZATHON Live, which includes Daily and Weekly challenges, and online team adventures where you form a convoy with your pals before exploring the map, which is fun on its own. 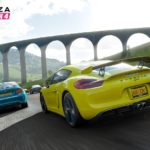 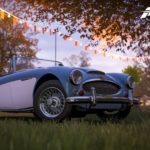 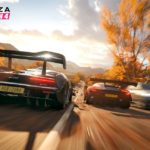 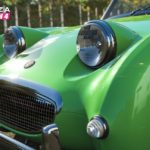 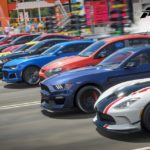 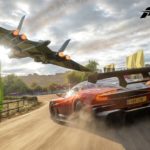 You’ve made it all this way and are probably wondering why I haven’t mentioned the driving part of a racing game, right? Well, that’s because Forza has been completely solid in this regard for a while now, but that doesn’t mean it’s not worth mentioning. Each car feels weighty, and even minor upgrades can make a massive difference when it comes to handling the assortment of vehicles. The four seasons each provide different challenges, but the handling feels completely balanced and realistic. I immensely enjoyed testing out as many vehicles as I could and there are a modest 450+ to choose from, so you’ll be kept real busy if you’re a bit of a collector – and each comes with its own individual perk tree to boot.

Cleverly, if you’re playing on the Xbox One X like I was, you will have an option upon start-up that allows you to choose between the game’s default “Quality” mode in native 4K and HDR at 30 frames per second, or “Performance” mode at 60 frames per second in 1080p and HDR. With PC players, the game will “dynamically optimize the experience” based on their hardware, but I haven’t tested this myself. I chose to take advantage of Performance mode and found the experience to be super slick throughout; with a racing game like this that allows for some really high speeds, running smoother is a priority, but the map looked gorgeous regardless.

There’s still more of Forza Horizon 4 I want to test out once the game officially launches, as it will then be far more populated with actual players and I can see how the shared world experience truly runs day-to-day and whether the ongoing events truly bring me back again and again. But so far, I have very little to complain about. There is a sense that it’s all a bit familiar, I suppose; we’ve come to expect this Motorsport-Horizon year on year off setup for a while now, and argument could be made that these changes (weather and a more organic shared experience) aren’t enough of a step forward – but for true fans of the series or newcomers, it’s hard not to recommend.

Forza Horizon 4 cleverly expands on what was already a strong foundation that has been built over the last several years and refines it further. The integration of a shared world experience is seamless, as is the use of Drivatars and other elements that make the franchise truly special that we perhaps take for granted now. If the only negative I can come up with is that the avatars look kind of goofy and that this isn’t a gigantic leap forward for a loved series, I can’t help but shout from the rooftops that fans and newcomers alike will find a lot to enjoy about this bold, colourful racer. Whatever the weather… when it comes to open world driving games, Forza Horizon 4 is untouchable.