In an interview with TIME in 2015, Stan Lee revealed that his publisher thought his new creation Spider-Man was the “worst idea he’d ever had”. No one liked spiders, teenagers should only be sidekicks, and no one wanted a hero with real world problems. Fast forward 56 years and Spider-Man, one of the most recognisable super heroes ever, returns to gaming in Marvel’s Spider-Man from Insomniac Games — and gosh does this team know how to do our favourite web slinger right.

This isn’t the first time Spider-Man has taken to the gaming world. Ask any fans of the arachnid themed hero and they’ll spin you a tale of the highest highs and the lowest lows in his gaming repertoire. When done right, Spidey imbues the player with a feeling of heroism unrivalled by other protagonists. A mixture of charisma and determination make for a likeable character while his physical prowess and powers make you feel unbelievably strong.

Done wrong however and the friendly neighbourhood Spider-Man can feel clunky and come across as the obnoxious class clown. When Marvel’s Spider-Man was announced a few years ago, a lot of fans began to be concerned. Would it sore high or run out of web fluid and smash into the pavement? Spoiler alert guys, I BLOODY LOVE THIS GAME!

In an extremely intelligent and refreshing move from Insomniac, this take on Spider-Man skips the origin story. Opting instead to focus on the exploits of a hero who has been in the business for 8 years already. A more mature Spidey brings with it a narrative shift from the web slinger most people would be familiar with. No longer in high school, Peter Parker is now dealing with adult problems while also the criminal underworld.

Our story commences as the criminal Kingpin of Manhattan, Wilson Frisk, is finally taken down by Spidey and the NYPD. This is however only the beginning. With the head boss of the criminal syndicates of New York wounded, a new and unknown enemy force crawls out of the cracks to make a powerful play against the city. I won’t spoil anything beyond that, as one of this game’s strongest points are the twists and turns but also the heart behind it. 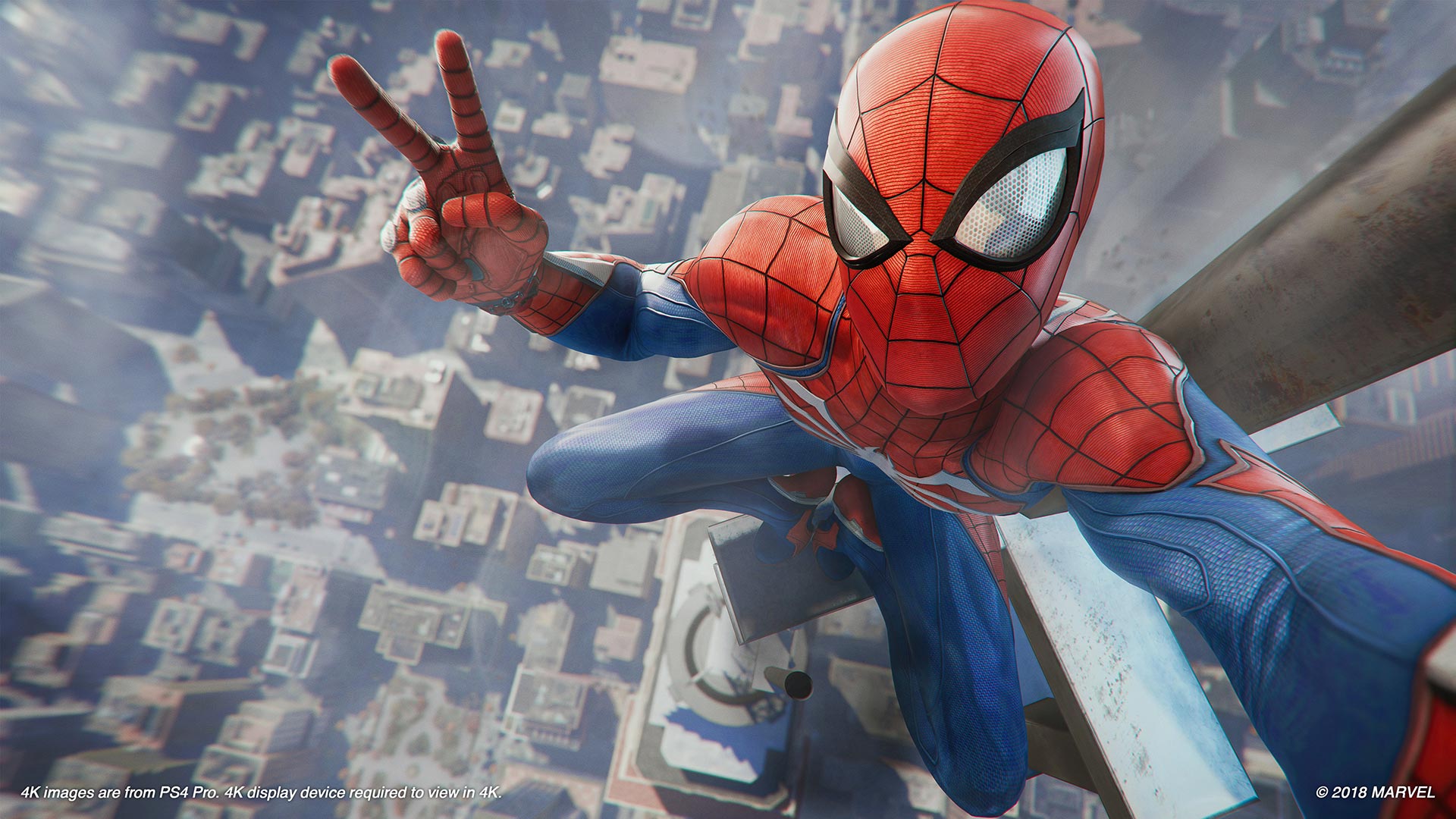 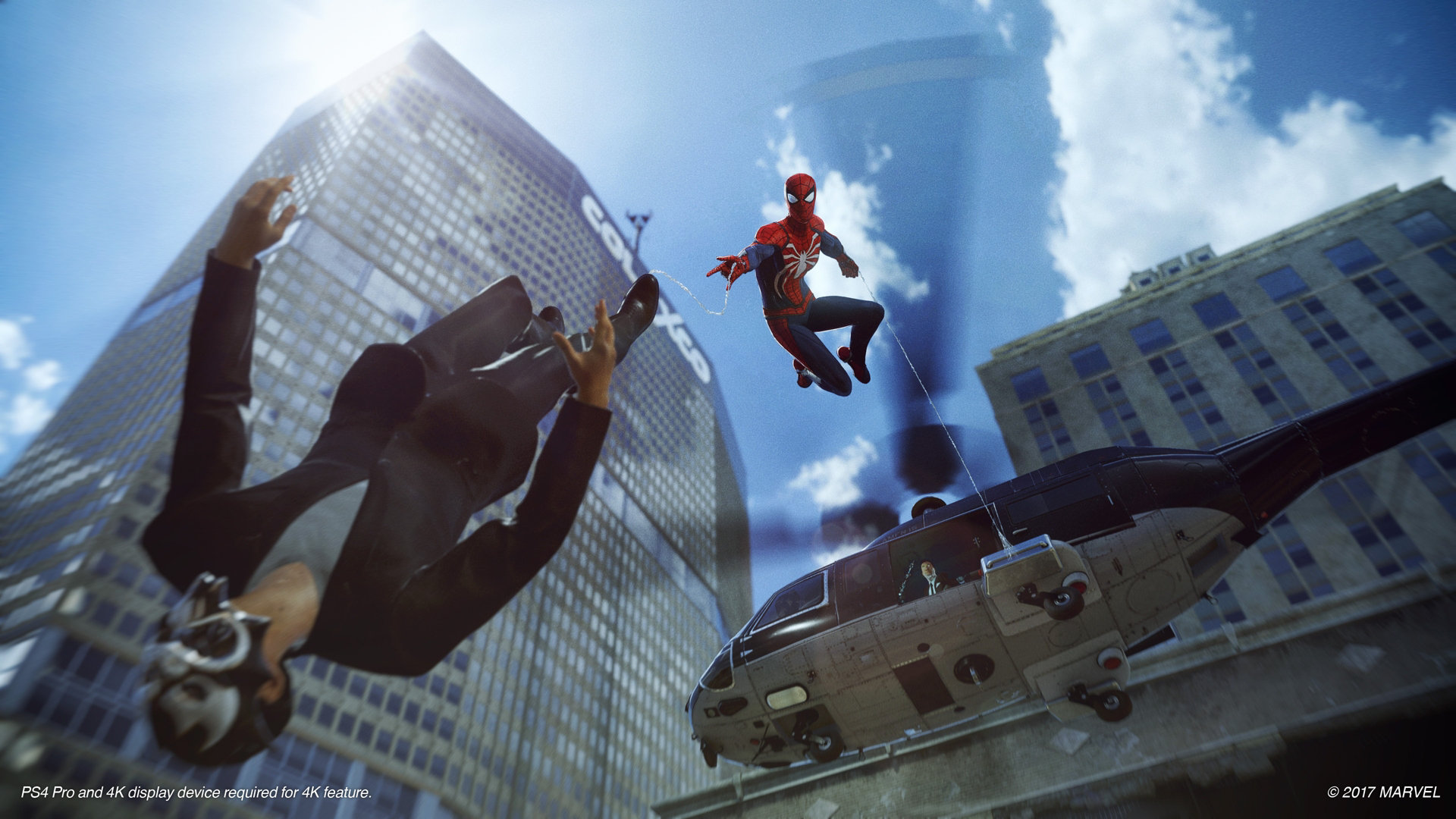 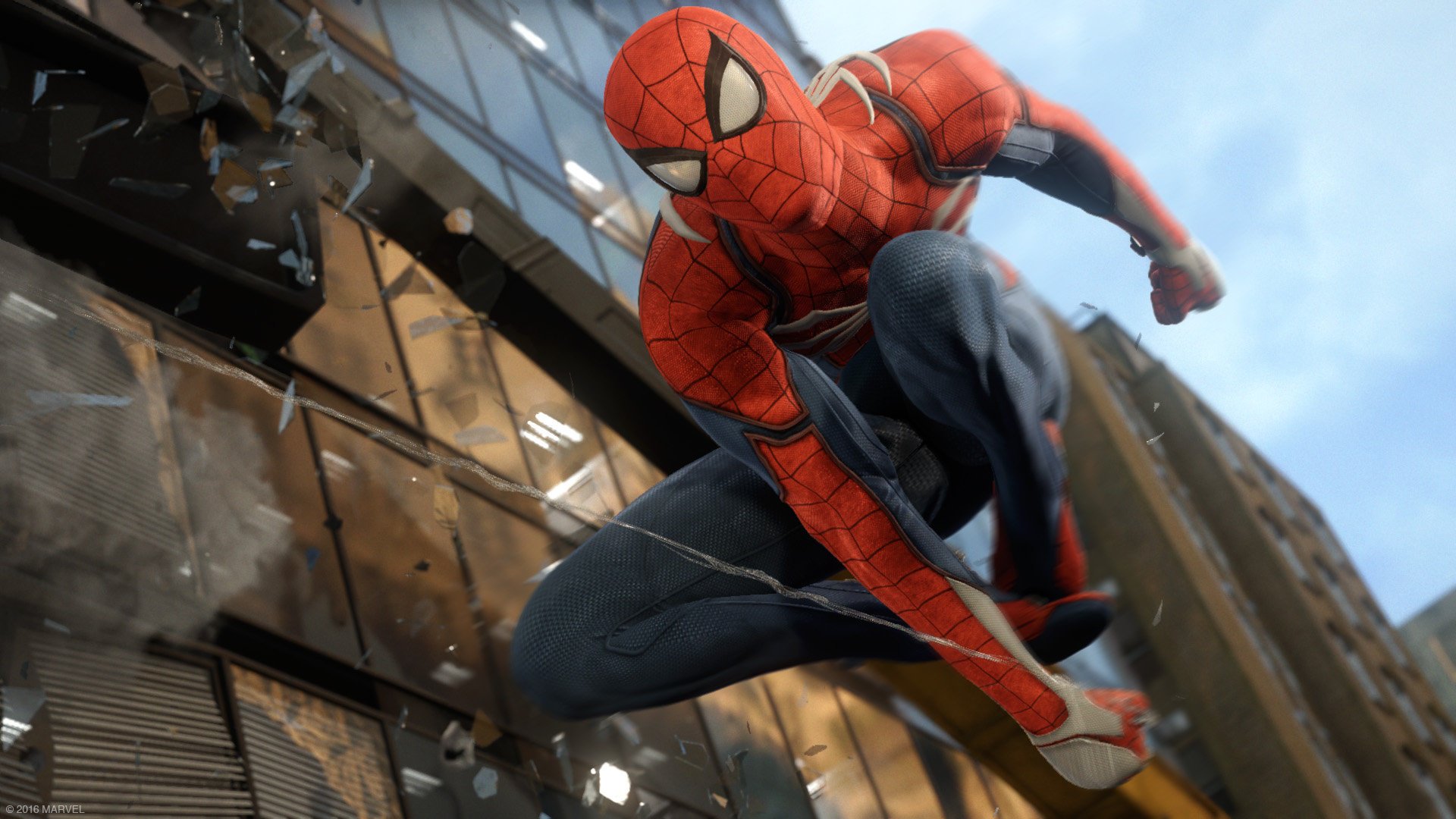 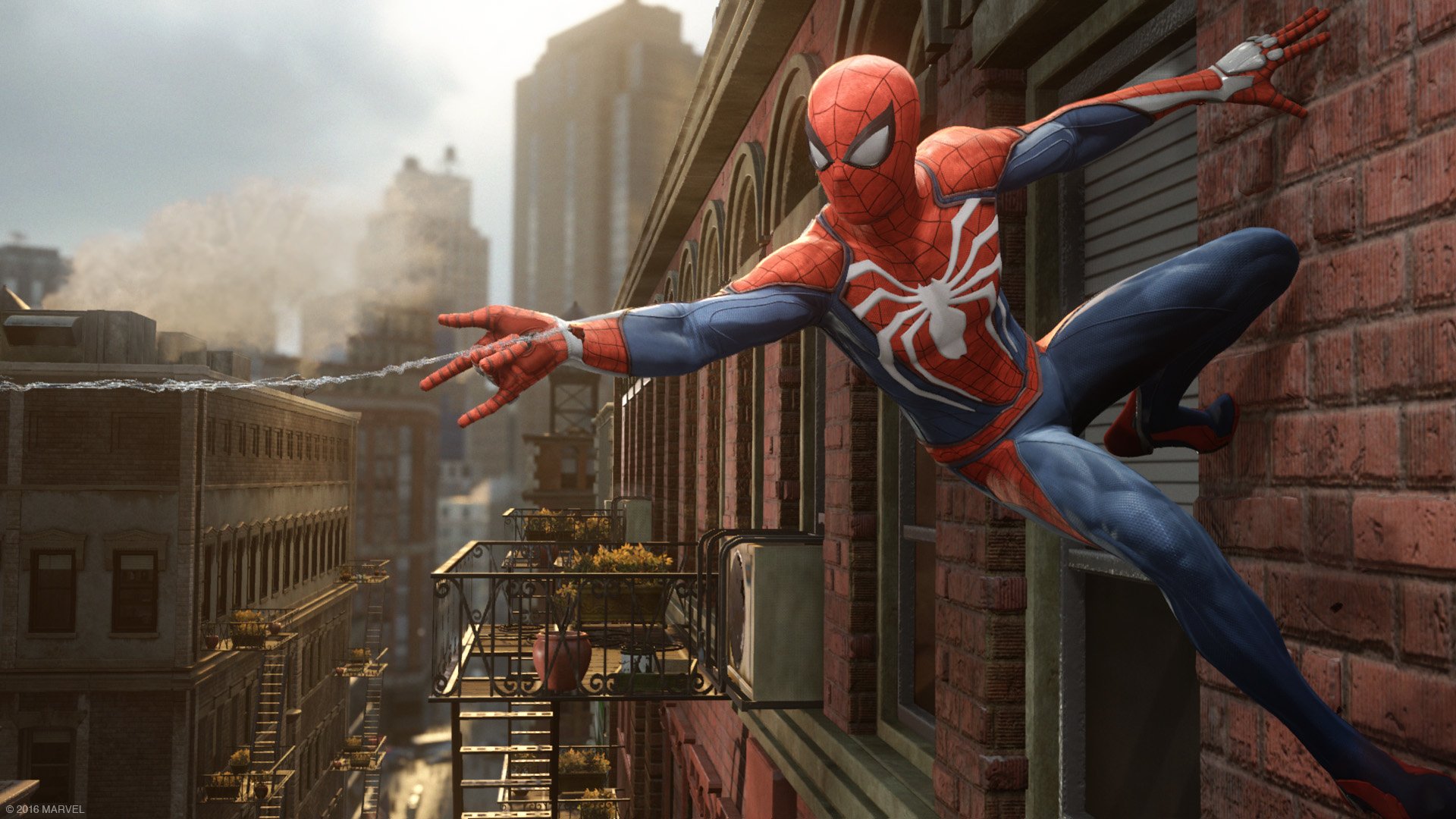 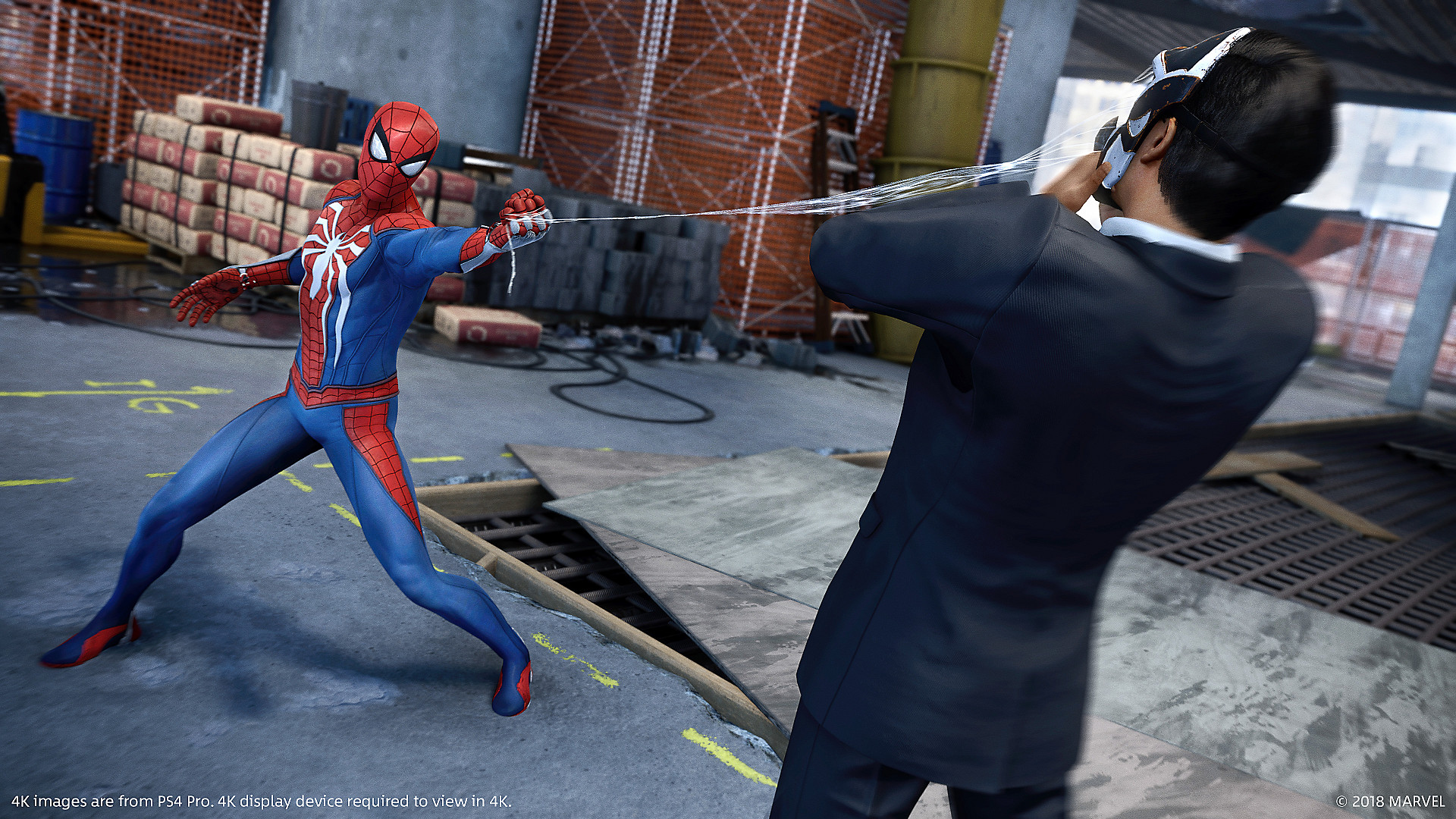 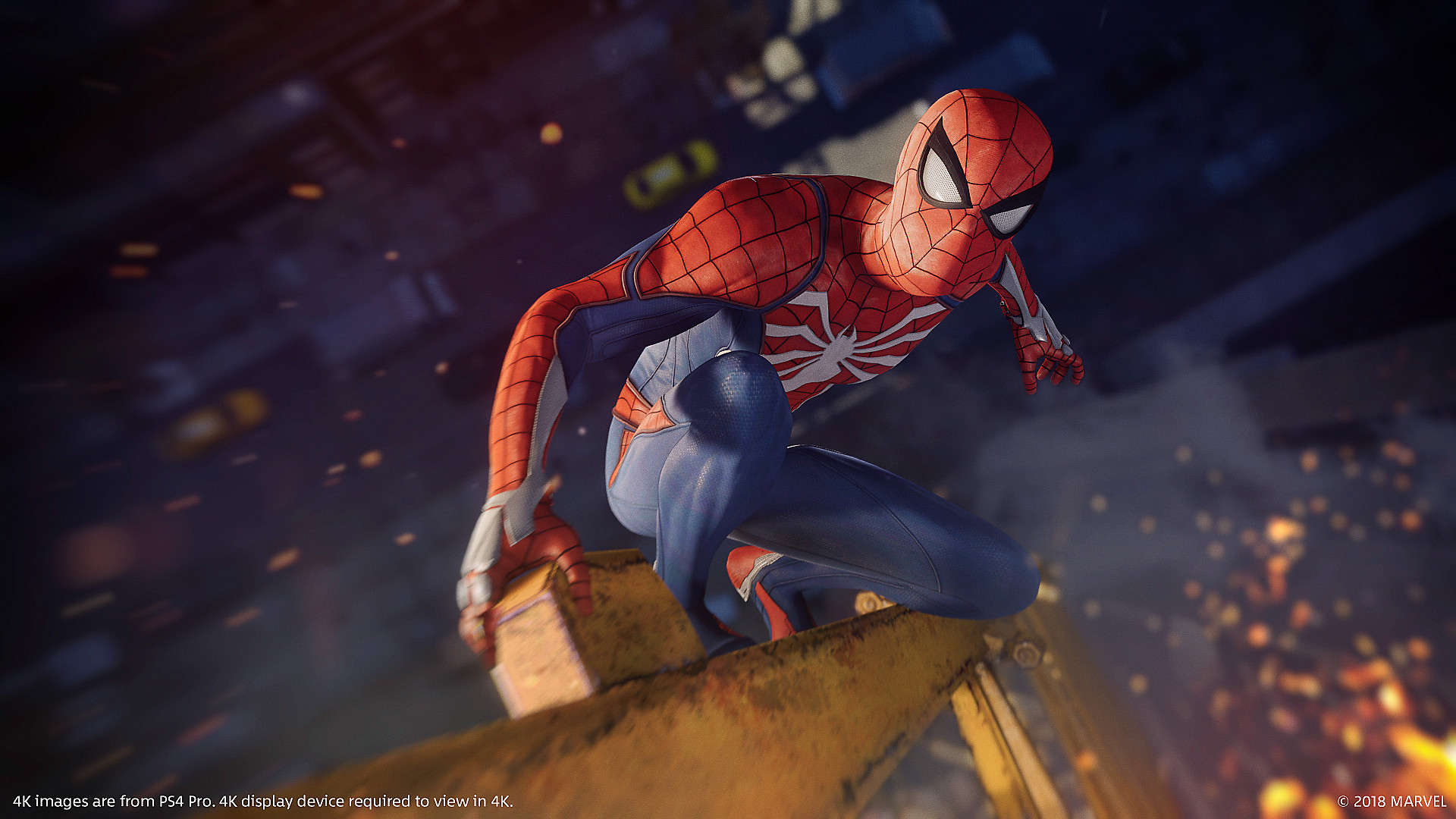 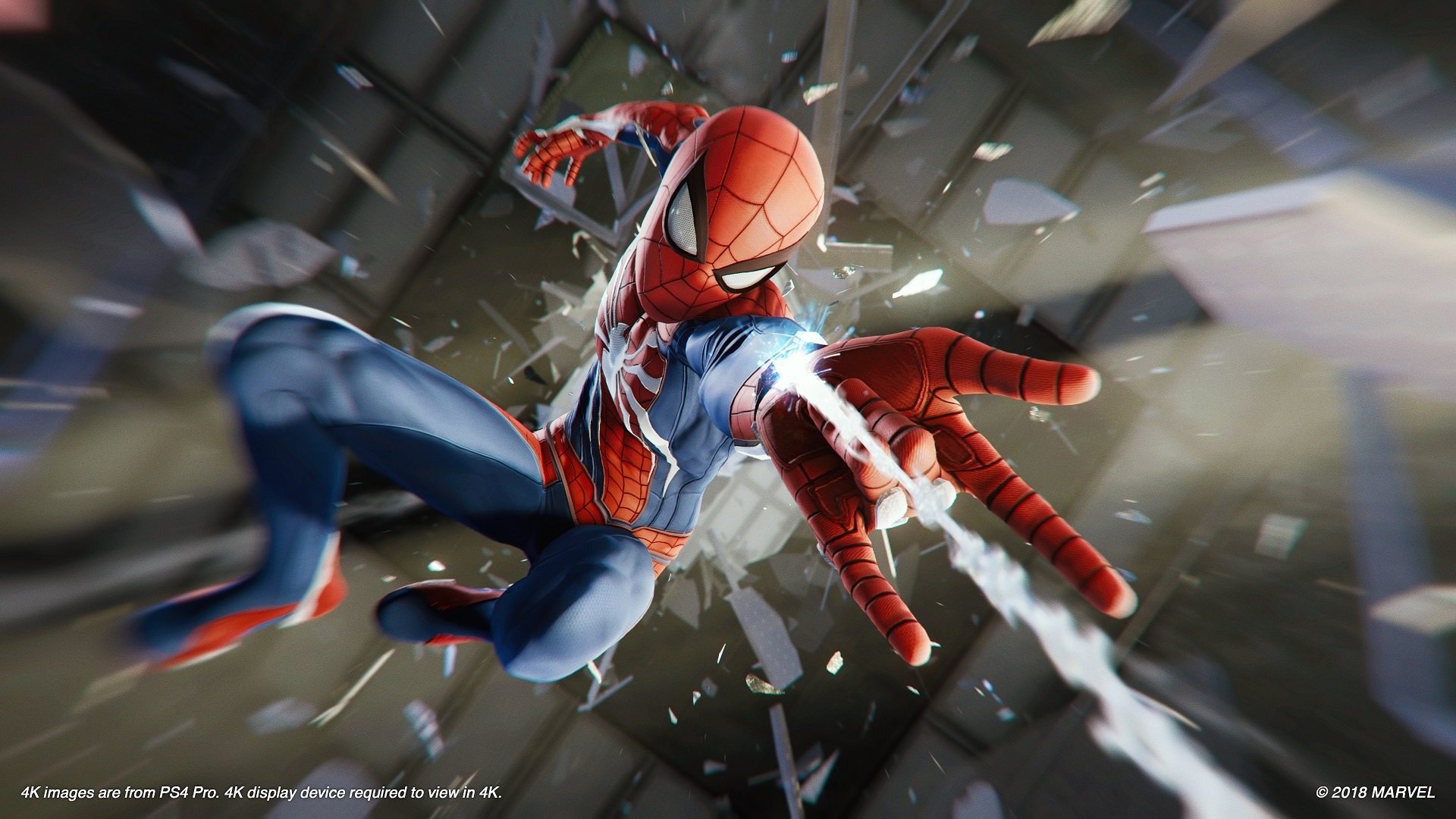 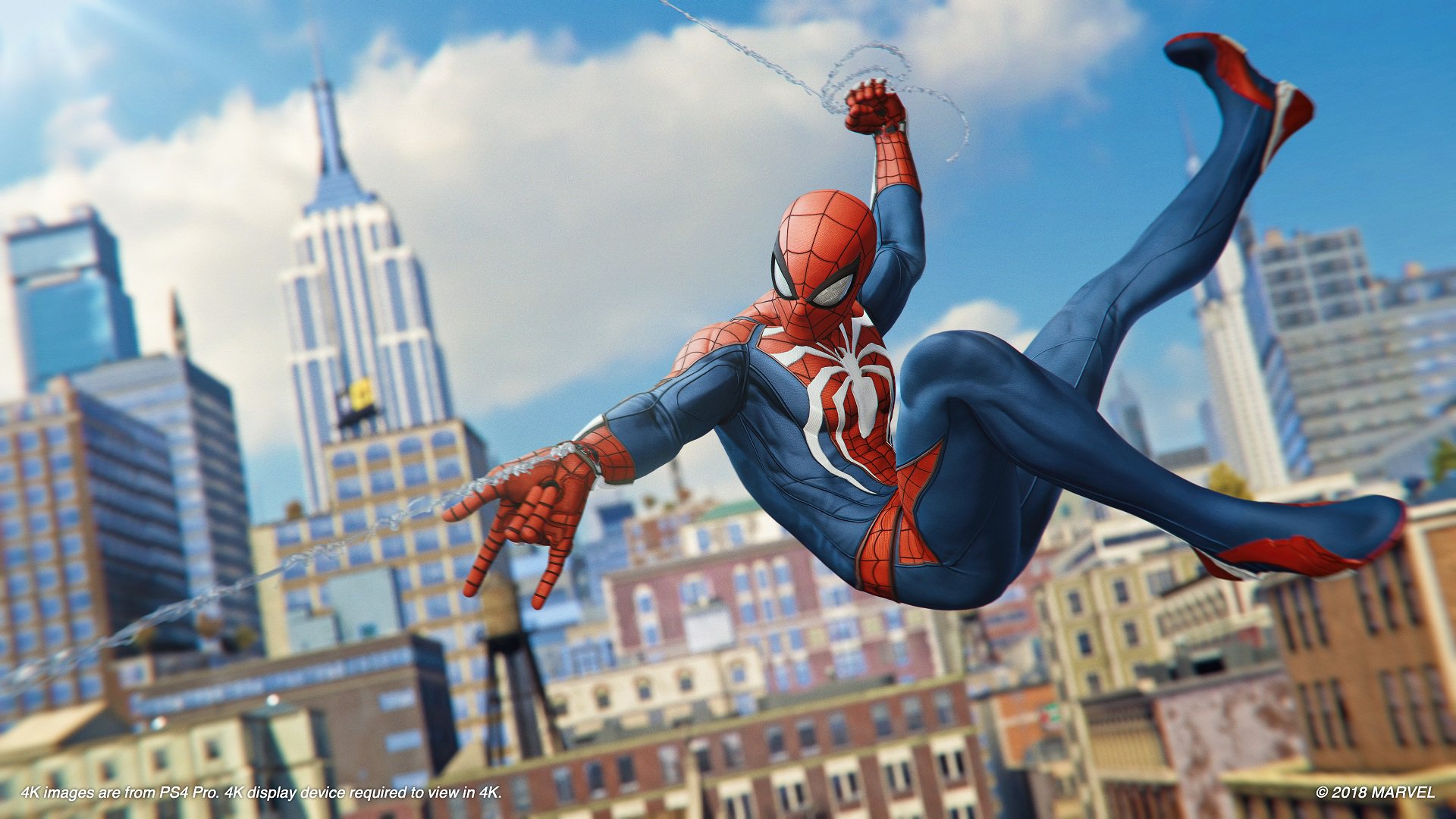 Gameplay will seem familiar, familiar but expertly polished. Spider-Man obviously can’t be contained and lends itself to an open world. You’ll be traversing buildings and unlocking districts, each district will have the usual collectibles and challenges as well as randomly occurring crimes that you will need to foil. Getting around will be key, thankfully from the word “Go!” swinging on your webs around the skyscrapers is easy, unbelievably satisfying and visually stunning.

Combat and enemy encounters lean heavily into this game’s inspiration, the Batman Arkham series. However, while the bones might match when the games are compared, everything on top of that has been changed. Entering an area you’ll have the ability to take a stealthy approach at first, using a mixture of tools and your webbing to pick off enemies while staying out of sight. While this is heaps of fun, that’s not your only approach as you can throw yourself head first into fisticuffs with your enemies.

While Batman is built like a tank and his combat leans into his ability to take a hit and hit back, Spider-Man is instead all about speed. Instead of using counters you’ll be dodging attacks and darting around the battlefield. This matches Spidey perfectly. Taking a hit lowers your health significantly so you’ll need to stay on your toes, timing dodges perfectly and utilising an array of web based gadgets. The tides of combat turning against you? That’s fine, disengage and put some distance between you and your enemy by taking to the sky before swinging back into action with a new approach.

While in the Arkham series I found myself relying on the same moves and gadgets over and over, the frenetic behaviour of combat in Marvel’s Spider-Man lends itself to experimentation. I never find myself doing the same moves over and over and each new skill I learn as I levelled up is utilised on a regular basis.

Along with new moves and new gadgets, you’ll receive a healthy collection of suits to unlock. As you unlock each new suit it will bring with it a new special skill that can turn things in your favour when Spidey is taking a beating. In a wonderful stroke of genius, as you unlock suits the skill that comes with it can be attached to whatever suit you like. This means you can look as spectacular as you like but also use the skill that you enjoy the most. I’ve been using a webbing barrage skill but wearing the Ben Reilly Scarlet Spider suit, because back in the 90’s little Cameron definitely had the hots for that look.

All of this comes together for a slick feeling that sees you effortlessly blend traversal with combat. This combination meant that I lost hours to swinging around the city and dropping into combat. I would actively seek side missions because, unlike some games, there isn’t a fight around every corner. This makes each crime you disperse feel unique even if it repeats itself once or twice, sometimes offering variations you weren’t expecting.

While borrowing from old ideas, the gameplay also throws in the occasional Quick Time Event and again they hit this on the head. The events are used sparingly, are well telegraphed and you’re not sent very far back if you fail one. Unfortunately one downside would be the addition of some “hacking” mini games. The two variations slow down the high speed gameplay and can be jarring. That being said, the mini games themselves are stronger than many out there in the industry. The ideas behind them are simple but thoroughly explored so that they are challenging but quick to resolve—also thankfully not timed at all.

“Spidey is a fantastic hero but he is only as strong as his alter ego, Peter Parker. Without an endearing heart behind the mask it’s all for nothing. Spider-Man has always represented the best parts of heroism. It’s not just about being strong but also compassionate.”

While the gameplay is amazingly fun there is a lot more working in favour of Marvel’s Spider-Man. Spidey is a fantastic hero but he is only as strong as his alter ego, Peter Parker. Without an endearing heart behind the mask it’s all for nothing. Spider-Man has always represented the best parts of heroism. It’s not just about being strong but also compassionate. Thankfully it is the time spent with him both in and out of the suit that helps this, whether it be assisting Dr Octavious with his research or helping Aunt May at a homeless shelter, you see a hero who cares about people, and about the city he protects.

This is achieved through some fantastic voice acting from the cast that makes you genuinely care about these characters and their relationships. Even villains are written in such a way that you feel both threatened by them but also empathetic towards them, something Spider-Man comics have always excelled at.

This channels through to side missions in the game as well. While larger missions are bombastic jaw dropping moments, the side missions will quite often focus on the smaller incidents that Spider-Man treats as just as important. Through the writing and voice acting you believe that he truly believes this small street level crime still deserves his utmost attention.

The reality is that the city you inhabit is a character all of its own and the attention to detail sells a living breathing world. Landing on the street in a lot of open world games would see you staring off into the distance with maybe a handful of people walking around. The streets of Manhattan here are bustling and populated with what I remember being a believable amount of people from my time in New York. Better still, the people react to you, strangers taking photographs, shouting out to you, pointing you towards places of interest or even high fiving you with a little button prompt that rewards you with a small XP boost.

The loving care put in to the city is obvious. Districts feel distinct, Greenwich village sports Rainbow Flags, people jog in Central Park instead of just walking around and so much more. Shop fronts have been designed to never duplicate so that while some may be similar they are unique. All of this before you get into the huge volume of Easter Eggs for Marvel fans. Jump off of Avengers Tower, swing past the Wakanda Embassy or photograph that Sanctum Sanctorum, the city is filled to the brim and is an absolute pleasure to explore. 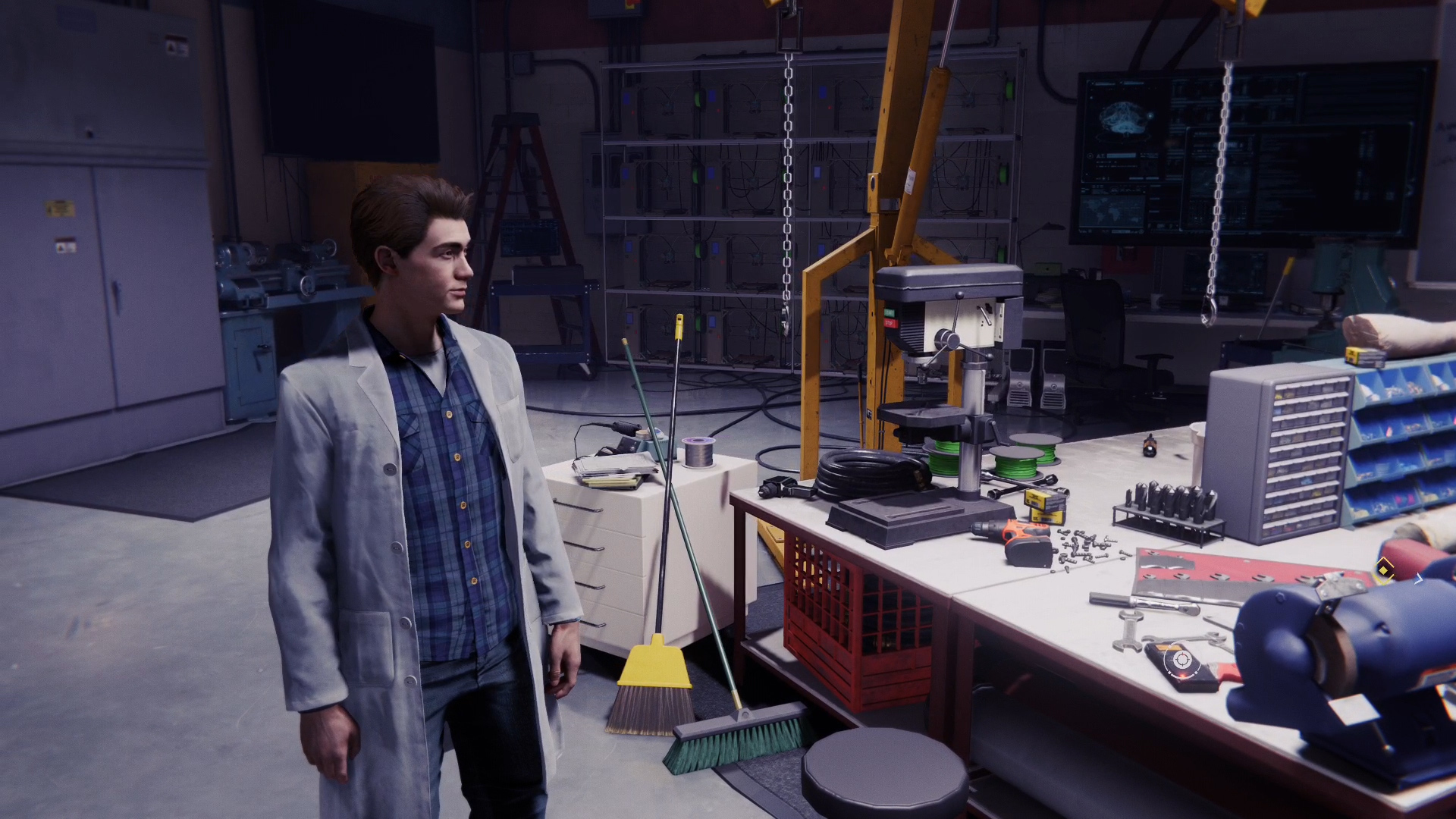 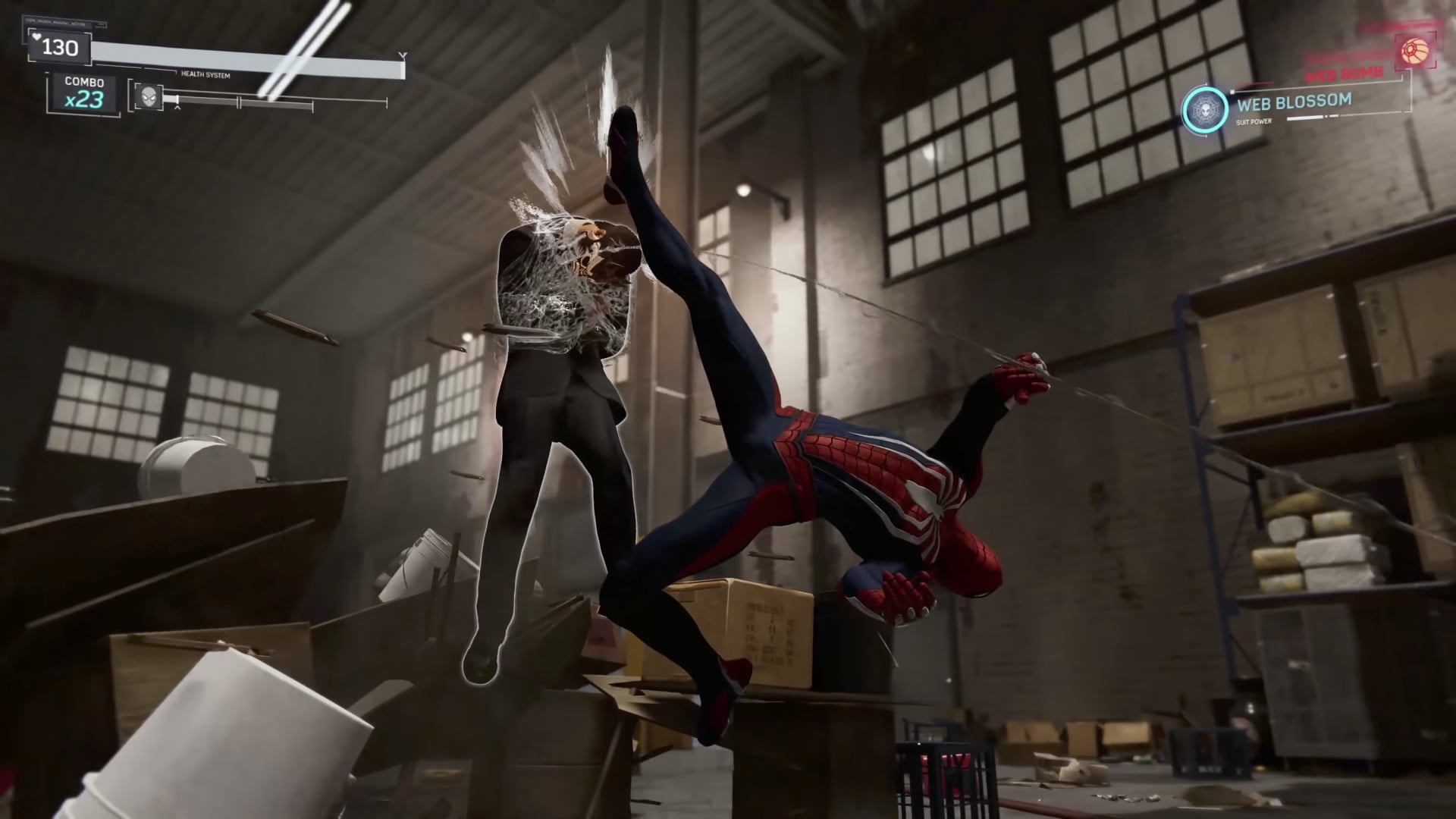 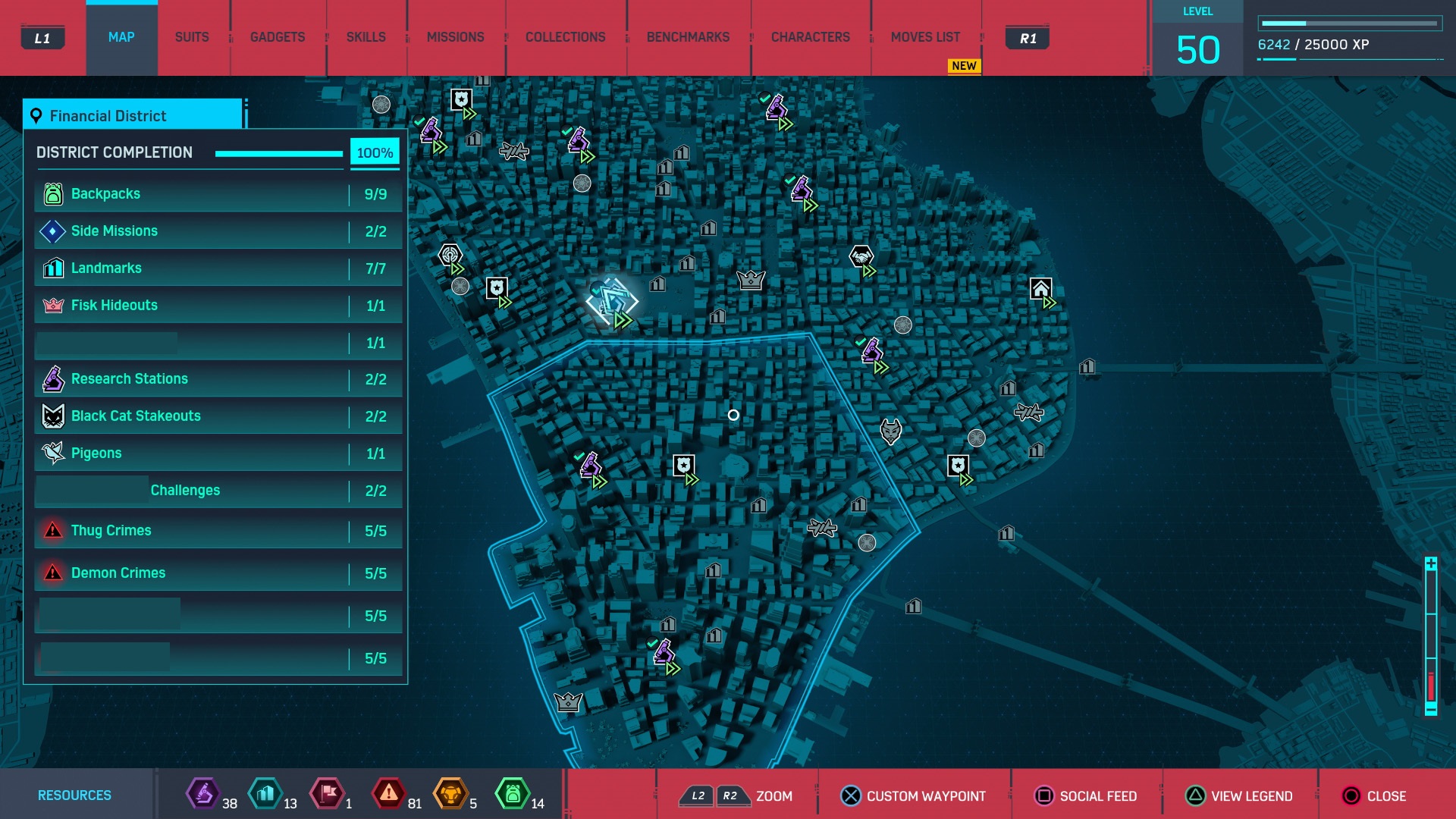 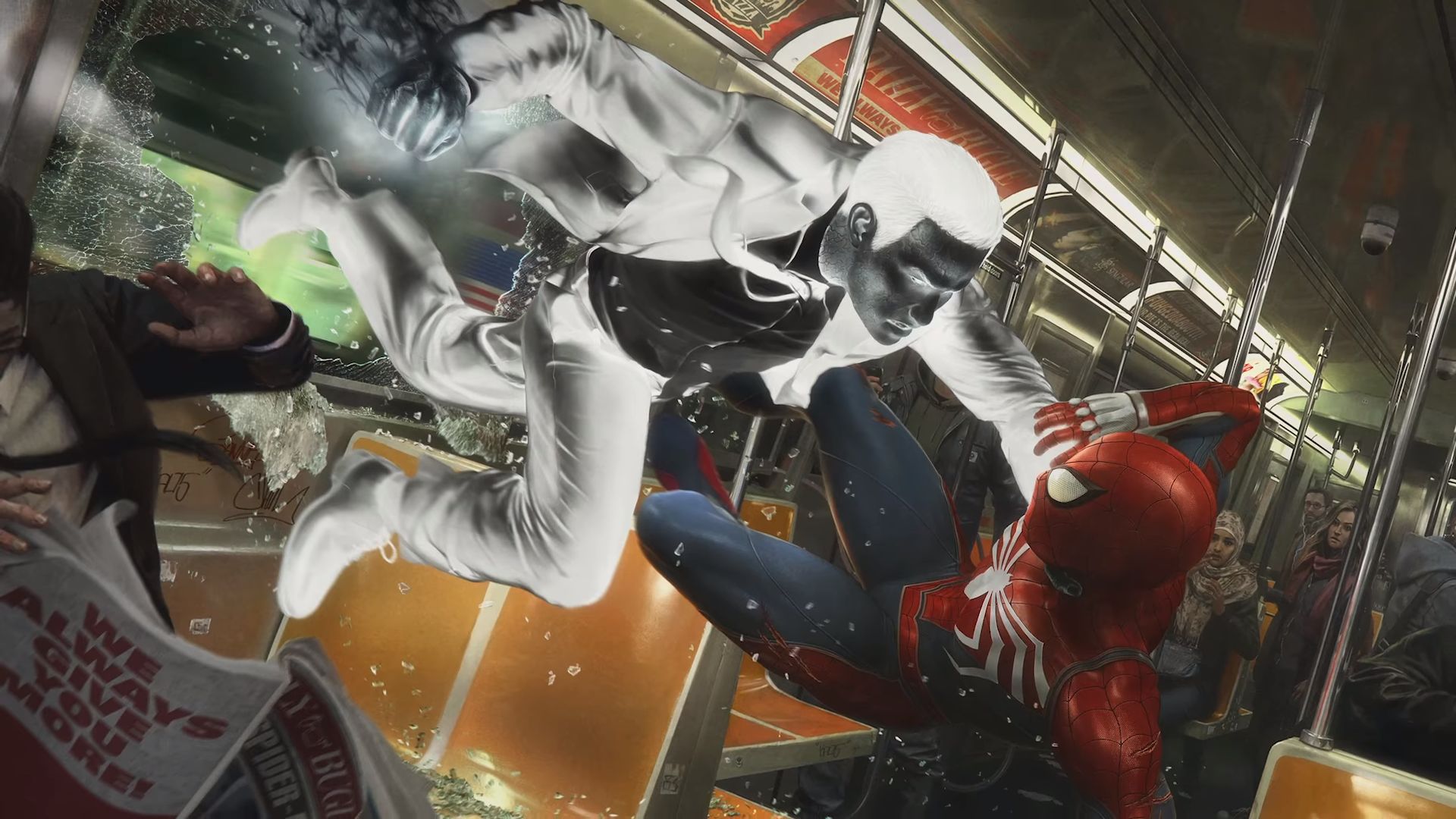 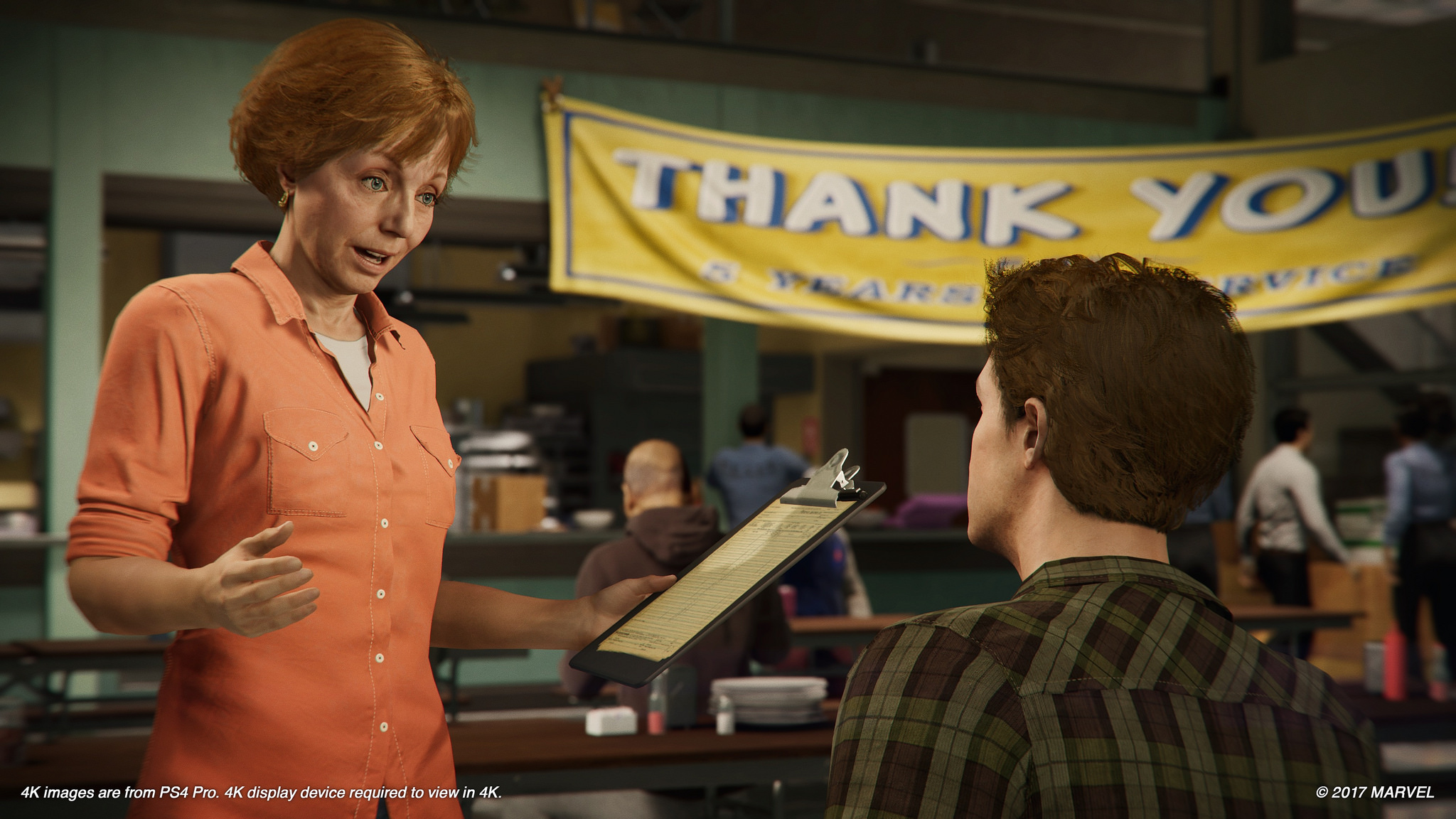 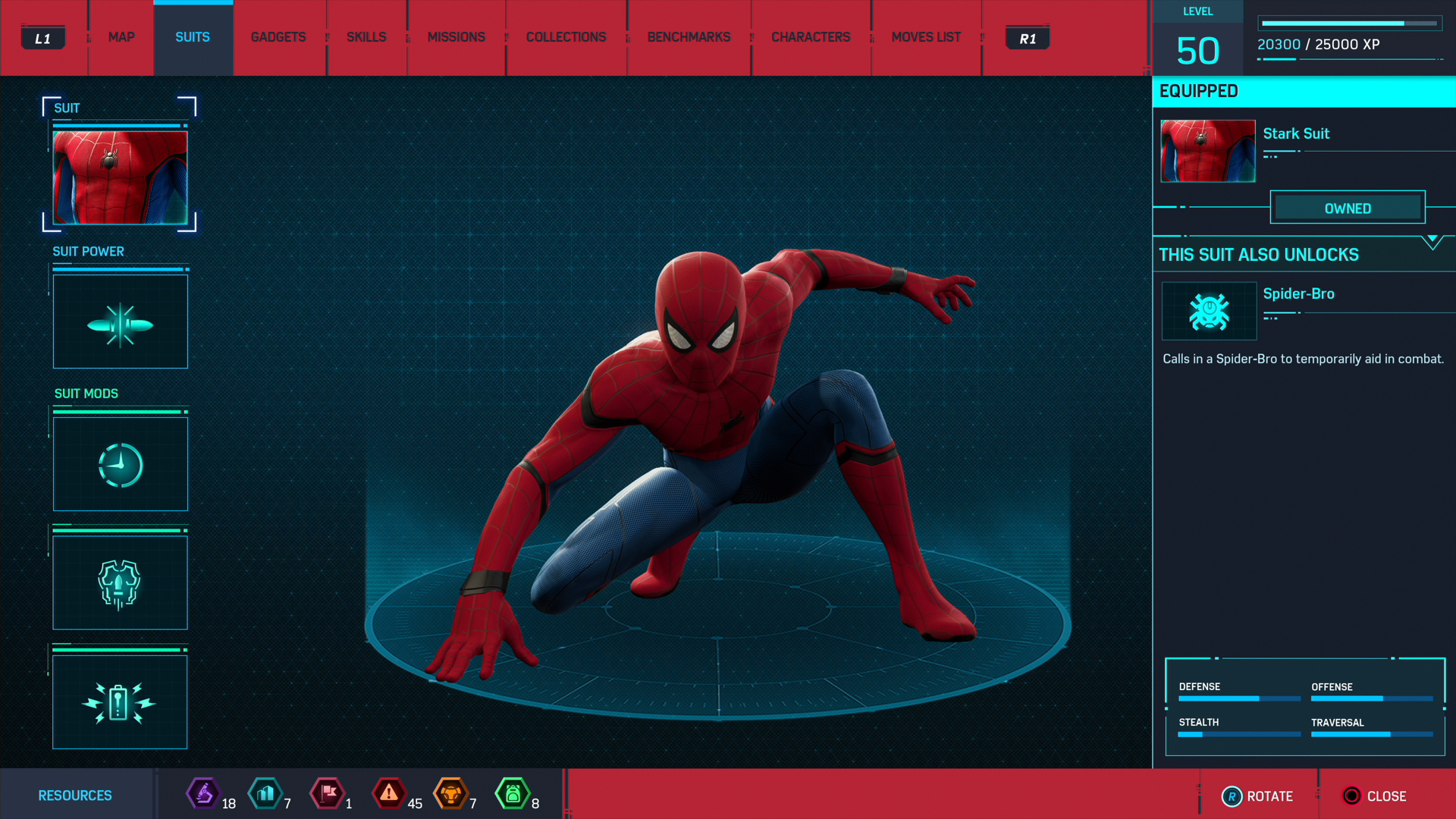 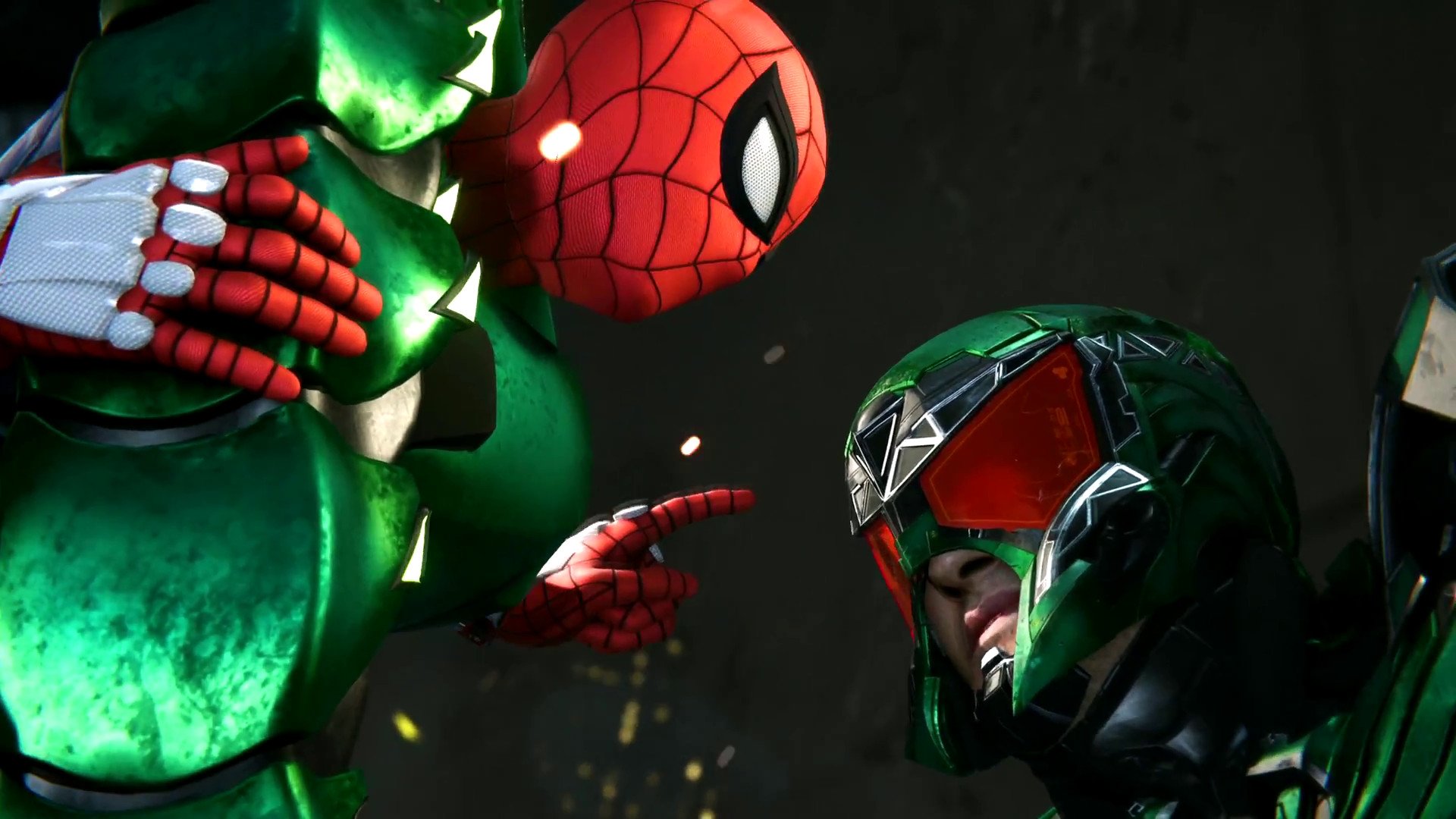 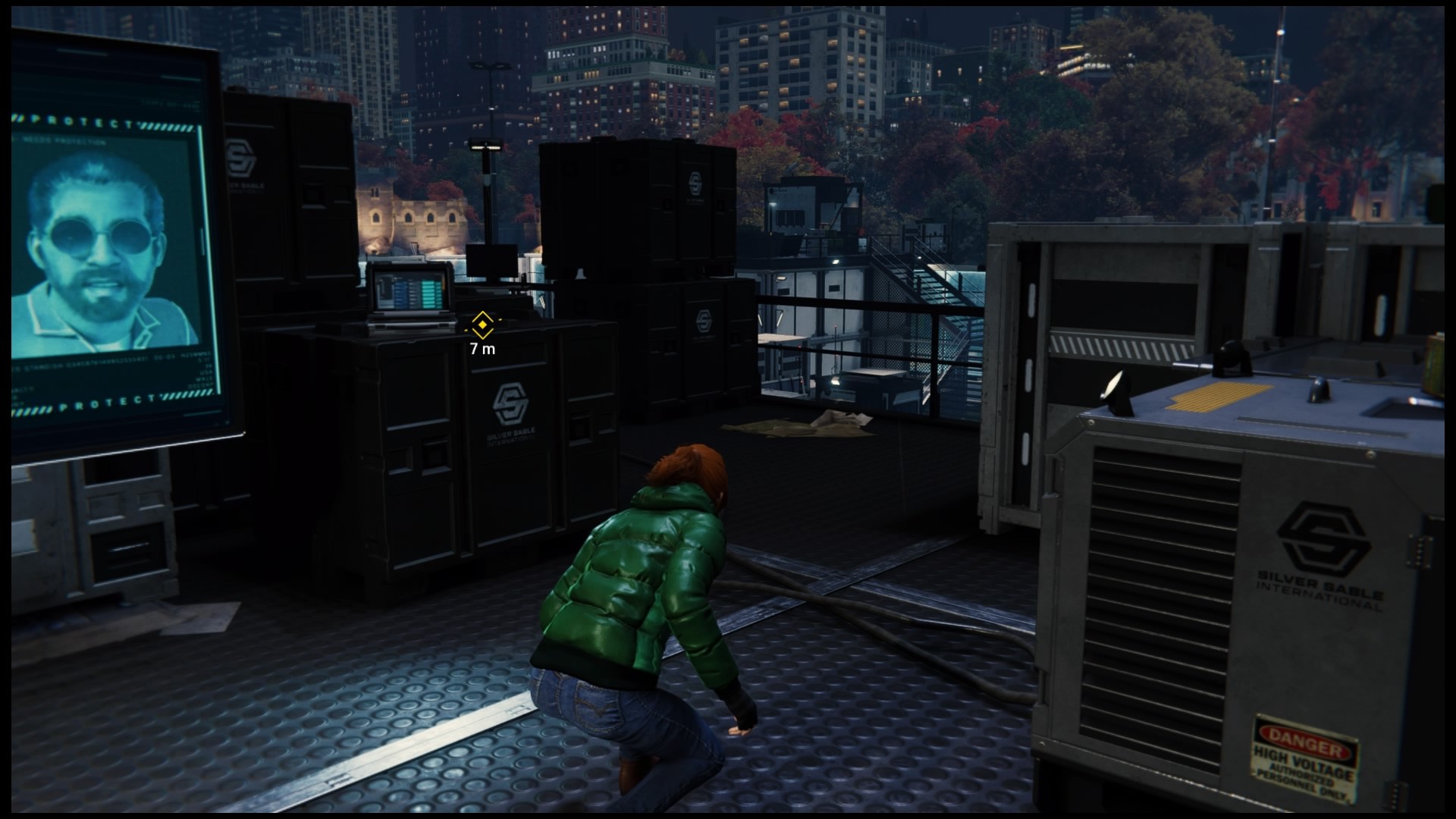 Visually the game is stunning. Whether “Puddle Gate” was right or not, I didn’t notice anything that looked like poor graphics. Character models have nice subtle motion capture to add to the emoting capabilities of cut scenes. This makes interactions with the supporting cast that much more engaging. Swinging around the city, the lighting reflects off buildings as you pass them and at no point did I notice characters just popping in to existence, although to be fair the game distracted me enough that I wasn’t checking for this.

Outside of the “hacking” mini games, probably the only downside I can see would be the slight arbitrary open world activities that every open world game has. Hacking towers to unlock an area to then look for challenges and collectables. Even then though, unlike a lot of games these all have a reason to exist that makes sense and aren’t over used so they don’t really feel like padding. This just again ties in to a team who took the time to polish some of the most annoying mechanics in gaming to show how they should be handled.

There is a reason that Spider-Man has weathered the erosion of time that not all heroes of his era have. Stan Lee spoke of his design saying that they covered him from head to toe because when he is in that suit he can be anyone and he represents ideals that people would want to see in themselves. Insomniac Games have embraced that with Marvel’s Spider-Man. He isn’t just funny and strong, he has heart and so does the storytelling. The writers treat players with respect, they know you know what happened to Uncle Ben and they understand how to use foreshadowing without beating you over the head with it. Yes this game is unbelievably fun, but just like Spidey needs Peter Parker, gameplay needs a narrative, and this game knocks both out of the park. It’s great to see Spider-Man back at the top of his game.