My first experience with SOULCALIBUR was back in the days of the Sega Dreamcast. Developer Namco had a tight relationship with Sony at the time and as a result Tekken was not heading the direction of the Sega Saturn or N64 no matter how badly we wanted them. SOULCALIBUR on the other hand somehow ended up as a Dreamcast exclusive. Finally, a Namco fighting game on a system I owned. It was great, dare I say even better than Sega AM2’s own Virtua Fighter 3. It looked better, played better and it featured Yoshimitsu from Tekken. Despite how much I enjoyed the game, you fast forward and subsequent titles got somewhat lost in the noise of Namco’s flagship fighter, Tekken.

Now, 18 years later, here comes SOULCALIBUR VI, the latest entry in the series. If we are honest fighting games as a genre really haven’t changed that much in the past decade. Graphics are better sure, but ultimately there are only so many buttons on a controller and so many different ways to execute a kick, punch or combo. That said though, I was excited about this one. After so long playing the other big franchises, I realised I had neglected the SOULCALIBUR games. So how did this one turn out? Did it reinvent the wheel or is it more of the same but prettier?

SOULCALIBUR VI starts you off with 22 different characters made up of returning fighters and the requisite newcomers. SOULCALIBUR VI is a weapons based game so there is no hand to hand combat here. All of the characters have their own weapons and special moves. You also have the ability to create your own character if you wish.

Visually, the game is a little less polished than Namco’s flagship Tekken series. Featuring no CG to speak of, the story is told via pastel like scenes and written dialogue (A LOT OF DIALOGUE). But let’s put the bells and whistles aside for now because what we really need to know is what the fighting is like! SOULCALIBUR VI has a gentle learning curve, meaning that newcomers will have just as much fun as experienced players – you can just get into it and play. The control scheme is pretty simple, a couple of strike buttons as well as block, you can also move in and out of the plane.

The characters are well balanced so you can have a competitive match with most combinations. Although there are one or two characters that feel a bit easier to master and are harder to deal with. SOULCALIBUR VI introduces a‘reversal edge’ move which is like paper scissors rock. The fighters step back and the players press a button for their strike. Depending on who pressed what will determine who lays their blow. This can sometimes make the difference between a win or a loss.

The reversal edge is a really cool addition, especially at the end of a competitive fight where a successful strike will win the match or lose it. As far as big moves go, they vary between characters, some have epic specials (one materialises a horse to charge) but others have woefully basic ones which is a let down. Overall though, if you have been stuck into more serious beat em ups, it’s refreshing to get back into button-mashing frantic matches and have no idea how you did that one awesome move. 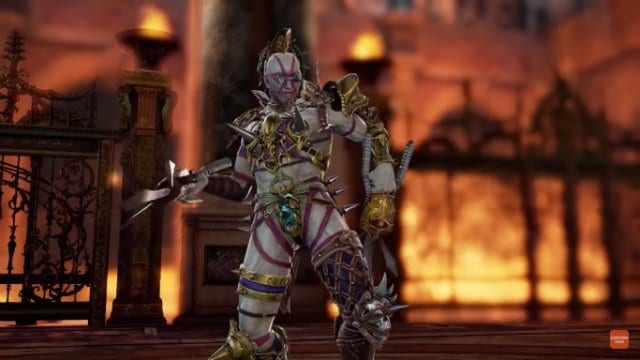 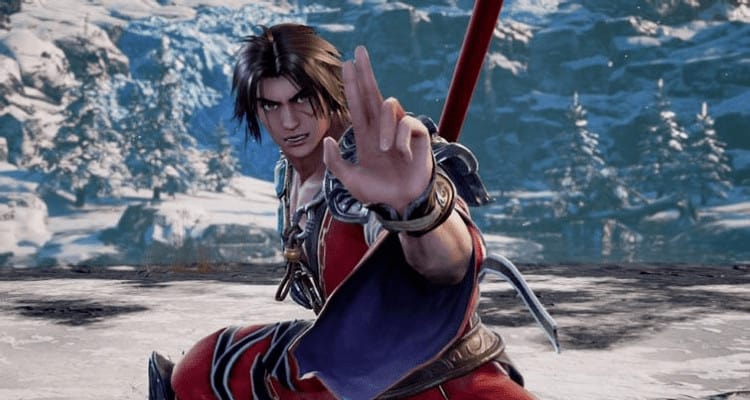 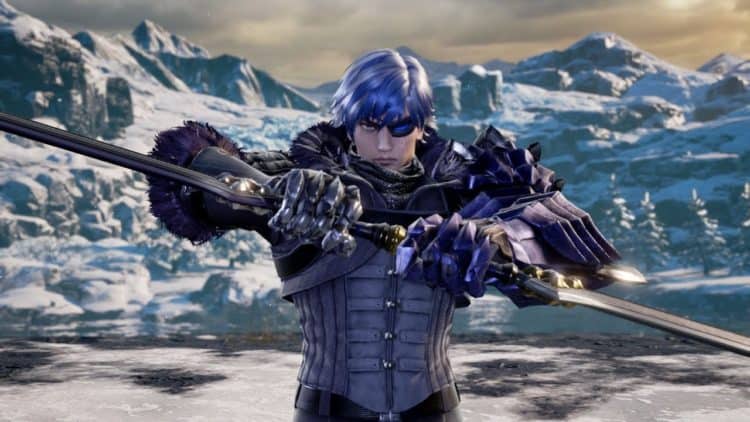 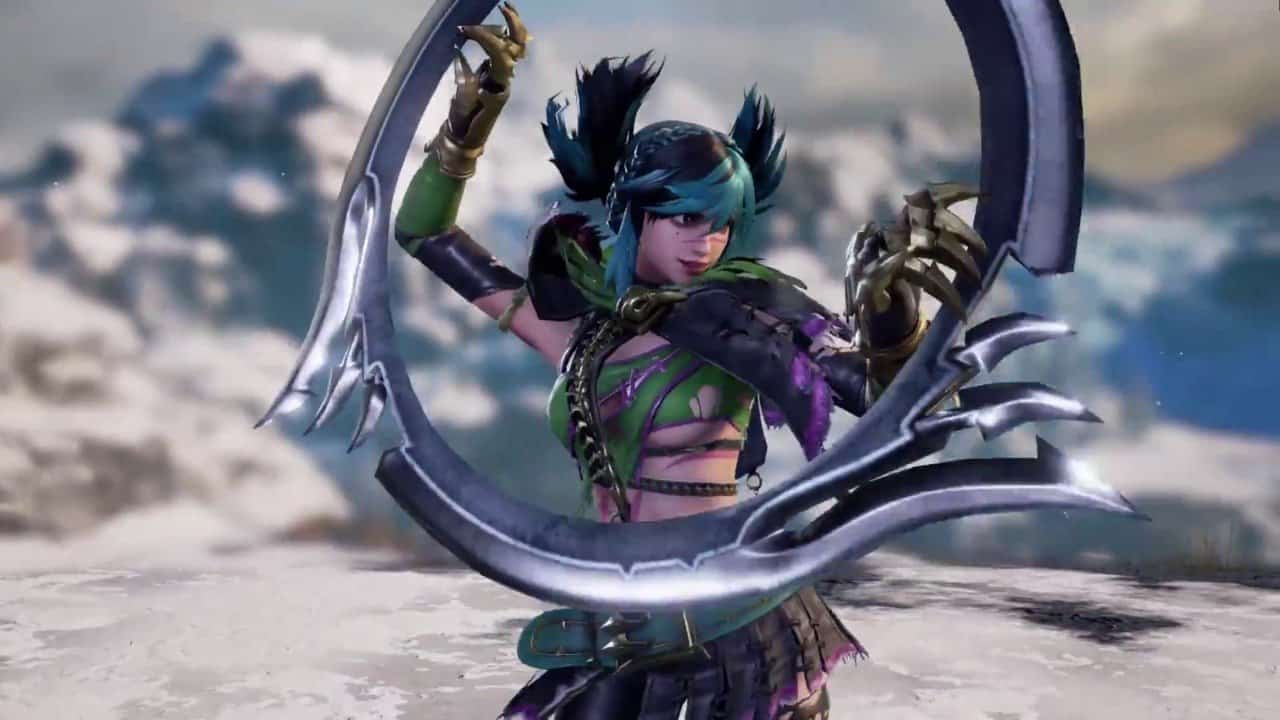 As is common these days, to supplement the main game there is also a story mode. SOULCALIBUR VI’s story mode is rather involved working off a timeline-type spreadsheet that allows you to dive into character’s stories and backgrounds. There is a significant amount of content here with a lot of text followed by a battle. It is worth noting that your enemies here will be palette swaps or random non-main game characters for the most part. The voice acting is pretty bad if I’m honest and quite awkward. The story itself is pretty complex, verging on unintelligible.

Lucky we have the timeline to keep track of everything that is going on. I understand why this is necessary, with fighting games the story mode would traditionally be fighting the characters in order and it’s over within 30mins. So this definitely adds some length to your playing time but ultimately the story scenes followed by a quick match cycle can feel a little disjointed.

That said though, the developers have clearly spent a lot of time creating and elaborating on a very detailed backstory for all of the characters and overarching main story arc. In fact the passion for story also flows through to a fully fledged alternate campaign. There is actually two separate story campaigns, the second features a custom character and the story plays out simultaneously alongside the official campaign. Complete with meeting main characters along your way, fleshing out the gaps in the main story even further.

I was sceptical of this initially, the options for customisation seemed pretty basic and the move set is determined by your choice of weapon. But it didn’t take me long to have a bizarre ‘Adventures of Jojo’ type character. Complete with a kind of smart suit, lots of chains, a top hat and a monocle.

This campaign is even more wordy than the official one, featuring RPG elements such as levelling, item collection and found weaponry and upgrades. Much like the main campaign, the ratio of reading to fighting is pretty heavily skewed. It can get a little frustrating to spend a long time reading followed by a quick one round battle that is over in less than sixty seconds, followed by more words. It really could have done with some side games to break the reading / fighting cycle.

When you put both the main campaign and custom journey together what you get is an extremely detailed and admirable effort to flesh out the game. The way the two campaigns interact, being able to fill in the blanks of the main campaign, is actually really cool despite its flaws from a gameplay flow perspective. I think that fans of the series and the characters are definitely in for a treat as far as the completeness of the campaigns go. But gamers that are just up for some fighting are probably better off just playing the standard arcade mode.

Putting all of the story, the bells and the whistles and the distractions aside, as a beat em up SOULCALIBUR VI is a fine fighting game with fast exciting action. Its learning curve means you can play with friends without worrying about the usually inevitable rage quits. You can play with your flatmates and not worry about how damaged the relationship will be after. Fighting games are about playing with people, just like you did in the arcade. Is it worth buying if you have 50 fighting games already on your shelf? For me, I hadn’t played a SOULCALIBUR game in years because they tend to get lost in the noise of bigger franchises. But playing SOULCALIBUR VI is a blast and if you have someone to play it with, I would say definitely check it out.

Ultimately, I can’t fault SOULCALIBUR as a fighting game. The controls are fluid and responsive. The action is quick, your friends need not fear your skills. The story is insanely detailed which could be considered a drawback if you aren’t a fan, but for anyone interested there is a lot to keep you going.

It’s true, fighting games have not advanced much in twenty years. But SOULCALIBUR VI shows that when executed correctly, they don’t need to. If you have not played SOULCALIBUR before, once you are tired of your current fighter, do yourself a favour and pick this up. Highly recommended, you will not be disappointed.