Over the past couple of years, the Mario Party series sadly hasn’t impressed fans due to some irritating design choices. Super Mario Party has the arduous task of saving the faith and making us excited once more for the series… does it succeed?

You know the drill: Mario and co. are arguing over who the true ‘Super Star’ is. The solution? A Mario Party, of course! Bowser and Bowser Jr join the cast as fully playable characters, as well as DK, Diddy Kong, and an assortment of critters from across the Mario series. The hosts this time are Toad, Toadette, and Kamek, all sporting adorable bow-ties, and they offer a range of games and play modes.

There are a bunch of different play modes to choose from as you walk your chosen character through the plaza that acts as a main menu. But let’s start with the most important one: Party Mode.

I’ll first address the most important factor. Yes, the infamous car is gone. Players are back to roaming the game board separately in that classic Mario Party style, and it’s so good to be back. Though the game boards are a little smaller than I’d like, they are much less linear that in Mario Party 9 or 10, which is a very welcome change. Each board has a distinct and interesting theme, with a few unique events in each one.

There are some anti-frustration measures added, which is nice because you’ll be less likely to want to throttle your friends by the time the bonus stars are awarded. There are less opportunities for players to gang up on each other, or cause utter ruination through the use of game-breaking items. Minigames now reward all players with at least 1 coin, depending on where you placed.

While I praise the reduction of frustrating game-changers, sometimes it felt like the board was a tad empty for the lack of them. Beyond the usual blue and red spaces, you’ve got  lucky, unlucky, and ally spaces, as well as shops. Players can no longer change spaces via orbs or any other kind of item. I would have liked a bit more chance-fuelled wackiness, though I’m sure others will prefer it this way. Each game was still full of twists and turns, and you’ll never quite know who the winner will be until the bonus stars are given.

Allies are a brand new mechanic in Super Mario Party.  They’ll tag along with you as you travel the board, helping out in small but important ways.  Without them, you’ll be at a serious disadvantage – allies add to your roll total, and some minigames will even allow your allies to help you out as AI-controlled CPUs. There’s no limit to the amount of allies you can recruit, so make sure to get yourself an entourage! See if you can get enough to form a conga line behind you. With enough allies, you could traverse half of the game board in one go and absolutely clean house.

Dice and coin mechanics have been tinkered with to keep the game moving quickly, which makes for very well-paced games. In addition to the normal 1-6 dice block, each character has their own customised block, usually that offers  a bit more risk and reward. If you have an ally, you may choose to roll their custom dice instead, giving you way more control over where you land on the board. I love that the staple of this series – simply rolling dice – has been made into a clever strategy this way. You must pay careful attention to your allies’ possible rolls, as well as what they’ll add to your roll total. It may be in your better interest to hope for low! 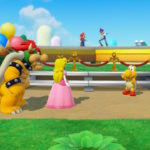 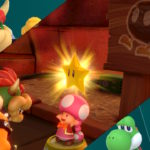 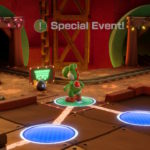 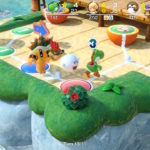 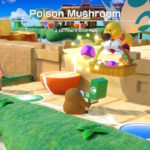 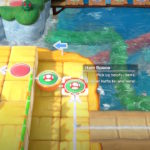 Bonus stars are once again awarded right before the final tally, giving some last-minute hope to those lagging behind. Toad will give out two each game, and the requirement for winning them is a surprise each time.

I can tell this will be a problem for a lot of players, as there’s no option to turn them off or even to change which bonus stars get awarded, or how many. It’s annoying, as the game has otherwise done a great job at eliminating some long-standing and common player frustrations. Other mid-game options I would have liked to see include a save and quit, and a way to adjust the number of turns or which players are CPUs. I’m not quite sure why these options have been excluded, when Mario Party games have featured them in the past.

“… you’ll be less likely to want to throttle your friends by the time the bonus stars are awarded.”

But Party Mode is not the only thing we’re here for! What about the minigames? Well, Super Mario Party doesn’t disappoint here either. There are a good mix of 4-player, 2-vs-2, and 1-vs-3, though sadly no Duel. The AI in CPU characters is much improved – gone are the days of losing a team minigame just because of my CPU partner.  It’s worth noting that I set all CPUs to ‘Hard’ right off the bat, though. 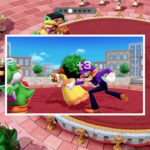 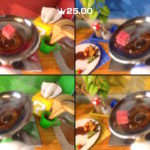 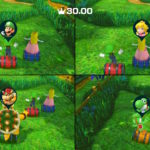 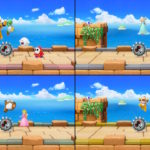 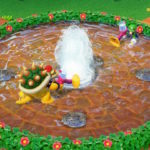 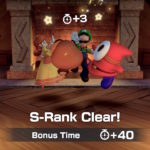 There are barely any minigames that require you to destroy your joycons with button mashing and joystick swivelling. The motion controlled minigames are mostly well done, although the motion detection is still a little vague. Many a minigame was won by simply waving the joycon around like a lunatic, but in a game like Mario Party that just adds to the fun. You’ll be punching each other, racing, scrambling about, and more: almost all of them were a hit with me and my friends.

There are a few other fantastic modes worth quickly running over:

Partner Party Mode is a similar beast to Party Mode, with some key differences. In two teams, you’ll use your combined rolls to try to navigate to the star space. Allies are once again useful, but the real key here is communication with your partner. You’ll need to talk over your moves and think critically if you want to cut your opponents off from the win. If you’re playing with CPs, never fear. The AI is decently clever and will employ enough real strategy to keep you on your toes.

River Survival Mode has you and your friends work together to make your way down a treacherous delta, playing new co-operative minigames.

This is by far best played with humans. No small amount of panicked yelling  pervaded my living room as we tried to avoid obstacles and choose paths. But we also felt accomplished each time we succeeded, and happily raised our joycons in the air to make our characters high-five.

Sound Stage Mode is an energetic competition to see who’s got the best moves (who are we kidding? Nobody will ever beat Waluigi). The pool of rhythm games are small but fun, with the hardest mode a frantic scramble. You’ll use the joycon’s motion controls for these, and the detection works really well while also granting you a little leniency with your movement.

There are a few more fun modes than these, but I won’t spoil anything more for you. Suffice to say, there’s a lot to play with here.

It’s a bit of a bummer that the GUI (that’s Graphical User Interface such as menus, text, and select screens) looks pretty bland compared to previous Mario Party titles. They’re going for a clean and simple style, something I also noticed in Mario Tennis Aces and Mario Odyssey. Here, though, the clean look just makes minigame and event roulettes look plain and boring. The Mario Party titles of old had GUI that was bursting with colours and fanciful effects that made you instantly ready to party, so it’s a shame that something similar doesn’t appear in Super Mario Party.

That being said, the lively character animations are a joy to watch and make up for any GUI shortcomings.  The happenings in the background of both the plaza and challenge road are adorable, and added a lot to my enjoyment.

The multiple game modes are going to keep me and my friends occupied for quite some time to come. I was apprehensive about this one since I hadn’t enjoyed the Mario Party series for the last few years, but it’s my pleasure to give Super Mario Party a glowing stamp of approval.  Its anti-frustration measures ensure a fun time for every player while still featuring enough chance and luck that you’ll spend a good few minutes cussing out the CPU players for pulling off a surprise win. Mario Party is once again king of the multiplayer party genre!