100 years ago, the first World War ended on the 11th of November 1918. It was the bloodiest war ever fought, leaving millions dead or wounded. Some games, like Battlefield 1, have sought to explore a conflict that has seen less focus in games than World War 2.  11-11: Memories Retold, developed by Aardman, seeks to tell a more grounded story about life during the war from the perspective of non-combatants. Appropriately released on the centenary of the conflict’s end, 11-11: Memories Retold conveys a gripping and emotional tale about two men whose lives were changed as a result of the Great War.

The protagonists of 11-11: Memories Retold are Harry and Kurt, who are on opposite sides of the war. Importantly, neither are professional soldiers. Harry is a young Canadian photographer drawn to the front lines to impress his girlfriend. Kurt, on the other hand, is a middle-aged German engineer who has travelled to the trenches to find his missing son.

Although they begin the story on separate paths told in alternating chapters, they eventually meet and must contend with becoming friends on opposite sides of a war.

The voice-acting is generally top-notch, especially the performances of Elijah Wood and Sebastian Koch as Harry and Kurt respectively. Cleverly, the game has all the characters speak in their native languages, emphasising the global nature of the conflict. This also drives a language barrier between the two leads. 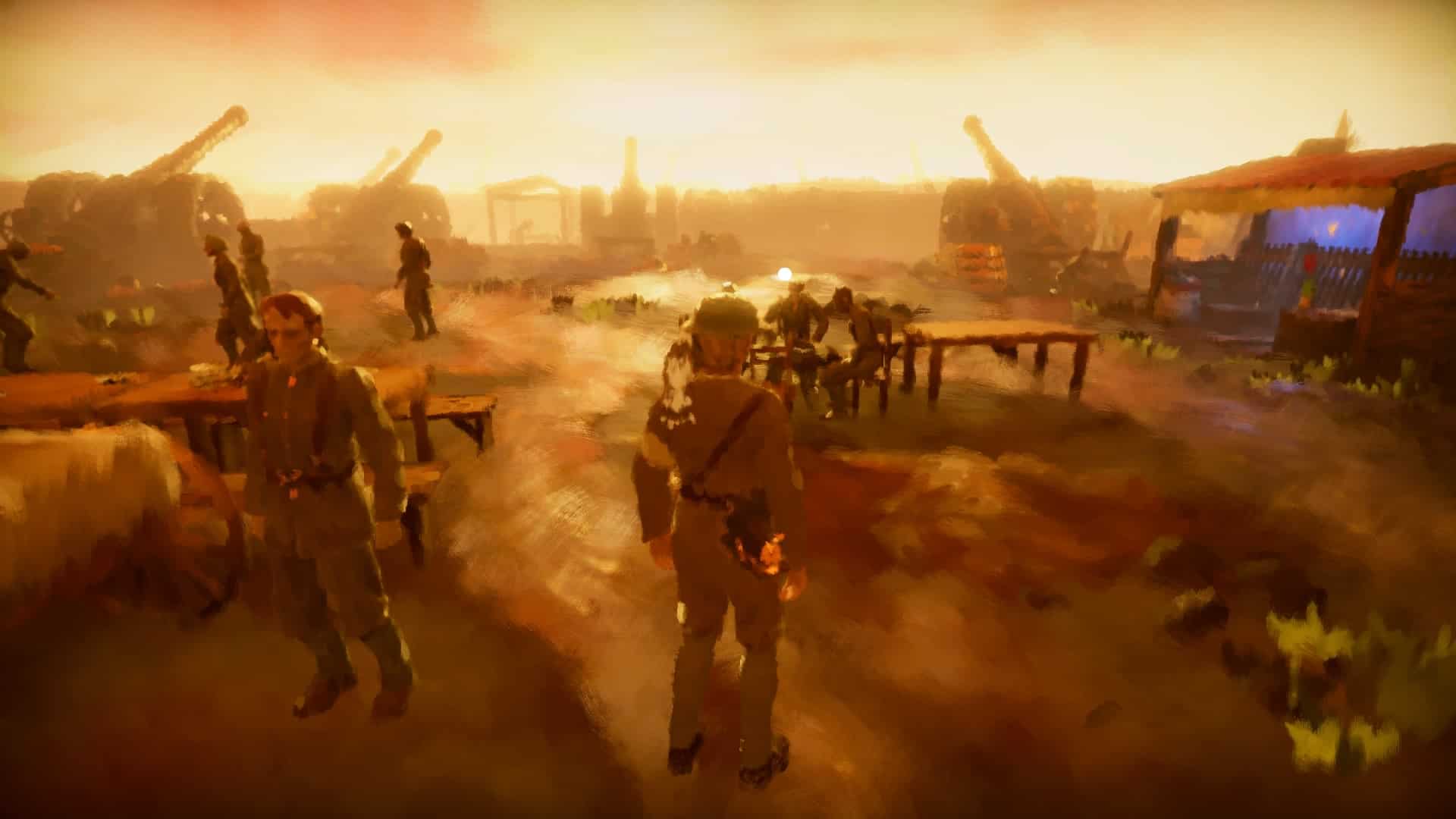 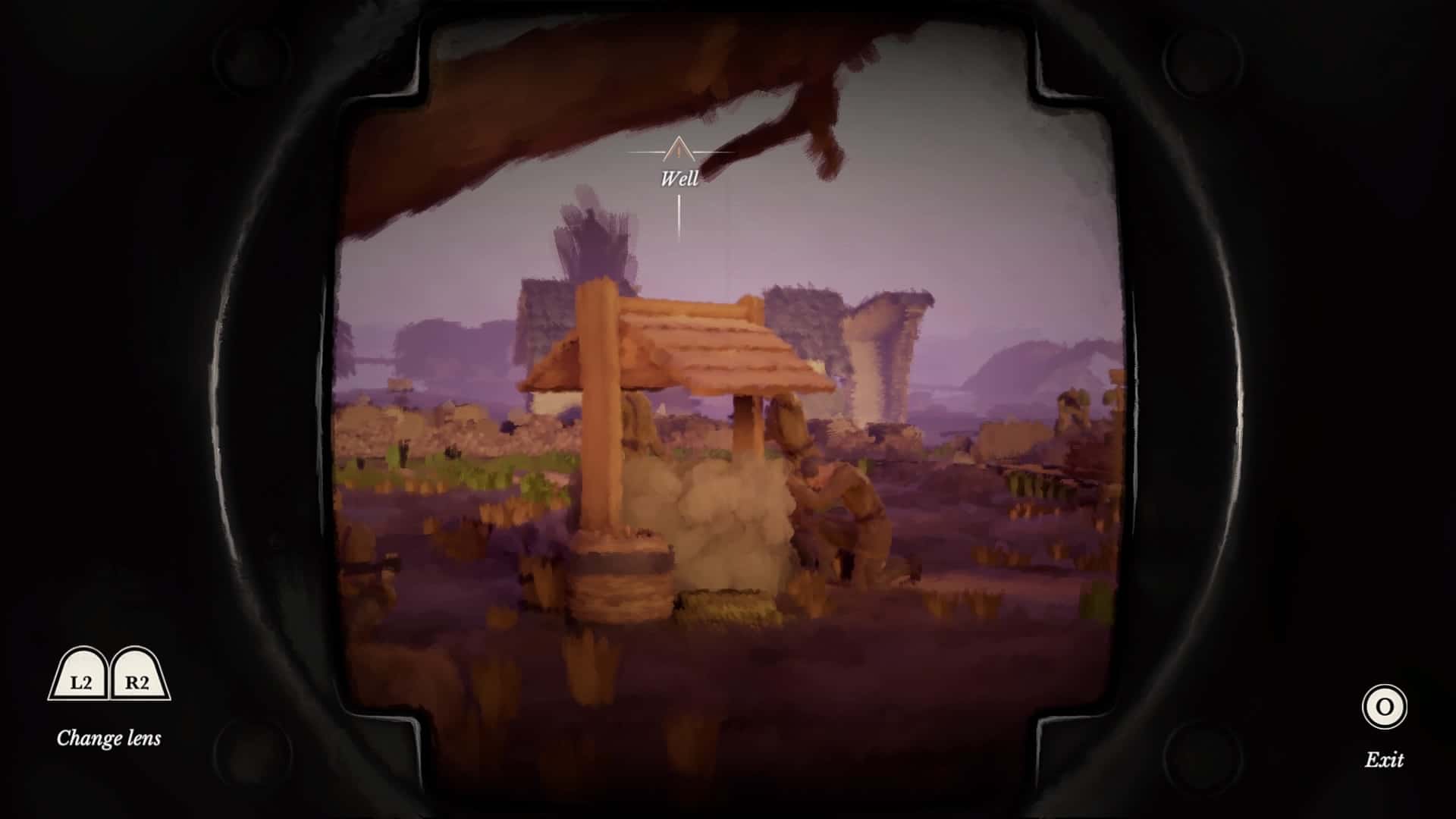 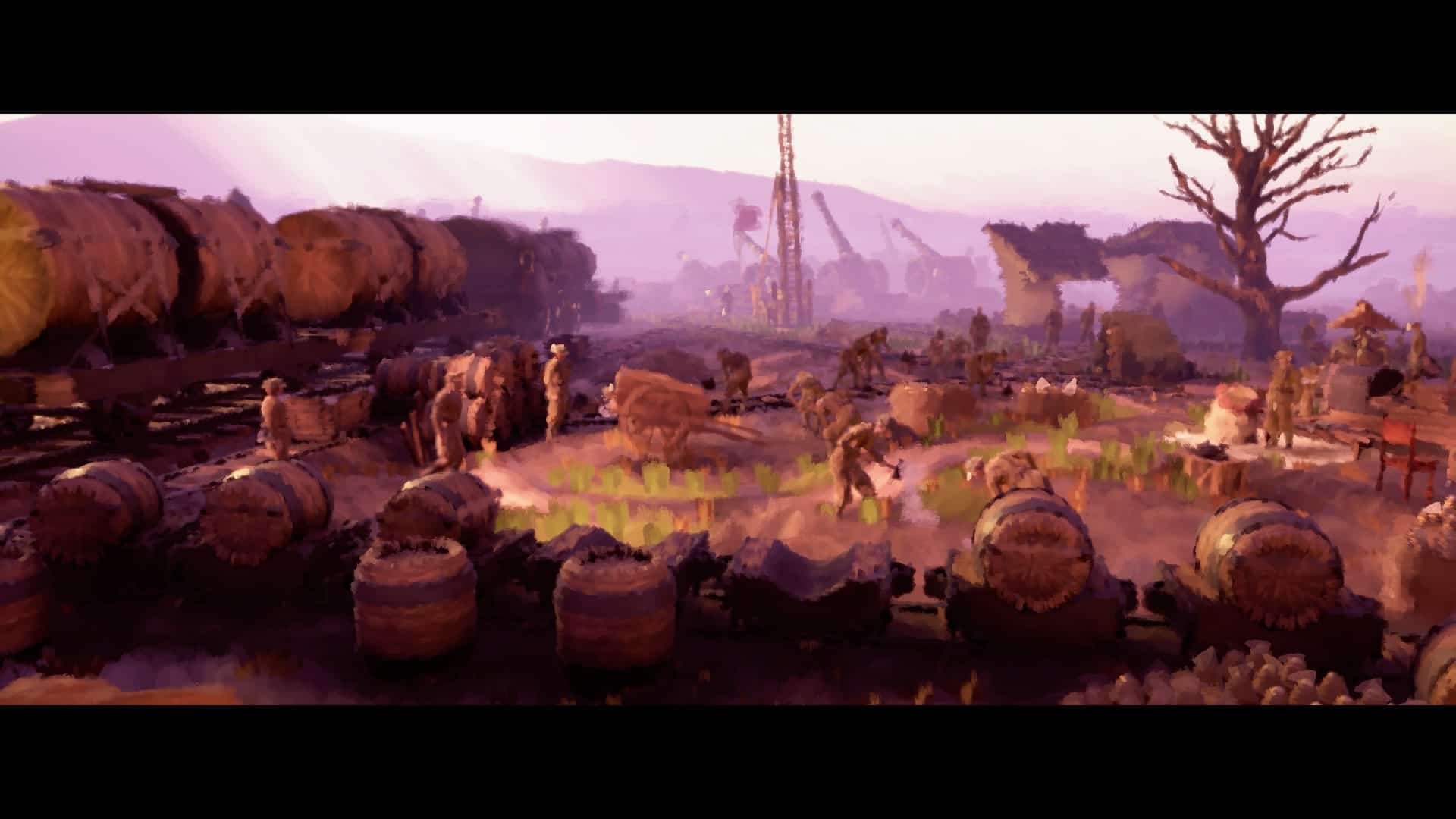 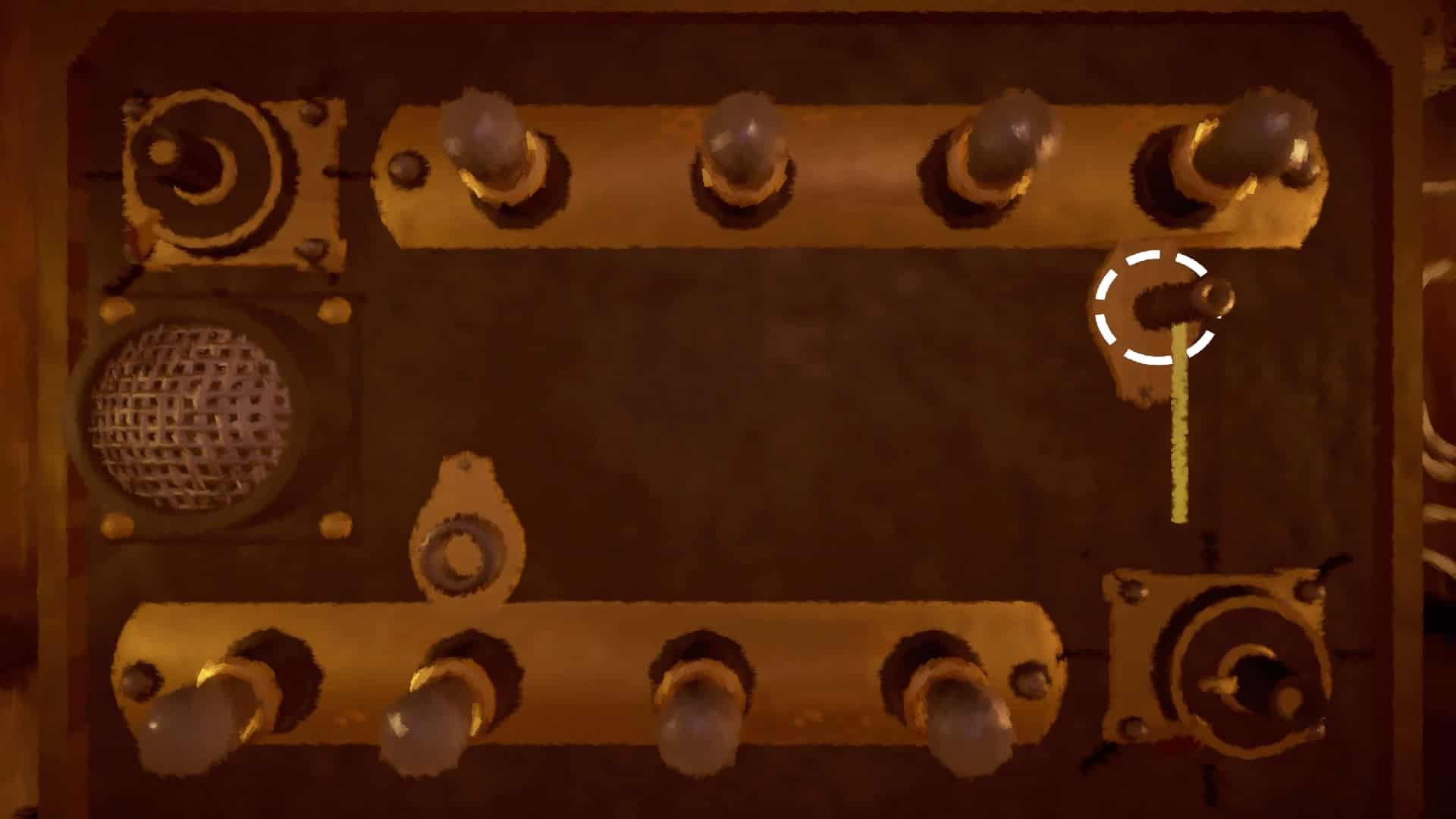 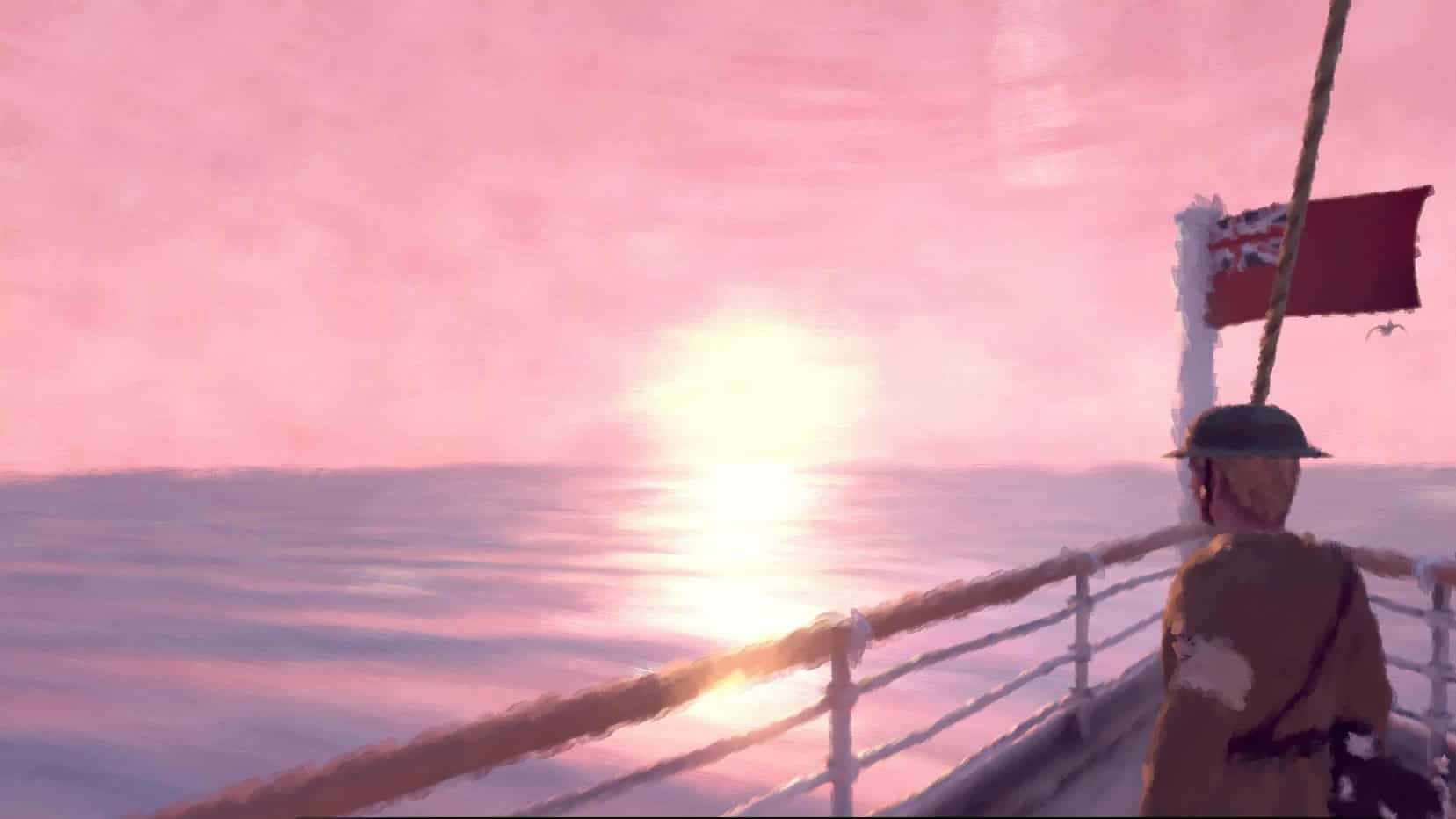 The game is mostly a narrative-driven adventure game, with the player controlling Harry and Kurt to complete simple puzzles and make occasional dialogue choices. Their professions are tied into gameplay; Harry is able to take photos of objects around him, and Kurt can repair radios and use his stethoscope to listen through walls.

However, the interactivity mostly takes a back seat to the storytelling; until the final chapter, little of what you do impacts the plot in any major way. That said, there were some fun ways to experiment with the interactivity. An example is how Harry’s girlfriend will respond in different ways depending on the photos you choose to send her throughout the story.

The game regularly alternates between Harry and Kurt’s storylines. Obviously, World War 1 is a fairly grim subject matter. 11-11 pulls no punches at exploring the negative aspects of the event.

However, many whimsical set-pieces and scenes add doses of levity when needed, particularly in Harry’s storyline. The story as a whole has an adventurous, yet melancholy tone throughout. At the end of each chapter, the game reminds you how long until the end of the war, ticking down until the ultimate resolution of the Great War.

“…sunsets and the red field of poppies makes the war a starkly beautiful place to explore.”

The game’s most striking visual flair is the distinctive art style, which resembles a moving oil painting. Overall, it is a beautiful stylistic choice to portray the era. The way that sunsets and the red field of poppies stand out makes the war a starkly beautiful place to explore. Sometimes, the game even just has the camera follow a flying bird across the landscape for some amazing scenic shots.

However, whilst this art style choice works fantastically for backgrounds and set pieces, I kind of wish the actual human characters looked more distinct. Whilst Harry, Kurt and certain other important supporting characters look visually unique and have well-defined faces, the overall smudgy look to the visuals makes it hard to distinguish the faces of others, and makes most of the characters look really similar and somewhat hard to connect with.

This isn’t overall much of a problem considering the core cast isn’t very big. However, it was a little weird how Kurt makes friends with several other soldiers who look the same. 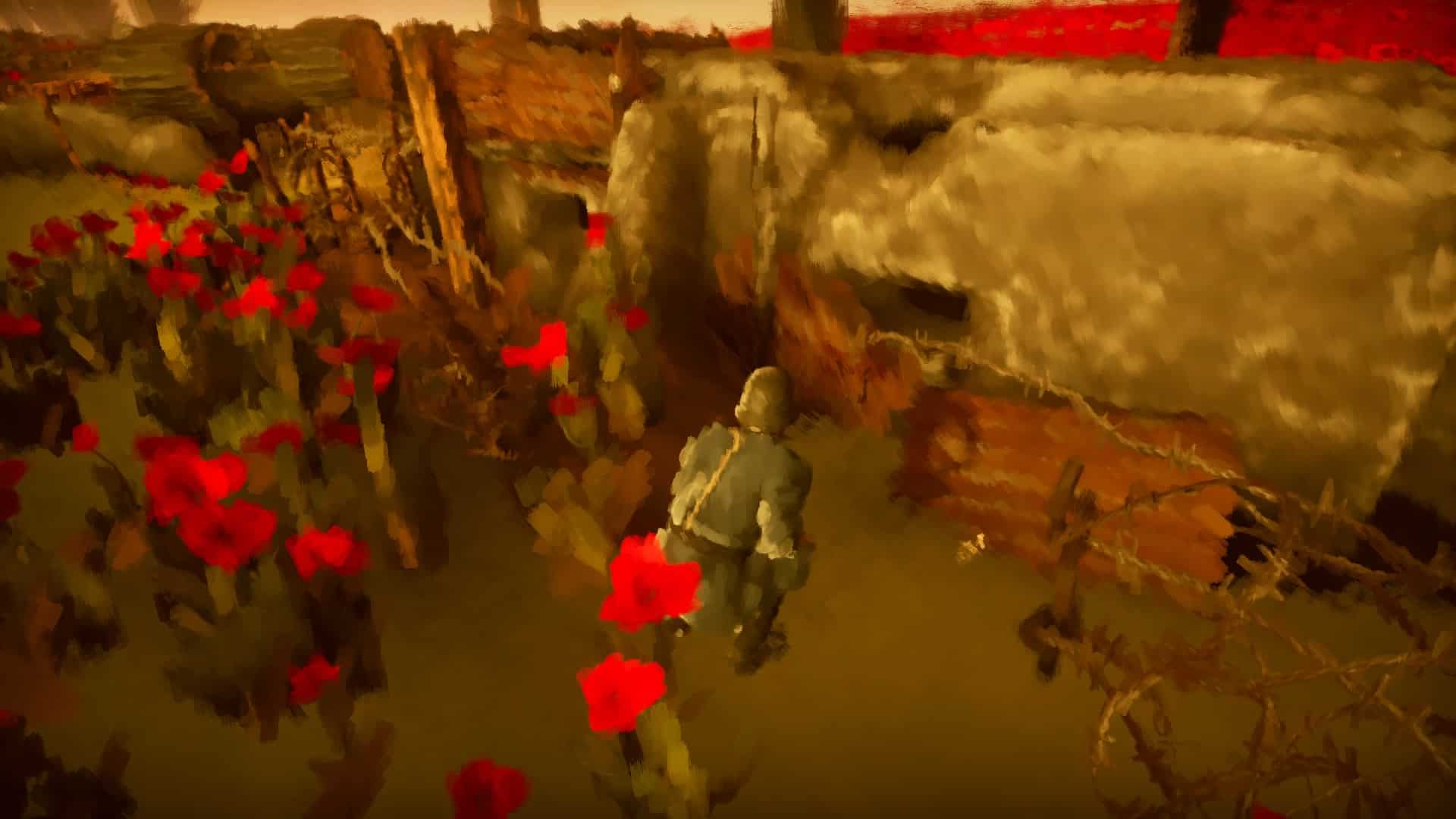 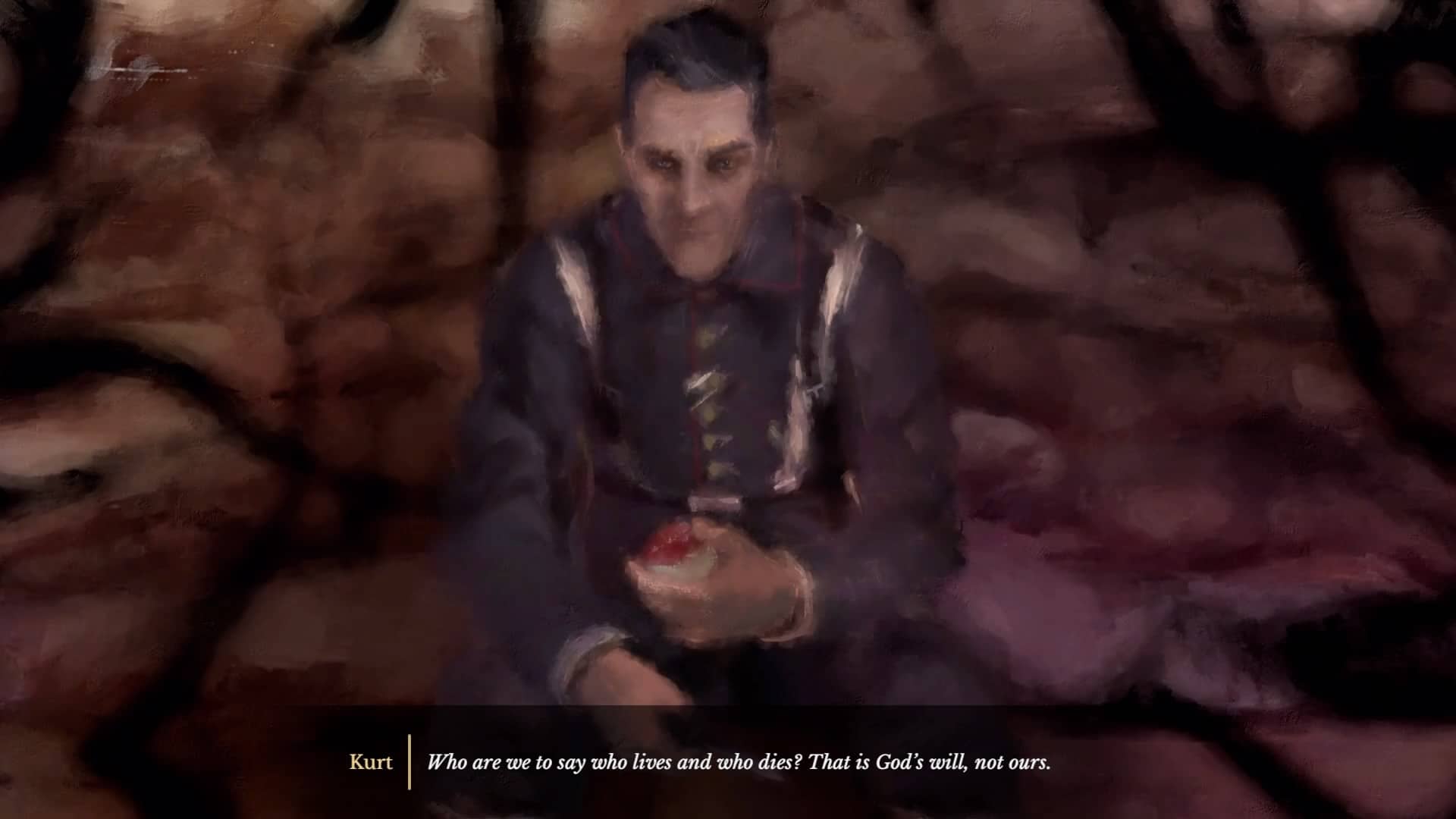 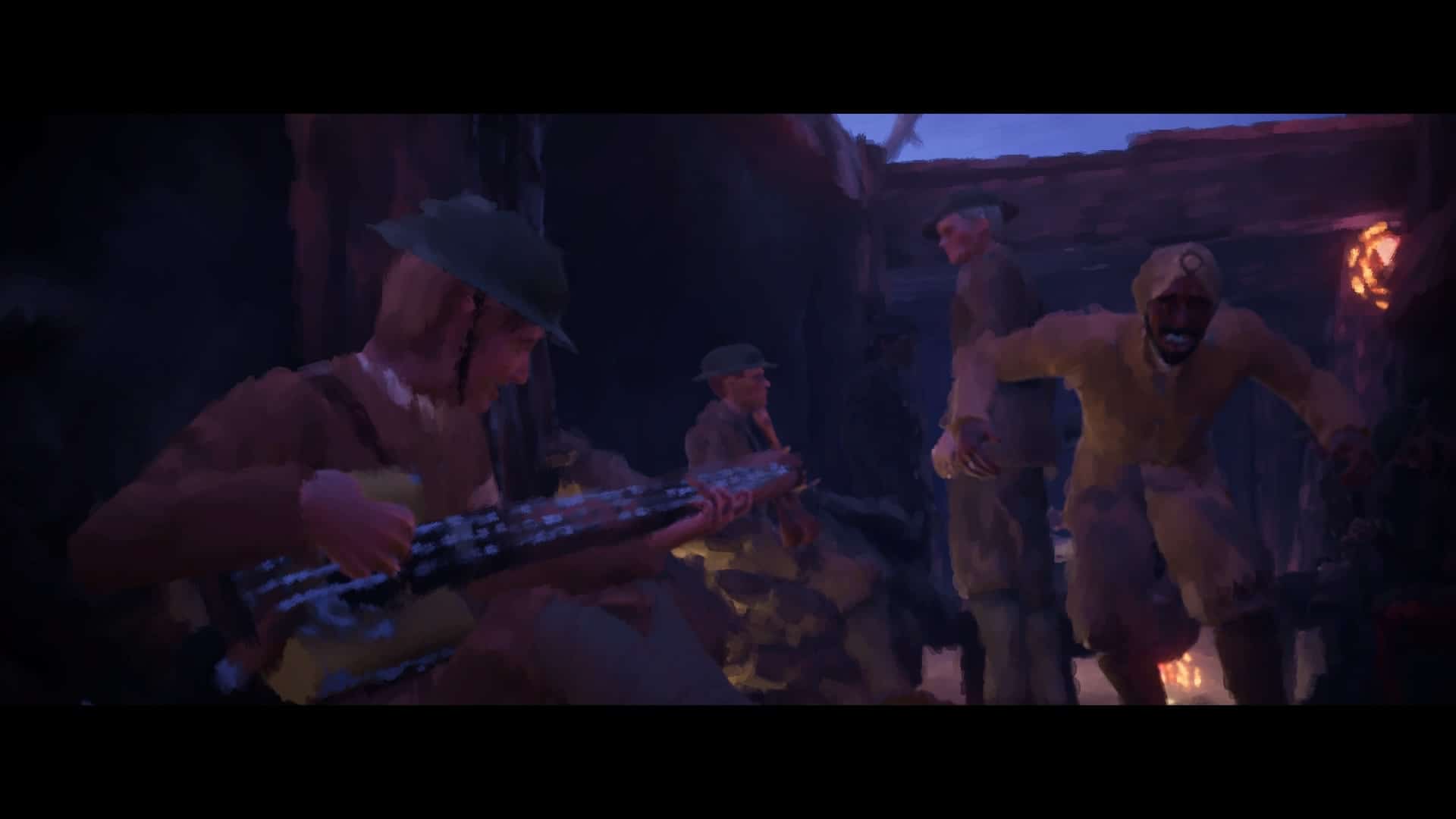 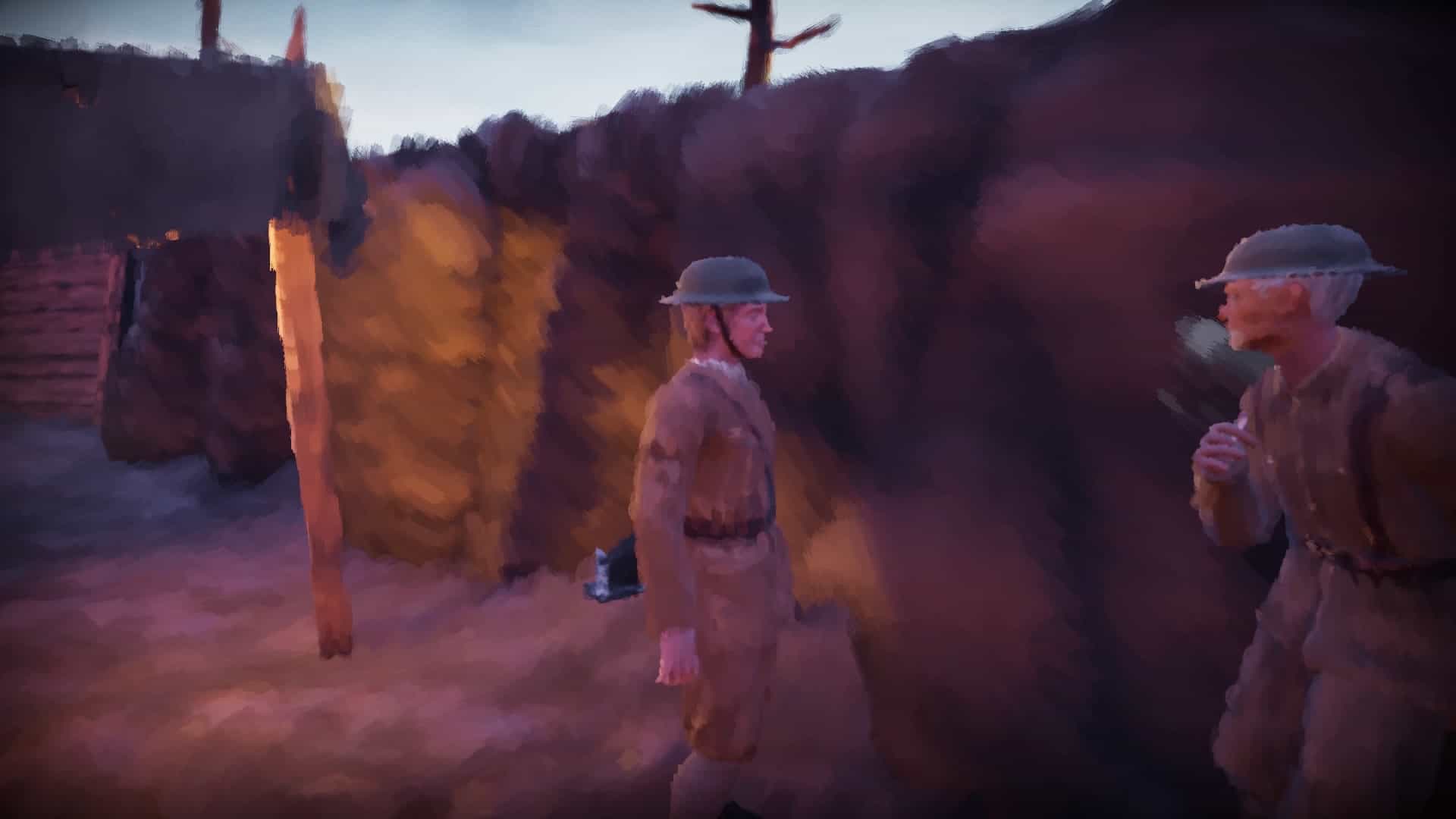 The game has a collectables mechanic, which on its surface is a great idea. Throughout each chapter, there are letters hidden throughout the environment. If you find all of them in each area, you unlock a real photo from the war, along with interesting historical factoids about the aspects of the era. These include how soldiers lived, or the differences between German and Allied gas masks. The problem is that the letters themselves are tiny, hard to distinguish from the background at a distance due to the art style, and there are often up to 4 in each area.

Whilst it does create some potential replay value to find all of the collectables, the chapter select function isn’t very precise. This means you may have to play through areas you have already completed to get to the area where you missed a letter.

Furthermore, they can be well-hidden, to the extent that it really started to ruin the pacing when I was wandering around for several minutes ignoring my objectives to find them. The overall goal of the collectables was a clever idea, but it may have been a better idea to make them less annoying to acquire.

Overall, 11-11: Memories Retold is an ambitious game that mostly achieves its goal in telling a gripping and emotional story about the First World War. It highlights how everyone at the time was impacted, from the soldiers to the civilians, and why war must be avoided whenever possible. In particular, the ending I received (of which there are several, depending on your choices in the final act) really stuck with me.

It isn’t the most mechanically complex game out there, and might not satisfy players looking for a more interactive experience. However, if you’re in the mood for a beautiful and well-written story about WW1, then I can absolutely recommend 11-11: Memories Retold.