Bethesda for the longest time have been renowned for their single-player, vast open worlds. Other developers have previously helped them expand those worlds into a multiplayer space, such as Zenimax Studios with The Elder Scrolls Online. However Fallout 76 marks Bethesda’s first official foray into a multiplayer realm.

In hindsight, Fallout 76 feels like the natural direction the series was heading, with Fallout 4 playing a big role in establishing the survival mechanics that would be utilised here. With narrative, exploration, survival and online elements all helping to form the game as a complete package, there’s a lot to unpack here.

With the arrival of online and survival elements comes a shake up to Fallout’s traditional narrative structure. Gone are the existence of living human NPCs. Bethesda made it clear that they wanted any human you come across in the game to be another real player. With this change comes the realisation that quest givers and dialogue won’t function in the same way. Quests are now distributed via audio log, machines, or natural events occurring in the world that you can stumble across. And dialogue options no longer exist whatsoever, with your character being spoken at rather than spoken to. There’s still an overarching narrative, although this transition to a new narrative structure removes a lot of the motivation and engagement for me. There’s something very detaching about how Fallout 76 unfolds its story. As someone who has never enjoyed audio logs, notes, and computers as a story-telling device, I can’t help but feel disconnected.

Events are a new quest type for the Fallout series, although I can’t help but draw comparisons to the terrible ambient quest system introduced in Fallout 4. Thankfully things haven’t gotten as bad here as the excruciating “another settlement is under attack” approach. In fact it functions a lot more similarly to how Guild Wars 2 handled questing. Events feel organic and dynamic and assuming enough people are partaking, they can be exciting to participate in. Although they certainly do feel easily ignorable and will lose value the more frequently you see them occur.

For all its faults, I will always back the Fallout series for its incredible focus on exploration. Fallout 76 introduces a tower mechanic where you climb to the top, survey the area and reveal new locations on your map. This is becoming a big trope amongst open world games. However there’s one thing different about Fallout 76. The locations you reveal are all unique, interesting, and not carbon copies of one another. No other game series can claim this, not even the games that have been revered as the pinnacle of open world design. Fallout 76 allows you to walk in any given direction and stumble across new and interesting locales every single time and that will always be a huge positive in my eyes. It’s these unique locations that make exploration in Fallout 76 so enticing. Every icon on the map is something different and you have no idea what you may come across.

Context dependant narrative is also a big thing for the Fallout series. Stumbling across a bunker and piecing together all of the little details scattered around you to form a mini narrative is incredibly rewarding. Lore is uncovered as you explore and the dots begin connecting. Whilst past entries in the Fallout series handled this type of context dependant narrative better than 76, it’s still present and makes exploration more satisfying.

In your exploration you’ll also stumble across the most varied and most impressive monster designs the series has ever had. Giant beasties will roam the land and the sky and horrifying creatures could be just around the corner. It’s great to see and adds a huge amount to the overall experience. Taking down a giant critter with a group of strangers who have gathered to join the hunt is an amazing feeling.

Players have been pleading with Bethesda to allow cooperative play in their big open world games for over a decade now. And for all Fallout 76’s faults, it does actually fulfil that desire for many wasteland adventurers. Although fulfilling a desire and exceeding expectations are too different things. The reality is that Fallout 76’s online elements are functional but not outstanding. It works in many ways but it also fails in many others.

You can grab your buddies, jump in a team and venture the post-apocalyptic world. Loot caches are instanced but EXP won’t be shared. There’s also no level scaling but quests can be embarked upon cooperatively.

Player v Player is enabled in the game but most people I come across don’t actually engage in it. It’s actually very surprising, but my experience with Fallout 76 and the other survivors around me has been a very positive one.

Players are friendly and mostly keep to themselves. It’s actually quite an odd thing to see in a multiplayer game. On the one hand I’m glad that I’m not dealing with griefers on a regular basis, but on the other hand the game ends up feeling quite lonely. Players ignore one another and the most I tend to get is a nervous ‘thumbs up’ emote when I happen across another player. Whilst players do mostly ignore each other, I did come across another person early on in my Fallout 76 journey who actually accompanied me for a multi-hour long adventure as we chatted and swapped tips and tricks. It was a great moment that very few games outside of the MMO genre have been able to provide me.

Unfortunately these new online aspects also bring their own complications. Server disconnections are certainly a possibility whilst you play and you should except a certain amount of network lag too. It’s nothing terrible but that slight delay between pulling the trigger and your enemy registering the hit is noticeable. You may also see the loot in caches load in for a split second before you can begin interacting with it. I also have a huge problem with the lack of push-to-talk functionality for microphones. This is multiplayer 101 for PC games, and not having this functionality means that white noise and the clacks of keyboards are being projected across the wasteland. Many players, myself included, have now opted to disconnect our microphones altogether. A terrible solution to a problem that should have never existed. 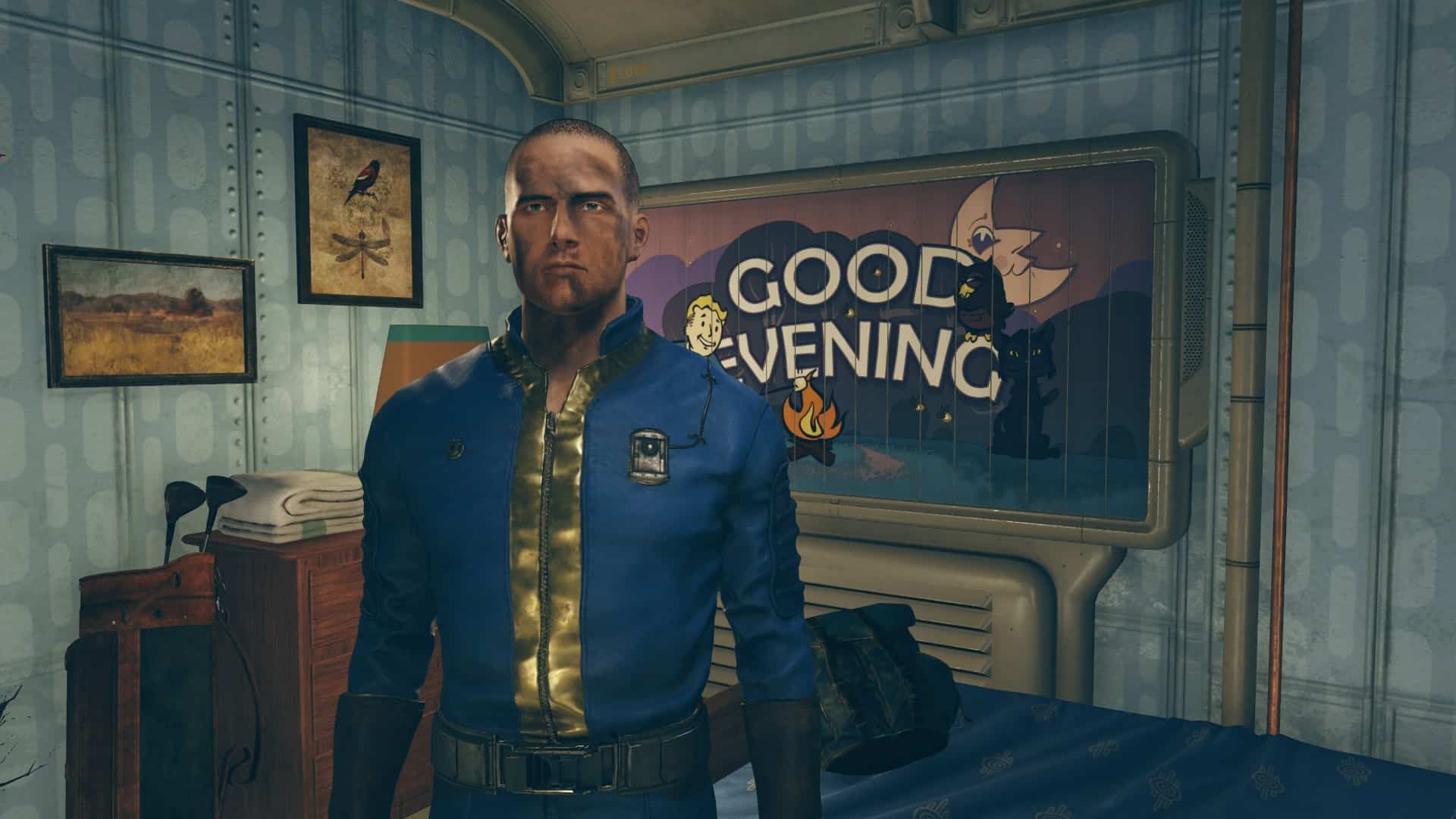 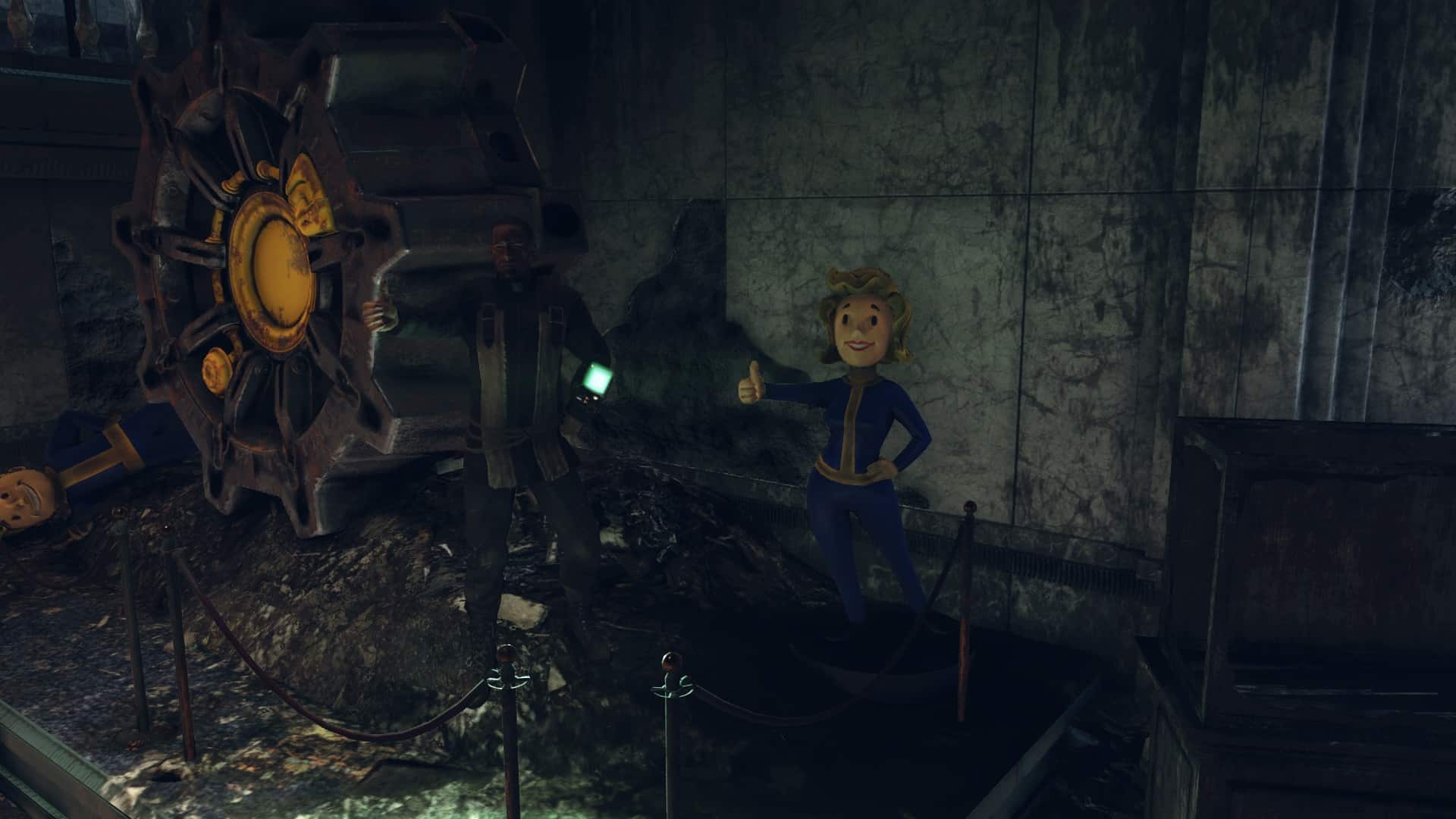 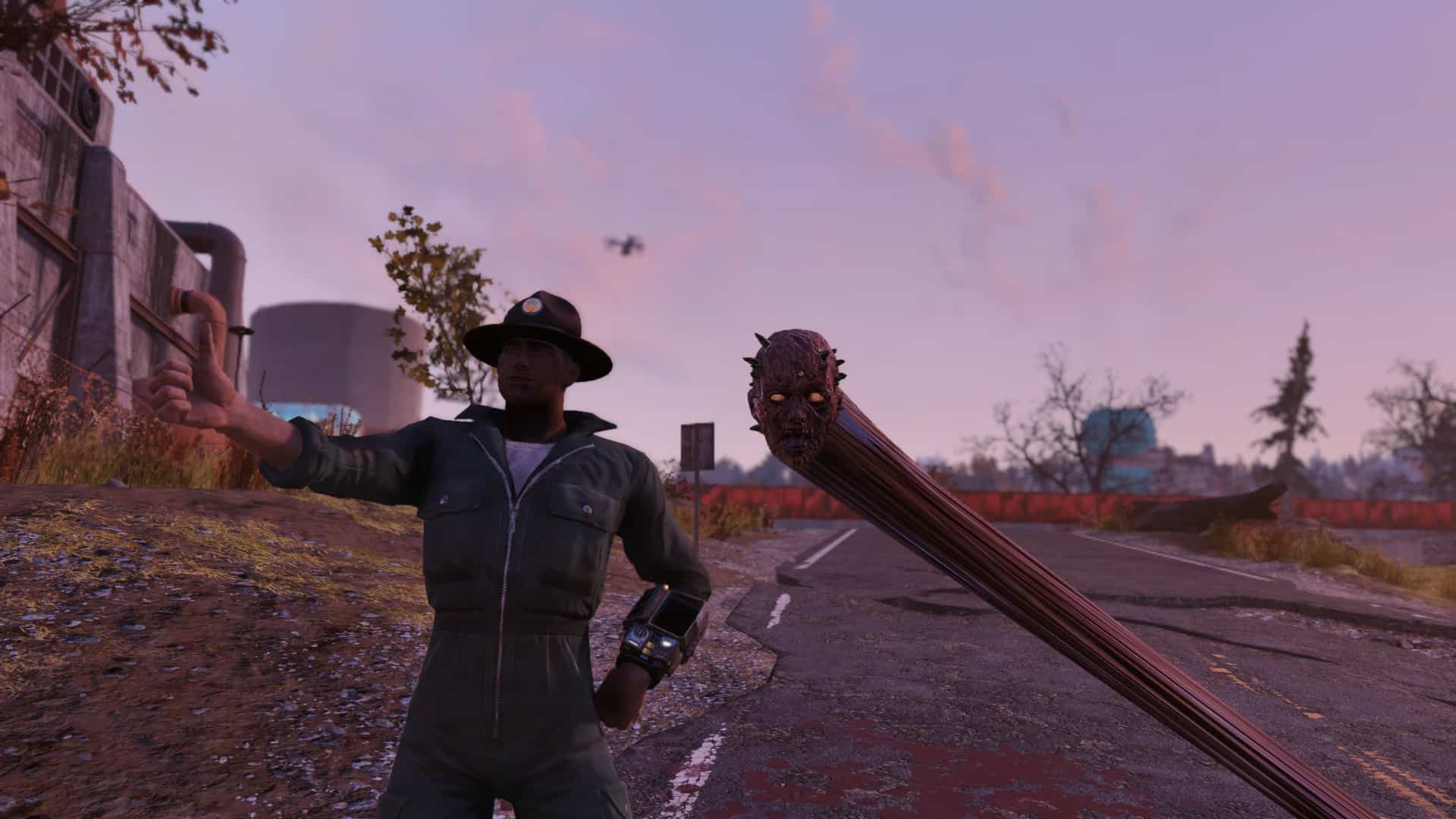 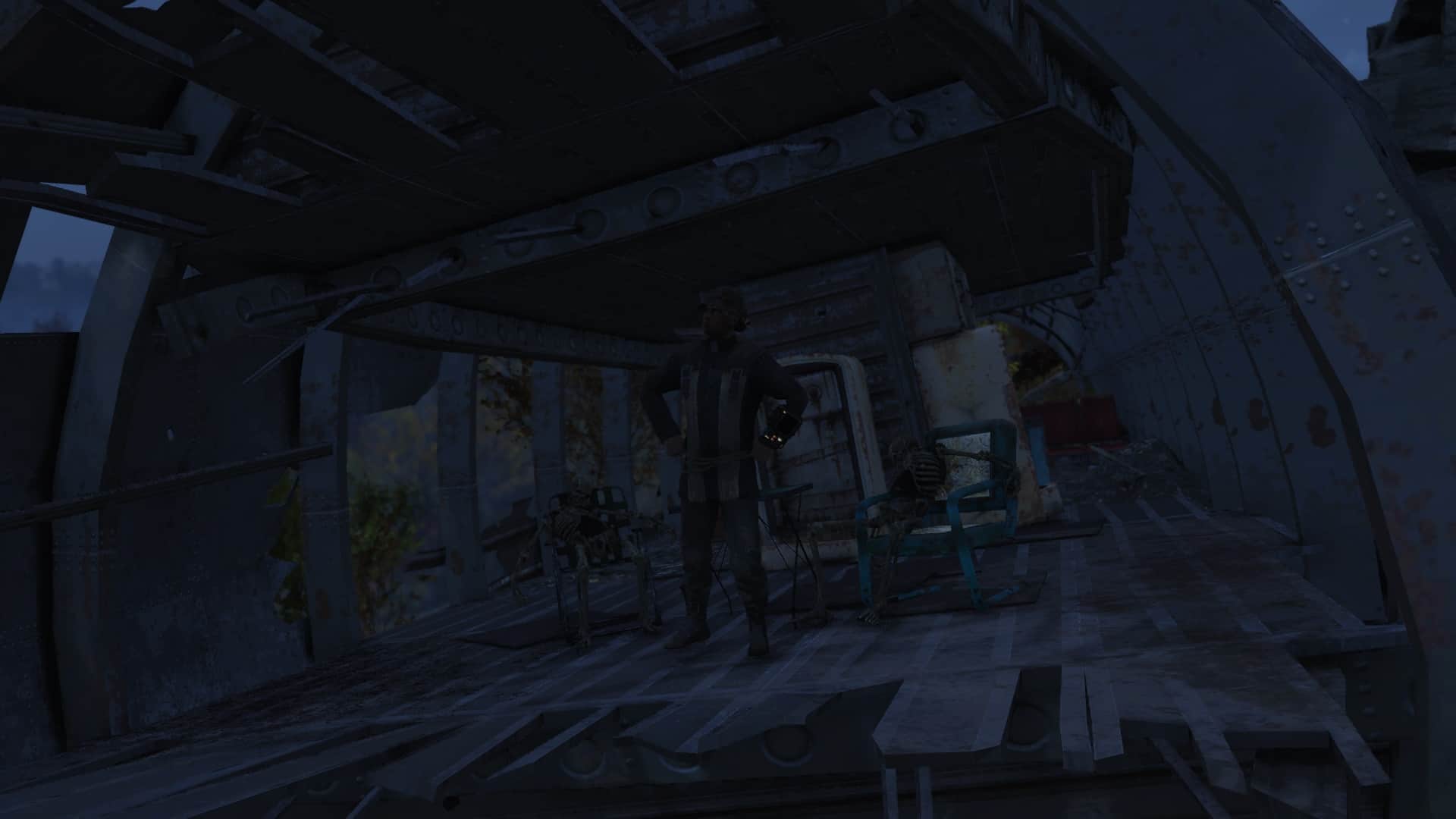 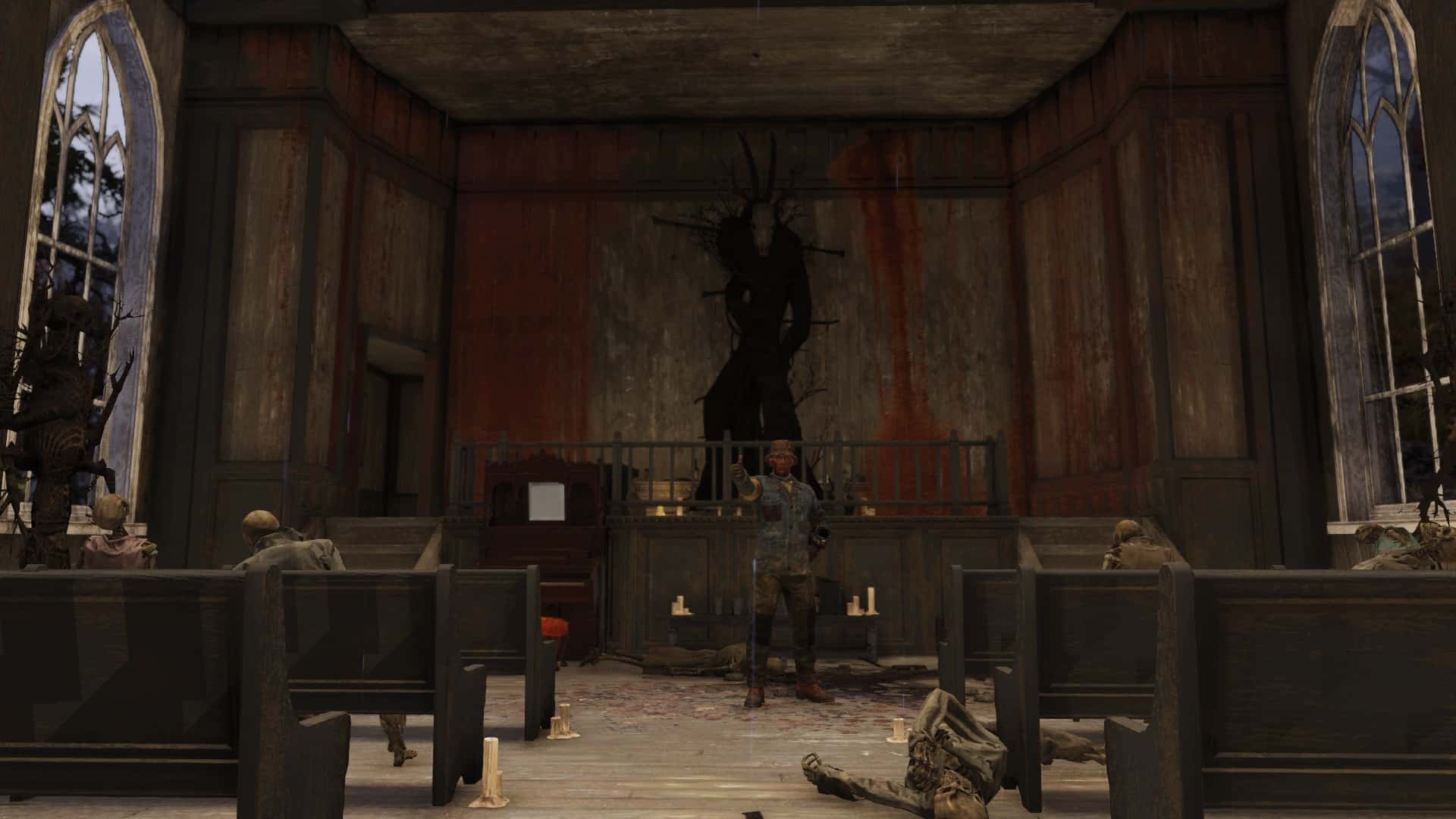 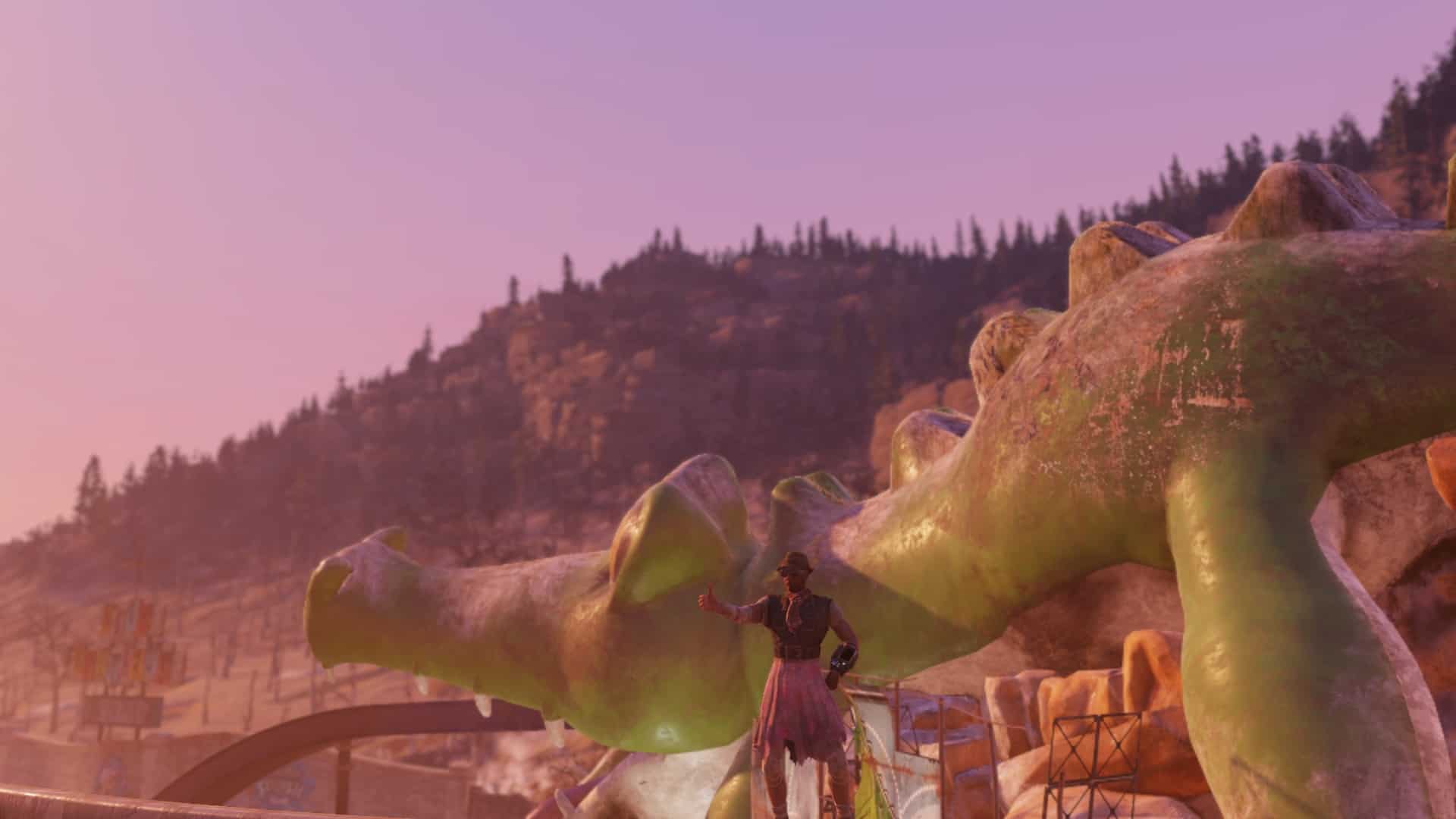 Fallout 76 is a survival game that comes with many stock-standard survival mechanics. You’ll have a hunger and dehydration bar that you’ll need to keep your eye on, you can catch diseases, you can craft weaponry and armour, and you can build your base. Many of these mechanics are actually lifted directly from Fallout 4, but there’s definitely an increased focus here. The perk system has been overhauled and it’s actually very satisfying. You collect cards which can be placed in their corresponding S.P.E.C.I.A.L. slot with higher levels unlocking the ability to use more cards and more powerful cards. Base-building is competent and the ability to relocate your base on the fly is great. Unfortunately the way this actually works never seems to remain consistent, with parts of your base breaking off and needing to be reconstructed. You’ll need to go about scavenging resources in order to build your base, craft your weaponry and armour, and keep yourself fed and hydrated. It’s a big gameplay loop in Fallout 76 but one that’s burdened by a huge problem – weight management. The game feels as though it’s built for you to scavenge but then you’re punished for actually doing so. Keeping yourself from becoming encumbered isn’t even just a problem that stops with the player, but it continues back to your stash as well. I’ve never been burdened by weight management issues in a survival game more than I have in Fallout 76. It’s a big problem, and the limit inflicted upon the player isn’t even a deliberate design decision that forces you to make difficult choices on what to keep or toss. It’s a limitation Bethesda have stumbled across in their own load capacity that they have already addressed and are looking to fix.

The game is fairly survival light, but in many ways it comes off quite well when compared to other survival games. The world you’re exploring is hand-crafted after all, not procedurally generated. The world is also very big and varied in differing locations. However the motivation to continue engaging with the game’s survival mechanics is somewhat limited. If Fallout 76 had a great narrative hook or exciting goals to continue striving towards, it would make for a really solid survival game. In it’s current form though, Fallout 76 is mostly about the exploration, but I don’t know if that’s enough to keep me going. Especially when you’re faced with some aggravating glitches.

There’s no way you can discuss a Bethesda game without talking about the various glitches and bugs that riddle the game. In fact, if we’re honest, glitches in Bethesda games are so well known they’ve reached meme levels of notoriety. They’ve become a known entity and something Bethesda themselves seem to have accepted as an inevitable and justifiable constant. Here’s what I’ll say on the matter. If you’ve played Fallout 4 or any of Bethesda’s past games, you know what you’re in for. Bugs unfortunately are so hard to pinpoint that everybody’s experience will differ. For me, I never encountered anything that ruined the game altogether. Annoyed me? Sure. But ruined? No.

I personally ran into issues with quests not being able to be completed, enemies ragdolling into oblivion, inconsistency with my framerate, enemies popping into existence in front of me, and settings not saving between play sessions. Part of me feels like this is becoming par for the course with Bethesda games, although I’m also aware of the fact that just because Bethesda is notorious for glitches, doesn’t make their existence any more acceptable. What we need now from Bethesda is to at least try and right these wrongs. We need constant updates, bug fixes, balance patches, and anything that can make the ride a little less bumpy. We just have to see if they are up for that task.

There are moments when Fallout 76 is firing on all cylinders. When a group of strangers come together to take down what is essentially a raid boss or gather around to watch as a nuke detonates in the distance – these moments offer a glimpse into the greatness Fallout 76 contains. Unfortunately that greatness is more often than not obfuscated by badly implemented game systems, a bland narrative, and a myriad of bugs. If Fallout 76 launched as an Early Access title, we may be having a different conversation. But as of right now, the game is a middling attempt to move the series in a new direction.