From the outset, Red Dead Redemption 2 is not a game intended to be fun, but to be important. It is a game that bends our expectations about what a game should and could be. It exists right on that “cutting edge” that is so often referenced but so rarely seen, and I believe will be remembered for generations to come. In short, Red Dead Redemption 2 is one of the most enthralling, engrossing, and enriching video game experiences I’ve had in my many years as a gamer, and even after 60 hours I feel like I’ve only just scratched the surface.

Before starting Red Dead Redemption 2, I was admittedly a little apprehensive about playing as Arthur Morgan. I was worried that all the time I shared with John Marston in Red Dead Redemption would make it hard to step into a new pair of boots and embark on another long journey in the West.

I shouldn’t have worried at all.

Arthur Morgan is a striking, compelling protagonist and serves as the perfect vessel to carry the player though the trials and tribulations of the Van Der Linde gang. His individual perspective frames the events of the game in a truly memorable way, and it did not take me long to settle in to playing as Arthur. He is a deeply layered, troubled man and the script does a masterful job in allowing this depth and nuance to shine through during the game.

Rockstar definitely knew there would be a swathe of players in the same boat as me; burdened by the memories of playing as John in the first game. As such, John features heavily in the game’s story. Without spoiling anything, his character arc is definitely one of the shining features of the game; a glowing touchstone that connects this sequel with the events of the original game. Having the context of the original Red Dead Redemption in mind as I played through this game made everything hit so much harder.

The cinematography and camera work during the game’s cutscenes is second to none; this could be the most enthralling game in terms of cinematic style I have ever played. Every single shot, every single frame is masterfully captured and presented in such a way that the beauty leaps off the screen and soaks into every aspect of the experience. Add in the cinematic camera, an optional camera perspective that presents the entire game as a cutscene, and every natural gameplay moment can become as cinematic as the scripted ones.

Indeed, Red Dead Redemption 2 is just about the most beautiful game I have ever played – and I’m playing it on a stock PS4. I can only imagine how good this game looks on a Xbox One X or PS4 Pro, and honestly I am fighting the urge to run out and buy a 4K TV and upgraded console as I write this review. Every blade of grass blowing in the breeze, a shallow stream glistening in the sunlight, the soft glow of morning light through the tents in camp; every pixel shines with more glory and richness than has ever been seen before.

The devil truly is in the details. Let’s take hunting for as an example: fire a rifle shot through a deer’s back leg, and there will be a bullet wound in the exact spot the shot hit. The deer will limp relative to the region of its leg that was injured; a thigh shot will see short little limps, where an ankle shot will see the poor creature struggling to stand. Sure, this is a grim anecdote, but it goes to show just how into the weeds Rockstar Games went with making Red Dead Redemption 2 as immersive as possible.

Combat is much the same, with as much realism and detail put into each shoot out as there is detail in the story cutscenes. Shoot a man in the head while he wears a hat, and a sizzling bullet hole will be seen in the hat while red blood slowly leaks through. It’s a disgusting and vicious level of detail, but again proves that Rockstar Games were out to make more than a game; they were out to make a statement.

Epic kills are rewarded with slow motion kill screens as seen in the image to the left; a fleeting celebration of your violent prowess. Some of the screens I bore witness to looked like they were pulled straight out of a Western movie; film grain and all.

This level of detail extends beyond the visuals and the combat too. The audio production is truly next level, perhaps most noticeable when traversing the many different climates present in Red Dead Redemption 2. The difference in tonal quality between snow covered grass, crisp fallen leaves, swampy mud, and cobblestone roads is so striking that it rivals some of Hollywood’s best sound engineers. The dynamic soundtrack is nothing to turn your nose up at either; musical quips punctuate the air as Arthur traverses the frontier, with expansive western-flavoured soundscapes dancing around the battlefield during the game’s more intense moments.

Perhaps Red Dead Redemption  2’s greatest strength is in how well the game’s systems lend themselves to the intricate and detailed gameplay. Balancing Arthur’s “cores”: health, stamina, and Dead Eye, is at first a tad daunting, but quickly becomes integral to your survival in the Wild Wild West. Gone are the days of power-fantasy strong men blasting their way willy-nilly through scores of enemies; Red Dead 2 sees you maintaining your weapon’s integrity, with reloading speed, damage, and fire rate decreasing substantially as your weapon becomes more grimy and clogged.

You better believe you’ll be spending time with your horse, too. Brushing and feeding your horse regularly is paramount to the health of the steed, with each horse having its own stats for its cores as well. War horses have more health but run much slower, while racing horses and quick yet fragile. You’ll soon find out which is best suited for your playstyle; I myself use a trusty War Horse named Diablos as I travel the dusty plains of the south.

Beyond the stat management of Arthur and your horse, you need to ensure you’re there for your companions in camp – both financially and personally. Donating regularly to camp funds will mean you can upgrade the stocks and quality of provisions, ammunition, and medicine available at camp. Completing tasks for gang members will result in unique rewards and provisions, as well as a noticeably friendlier atmosphere around the grounds.

The heart of Red Dead Redemption 2 truly does lie in the core members of the Van Der Linde gang, and their dealings with fringe members, associates, and enemies. Other than John, there is Dutch Van Der Linde (the leader), Bill Williamson (demolitions expert), and Javier Escualla (the bandito) returning from the original game.

Each character brings a new depth, perspective, and complication to the table in the Van Der Linde gang, and the game does well to ensure each character is given their moment to shine. I found myself growing attached to even the most tertiary of side characters, as each interaction feels powerful, important, and crucial to the overarching plot. 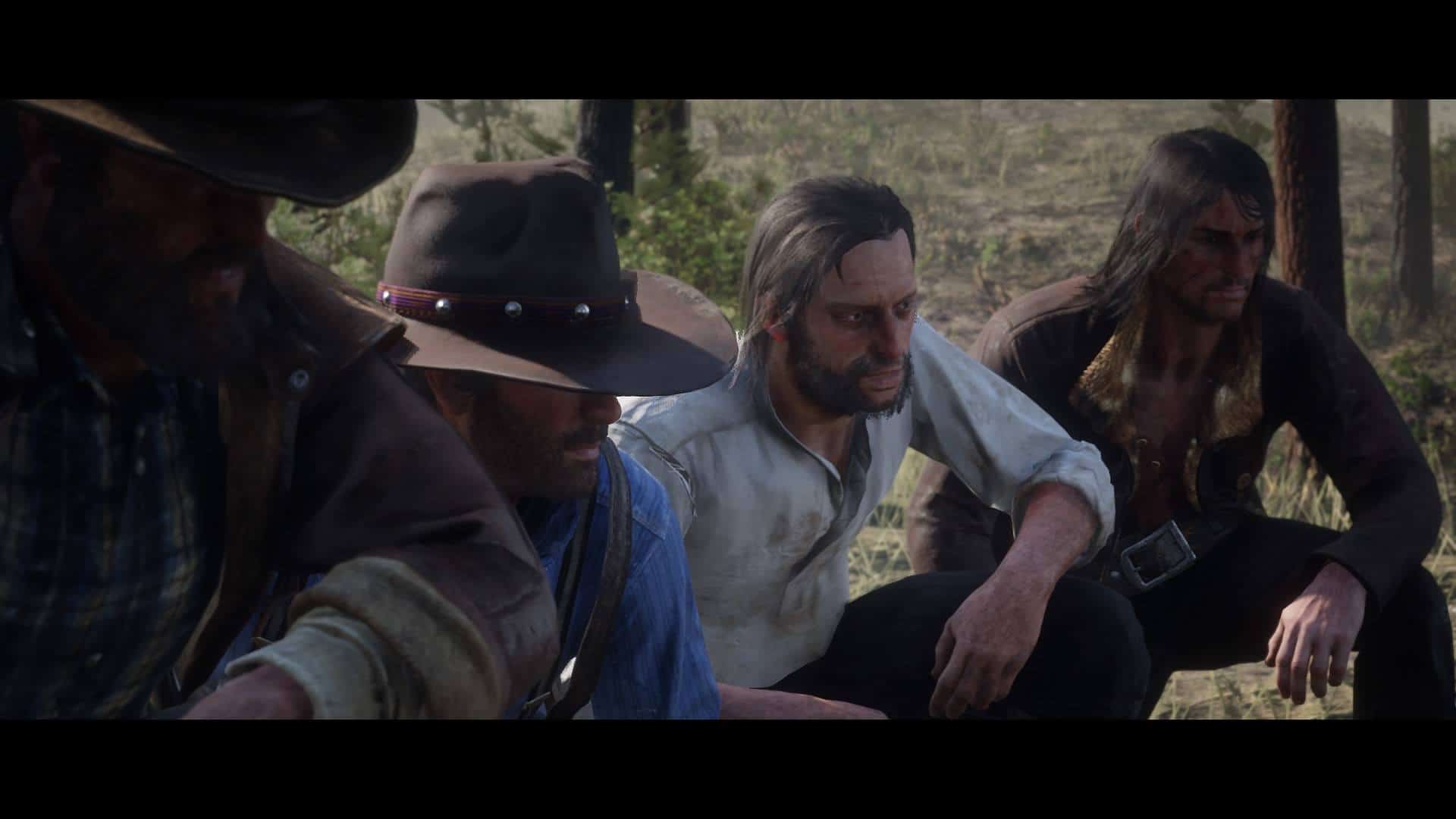 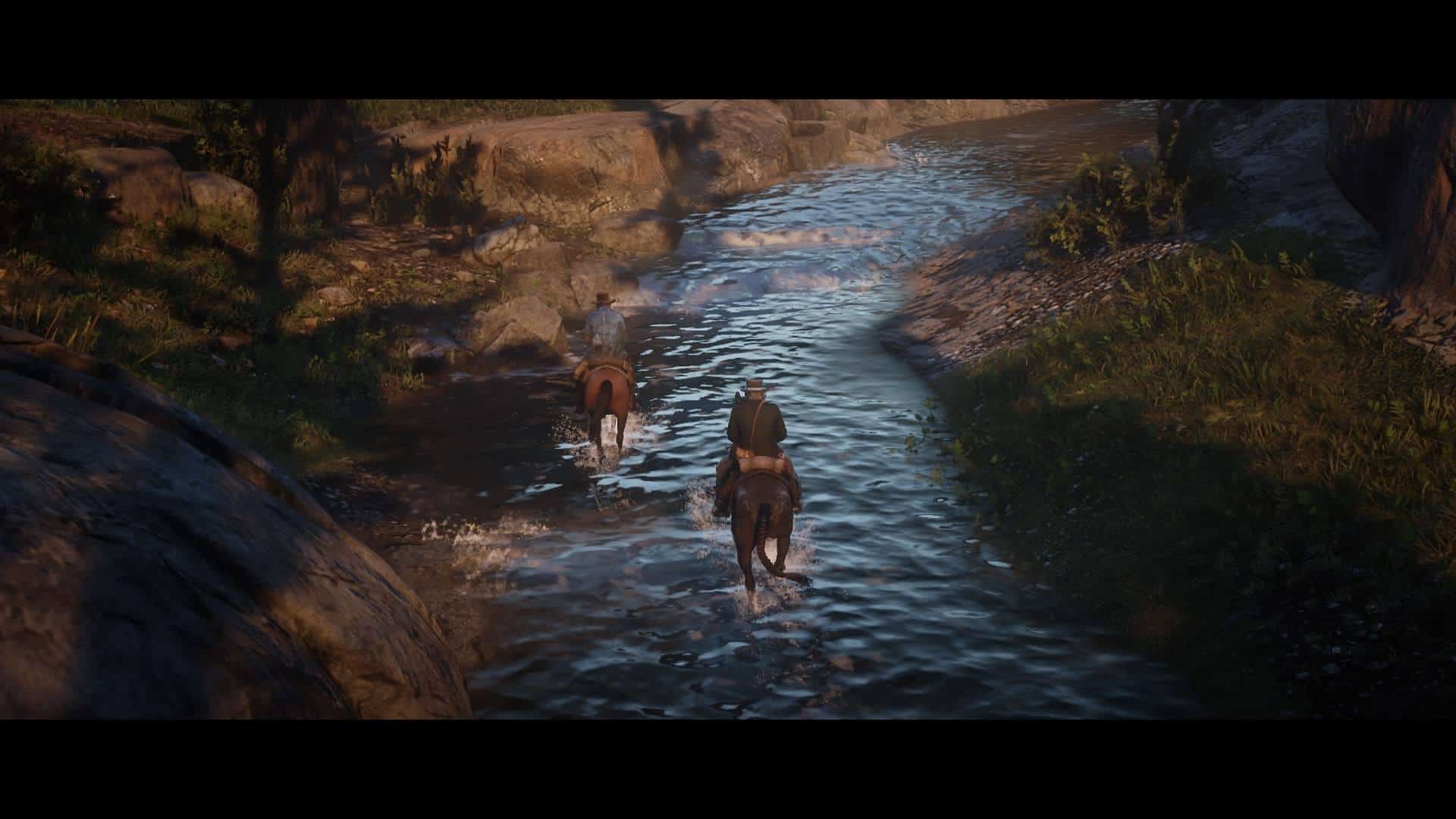 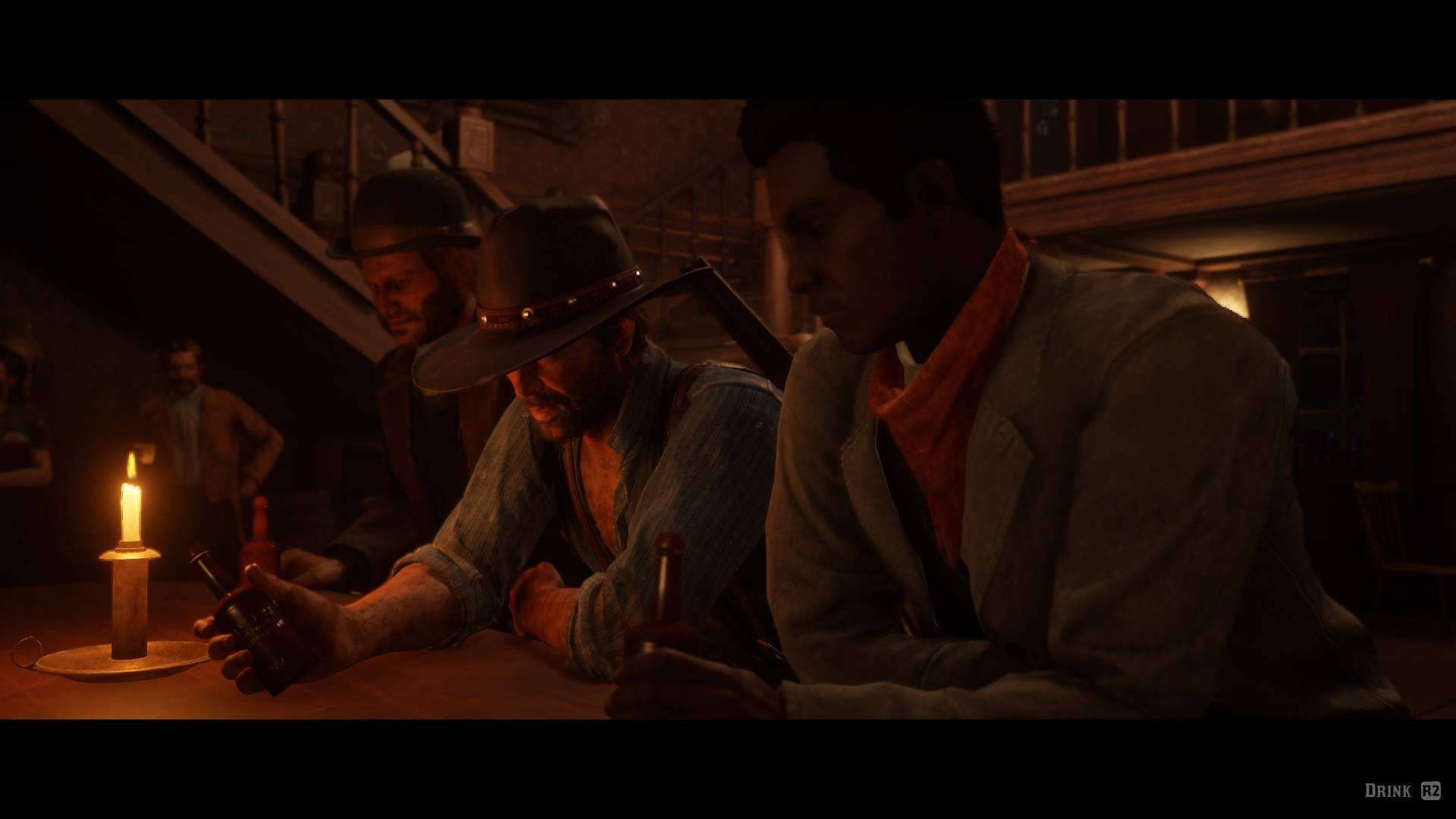 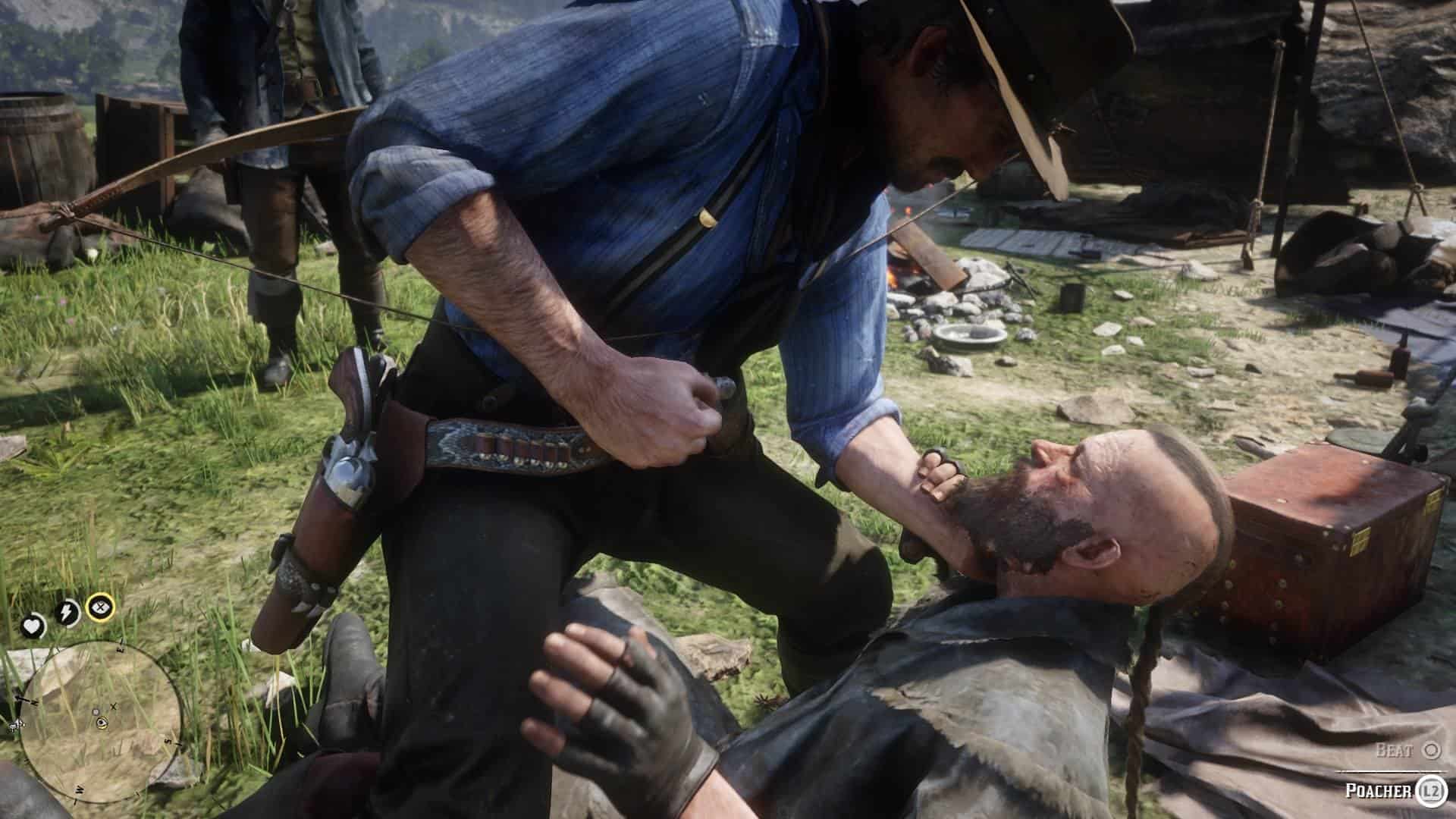 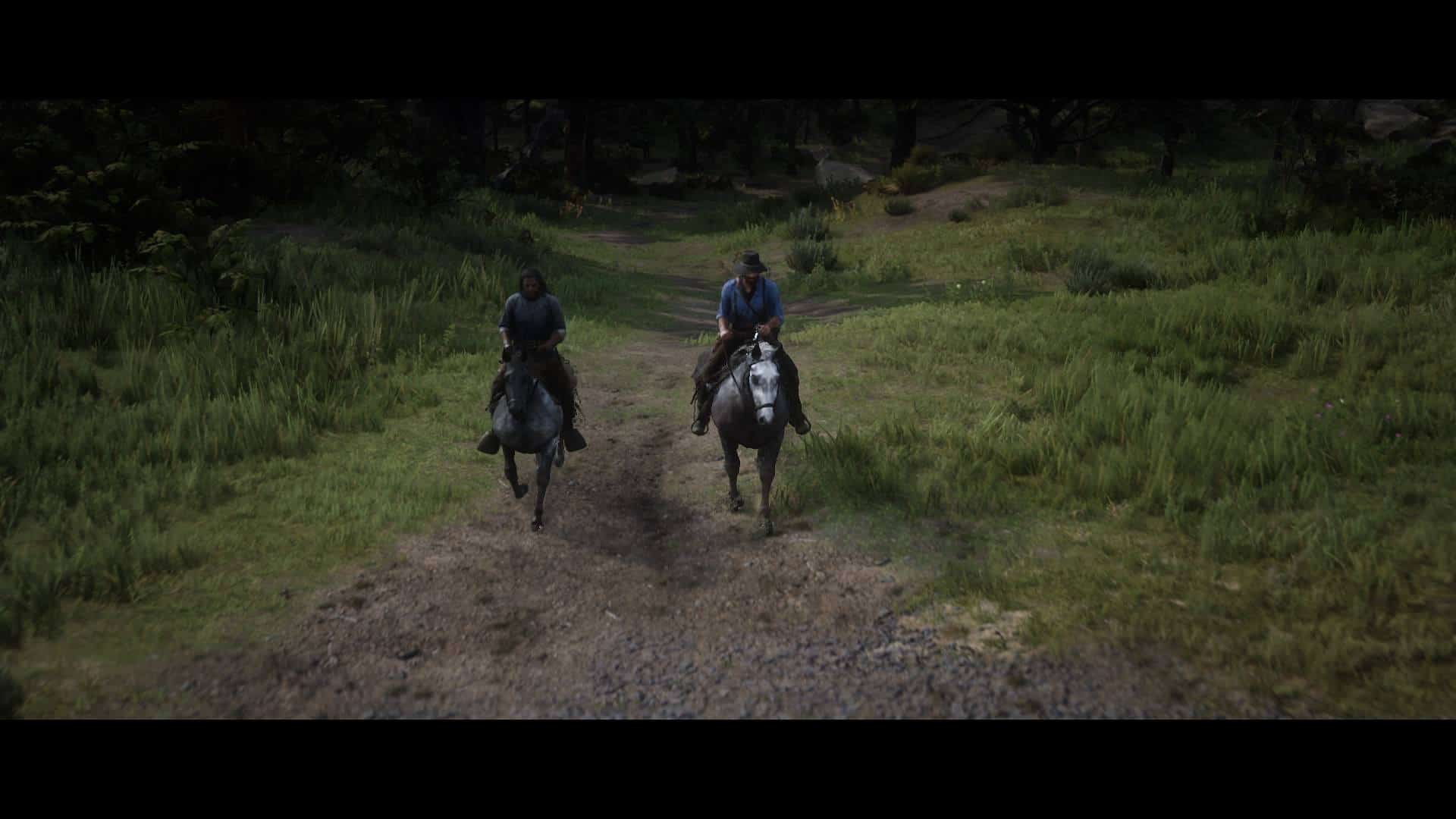 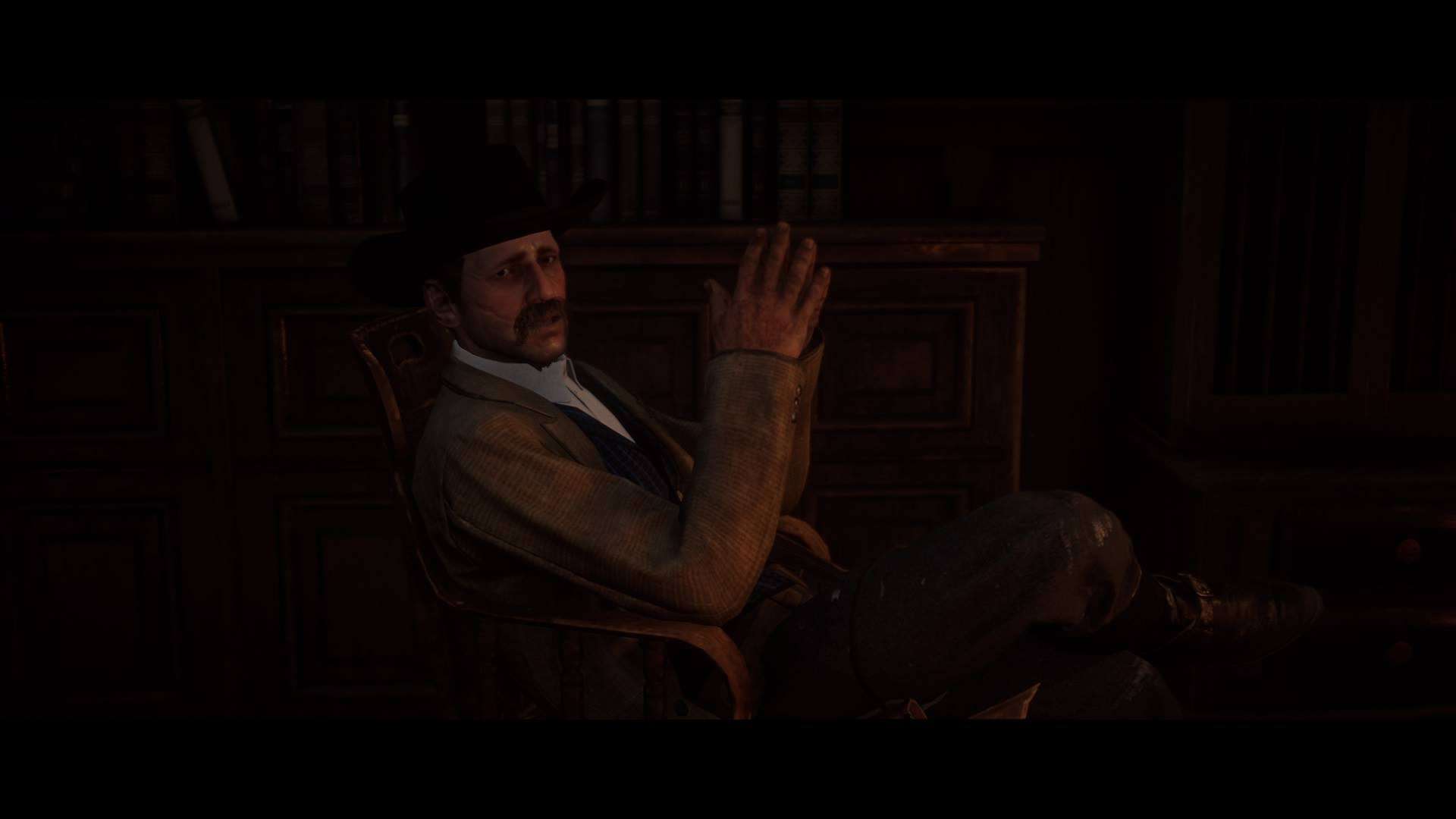 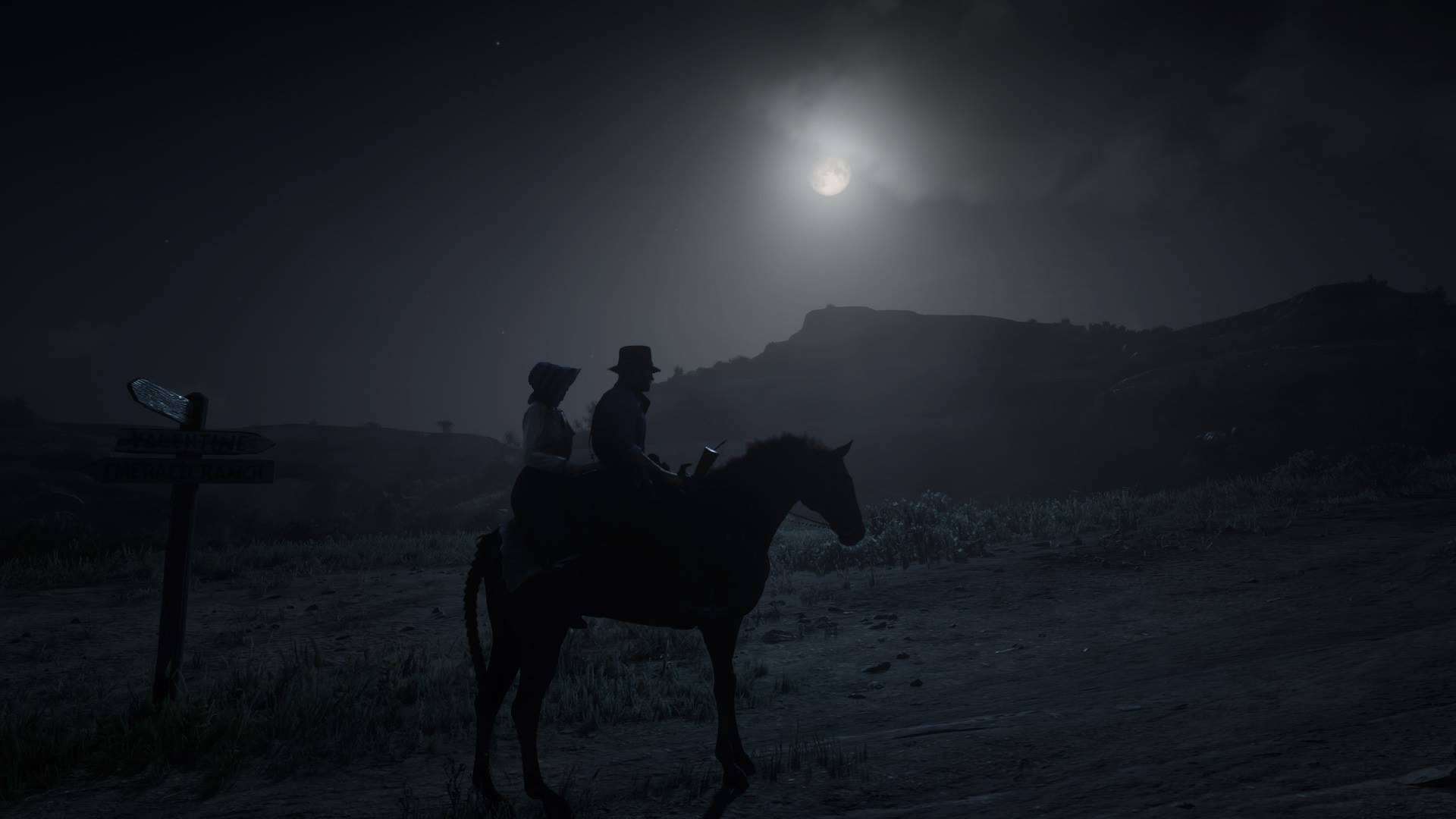 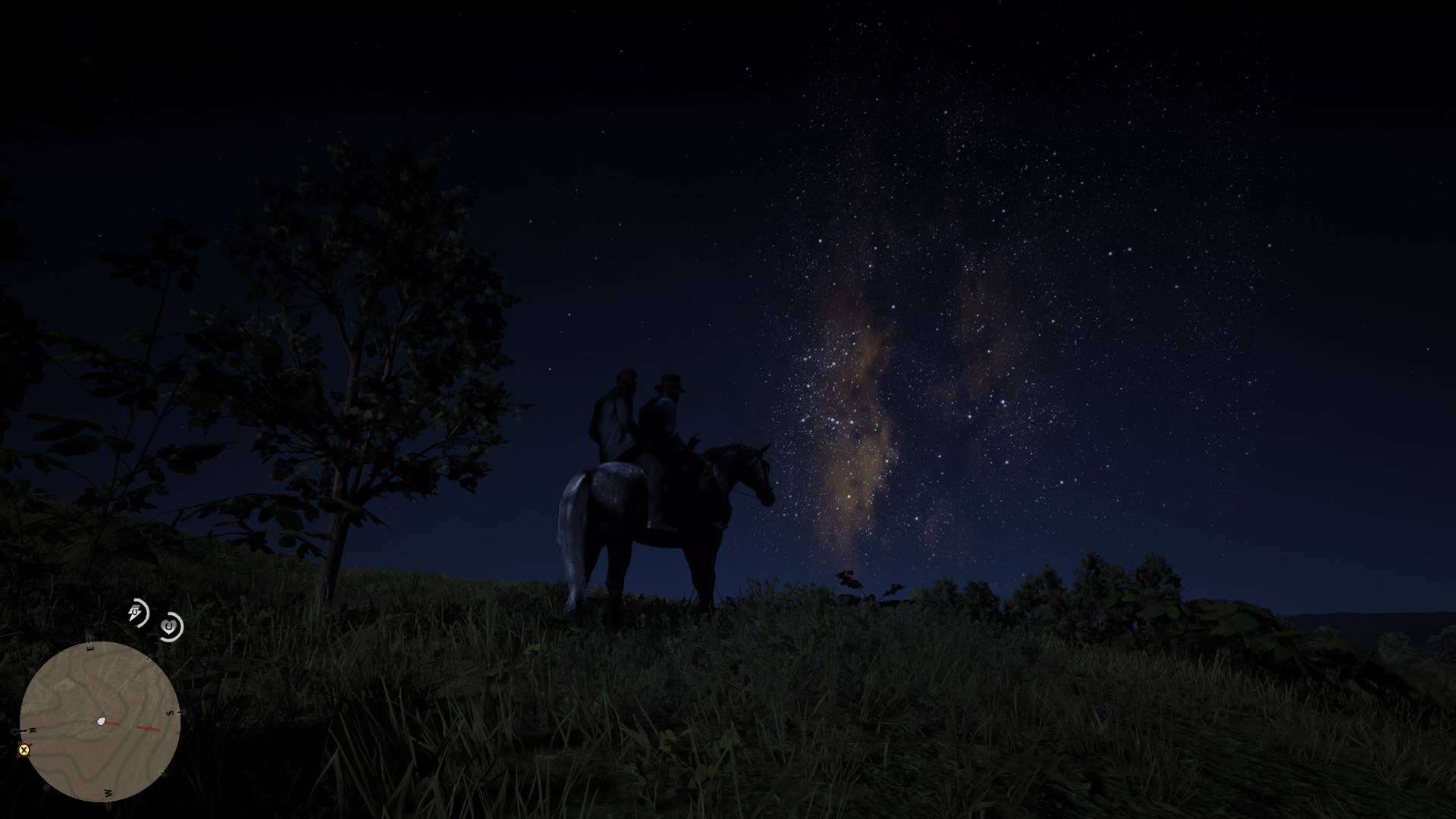 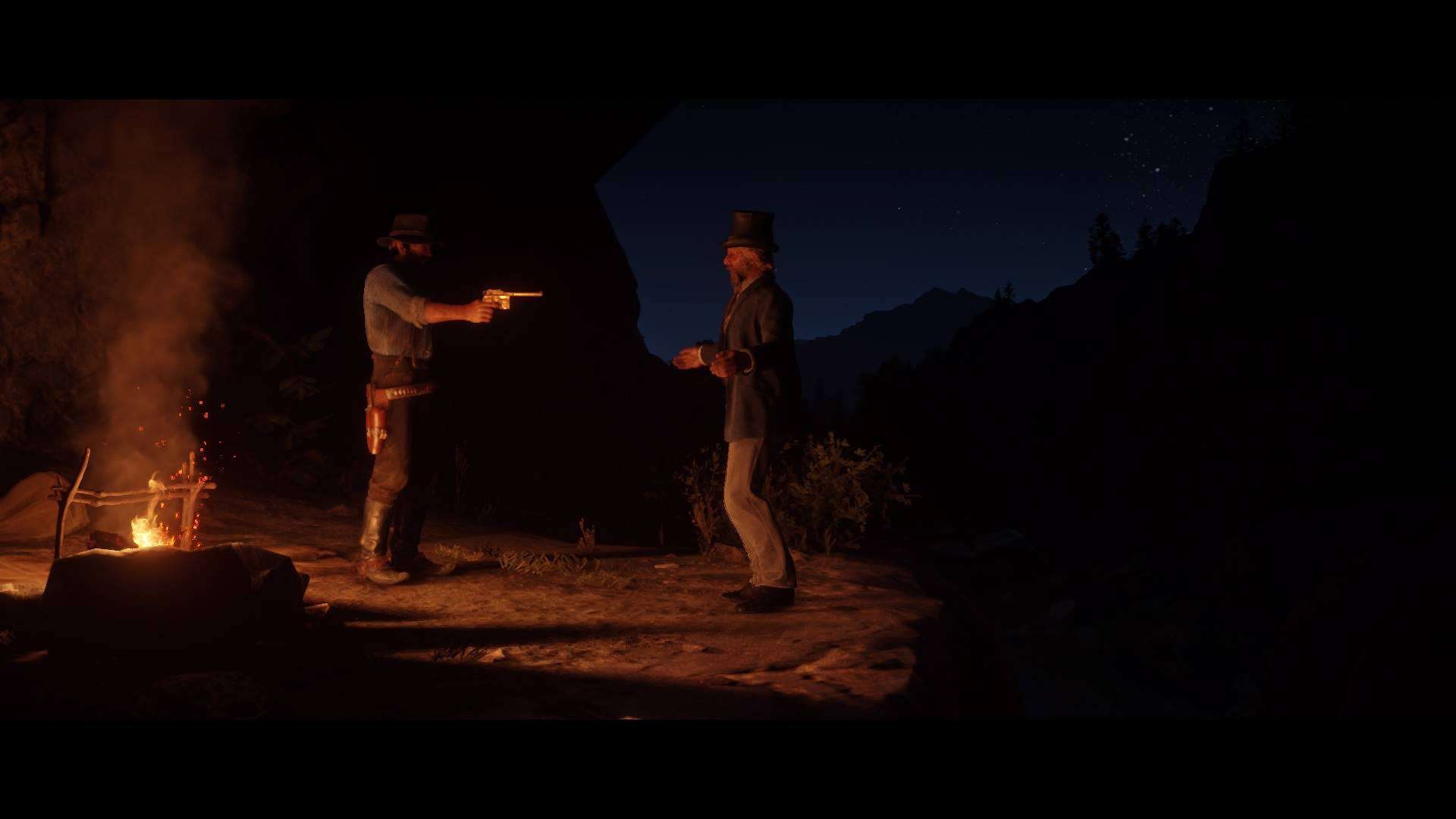 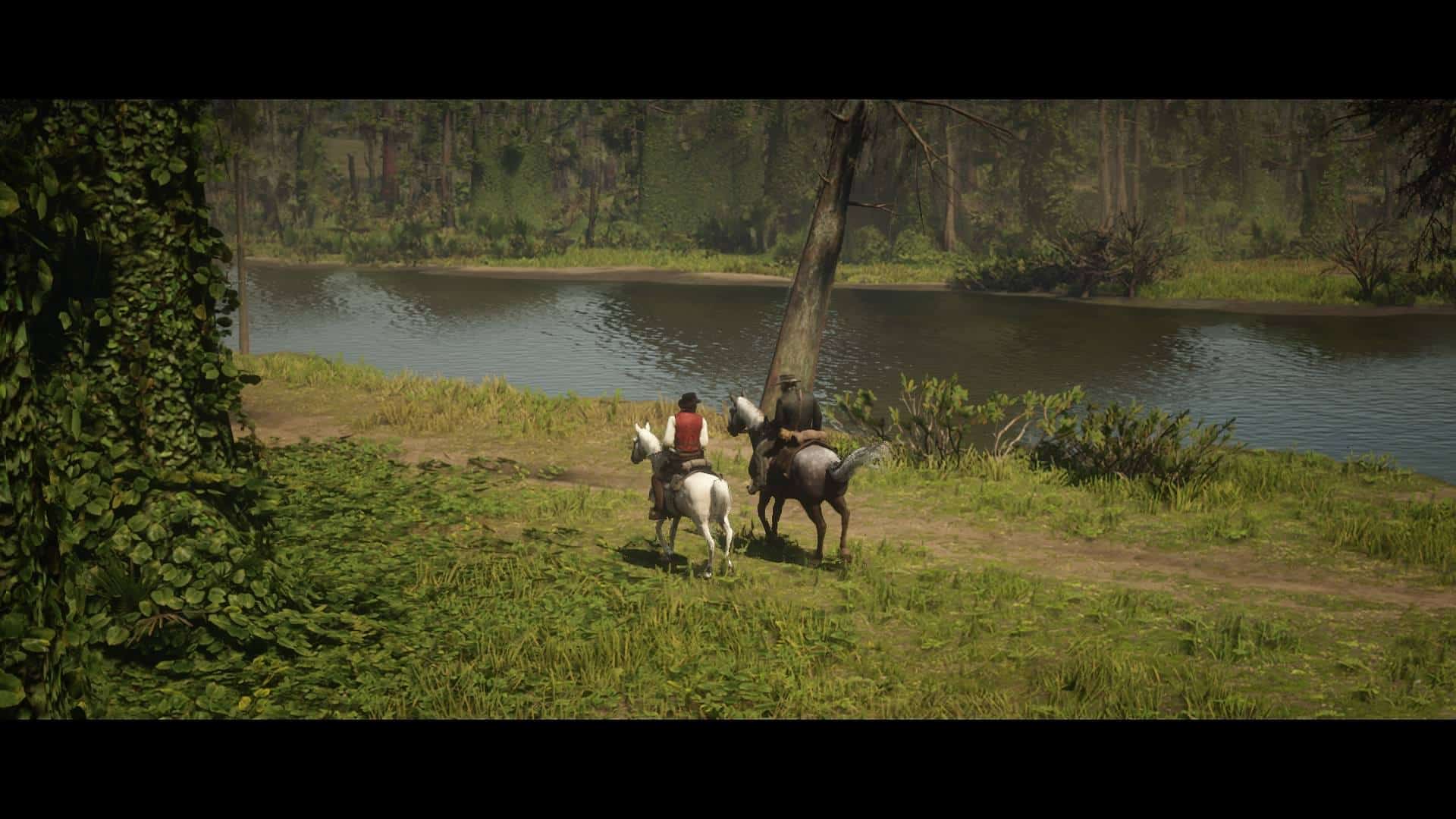 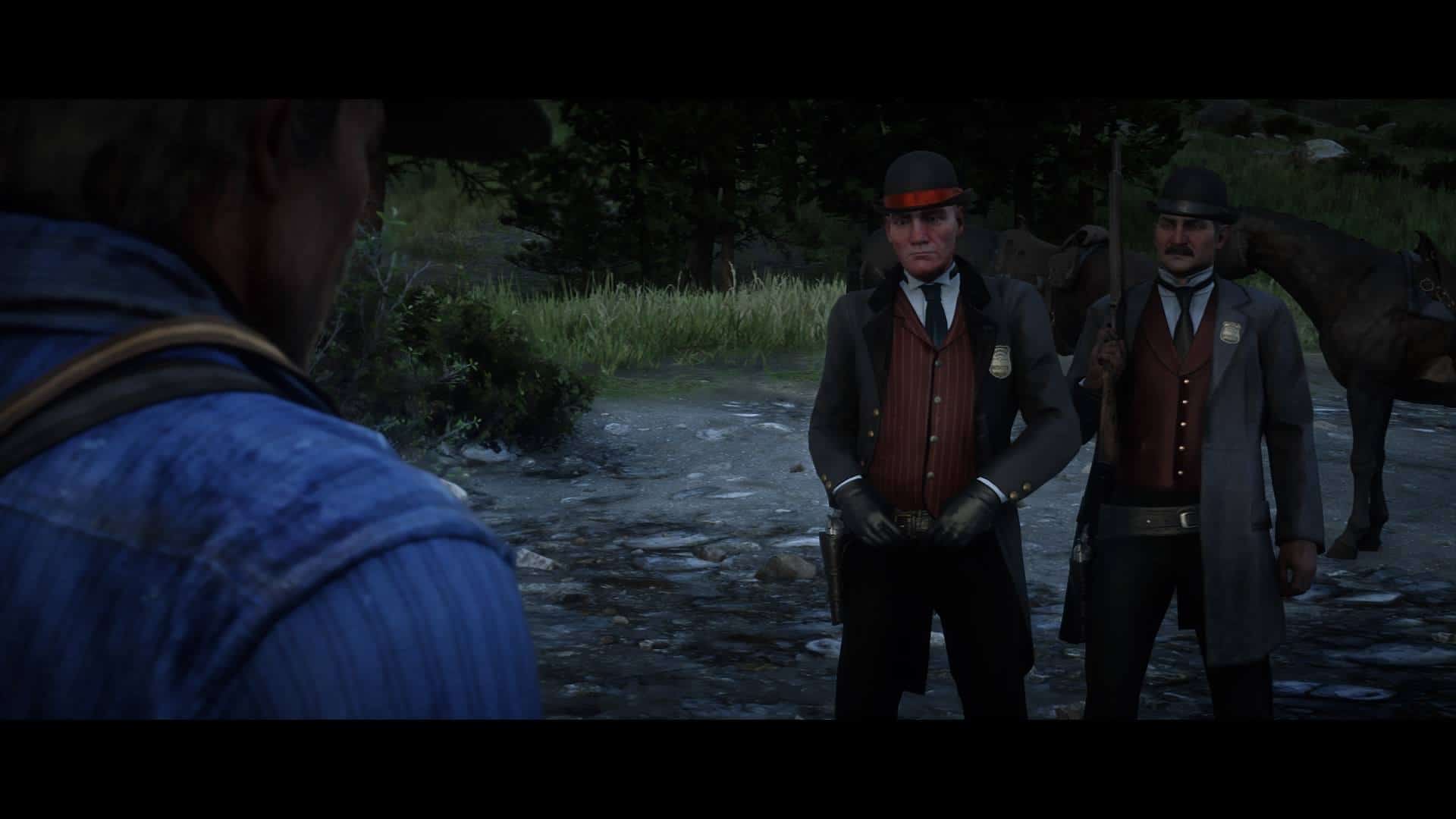 As you can tell, there is much praise to be given to Rockstar Games for their work on Red Dead Redemption 2. However, no game is without flaws… and Red Dead 2 sure does have some. The most glaring is the pace; the first 10 hours of the game feels like dragging a large boulder through mud. Movement is slow, fast travel is extremely restricted (and not available until much later in the game), and the plot moves at a glacial pace. Even after 20 hours, there were still tutorials popping up on-screen – a sure fire sign I was still in the “early” parts of the game.

Horse handling can be problematic at times, with your steed running headlong into trees if you aren’t careful. My first horse I began to bond with, Chuckie, decided to fling himself off a cliff while I transitioned into Cinematic Mode during a long ride – a hilariously ill-timed blunder that I am so glad I was able to witness. Another one of my horses, Titan, decided to trot himself right in front of me as I was squaring off against some bandits and copped a shotgun blast to the head. They will be missed.

Lastly, the overall control layout can get you into some real trouble if you aren’t careful. Interacting with townsfolk is bound to the L2 button, which also serves as your aim button. Try and speak to someone while still having a weapon drawn will see you aim your sidearm right at their head – and you can bet your bottom dollar the lawmen will be after you in a matter of seconds for “disturbing the peace”. One simple accidental threat turned into a 10 kilometer police chase and a $1000 bounty on my head… and all I wanted to do was sell some fresh animal pelts.

Rockstar Games have a track record for delivering innovative and insanely successful titles over the years. The shadow of Grand Theft Auto V looms large even 5 years after release. Red Dead Redemption 2 more than earns its place at the top of the open-world game pantheon, and brings an entirely new meaning to the phrase “immersive gameplay”.

An insane level of detail, engaging systems, lovable characters, and a compelling plot are what keeps this train running, and I believe Red Dead Redemption 2 will be remembered for years to come as one of the pinnacles of gaming achievements. I love this game, you’ll probably love this game, and with Red Dead Online coming soon it really has only just begun.