Ashen Review – A light in these dark times

If you know me, you know I detest and often protest against the use of “Soulslike” or “Soulsborne” as a descriptor of a genre. Becoming a catch all phrase for a game with difficult combat meant that people used it for basically anything that presented even the slightest challenge. Unfortunately though I think I am going to have to eat my words and go back on my stance on this. The Dark Souls games changed gaming and since then have inspired many games. With an industry that is being overwhelmed with games in this new genre, you can point to Ashen and say, this is how you do it right.

Brought to us by Indie New Zealand team A44 this game caught our attention at PAX Australia 2017 and continued to wow me when I went hands on in 2018. Produced by Annapurna Interactive, a production company making a name for itself for having some top notch games, the game arrived very suddenly during The Game Awards this month when they pulled a Beyonce Lemonade on us and dropped without warning.

I won’t delve into the plot too much, as the world building and lore are part of the charm of Ashen. What you need to know is that you are in a world of darkness. Originally created when the Ashen, a bird like deity, perched upon the world and brought light. Eventually perishing it’s dying breaths brought life and power before the world was plunged into the dark. Now the Ashen is reborn and you and your group want to race to its side to protect it so that it is not drained of life and the world is plunged back into darkness. Unfortunately though there are plenty of vying forces that want to beat you there, as such your tale begins.

Gameplay wise this will feel familiar, light and heavy attack, dodging and shielding and a stamina  bar ever dwindling. Your refillable Crimson Gourd will offer you healing, as enemies die you will collect Scoria to level up but should you die you will loose it all and you will need to hike back to collect it. You will set out into this world on one main mission but over time will unlock multiple side missions that you’ll balance your time with as you yoyo out into the wilds and back to your home base, going a little further each time. You can travel and rest at Ritual Stones which will also respawn enemies, you know the basic steps to this dance. It is where A44 goes from here that has made the game so appealing.

It can be said that Dark Souls and it’s brethren are well known for their difficulty. The “Git Gud” meme was born from newcomers struggling with the difficulty curve. I personally have always loved the challenge and reward of the Soulsborne titles but Ashen has alternatively chosen to make an easier learning curve. Thus making the game immediately more approachable to first time players. Every mistake you make is your fault, and you can think on what you need to do better next time. This is a blessing and a curse, while new players will love the slightly more forgiving gameplay the Soulsborne fanatics may find it a little easy for awhile as you head towards the more challenging end game content. There is a much more difficult version of the game that becomes available from the main menu but you do need to play a little further into the game to unlock that. Personally I prefer this but I can see the reverse side of this argument.

Probably one of the biggest draw cards for this game is the art direction the game has chosen. It cannot be ignored that the game looks beautiful, from character models to the landscape it all has a softly washed out colour pallet in the starting areas to a warm rich pallet in later areas. Lighting is used amazing well, especially when delving into the darkest dungeons where a lantern is a must to be able to make it through the foreboding darkness. Rounding a corner and shinning lights on to one of the creatures in the dark is genuinely off putting.

Every single character I meet is a delight to take in, both enemies and NPCs. Removing the facial features of the character has instead meant that the characters use body language to tell you everything you need to know about them. When speaking to the team at PAX they said that the removal of the face was partially related to allowing the player to put a piece of themselves into their character they create.

There is something exceedingly calming about the art direction, which is very surprising in the world that we are inhabiting which is not at all calming. This is only aided by a soothing soundtrack that knows how to amp up when is absolutely necessary to get your heart racing. All of this makes exploring the world they’ve created a joy to explore, with each area having a distinct feel whether it be the dank swamp fortress or the blizzard ridden ruins. 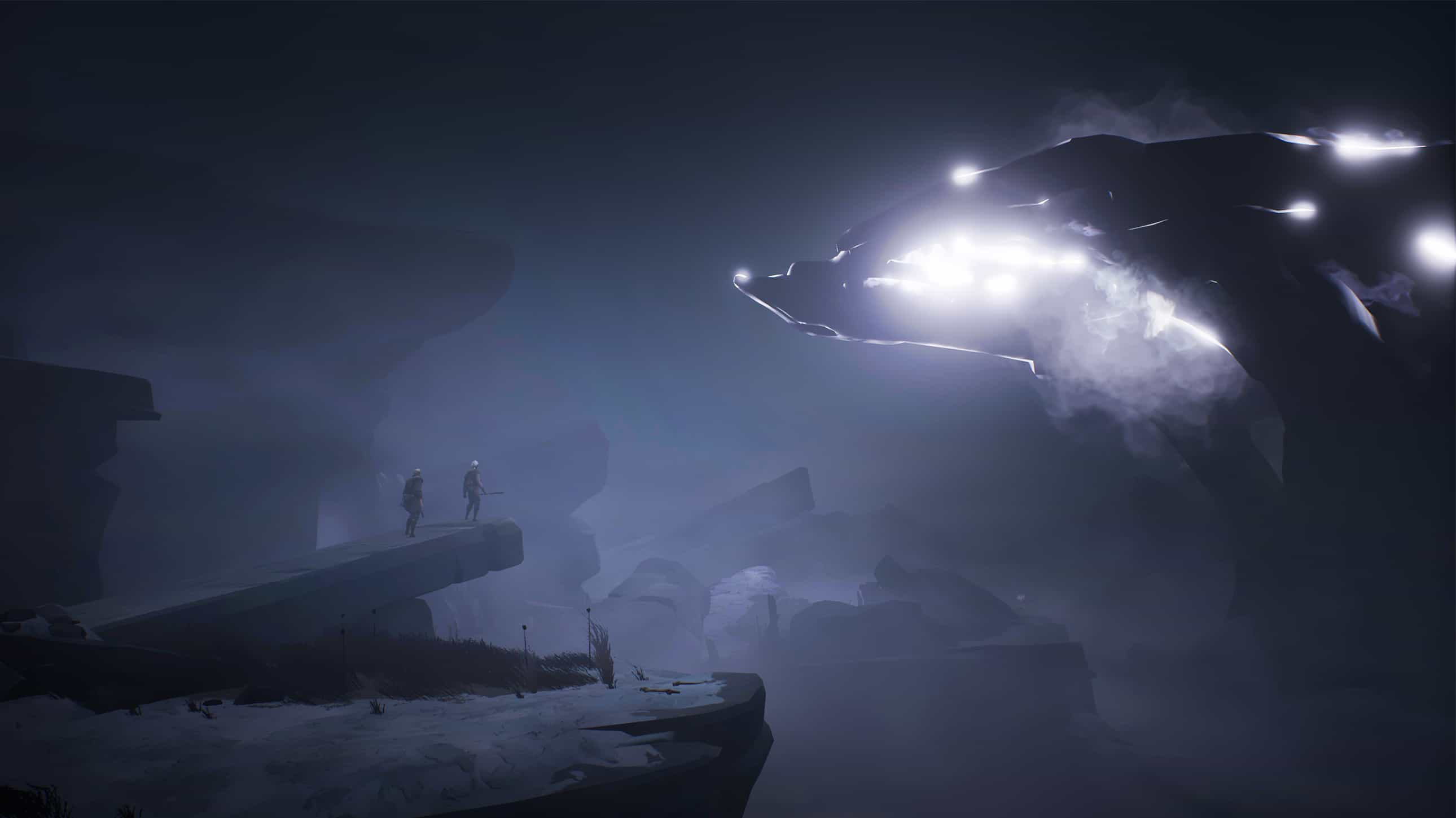 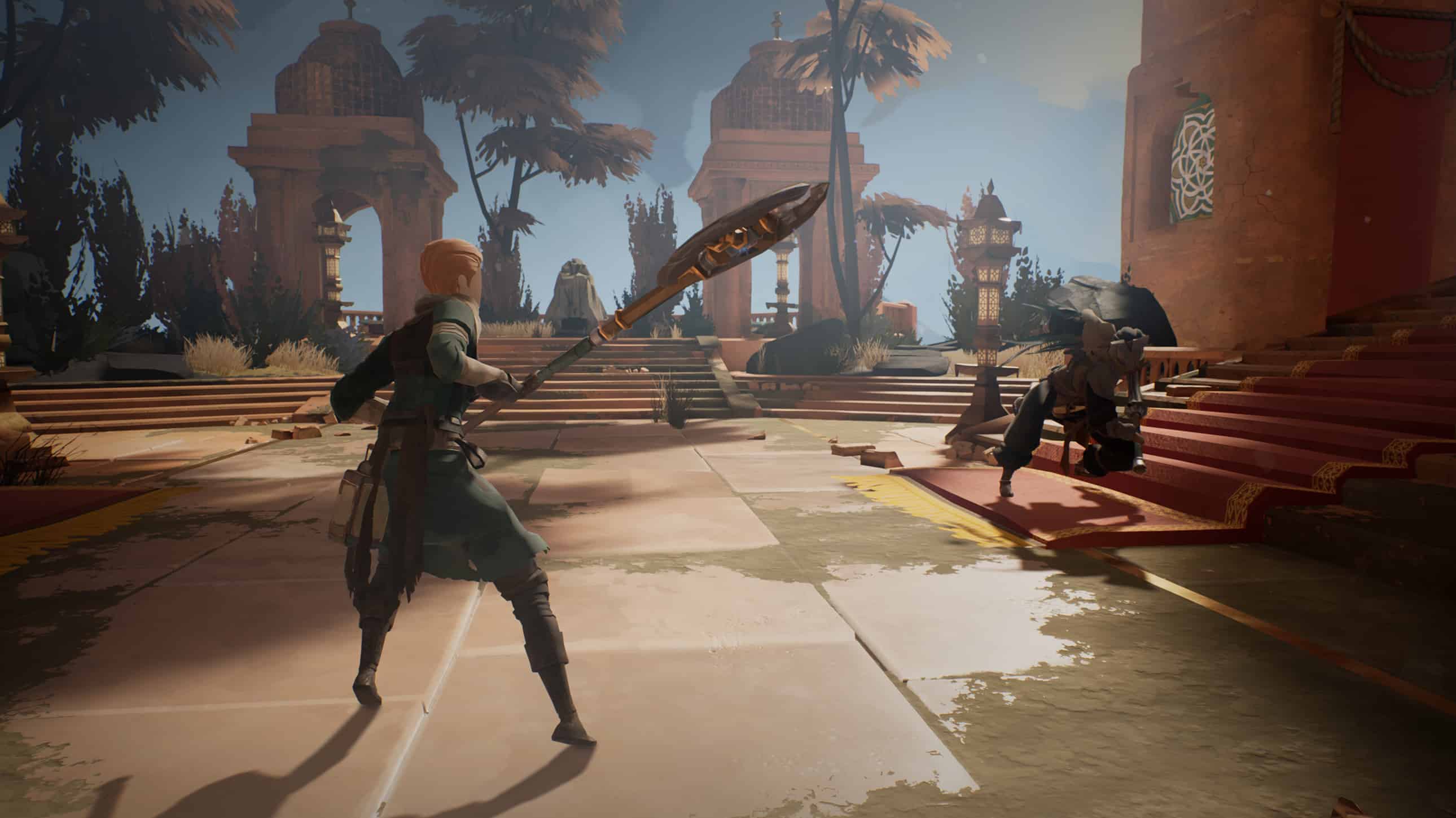 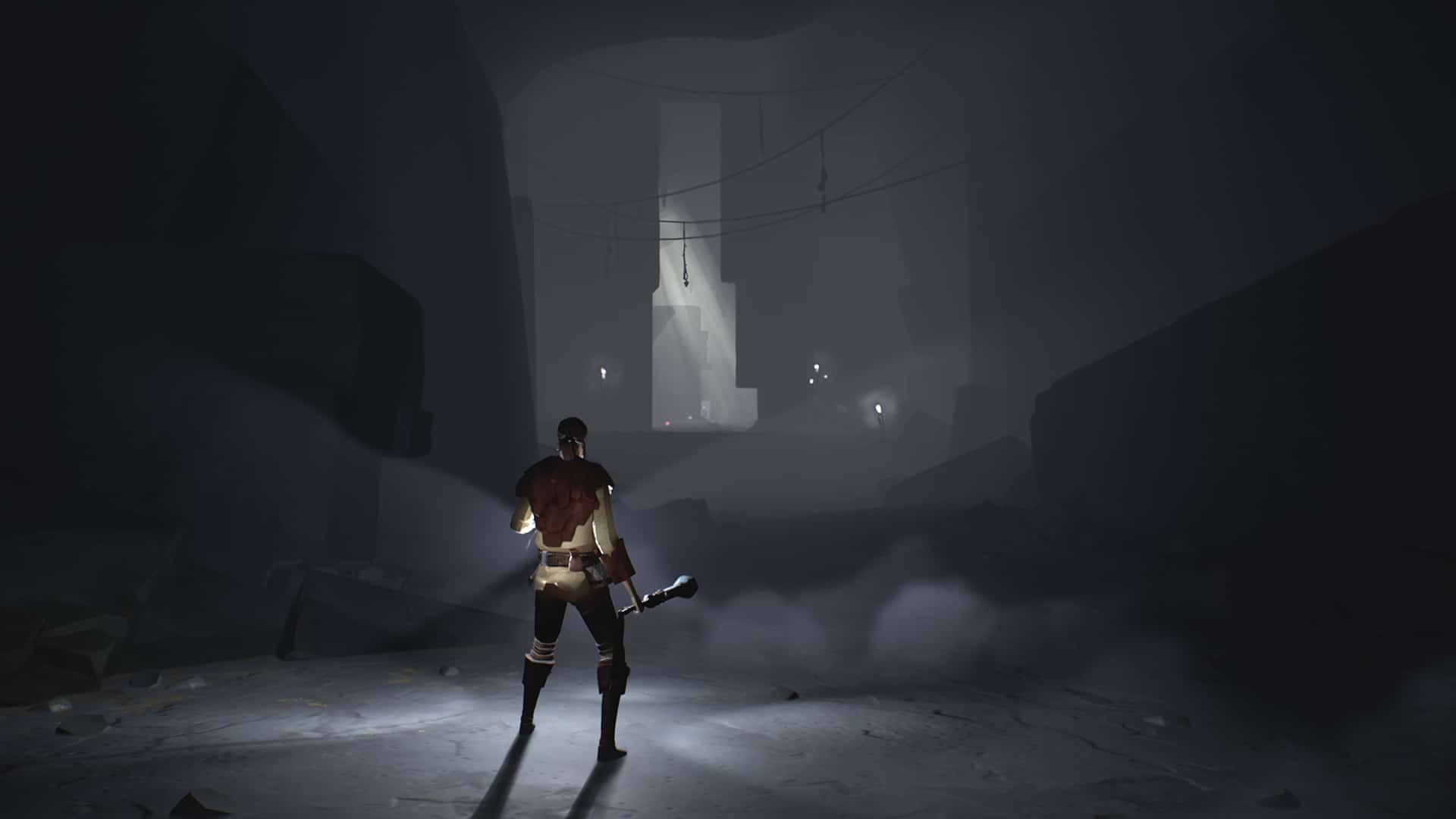 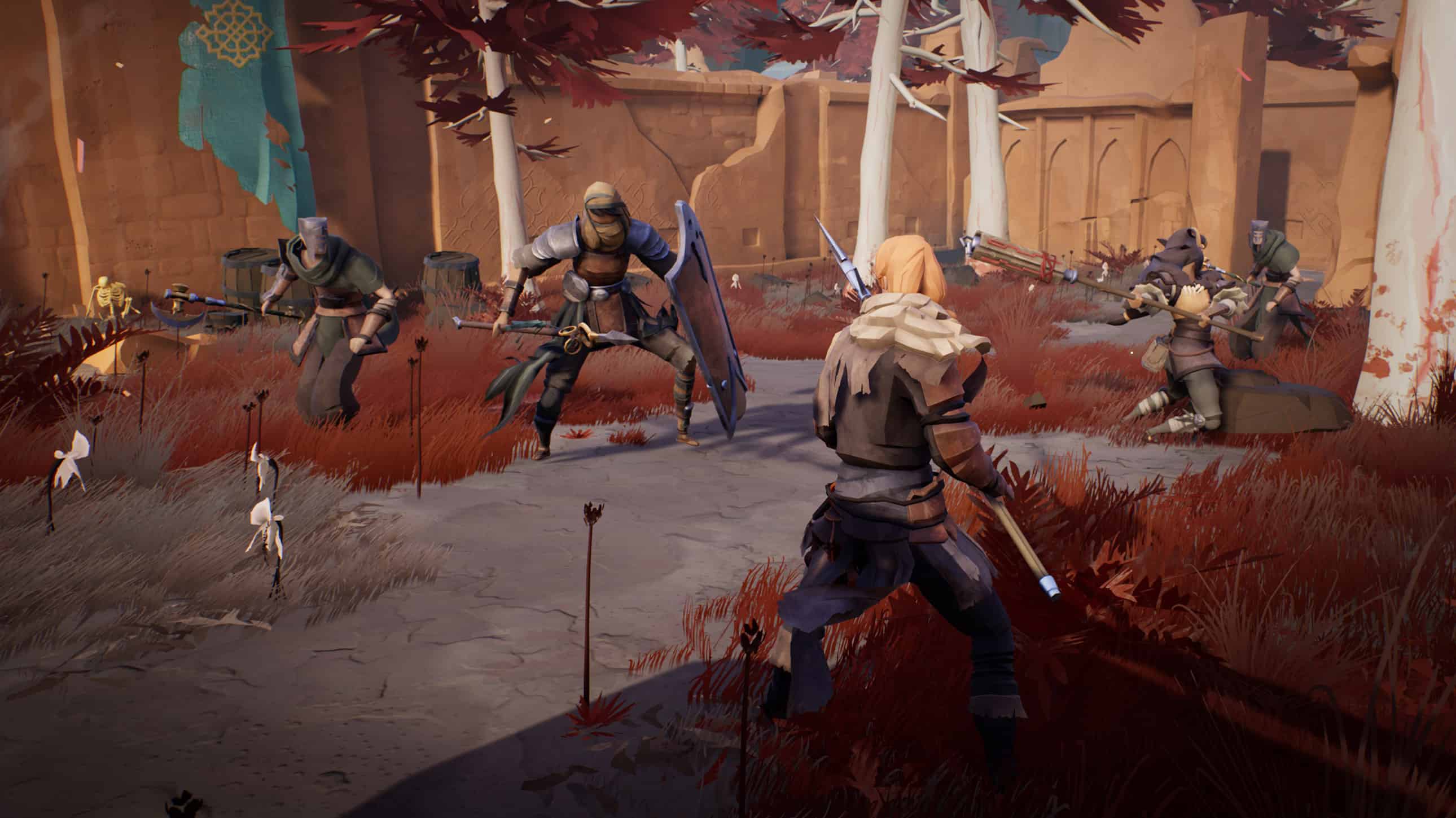 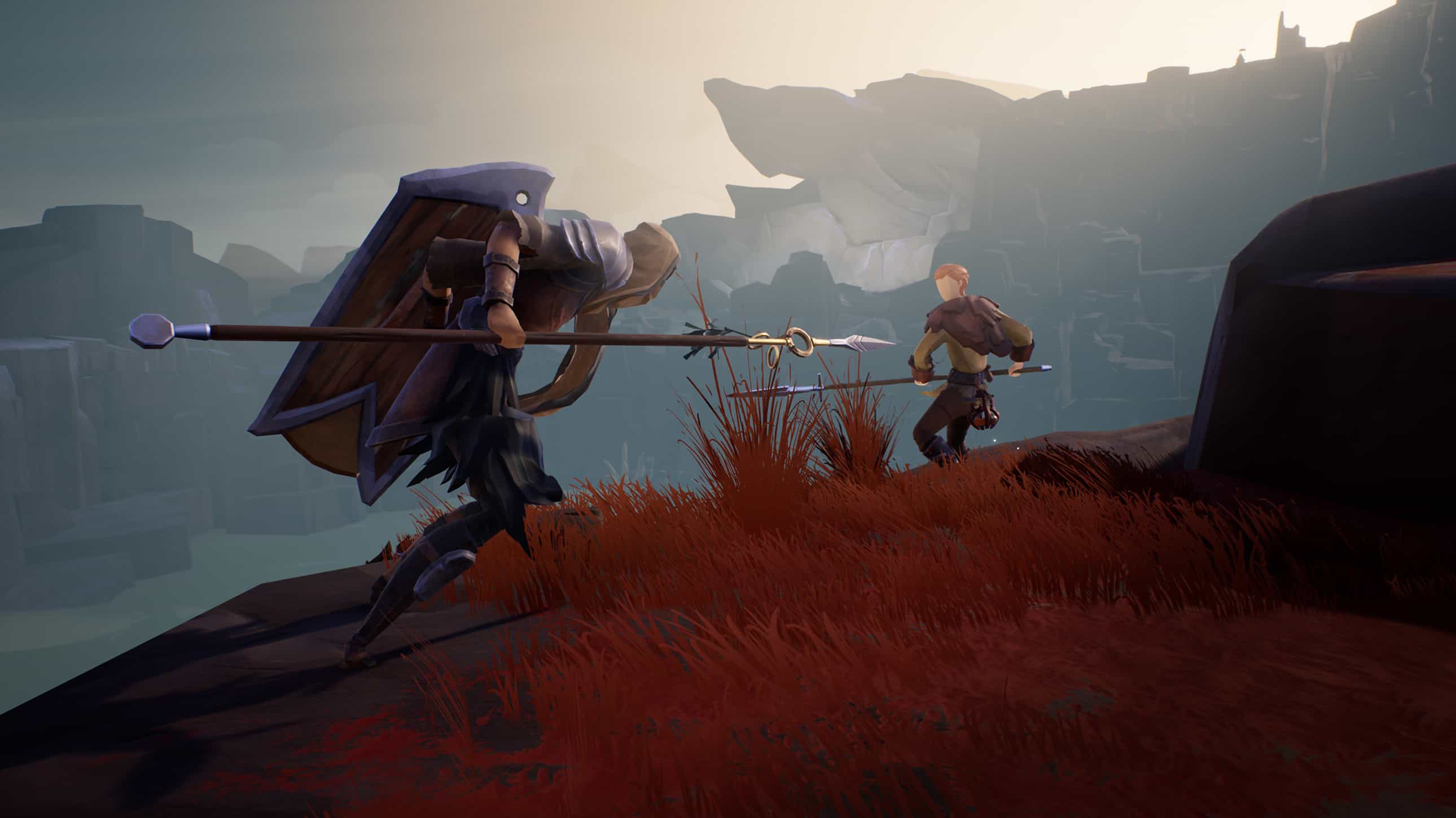 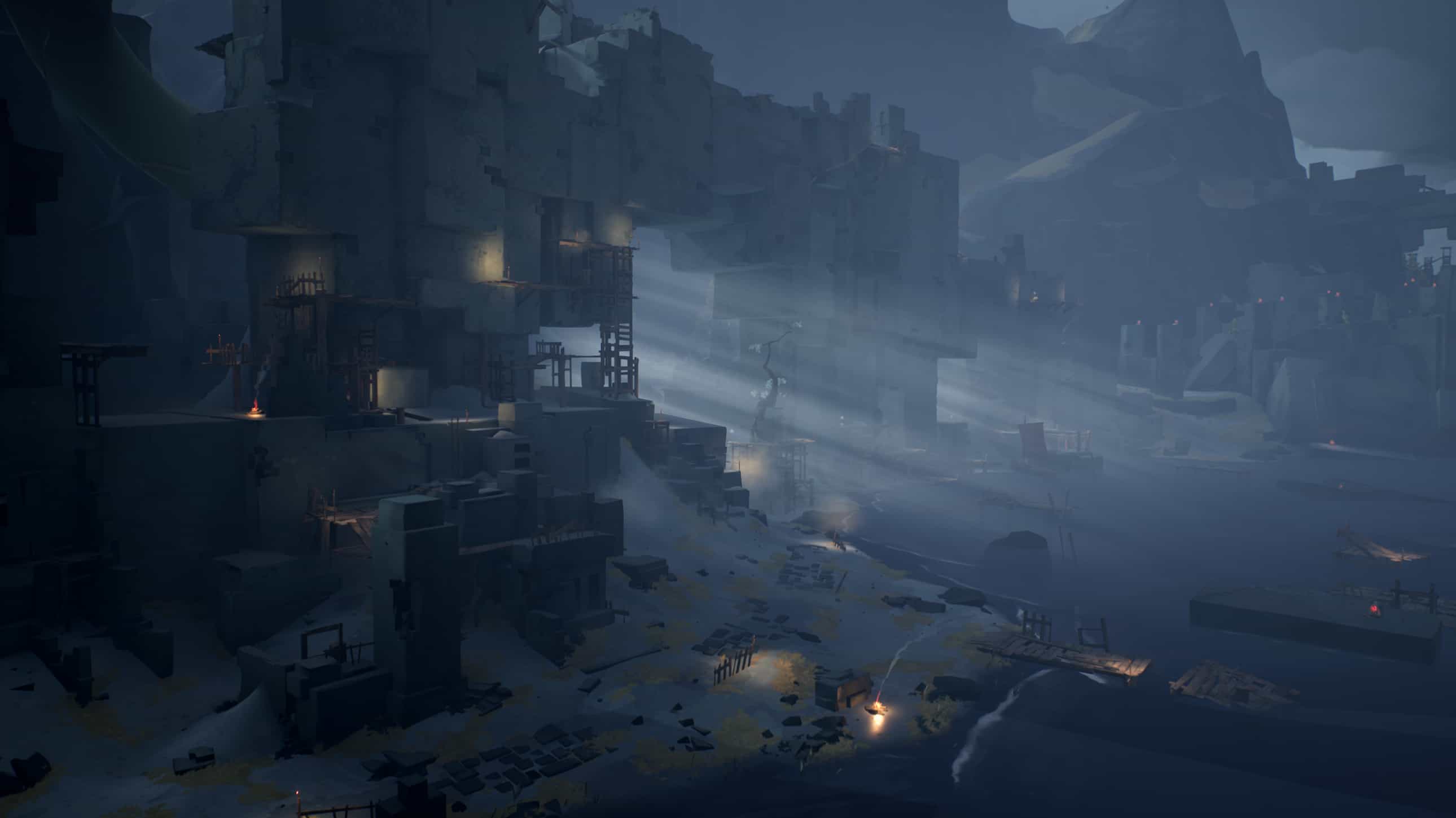 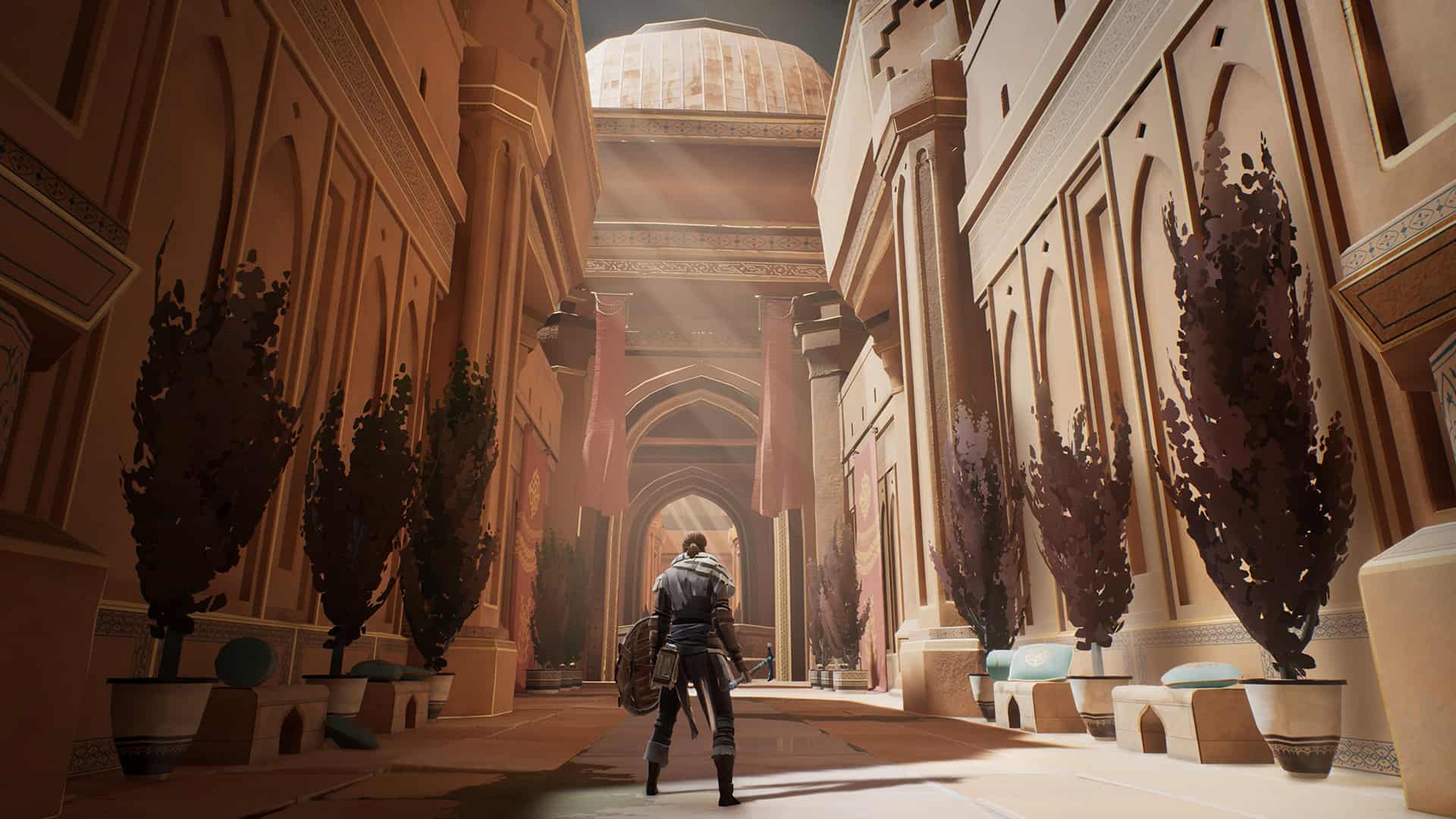 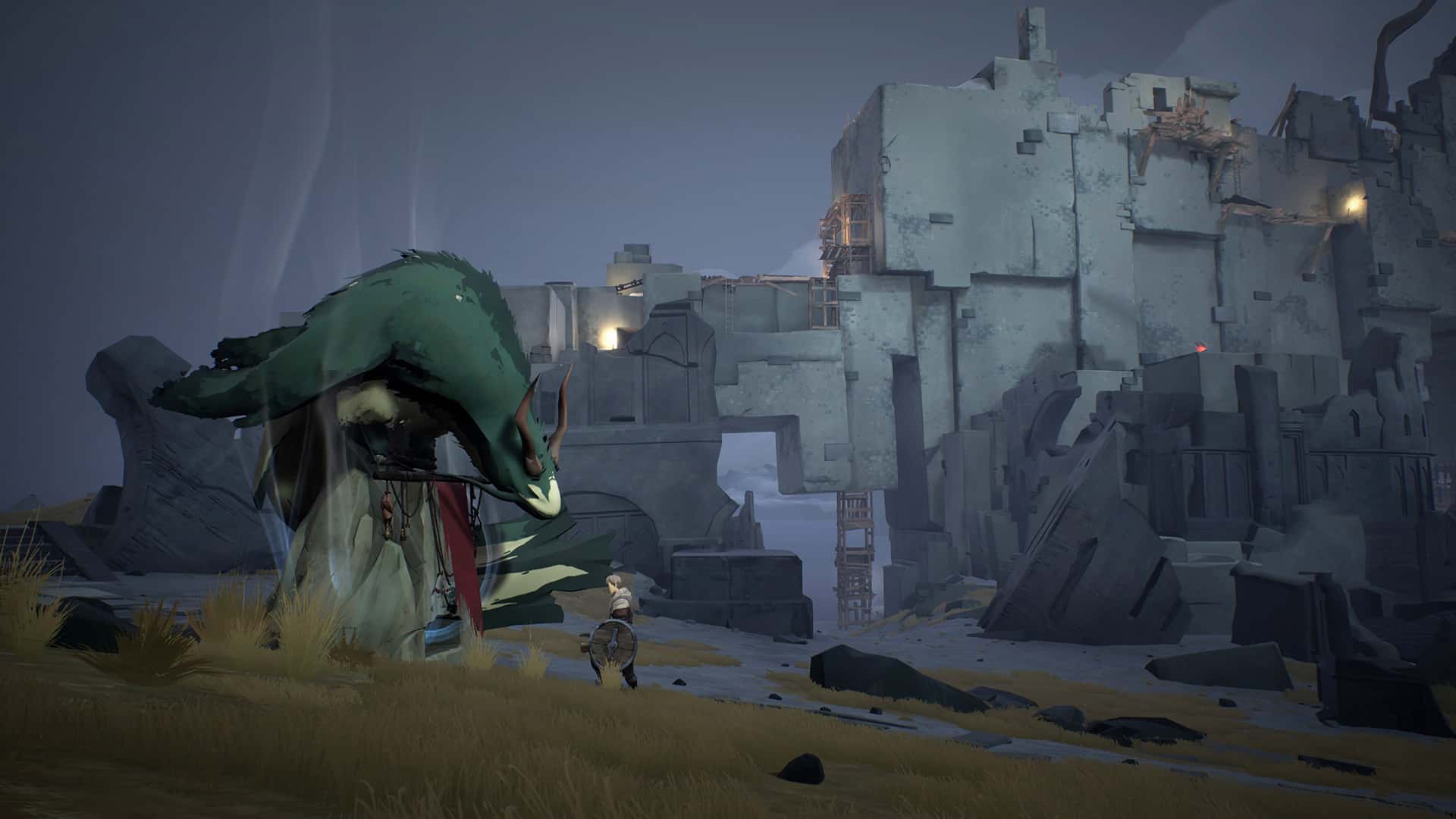 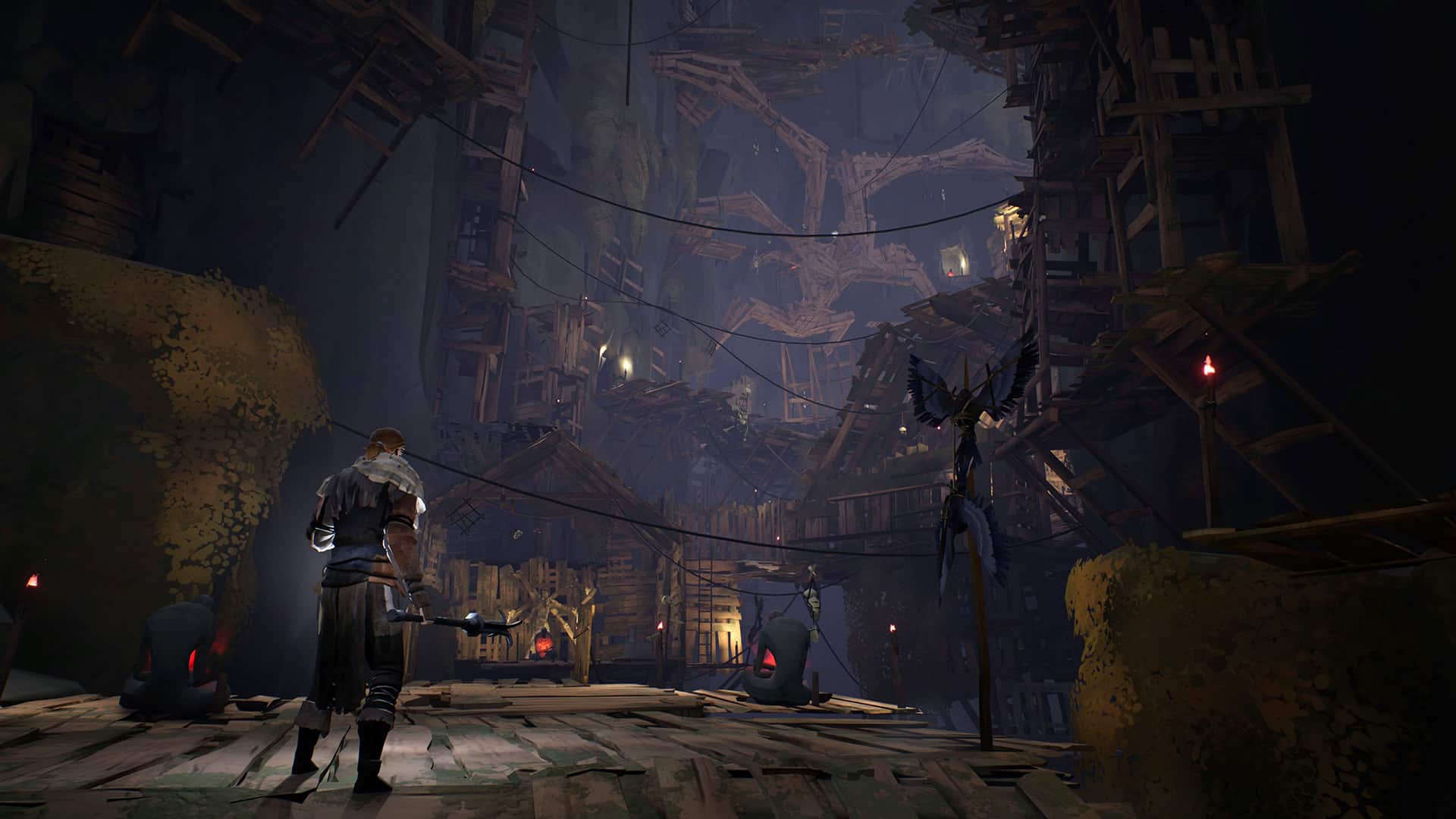 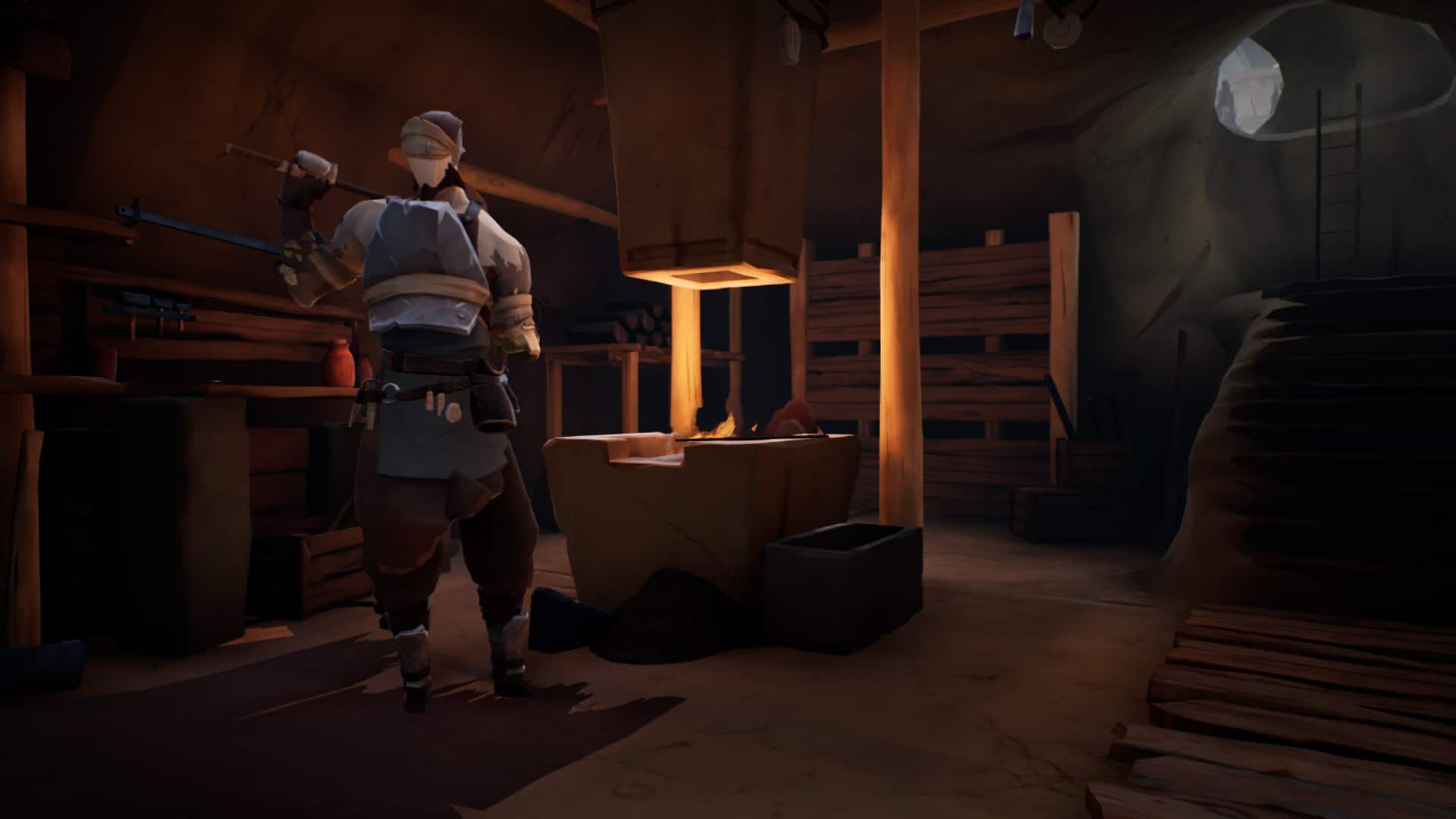 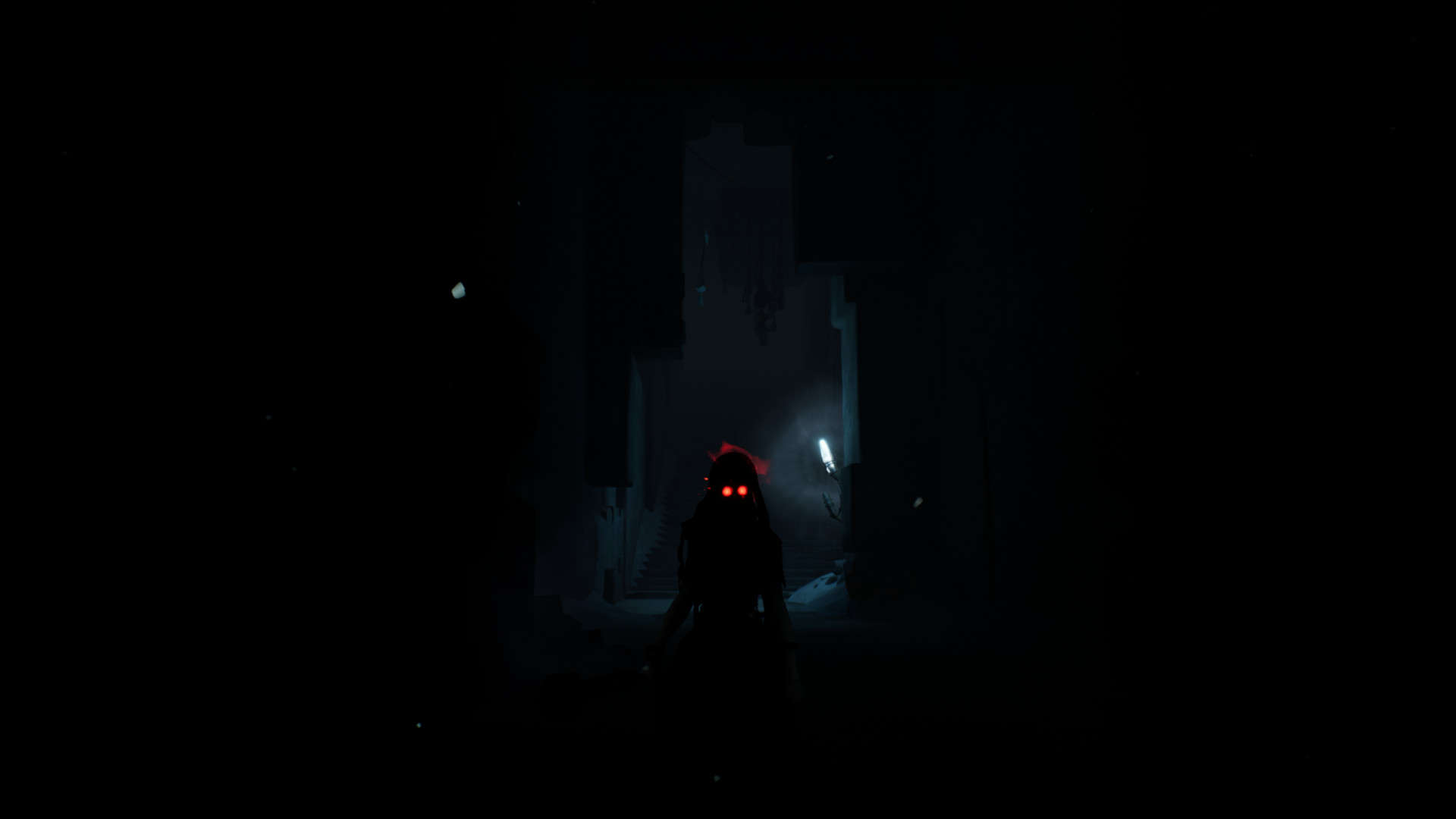 Exploring every nook and cranny of the world will open up secrets about how the world lives. It is this world that is another huge draw for me, the lore while still being mysterious is more intriguing to me then some of the Souls titles before them. The reality of this world is aided by your home hub, starting as a collection of tents the Vagrants Rest will slowly over time fill with NPCs you meet. However it isn’t just the people that will change but as the game progresses these character will construct buildings turning it into a bustling little town that is filled with character and charm.

“Without even realising it you’ll discover that your AI companion is behaving differently, it as this point that your CPU controlled friend has been supplanted by a real life player.”

This all adds to the sense that you are creating a safe haven, a community. This feeling extends beyond the town though. Selecting a mission and setting out into the world means that one of the NPC’s you’ve met will join you on your travels. This options can be turned off if you’re more of a lone wolf type and after a little while you’ll unlock an ability that lets you open the dungeons that require two players. You’re NPC companion will usually jump into the middle of battle and can at times have some questionable AI, however that is where Ashen’s passive multiplayer comes in to assist.

Without even realising it you’ll discover that your AI companion is behaving differently, it as this point that your CPU controlled friend has been supplanted by a real life player. In a similar vain to Journey, Ashen features a multiplayer mode that doesn’t acknowledge the other player is there. No usernames or lobbies, instead you will slip in and out of each other lives behind the visage of the NPCs, meaning your character you created is always just for you.

While to you they appear as your chosen companion in their world the places are switched and you will be puppeteering their conscripted traveler. You are able to enter a code that your friends can also enter to make sure you match up but honestly the silent acknowledgment between you and this anonymous pilot that you’re attempting to achieve a similar goal made the experience that much more enjoyable to me. It removed the pressure of not knowing the other person but provided the comfort of knowing someone was watching your back.

To be honest I never experienced any trolling and I kind of love that moment that you and another player look at each other and try to resolve if it is a person on the other side or just a collection of 1’s and 0’s. That being said shout out to the one person that did an entire dungeon run with me to peace out outside the final boss room, cool move. On the flip side major props to the person that fully solo wiped a room of enemies that had descended on me without warning and saved my bacon.

Pacing can feel a little slow at the start but as you go Ashen rewards you for exploring, heading off the beaten track and spending way to long on how to reach that ledge that has an obvious item on it. Thankfully once you open up your delightful quick travel friend, who is a very good boy, you’ll be able to easily dart around the map to explore all the different places and find mystical items that will help you upgrade your character to better handle later battles.

Ashen isn’t reinventing the wheel, I don’t believe it ever intended to, what it is doing though is telling us a new story. Like I said before the industry is flooded with Soulslike games at the moment but not all of them find the balance of an interesting world and enjoyable gameplay.

If you’ve always wanted to try out the genre but felt the Souls series was impenetrable due to its unforgiving attitude towards new players than Ashen is a fantastic place to start. A gorgeous art style and interesting world that isn’t over populated with unnecessary lore means that this is a game that you can easily pick up and play. Add to this a multiplayer model that isn’t about griefing others and you have an inviting experience that I certainly recommend.