That’s not cricket, or is it? Ah yes, cricket. An Aussie institution, chances are at some point in your life you have played some variation of cricket. It is undeniably the backyard BBQ sport of choice, classic bat and ball fun. Hitting balls over the neighbours fence and having to go and get them back, the classic unfairness of adults vs children. But ultimately, playing it is one thing and watching it is something else. Although there are those that can spend a day at the park with a cooler watching over after over, for others it is about as interesting as watching paint dry.

There have been cricket games over the years, Brian Lara’s Cricket is the first that comes to mind. But ultimately the reality is that cricket itself is not the most exciting sport in the world to watch, as such it’s hard to get excited about playing it as a videogame. But hey, developers have found ways to spice up golf and now its crickets turn. Melbourne developers Big Ant Studios have tried to make cricket exciting and fun, and with Big Bash Boom they just may have succeeded.

I honestly can’t fault the production values of Big Bash Boom. Right from the first menu you are hit with blasting power pop courtesy of a licensed soundtrack and a choice between KFC Big Bash League or Rebel Sport Woman’s Big Bash League, complete with official sponsors, of course. The vibrancy of the menus flows through the rest of the game, full of bright colours, flash and pizzaz.

Hitting sixes triggers team specific cricket ball (or pie, or tennis ball if you are into that kinda thing) effects followed by some pyro and another dose of that delicious power pop. Players on a roll trigger power ups featuring Dragon Ball Z type kamehame intro’s that range from setting the pitch on fire so the batters can’t run, to a skyward cricket bat allowing fielders to leap into the air like superman to make catches. To add to the fun there are loads of unlockables that can be bought with coins from your matches. Including victory dances and customisable outfits, yes you could play as a team of mascots if you so desired.

The game of cricket itself features all of the BBL and WBBL teams and their respective players. Somewhat stylised with larger heads and movement. This just adds to the fun nature of the game, a dose of fun that the sport itself generally lacks. With a cracking soundtrack and really top notch presentation in it’s corner, initial impressions are a game that’s heading in the right direction. But bells and whistles aside, what does it play like? Is it as fun as it looks?

The answer is a little column A and a little column B because whilst amping up the action and fun, the gameplay itself has been simplified. No doubt to attract both cricket fans and more casual sports fans. With batting and bowling you have the choice of four different types of delivery or swings. Then as is standard for bat and ball games it’s a matter of pressing the button again at the right time for the perfect swing or bowl. It would appear that in practice this is somewhat of a paper scissors rock game. You can control the direction in which you hit the ball (which is highly recommended because you WILL get caught out) which is essential. But ultimately it is pretty basic which doesn’t necessarily equal exciting.

I’ll be honest, I lost pretty much every single game I played against the AI. It may partly be that really I just don’t know much about cricket bowling and it’s not as self explanatory as one would think. They do try to indicate the type by the symbol in game but because of where the camera is (way behind the bowler when long bowling) by the time it gets down the other end you cant really see what it’s doing. So for me it became heavily trial and error. As for catching, should the ball be anywhere near a fielder you have a quick time event style mechanic to catch the ball. Ultimately though, Big Bash Boom is focused on the pitcher and the receiver.

As for batting, well anyone will tell you it’s always more fun to have a bat. In the single player game they get the camera angle right so it makes it easy to see what you are doing and even the most newbie player will be able to hit some sixes. The running is a bit buggy, ie; the characters may run in a different direction than they are facing but hey, I can forgive that. It is unfortunate though that the button to make a run coincides with one of the strike types, so missing the ball and accidentally running will guarantee losing a wicket. 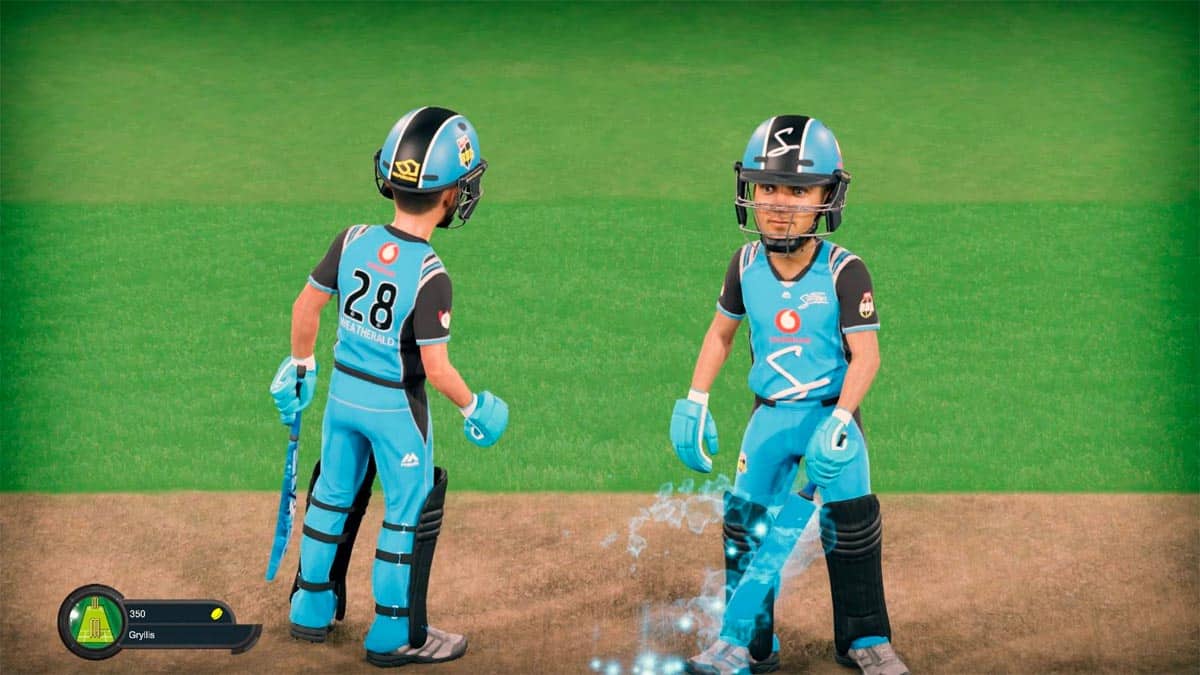 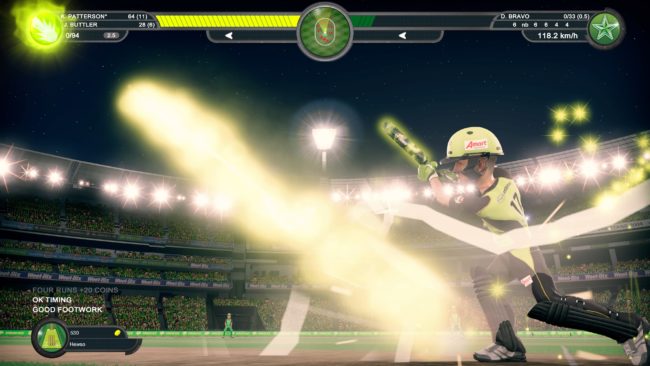 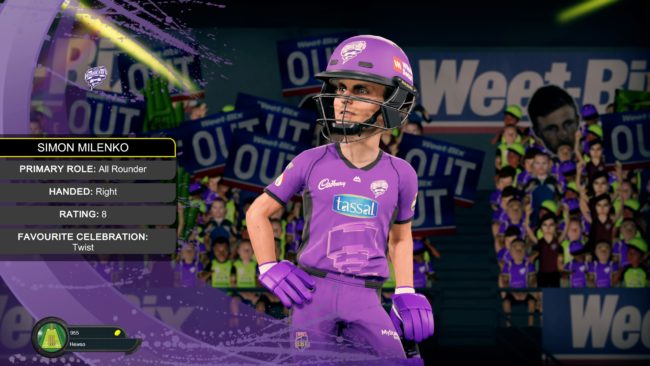 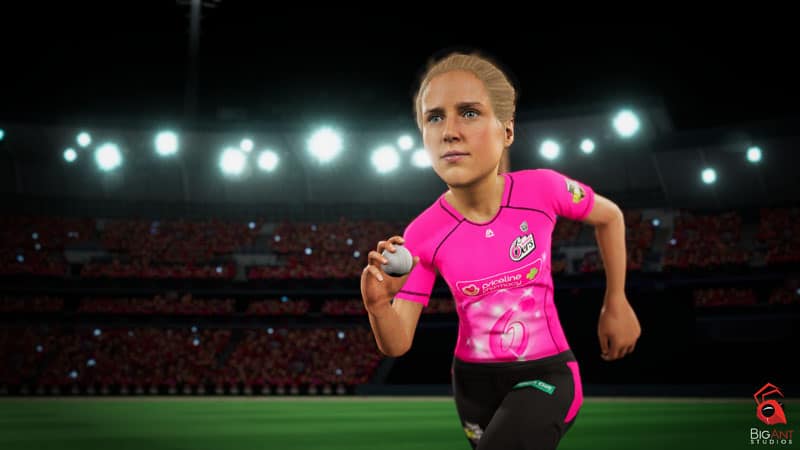 Couch play is available so you can take on a friend at home, I wondered how they would do this camera wise. Swap camera’s from fielder to batter between overs perhaps? Unfortunately not, in versus the camera is fixed behind the bowler. In my experience I thought this unfairly favoured the fielding team as it’s a little tricky to hit the ball when is hard to see it in motion. One of the things this game really could have done with is an adjustable camera as is standard in most sporting games. Or simply just fix it behind the batter, because ultimately fielding is set your target and a couple of button presses. Batting you need to gauge when to strike and what direction. Which is hard when facing toward yourself.

Camera gripes aside though, I definitely think that versus is where it’s at. Particularly for casual players who don’t get the nuances of cricket and find it hard to win against the AI. Other than some gameplay gripes the other thing Big Bash Boom could have done better is options; in sporting games it’s now standard to be able to mess with the rules. One option that would have been great is to play all the overs regardless, as once the second batting team matches your runs its game over. But of course, that wouldn’t be cricket.

I  enjoyed my time with Big Bash Boom, although by no means a perfect game it features exciting presentation and enough big bashing action to keep even the casual fan occupied.  It is just slightly let down by some gameplay niggles but they aren’t bad enough to totally ruin your experience.  It supports local sport and features both men and women’s big bash leagues which is definitely a credit to the game.  For even casual fans of local cricket I definitely think its worth giving it a try.