Back in 1994 when Sony was entering the market with PlayStation, arcade gameplay was king. To that end it partnered with one of the greatest players on the scene, Namco. The result was three new franchises being Tekken, Ridge Racer and Ace Combat. Ultimately all of these franchises found their way into gaming DNA in their respective fields. Ace Combat itself so far has 17 games under its wing, but only six main canon games with the last being released in 2007.

On the one hand, dog fighting games and war games are a dime a dozen. Generally though, air combat is a secondary aspect to a game based on something else. You can fly jets in GTA V and you can fly jets in Just Cause 4 alongside the other activities. So for the budding jet fighter pilot what does Ace Combat 7 : Skies Unknown have to offer? To be honest it is an acquired taste. It straddles the grey area in-between arcade action and simulation gameplay-wise, with a story that would make some RPGs proud.

Ace Combat 7 is set on a fictional earth detailing the war between the Osean Federation and the Kingdom of Erusea. It tells the story of spare squadron, essentially a band of court-martialed air force pilots. It is very suicide squad in tone and delivery. The story is told in between missions via extremely pretty CG sequences al la Tekken. Its delivery is very Namco, except rather than 30 second fights interrupting the story, you have sometimes 30 minute plus missions. The juxtaposition is both interesting but a little jarring at times.

As far as gameplay goes, air combat games face an interesting challenge, being that flying jet fighters I would imagine should be exciting. With car based racing games, the sensation of speed and motion is demonstrated by passing scenery. When it comes to planes it is more difficult; when you are in the sky despite travelling at Mach 2 there are no relative objects. Even enemy jets seem slow for example, because speed is relative. Ace Combat 7 is not an exception to this rule, the gameplay rather than being fast and exciting more often than not is a mix between thoughtful and strategic. I tried to scan the ground but the trees for example and buildings appear to be out of proportion in comparison to your plane.

When it comes to combat, a fair amount of the fighting can be frustrating. Trying to chase jets and drones that can manoeuvre  faster than you, it is hard to judge distance and height. There are sections where trying to chase multiple objects and targets when your team AI is pretty useless whilst a timer is counting down is just fair dinkum frustrating. There were a number of missions where my AI squad left me to down multiple bombers, too concerned with migs… and yet not getting them off my back whilst I was trying to achieve our TEAM goal.

The length of the missions are decent running into 20+ minutes on first try, but multiple deaths will expand that with no save during missions, despite checkpoints so you really have no option but to start from scratch. Which means, if dinner is ready unfortunately you cant get away with “just a few more minutes” like you would back in the day.

Ace Combat 7’s VR mode features its own mission-based campaign and free fly options. To be honest it is an absolutely exhilarating experience. From the moment you taxi to the runway and get the signal to go to the moment you overcook a manoeuvre and see the ground hurtling toward you. Pursuing bogies through the clouds and sky trying, trying to get a lock and watching as your missiles fly hoping they hit their target.

My first time in the sky gave me those same chills as the first time I played Mario 64 after spending my childhood with sprites – it is just that big of a leap forward. It is an absolute joy to be old enough to remember playing the first Ace Combat and now almost 25 years later, I’m flying the jet myself. I would go as far to say that if you have PSVR this game is an absolute must for this mode alone. 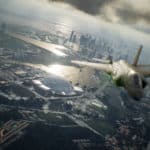 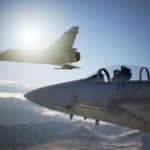 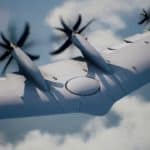 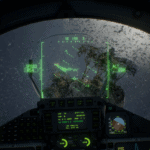 Ace Combat 7’s Japanese roots become very clear when it comes to gameplay. Your success will heavily depend on the weapons you choose, which can be tricky when it isn’t exactly clear what you will be facing on the field. Multi air-to-air missiles will sort out drones, but they wont be effective against bombers or will take multiple hits to take down jets. Long range air to air missiles will nail bombers but wont be useful against jets who will out-manoeuvre them. You get the idea. Ditto for ground targets. This requires planning and sadly trial and error. If you get 20mins into a mission with the wrong weapons its that age old story where you won’t get any further unless you restart and change your sortie.

However, I need to make this clear. These niggles are the exception rather than the rule and like many great video games, this is absolutely one about moments. That mission where you have your instrument fly through clouds avoiding radar then they clear and a city comes into view. The first time you come across the space elevator or a boss. Moments like these make the dog fighting and trial and error worthwhile. When you finally get past a frustrating mission you will be rewarded with more moments that await you. It is old school arcade gaming, pop your coin in and go again. Replay the level with a different set up. The reward is moments and the reward is story. Your determination to succeed will be rewarded.

Graphically, Ace Combat 7 nails the experience of flying through clouds, swap to cockpit view and you get the vibration, droplets over your canopy turning to ice and instrument warnings. Chasing or trying to shake a jet or missile through storm clouds is hands down awesome. So much so, that you may want to hop into free fly mode and check out the mission arenas in your own time. Try shooting a bomber at close range then fly straight through the smoke, flames and debris. This is just one of those moments where although you know the risk, you just want to do it because it’s awesome and risk a restart.

Control wise, you have yourself two options: normal and expert. Normal is basically, you push left and plane turns left. Expert, a push to the left will allow you to barrel roll, fly upside down if you want and really open up your options. My opinion is that this is the only way to fly – and don’t worry, it is separate to game difficulty so you can play with expert controls on easy should you wish. In fact, the expert control scheme is in line with modern games so if you have flown a plane in say GTA V this is the control scheme you know. I cant imagine trying to play the game in normal as it is like flying with a hand turned behind your back especially when you have a bogey on your six just waiting to send a heat seeking missile where the sun don’t shine.

Ace Combat 7 is a difficult beast, it won’t please gamers that want a quick thrill. Despite its cover, name and the fact it has a range of fighter jets at your disposable it isn’t really an action game. It won’t please a gamer looking for a flight sim because there is equal measures story action and its just not realistic enough to fall into that category. The gamer that will enjoy this needs to enjoy arcade style challenge, the patience to try again, be interested in narrative and the ability to accept that you need to earn your thrills and you need to be open-minded about where you will find them. Ace Combat 7 wont appeal to everybody despite its topic of choice. But for the few where those interests collide, it is fantastic.

I rate this game, it is a somewhat eccentric mix of arcade and sim with lengthy story sequences for good measure. It is at times terribly frustrating but it also rewards that determination with moments that will make all the time and effort worthwhile. Ace Combat 7 : Skies Unknown has heart and that’s a compliment that not too many games receive these days. The VR mode is absolutely fantastic and an experience in itself, you will not forget your first time in the sky guaranteed. For fans of the series, definitely a must have and ditto for owners of PSVR. For everyone else, if you have the required patience and even a passing interest in air combat, it’s definitely worth a try you may be surprised.

Sega Fanboy and Retro Enthusiast. When not working Kolby can generally be found gaming, watching Anime or listening to Japanese Rock Music.