Resident Evil 2 is an interesting hybrid, combining the best ingredients of the series past, mixing them together and baking a delicious, violent, scary cake in 2019. It’s a remake, yes, but unlike any Resident Evil remake or remaster that has come before it. Resident Evil 2 combines the story of the original RE2, the over-the-shoulder gameplay that first found its success in Resident Evil 4 and the graphics engine that spooked us all in Resident Evil 7.

Let me start off by making it clear that I am a huge fan of Resident Evil. My earliest horror memory involves attempting to play it when I was around 10 years old, being too scared to pick up a controller after those iconic dogs jumped through the windows in the original. I have played every one since, tried the Gamecube reboots, experienced the HD collection – I even have a fondness for “spin-offs” like Code Veronica and the episodic Revelations.

Picking either Leon or Claire, both of whom take similar paths through the main narrative but encounter different characters and enemies throughout, you try to survive the zombie outbreak while figuring out what the hell happened. Along with the core narrative, there are also unique perspectives on scenes where the two inevitably cross paths throughout the game. This takes a decently sized adventure and extends it significantly, changing just enough to make the familiar still feel challenging.

Straight away, it’s the visual upgrade that stands out, along with the shift of camera to the over-the-shoulder perspective that many modern games have used since RE4. Fixed camera may be “old-school”, but we’ve moved way past that, and the freedom of exploration that comes from running from area to area with doors that open instantly (instead of hiding a short loading screen behind them) is oh so sweet.

Exploring the Raccoon City Police Department in all its glory with this engine in Resident Evil 2 is a delight. The maze of different rooms has a distinct look which helps when it comes to memorising the map with its many locked doors and puzzling secrets. Small details such as the gory remains of the T-Virus outbreak linger in the dark hallways, with only the light of your torch flickering to see the violence.

Zombies look truly terrifying. Mouths hang from the side of their faces as they lumber towards you, different zombies claw at the windows with an eagerness to eat your face and the other monsters you encounter are far more vicious and threatening than they were twenty years ago. It’s both awesome and terrifying (I’m looking at you, Lickers). 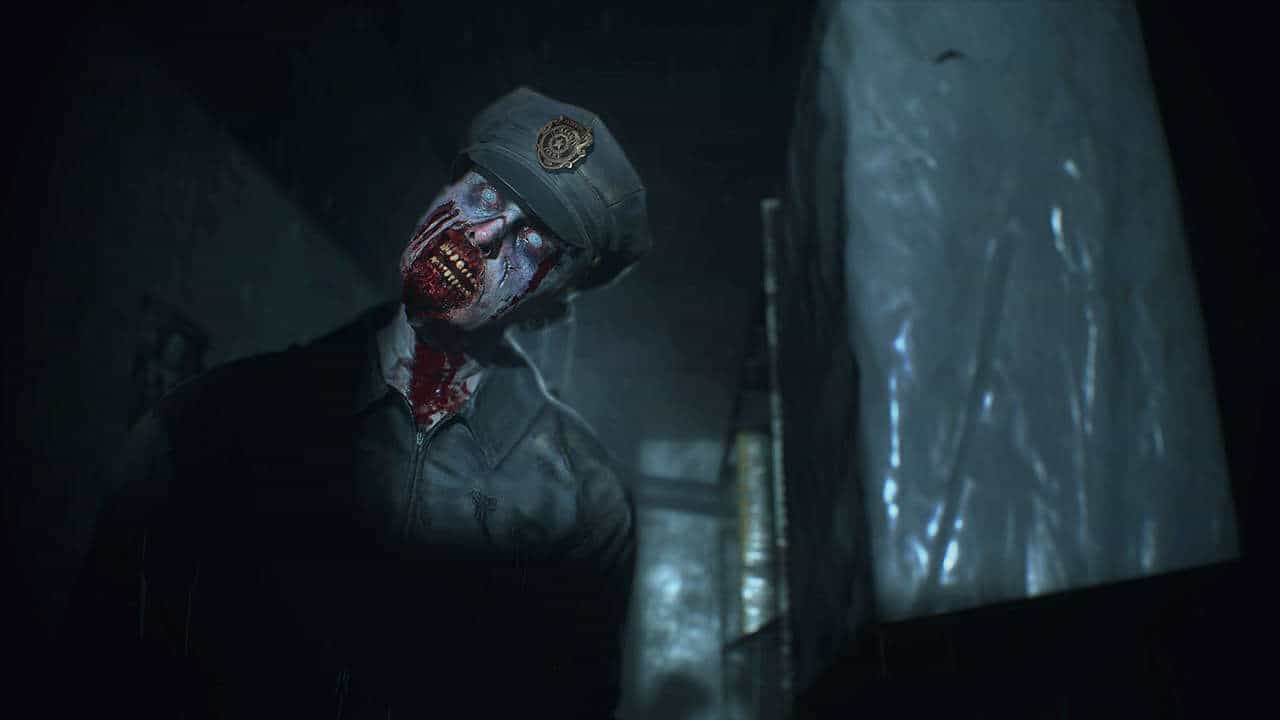 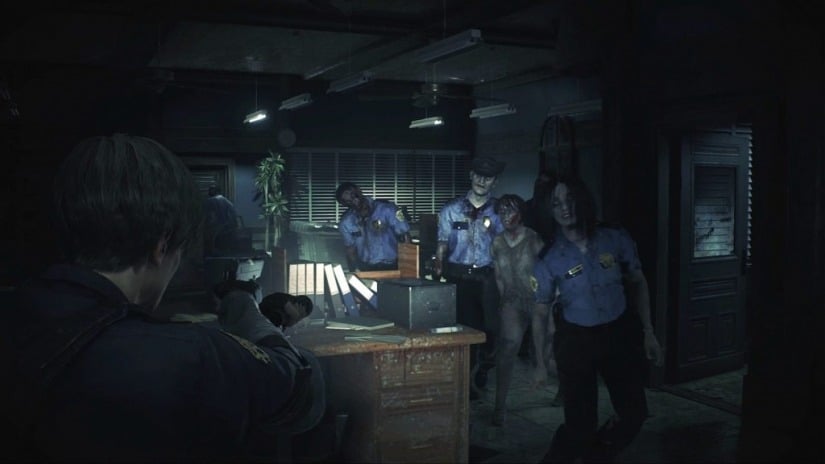 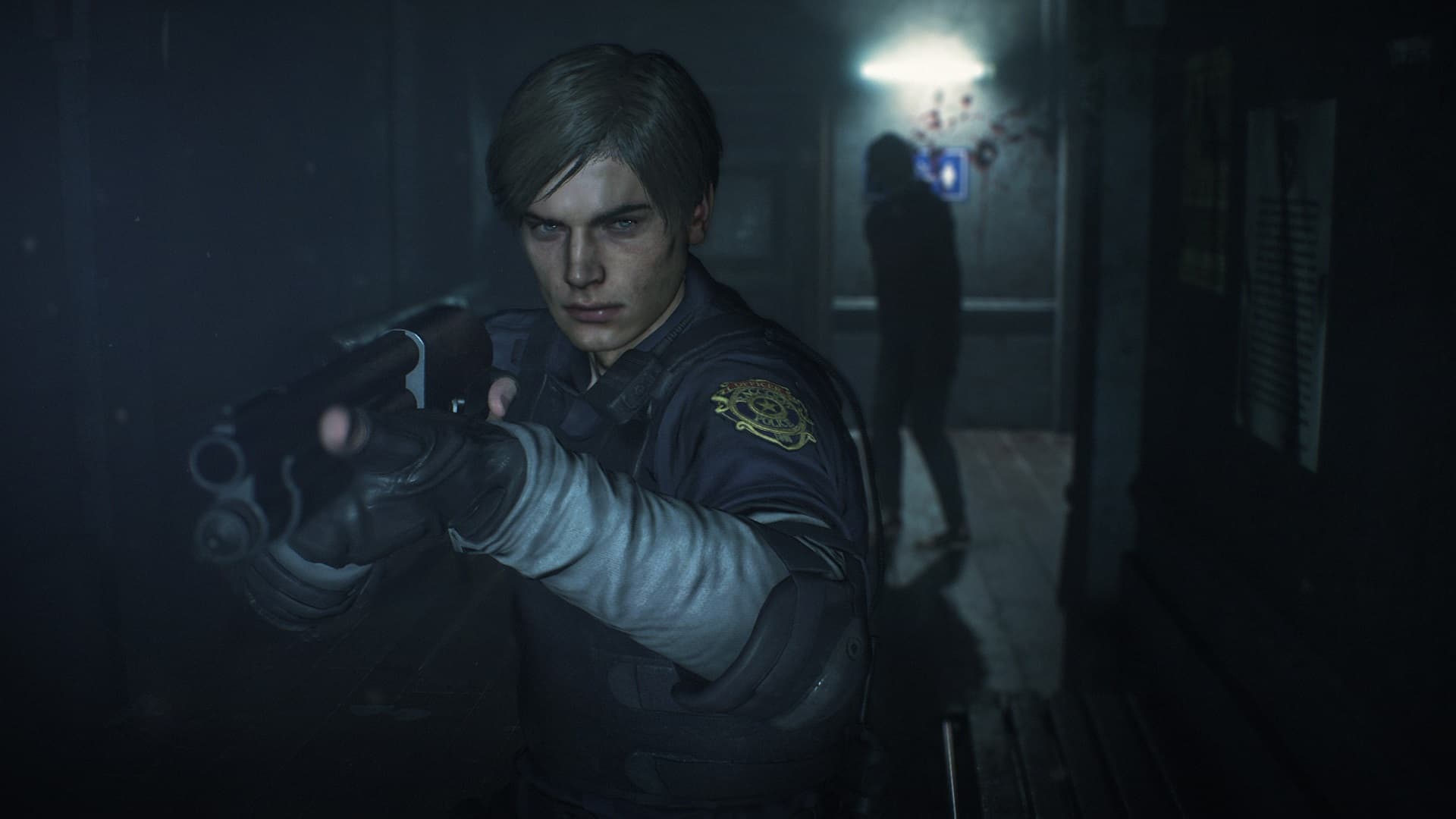 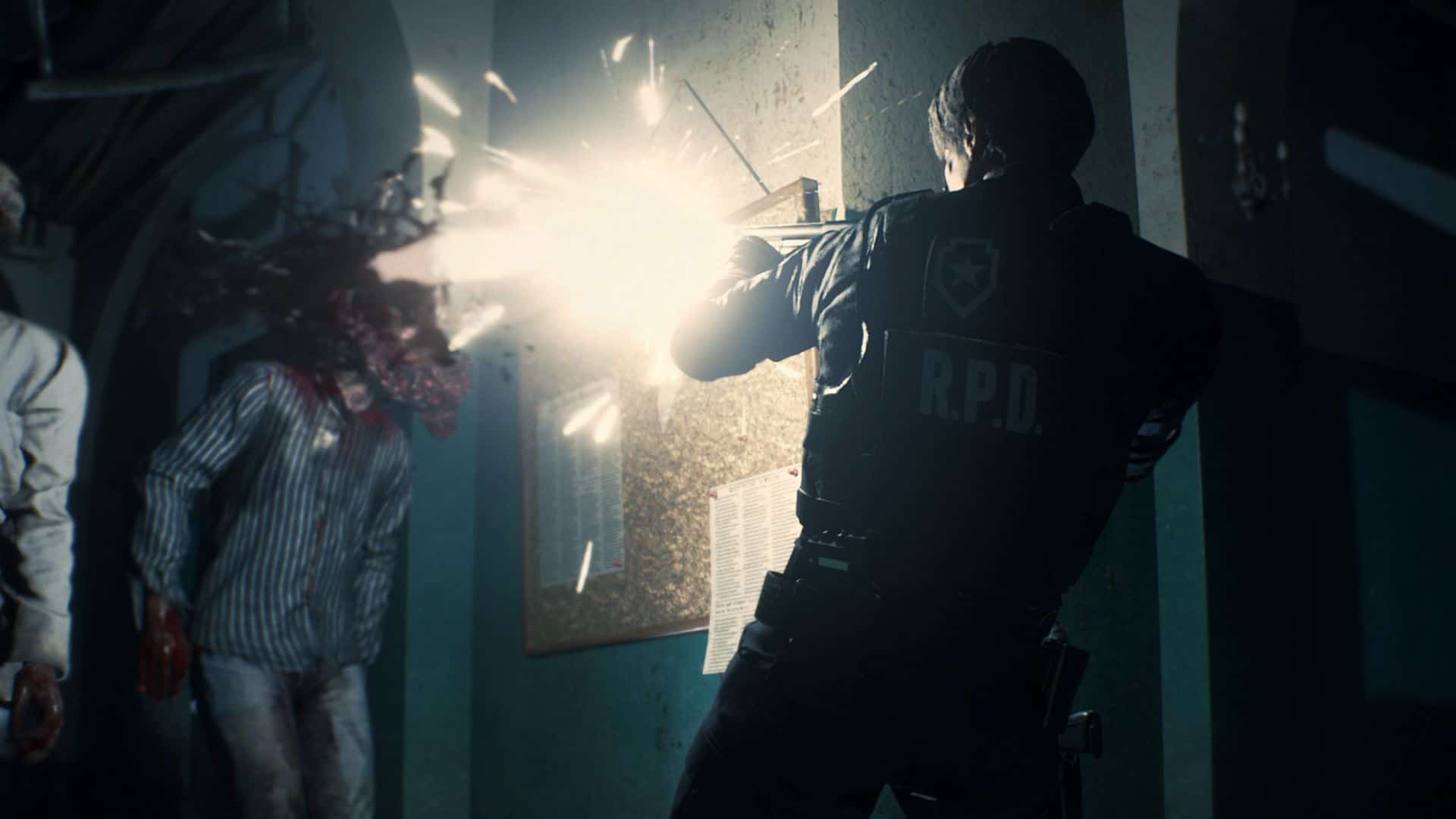 There are changes to story beats and the puzzles are not the exact same, so don’t worry if you’re a massive fan that has played the original many times before. Resident Evil 2 successfully balances tense combat moments of just one-too-many zombies coming in your direction with the more slow paced considerations around methodically chipping away at puzzles.

It’s that classic Resident Evil style of puzzle-solving, where it mostly involves finding the right item that combines with the right mechanism to unlock the next area. It could have been frustrating, but the game is smart enough to keep sections behind inaccessible doors if you shouldn’t be that far ahead yet. You’ll encounter locks, machines with missing pieces, combination safes and more just begging for a solution, but you won’t find one until you’re supposed to, with some requiring extra digging.

“…choosing carefully between your fight or flight response in overwhelming situations is part of the fun.”

While this could put you off as being a little bit simplistic in a way, it means that you’re never going to be stuck for too long. Explore each room carefully, and once done it will be marked on your map as “complete”. No wasted time is spent double-checking areas you’ve already visited, thinking you might have missed something. Once an item like a key is no longer needed, it’s labelled as such so you can discard it. It’s thoughtful and keeps things moving along at a nice, scary pace.

You’ll be thankful for the moments when you realise a compulsory item is no longer necessary to hang onto, as inventory space is still something that needs to be managed carefully. Using the same system as RE 7, items take up slots, and you can upgrade this to carry more with packs as you find them.

There’s storage at the save points, but I did still struggle with managing this space until late stages of the game. Putting a key item into storage thinking it won’t be required for a bit and then having to go fetch it because you’re carrying too many herbs does cause some needless backtracking. 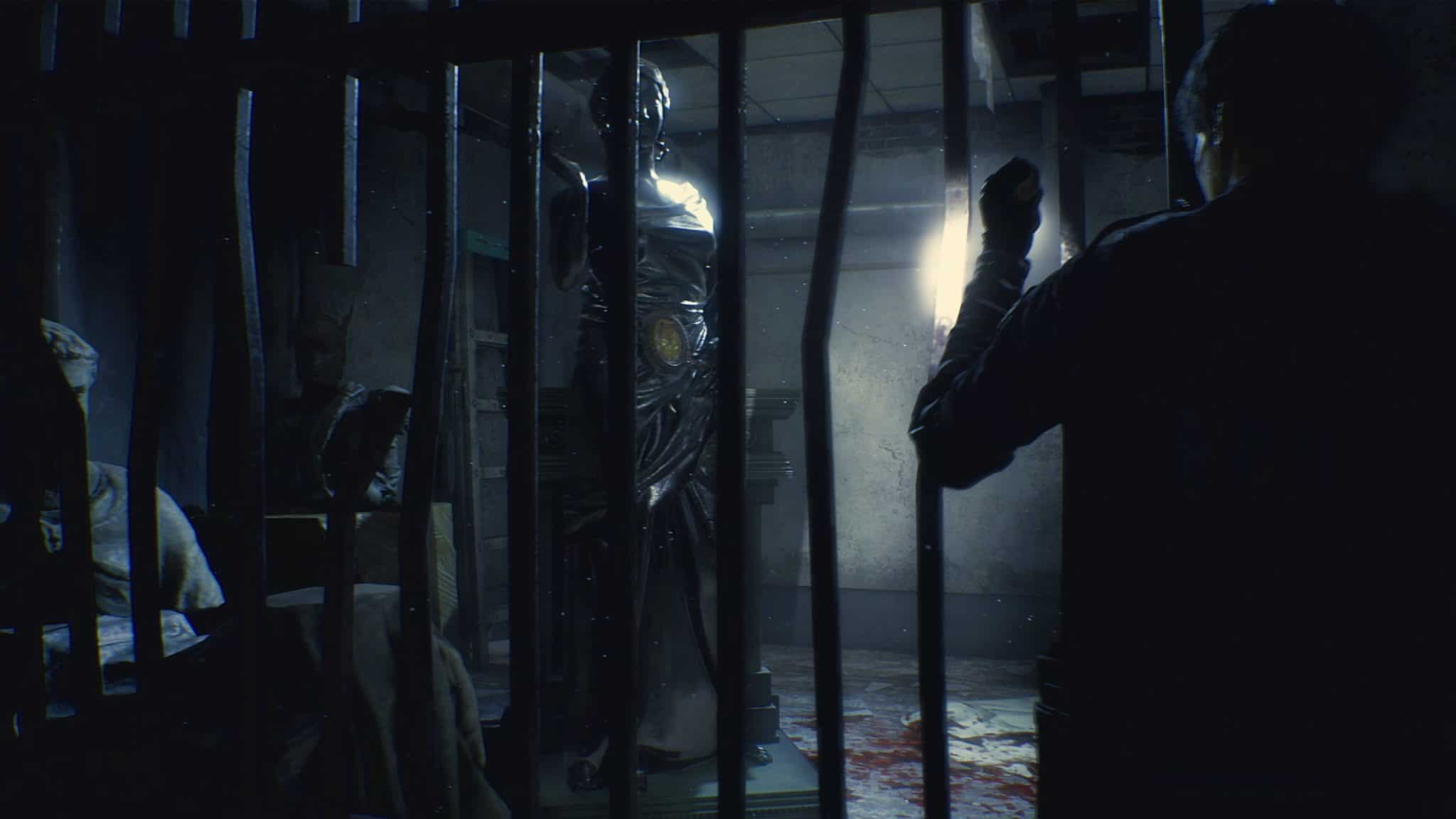 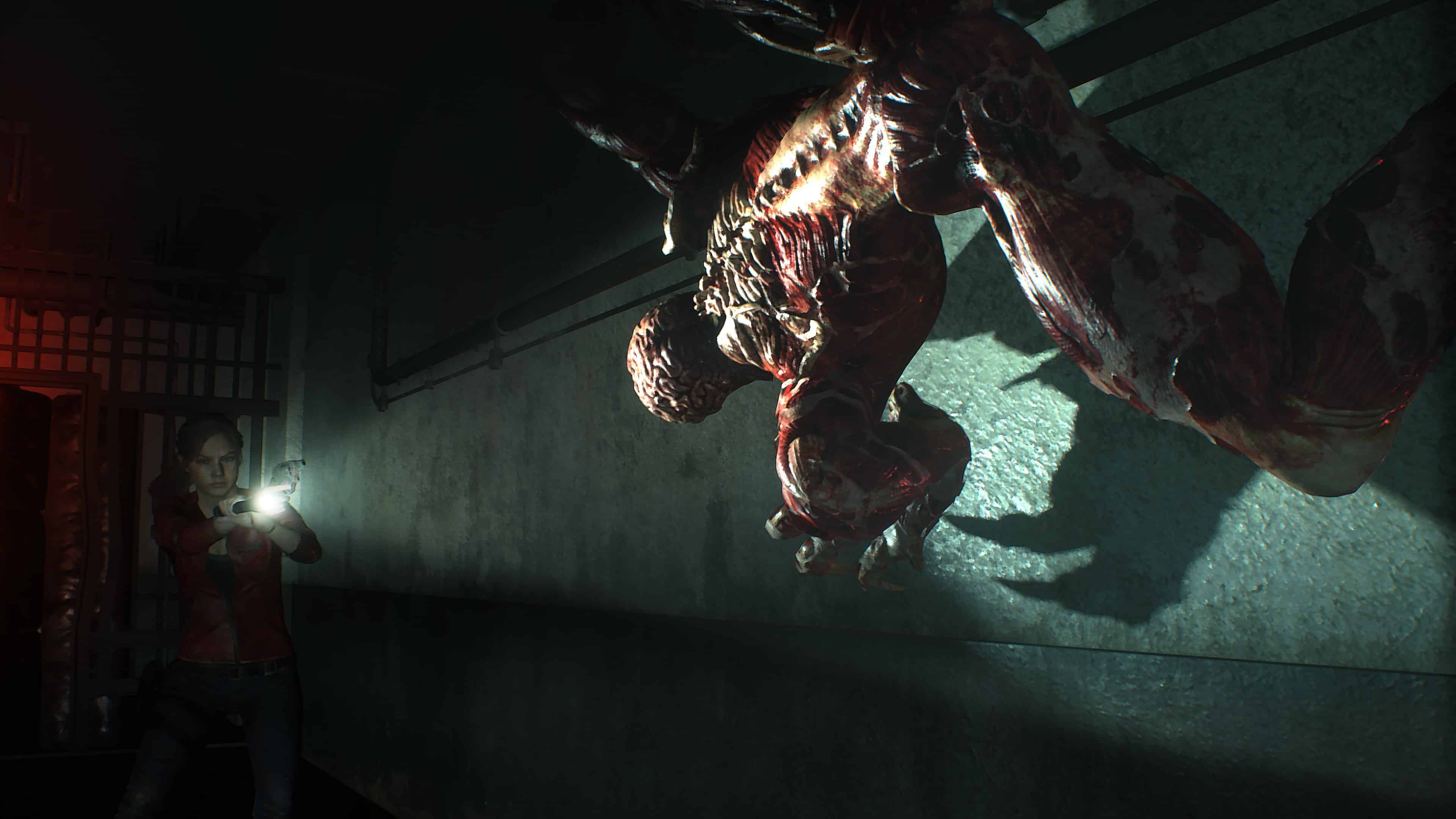 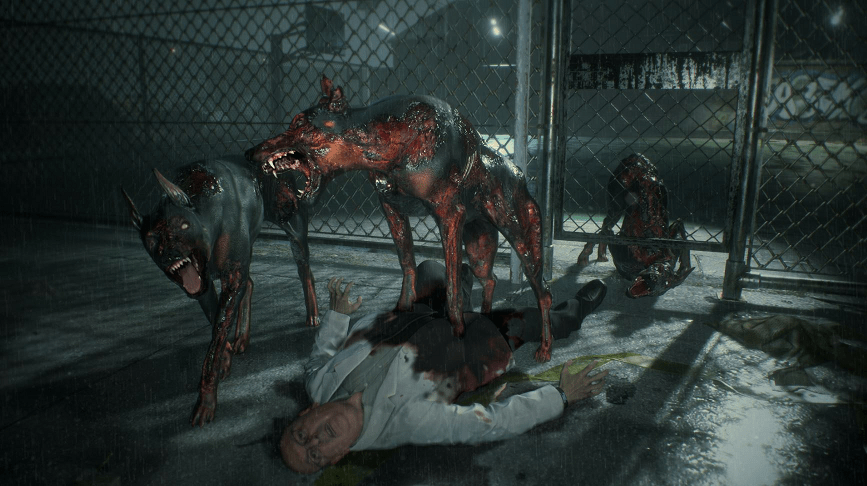 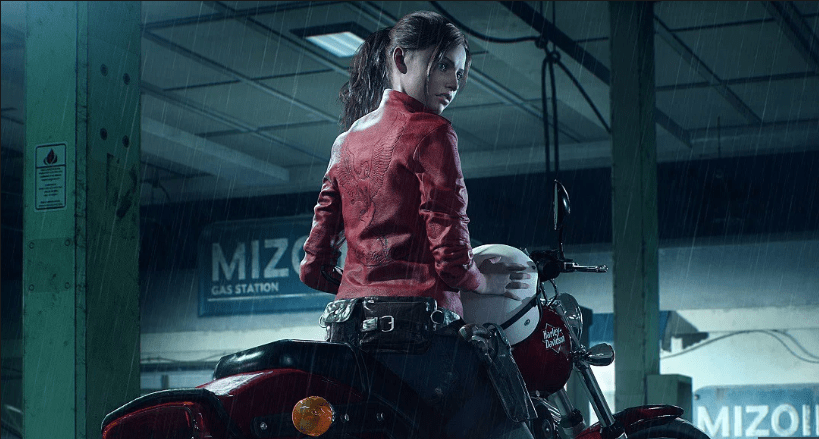 Being smart and trying to survive with minimal supplies has always been a hallmark of Resident Evil, and choosing carefully between your fight or flight response in overwhelming situations is part of the fun. The odds continue to stack against you as you progress further, with nasties like the aforementioned Lickers and, of course, Tyrant, making your life quite difficult.

Tyrant in particular is very much a love or hate situation for me. Once first seen, he spends a decent chunk of time relentlessly pursuing you through the police station. A large, black-coated super-zombie, he stomps towards you and is constantly prowling around in an unscripted manner until he finds you. Then, it’s a matter of running, or temporarily taking him down so that you can make your exit.

Hearing him stomping rooms away creates a feeling of dread – just one of the slick audio cues that enhances Resident Evil 2’s strong sound design – as the last thing you want is to be caught in his grasp. But what began as a scary encounter ended up being an annoyance, as I struggled to complete puzzles or get to certain areas without him getting in the way. When fear turns to irritation, the horror element gets lost a little bit. But even so, he adds a new twist to the formula and builds tension strongly.

Throughout the entire campaign, you’re never truly “at ease”, as zombies often find a way to come back even after being shot down multiple times. Being almost unkillable might feel cheap, but it undoubtedly means you’re always on edge, even when exploring areas you’ve already been to multiple times. You can’t rest on your laurels, ammunition doesn’t come easily and healing is few and far between.

It’s a constant struggle, keeping you on edge as you run from room to room desperately avoiding contact, knowing that just one more bite is the difference between life and death. It’s what survival horror should be.

While ticking all the boxes of nostalgia with familiar narrative and environments, the work that has been put in to achieve this remake from the ground up makes Resident Evil 2 feel like an almost entirely new experience. The parts of the universe that scared me to death as a child have come back with a vengeance to horrify me as an adult.

The polish and care in this remake is a tribute to how important Raccoon City and the creatures within it are to the genre, and proves once again that when it comes to survival horror, Resident Evil really is king.