You know when you are about to explain something disappointing, or give someone bad news, and you take a real deep breath and sigh loudly before speaking? Imagine I just did that before starting this review.

‘Cos damn, something went wrong here.

YIIK: A Postmodern RPG is a retro-fueled role playing game set in the late ’90s; right on the cusp of the turn of the century when dial-up internet was all we knew and job security actually existed. Limp Bizkit were starting to dominate the air-waves, 3/4 length jean shorts were coming into fashion, The Matrix was recently released and sparking existential crises around the globe. The ’90s provides such a rich harvest of nostalgic themes, memories, and cultural icons that it would  be almost impossible not to have some sliver of charm present in this game – yet somehow YIIK misses the mark in the worst possible way.

You play as Alex, a recent college graduate that has returned home to fictional town Frankston to discover things are not what they seem. Through lurking on conspiracy forums, and exploring the local area, Alex discovers a world he never knew existed; multiple planes of existence, astral projection, vivid hallucinations, and dimension-travelling rockstars.

The opening hours and initial premise of YIIK: A Postmodern RPG (hereafter referred to simply as YIIK), are exciting and intriguing – much like the opening scenes of Earthbound, or even Final Fantasy X. Something strange is afoot, and it is up to Alex and co. to find out the truth.

Along the way, Alex meets a cast of characters that range from mildly likable to downright obnoxious. With Alex himself serving as a poor protagonist, having an ensemble of weak party members doesn’t form a solid foundation for the absurd narrative. The core party consists of the narky Vella, naive Michael, emo Rory, hip-hop fan Chandra, anime-lover Claudio, and a 6th character that is a bit spoilery.

With the exception of Claudio and Michael, most of the cast are abrasive, melodramatic, and unlikable. Dialogue in YIIK is horrendously wordy – with most simple exchanges between friends taking upwards of 5 minutes.

Therein lies perhaps my biggest gripe with YIIK: the game does not respect the player’s time. Traditionally, RPGs are long games; we know that when we boot a fresh RPG up that we’re in for some grinding, perhaps some drawn out exposition, and some repetitive combat scenarios. YIIK falls into each of these pits and then some. With the game’s premise being so densely sci-fi and spiritual it is already a bit of a mind-bender to take in, but somehow by trying to over-explain the intricacies of the plot the characters end up running rings around the core point and waste too much time.

The combat doesn’t help either. What starts off as a novel and interesting combat system very quickly becomes dull and frustrating.

Much like Earthbound, the game is set in “modern” times, so the characters are for the most part using regular household items as weapons instead of swords, maces, and bows. Alex attacks using a vinyl record, and generates combos by pressing X on the coloured sections as the vinyl spins onscreen.

At first, this is a cool and interactive way of getting the player more involved in turn-based combat; a break from the constant mashing of X to get through combat instances.

However, one of the things that keeps players coming back to RPGs is the familiarty; much like the comfort of a favourite blanket or pillow, a turn-based RPG feels like home for many gamers. Take away the ability to mindlessly mash your way through combat and you take away one of the core pillars of grinding for XP.

It wasn’t long before I grew to detest combat in YIIK, simply due to the fact that I knew that each battle would be slowed by these character-specific mini-games to generate combos. Don’t get me started on the special abilities either… these take frustration to a whole new level.

“…much like the comfort of a favourite blanket or pillow, a turn-based RPG feels like home for many gamers…”

Ackk Studios tried to revamp how characters would level up in YIIK with the introduction of something called the “Mind Dungeon”. The Mind Dungeon is, in my opinion, one of the game’s biggest wastes of potential. The name alone offers the idea of a challenging gauntlet and potential rewards, but instead is little more than another way to blow-out the game’s runtime. More of a frustrating detour than an interesting game mechanic, I would have much preferred the Mind Dungeon be scrapped in favour of a streamlined combat and XP system.

Visually and audibly, YIIK is a relic of the past that tries its hardest to be acceptable by modern standards. The polygonal graphic style is presented as an homage to late 90s video game visuals, while the dialogue sequences are richly coloured static images that play out in the foreground –  much like Danganronpa or Persona 4. This clash of styles does not work, in my opinion, and is especially jarring when the blocky square headed characters are in the background while the attractive storybook versions are placed in the foreground.

The voice acting is hit-or-miss, but definitely not the worst I’ve heard recently. The music is diverse and is honestly one of the game’s saving graces – lo-fi electronica, early house, and some alt-rock flavours punctuate the soundscapes and make the most mundane aspects of the game at least somewhat enjoyable. Music actually ties quite strongly into the first half of the plot too, so it is clear that the creators put a lot of effort into ensuring that the soundtrack was high quality. 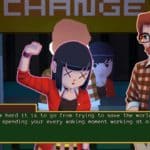 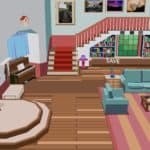 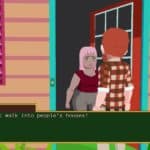 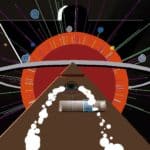 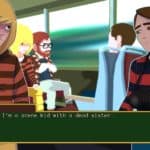 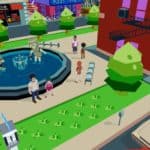 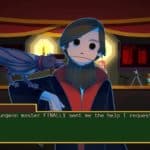 YIIK: A Postmodern RPG suffers from the notion of ‘one step forward, two steps back’. For each good idea there are multiple negatives that pull the game down. A formidable plot and clever ideas cannot overcome frustrating combat, a very strange leveling system, poor dialogue, and badly written characters. YIIK was anticipated by many, and I’m afraid it is more than likely to disappoint.

It is never a pleasure to write a negatively-skewed review, but unfortunately YIIK doesn’t bring much to the table that is worth sampling. A great human once said “keep it simple, stupid”, and I believe the game would have done better to stick to this mantra than try and throw everything into the pot.

Unfortunately, YIIK: A Postmodern RPG is unlikely to revitalize the “modern retro” RPG style that was so exquisitely defined with Earthbound on the SNES, and more recently with the Persona games. If you have a spare 30 hours to sink yourself into an awkward and clunky experience, give YIIK a go. For those who are time-poor like me, and crave something snappy, look elsewhere.