Hear ye, hear ye, another new couch party game is here, vying for your attention. In a world with Mario Party, Smash Bros., and Overcooked being among the top ruling titles of the genre, Big Crown: Showdown doesn’t do much to contend and take the crown. This is okay though, as this seemingly wasn’t developer, Hyper Luminal Games’, intention. Not every couch party game is going to grab all audiences but Big Crown: Showdown does so in subtle ways, with not all of them being as shiny and admirable as you’d like.

Big Crown: Showdown serves as a game unfortunately wrought with obstacles, not only in its fast paced crash course levels but in its design, and this is a shame too. With four player co op,  ingredients are present here that could cause quite a bit of noise in the couch party genre. With pretty yet wacky level design as you bounce, punch and dodge across the worlds of Kasseltoon, Zoggysands and Shivershire, racing to be the first to the end, you can’t help but still be charmed by this potential.

Characters are cute too, with four different colored knights for you to choose from. The polish of these characters is neat but this comes at a cost: with only one armor type, and a few decorative hats to unlock, there’s little to spice up the variation of the characters. This sometimes left confusion between players; forgetting who was playing each character is easy when there’s little individuality. 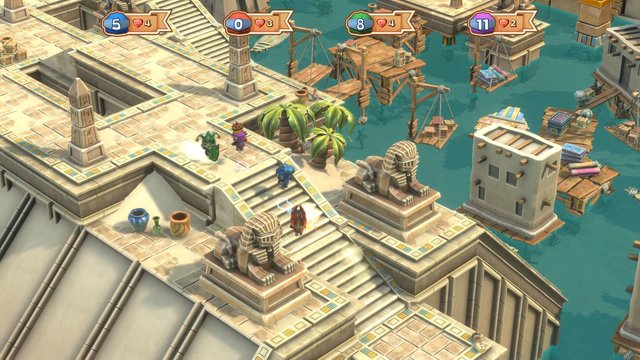 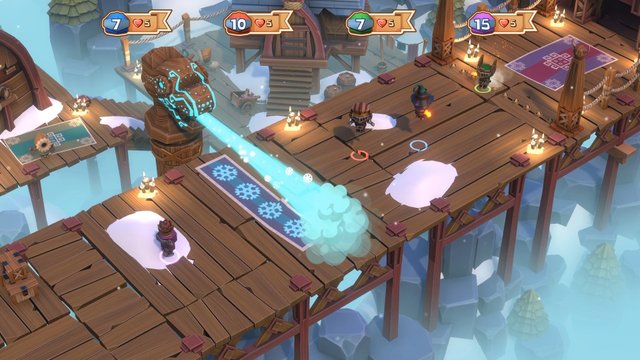 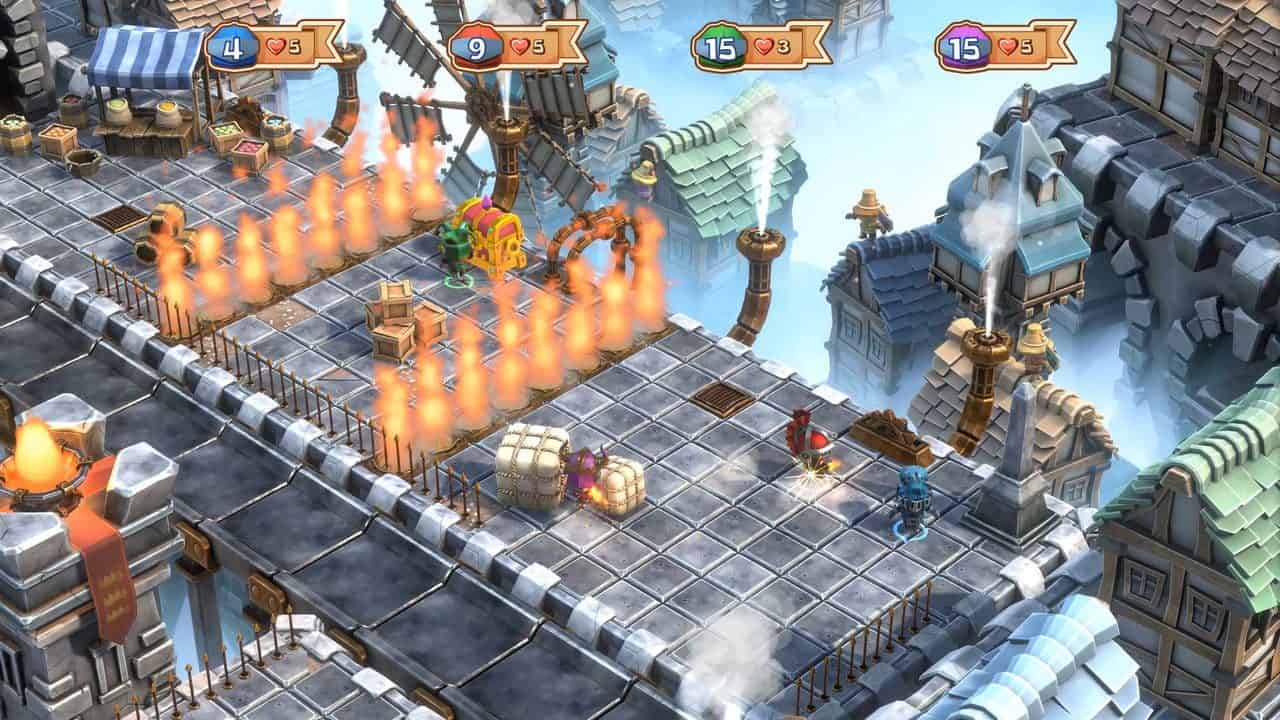 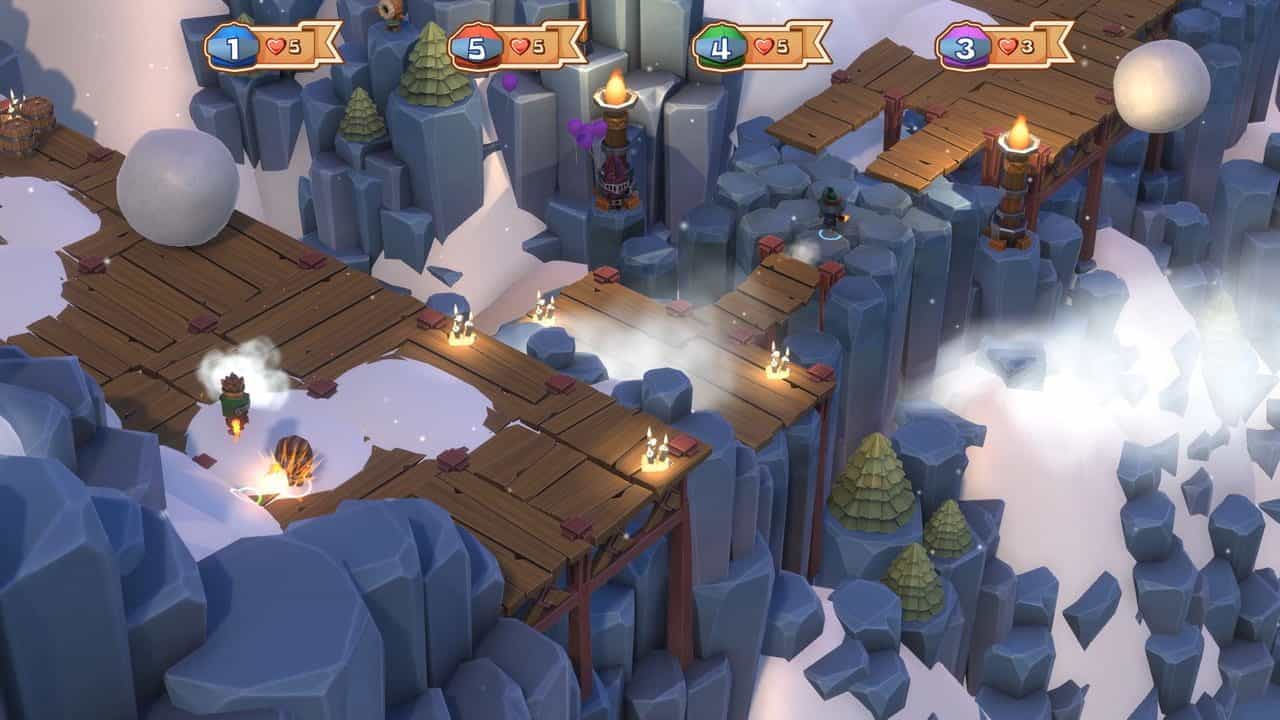 Across Big Crown’s 15 wild courses, a lot works and a lot doesn’t. Movement and jumping can often prove difficult and flawed, with these motions sometimes registering poorly or not at all, resulting in a face full of fire or a character drowning when this occurs. A large chunk of the gameplay was learning to work with this, jumping earlier to reach a platform than you may normally, or avoiding that route all together. It’s unclear if this small, finicky movement was planned, adding to the challenge of the game, or whether it is a design flaw. Due to how unfair and seemingly impossible some collisions were throughout the game though, I’m leaning towards the latter. This is a shame, robbing some of the fun from pulling off difficult jumps and instead being merited on luck rather than skill.

Additionally, it felt like some mechanics were missing, with jumping, punching and the rarely used blocking being the only mapped controls. It felt like more could be added to improve its promise of uniqueness, which too could serve as further replayability. Personally, I would’ve liked to see the addition of power ups, a possible dash button and even emotes to allow for traversal of the levels to be more fluid, varied and fun. A lot of the game feels only surface level because of absences like this, resulting in one of its biggest flaws.

Fear not though, there’s still plenty of fun to be had for audiences of ages for this title. Yes, it is fast paced, but certain obstacles and platforms can make the beat slower in levels, allowing for not only people of low skill but also children to handle the platforming. Most of the fun to be had from the game is cheekily punching your opponent off a platform or into traps as you race by, something that Big Crown exceeds at, capturing the party game formula beautifully. These moments bonded myself and the other players as we laughed off and made light of it, distracting from the game’s faults.

As a small note, it is a shame that I was unsuccessful in finding an online session even in peak times, given how recent the title is on the Switch. While this would personally provide a plethora of further longevity, it can be easily forgiven, considering the Nintendo Switch’s small online community combined with the distraction of bigger couch party titles that the console boasts.

It is clear from the get-go: Big Crown: Showdown is not a game intended to contend, create anything new or change the industry, and for a small price tag that’s okay. Yes, replayability may be found to be lower for more mature audiences that “know better.” However, it is seemingly a great distraction fit for younger audiences, proving a good time sink for those not too critical of its surface level gameplay when looking for a fun party game. So, for a cheap price and a some fun to be had, why not jump on in and do your best to be crowned royalty?