Genesis Alpha One Review – Lost beyond the stars

Man has done what man does best which has left the Earth destroyed. War, corruption and pollution has forced humanity to travel into the cosmos to seek refuge amongst the stars. You are the captain of the Genesis Starship and as such it’s your goal to journey through uncharted space and create a functioning civilisation.

This is the basic premise of Genesis Alpha One. It’s a game that puts a lot of weight on the player’s shoulders as you single-handedly design your own space station, explore the unknown, gather resources and continue to expand and survive.

Genesis Alpha One borrows elements from other games and genres to create a unique experience. Players will see glimpses of first-person shooting, rogue-like, survival, tactics, simulation and more. Each run starts similarly with the player using what little resources they have to create a very basic space-station. Rooms of your space-station lock together as you design your layout with mandatory rooms such as your crew quarters and greenhouse forming the basis of your station.

You then warp into your newly formed station which you can explore from a first person perspective. Moving into the rooms you’ve created, you’ll begin assigning the crew members at your disposal to perform certain tasks. You’ll be limited by your crew as to what you can perform because every function requires a crew member assignment. Once you get your cloning operations up and running however you’ll have more options at your fingertips.

Unfortunately your AI crew is far more artificial than they are intelligent, shambling around the space-station and ignoring life-threatening situations such as aliens aboard the ship. Crew members lack personality and are barely distinguishable from one another. Even though this is likely intended design, it makes things detaching and frustrating, because boy oh boy are these some of the dullest and most intellectually challenged crew I’ve ever come across in gaming. 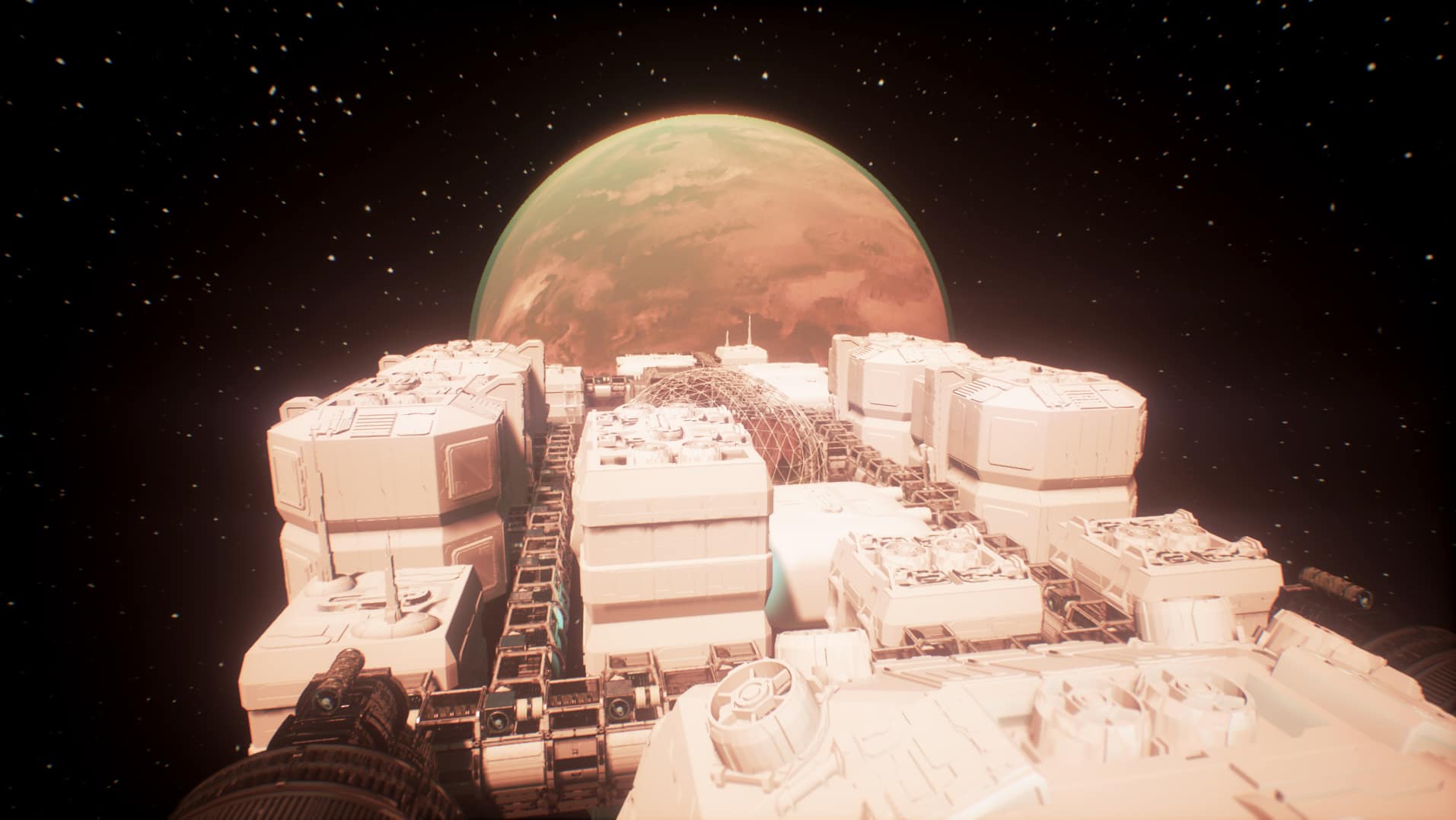 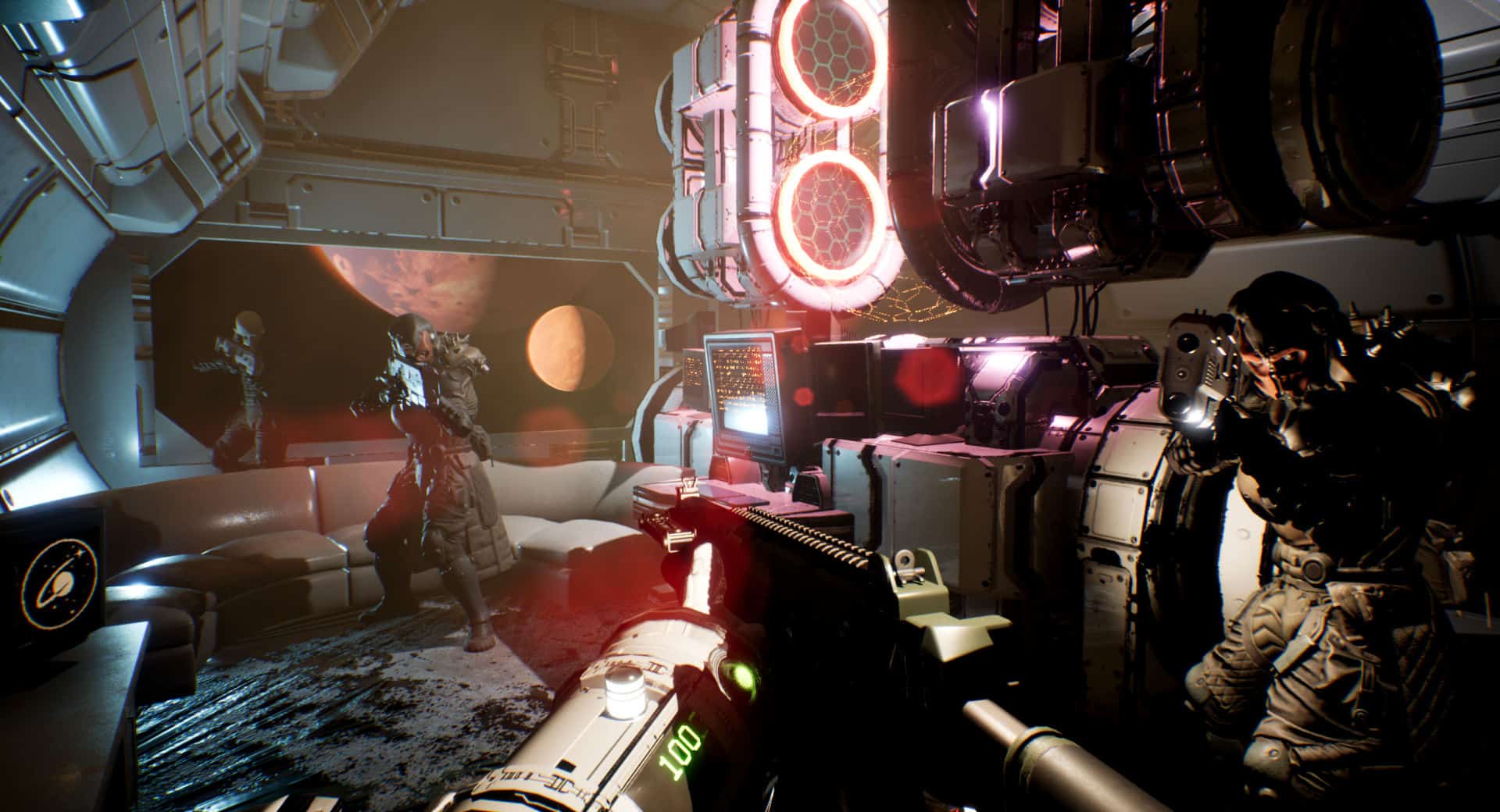 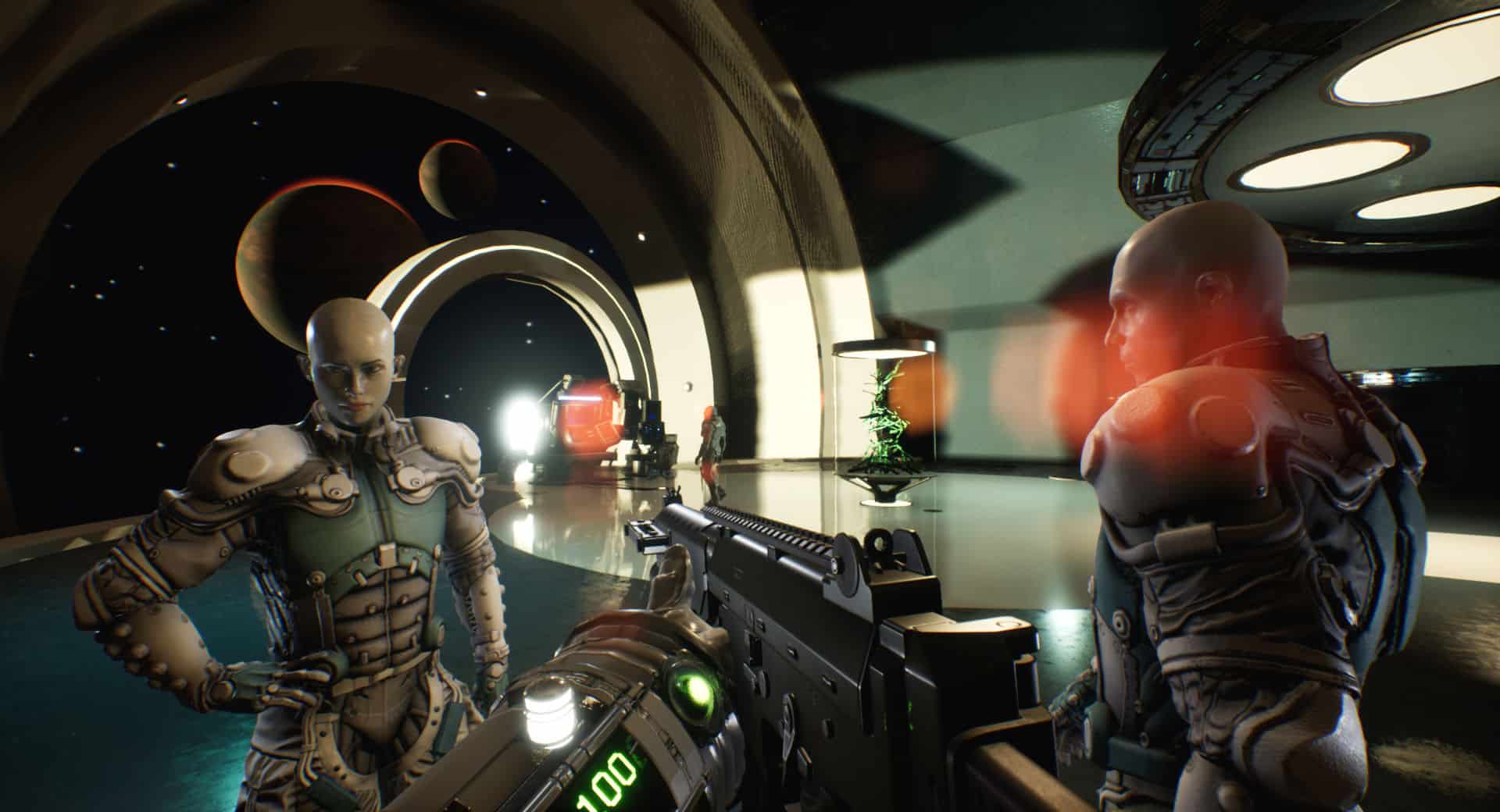 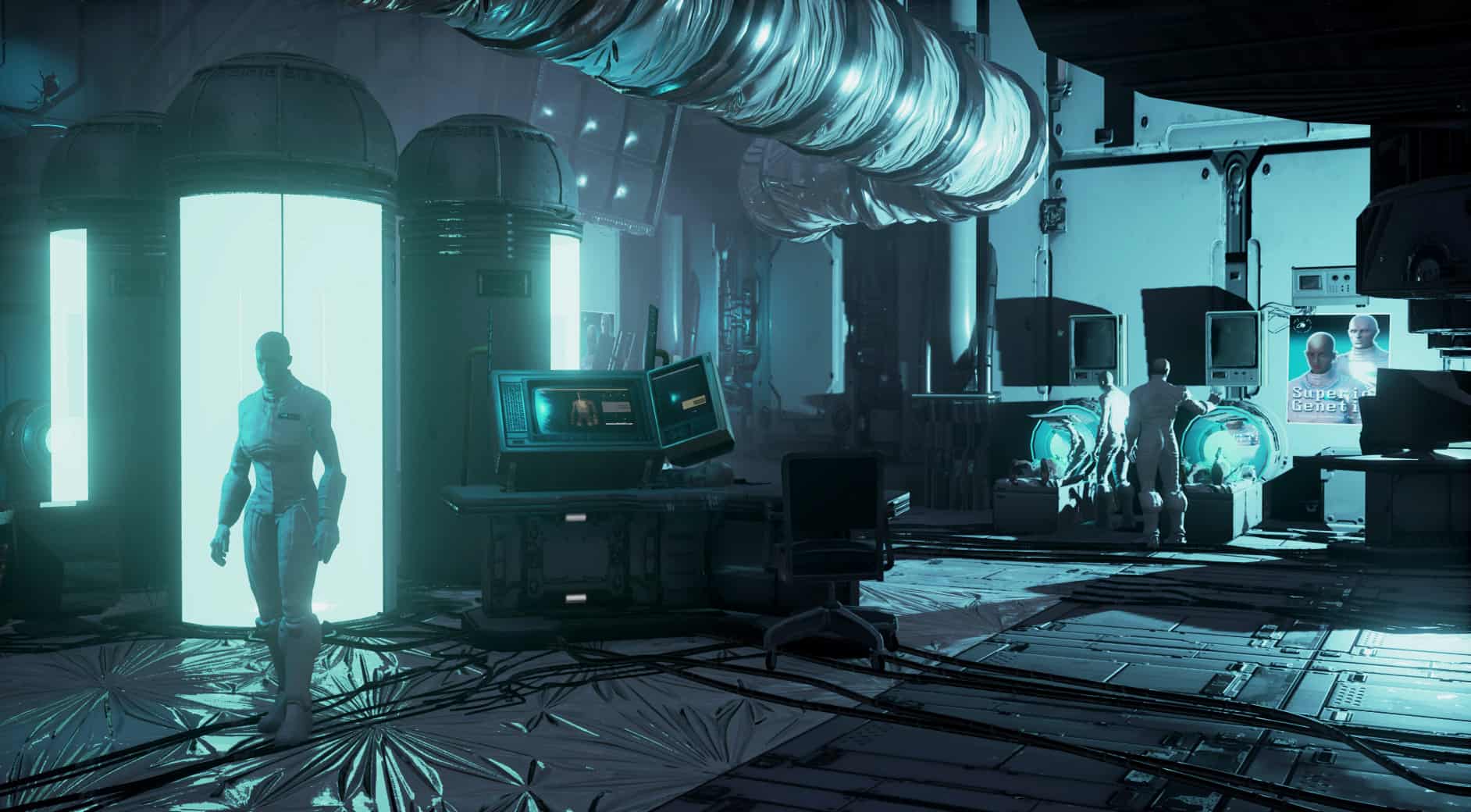 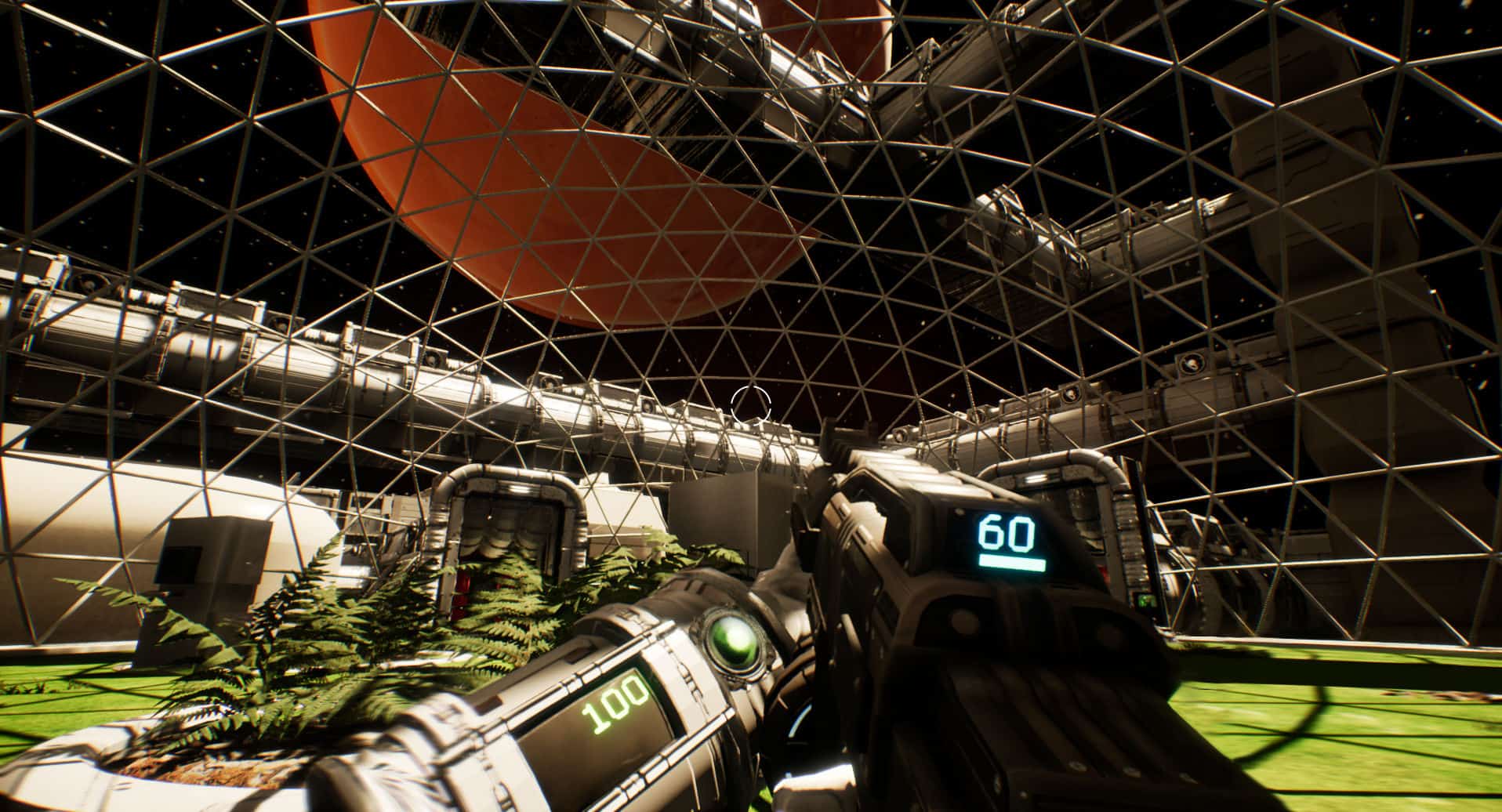 Genesis Alpha One works in many ways. Being able to build your space-station so easily and then immediately warp into your new creation to view it from a different perspective is satisfying. The randomised elements will make each new game you play feel unique and interesting. The mixture of strategy, first-person shooting and simulation will keep you from getting bored of any single element. There’s also a nice natural progression as you gather more resources, continually upgrade, build up defences, build up your crew, and continue to explore.

Unfortunately Genesis Alpha One may do some things well although the game can also feel like a massive drag. It’s almost as if the developers tried to do too many things and weren’t able to master any of them. The narrative just isn’t worth paying attention to and the combat became a chore, it didn’t feel very empowering or entertaining at all. Landing on a planet to gather resources is awesome in theory although far too frequently the actuality was just dull. There’s nothing grandiose or awe-inspiring about too many of these alien locations, which just feels like such a missed opportunity. There’s also a big limit to what you’re exploring here.

Certainly the elements that worked best was the simulation and roguelike mechanics. It almost makes me wish there was a pared down version of Genesis Alpha One that cut out some of the fat and just let me build my kickass space-station, gather resources and continue to expand.

Unfortunately the game feels like a prime example of doing too much rather than narrowing your focus and doing one thing well. This creates an experience that isn’t quite as gripping as it otherwise should be.

Whilst Genesis Alpha One may struggle to be as effective in some ways as it is in others, I know this is a game that will find its dedicated audience. For me there were too many tedious, slow, or imperfectly implemented elements for the game to get its hooks in. Although for those who want to live out their space fantasy and won’t mind all of the smaller annoyances, you’re bound to have some fun here. Especially if you’re the creative type who will appreciate the constant constructing, upgrading, and planning that goes into your space-station.