Dead or Alive 6 Review – Lets hear it for the girls

Over time the series developed a bit of a reputation though. It features bouncing breasts for the females, there was a beach volleyball spin off game, settings allowing the player to change the level of bounciness, and the ability to zoom in on finishing poses. There really is no other way to put it; the presentation of the series has an extra light diet soft-core porn flavour. It’s not the first game to take an angle as a point of difference; Mortal Kombat did it with violence, Dead or Alive does it with sex. But low-brow controversy aside. How has Dead or Alive 6 turned out?

Character-wise there are 25 returning characters plus two new ones hence a total of 27 so there is a decent selection. The gameplay of the characters are somewhat similar but more on that later. There are unlockable outfits for all although some are paid DLC. These are generally less dressed outfits for both the girls and the guys playing up the eye candy aspect of the game. Speaking of outfits, as the fight goes on, clothing is lost in a bizarre way – losing glasses aside. For example, holes around the stomach region or other odd locations. There is a strange implication that moves will reveal aspects of the characters bodies which you will really only notice during the victory poses.

In terms of gameplay, Dead or Alive 6 is extremely basic. It really is punch-punch-kick or punch-punch-press a direction-kick. Throws are a single button and special moves have their own button. Reversals are easy, press back and guard. It is a paper-scissors-rock situation here. The characters are pretty unbalanced, for example if you choose a character that relies on throws and find yourself against a quick opponent you will be in trouble. Versus the AI it is not so much of an issue but if you play another person your controller is going through your TV. I met a player online that spammed the same move through three rounds and there was literally nothing I could do other than hit the odd reversal.

Speaking of online play, when I decided to take on the world 9 out of 10 opponents were using the female characters. Now, that is not to judge the gender of my gamer opponents but I guess if we are to accept the idea that the game is made to appeal to teen boys, the female characters certainly have the edge when it comes to matches and are clearly the gamer’s choice. Playing against people exposes the lack of balance between characters and gameplay styles. If you have the wrong character against a cheap player, you will go down in frustrating fashion.

Dead or Alive 6 features an elementary story mode which is sadly all too common these days, featuring a brief intro vignette followed by a fight which is easily won followed by another vignette. It features your standard story tree, where you can follow the characters as they prepare for the tournament. Again there is a softcore porn type of girls implied interest in other girls type of theme happening. But interestingly when it comes to male versus female story fights, the majority are approached tastefully and are usually framed in a non-serious sparring manner making it clear there is no male against female aggression involved, it deserves bonus points for that.

I must admit though, I am tired of this type of storytelling in beat ’em ups. In pro wrestling for example, matches tell stories as much as the promos do. Even motorsport now, the commentators will tell the story as the race continues. I think that it’s time that fighting games start to recognise that in a single player story mode, stories can be told in battle. Perhaps some quick time events or mid fight narrative would help make it feel like a story not just a bunch of one match fights with narrative either side. Maybe fighting games need commentators. Either way, for the latest fighting game on the market, there are no innovations here. 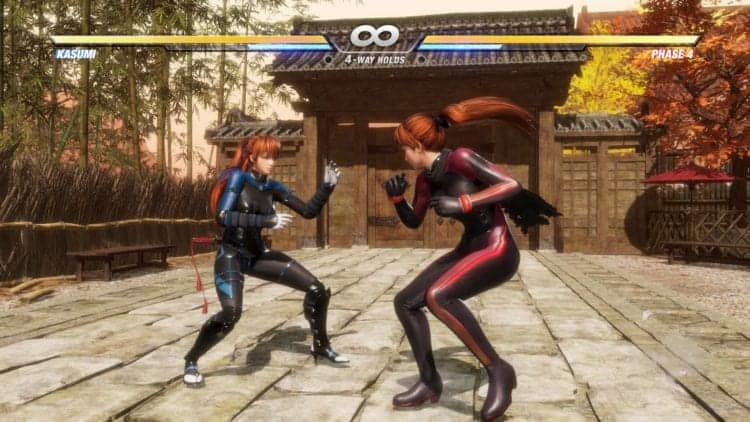 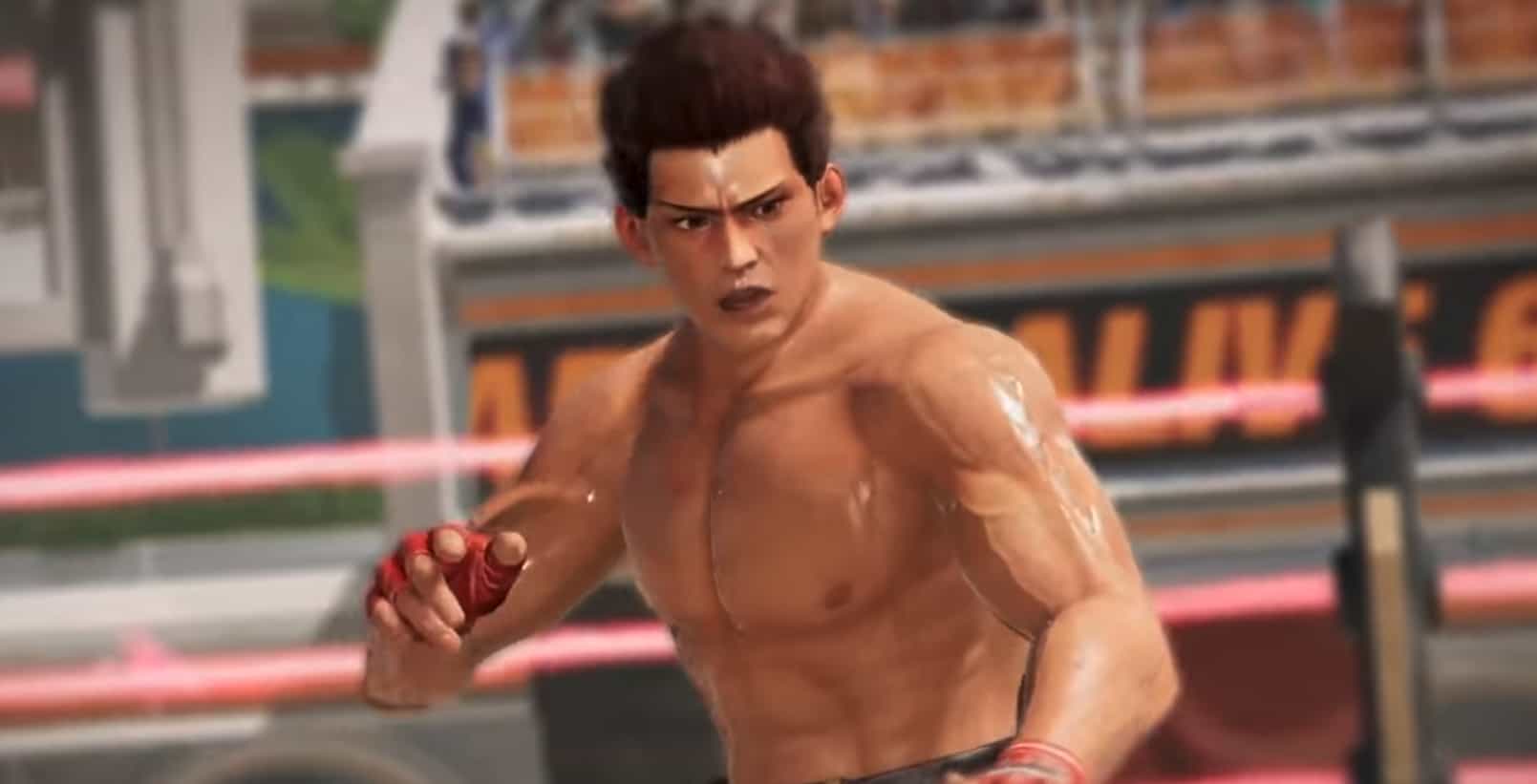 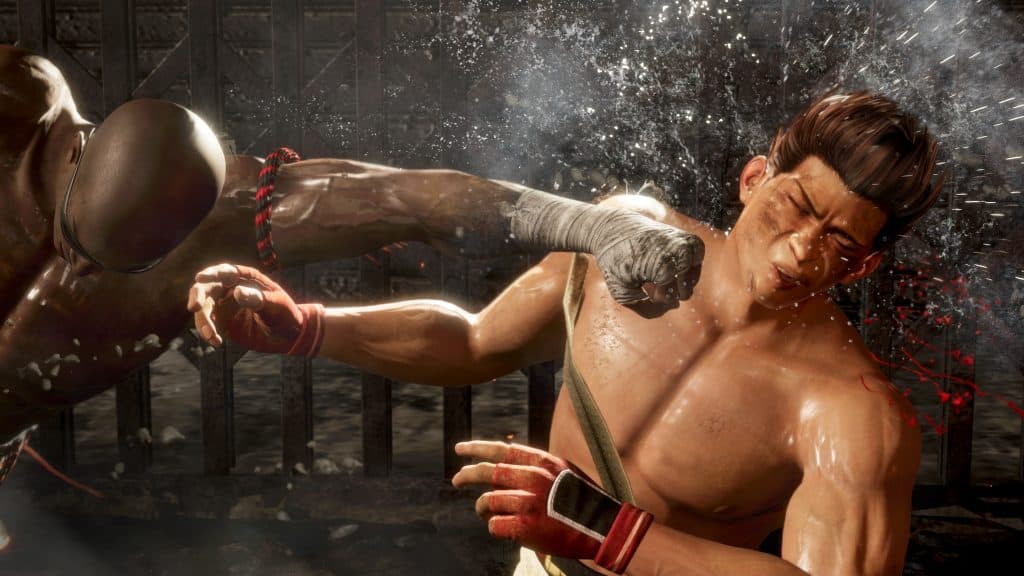 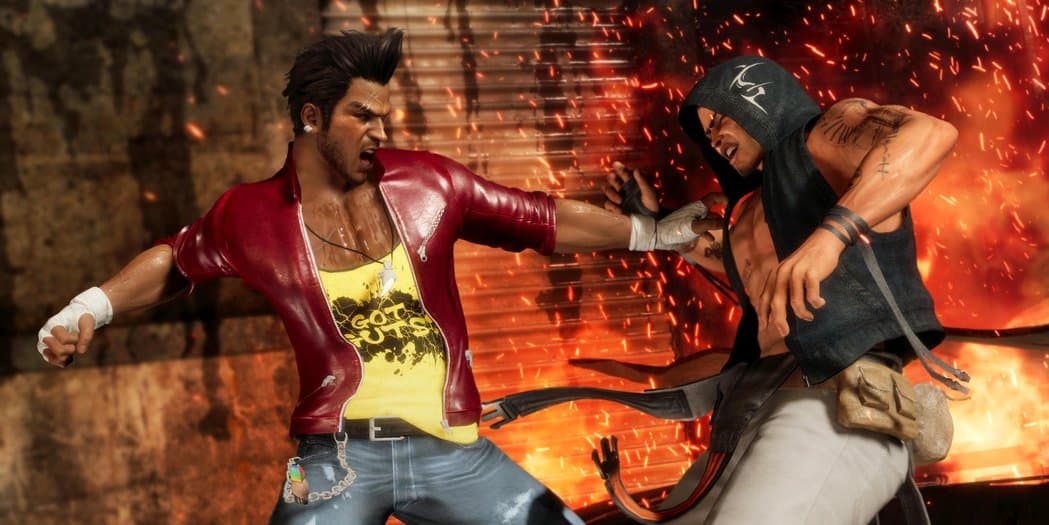 Dead or Alive 6 features a quest mode, which is essentially again different battles but with challenges such as inflicting X amount of damage, performing X amount of reversals during the match and so on, to achieve a rating. The rewards are much like those earned in every other mode and much like Dead or Alive 6’s peers you get credits to unlock text background stories and outfits. It is handy for learning the mechanics of the game and if you are a fan of the series and the characters its something to dig into. But for the majority its just filler and I doubt many players will be going for 100% completion.

The graphics themselves aren’t anything exciting. You get the bouncing breasts which is almost a trademark for DOA. The guys will end up with sweat on their bodies which you can zoom in on if you like but their muscles don’t shake the same way the girls do. The backgrounds are disappointingly rough for the most part when you consider what other programmers can do with scenery in third person adventures. They are sparse though and most will have secondary or third areas in which to fight.

The backgrounds feature pterodactyl eggs, tanks and spectators getting involved so they are definitely active areas. But again they are unbalanced, one level you can essentially throw your opponent over a fence and down a hill which does massive damage. Which is cool but unfair as I got the upper hand on more than one online opponent doing that on the particular level.

Overall Dead or Alive 6 is not a bad fighting game, in many ways it’s very good. Its easy to play, it has a variety of characters and all of them are pretty. It has interactive stages and all of the game modes you would expect other than team battle. It features the requisite story mode and online ranked play. Despite its reputation for cheap thrills and smut, it’s focus on the strength of the girls and the impressively thoughtful way its inter-gender story mode matches are presented indicates there is a more beneath the surface than meets the eye. It’s certainly not a contender for best fighter on the market but for fans of the genre I doubt they will be too disappointed.

Dead or Alive 6 is a perfectly fine fighting game,  featuring intuitive controls that are second nature to any beat ’em up player. Although the gameplay could be considered overly simple, nailing multi hit combos and juggling are still fun. Despite its reputation for low brow softcore treatment of the females, they are the most powerful characters in the game and the players choice online. The story mode though basic overall treats the intergender matches with an interesting amount of care given the series’ reputation. Overall, the gameplay stands up for itself, it will be a shame if Dead or Alive 6’s recent controversy overshadows the game itself.