Kirby’s Epic Yarn was a surprising gem from the Wii era. Its bright fabric visuals oozed whimsy and charm. Its level design was clever, making you think on your feet as you made your way through. The gameplay was imaginative, bringing a whole new control style to the established series. Gone were the power-swapping and floating. In its place you would whip, ravel and swing your way across patch land, transforming into UFOs and giant robots as you retrieve the magic yarn and restore the land.

The yarn and patchwork art-style was gorgeous. From the simple character models, to the collectable beads and hand-stitched landscape, there was something charming about moving through a living quilt that just made you feel comfy. In fact, Kirby’s Epic Yarn was the epitome of comfy gaming. Kirby’s Extra Epic Yarn is all of that and a bit more. The more comes in the form of extra difficulty, new abilities, new mini games, and an expanded list of décor items to decorate your pad. 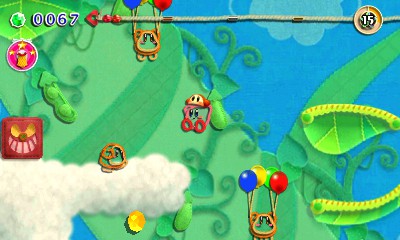 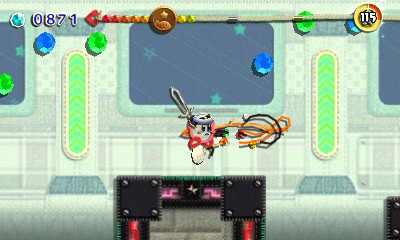 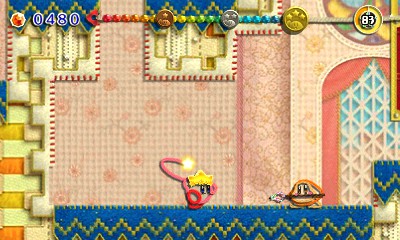 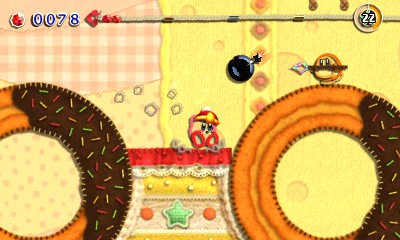 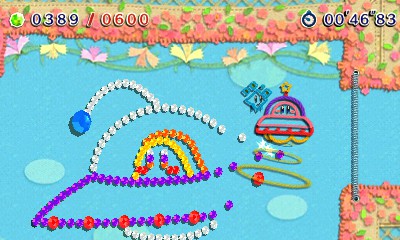 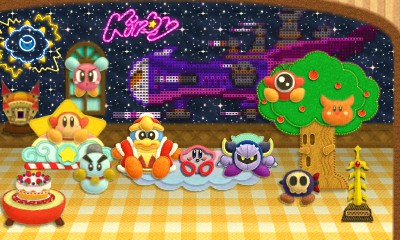 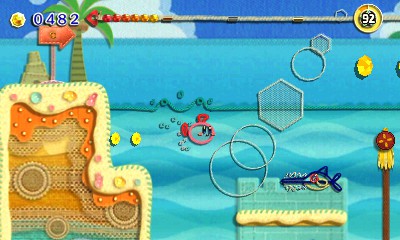 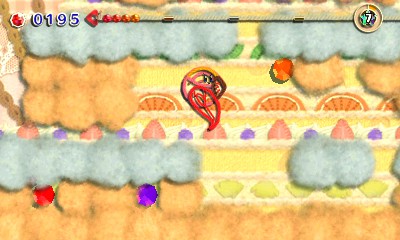 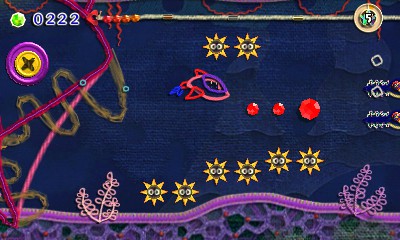 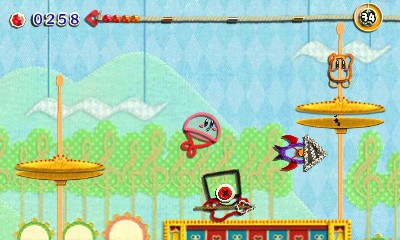 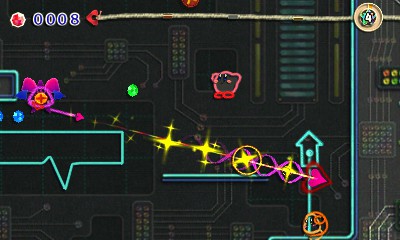 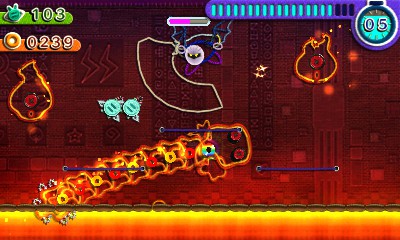 Devilish mode acts as the extra difficulty. In this mode, little devils will appear throughout the levels and will attack you at random intervals. There are three kinds of devils and all of them act more as an annoyance than anything else. It can get frustrating, forcing you to stop and deal with these winged pests before they hit you. This is where the life meter comes into play. It allows you to take five hits before you get a game over. Getting a game over isn’t a major set-back, but it’s just aggravating enough to make you consider ignoring Devilish Mode altogether. You see, the whole point of Devilish mode is to unlock extra bits for Kirby’s pad. For every 5 pieces of the life counter you collect, you will get some piece of furniture you can then place around your virtual hovel. This makes Devilish mode feel superfluous. Unless you’re a perfectionist striving for that 100% complete rate, there’s no real drive to stick with it through-out the game.

The new ‘Ravel Abilities’ are functionally the same as Kirby’s copy powers in other games, and add a welcome sense of familiarity to Kirby’s Extra Epic Yarns play-style, which fans of the series may find to be a welcome change. There are six Ravel Abilities, and each one is a sort-of copy of powers found in the main series. The Knitting Needles allow you to make balls of yarn anytime, and bigger balls of yarn when you grab an enemy. It acts like a powered up version of your base moveset, and can help when you’re in a pinch. Wire is essentially the sword ability under a different name, allowing you to swing a sharp object around for massive damage. The Button lets you throw exploding buttons, Nylon gives you an extra jump, suspending you in the air and sucking up surrounding beads. Bobbin lets you throw a bobbin like a yo-yo. And the Stitch ability has you throwing needles like they’re shurikens.

These abilities add a little extra depth to the gameplay, allowing you to choose how you want to tackle levels. As mentioned before, they’re a welcome addition. One of the complaints often leveled at Epic Yarn is that it doesn’t feel like a Kirby game. The Ravel abilities fix that; they add a connection to the main series with the familiarity they provide and helps to ground the experience overall.

The new minigames are fun distractions. Dedede Gogogo is a Super Mario Run style experience, featuring everyone’s favourite obese penguin. As Dedede, you charge through levels, collecting fuse beads while trying to get the fastest time. Your performance is ranked on a scale of C to S and achieving each rank unlocks a fuse bead pattern allowing you to, you guessed it, unlock more swag for Kirby’s pad.

It’s the same story for Metaknight slash. In it you play as Metaknight, flying around the world with the express purpose of racking up enough kills to up your rank so you can unlock more patterns for the pad. To build these patterns, you need to run the levels multiple times, collecting enough of the right colour beads to meet the objects criteria. This leads these fresh and fun additions to eventually feeling stale and repetitive.

“Kirby’s pad is relaxing. Arranging items and creating different digital styles is cathartic in its own weird way.”

Kirby’s pad in Kirby’s Extra Epic Yarn is a bit of a time waster. So much of this game, from its collectables, to the new additions is geared towards this feature. And despite my annoyance with that aspect, Kirby’s pad is fun. It’s relaxing. Arranging the items around place, creating different digital styles is cathartic in its own weird way. There’s 259 pieces of furniture to collect throughout the game, so you’ll be spoilt for choice when decking out your home.

One of the more disappointing aspects of the remake is the lack of co-op. Multiplayer was such a big part of the original and its absence is certainly felt. There’s so much of it that reminds you that it was meant to be a shared, from the loading screens to the cut-scenes. So, its weird playing through by yourself, knowing this used to be a joint experience.

On the whole, despite its flaws, Kirby’s Extra Epic Yarn is fun. If you’re new to the franchise, or missed the original release, then this one may be worth picking up. Even with some of the repetitive features. There’s a strong game at the centre that one can get cosy and sink hours into. If you’ve played the original, then there may be just enough new material to hold your attention.