One Piece: World Seeker Review – Seeking what is missing

Being a huge fan of Eiichiro Oda’s manga One Piece, I was super excited to get my hands on Bandai Namco’s latest game project, One Piece: World Seeker. Touted as being an open world role playing game with an original story penned by the celebrated author, Oda, as well as receiving artistic input from Toei Animation crew members – how could I not get excited? The one question I had to ask however: is One Piece: World Seeker a successful game, or just another anime themed release with too little going for it?

The story of World Seeker starts with a bang as Luffy and his faithful Straw Hat make a daring attempt to infiltrate a skyward prison, located on the infamous Jail Island – an island that (yep, you guessed it) is home to a number of differently modeled prisons. From here their attempts to seize a fabled treasure is thwarted and they’re forced to flee and regroup before making a fresh attempt at their goal. From here it was up to me (and Luffy) to find our missing nakama and uncover the mysteries of Jail Island.

Having thoroughly enjoyed the opening cinematic of World Seeker, I couldn’t help but marvel at how it felt like just another adventure with the Straw Hats. The graphics and smooth animation brought a smile to my face, psyching me up for a fantastic gaming experience. The gameplay, however, brought me crashing down to earth really fast. Having only Luffy to control was understandable from the beginning, but as the game started to progress it became clear very fast that only Luffy would be a controllable character for the whole game. This immediately rubbed me the wrong way as One Piece’s strength as an adventure story is its ensemble cast of colourful characters – cutting them out of gameplay is simply criminal.

Despite the fact that only Luffy was playable I made a conscious effort not to let it annoy me, and as I explored my new surroundings and gained new abilities I understood why. The open world of One Piece: World Seeker is stunning, doing a great job of combining the familiar style of animation fans of the series are used to, with a more realistic flair of the cell-shaded surrounding areas.  Travelling became much more streamlined once quick-travel options were opened, as well new Gum-Gum abilities that allowed Luffy to assail tall buildings with a single push of a button. World Seeker’s open world is designed for Luffy to travel with ease, so it was for this reason that he was the only playable character.

Battles in One Piece: World Seeker were a mixed of experiences; some tickling me with delight and fanboy fancy, at other times inducing a rage more terrible that that of Big Mom’s hunger pangs. All of the signature attacks and moves that Luffy has in his arsenal are lovingly detailed and pack a wallop, however I couldn’t get over how poor the aiming mechanics felt, and became increasingly annoyed at how easy it was to be knocked back by the slightest graze of a bullet. Getting to choose between either Observation or Armament Haki gave me just enough variation in gameplay to keep me satisfied – but only just. 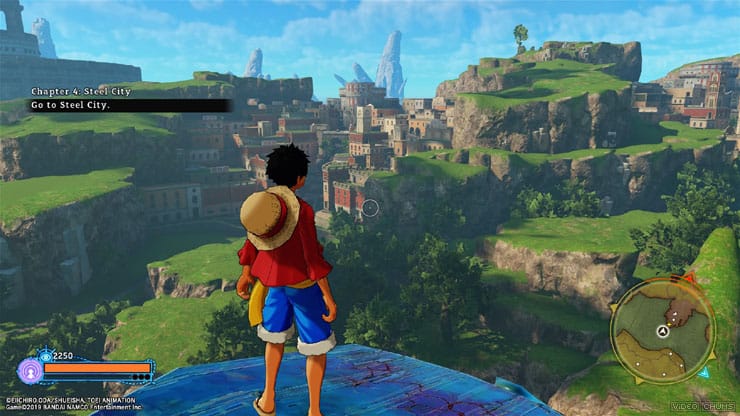 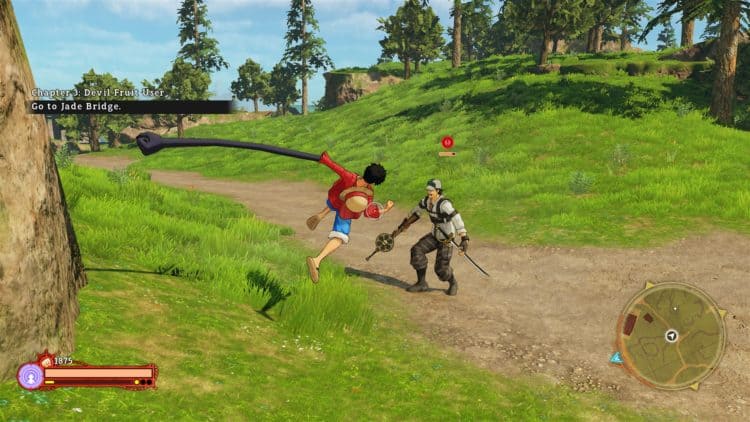 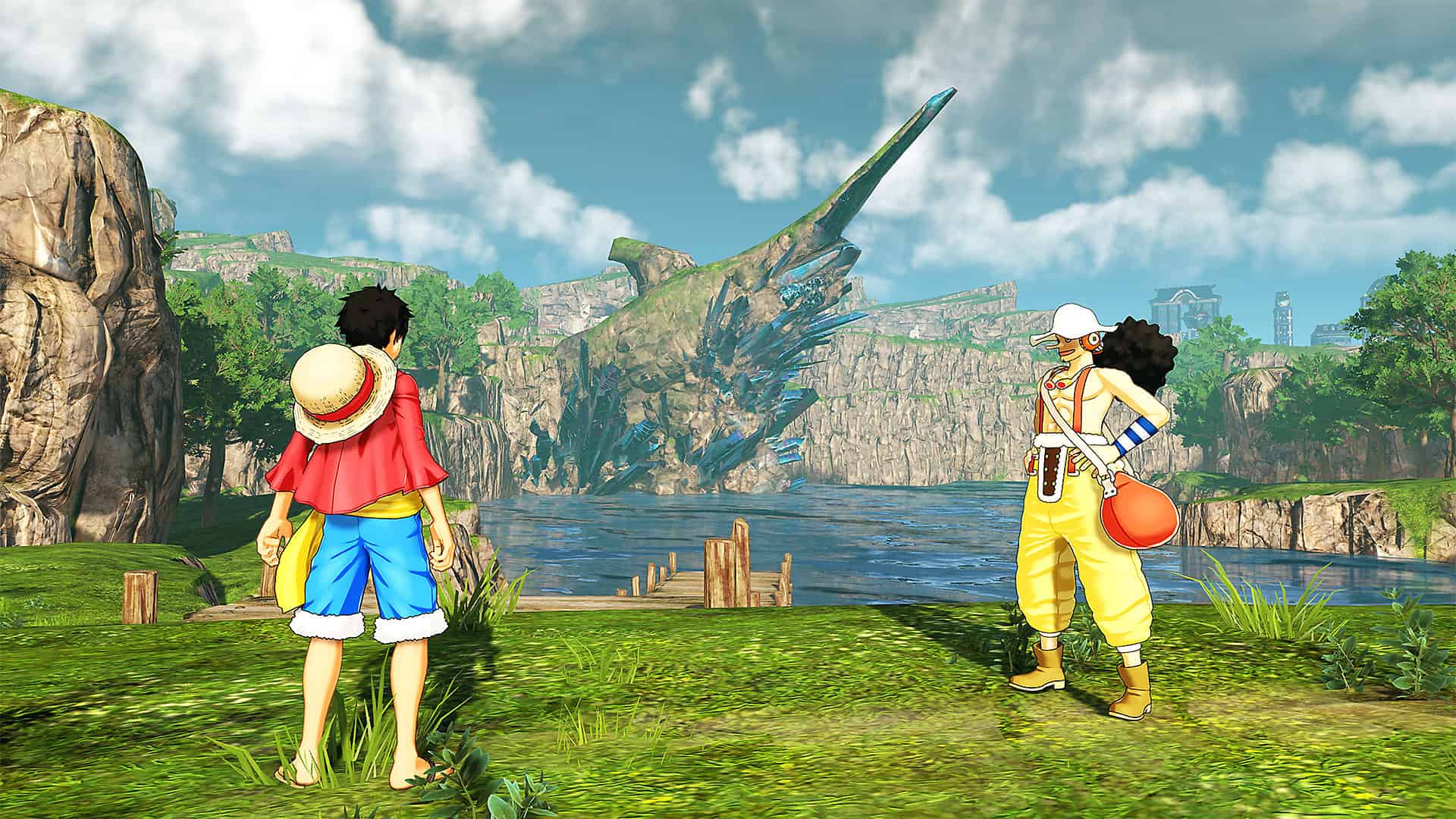 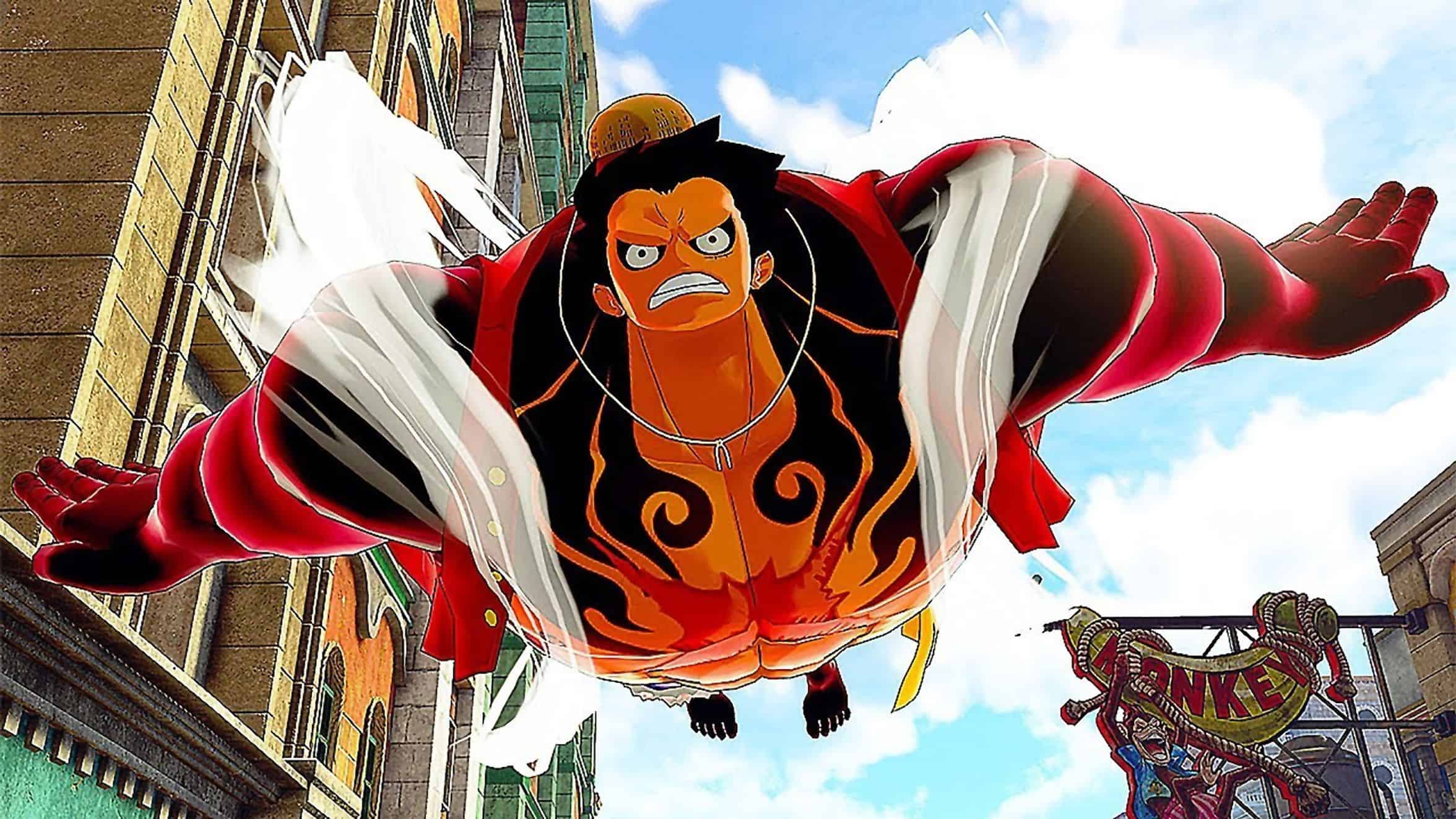 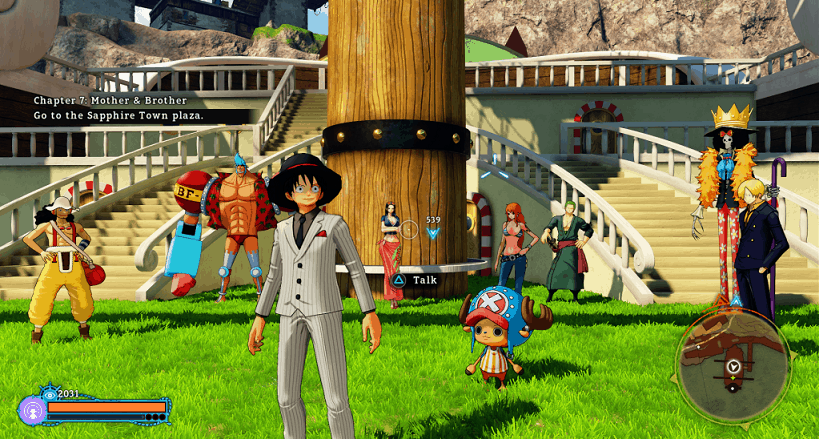 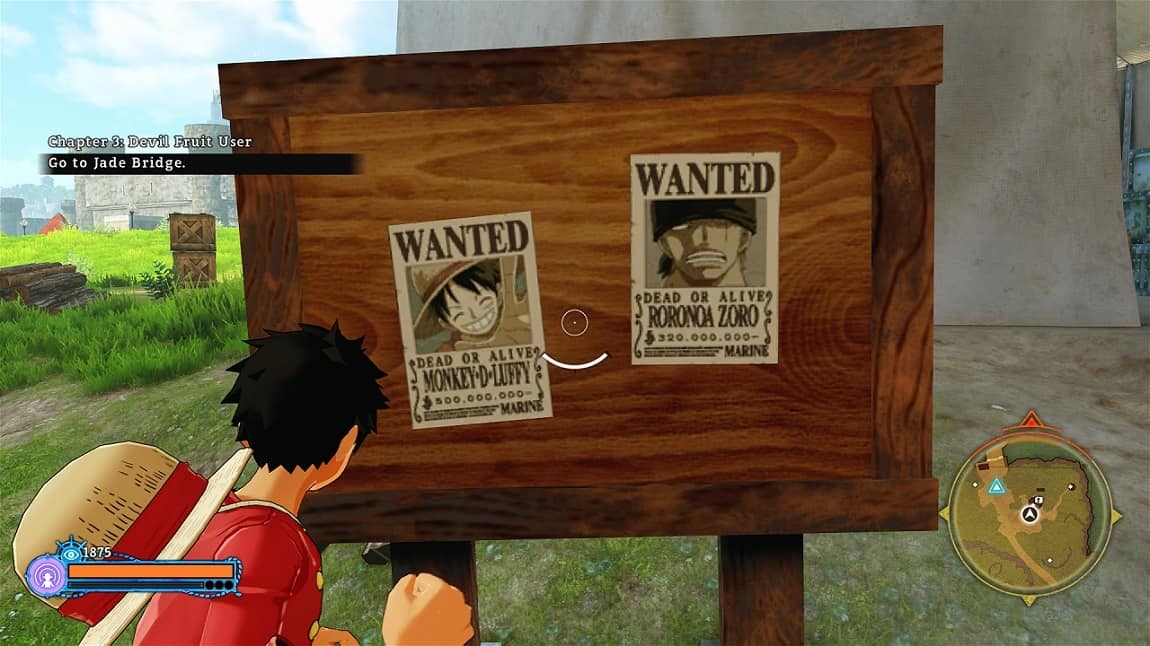 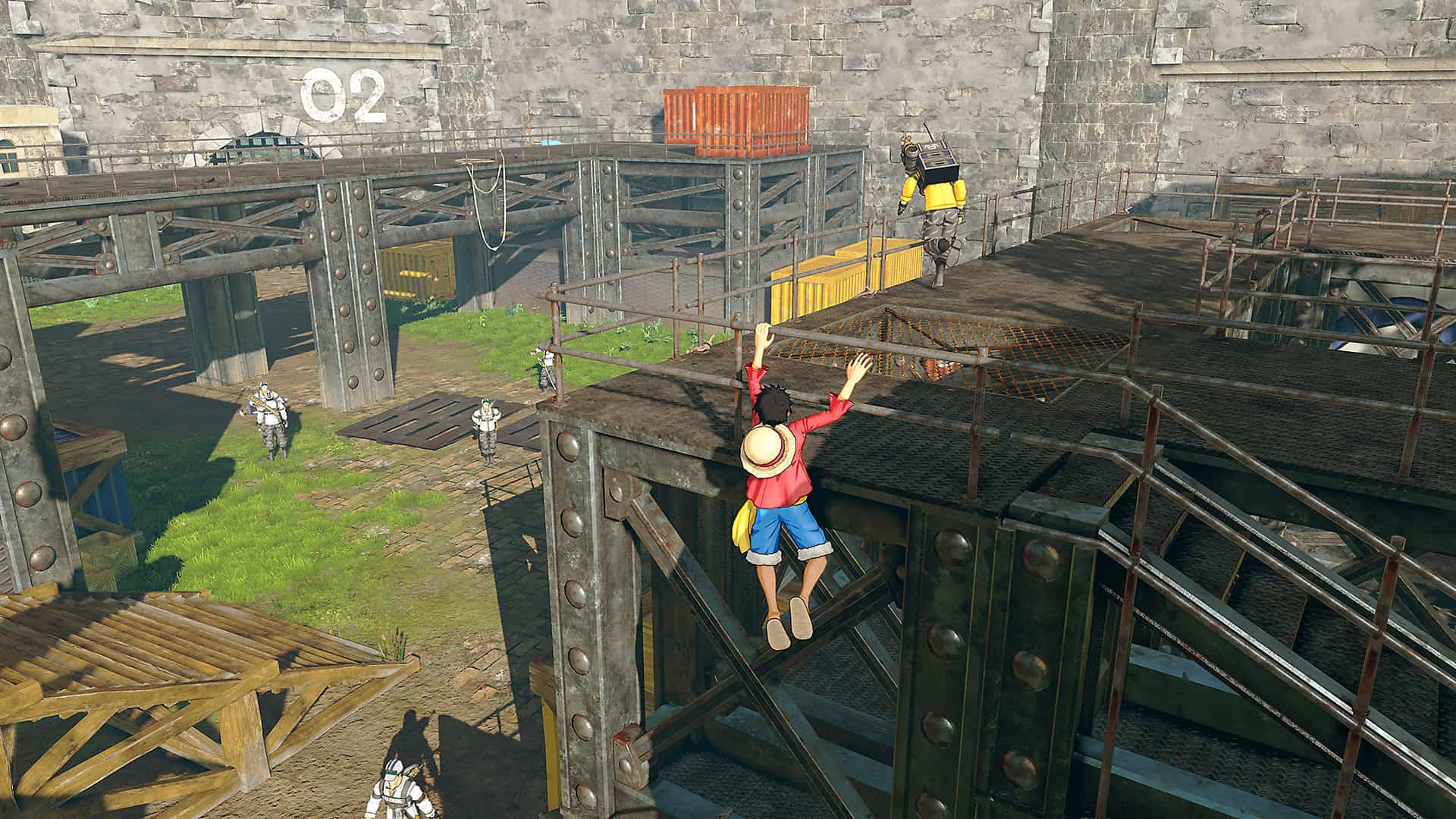 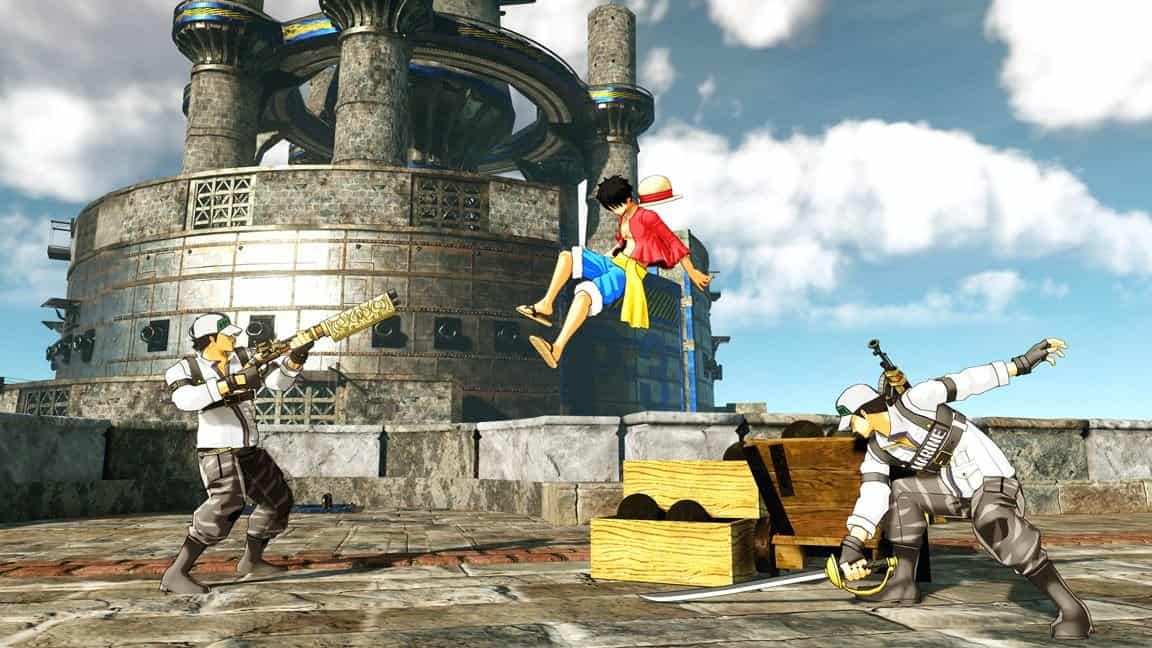 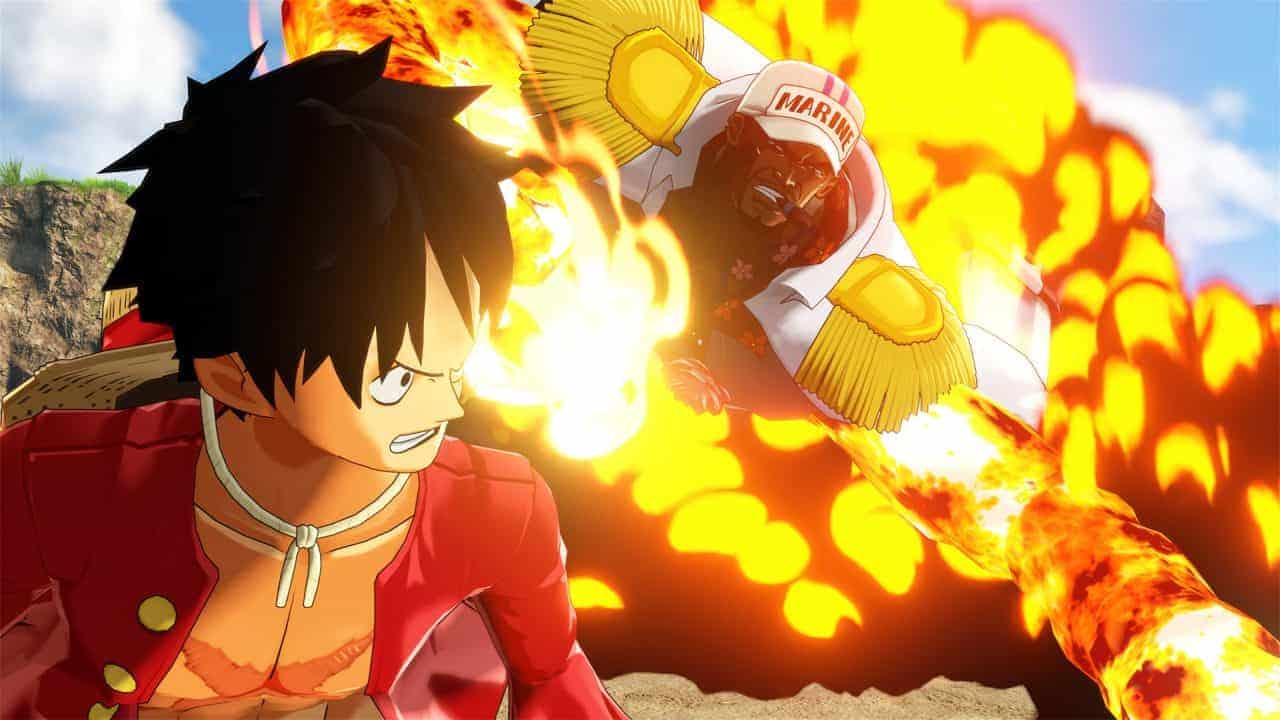 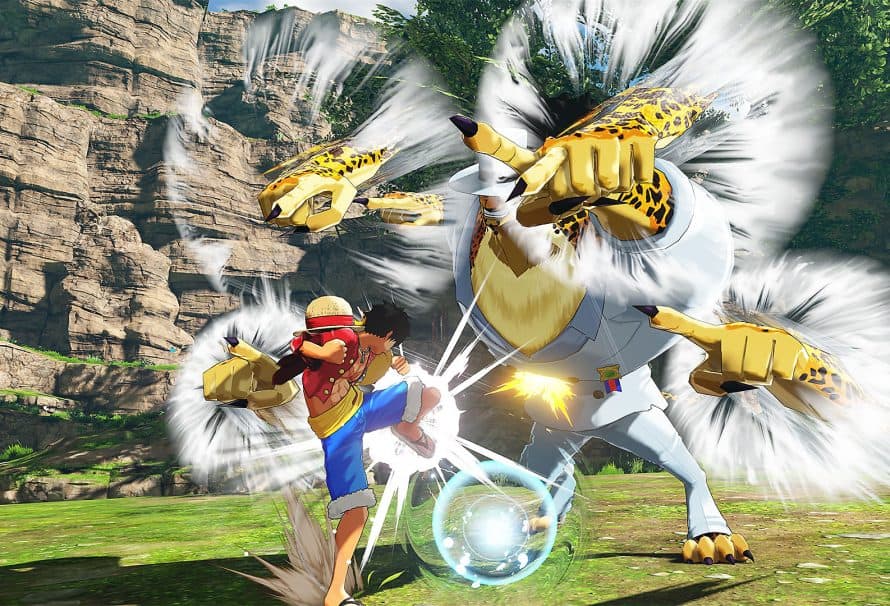 By upgrading Luffy I could improve both his stats as well as the type of attacks I could lay out on my foes. In Observation Haki mode I was able to move around faster and dodge an opponent’s attacks with relative ease, but lacked enough power to do serious damage. In Armament Haki mode, I traded speed for defence and raw power, granting me the strength required to deal some real damage. I was also able to unleash some flashy finishing moves that devastated any in my way, but found I had to time it just right, or I’d completely miss my intended target.

While the open was amazing to explore, there was very little in the way of non-player character interaction, or immersion. The larger towns and settlements felt uncharacteristically barren with mostly only enemies peppering the cities and towns. This cheapened the experience of the game, since One Piece is a series known for showing the island’s citizens in a much more involved capacity. Using stealth as a way to avoid foes was also fun in the beginning, but by the end became much more of a novelty since Luffy, strong as he is, really doesn’t need to hide. I felt this would have been more enjoyable experience, playing in stealth, as one of the other crew members, like for example “Cat Burglar” Nami.

Side quests and equipment crafting were an enjoyable distraction for the most part but weren’t necessary for moving the story ahead much. I did enjoy getting to see additional Straw Hat crew members but it just wasn’t engaging enough to keep me coming back.

One Piece: World Seeker has many flaws and while most I’ve already mentioned throughout there are still a few I’ve yet to cover. I mentioned, early on, that watching the opening cinematic felt like watching another episode of the series, but I failed to mention that there is still a whole of content that isn’t voiced and requires much reading. This, I felt was a missed opportunity to really immerse gamers into the world, as One Piece’s fantastic ensemble voice acting cast is amazing and their talents were underutilised. Many fans of the series would argue that this is a deal-breaker for such a game since its focus is on the story.

One Piece: World Seeker had me seeking a much more polished game by the end of my review. Its beautiful exterior and enjoyable story arc was just not enough to hide the hollow interior of unfinished gameplay mechanics, lifeless towns, and feelings of missed opportunities. That’s not to say that One Piece: World Seeker is a horrible game, on the contrary, it is still enjoyable to play – however anyone who was expecting a more fleshed out and polished experience will be sorely disappointed. For fans, World Seeker could still be worth checking out, but don’t be shocked if this game leaves you feeling a little underwhelmed.