Tom Clancy’s The Division was a successful foray into the looter shooter genre when it first launched three years ago. It was not without its problems, presenting a strong campaign that was held back by its bullet-sponge enemies and an endgame that took some serious tweaking for it to be truly memorable. As such, the absolute best version of the original wasn’t available until several months after launch, where it had gone through relevant quality of life changes and strong DLC additions to be the game it wanted to be. Now, The Division 2 is here, and somewhat shockingly, has taken the learnings, adapted, and come back with a game that is not only a brilliant sequel, but a genuine contender for being the absolute best game on the market in this genre. It’s thrilling, deep and has me hooked.

Set this time in Washington D.C., the world is still trying to recover after a virus swept the nation several months prior. Gangs have taken over the streets, and as a Division agent, you’re tasked with taking it back, creating a safe space for “the good guys” to gather resources and continue to rebuild civilisation. The Division 2 doesn’t do a lot with its interesting setup; lots of the cut-scenes are mostly talking heads doling out missions, but while the narrative isn’t central to your experience, it’s the world-building that will keep you engaged despite this.

Washington D.C. has been recreated 1:1, which is an amazing feat in and of itself. Not only have they mapped out the city perfectly, but key attractions and monuments are represented, not just as window dressing, but as actual locations you can visit and fight your way through. The White House is your main base of operations, but it’s a pleasure shooting your way through baddies in the Washington Monument, the local Planetarium, Grand Washington Hotel and much more. The sheer variety in each location is astounding, with plenty of love and care clearly providing a drastically superior setting to the snow-covered New York from the original.

Environments are lush and show overgrowth several months after the virus initially spread. Some wildlife roams the streets; it’s not uncommon to see a deer run from the sound of gunfire or to notice a stray raccoon sitting on a car munching away on something. There are still the remnants of Christmas decorations lingering in some areas, while small details like chainsaws abandoned mid-way through sawing through a tree and other scattered remains of a life once lived remind of the impact such a world-changing event could have. I kept noticing small touches all over the place that, along with Echo’s and audio files, told me more about the state of the city than a cut-scene ever could.

Weapons in The Division 2 all feel useful and different, whether you prefer a rifle, close-range shotgun or sniper for a more long-distance approach. The tactics required for each area are different, each set up with lots of cover options and interesting level designs that factor in verticality, meaning you’re always assessing the best options to take down foes. You’re also not left in the same area for long periods of time, so the fact that you’re always adapting to new styles of play makes every scenario refreshing and challenging.

Enemy tactics are equally varied, and cleverly, they’ve changed the amount of red (“weaker”) enemies that are in each mission, meaning that you’re not stuck emptying full clips of ammunition into enemies with gigantic health bars. That’s not to say that these enemies are slouches; they can still overrun you quite easily if you’re not paying attention. Certain attacks and grenades can knock you out of cover completely and they’re not afraid to sprint to a new position or attempt to flank you, which can result in you being taken down swiftly.

This is where the squad element of The Division 2 comes into play; yes, it can be played as a solo game, but it’s a much slower and more methodical experience when you don’t have anybody to back you up or revive you, especially during boss encounters. Skills are useful and easily unlockable, including stationary turrets, drones and homing grenades that can all be modified to be offensive or defensive (for healing and reviving). Finding good combinations of skills and shouting through the headset when repositioning against a large amount of enemies makes the minute-to-minute combat of the game slick, punchy and memorable, with plenty of close-call action movie moments to reflect upon after each mission satisfyingly concludes. 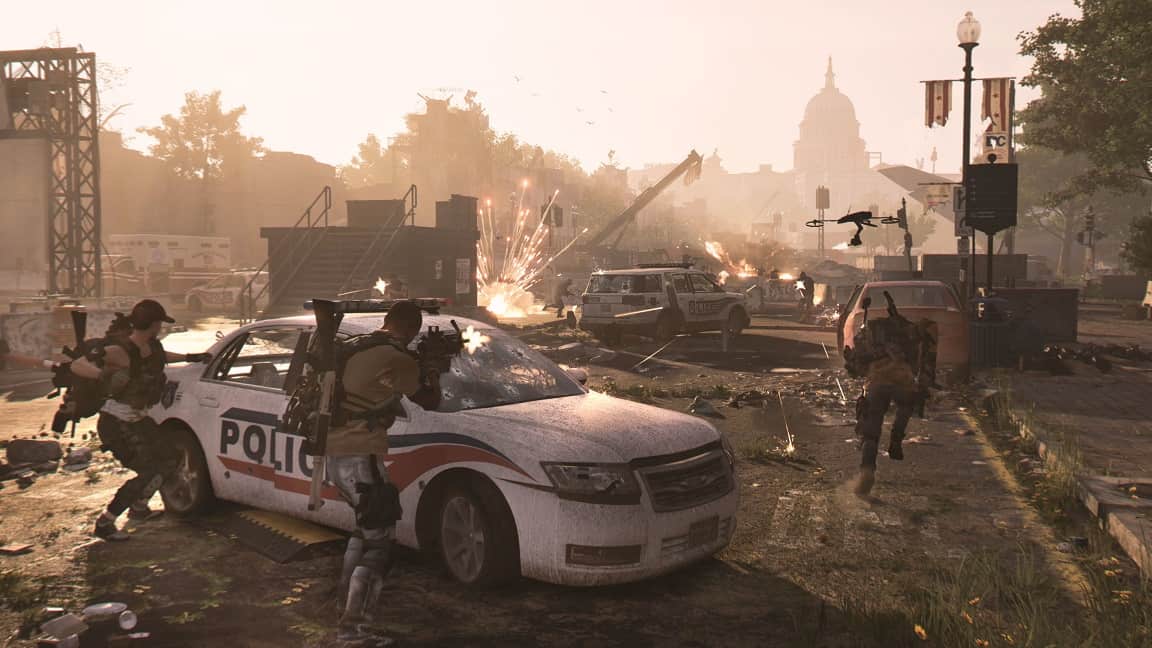 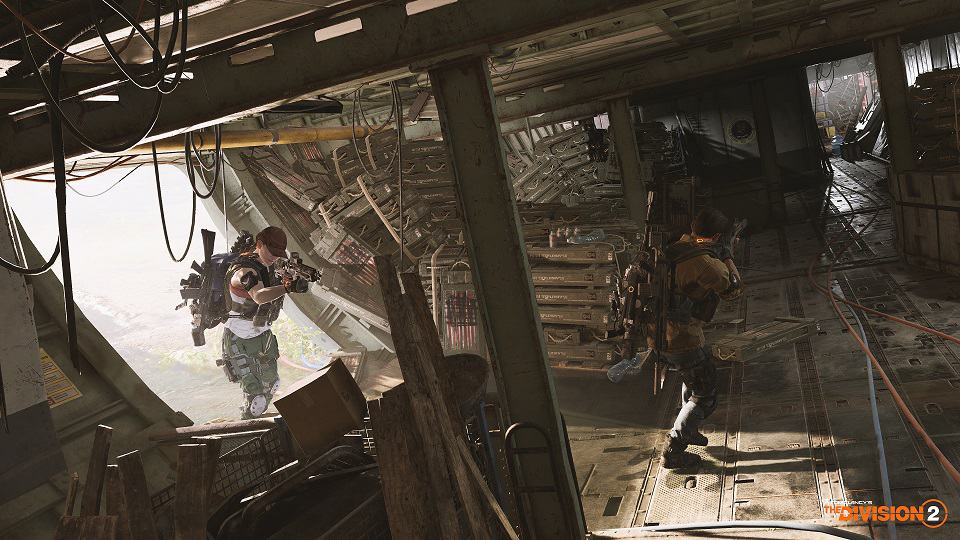 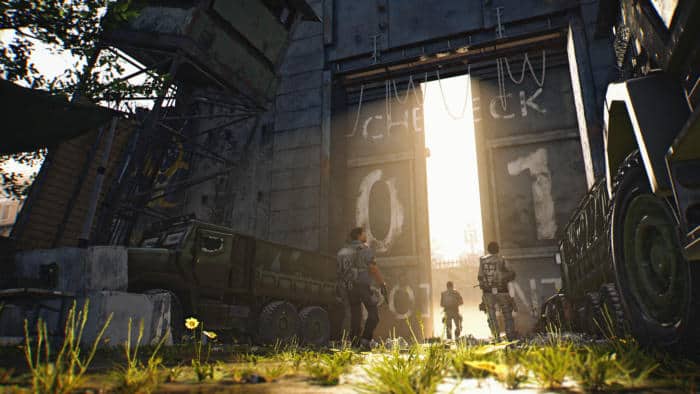 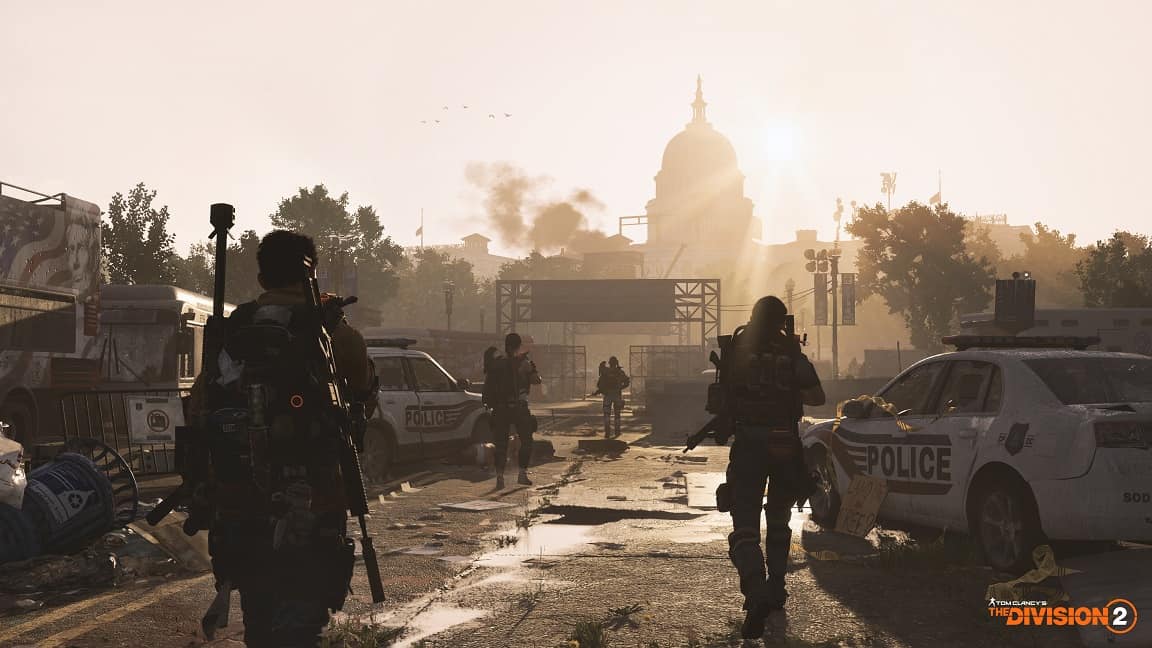 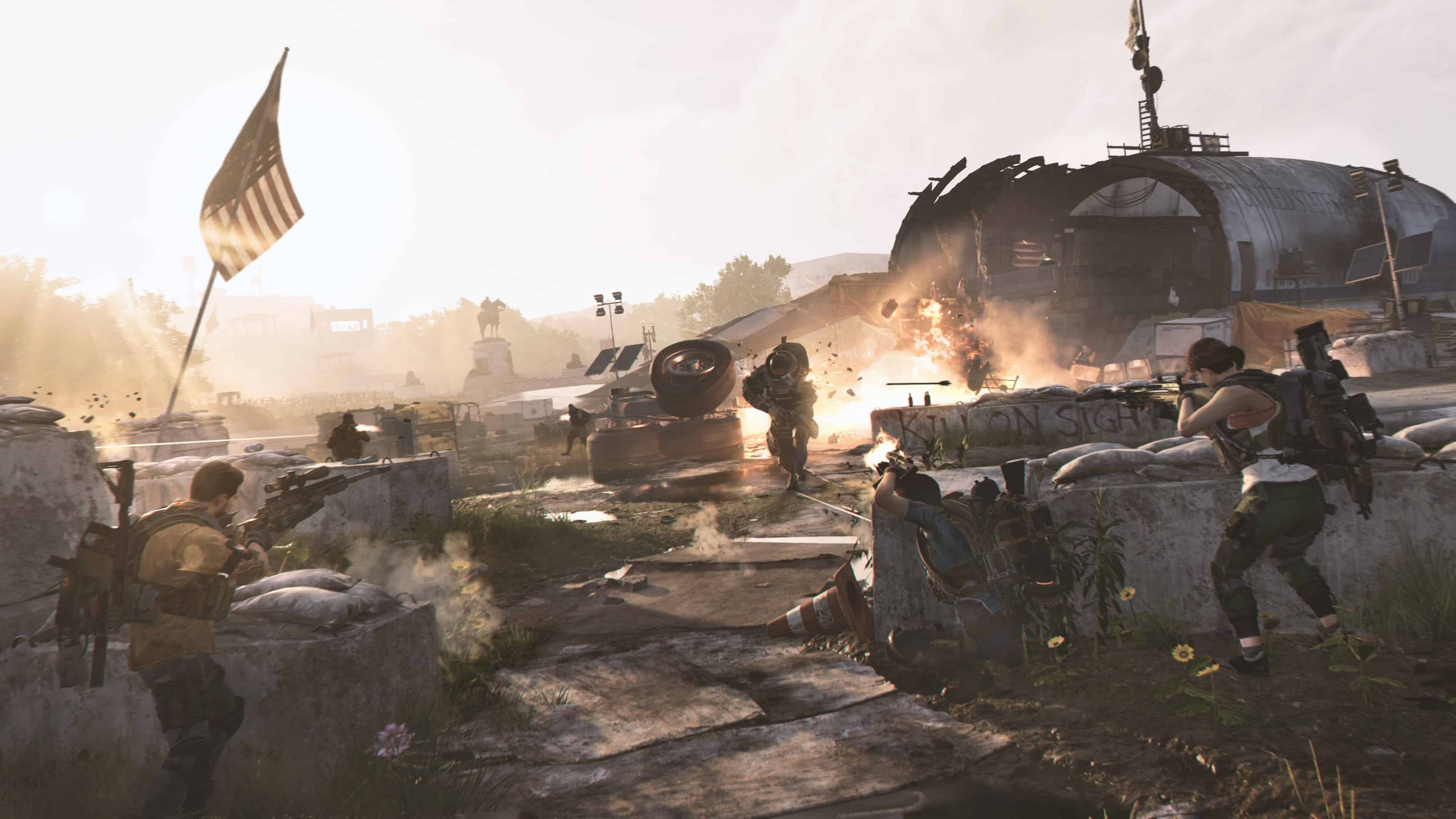 “Looter shooters” wouldn’t deserve that title if the gear you were gathering wasn’t exciting to collect or upgrade, and in The Division 2 the loot is glorious and plentiful. I was impressed with how often I stumbled into an alleyway or found a doorway into an accessible building that housed new weapons, better armour and other required resources. Even within missions themselves it can be worth checking corners and searching off the beaten path, as your curiosity is rewarded more often than not.

There’ s just so much to do in the game overall that it is a little overwhelming at first. You’ve got main missions which are all generously large in scope, plenty of side missions scattered across the map, settlements that need upgrading with your assistance through various projects, SHD cache’s to collect and random events occurring across the map. Then there’s control points which require you to take over and defend, totally worth acquiring for the supply rooms packed with loot and a fast travel point to cap it all off.

It’s a lot to take in, but after “clearing” the starting area of the game, I quickly fell into a rhythm of leveling up my agent by capturing control points, completing side missions and handing in projects before tackling the main mission and moving on. Hours went by feeling like mere minutes completing task after task, made all the more interesting by some of the themes that were presented throughout the experience. Much to my surprise, The Division 2 has some really dark moments that caught me off guard. I won’t spoil these for you in detail, but suffice to say the good guys don’t always win, which brings back the depressing post-virus reality of the world you’re living in. In direct contrast, some of the aforementioned museums have a true sense of fun and playfulness that lightens the experience somewhat. It’s a balance they’ve managed to pull off really successfully.

The Dark Zone returns in The Division 2 and is as stressful as ever, forcing you to find top tier loot and extract it from the most dangerous parts of the map before being overrun with AI enemies and other malicious players. It remains an intriguing mix of PvPvE, where nobody can really be trusted, but has been tweaked as well so that it’s not just one space on the map.

Three different Dark Zones (with different environments to boot) are now in play, a couple of which make sure that everybody shares the same power level to prevent more advanced players simply dominating newbies. There is still one  that doesn’t normalise stats for those who want to risk it, but I like that everybody is on an even playing field, as it rewards tactics over “time spent playing” in a way that is worthwhile. There’s also a traditional PvP mode featured here as well, which was only available as a DLC in the original.

Once you finish the campaign and hit level cap, it feels like a whole new game opens up in front of your eyes. The map that you spend so much time taking control over fills with a brand new threat known as the Black Tusk, missions that are modified and more difficult to complete, and the ongoing quest for exciting loot and improved gear continues after you’ve chosen your specialisation and received your associated shiny new power weapon.

The first thing that I really appreciated with the endgame that opens up is how The Division 2 makes a real effort to introduce this new faction, and they’re tough, with different technology and abilities that genuinely make replaying missions fun and exciting. They require different strategies and a lot more focus on teamwork and communication to take them down, and due to the size of the campaign, going through the same areas with a new focus has kept things exciting.

After leveling, it’s about completing main missions and strongholds while improving your gear score by collecting better equipment. Once you complete a stronghold, the World Tier can be changed to make even tougher enemies, better gear and harder difficulty settings as an option. There’s a methodical rhythm to how endgame is working so far that makes things enjoyable after over 50 hours of play, helped further by the skill trees that open up with your specialisations, inspiring you to complete projects and other side-quests in search of blue-prints.

As with any endgame in this genre, the proof will be not just how engaging The Division 2 becomes once you’ve hit World Tier 5 and complete all of the content available, leaving you to increase difficulty on existing missions and try to see how your squad fares against the absolute toughest enemies the game has to offer. There is a roadmap of content that Ubisoft has promised moving forward which certainly inspires a lot of confidence from me, as that will also keep players satiated moving forward. Overall, this is the most “complete package” video game launch I can think of when it comes to combining a lengthy campaign with a tantalising endgame that includes such meaningful progression.

More than anything, I’m just incredibly impressed with Tom Clancy’s The Division 2, so much so that I have to keep checking with other players to make sure I’m not just being a fanboy. The team at Massive Entertainment have not just slapped a new coat of paint on an existing franchise. They have taken the learnings from the original, along with community feedback, and applied it.

There is a gigantic, beautiful and captivating world to explore, even though it’s presented in such a state of disarray. Quality of life improvements are everywhere, polishing the core foundations. Multiplayer is incorporated super seamlessly, and there is a ridiculous endgame that will ensure fans will be playing this game for a long damn time. I know I will be.