The Princess Guide Review – We are not amused

The Princes Guide is an oddity. Part strategy, part visual novel, and part action RPG. The game feels like a mixed bag of mechanics, sown together in to the video game equivalent of Frankenstein’s Monster. There are parts to The Princess Guide that work well, and then there are others that just really don’t. The Princess Guide comes from Nippon Ichi Software, and follows your player generated character as they train four princesses to be the best princess that ever princessed. In your quest to make these girls the best they can be, you will traverse 4 separate islands and navigate multiple awkward situations as you play through one girl’s story mode before moving on to the next.

Gameplay is a mixed bag. Players will find themselves strategically moving troops across the world map one minute, and teaching class the next. The world map, and the ways you navigate it, remind me a lot of Final Fantasy Tactics Advance. But where you could only move one set of units around the map in FFTA, here you’ll be moving multiple squads around, like some sort of spiderweb chess, as you strive to complete your objectives and clear the board of enemies. Too often, clearing the board of enemies will be your only objective, which causes the gameplay to feel repetitive and grindy after long stretches of playtime. Often, I would have to put it down after half an hour or so, just to give myself a break from the game’s repetitive nature.

This is also hampered by the game’s almost unwieldy battle system. At first it seems overwhelming, with so many different button commands to memorise. Add to this the fact you are expected to learn and master the battle system all in one hit during the game’s tutorial prologue, and it all starts to feel like a bridge too far. Trying to remember which shoulder button does what, and how to activate your ultimates, becomes a game of ‘guess the input’. The system seems to be one that takes time to master. More patient players will eventually find their efforts rewarded. Although those who are more impulsive and fidgety, like me, may find nothing but frustration with the combat mechanics. It doesn’t matter how many times I looked at the controller layout, commands got quickly forgotten in the heat of combat, and I found myself resulting to button mashing 95% percent of the time.

With Combat making up most of the gameplay, this quickly became a problem. You can begin to feel the tedious nature of The Princess Guide after long periods, and the combat plays a large role in that. The battle arenas feel uninspired and suffer from the repeated use of the same assets and objectives. Even when you change storylines, the arenas feel recycled, with just a different coat of paint slapped over the top. More often than not, the goal will be to clear as you encounter wave after wave of enemies, often following the same pattern of small mooks, medium mooks, heavy mooks, and then a big bad. This repetitive structure feeds into the monotonous grind I encountered during long play sessions.

The princesses training section is not much better. It revolves around you selecting an ideal or piece of knowledge for the princess to learn and then scolding or praising the little queenlet enough times until they “learn their lesson”. The problem I noticed with this system was there is very little difference mechanically between scolding and praising the girls. This means you can scold the girls throughout the game and still have them level up and improve, making this game less about raising competent future rulers, and more about bullying little girls into submission. 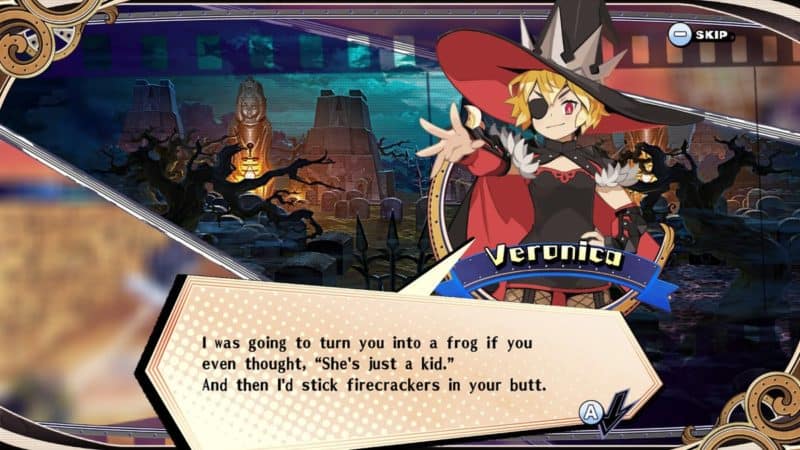 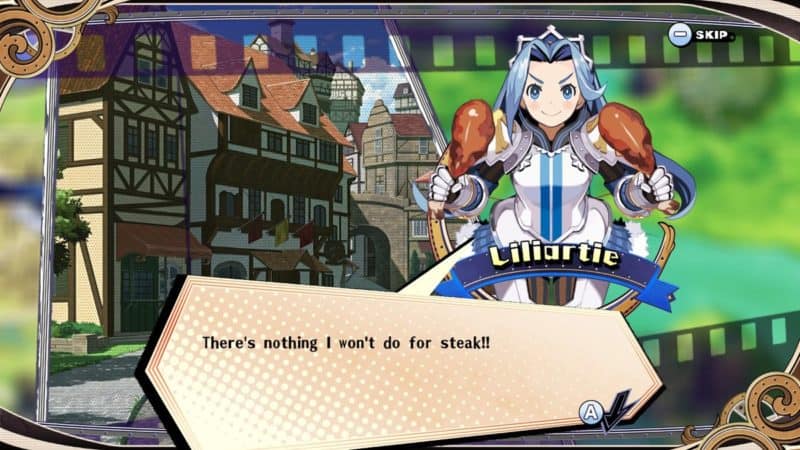 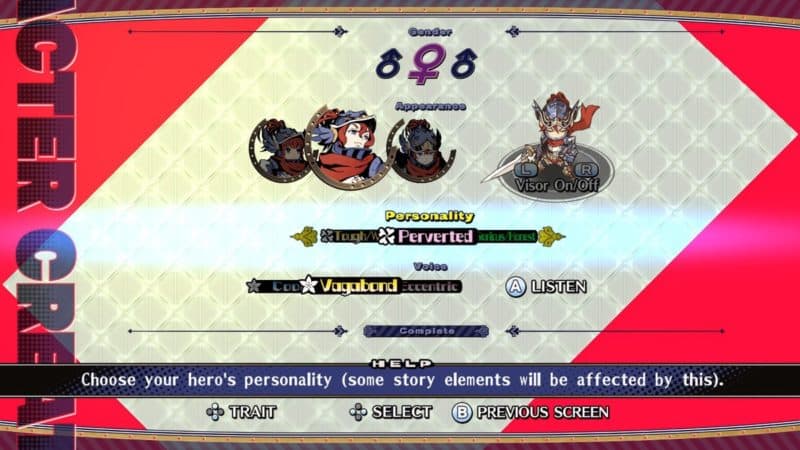 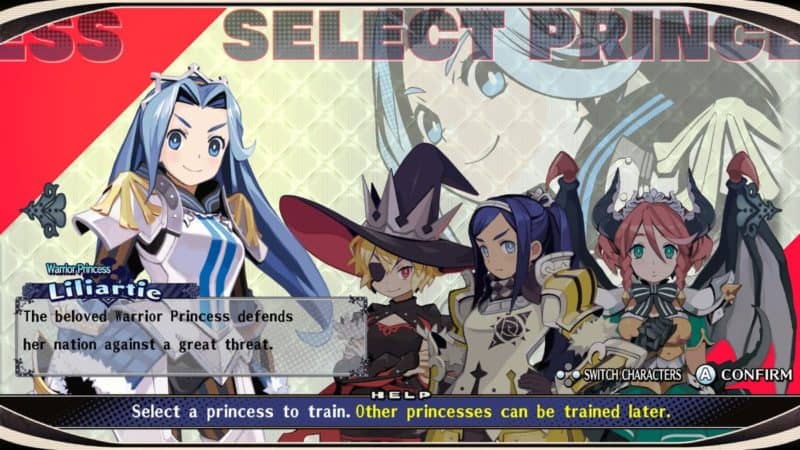 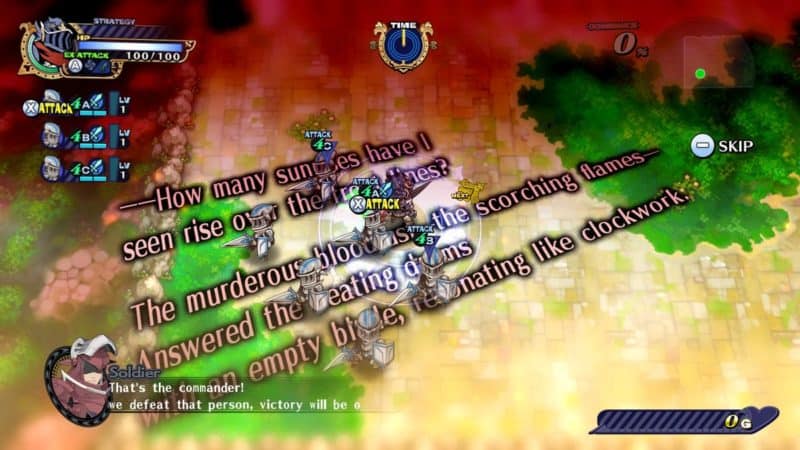 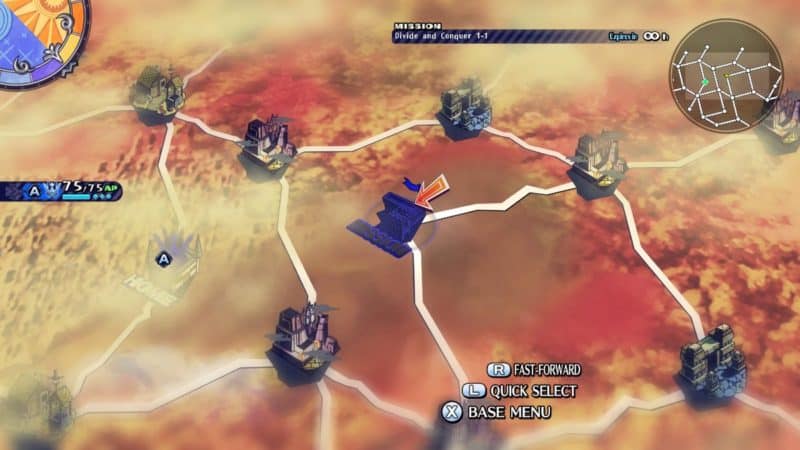 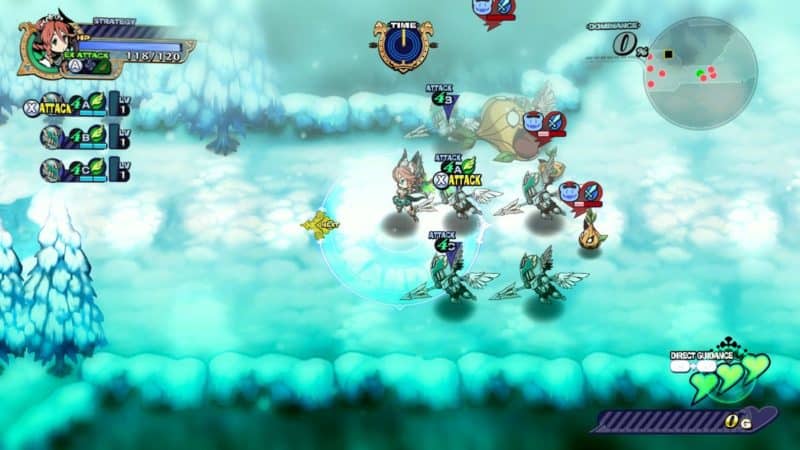 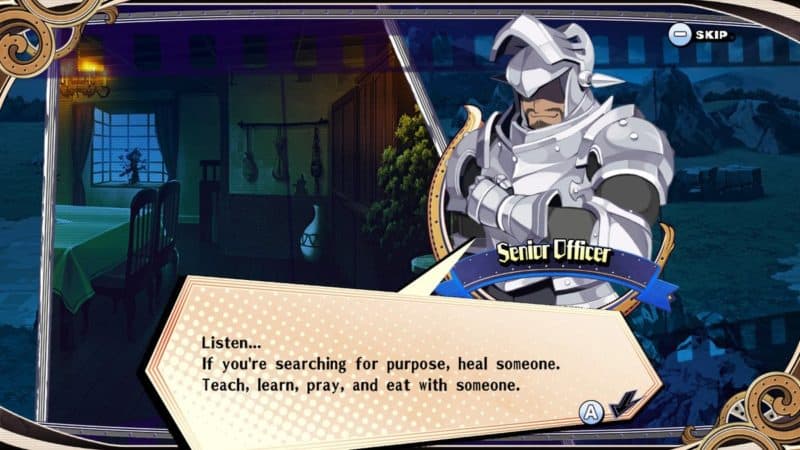 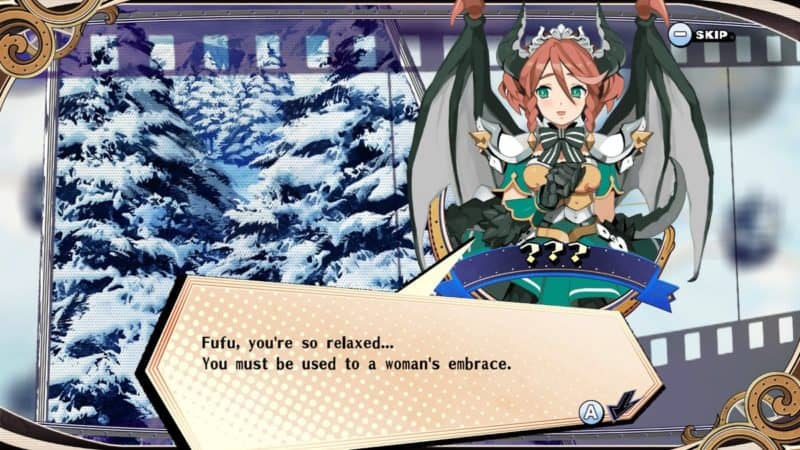 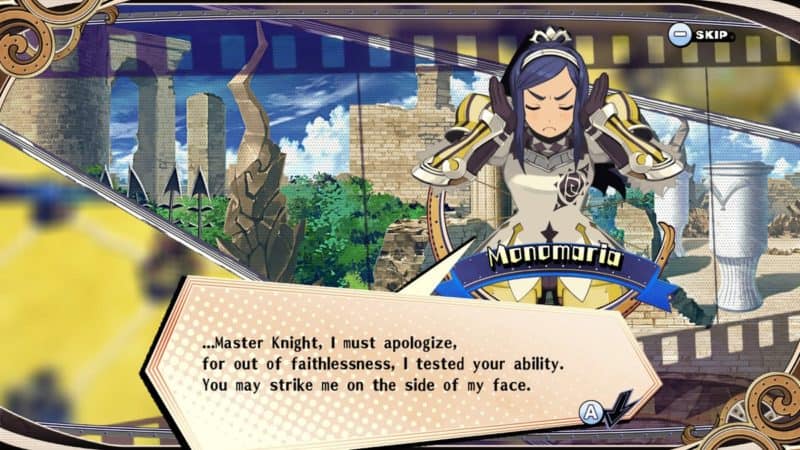 There’s also a strange visual design to the game. Menus feel busy and over-stimulating, full of moving backgrounds and cursors. The cutscenes are all framed with the dutch angle film reel effect that detracts from what’s happening onscreen. This clashes with the game’s ye olde fantasy aesthetic and makes the visual style feel like a forgotten afterthought. The character animations move rapidly when characters talk. It’s so jittery and quick that it makes me wonder if the entire cartoon cast is hopped up on energy drinks and amphetamines. Overall, I feel like the visuals lack direction. There’s no cohesion between any of the visual parts of this game apart from the “whacky anime” aesthetic.

The game’s weakest point though is its characterisation and storytelling. The four main princesses feel more like caricatures than actual characters. Their personalities are constructed around a sole anime trope. The blue princess is a food obsessed layabout, the yellow an overeager masochist, the green princess is a pure and delicate maiden turned secret pervert, and the red princess is a straight up sadist. At one point, early into the red princess’ storyline, the princess casually joked about turning me into a frog and violating me with a firecracker. The yellow princess also later asked me to beat her with a blunt object because she felt she must be punished. It was at that point I knew that this game and I were going to have issues.

Every other character outside of these four are even more poorly defined. The villains are cartoonishly evil, with their plots and plans being so outlandish, it’s a wonder they don’t just walk around with signs that say “I’m the bad guy”. The rest of the cast are nothing but faceless NPCs despite many of them playing prominent roles in the storylines. They’re left nameless, continually referred to by descriptors like “Old Man” and “Young Mage”, leading me to wonder if these kingdoms are filled with hordes of geriatrics that all just dress the same. This is just the tip of the iceberg when it comes to writing, with a series of storylines that could be called a loose collection of tropes more than a cohesive narrative.

In short, The Princess Guide is for a particular kind of gamer. One who can look past the game’s numerous flaws to find the fun hidden away. And the fun is there, if you are willing to look. Despite the tedious, repetitive and monotonous gameplay, there were moments I found myself having a good time. Those moments were few and far between though, with most of the enjoyment being drowned out by poor mechanics, bad visual design, and terrible writing. If you’re willing to really put in the hours and can see past the schlock, then you may find yourself with a fun little pick up and play romp. As for me, this game was nothing but a royal pain.