Sekiro: Shadow’s Die Twice is following a legacy of phenomenal hardcore action RPGs from developer FromSoftware. This is a studio that has well and truly found their niche. They’re managing to not only impress gamers time and time again with every new release, but they’ve also single-handedly invented a new genre of games. It’s an incredible feat in the modern gaming world and one that proves how influential this team have become.

With that legacy in mind, it becomes even more important that Sekiro continues the trend that was started with the Demon’s Souls, Dark Souls and Bloodborne franchises. After spending way too many hours dying in this game, I can safely say that it does.

Sekiro is the furthest departure from the ‘Souls’ formula we have seen so far from FromSoftware. Don’t get me wrong there are plenty of similarities, although Sekiro isn’t afraid to stray from the well-trodden path and begin cementing its own unique identity. First and foremost the game handles its narrative differently. Sekiro is very upfront and traditional in its story telling techniques, unlike past FromSoftware games whose narratives can only be deciphered by an advanced team of cryptically-minded researchers.

You play as a lone wolf during the war-torn Sengoku period of Japan. You’re tasked with protecting the young Divine Heir but end up losing the boy and one of your arms during the opening sequences of the game. Sekiro will take you on a journey to get the Heir back in your protection, get revenge and begin understanding and hopefully curing a terrible but miraculous disease known as DragonRot.

The narrative is well told and the Japanese voice cast do a great job of selling the urgency and power that comes with the game’s plot. However, I don’t think people are jumping in to a FromSoftware game for the narrative… we’d better start talking gameplay.

Sekiro: Shadows Die Twice still retains the incredible difficulty and hack n’ slash gameplay popularised in the Souls games. Although the formula has been well and truly shaken up, so many of the strategies you’ve become accustomed to will need to be adapted. Gone is your stamina bar and in its place is a poise metre that needs to be whittled down before you can land the final blow. Much of the gameplay involves telegraphing enemy attack patterns and reacting appropriately whilst peppering in your own attacks. Deflecting enemy attacks becomes a big part of the game and helps greatly in reducing your enemies poise, but with a perfectly timed block required it comes at a great risk.

Sekiro actually feels like the most challenging of the SoulsBorne games. I’ve always praised the Souls series because the games empower you to play better and better and your progression isn’t based on finding better equipment or leveling up as much as it is about improving your skills and learning. Sekiro excels in this regard and it makes you feel so good when you’re able to overcome an obstacle that initially felt impossible. The poise system works fantastically as well, with Sekiro feeling like a complete rejuvenation of the Souls formula.

“It’s a mechanic that gives you a fighting chance against what would otherwise be an insanely oppressive and near impossible experience.”

Sekiro allows you to resurrect after death, hence the title “die twice”. It’s a mechanic that gives you a fighting chance against what would otherwise be an insanely oppressive and near impossible experience. Likewise, most of the bosses you encounter will have multiple lives or phases that you’ll have to overcome in order to achieve victory. Sekiro focuses pretty hard on these boss fights, with significantly more bosses than your average SoulsBorne game. The fights are all fairly unique and interesting with a few absolute standouts, although these boss fights do slow progression pretty drastically. On countless occasions I’ve been losing to particular bosses on a loop, continuously respawning, trying again, and getting my ass handed to me. Winning feels amazing, of course, although refocusing the game less on boss fights and more on interesting and challenging sections of traditional gameplay would have helped keep things progressing at a more natural pace.

Death in Sekiro: Shadows Die Twice comes at a fairly sizable cost although not anything too debilitating. You’ll lose half of the currency your holding with no opportunity to reclaim it. A new ‘rot’ mechanic has also been introduced that will be difficult to discuss without spoiling too much of the game. However it’s a mechanic that appears quite divisive amongst many gamers. Personally I love the in-world explanation for rot and the ramifications that rot has on Sekiro’s narrative. As a gameplay mechanic it does eventually feel quite inconsequential once you understand how to overcome the disease which is a bit of a shame. The game had me feeling guilty for my actions and overly cautious not to die at one point, but that went straight out of the window once I was able to fight back against the disease. 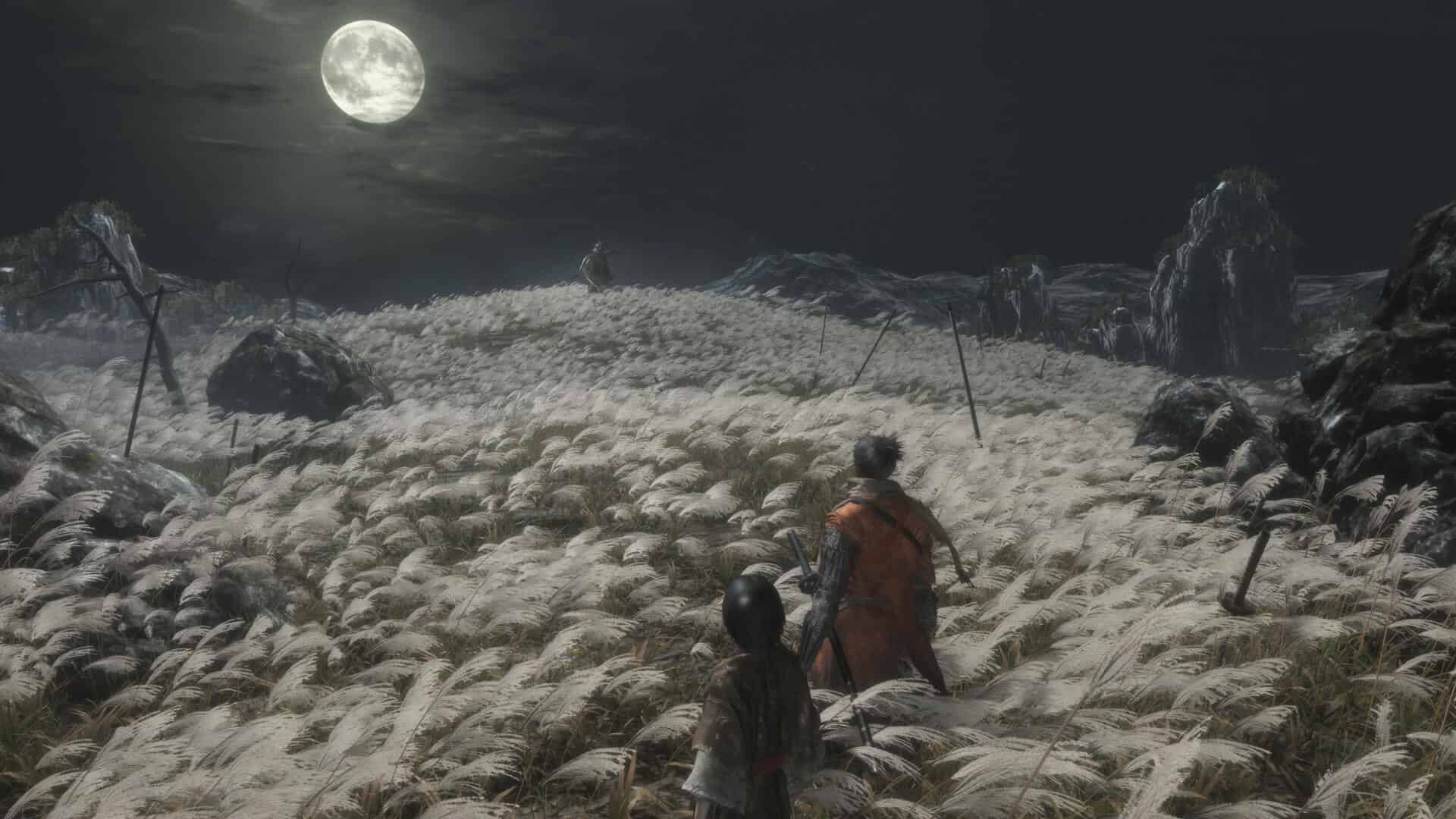 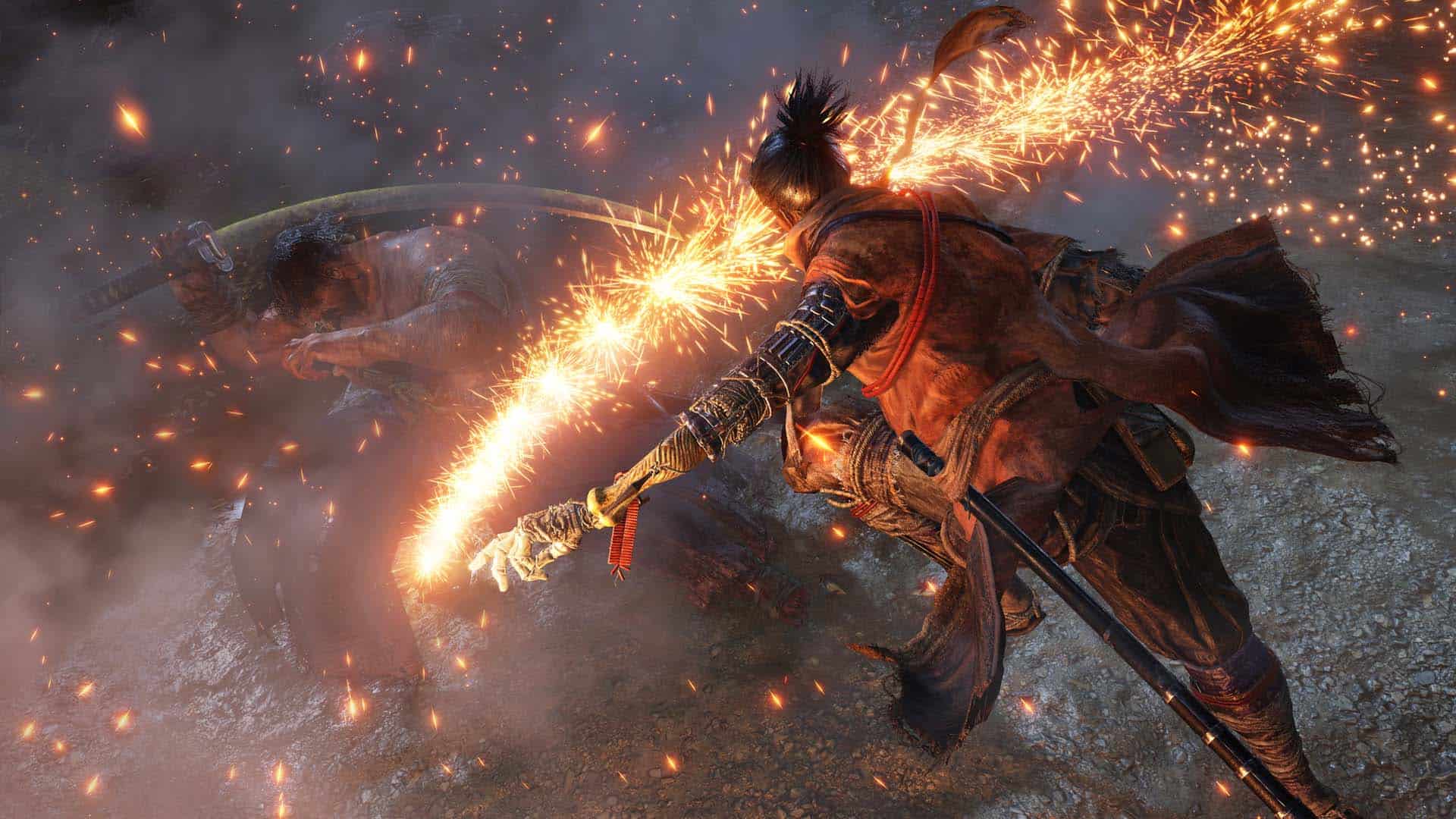 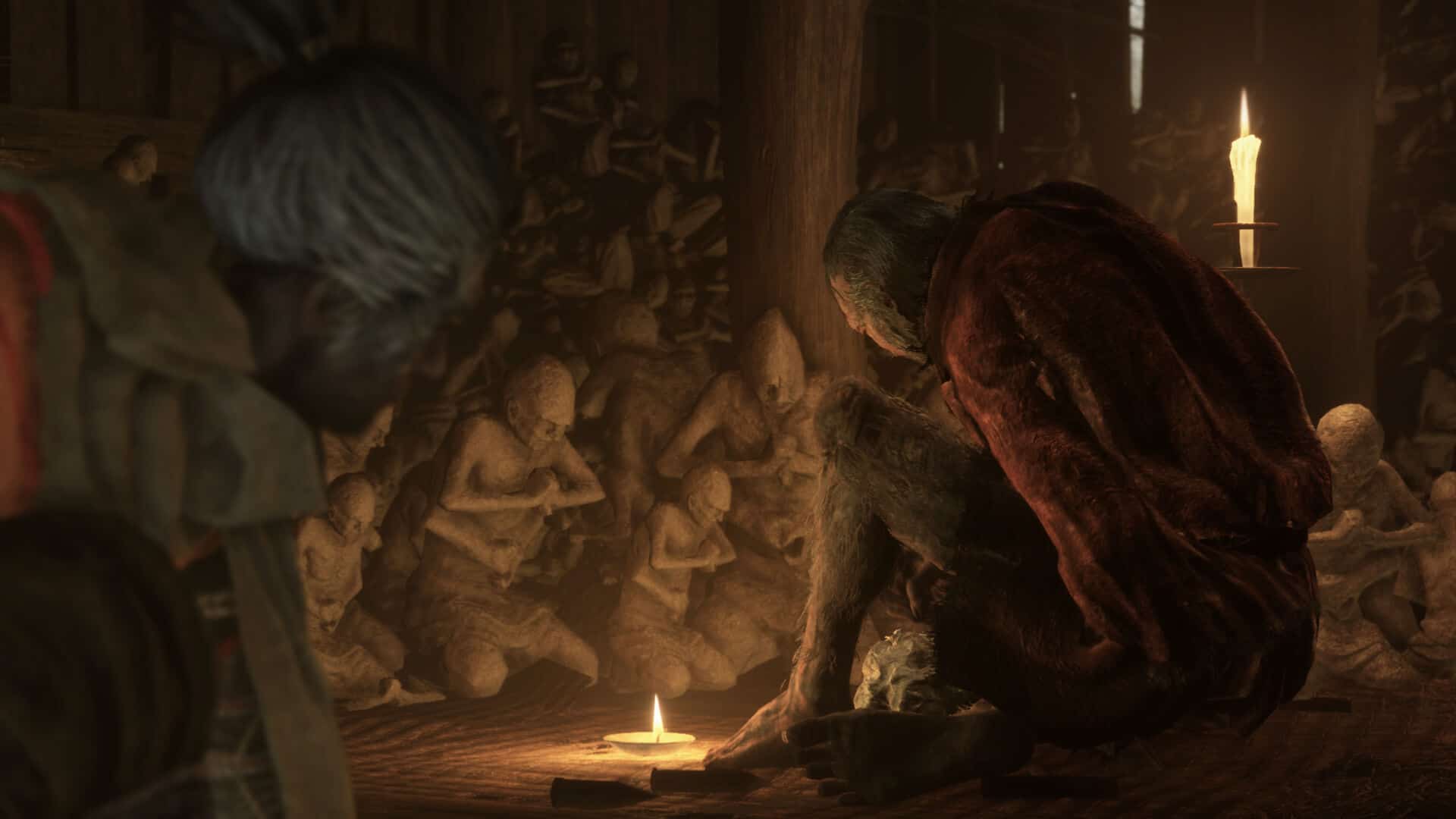 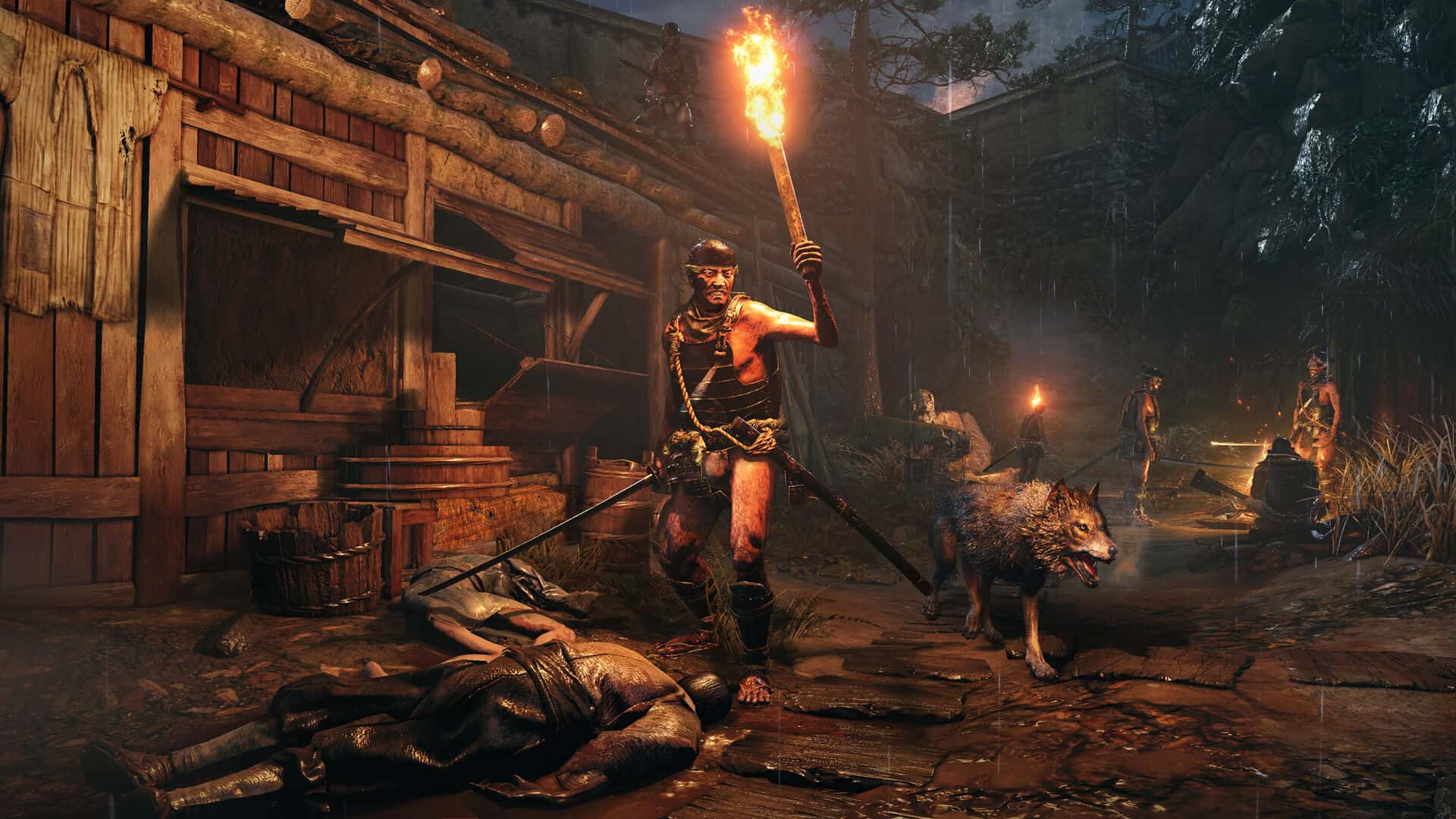 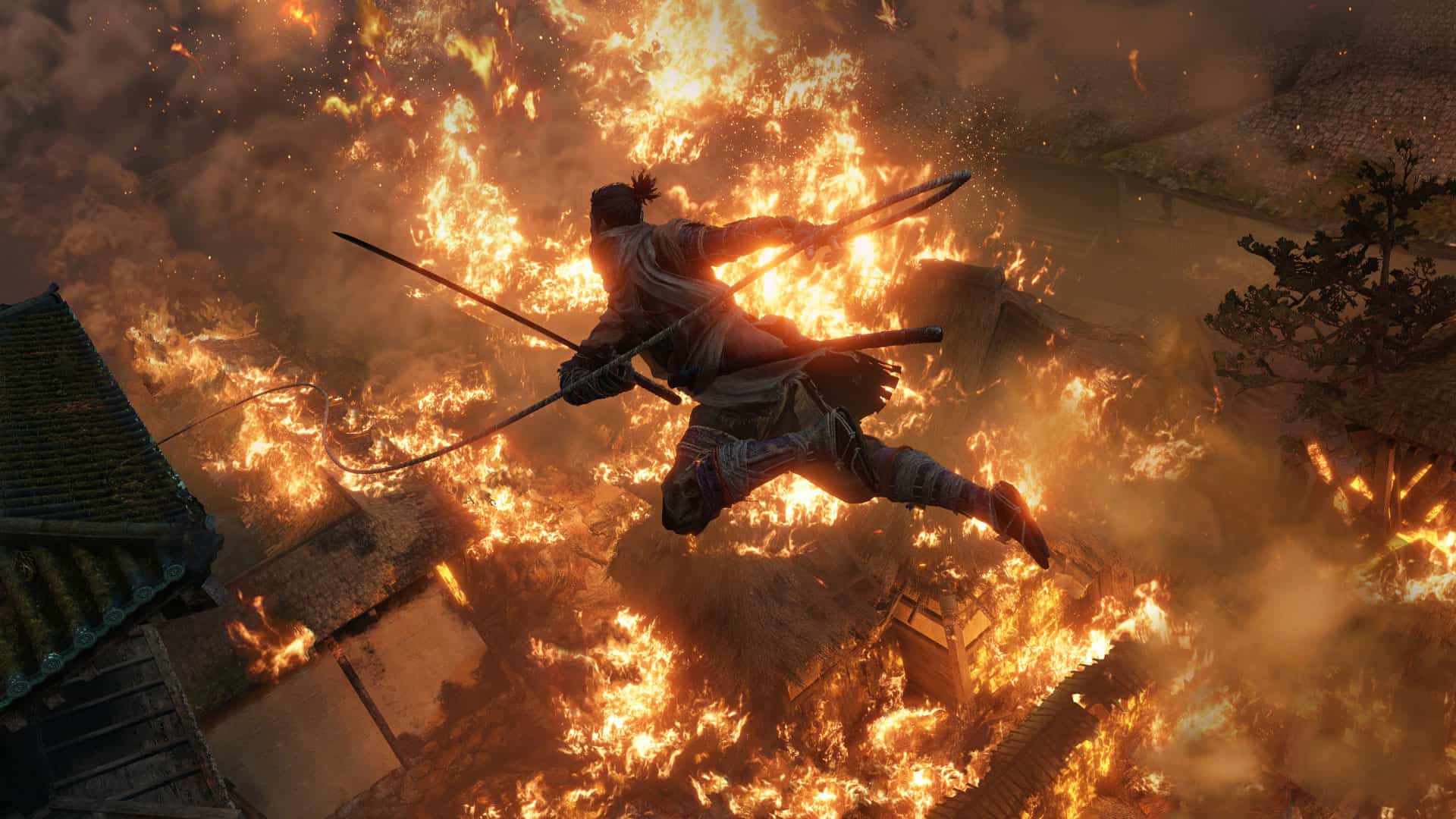 A grappling hook is a big part of Sekiro which helps the game achieve a sense of verticality and create some joy to the traversal. It works beautifully and is a core component to some of the boss fights. A skill tree is available for you to progress through, helping you unlock powerful passive abilities and active attacks known as Combat Arts that allow you to perform impressive sweeps, leaps and slashes. You also have a prosthetic arm that can be upgraded with amazing tools such as a shuriken for long distance engagements or firecrackers to help startle your foe. Items can be found in the world that can also help you in battle and a special “Ninjutsu” category of abilities can be unlocked granting you powerful skills such as turning your enemy into a puppet who fights alongside you. All in all its a very diverse and adaptive system that keeps combat fresh and engaging. Every enemy that has ever caused grief can be dealt with by a smart combination of the tools at your disposal.

Stealth is also a big part of the game and something you’re going to want to utilise to your advantage. It plays a big role in helping you to secure instant kills on otherwise challenging foes as you sneak up behind them or drop down from above.

All in all, Sekiro is just a very satisfying game. I think we have to give FromSoftware props for evolving a formula and making a product that feels so familiar yet so new at the same time. Sekiro: Shadows Die Twice scratches the Souls itch but does so with some uniqueness and refreshing ideas. This game is not for the feint of heart however. It is brutally challenging and a game that will cause frustration more than joy from less patient gamers. Know what you are getting into, because Sekiro: Shadows Die Twice is a game for a dedicated subsection of the wider gaming world. Although for those brave enough to venture into the world of Sekiro, there is some incredible things for you to discover.