SteamWorld Quest Review – A cut above the rest

Image & Form Games released one of my favourite indie games back in 2017, SteamWorld Dig 2. This game had a simple look but utilised some deep mechanics and always had me pushing just that little bit further to mine for more and more minerals. I fell in love with the world and characters and I am happy to say that Image& Form have once again knocked it out of the park with SteamWorld Quest.

I was not quite sure what to expect when first launching SteamWorld Quest on my Nintendo Switch, but I can safely confirm that this game certainly took me by surprise, in a good way. It proved to be an addicting and enthralling experience from start to finish that I simply could not put down.

SteamWorld Quest mixes a narrative driven  roleplaying experience with tactical trading card gameplay. You initially play as Armilly and Copernica who are on a small errand to collect a mushroom sample. But this mundane quest doesn’t take long to turn into an epic adventure to rescue a noble guild of town heroes and has you quickly adding more members to your party to aid in the ever-expanding adventure at hand.

The way in which the story unfolds and characters interact took me right back to my days of playing Banjo-Kazooie as the characters speak with a delightful mumble of gibberish-like sound effects, leaving the story and dialogue to be conveyed almost entirely within text boxes.  I am not usually a fan of strictly written dialogue in games, but SteamWorld Quest’s characters have such a  magical and loveable charm to them, and the writing is so witty and humorous that I genuinely couldn’t wait for the next character interaction to see what kind of dry humour would be delivered. This game actually got a few chuckles out of me at times, and the writers need to be applauded for their efforts in crafting an immersive and interesting story that kept my attention.

One of my favourite in-game jokes was when you first meet the shopkeeper, who sells a variety of upgrades and items. Armilly first questions the shopkeeper, asking if they are just going to hand out another routine quest, to which the shopkeeper simply replies “I am just the shopkeeper”. I found this to be a fun nod to many other games where it seems almost every interactable character has a mundane quest or task to hand out.

The graphics have a unique 2.5D hand-drawn cartoon aesthetic to them and are a thing of simplistic beauty to look at, with the characters and enemies all having varied and unique steampunk designs utilising various mechanical components and cogs that bring these characters alive and imbue them all with varied and likeable personalities. You move the characters around the overworld map of sectioned off square/rectangular areas, where the enemies are visible and all connected via pathways and ladders.

The gameplay primarily utilises a turn-based battle card system, something I am not normally a fan of. Although in this game the concepts are simple enough to understand yet hard enough to master which left me enjoying each and every battle and really planning out each move I made.

You can select a party of 3 characters to use in battle, with each character having a relatively small pool of their own unique 8 cards within their deck, that can be swapped out and changed over the course of the game to find a set that best suits your style.

The small deck size may sound restrictive, but in practice makes for quite an intricate system as each character has a different role to play, such as being a mage, a physical damage dealer, or being a support-based character, with their specific cards based around their character’s traits. You have a few different cards at your disposal, ranging from basic physical attacks to magical element based attacks and party buffs, to healing cards. The beauty of this system is the ‘Steam Pressure’ mechanic (pun intended) that builds up when you use weaker basic cards, and will then allow you to use more powerful cards that will each require a portion of the steam gauge to play.

This creates a wonderful balance of playing basic cards and weighing up which of your more powerful cards to play and how much of your steam gauge you will use, as being left with no steam gauge and a handful of cards requiring it can be quite a punishing experience. You are able to send back and redraw up to 2 cards per turn though, but this will by no means save you if you plan out your cards and actions poorly. 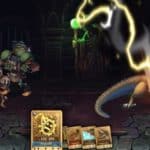 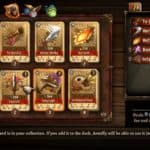 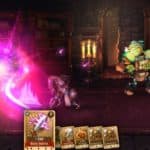 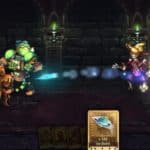 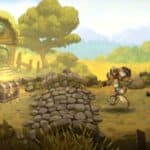 This system gets even more intricate once you are able to utilise the ‘HeroChain’ mechanic, which will grant you a specific bonus move if all three of the cards played in a single turn are related to that one hero, which can often lead to devastating consequences for your foes. The battles will certainly take their toll on your hero’s health, which must be monitored carefully. Aside from specific healing cards and healing potions, the only way to fully restore your party’s health is to use a ‘Hero Statue’, which will not only heal your party fully but will also respawn all the previously defeated enemies on the map, à la Dark Souls.

The accompanying music during battles utilises a unique mixture of orchestral instruments (including flutes and a lute) and guitar heavy riffs that only serve to add another fantastic layer to an already superb game. Furthermore, each chapter is read out by an announcer with a medieval style voice, with a short cinematic before your initial playthrough. The sound effects, whilst nothing special during battles, are also a welcome addition and I never found myself becoming annoyed or tired of hearing them (which I have been guilty off with other titles).

As you progress through the game your characters will level up, with each new level offering an increase to either maximum health, attack damage, or magic. As mentioned before, the shopkeeper’s wagon is where you will be able to purchase items to aid during battles, new weapons and equipment that provide a range of various buffs and boosts, and will also allow you to craft new cards for your characters by using gold and minerals collected after defeating enemies.

The amount of cards to craft and choose from is quite extensive, with each new card requiring a closer look to see how it will fit in with your already created decks. You should also weigh up which support cards you will sprinkle throughout the allocated slots, as simply going with an attack only deck will lead to nothing but failure. Mixing and testing out different decks is key to progressing in the game, and will require you to understand how each card can compliment your team or even compliment a previously played card, as some will allow for extra damage if played directly after a specific character’s card.

All in all, SteamWorld Quest is truly an enthralling experience and I would urge anyone who is a fan of either turn-based strategy games or card based games to give this title a look. The combination of beautiful graphics, addicting gameplay, and a uniquely realised world of characters is more than enough to keep you wanting more and more during your playthrough.

SteamWorld Quest releases on the 25th of April for Nintendo Switch, with releases for other consoles planned down the line.