Days Gone Review – The world is trying to kill you

Days Gone has the weight of the world on its shoulders as a PlayStation first-party release. With God of War and Spider-Man just to name a couple and a strong E3 reveal a couple of years ago, it’s finally with us, but expectations from such high-quality games last year work very much against it. It certainly doesn’t captivate in the same way as those previously mentioned titles, but the more time I spent in the zombie infested universe of Days Gone, the more I grew to enjoy it. I just had to switch off the voice in my head that was hoping for more and instead, appreciate what was in front of me.

Days Gone is an open-world zombie game, except the zombies are called “Freakers”; humans and animals that fell to a virus. As the story goes, the world is over except for a few encampments trying their best to survive in the post-apocalyptic madness, along with various gangs who try to capitalise on the good of others.

You play as Deacon St. John (yep that’s his name), who I’m sure is meant to be likable but often comes off as just another gruff white dude with standard “good guy” morals. Even though a shadier past is referenced occasionally, Deacon stands his ground and tries his best to do the right thing, with morals that are sometimes pushed in your face needlessly like “he doesn’t shoot women that he doesn’t have a reason to”, which, I mean, solid life rule.

He shares some pretty cringe-worthy dialogue with his wife, Sarah, in the many flashbacks that are designed to make you care more about them and their plight as he hopes that she’s still alive, but these cut-scenes only usually slow the pace down, especially when you have to travel back to the same place again and again just to trigger them. Story beats are also all boiled down to a percentage of completion, with unlockable skins as you progress. It feels like a weird way to gamify certain aspects of the story; I just kind of wish they’d let some narrative take place without showing progress bars filling up.

The main gameplay loop of Days Gone revolves around hopping on your motorcycle, riding around the map and completing missions for the encampments you come across in order to build trust with them. This ranges from specific missions they give you (such as rescuing a survivor or defending against a gang), to more familiar open world activities like destroying a Freaker nest to make the area safer or completing bounties. Think of a more story heavy version of Xbox exclusive State of Decay. 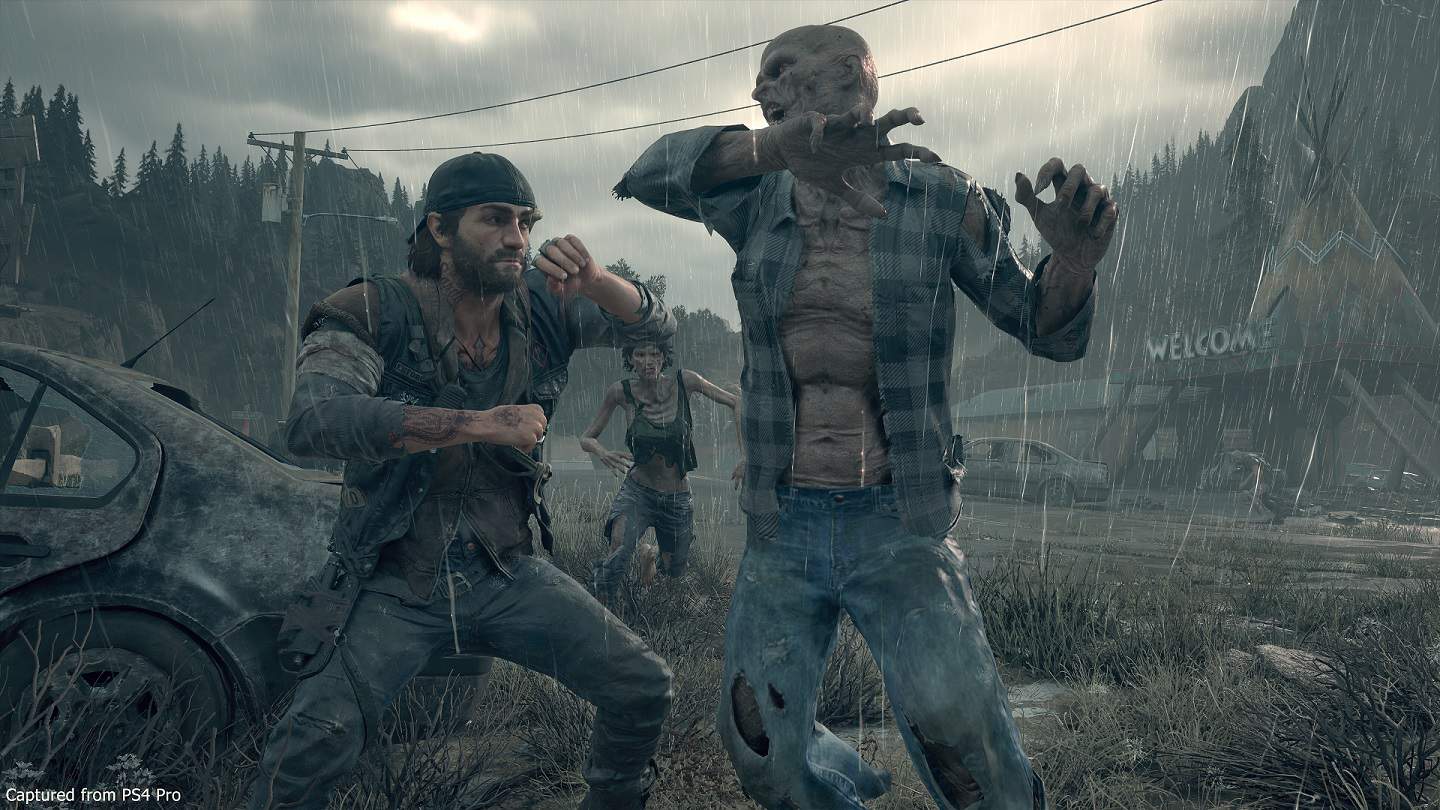 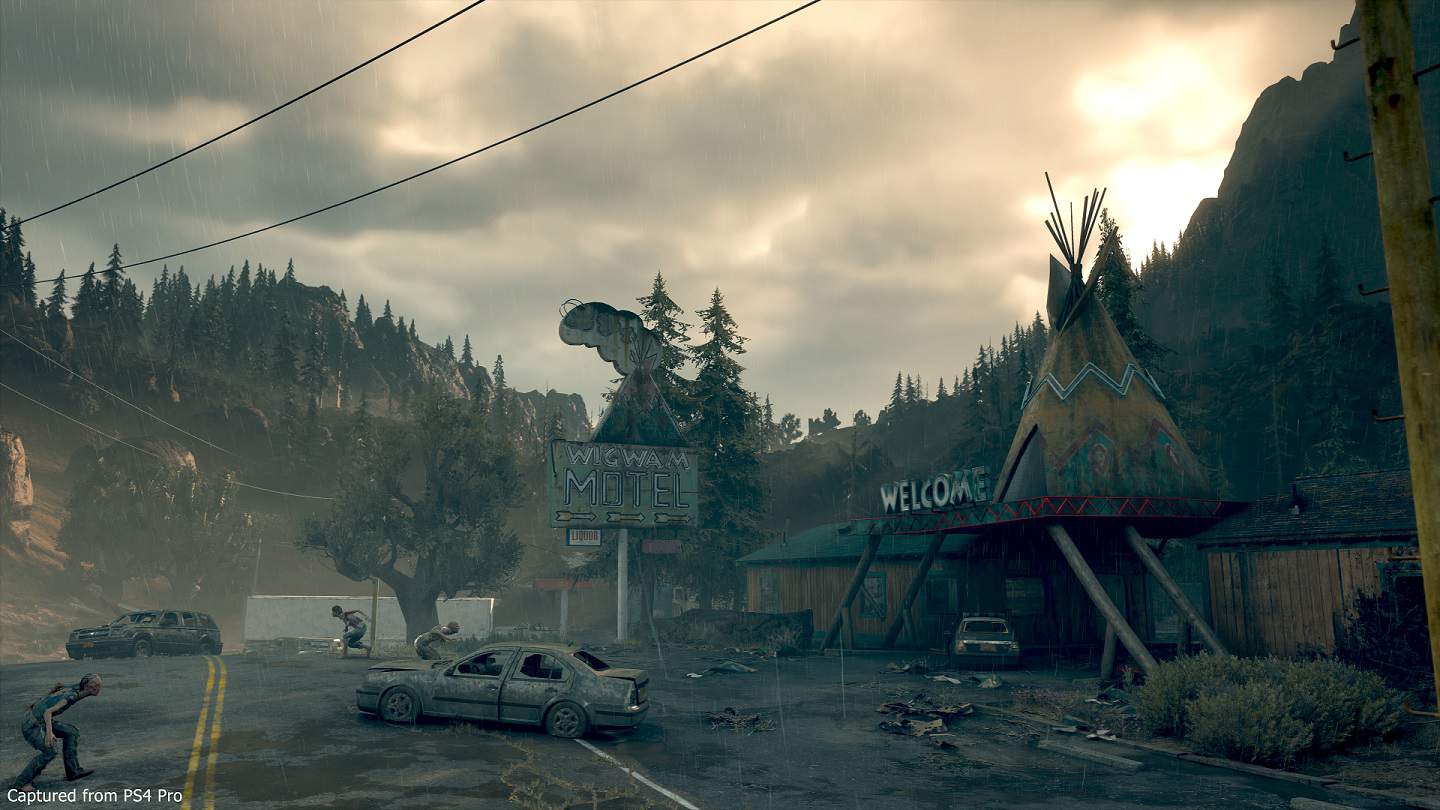 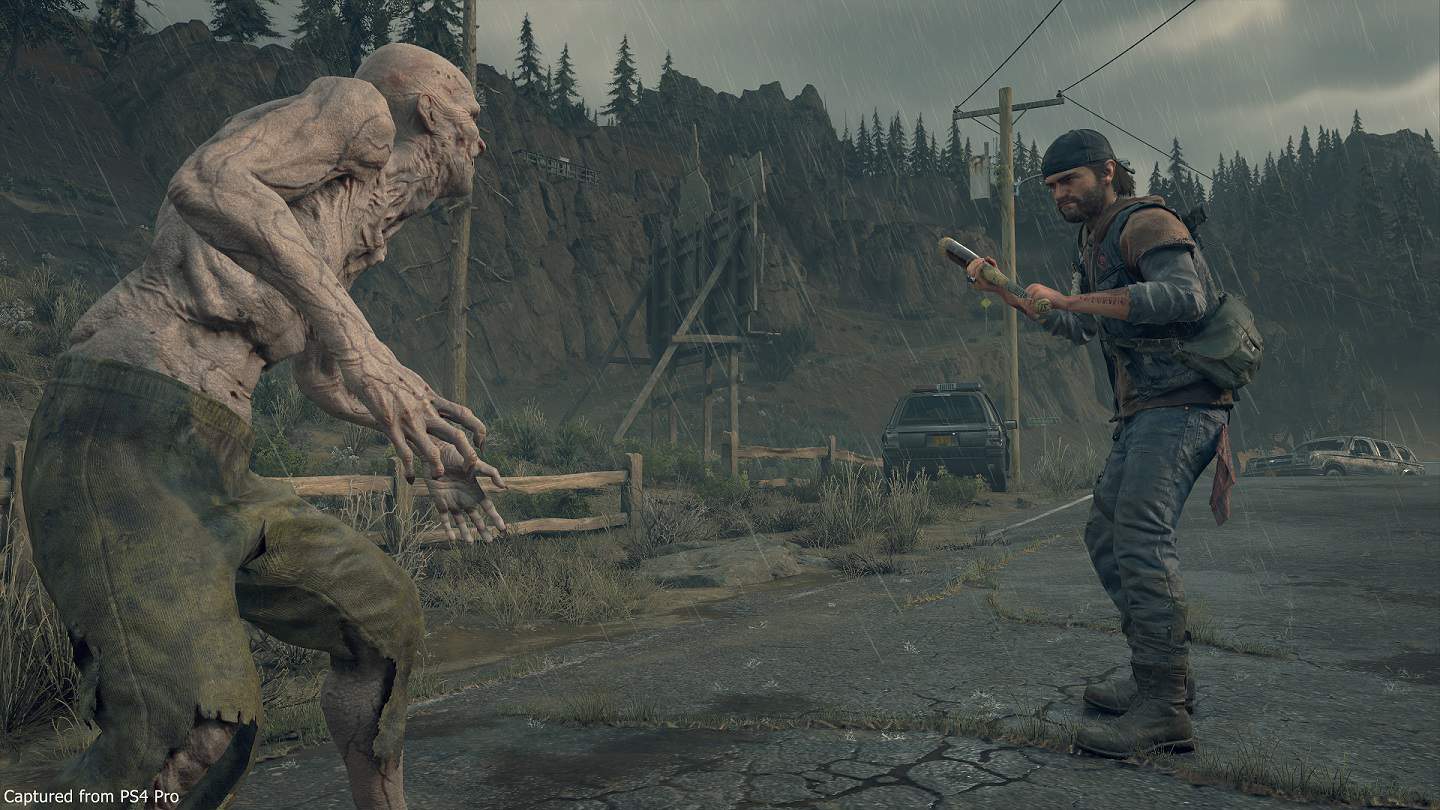 Beyond that, you’ll be clearing checkpoints, which always revolves around finding fuel to power the generator to switch them on, usually while Freakers roam nearby. This provides you with a safe room and the ability to upgrade your health, stamina or focus, but unlocking them the same way each time quickly becomes tedious. Another main story beat involves another organisation, but stealth missions that require you to simply eavesdrop on conversations feel pretty underwhelming in a world filled with such horror.

I felt like there were parts of the map underutilised, even though it looks nice enough at a glance. Man-made structures all look very similar and the forest environments a large and vast, but the main bases you’ll frequently revisit to upgrade your gear and get new missions have enough individual character that they stand out with a lot more detail. I didn’t find many collectibles or secret cool things to keep an eye out for, which doesn’t make exploration feel particularly worthwhile.

“It really does feel like the world is out to get you, making even the simplest of fetch quests into a stressful situation…”

Where Days Gone really finds its feet is with the Freakers themselves. There’s a range of them – your bog-standard ones are the most common, easily dispatchable by themselves but incredibly tricky if there’s any more than say four or five. Newts are the child-Freakers that only attack you if you have low health or go near their territory (don’t worry, their zombies, not children, completely acceptable I’m sure).

Then there’s your larger ones that are tougher to kill, plus the animals that are also infected, including wolves, bears and more. Some asshole humans are thrown in too for good measure; some are actual threats, while others are simply small groups of people trying to knock you down and steal your stuff. At one point I left my bike in the road to search a nearby farm for supplies, and by the time I came back there was some guy literally trying to steal it for himself. It really does feel like the world is out to get you, making even the simplest of fetch quests into a stressful situation of managing resources, watching your health and activating your fight or flight response at every turn. 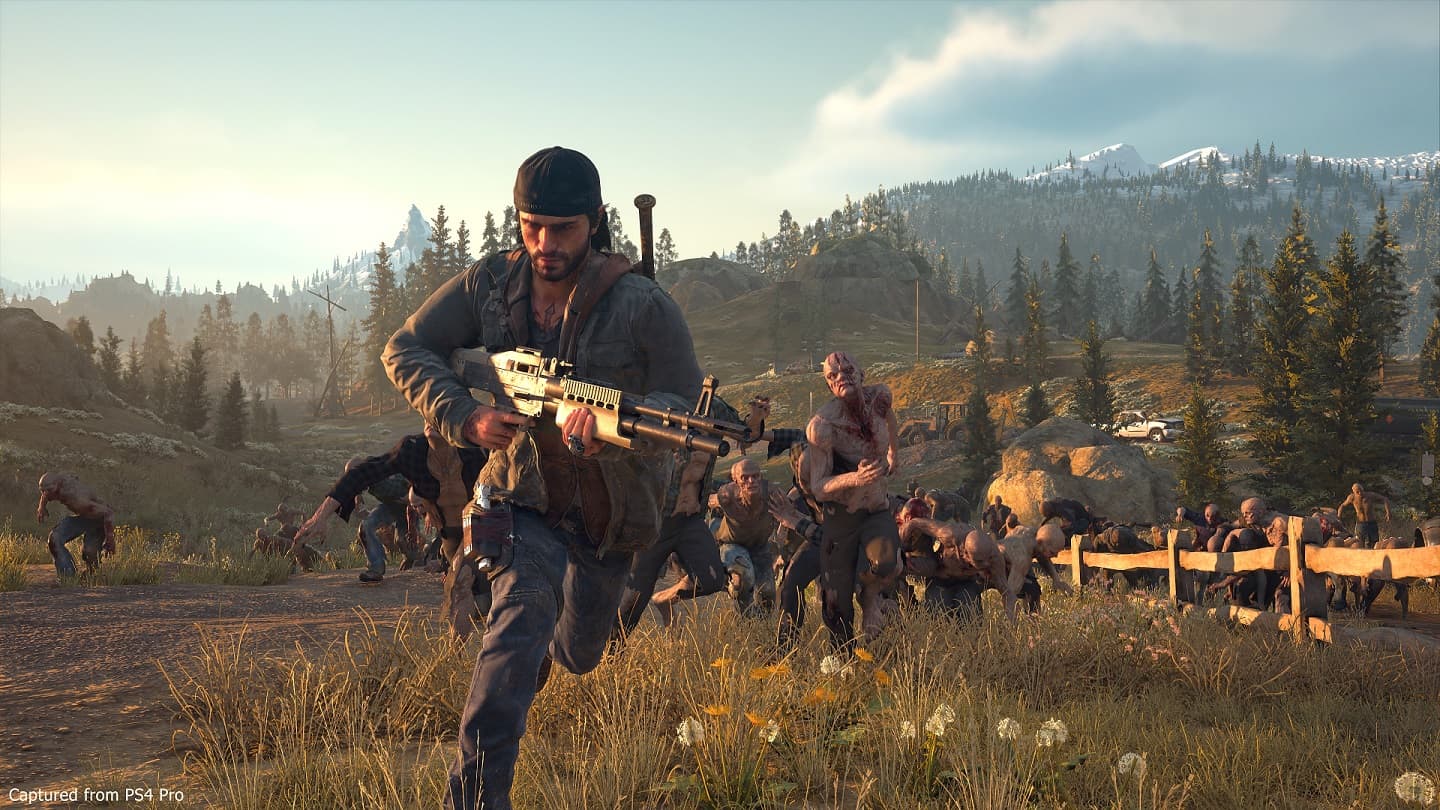 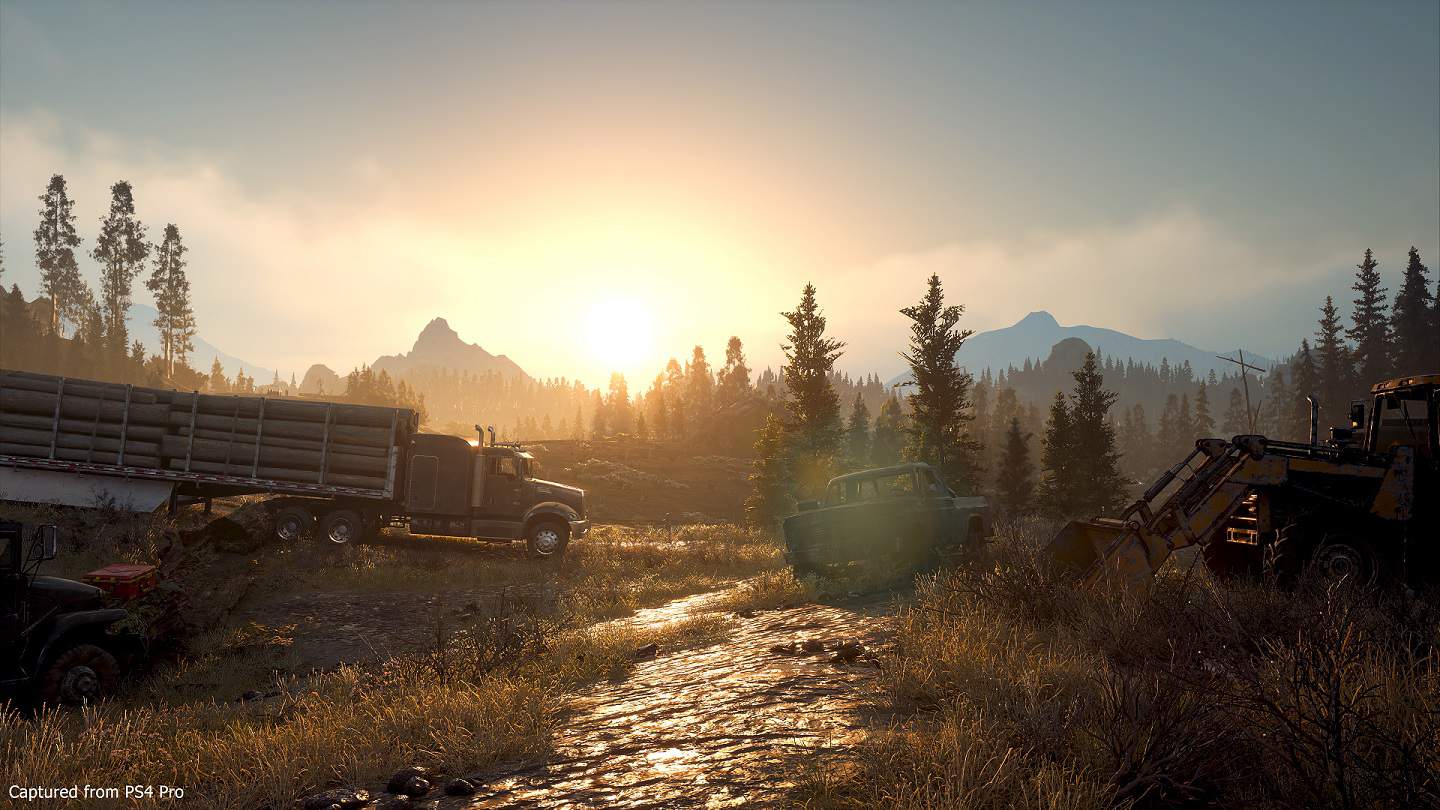 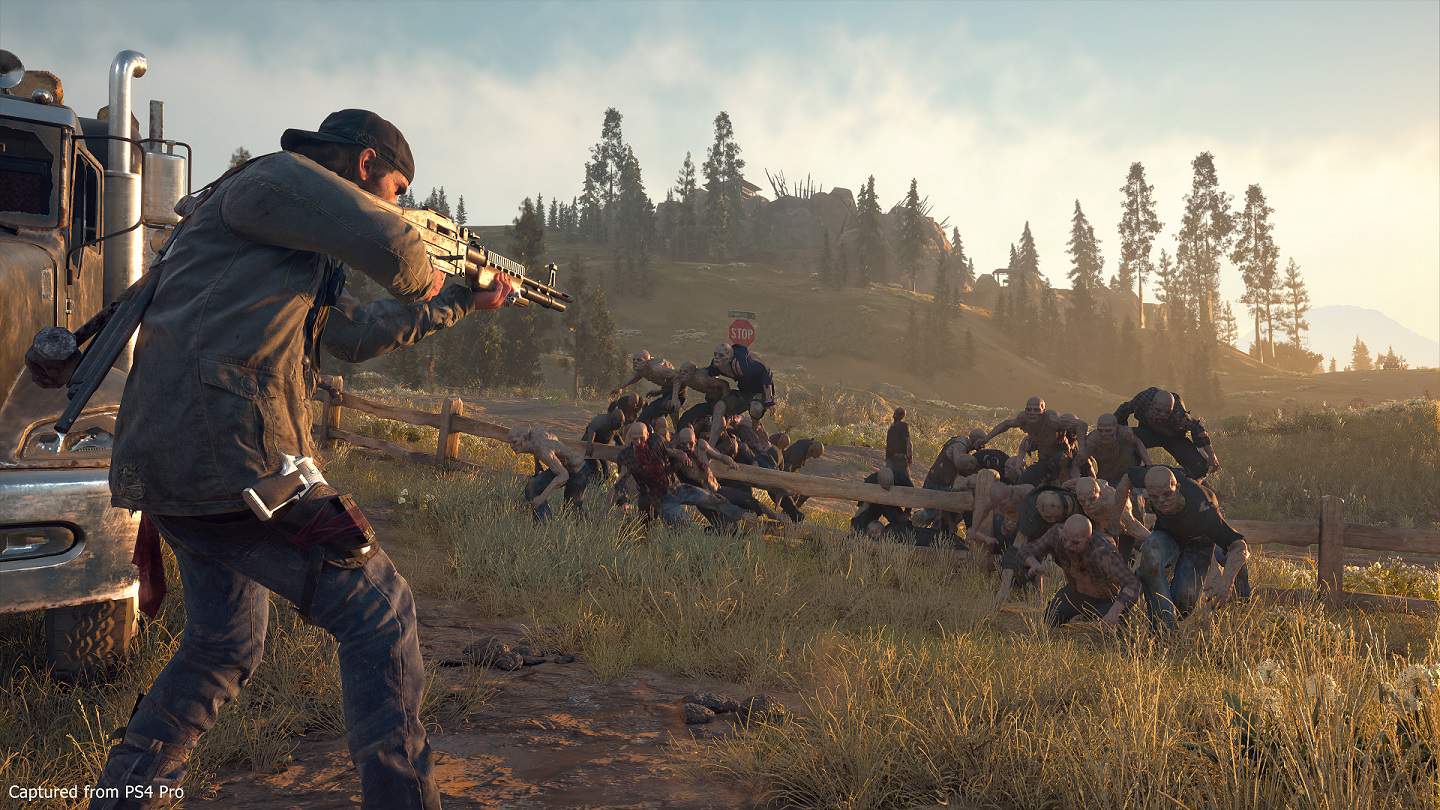 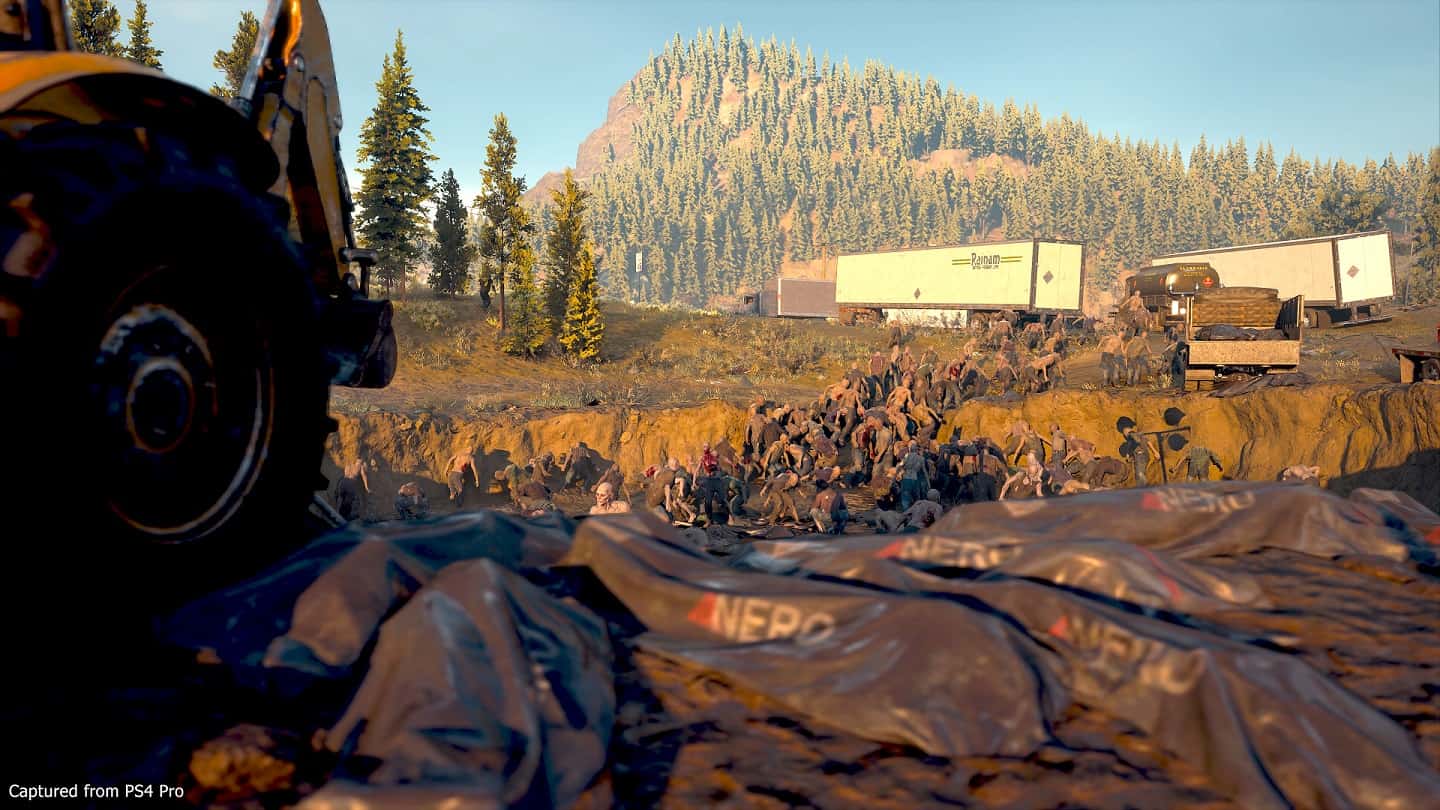 If you do choose to fight, combat feels punchy and satisfying throughout, although I much preferred using a melee weapon like a 2×4 instead of pulling a gun out when it came to the close-quarters combat. Stealth is a little bit easy with enemies’ line of sight pretty poor so that you can easily take them out one-by-one without being spotted, but as someone who normally hates stealth at the best of times, I was actually glad that it was a bit forgiving.

Now, let’s talk about the hordes, which really are something special. My first one came out of nowhere, as one zombie fell out of a train carriage, then another, then another… then before I knew it, there were about thirty all pouring out as if they were hungry liquid, poor Deacon the only one on the menu. When they appear, they create some genuinely thrilling and intense moments, more than I’ve faced in any zombie game before.

They’re difficult to deal with on a gameplay level, to the point where I often chose to avoid them if I could, unless it was absolutely necessary for my progress. It’s a technical achievement in and of itself the fact that they band together and run at you so fluidly, and god forbid you have no gas left in your motorcycle to escape them properly, as you’ll be in for a rough time.

The biggest criticism I have with Days Gone is really that it mostly feels unoriginal. Characters are mostly forgettable and generic, and the open world structure is predictable and a little repetitive. Even so, it was still fun in small bursts to jump in, clear some nests, complete a mission and put it down. It was when I tried to play for long uninterrupted periods that I found myself looking for something else to do. While it’s not as polished as some other large Sony games in recent memory, it still makes for an enjoyable horror game, especially if you’re a fan of zombies and all the tropes associated with zombie thrillers.

Some bugs also impacted my experience, including a loss of audio, conversations cut-off mid-sentence, pop-in, framerate stutters and some frustrating moments, like where I needed to blow up a tank to kill a horde of Freakers, but after failing and reloading to an earlier save, the tank was still blown up from my previous attempt and therefore unusable, making things even more difficult to contend with. I will say the game has had several patches already since release, so hopefully these bugs will be far less frequent moving forward.

Really, Bend Studio have done a commendable job of creating an enjoyable open-world zombie-filled experience, if you can get past some of the repetitive missions and empty-feeling environment. The way a horde of Freakers forms in front of your eyes and chases you down in a hungry, scary pack is a sight to be seen and ramps up the tension, balancing out some of the more mundane quests you’ll come across. I feel like Days Gone would have benefited from having a smaller map to contend with, as it wouldn’t have needed as much padding. Despite my criticisms, fans of the zombie thriller genre will still find a lot to like here – just don’t expect it to change your life.