Mortal Kombat 11 Review – A celebration of guts and giblets

Starting its life back in 1992, a mere month before I was born, was the now infamous Mortal Kombat series. This is a franchise that has helped define fighting games as we now know them and it still stands strong as a pillar of the genre. 27 years later and we now get the release of Mortal Kombat 11. So how does it live up to such a legendary history?

If Mortal Kombat is known for anything its the game’s unwavering adherence to over-the-top violence and visceral depictions of gore. As graphical fidelity improved throughout the years, Mortal Kombat managed to stay at the forefront of gruesome and brutal visual displays and that certainly hasn’t changed here in Mortal Kombat 11. The game completely understands its legacy and identity, finding new ways to shock and disgust its playerbase – in a good way.

Whilst the game’s visuals look superb it’s actually the crunching of bones and impactful thuds that impressed me the most. In fact, Mortal Kombat 11 is audibly and visually impressive in every way. Animations are slick, menus are crisply designed and there are fantastic stylistic choices to every aspect of the game, including a silhouette fight displayed on screen before you enter in to your match.

Mortal Kombat 11 has a level of polish that goes beyond commendable and that remains true for the character designs themselves. Hell, I’ll go so far as to say that Mortal Kombat 11 has some of the best character designs of any fighting game ever. I’ve grown up with the Mortal Kombat series, so I already knew and loved most of these characters before it was ever revealed that they were returning for the newest game. What I didn’t realise was just how much further these characters could be pushed to create believable and distinguished fighters.

From the perspective of somebody who is certainly not a professional fighting game player, Mortal Kombat 11 feels pretty good in the gameplay department. In fact, it feels fairly comparable to Mortal Kombat X. The game is less focused on huge strings of attacks and juggling your opponents and more on smaller bursts of interchangeable combos. It’s fun, it’s fast and it’s certainly brutal. Some slight changes have been made to combat including Fatal Blows that can now only be activated once your health has been depleted down to a certain threshold. A Fatal Blow can only be successfully performed once per match and it feels like a clutch tool to be utilised when your back is against the wall, moments from death. Having Fatal Blows only available when close to death is an interesting choice and one that seems to be paying off. It allows for more tense moments of action when the stakes are truly high whilst still remaining balanced. 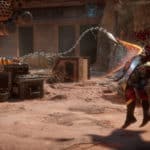 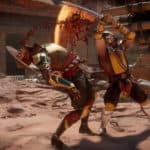 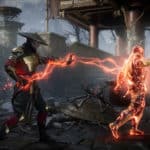 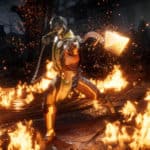 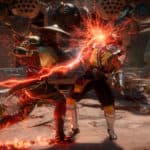 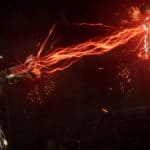 For those, like myself, who don’t fancy themselves experts at fighting games, an in-depth tutorial is available and it’s fantastic. The MK11 tutorial will take you through every basic and advanced technique and you’ll genuinely walk away from the tutorial a much more knowledgeable fighter. It runs you through very specific skills and even teaches you some of the fighting game lingo that will help you understand how to better your fight. It’s intuitive and well paced and has helped me reach a level of competency I don’t think I’ve ever achieved in this genre of games. Once you’ve mastered the general tutorials there’s also character specific tutorials that will push you even further into this deep well of improvement and make you realise just how high this game’s skill ceiling can be.

I have to give the game a lot of credit for catering to both the casual and hardcore crowd when it comes to game design and fighting. The tutorial is amazing for beginner and intermediate players and I also have to give the game props for the tagging system that allows you to tag certain moves whose button combo will remain displayed on the screen.

“A story mode is also available and I have to admit, it’s not half bad… There’s some fun moments intermingled between your standard fights and it functions as a good tool to get to know the characters.”

Local multiplayer is where I’ve found myself spending the majority of my time although online play is of course an option too. From talking with friends and more serious fighting game players, it seems fairly well recognised that the online aspects of MK11 work very smoothly, which is hugely important for a title like this.

On offer for singleplayer focused gamers are traditional ‘Towers’ where you battle a series of enemies as you advance through tougher and tougher opponents. A story mode is also available and I have to admit, it’s not half bad. I’m the kind of guy who will deliberately avoid fighting game story modes, yet this one is actually worth completing. It’s still quite naff and ridiculous, especially considering the multiple timeline narrative, although it’s absolutely not taking itself too seriously which is good. There’s some fun moments intermingled between your standard fights and it functions as a good tool to get to know the characters. I do think this one is more designed for those who already know and enjoy the Mortal Kombat narrative, with not too much to fall in love with for those going in fresh.

It’s important to note though that Mortal Kombat 11 requires an always online connection in order to access many of the game’s features, even for some modes that would appear to be entirely singleplayer. Krypts and Towers of Time are completely blocked off for those without an internet connection, as are online battles, but that one is to be expected. It’s a disappointing decision that could cause serious problems for those with unstable or non-existent connections.

Finally we have to address Towers of Time and the game’s huge array of unlockable content. It’s a sore point for Mortal Kombat 11 players and an issue the wider gaming industry is facing all around. Mortal Kombat has a lot of unlockable content, whether that be skins, gear, fatalities, endings – there’s heaps. It’s all cosmetic but it’s still content that is being sectioned off and hidden behind a big wall of grind. I have to admit I was frustrated after winning my first tower and being presented with 3 different types of virtual currency. It’s just annoying and I understand why people are angry. Mortal Kombat may be a great game but it’s bogged down by unnecessary elements that subdue the fun rather than amplify it. Naturally you can bypass some of this grind by paying real money to purchase the cosmetics you desire.

Since the initial time of writing, Mortal Kombat 11 has received a fairly sizeable patch that is aimed at fixing Towers of Time and the “grind” that comes with unlocking content in the game. Players have been awarded virtual currency in the game as an apology with rewards for completing Towers being increased and the difficulty to complete them being decreased. It’s a great step towards addressing the issue and we’re glad to see it implemented so quickly. Nevertheless players should still be tentative of these features and I wouldn’t jump in to the game assuming everything is completely fixed and perfected.

Overall Mortal Kombat 11 is an incredibly enjoyable fighting game. It’s issues don’t overshadow its successes and it still remains a very positive experience upon reflection. Mortal Kombat 11 will be a game I return to time and time again. If for no other reason than to cathartically let off steam whilst I turn my opponents into fountains of blood, guts and giblets. It may not be a flawless victory, but Mortal Kombat 11 puts up one hell of fight.