My Time at Portia Review – Living the good life

My Time at Portia comes in after a surge in popularity in the “life simulation” genre of gaming, popularised specifically by the runaway success of Stardew Valley after foundations were laid in Harvest Moon decades ago. After being in Early Access on PC for a year and gaining all the potential polish that comes with that extra development time,  the game is available on consoles now as well so that you too can make your father proud by being the best craftsman you can be. This review includes my thoughts on the Nintendo Switch release.

So the story goes, you inherit a workshop from your Pa and set out to build it up, doing quests for others, starting a new life as a builder with only a trusty handbook by your side to help you learn the ropes. What follows is a life sim that tasks you with collecting materials, mining for ore, fighting through dungeons for rare materials and of course crafting machines to expand your workshop, complete missions and form relationships with townsfolk.

It’s a tried-and-true formula, but initially My Time at Portia doesn’t make a large effort to explain exactly what you’re supposed to do to progress. The handbook roughly outlines what you need to make in order to craft certain materials, and you’re expected to figure out how this works on your own. To craft some early items means first making the machines you need, which needs materials that must be harvested to then create another machine… it’s a repetitive loop that is also held up by in-game timers that means things take time to be made, often requiring you to sleep and trigger the next day-cycle.

Once you’ve created your foundations,  things to start falling into place. It takes a few hours before you’ll be properly “set up”, but by that stage you should understand the mechanics of the game and fall into a comfortable rhythm of collecting and crafting. Exploring mines for materials is simple and pretty enjoyable, as is the simplistic combat of searching through dungeons. The whole thing is very cathartic, as a life sim should be.

“The whole thing is very cathartic, as a life sim should be.”

Completing quests improves the ranking of your workshop and the entire vibe is cutest and endearing with friendly characters to talk to and colourful creatures bouncing around the map while you complete task after task. After a steep learning curve, My Time at Portia leans into a happy open world setting where you can…. well, live your best life. There are some performance issues on the Switch version that do hold it back from being a must-have in my mind, such as long loading screens and a stuttering frame-rate at times. I also wish there was more voice-acting from characters – I’m just not a big fan of reading lots of text and it’s a little small in portable mode. 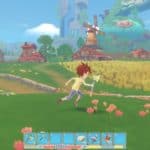 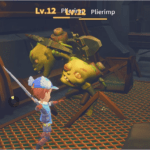 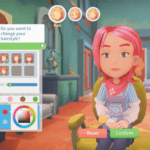 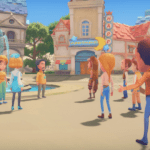 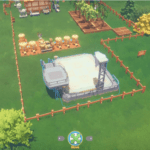 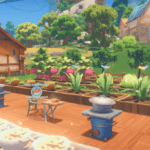 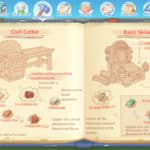 Even with those slight niggling flaws, I still found myself going back to the game day after day. It’s easy to get sucked in as the days and nights go by on the in-game clock, and there were often times when I gave myself a 30 minute window to play before quickly clocking up hours chopping trees, searching through mines and having chats with chirpy NPC’s. The sign of a good life sim is one that manages to absorb time from your real life, and My Time at Portia does this successfully.

My Time at Portia

At first I didn’t engage with My Time at Portia as quickly as I thought I would, due to a lack of hand-holding and slightly daunting open world to get lost in. The more I played however, the more I enjoyed the many many elements that come together to keep the game engaging and something I wanted to go back to time and time again. The portable nature of the Switch makes it an easy recommendation, as it’s quite easy to kill some time on a few in-game tasks. Be careful though, as you may find yourself sucked in for hours at a time before you know it.