When Super Mario Kart launched all the way back in 1992, mascot-based kart racing with weapons became the next big thing. Mario Kart 64 kicked it into the stratosphere and this genre was a sure fire moneymaker back in the day. For a while, every man, his dog and their mascot had a kart racing title. Yet for reasons known only to Sega, Sonic the Hedgehog had to wait 18 years to get his own kart racer via 2010’s Sonic & Sega All Stars Racing. Compared to its peers All Stars Racing was faster, looked better and was jam packed with Sega IP. Likewise its sequel, 2012’s Sonic and Sega All Stars Racing Transformed turned the action up to 11, featuring planes, boats and courses that changed lap to lap.

Team Sonic Racing is developed by Sumo Digital who were responsible for the All Stars titles. It uses an enhanced version of the same engine meaning the game looks, feels and plays like All Stars did, which is not a bad thing. This time around though, the Sega fan service is put on the back-burner and the focus is squarely on Sonic and friends. As the name implies, Team Sonic Racing also introduces a heavy emphasis on team gameplay as the characters are split into teams of three to battle it out over 21 tracks, 12 of which are new and 9 tracks that return from the All Stars titles. Messing with a tried and true formula is a risk.

Team Sonic Racing features 15 characters racing in teams of three, with three driver classes being speed, technique and power each with their own unique attributes and abilities. For example, a technique racer can drive off road without losing speed whilst a power driver can drive through obstacles. Each team has a character from each class to balance out the mayhem and this is where the Team Racing mechanic comes into play.

The first thing to note is that this game is no walk in the park; the AI are in it to win it. There is no easy setting and even experienced racers aren’t going to be driving away with first place very easily on normal difficulty. Don’t let the cuteness fool you; Team Amy with Chao and Big the Cat in tow I found to be especially formidable opponents. Aside from the fact that there are two less opponents that want to wreck you, the Team Racing aspect features a range of techniques you will need to be across in order to be effective.

Draft behind your teammates to pick up speed and slingshot past them,then return the favour. If your teammate is spun out you can drift past them to bring them back up to speed. You can share item boxes both by offering them to your teammates or requesting one if you are in a fix. Teamwork will fill your team ultimate meter allowing you to trigger a team special. For Mario Kart fans, it’s best described as a team star power up; invincibility, super speed and the ability to knock opponents out of the way for a short period of time.

Team Sonic Racing features a story mode where you make your way across 7 world maps competing in races and completing challenges along the way such as ring grab races, elimination races and checkpoint missions. Completing these challenges wins stars that allow you to progress through the map and collect keys to unlock special paint schemes and such. The story is told via character interaction prior to racing, noting that this is optional and selecting a race with X will skip the story. Given that X is universally used as select, I accidentally skipped the story multiple times. That said though, the story is mainly just context and banter, it really only matters with some of the challenges as it will explain the mechanics.

Outside of the story the standard options are present, such as grand prix, single race and multiplayer, and these can be played as either team racing or classic with everyone out for themselves. An interesting quirk is that given Grand Prix are made up of four races and of course 21 isn’t divisible by four, this means the last grand prix features two tracks already raced, but that’s a minor flaw. There is no Mario Kart-esque battle mode present but I don’t miss it and of course this isn’t Mario Kart. 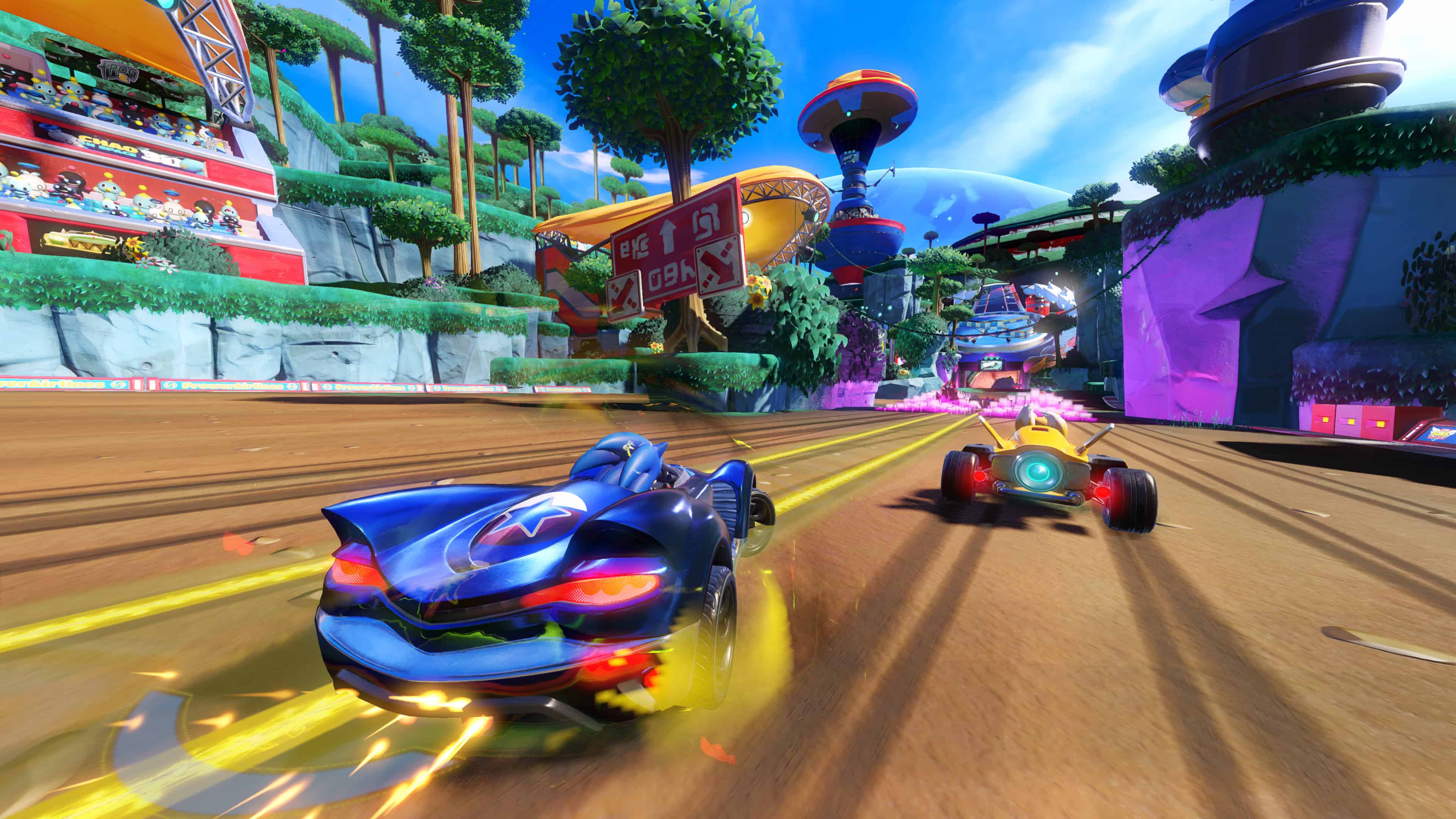 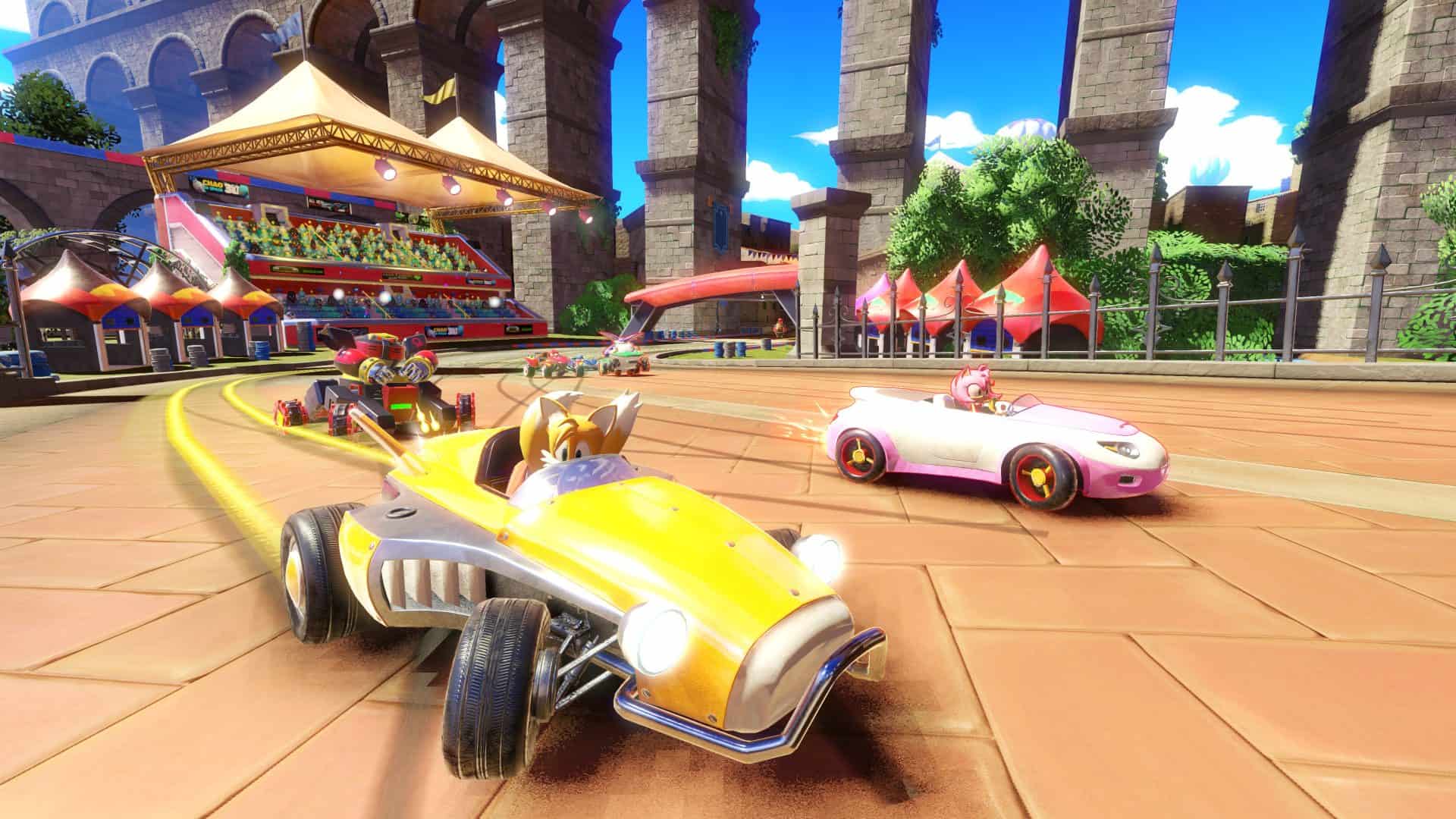 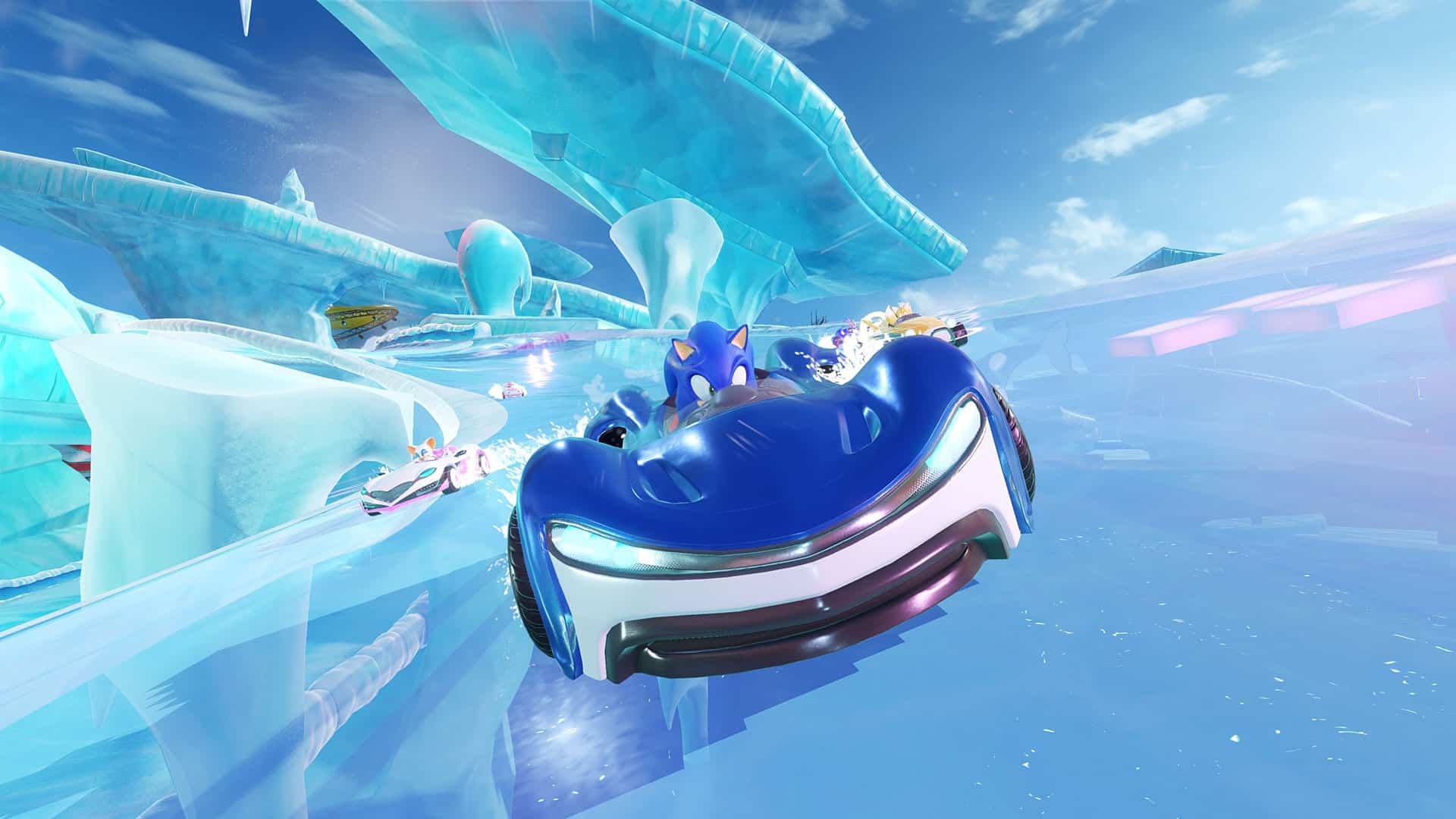 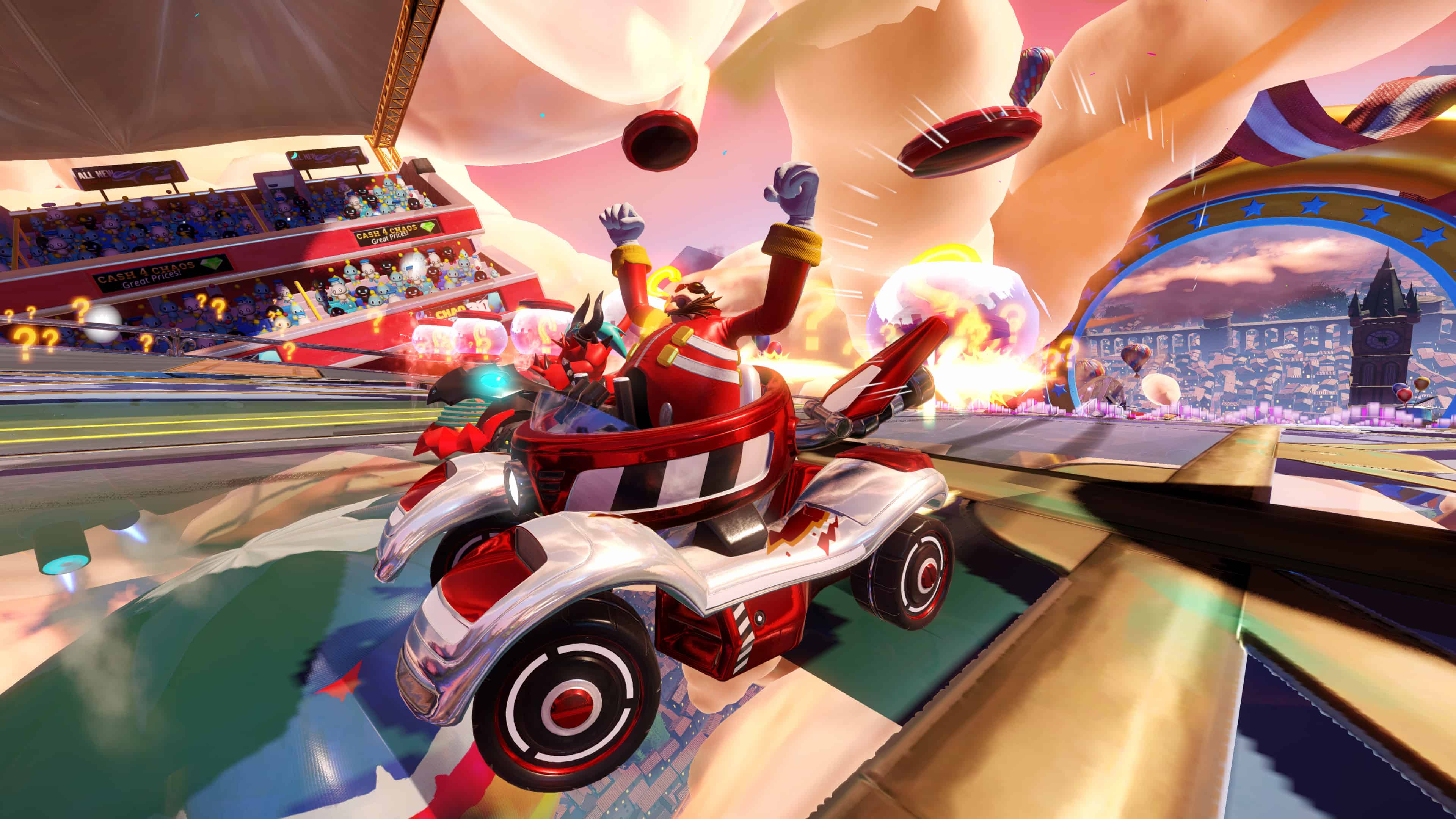 Speaking of crews, the character list is a who’s who of the Sonic universe with a slight bias toward the more recent titles. Aside from your staples Sonic, Tails and Knuckles et al there are a couple surprises such as Big the Cat who is a cult hero from Sonic Adventure, Rouge the Bat from Sonic Adventure 2 and even Vector the Crocodile from the long forgotten Knuckles Chaotix. Interestingly there’s no Mighty or Ray from the recent seminal Sonic Mania, but there is still plenty of choice. The characters and teams will banter with each other throughout the race, Tails is particularly cute with his “Hasta la bye bye” launch call. The racer banter is actually pretty entertaining for the most part and manages to avoid being annoying; the humour adding to the fun of the game.

Team Sonic Racing features 21 varied courses being 12 new and nine return from the All Stars games. The new ones in particular are pretty awesome to be honest, personal favourites include Frozen Junkyard, Ice Mountain, Boos House and Market Street. The courses are a decent length, to the point you will frequently think you are on the last lap when there is actually another to go. They are all very vibrant and colourful with lots going on in the background. An unfortunate side effect of this is that when you play local split-screen multiplayer even though there is no noticeable drop in graphics quality, the smaller screen loses the detail and expansiveness that you get when you have a screen to yourself.

As is customary when it comes to Sega/Sonic games, the soundtrack is fantastic and some of the tunes are genuinely catchy. For the most part it is classic Sega guitar pop with lashings of electronics. Composed by long time Sonic axe man Jun Senoue and his band Crush 40 it also features contributions by Tee Lopes, Hyper Potions and more. The 130 track set is due to be released via 3 CD set and streaming services upon the games release so get that in your positivity cannon.

Overall, some gamers may find the difficulty a bit jarring compared to other games in the genre but with time comes experience. Although Team Sonic Racing isn’t supposed to be a direct sequel to Sonic & Sega All Stars Racing Transformed, it does definitely feel like one and so its hard not to compare the two. Gone are the boats, planes and the wider Sega universe and its hard not to miss those features at times.

Team Sonic Racing is a fun game to play and that is all that matters. It features plenty of characters with their own personalities racing over a range of varied lengthy courses with a great soundtrack. The team racing aspect is fun and the team manouevers mean you need to adjust your game play, it’s more interesting than simply having two less characters trying to destroy you.

Team Sonic Racing is a solid kart racer that rarely puts a foot wrong. It’s fast, colourful, loud and fun. The Team Racing aspect is well done for the most part and adds a refreshing spin on a genre that has been done to death. Some players could find a couple of the story challenges a bit frustrating and newer players could struggle against the brutal AI. The characters personalities come through in their banter and are for the most part endearing. It is the best kart racer on PS4 and Xbox One for sure but of course is up against the mighty Mario Kart on Switch. If you like the genre, it’s definitely worth a try.