Conan Unconquered is a real-time strategy game developed by Petroglyph Studios and published by Funcom. The premise of Conan Unconquered is simple: while barricaded in your fort, you need to protect your territory and survive, as wave after wave of enemies besiege your side of the battlefield. With Petroglyph studio veterans taking cues from games like They are Billions and the Command and Conquer series, they have created a complex, fast-paced, and interesting gameplay experience.

Before you begin your campaign, you’ll choose a hero to head up your army. For the standard edition of Conan Unconquered, you have the choice between two heroes: Conan and Valeria. Each hero has special abilities that will help you gather resources, explore the map between enemy attacks, and keep enemies at bay once they try and break down your walls. Enemy waves come at regular intervals and become stronger as the game progresses; while at the start of the game you can easily send your chosen hero into battle on their own to single-handedly defeat a handful of spear-throwers, you’ll soon need a larger army to fight off hordes of soldiers and monsters in one single battle.

Through the game’s interface, you’re able to track when an attack wave is forming or approaching. This is important, because you will need time to strategise, set up your defences, and gather resources before each attack hits. In order to build up an army and to gather the resources to keep your army going, you will have to leave your fort to explore the far corners of the map and slay monsters (called ‘creepers’). These creepers can come in the form of spiders or other giant animals and, once killed, you can harvest valuable components from their carcasses. You can use these items to bolster your defences or construct buildings that either generate gold or allow you to train more units for your army. This is where having a strong hero is crucial: defeating creepers with the few military units you have leaves your fort unprotected and vulnerable, not to mention their power doesn’t even come close to Conan’s or Valeria’s. I felt that this was a great way Conan Unconquered encourages players to dive into the game early-on and get familiar with the combat mechanics and map structure, while levelling up your chosen hero in the process. 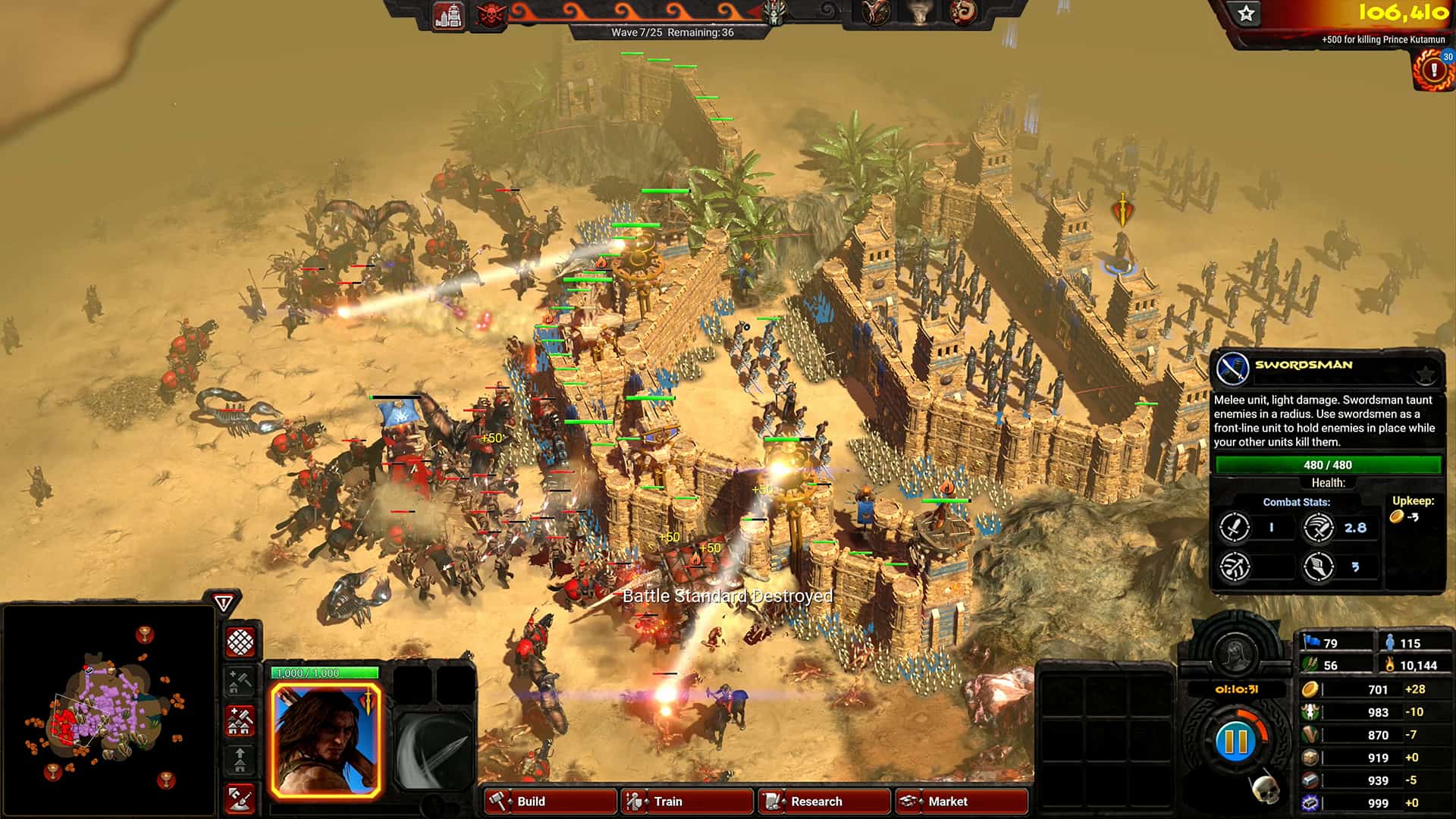 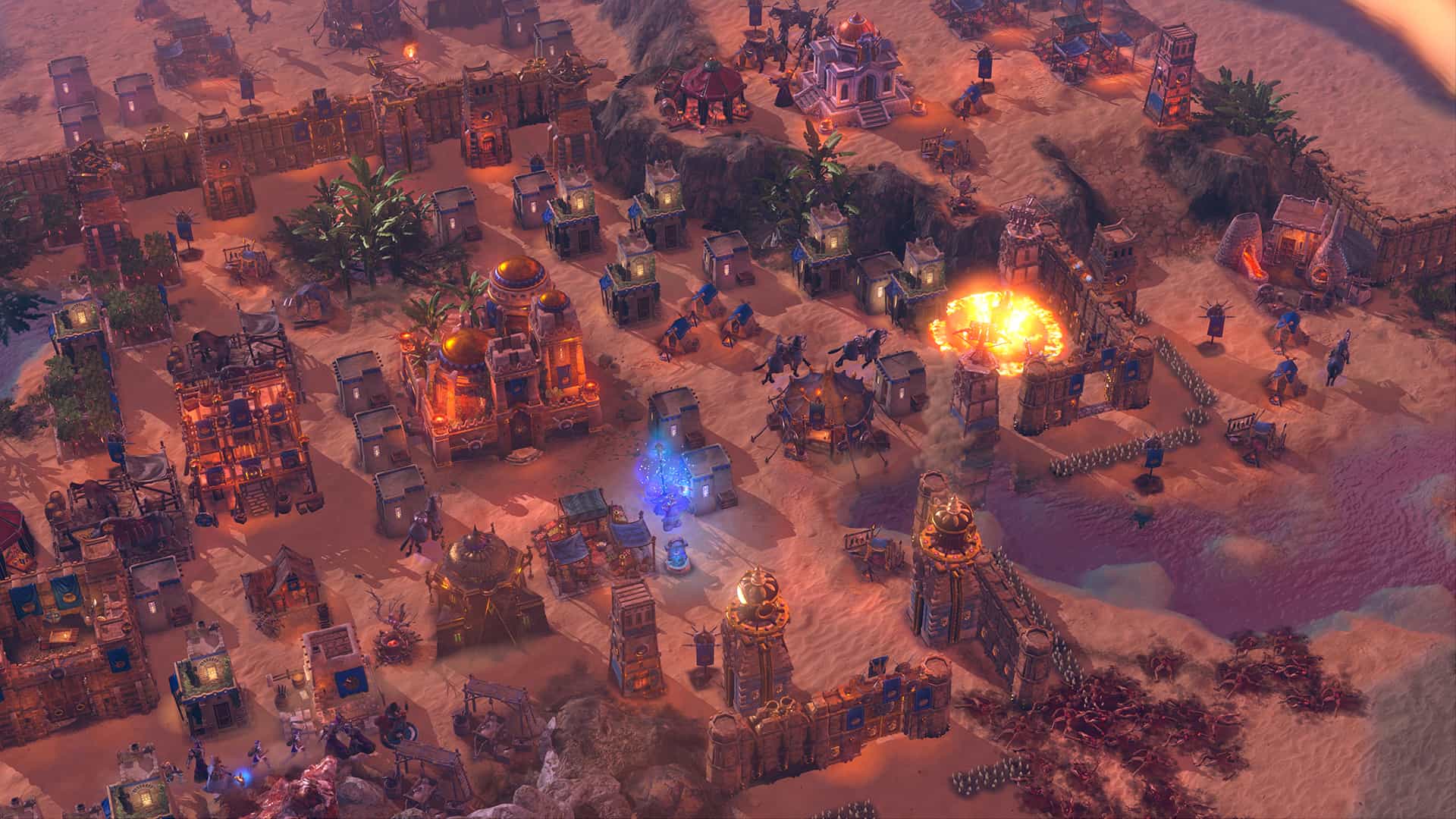 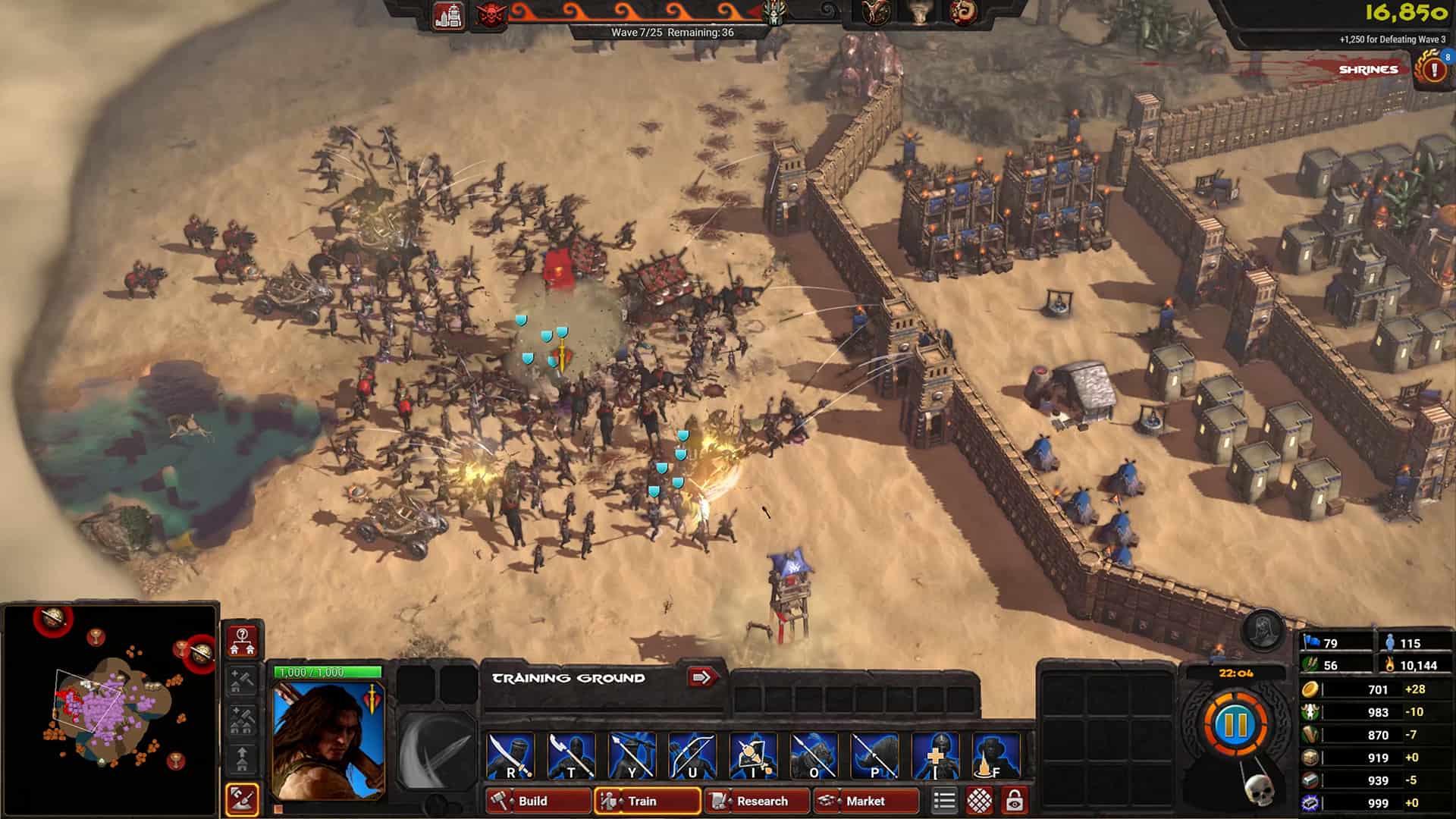 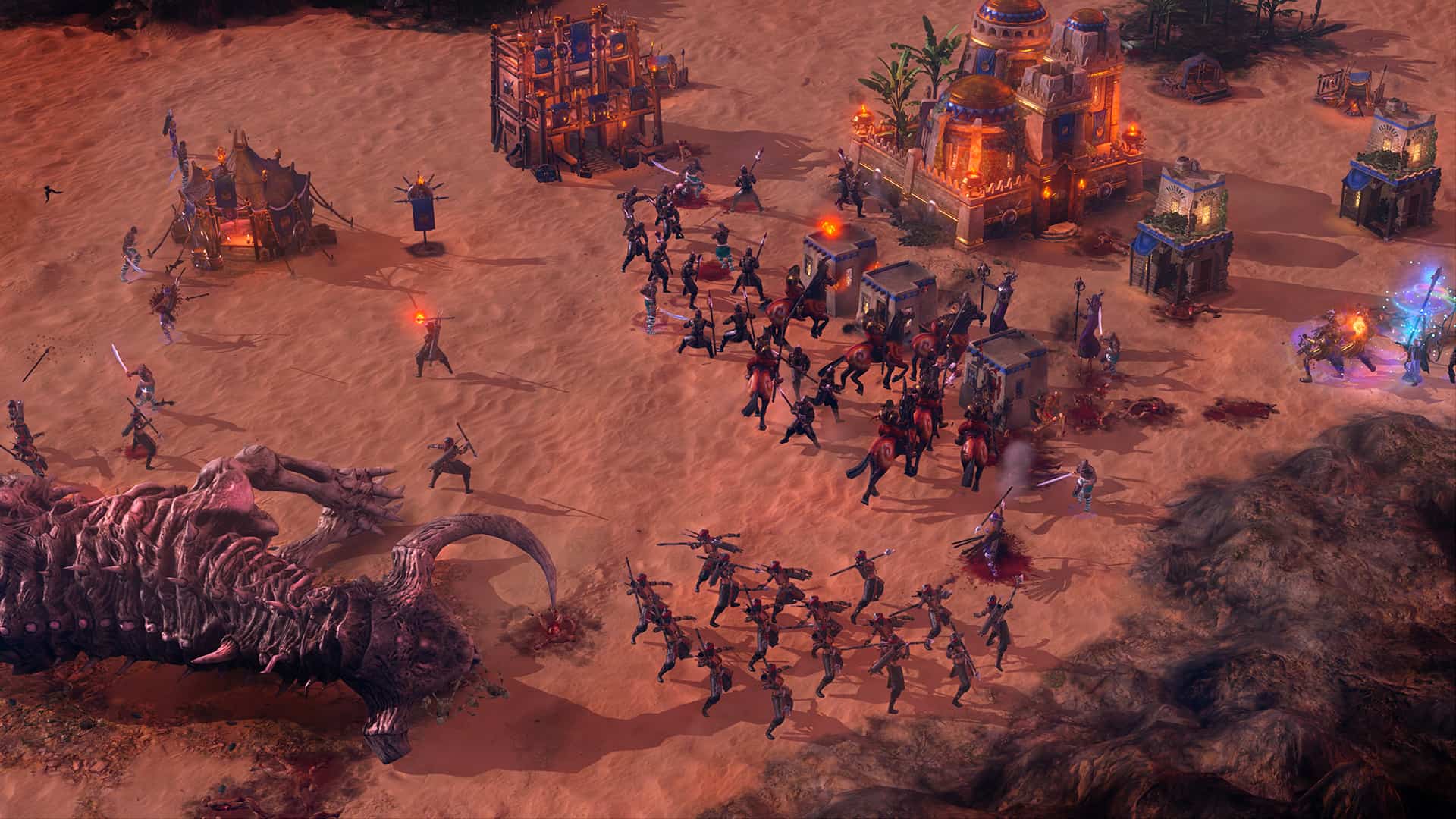 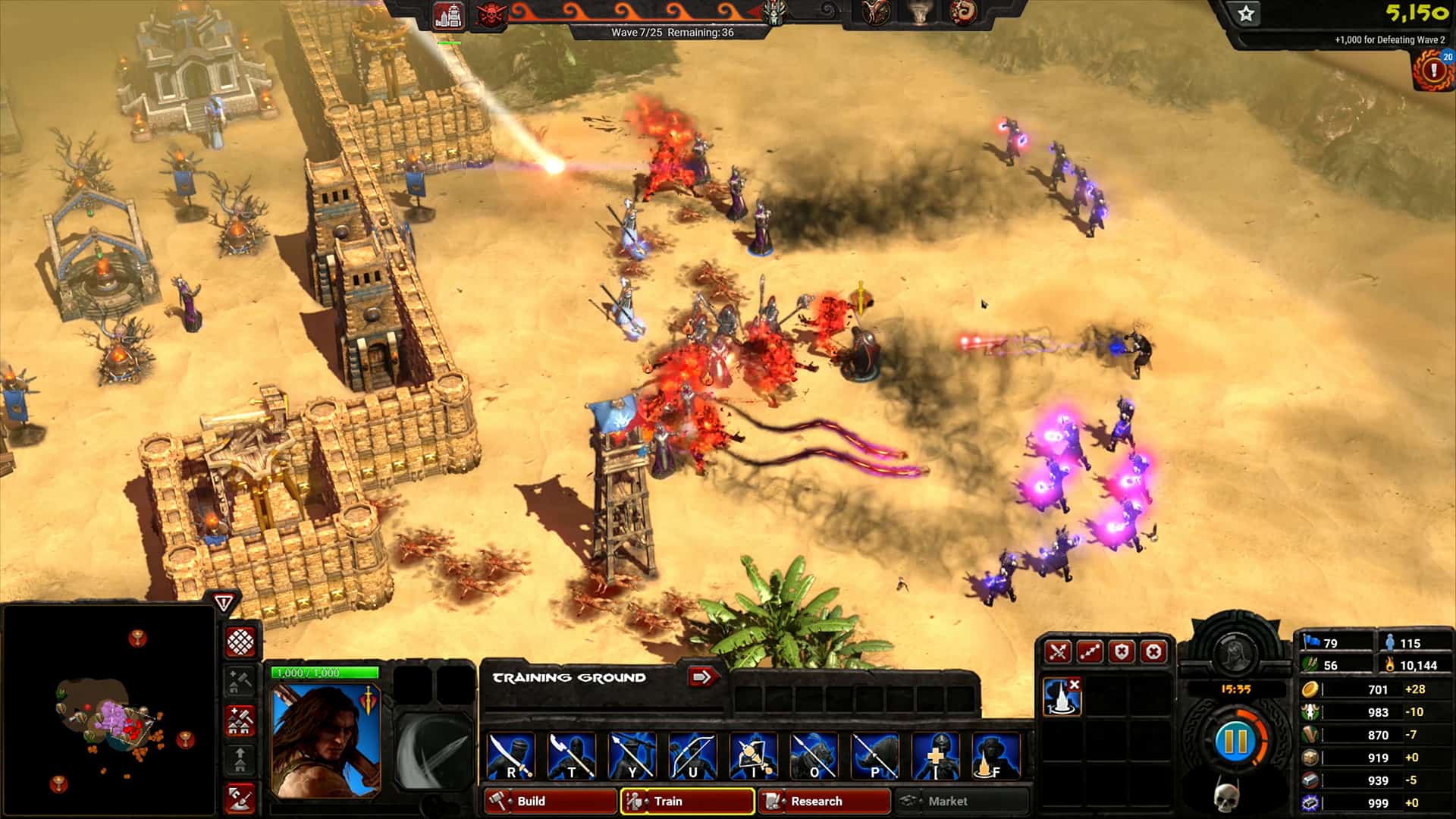 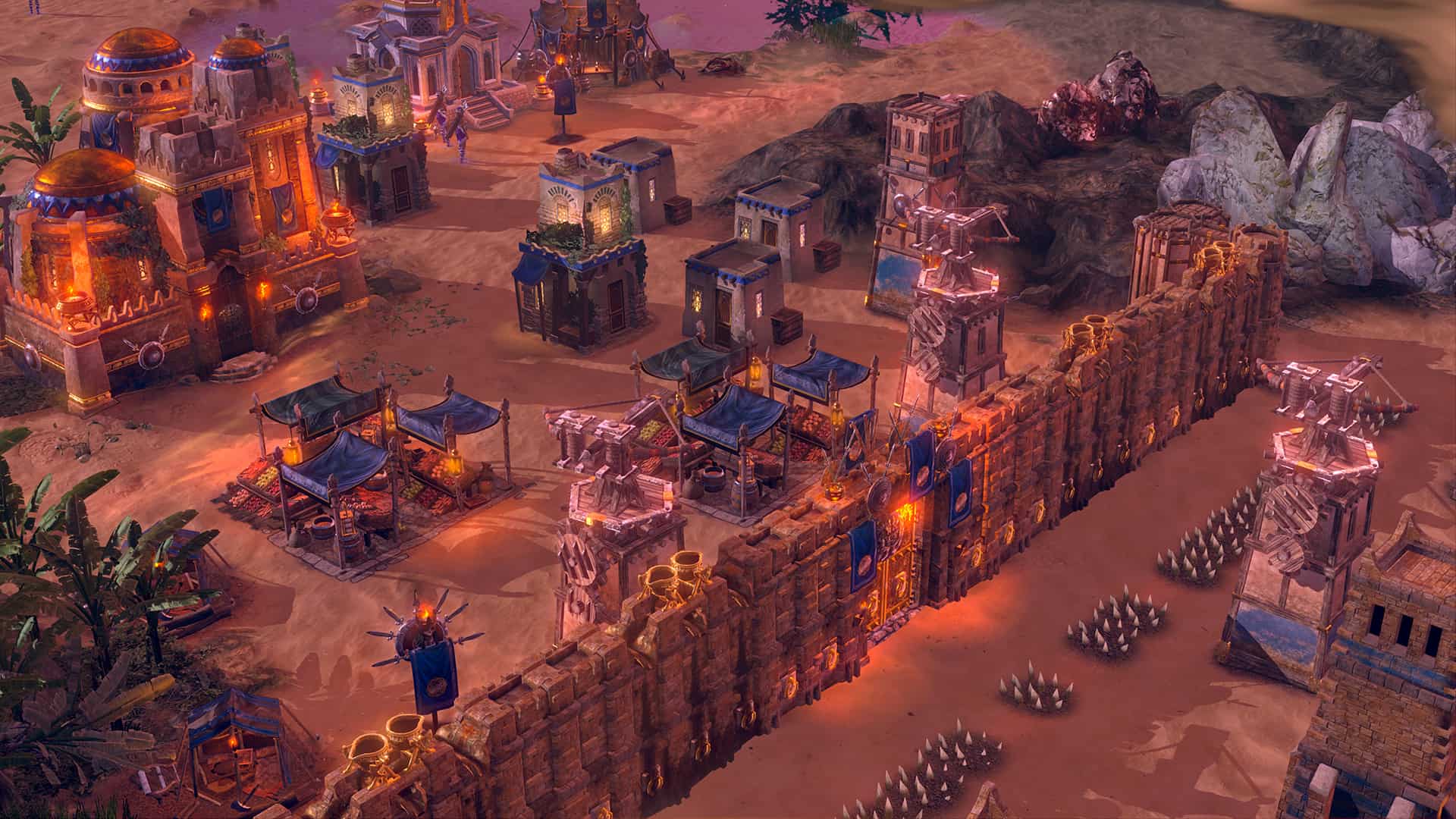 Once you’ve gathered enough resources and explored the map, you’ll need to build up your defences between enemy attack waves. Since the waves of enemies get bigger and more threatening as the game progresses, you’ll find yourself frantically trying to repair and upgrade your defences throughout the game. Luckily, there is a pause button, allowing you to pause the battle during an attack wave and consider tactics, train more army units, or position your troops. Conan Unconquered’s battles are not the kind of battles you can win on the fly; if you want an effective army, you will have to mindful about how you upgrade it and when; every military unit needs a salary, and without enough gold and resources, your defences will collapse very quickly.

“Conan Unconquered is the perfect game to jump into and storm straight onto the battlefield.”

In this way, I found that Conan Unconquered interestingly blended city building and real-time strategy: the structure of the game forces you to engage with building and resource management if you want to survive. Since sheer size of the enemy forces will grow rapidly and their attack strategy becomes more complex too, you have no choice but to adapt your strategy as you go. If you rely on the size of your army alone, they will die quickly and mercilessly after the first few attack waves in a campaign. New enemies will bring new challenges, too. For example, as you increase the size of your army to fight off enemies, your fort will surely but slowly become surrounded by piles of dead bodies. This, in turn, can spread disease behind your walls and make troops less effective.

These mechanics are definitely where Conan Unconquered is strongest: the game throws you curveballs when you least expect it. Having to think and act quickly certainly makes for a fun, suspenseful, and engaging gaming experience, and the way Conan Unconquered mixes different aspects like resource management, military combat, and exploration keeps things interesting. Game maps are also procedurally generated, which adds to the replayability: no two campaigns will be the same.

The only area where I thought the game would have benefited from some extra polish was the interface. While the graphics are charming and reminiscent of games from bygone eras, the interface does feel clunky in places, and keeping track of resources sometimes feels more cumbersome than it ought to. While the tutorial at the start of the game gives you a good overview of the basics, it could be expanded on further and presented in a more straightforward way. However, if you like real-time strategy games and you’re looking for a challenge, don’t let this deter you: Conan Unconquered is the perfect game to jump into and storm straight onto the battlefield.

Conan Unconquered delivers a fast-paced real-time strategy game with nostalgic flair. Campaigns will have you exploring dynamic environments while slaying hordes of enemies with ever-changing abilities. With its procedurally generated maps, Conan Unconquered will give you a new and refreshing experience every time you play. If you are a fan of strategy games and are keen to go into battle alongside Conan, this game will be a wonderful addition to your library.