Dollhouse Review – All show and no shine

When Weeping Angels were introduced into popular sci-fi show Doctor Who back in 2007, the concept spooked audiences across the globe. Twelve years later and indie game Dollhouse explores a similar idea: a stalking threat that nears closer and closer when you’re not looking. This time it’s with mannequins instead of your stone statuesque angels. Did Dollhouse pull it off or is it all just a show for the screen?

Dollhouse follows a detective named Marie. She’s doing her best to escape a nightmare-ish world she herself created in order to hide a dark, dark secret. Naturally this concept means  you will go through about eight different settings, each a key part of Marie’s memories, inevitably helping you uncover the secret. These settings or levels vary from your typical hospital and creepy house to interesting and unique ones like a hotel, cinema and movie set. Both the movie set and cinema were highlights though unfortunately this didn’t come with a cost. While the game lies heavily into noir and excels through callbacks and references to classic icons such as Alfred Hitchock and Audrey Hepburn, this is about as interesting as these levels go.

It’s infuriating more so then when one of the only significant levels, the cinema, is overwrought with large frame-rate dips and getting stuck on objects Marie shouldn’t have. These issues were present in all the levels but only enough so that it was easily to shrug and laugh off. However the cinema level’s charm is taken from it completely from these problems. I soon rolled my eyes past the neat little homages and focused all my attention over the sluggish game performance and wanted the level over and done with. This was the second level. 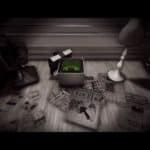 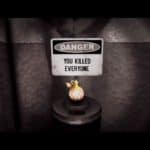 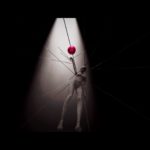 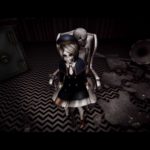 Dollhouse is a difficult game to discuss, as it wants so desperately to do things right and be a staple in the horror genre but it does so much to prevent it from achieving this. The art design is pretty enough, with the coloring heavily gray-scaled barring a few key items. It has its setting, references and homages nailed down well. It also has some attempts to help close and neaten up the package and one of these is a photo mode, which doesn’t give the option for other filters and really is just there to remove the HUD to make for clearer screenshots.

It has other decent attempts such as its dynamic map generation for the levels that really just works as a detriment. I see what they were going for, in theory each time you play will be different, even when the theme sticks, but this doesn’t really work when the generated levels become these labyrinths you can’t make heads or tails of. Luckily there’s functions such as the ability for you to apply chalk to walls so you can ascertain some idea of your surroundings, however don’t expect this to be a saving grace.

Gameplay in Dollhouse is decent enough too. Players see yourself trying to shake off the pursuing smaller mannequin foes while running from your life from the giant and brutal mannequin named ‘It’ that seemingly materialises from nowhere. There’s abilities to help with this too, you can use your almost camera-like eye to ‘flash’ enemies which can slow the larger ones and make the smaller ones disappear altogether.

“It has its setting, references and homages nailed down well”

This large pursuit portion will leave you having to be quick on your feet while you go through the level’s objectives too, meaning the player has little time to rest. These objectives will see Marie collecting memories (in the form of film reels) in order to unlock certain doors and later get perks which can help in the long run. This cat-and-mouse mechanic transfers over to the game’s multiplayer mode too, which I was only able to find and experience one game of. It became a laggy, bugged mess when you combine this pursuit and match it with the few other far away people playing the game.

With regards to the story and its themes, I can’t work out what Dollhouse wants to be. Gameplay will also have you collecting writings on wall to help fill scripts at the end of each level, which piece together bits of the story and also help you increase the ‘fame’ level of your character. This is where Dollhouse loses me largely. I think Dollhouse is trying to be a piece about the cutthroat competition and virality of Hollywood, but then it’ll take this weird psychological direction (including some overtly poor implied sexual violence) which left me feeling aimless.

In short, Dollhouse is a game I unfortunately wouldn’t recommend to anyone. At the very least I wouldn’t anytime soon and especially not for its current large retail price. With some fixes the game’s aspirations may yet shine through and make this at least a decent campy exploration in the horror genre some time in the future. For now at least, players can only help but wonder what could’ve been.