Ever since Fire Emblem made it to the cool kid’s table and finally got big in the west, there has been many an argument over the series’ newer features. While some dislike the new focus on character relationships and anime-like designs, others would never have picked up the games without them. With such a large divide between fans,  I held dubious hope that Fire Emblem: Three Houses would manage to satisfy both sides of the schism.

I’m what you might call a new Fire Emblem fan. That is, I haven’t played any of the games before Awakening for the 3DS. I can’t remember a time before player avatars and quirky, anime-style characters. But when I play Fire Emblem: Three Houses, I think this is what  the classic games must feel like. It’s less over-the-top and more like an epic fantasy military fable. Each chapter flows like a fairy tale, beginning with a lovely narrated prologue detailing the new season and the culture of the fantasy land of Fódlan, setting you up to actually care about the world and its people.

You play as a former mercenary, who is brought on as a professor to teach the up-and-coming students of the Officer’s Academy at the holy monastery, Garreg Mach. Similar to Fire Emblem: Fates, you must choose your path: which of the three houses will you lead? I chose the house of the Black Eagles, lead by the awesome axe-wielding princess Edelgard. And while I can’t speak to how much the story differs, I am incredibly pleased with my choice. I’ll not spoil it for you, but there are enough surprises in store to take you off-guard.

You can’t try out the units before you choose your house, which initially infuriated me. I mean, how am I supposed to choose when I don’t even know their abilities and stats? That’s when the true genius of Three Houses hit me: all of that stuff is completely customisable.

The classic weapon triangle – Swords, axes, and lances – still exists, but the spotlight is set firmly on weapon rankings. In previous games, gaining a rank in a weapon meant that you could use a sword made of steel instead of iron… not very exciting.

In Three Houses, the entire class system is rebuilt around these rankings. Do you think Petra will be more useful as a pegasus rider than a thief? Tell her to hit the books until she can pass the flying exam! There are no limits to what a student can learn, which makes managing your units fantastic fun. Gone are the days of having to drop your favourite character just because you don’t like using their class.

The totally revamped Class system is honestly a delight to play with, and I spent hours poring over the possibilities. Your students can grow into almost any class they wish, as long as they have the prerequisite weapon skills.

There are some gender-locked options. Sadly female units can’t become Brawlers, a unit that specialises in grappling. Male units cannot become Grimoires, a unit with expertise in magic. This is a disappointing, antiquated way of classing units. Thankfully, there are so many options to choose from that in the end I wasn’t left wanting. Still, though, Nintendo and Koei Tecmo really need to stop doing that.

Battalions, a new addition to the battle mechanics, are a great idea that I feel could have been implemented a little better. You can equip a battalion to an eligible unit for higher defense and a special attack called a ‘Gambit’, allowing for some devastation damage. But as the game progresses they become less overpowered, and I often resorted to using regular weapon attacks. They’re still useful in specific situations, but I feel like there are better ways to use this mechanic.

Honestly, I love them far better as set dressing. The battalion will react to your unit’s actions, cheering when they succeed and running for cover when they’re bombarded by an attack. It makes the battle feel like it has more weight, and is a nice reminder that your students are not the only people caught up in this war. 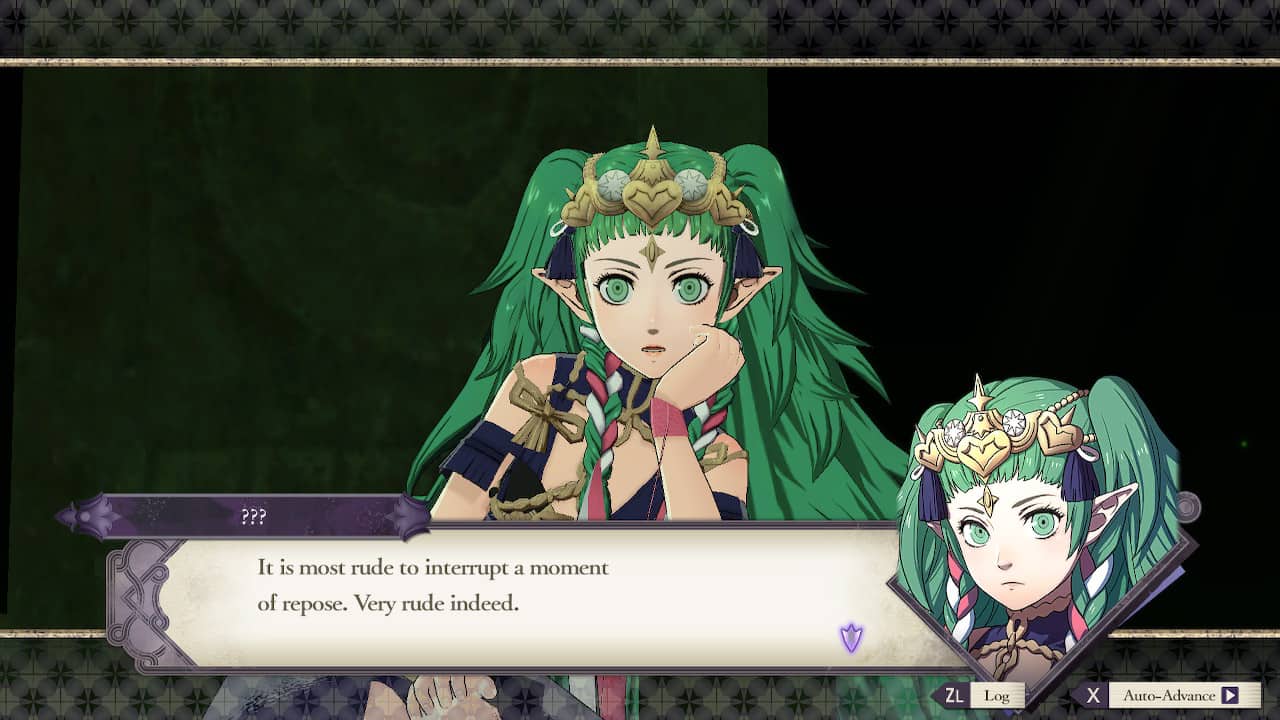 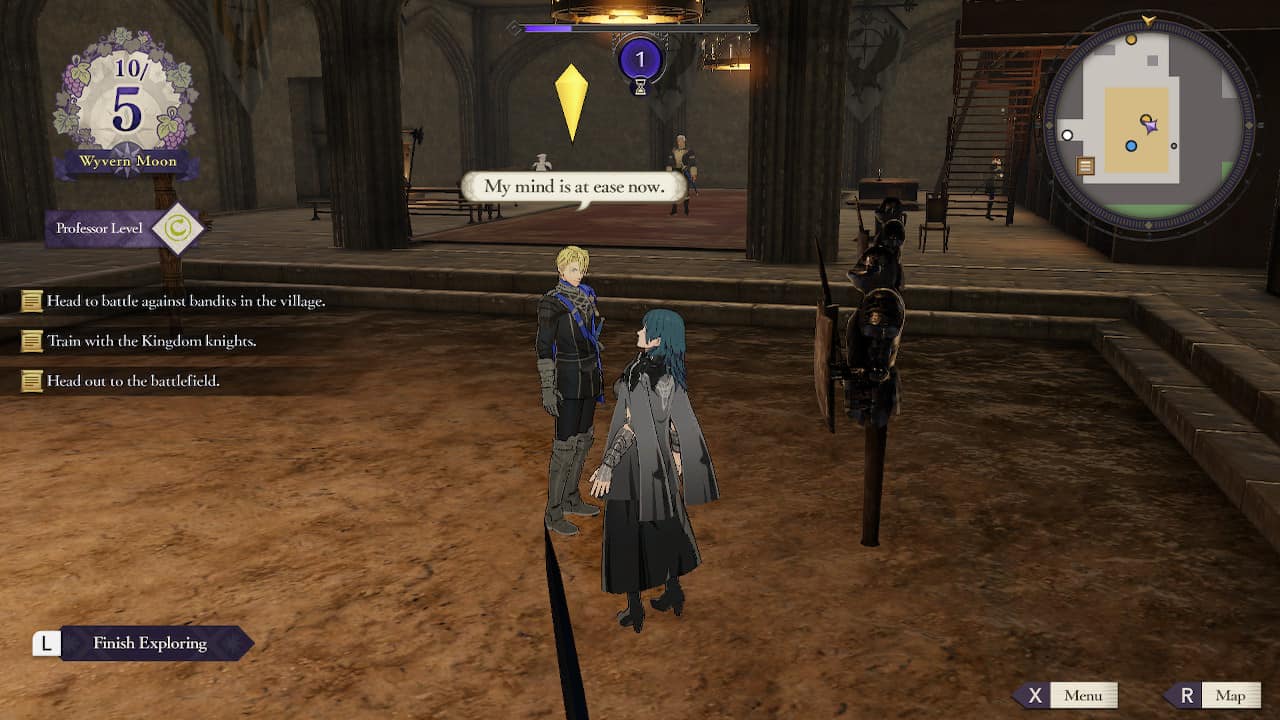 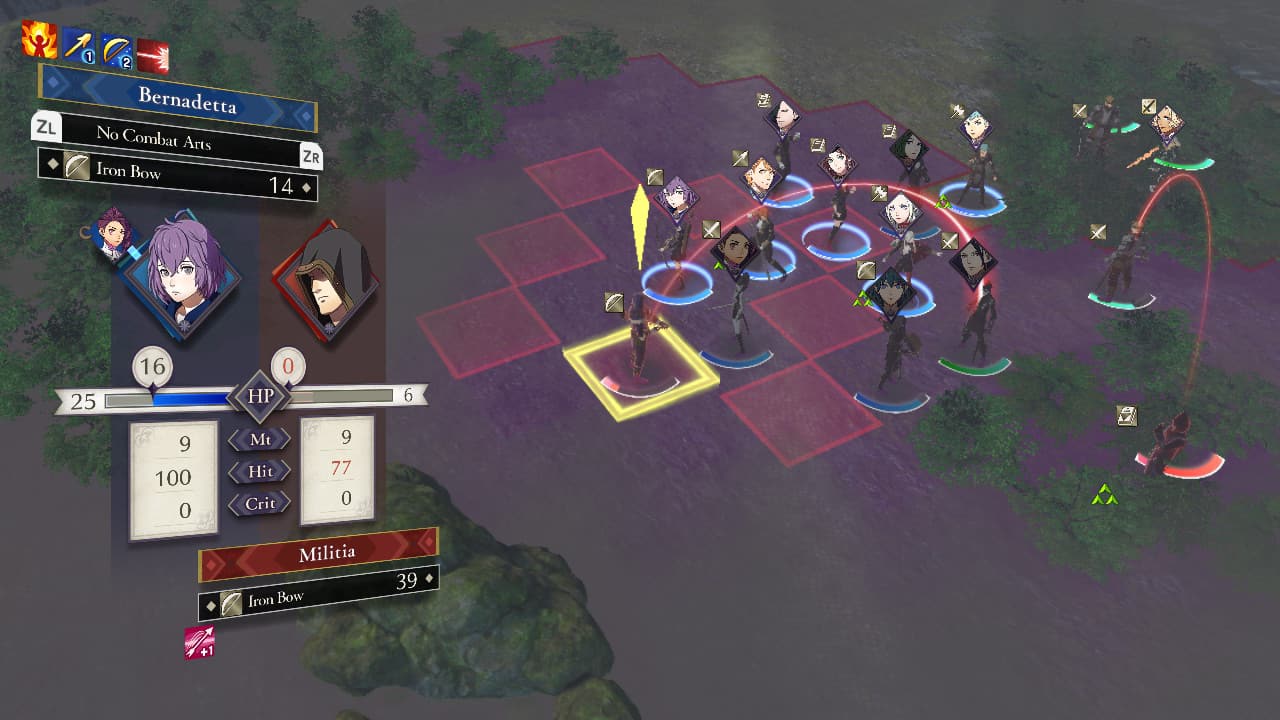 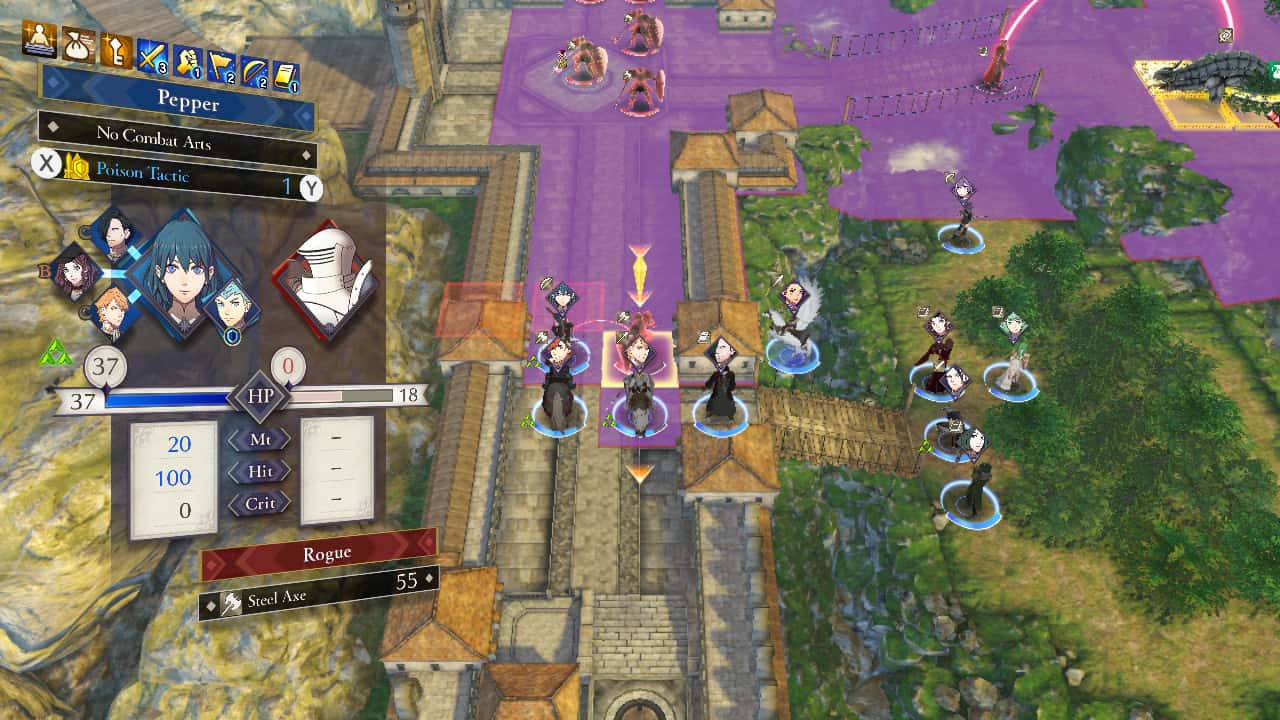 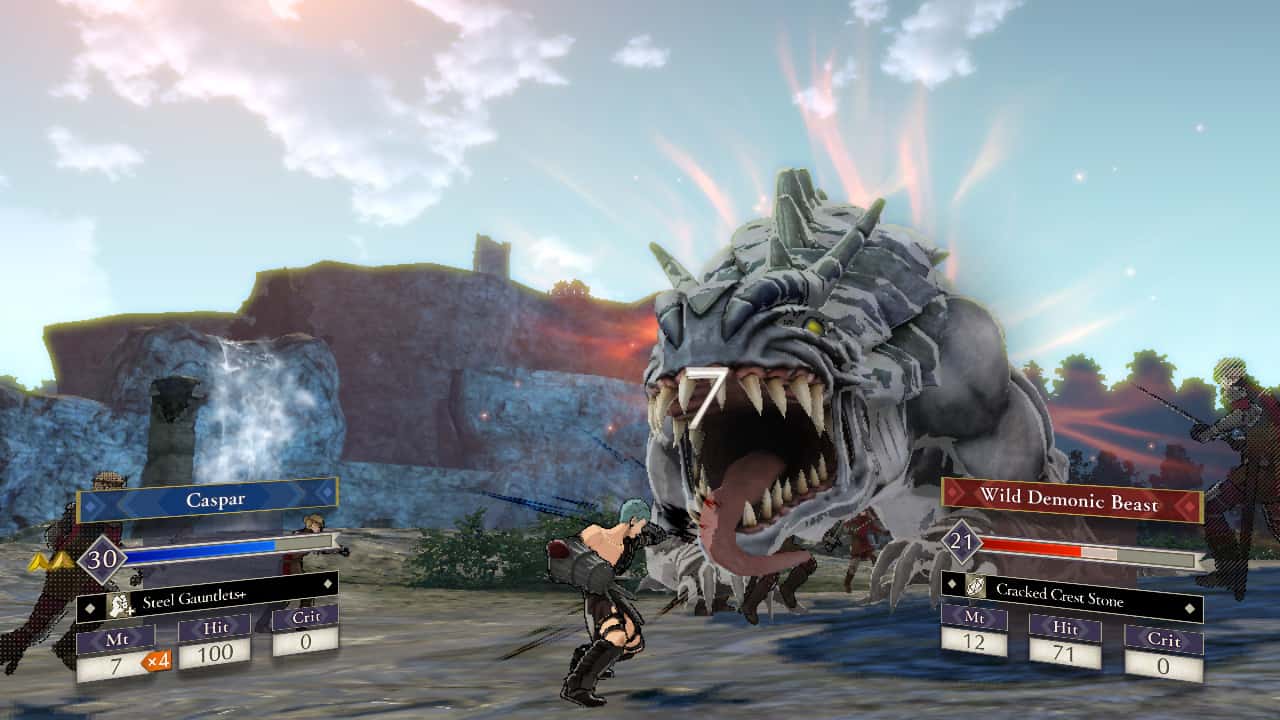 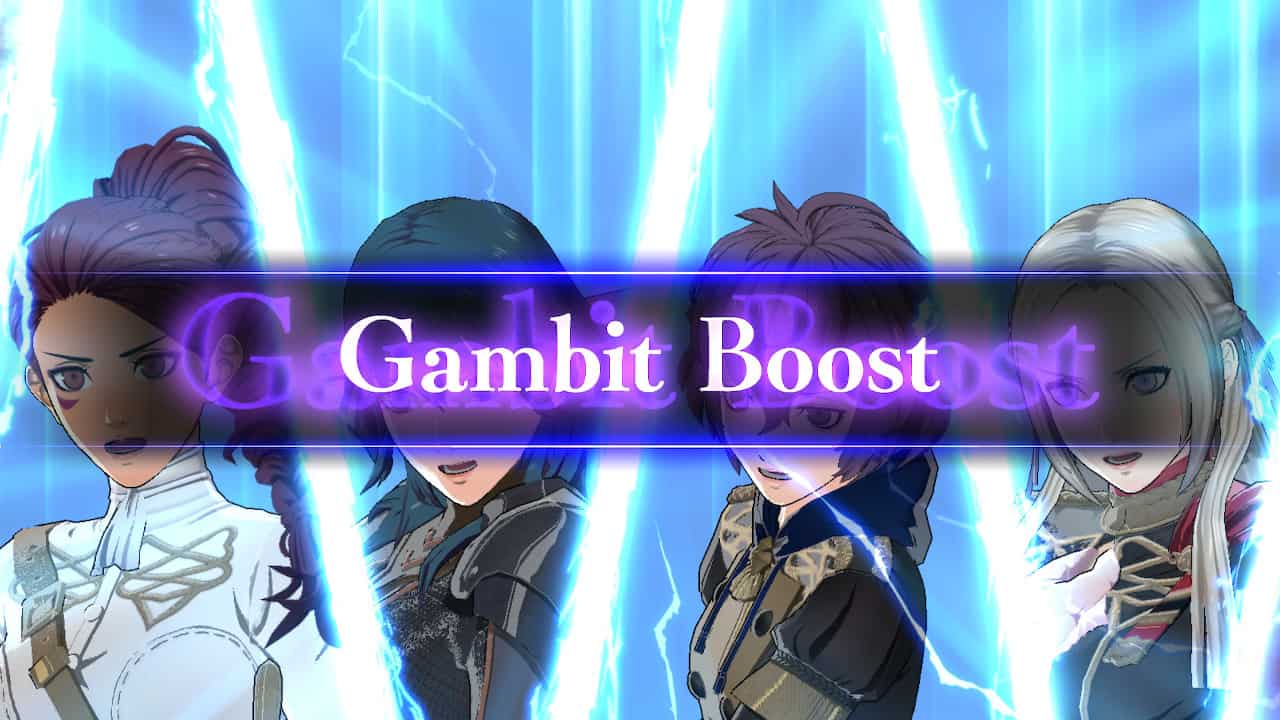 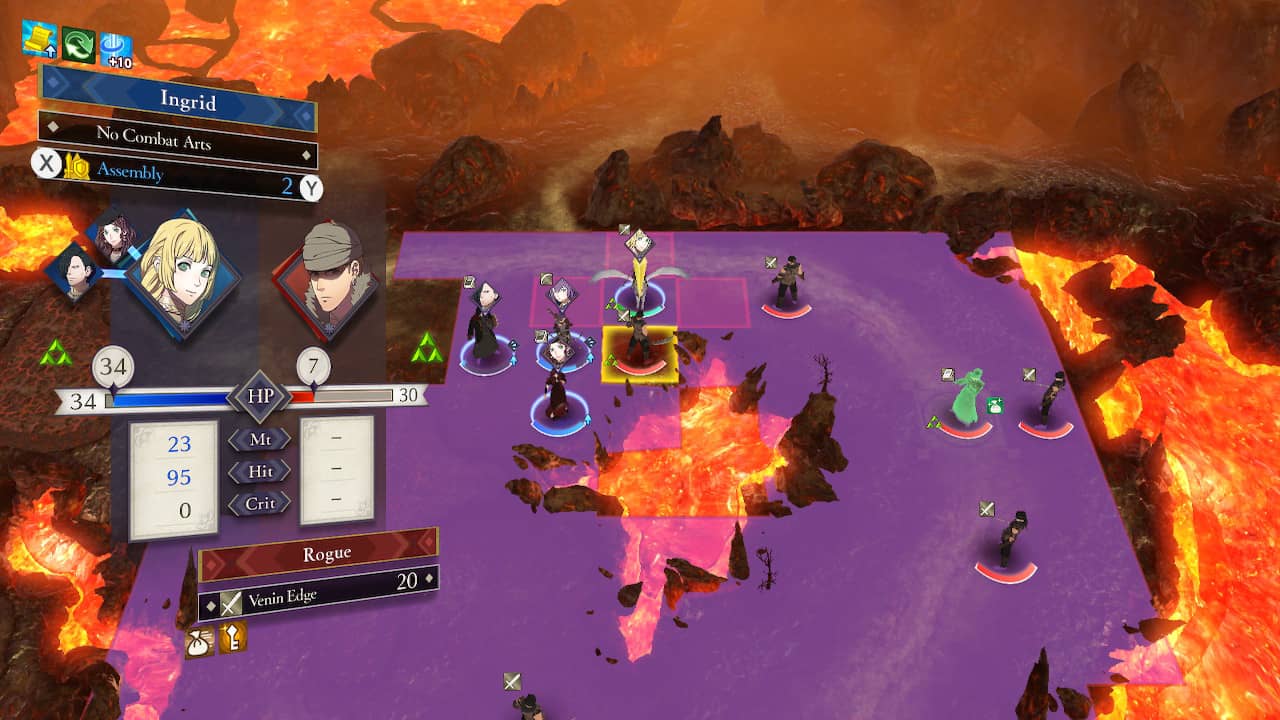 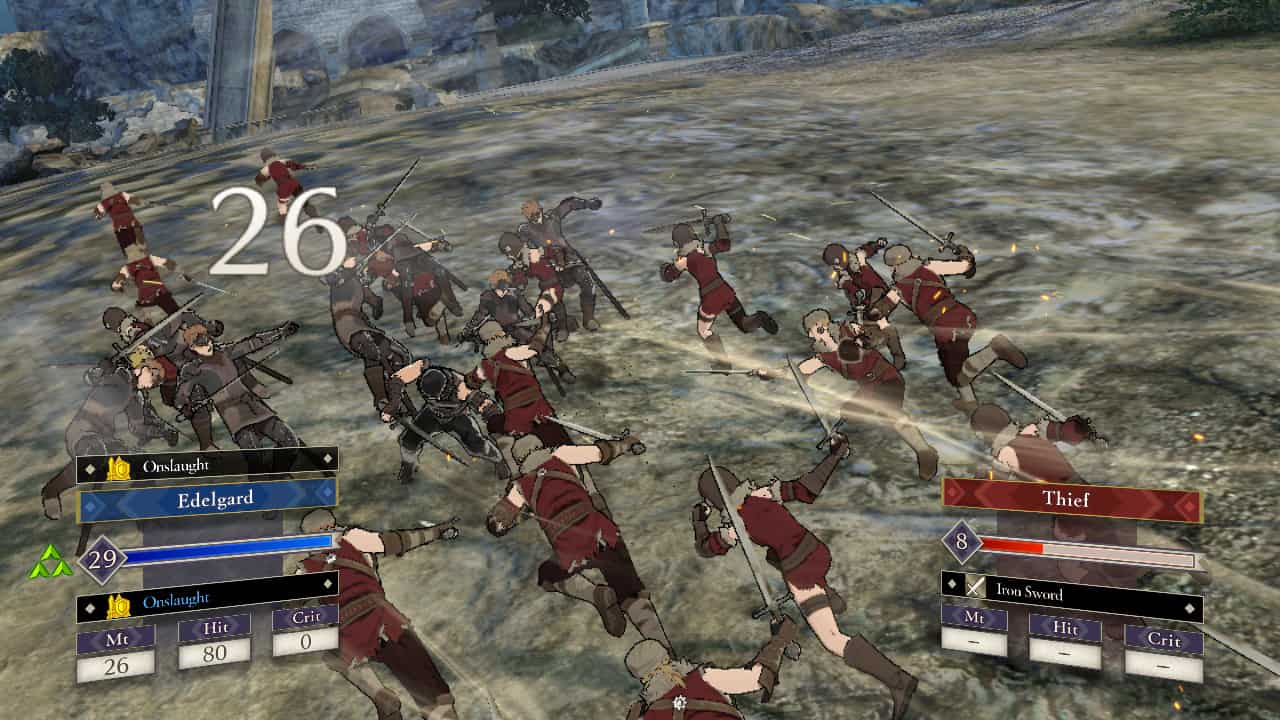 The whole look of Fire Emblem: Three Houses is just amazing. Fluid battle animations bring excitement to the classic turn-based combat, not to mention the detail that went into the environment and the magical effects.

Support conversations among units are all the better for it too. Character talking animations still look a little stiff, but it’s on par with other Japanese titles of today. Fire Emblem has never looked so good, and it does wonders in bringing the battlefield, and Garreg Mach, to life.

Despite the additions to the battle system, the real focal point of Three Houses is the monastery of Garreg Mach. For the first time in Fire Emblem history, we have a lively hub world to explore and interact with. Garreg Mach acts as our home base, and it’s weaved into both the story and the gameplay. The Professor (or Pepper, as I named her) has more ways to interact with the game world than any previous Fire Emblem protagonist, and that hasn’t gone to waste.

There is a lot to do in the monastery, and you can easily spend way too much time training, fishing, and chatting with your students. It does mean there is a lot more downtime between battles, enough that you can spend more than an hour without fighting a single battle. It’s great that there’s so much to do, but you can get tired of it all pretty quickly. Those who play Fire Emblem for the story and characters will love every moment, and those who play for the battles, well… you can skip almost all of the monastery segments.

In Awakening and Fates, part of the fun of supports was playing matchmaker: pair up a budding couple and watch them marry and even have a child.  Even in Fates this was beginning to feel a bit fetishy, so I am pleased to see that Three Houses has toned it down. There’s less of a focus on love and more on genuine connection, though some Supports showed potential to grow into a romance.

As the professor, you alone can achieve support rank S with a character of your choosing – although once again, LGBT options are sadly limited. With just two bisexual men and a handful of bisexual women, it’s better than we’ve gotten before, but still not exactly welcoming.

A lot of effort has gone into making the player fall in love with its characters. Each one is fun and engaging without going too far down the ‘oh so quirky’ rabbit hole that I feel Fates did too much. They have relationships separate from the Professor. They’ve lived as students, friends, and political rivals long before the professor showed up, and they treat each other like it. Some of the backstories and motivations are genuinely touching, and I was frankly surprised at the depth of the supports. 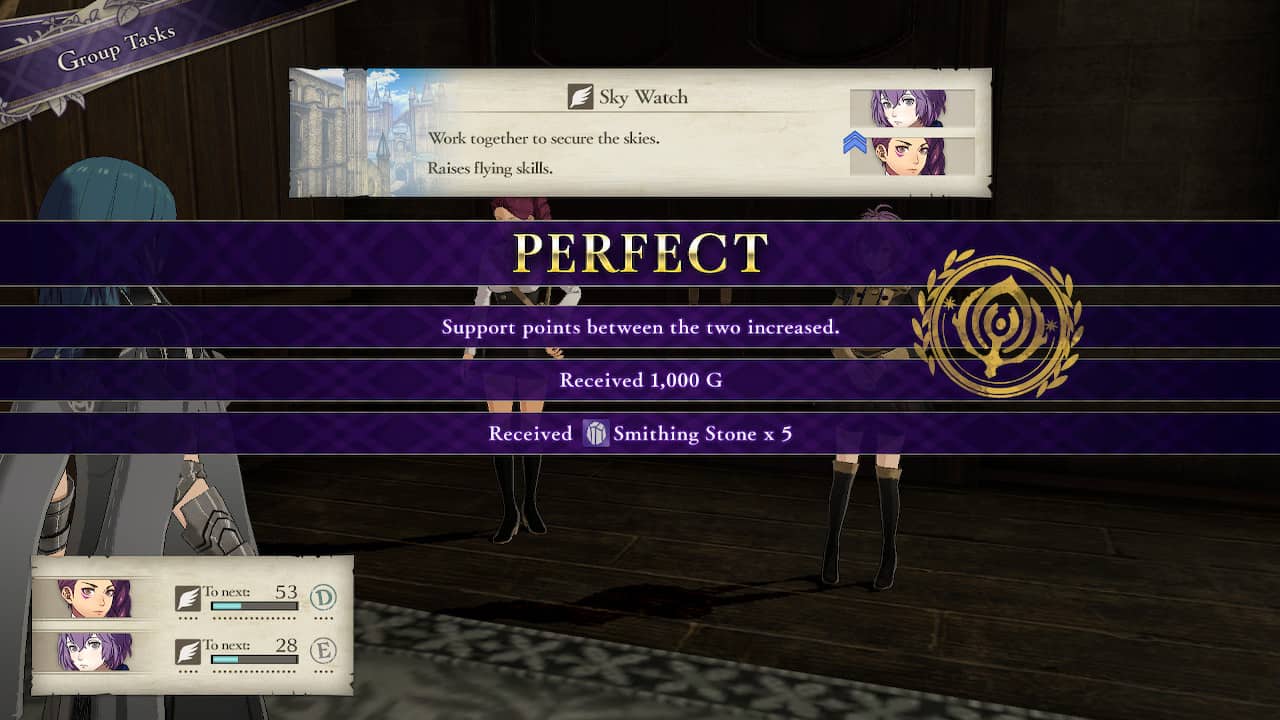 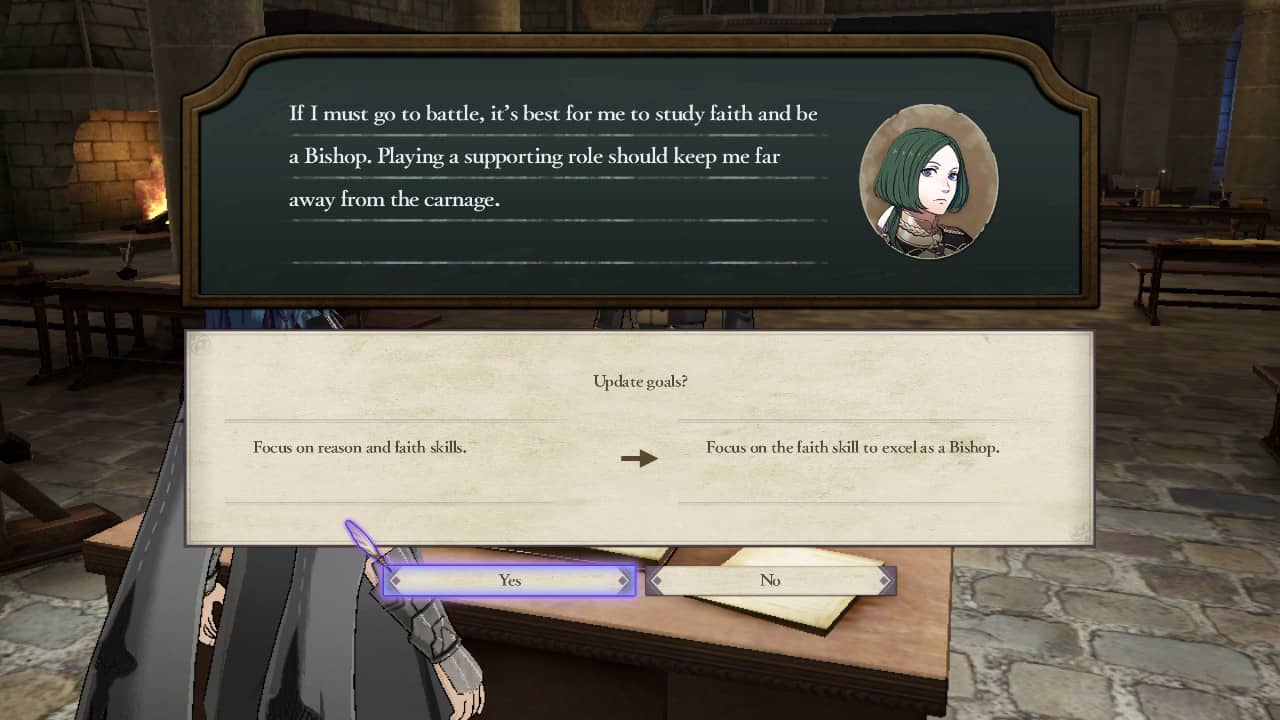 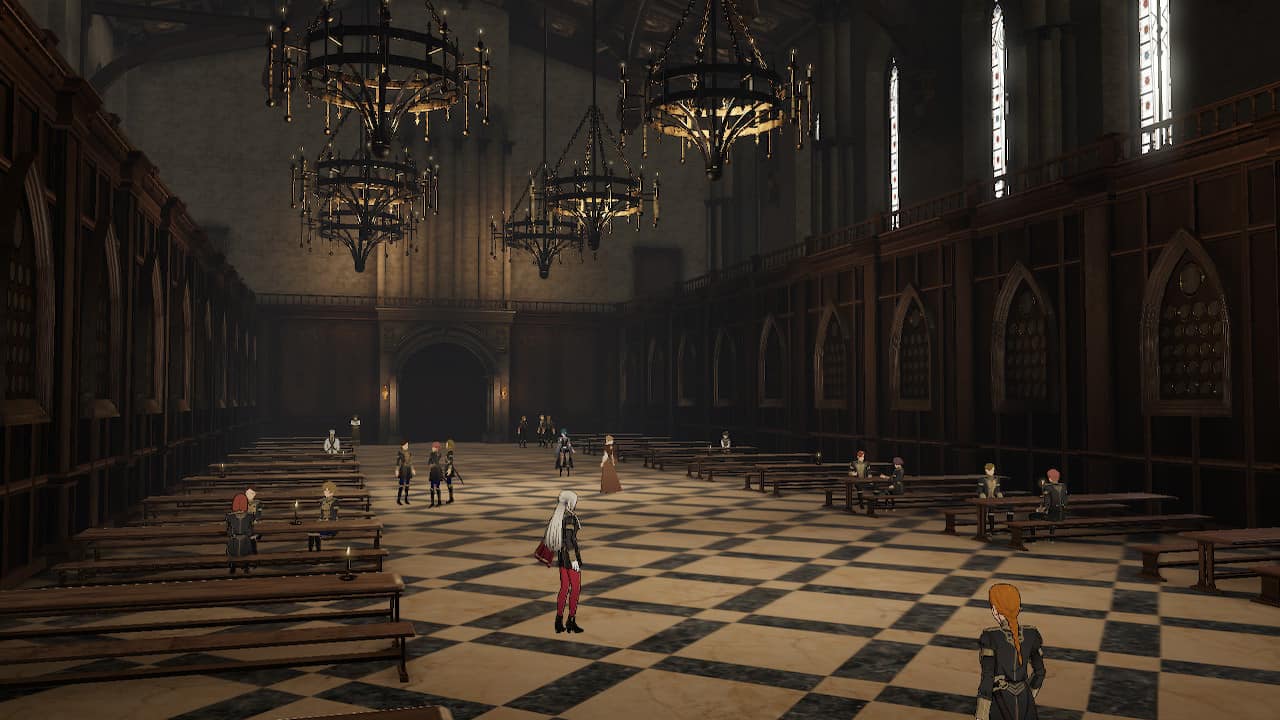 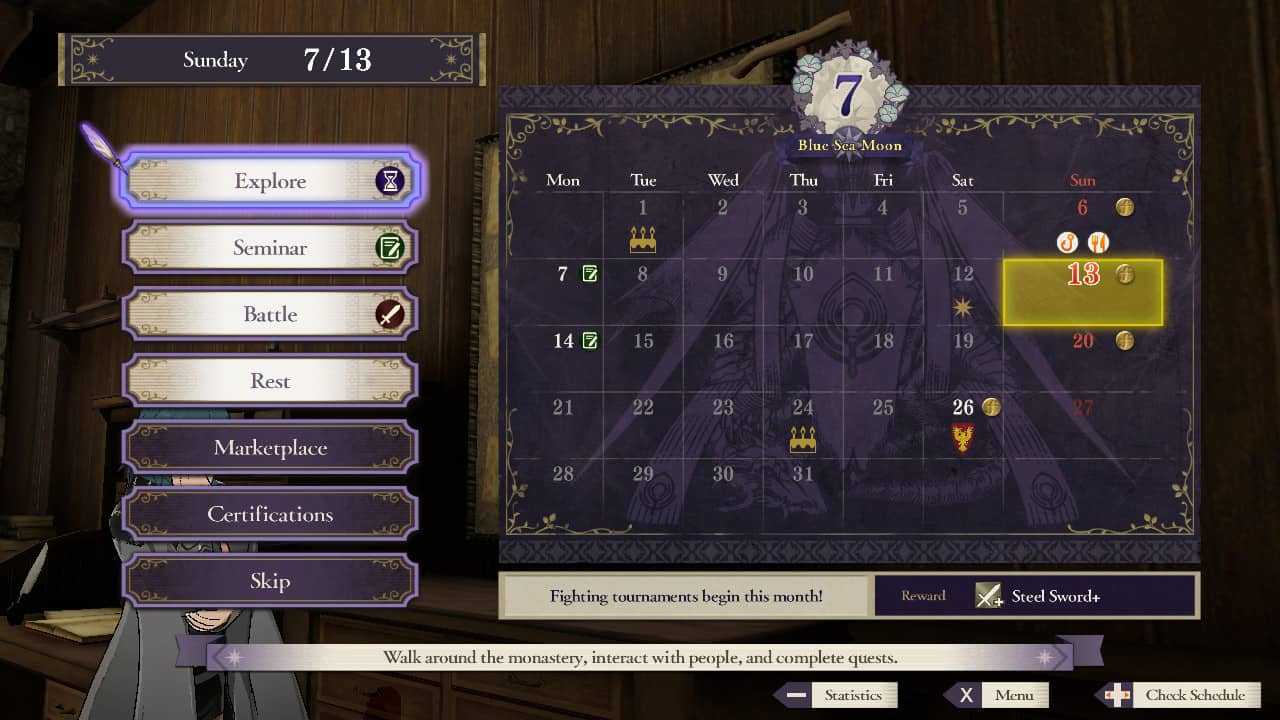 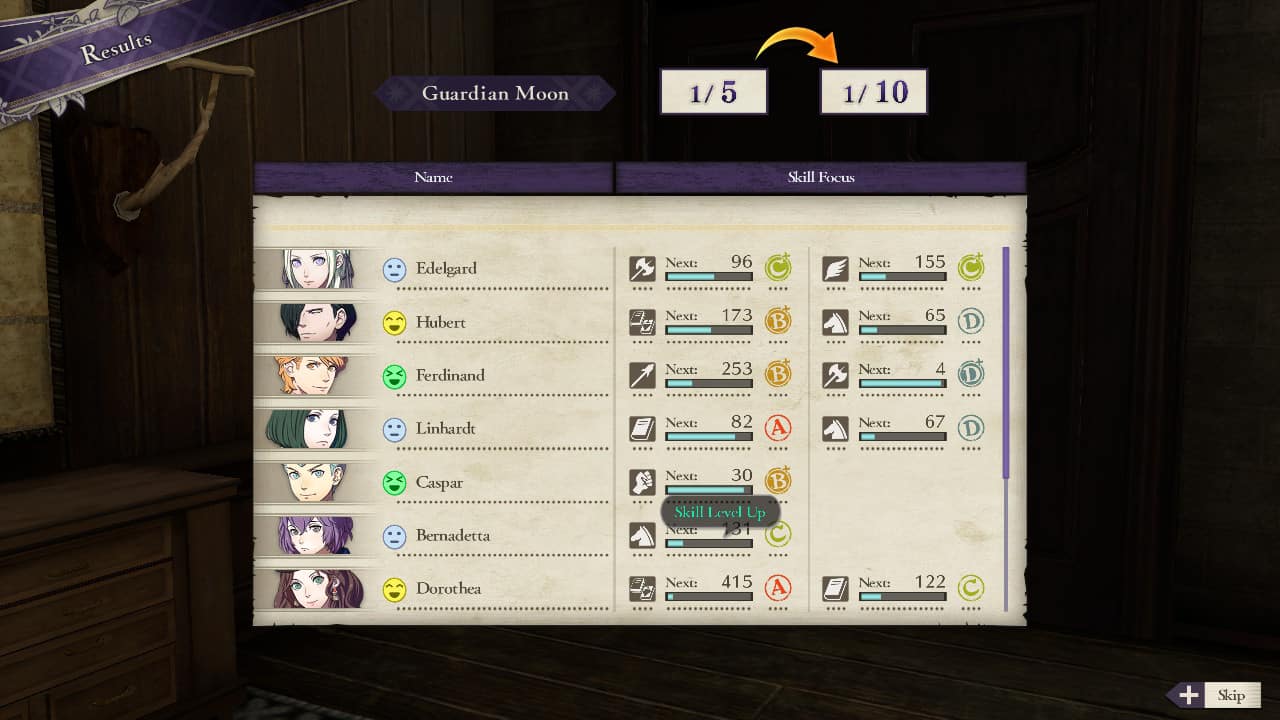 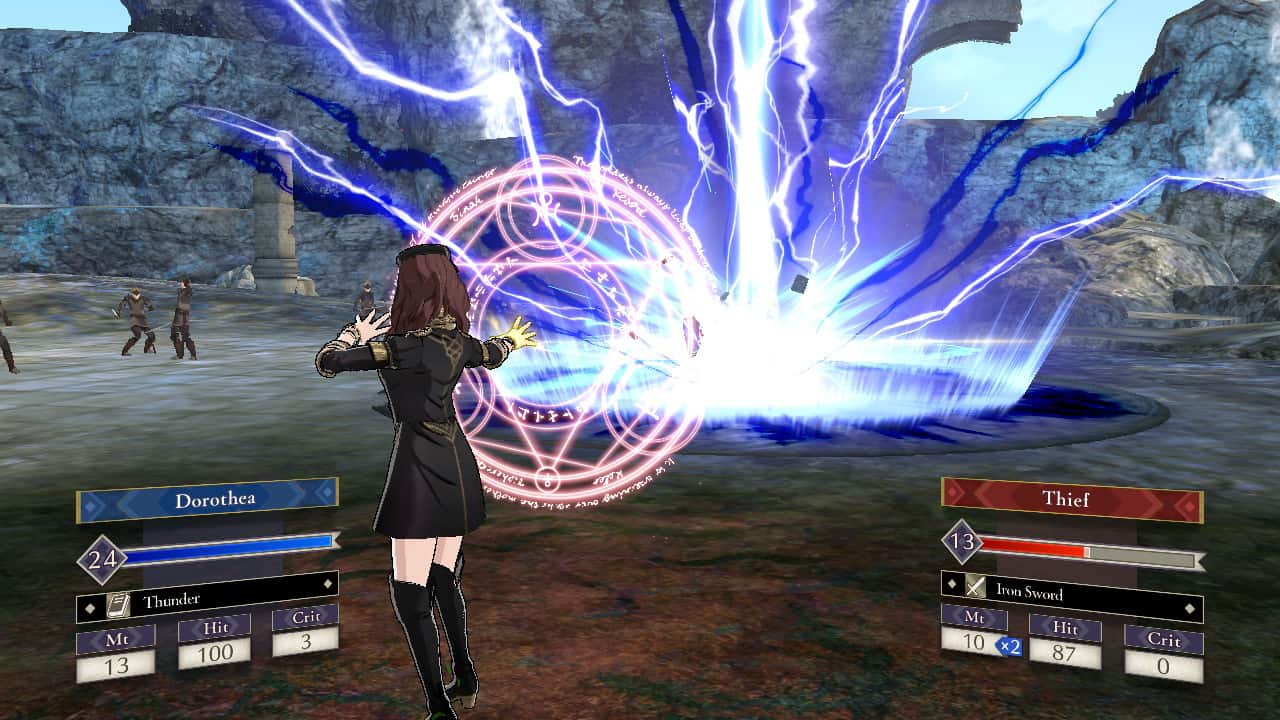 “With everything it does right, I wish Three Houses didn’t pull its punches so much when it comes to difficulty.”

With everything it does right, I wish Three Houses didn’t pull its punches so much when it comes to difficulty.  Part of what makes the strategy in this series so enjoyable is the random element: will my unit hit, or miss? If I try a risky manoeuvre, will it pay off? Will the enemy score a critical hit? Frustratingly, I found that element kind of lacking here.

Playing on normal difficulty, most of the challenge I found was in the terrain, or because of an unusual objective. But I always felt over-levelled, despite not having been obsessively grinding.  And I can’t prove it, but I swear I got way more critical hits than I deserved. I was averaging 5 or more on a single map, compared to a whopping 2 on the enemy’s side… in the whole game! Maybe I was just lucky, but the feeling that someone’s thumb was on the scale never left me.

I love the balance Fire Emblem: Three Houses struck. You can micromanage as much or as little as you want. Without your input, your students will choose their paths on their own. You can soak up as much of Fódlan’s lore as you want, or skip monastery segments altogether. The class system is more fun than ever, and I don’t mind admitting that the story made me shed a tear or two. If you’re a  Fire Emblem veteran, I would suggest choosing the hard difficulty from the get-go. Otherwise, you might not be left with much challenge. Despite that though, the epic 20+ hour adventure is worthy of upholding the Fire Emblem series.

Fire Emblem fans both old and new will love Three Houses. It’s got the best of both worlds: the interesting maps and epic military adventures from older titles, while building on the newer aspects we’ve come to expect from the 3DS games. Despite it feeling too easy at times, the new class system and awesome battles left me more than satisfied. If this is the path Fire Emblem will continue to tread, it will be a high road indeed.