My Friend Pedro is a fluent ballet of creative violence and hyper-stylistic movement. It’s a journey that will have you smashing through windows at one moment, and talking to your sentient banana friend at the next.

The game is beautifully bananas, primarily because your journey is being guided by a floating, sentient banana called Pedro. This journey will have you gun down foes attempting to stop your progression in one of the most creative and stylistic ways I’ve ever encountered.

My Friend Pedro is a sidescroller that gives you a banana-load of gameplay options as you progress through the narrative. At a basic level, these gameplay options will allow you to dodge bullets, slow down time, and flip off walls whilst gunning down your foes. It all works together beautifully and creates moment after moment that feel like they were pulled right from an action film.

At a deeper level, the gameplay will open up and allow you to shoot two foes at once, swap weapons mid-battle, ricochet bullets off surfaces, ride skateboards and even more. It’s crazy and stupid but that’s the whole point. My Friend Pedro doesn’t hold back and tries to help the player live their most ludicrous action movie fantasies – and it works.

The game also allows you to view gifs of your action movie moments. In fact, after each level is complete, the game will automatically create a gif of your gameplay. It’s an amazing idea from a marketing perspective, allowing people to circulate these great moments to all their friends. But it’s also just great for the player, because the first thing I wanted to do was share the fun I was having, and this game allowed me to do so. It is unfortunate that the gifs were auto-generated, because there were certainly some moments far better than others. I’m not sure how the moments were picked, but it often turned out to be something far less impressive than other potential moments. Nonetheless, I’m very glad this creative and fun feature exists. 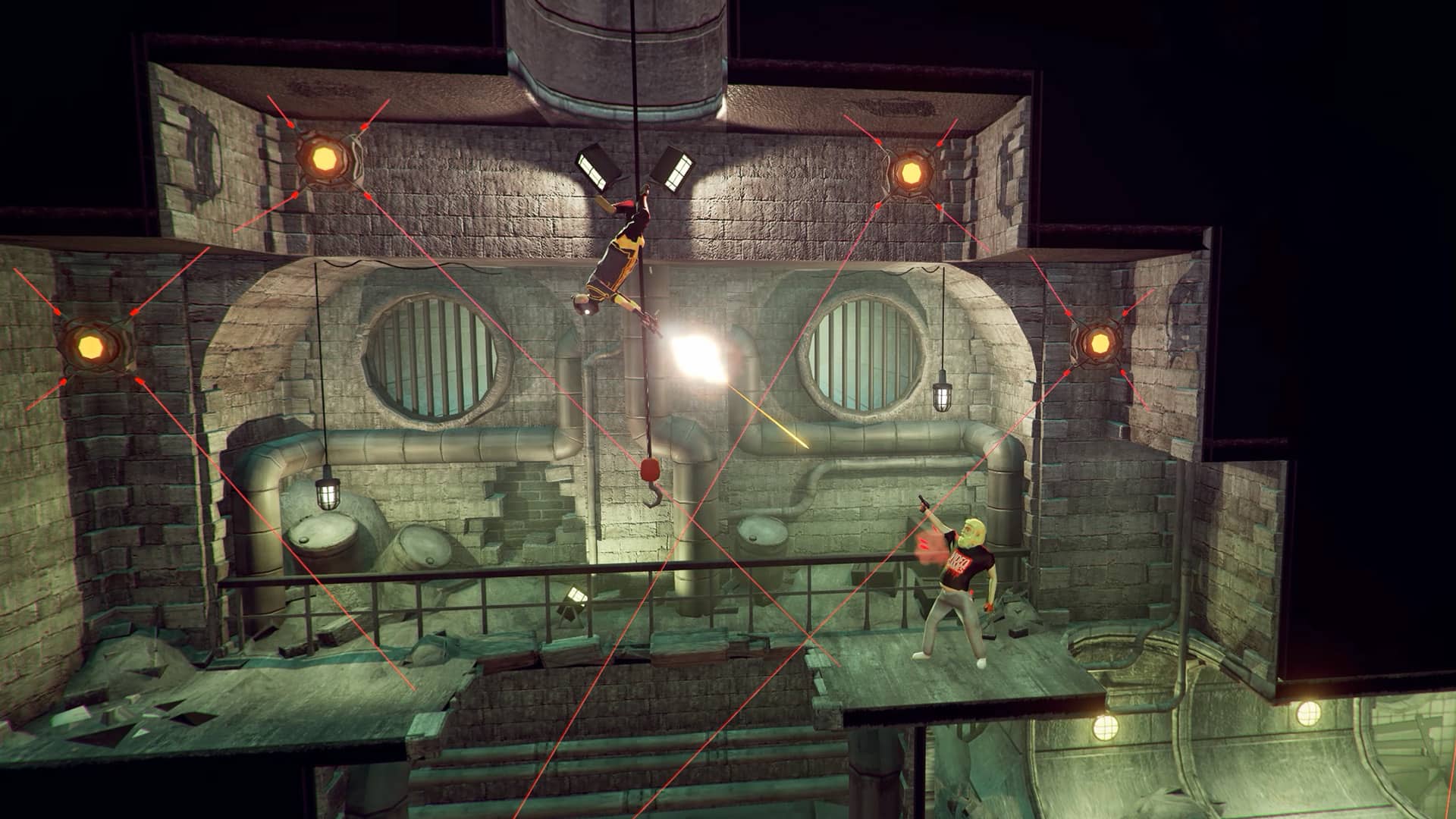 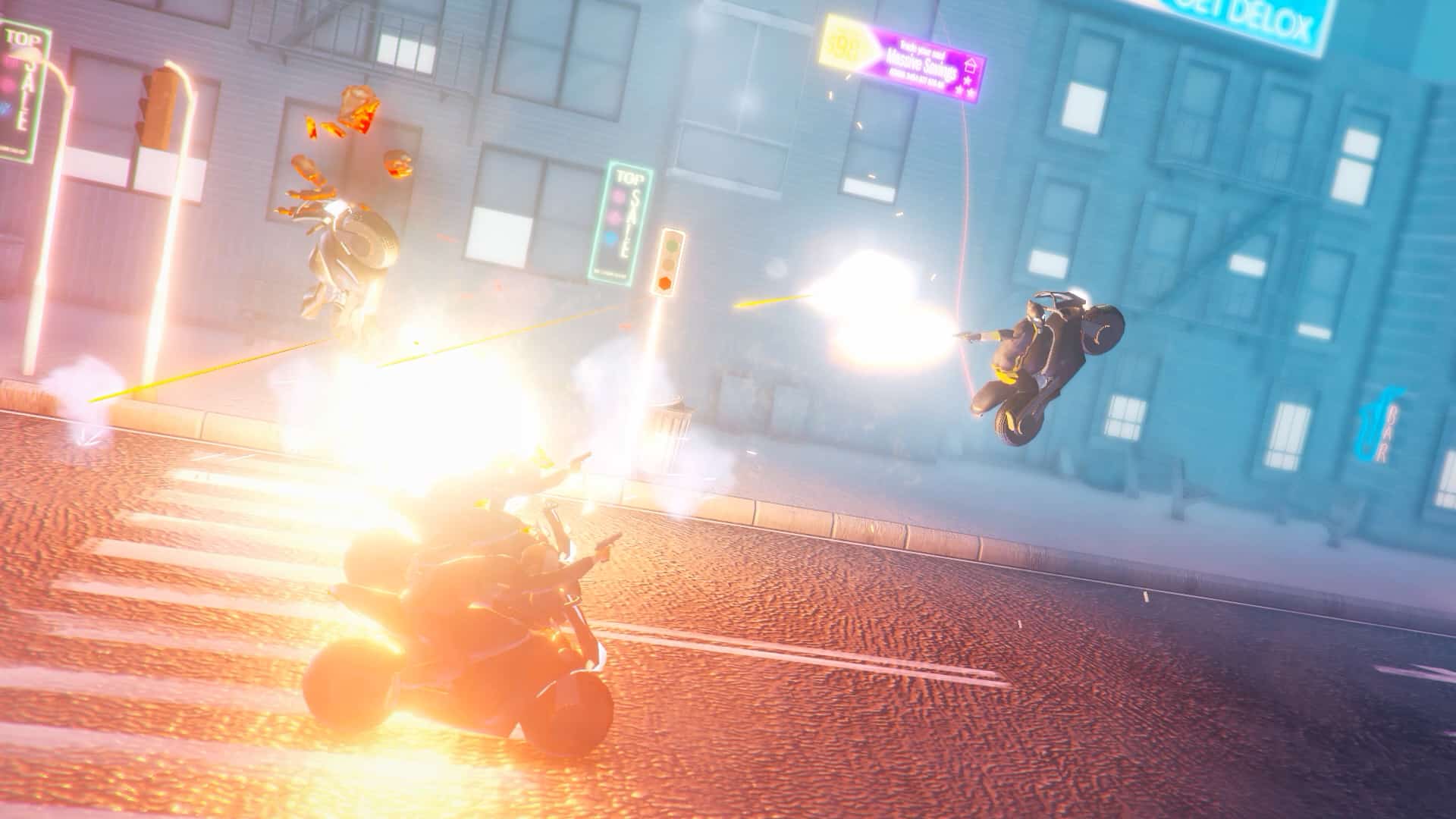 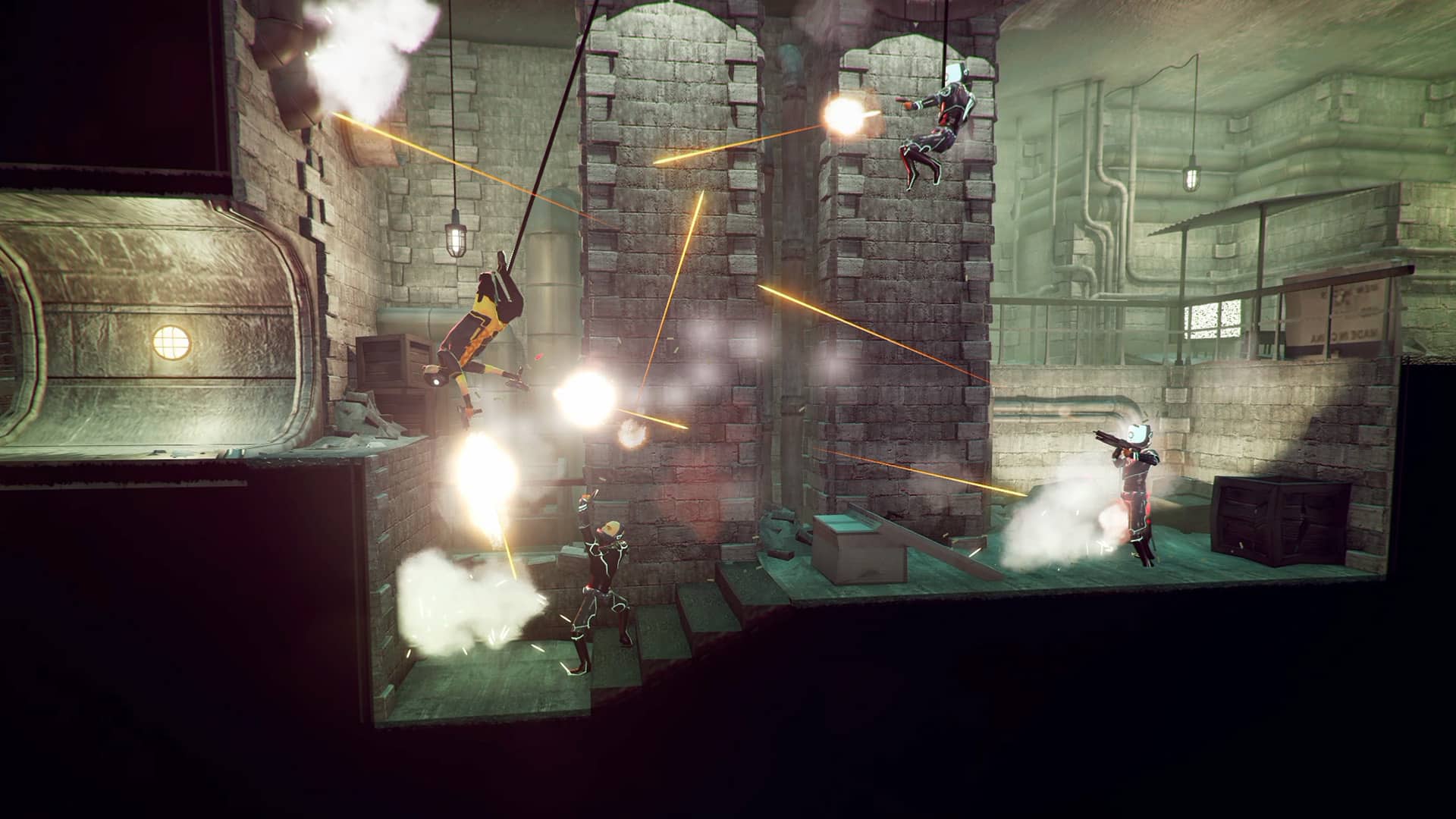 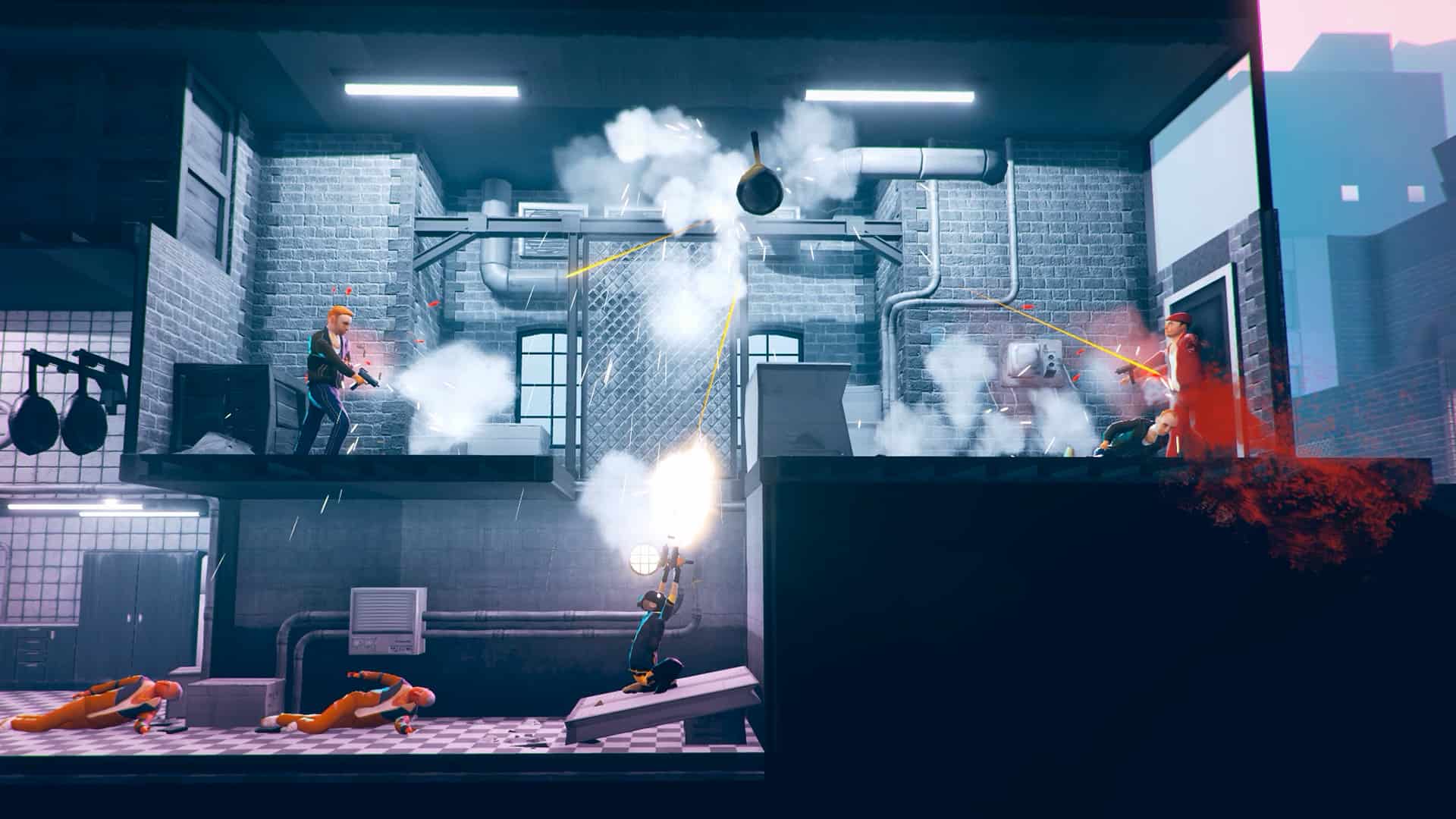 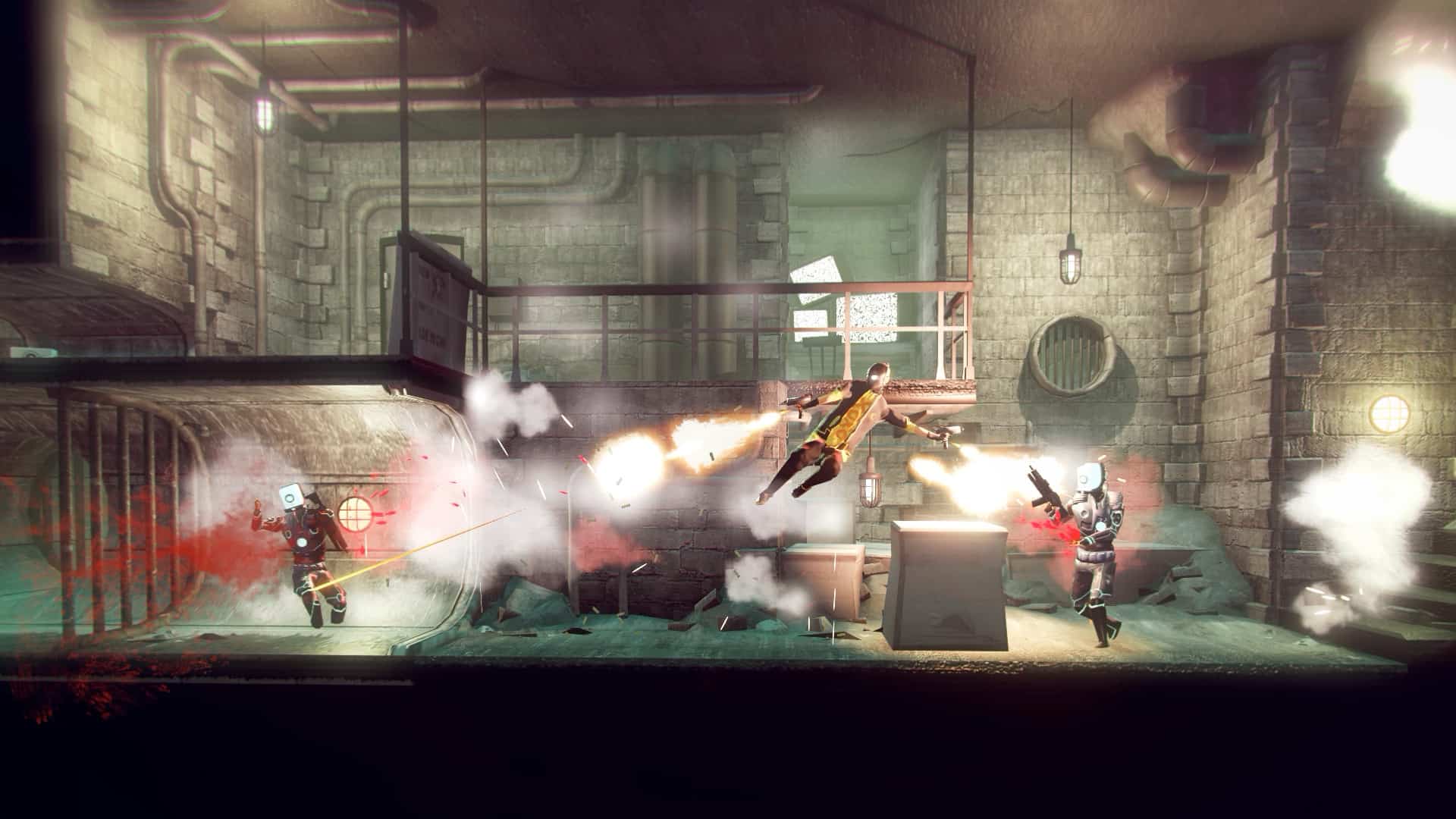 The animation of the main character is really impressive. There’s so much action and so many jumps, flips and rolls that the game needed super smooth and responsive animations to keep up. It also allows the stunts and action of the game to feel the way it should. After all, this is a game entirely dependant on the fun of the crazy action that’s in front of you.

I can’t stress enough how fun My Friend Pedro is from a strictly action sequence perspective. We’re talking about moments of gameplay that involve dropping down a rope upside, guns akimbo aiming at two different foes, and blasting them to shreds all in slow motion. We’re talking about moments like riding your skateboard through a glass window, leaping over a gap to the rooftop of the next building, and shotgunning an explosive barrel that blasts a group of foes apart all before landing the jump.

The game is impressively fun, although I did have a moment of realisation by the end. My Friend Pedro always lays out a plan for you to progress. It plants items, enemies and structures in a perfect way that there is a clearly defined path that the developers wanted you to follow. In a way the entire game feels a bit like a tutorial of when and why you’d use the different techniques and mechanics at your disposal. This tutorial is certainly expected, the unexpected part is that it never really ended. The game didn’t open up in a way that allowed you to tackle any given segment in your own unique yet effective way. Don’t get me wrong, following the path the developers laid out for you was still incredibly satisfying. Yet not quite as satisfying as discovering your own, unique action movie moment would have been

Overall, I found My Friend Pedro to be a hell of a lot of fun. It’s a game with a sole focus. It wants the player to feel powerful and bad-ass as they jump from moment to moment through action-movie combat sequences. With that focus in mind, this game absolutely succeeds. Yea it might be a bit silly, but silliness isn’t a negative. Silliness grants the ability for a game to go in ludicrous directions for the pure and simple fun of it. It allows the game to stop restricting itself through the lens of reality and just go balls-to-the-wall, or… bananas-to-the-wall in this case.