Age of Wonders: Planetfall Review – Venturing out into a beautiful, engaging and otherworldy landscape

Set hundreds of years after the fall of the galaxy’s central government, Star Union, each faction has had to find their own way to deal with the chaos that followed; while a faction like the Vanguard immersed themselves in a centuries-long cryosleep, the Dvar used the years after the government’s fall to specialise in terrain manipulation techniques, allowing them to survive in harsh environments and sabotage their enemy colonies’ terrain. In total, the game offers players six different playable factions to choose from, each with a unique set of perks and drawbacks.

Once you’ve decided on a faction, the game offers you two modes to play: campaign or scenario mode. Regardless of whether it’s a scenario or a campaign, each play-through is set on a unique planet with different sets of resources. I found campaign mode a particularly interesting way to learn more about factions, their motivations, and their backstories. In one campaign planet, for example, you can play as the Kir’Ko race, insect-like people who were enslaved before the fall of Star Union, as they try to carve out a new future for their kind, highlighting the horrors the Kir’Kos once had to live through.

Another way Age of Wonders: Planetfall elaborates further on its story is through its six NPC factions. The game allows you to interact with each NPC faction in-game through missions, and in each playthrough, you can encounter several different factions scattered across the landscape. Some have been around since the Star Union days, while others only came into being when the galaxy’s government fell. One such NPC faction is the Psi-fish. Unlike the Paragon – Star Union’s faction of former elite citizens – these beings only came out of the void after the collapse of the central government, wiping out entire settlements to expand their territory.

Each of these factions has their own quirks, and if you choose to complete missions for one particular faction for certain rewards, your relationship with another might deteriorate. Doing too many missions for one faction while neglecting the others might cost you, especially if opposing players have better relationships with them. In this regard, I found that when it comes to NPC factions, the Age of Wonders: Planetfall diplomacy system has quite a lot of depth to it, encouraging players to weigh every decision carefully before committing to one.

The face of your faction, both at the negotiation table and on the battlefield, is your commander. Chosen before launching the game, not only do you have the option to customise the commander’s looks according to your personal taste, but you can also select several aspects to do with your commander’s skills, characteristics and personal background. Your chosen traits will influence your strategy and gameplay, allowing you to start the game with certain benefits in diplomacy or in combat.

If your commander was in the diplomat corps before the fall of the government, for example, this might translate to you generating relationship points at a faster rate in-game. Alternatively, you might opt for a veteran commander who is already specialised in certain fighting tactics, which will come in useful on the battlefield. The game even gives you an option to select a vice for your character, ranging from being cruel to your subjects to being a party animal, both of which can impact your diplomatic relationships and your cities’ production capacity. 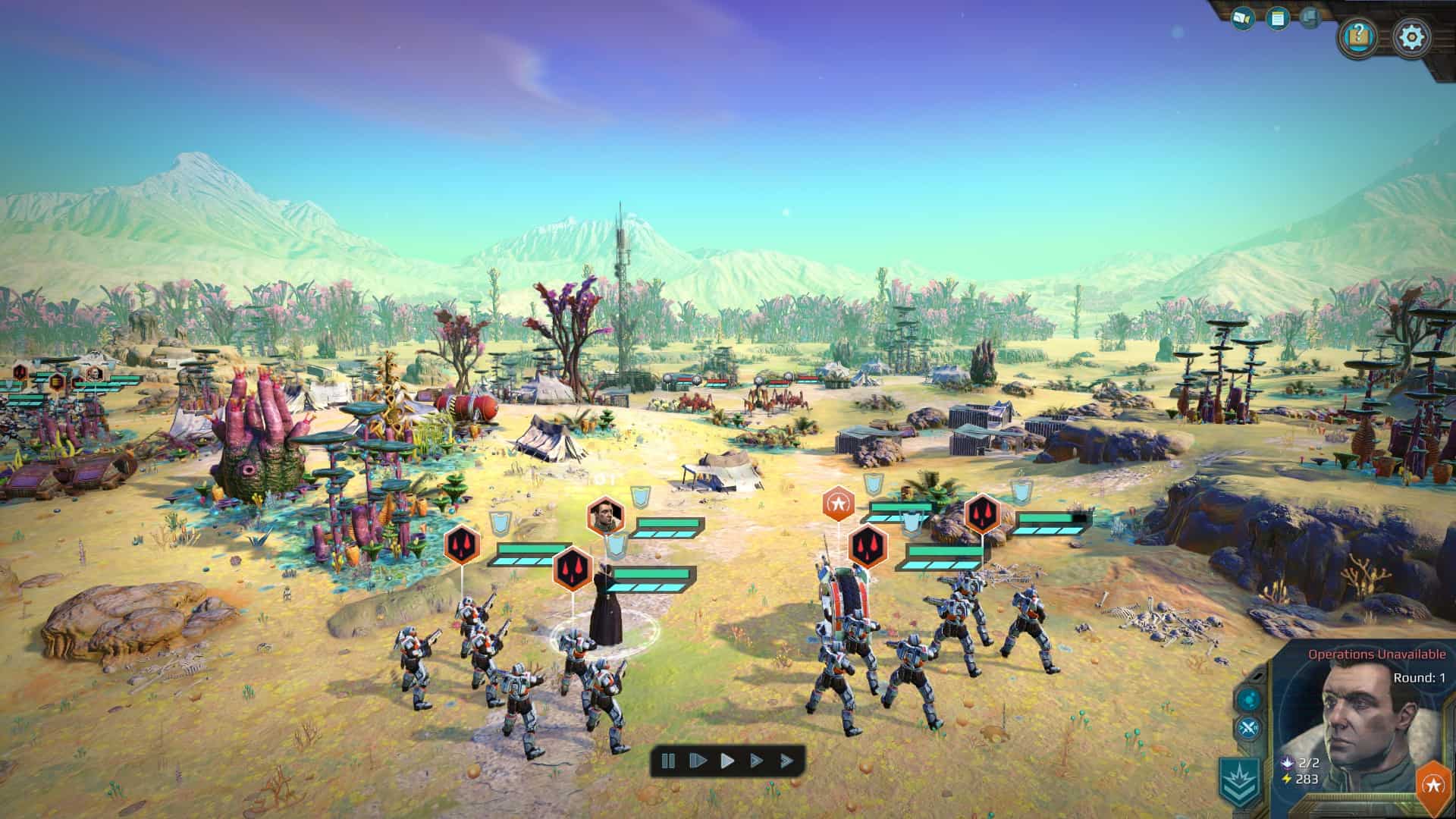 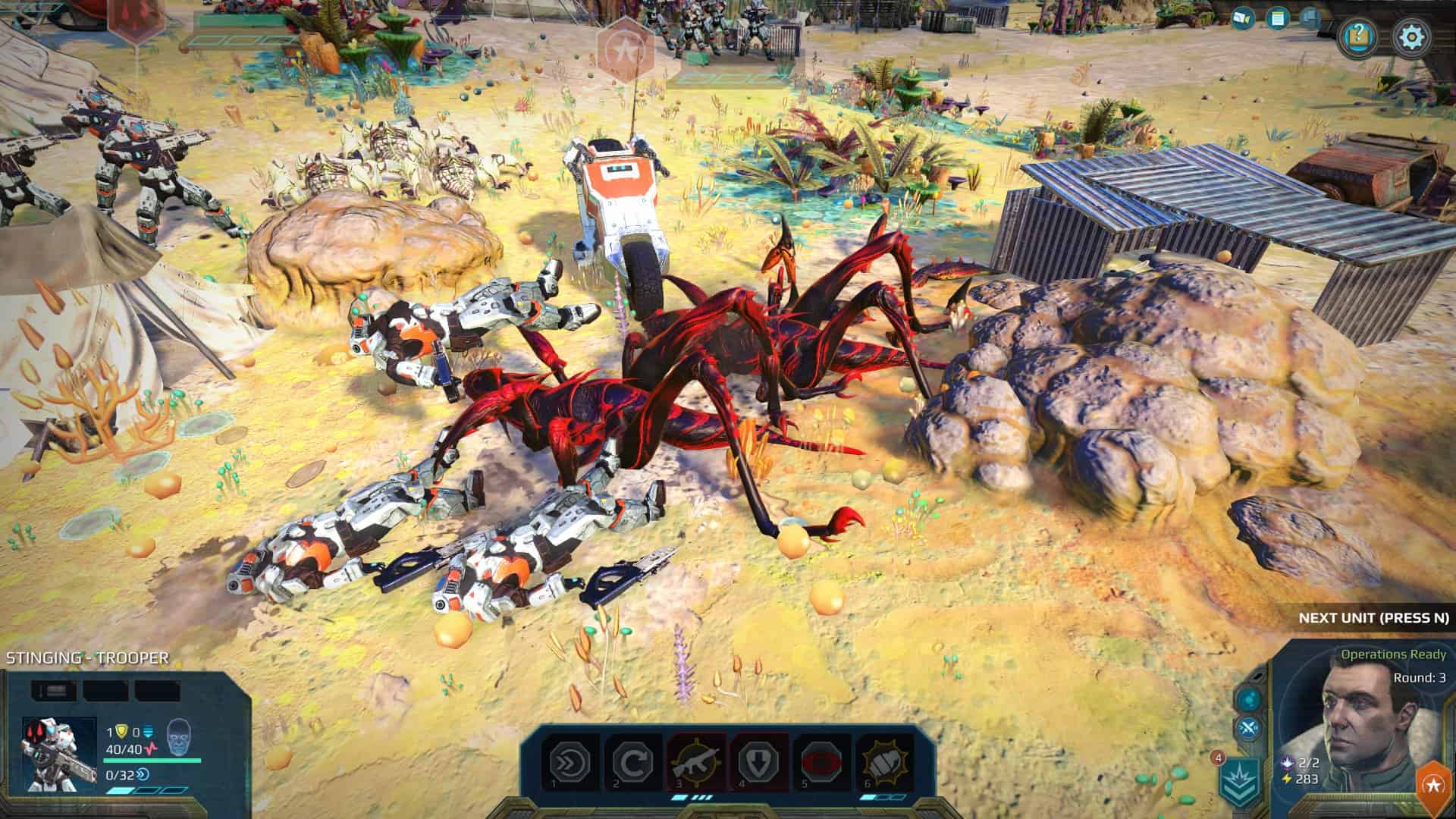 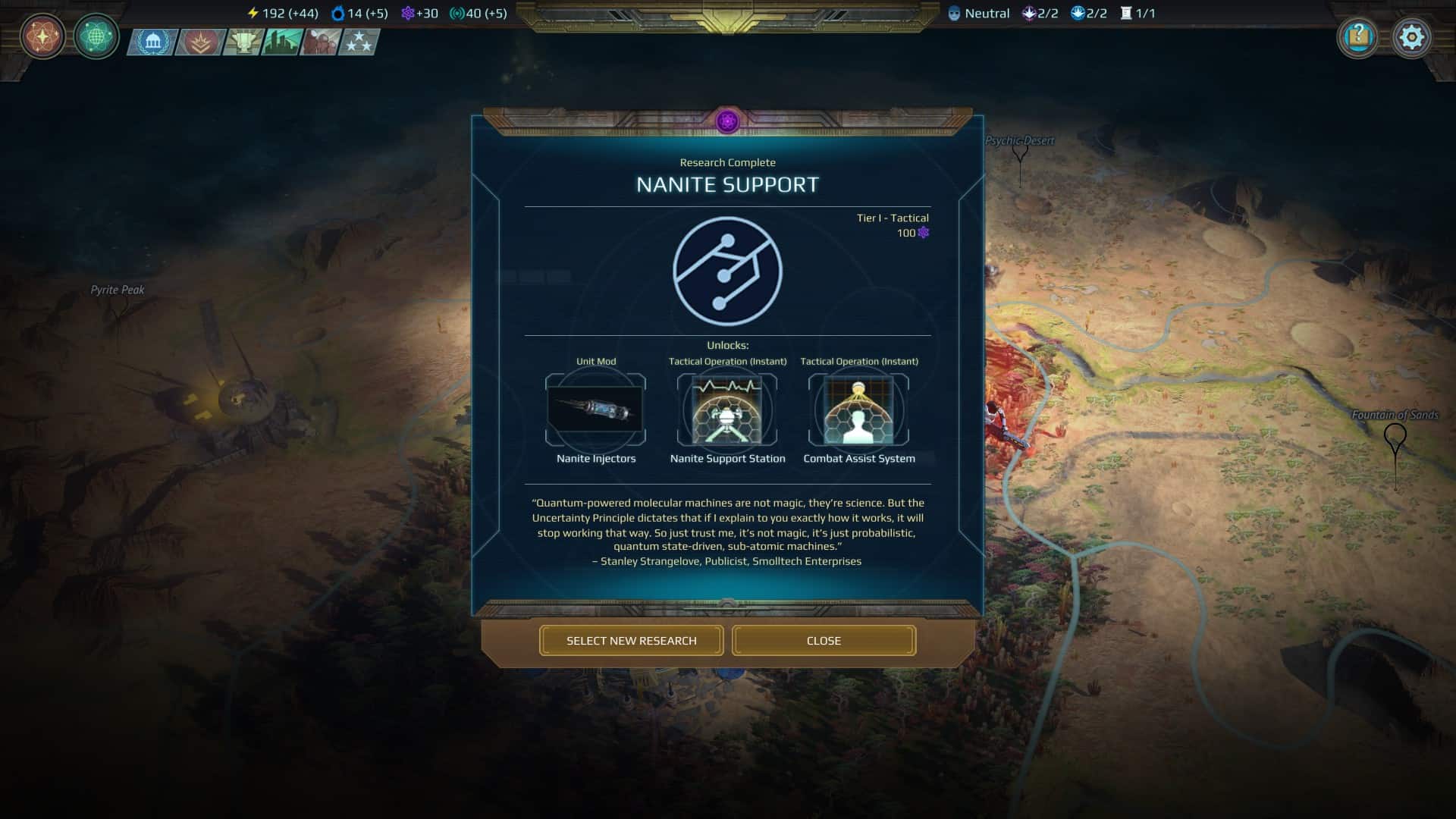 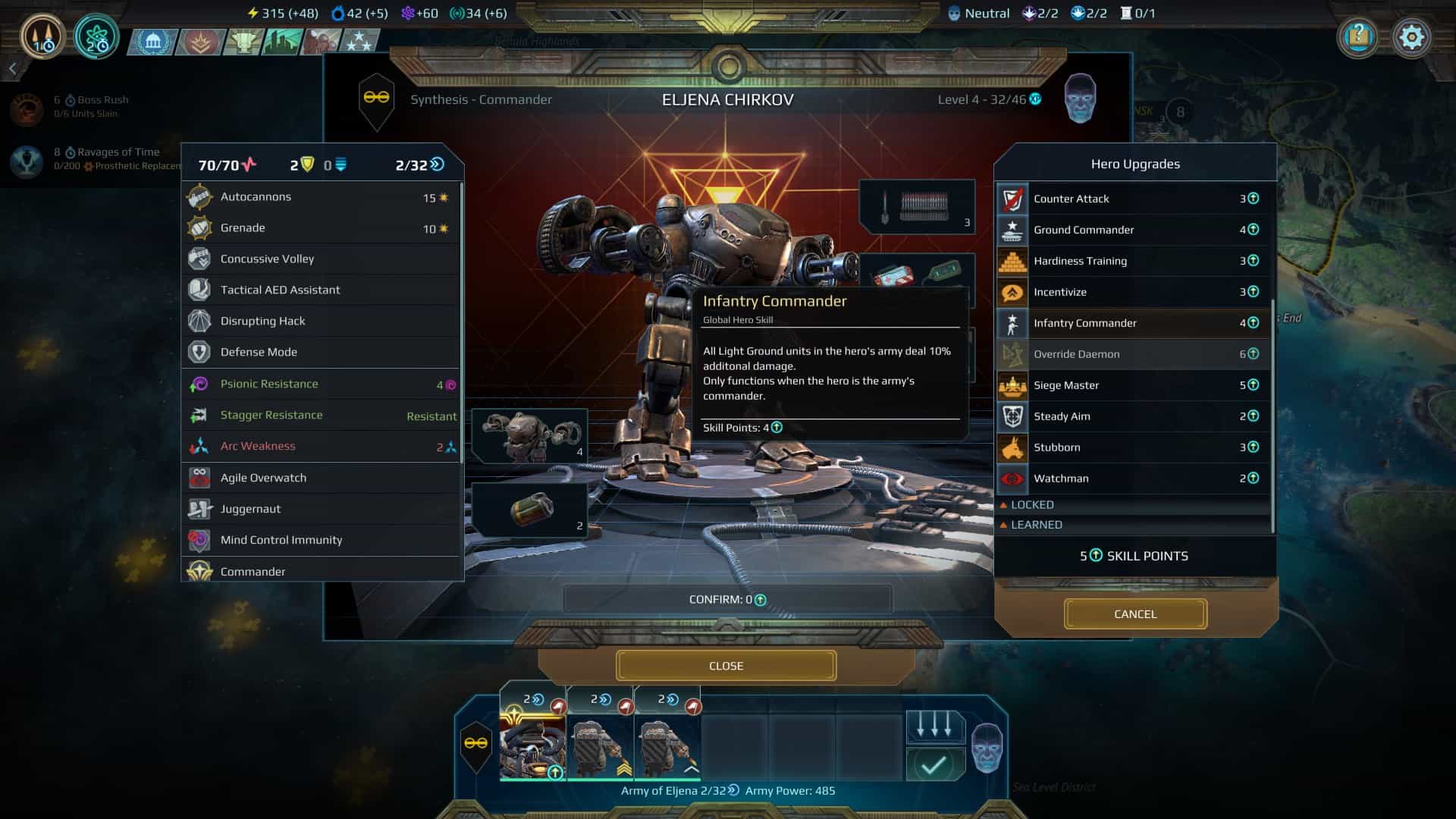 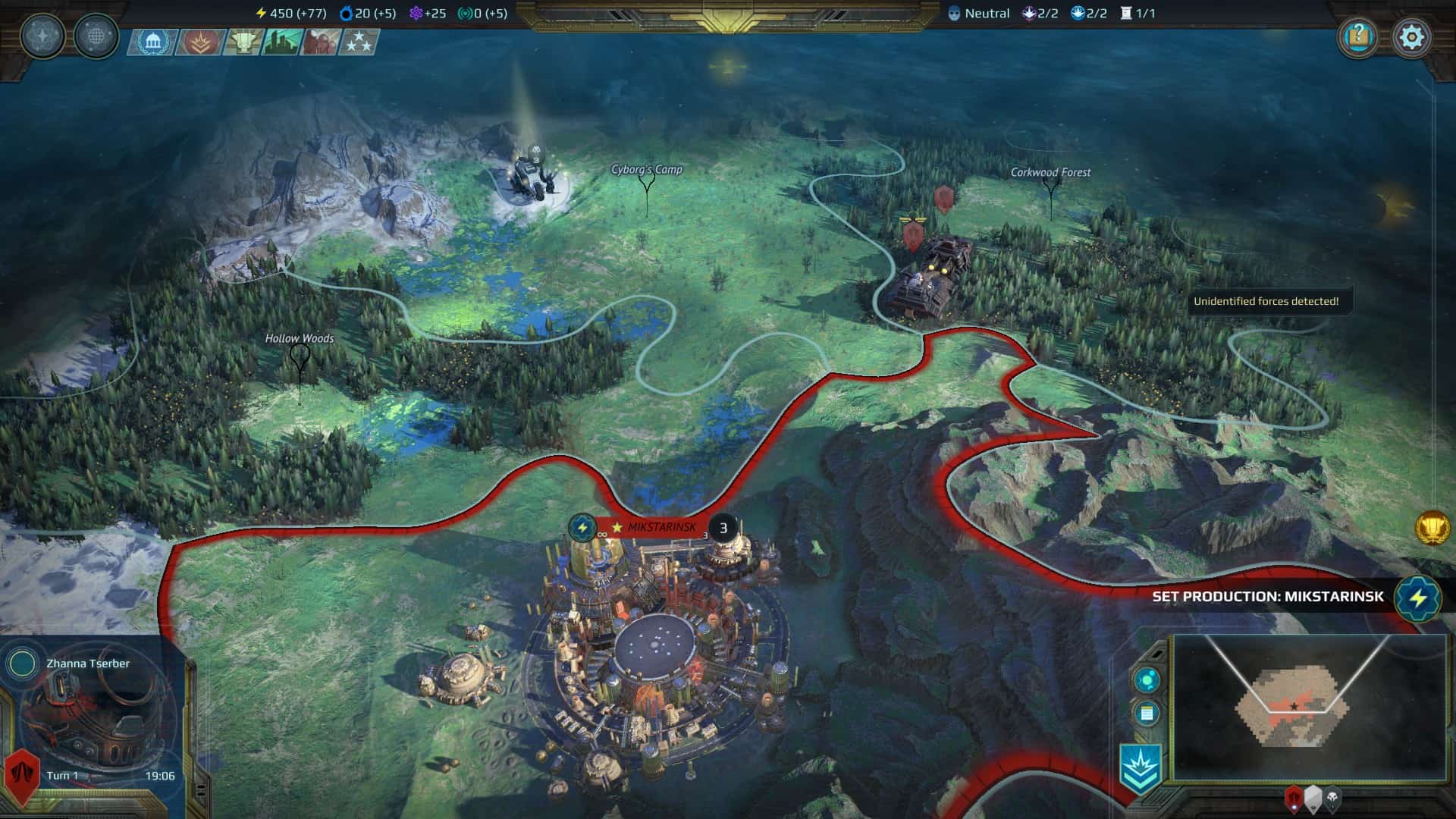 Once you’ve chosen a planet, scenario or campaign, and a commander, you’ll see your commander set course for your chosen planet. When you see the map for the first time, you can physically see your spaceship land, marking the official moment of your ‘planetfall’. Then, your first city will be established, and your commander, along with six other units, can start exploring. In terms of the game’s starting position, Age of Wonders: Planetfall overlaps strongly with its predecessor Age of Wonders 3 and the Civilization series. Initially you’ll mostly be uncovering and exploring the map, fighting marauders (Age of Wonders: Planetfall’s version of barbarians), and meeting other factions along the way.

“…mechanics feel like they are built to inspire players to think big and strategise on a grander, more ambitious scale.”

Marauders were a great way for me to familiarise myself with the combat system; in Age of Wonders: Planetfall battles take place on a different dedicated battlefield. Similar to games like XCOM and, to some extent, Total War, battles are tactical and turn-based; what makes it interesting is that Age of Wonders: Planetfall allows each unit to be moved individually in battle, and, after defeating an enemy, to be upgraded individually with particular mods and weapons. For commanders and ‘heroes’ – legendary characters who spawn randomly to join your faction — this even goes a step further: they gain experience points, allowing you to spend them on specific skills.

I found these combat mechanics and its upgrading system particularly engaging because it allows you to truly tailor different armies: one army can consist of up to six units and, depending on your play style, you can create armies with specialised strengths like healing, or breaking through an enemy’s ranks. While you do have the option to auto-resolve conflicts, I particularly enjoyed these tactical battles because they felt like they sped up the pace of the game, making it a more varied and surprising experience: unlike other 4X strategy games, you can’t just mindlessly dive into battle using brute force. Instead, the game’s mechanics feel like they are built to inspire players to think big and strategise on a grander, more ambitious scale.

Not that there isn’t anything to do off the battlefield: Age of Wonders: Planetfall is as much about empire building and diplomacy than it is about warfare. Like with many strategy games, you start a scenario or campaign with a single city and a handful of resources. Similarly to other strategy games, you’ll find yourself keeping track of research, food, money, diplomacy, and happiness and expanding your knowledge through a research tree. As you expand your cities, you can build different structures, harvest resources as you conquer new sectors on the map, and extend your influence.

But when it came to relationships and diplomacy with opposing players, I found the mechanics thin in places. In several playthroughs, opposing commanders declared war on me within the first ten turns, despite being on neutral terms with me. After a while, I found myself disregarding the diplomacy dynamics to focus more on my military instead. This is just as well, because its combat dynamics is where Age of Wonders: Planetfall truly shines, delivering arresting combat mechanics with a meaningful story to boot.

Age of Wonders: Planetfall is a game with incredible depth and a strong focus on combat. No matter whether you’re a seasoned strategy gamer or a rookie, once you wrap your head around its factions, stories, and units, it is sure to transport you straight to a different galaxy where you’ll be greatly entertained.