When it originally released in 2011, I loved Catherine. A strange blend of visual novel,  puzzler, romance and horror, it combined some very adult and strange themes, making it one of the more memorable titles I can think of in recent video game history. To my pleasant surprise, the mish-mash of concepts actually worked quite well together, creating a challenging experience that often kept you on your toes, guessing about its mysteries and questioning your own morals throughout.

Catherine: Full Body takes the original, adds a whole bunch of new content – including a brand new character who is worked into the plot entirely – and puts it onto PS4 here in 2019. This leaves us with a game that many people likely missed last generation with lots of bells and whistles to make it enticing for newcomers while still palatable for those who played the original, and it mostly succeeds, despite some controversial content.

At its heart, Catherine is a love story of a different kind. You play as Vincent, who is not doing a whole lot with his life, except he does have a girlfriend, Katherine, who is more than ready to settle down. Vincent however is clearly not ready for commitment, and after a night of booze ends up cheating on her with another girl, Catherine. Things take twists and turns from here, as Vincent questions his own morals, trying to navigate these two very different relationships while coming off unscathed.

Oh, and every night he goes into a nightmare zone where men are punished for their infidelity, and if they die in their sleep, they die in real life.

Gameplay throughout Catherine: Full Body is balanced between two distinct styles. First, the real world; cut-scenes show Vincent’s relationships with his friends and lovers, his nightly visits to the local bar where you can wander around striking up conversations with other patrons, all the while receiving text messages on your phone that you can respond to or ignore. The second, the very stressful nightmares, remove that slow pace entirely as you must frantically climb a near-endless tower by pulling out blocks that can be used as platforms to ascend, all while the bottom of the structure is falling out from beneath you.

“…a good mix of tough-but-clever, and reaching the top of a particularly hard level is very satisfying.”

This is where the game gets challenging, as you must use different techniques of pulling and pushing blocks in order to achieve success, and mistakes will always lead to your demise. Different types of blocks get added into the mix, too; some explode, some are made of ice, some have spikes in them and other tricks that impact your climb. The Remix Mode included in Full Body also has different shaped connected blocks (more Tetris-like) that come into play too, making the experience different again. It’s a good mix of tough-but-clever, and reaching the top of a particularly hard level is very satisfying.

Remixing the puzzles in this way made it feel fresh for me (granted, I can’t remember much about what happened last week let alone eight years ago), but there are plenty of other additions into Catherine: Full Body that change the game in meaningful ways. Firstly, you can choose to skip puzzles and just enjoy the story if you’re so inclined, taking away some criticism that the original was far too difficult. There’s a competitive multiplayer mode for those who like to puzzle against an opponent, adding a new layer to the already complicated tower climbing.

What stands out most though, is the entirely new character added to the story, Rin. She’s a mysterious girl who stumbles into Vincent’s life, not knowing who she is or where she came from. On top of suffering with memory-loss and in need of some direction in her life, she’s also incredibly sweet-natured and friendly. Arguably, she’s the ideal girl for Vincent, balancing between the hyper sexualisation of Catherine and the serious buttoned-up personality of Katherine. This turns the already tenuous love triangle into a love square, making things even more tricky.

Even more impressive, Rin is integrated into the existing game pretty seamlessly. It’s as if she was there all along. Actors from the original were all brought back into the studio to record a truckload of additional dialogue, and new interactions and cut-scenes were also made from scratch to ensure that she didn’t just feel like some haphazard DLC. I wish more remasters/remakes would go to the effort and detail that Atlus have here, as they really did go the extra mile to make Full Body feel different while maintaining what made it special in the first place. 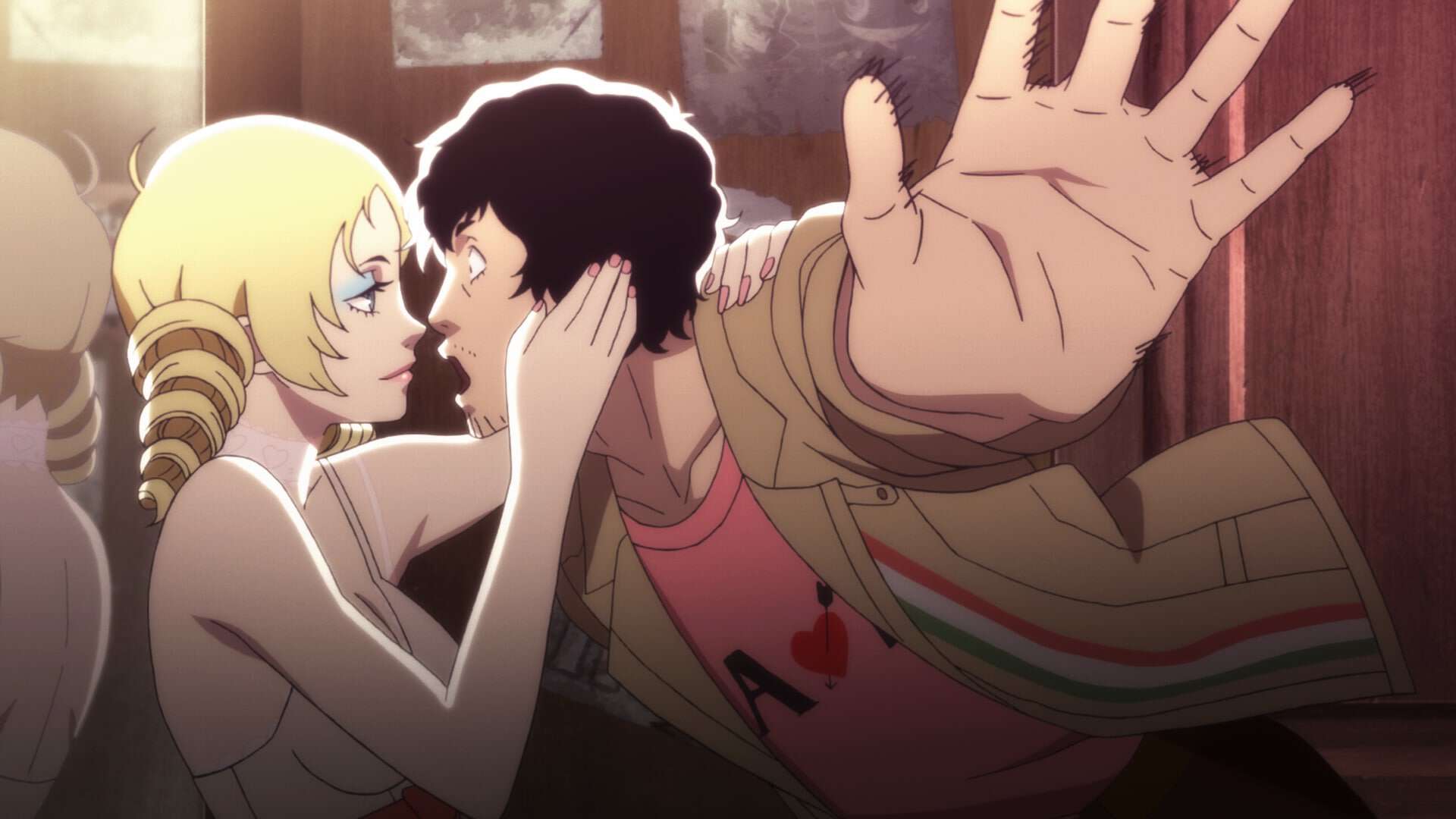 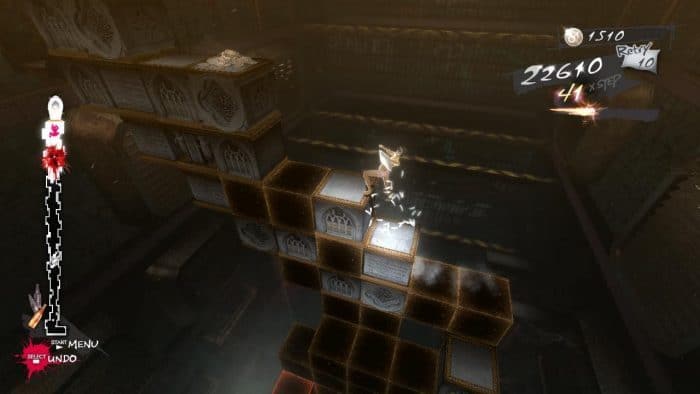 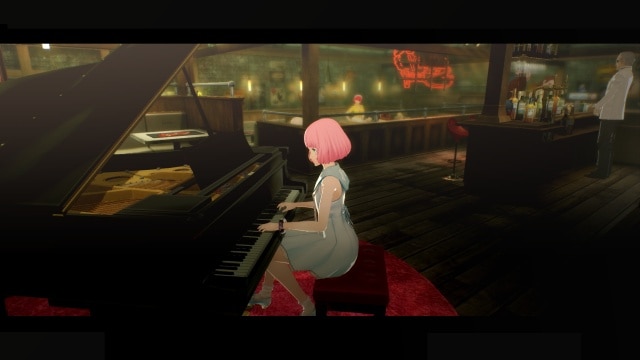 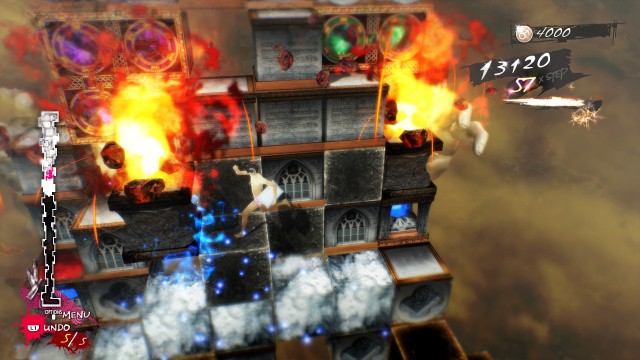 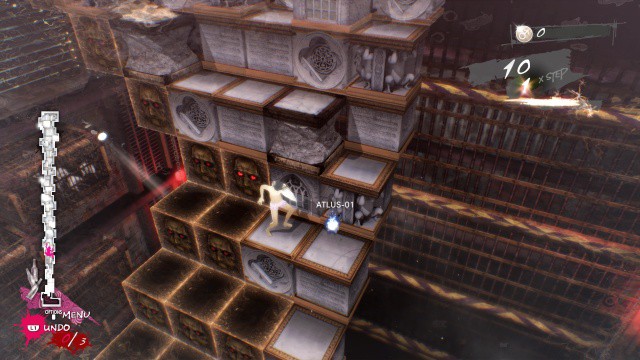 Rin also serves as a helper in the nightmare realm, as she plays piano to slow-down the tower from falling to pieces. The balance between the real world and the nightmares is intriguing, especially seeing the crossover between the two. Characters you meet at the bar pop up in your nightmares, represented as sheep with defined characteristics. As you play, the two worlds begin to overlap in interesting ways that blur the lines between them,  and a literal moral compass pops up constantly to let you know whether the choices you’ve made were pure or dastardly, including some particular direct questions that made me take pause before I answered.

Would I be 100% accepting of ALL of my partners secrets, or are there some that I’d rather not know? Does life begin or end at marriage? Are my sexual thoughts deviant? While there’s no wrong answer to these, of course, it’s these genuine adult themes that Catherine: Full Body plays with, which keeps it grounded in real life even while you’re ascending an evil tower with a bunch of literal sheep while a gigantic baby screaming “DADDY” chases you, trying to kill you. Yes, the game is bonkers.

My issue with the game is one that I had with the original too; it has several endings that occur based on the moral choices you make throughout, but for the narrative to work, Vincent has to keep cheating on Katherine again and again. Even if you do everything in your power to be a good guy, responding lovingly to your girlfriend and ignoring the advances of the other girls, Vincent still inevitably does the wrong thing. This, at times, made me feel like my choices didn’t actually matter that much, even if it ultimately prompts different endings.

There’s also the “elephant in the room” when it comes to Catherine: Full Body, and that is some of the issues around transphobia that have come up since the game originally released. Before I delve into this, please note that I am a cisgender male, and I had a conversation with some of our trans contributors to ensure this represents Checkpoint’s thoughts properly.

(SPOILERS to follow for one of the game’s twelve endings).

Firstly, one of the issues with the original was that Erica (whose character transitioned from being “Eric”) was listed in the credits with their dead-name. This has been adjusted in Full Body, which is good to see. However, an ending of Catherine: Full Body can be considered “suspect”, to say the least.

Without giving too much away, there is a “good ending” where many of the characters have received what would be considered their best  possible outcome , and in that ending, Erica has not transitioned at all, and is still Eric, a male. A particular punch-line is used in the scene as well; while some could argue that context is important and that this is merely one of twelve possible endings (up from Catherine’s original seven), you could also easily point to the developers questionable past when it comes to transphobia and surely raise an eyebrow.

Trans folk are not a punchline, dead-naming (even in an alternate timeline) is not OK, and while the translation team may have had their heart in the right place in trying to tweak the game to be as “friendly” as possible, that doesn’t change the fact that this can be quite triggering stuff and ultimately, I would have been far more comfortable if they’d removed the ending – or just left Erica alone.

(For more on this issue, I recommend this article from Daily Dot, which goes into a lot more detail on why this is problematic.)

Catherine: Full Body remains one of the most unique and entertaining experiences you can have in a video game,  with a fairly addictive gameplay loop that keeps your brain switched on during some tense puzzle sections. If you can look past some questionable decisions with one of the games core endings, I’d call it a solid remake and a perfect example of how to bring a previous game to a new generation of players while still managing to add more than enough new content to bring old players back for more. After all, three Catherine’s must be better than two… right?