Borderlands 3 Review – Welcome back to Pandora

The original “Loot Shooter” returns with Borderlands 3 blasting its uniquely bombastic take on the RPG/FPS genre. It’s been 7 years since the release of Borderlands 2 and 10 years since the original, and within that time we’ve seen the genre journey into bigger and more expansive directions. However bigger isn’t always better, and Borderlands 3 stays true to its core identity, for better or for worse.

Borderlands 3 understands its identity and isn’t afraid to embrace the quirkiness, the stupidity, and the largeness to life that it’s known for. And no matter how many valid criticisms the series has received, it’s hard to ignore the impact that these games have had on the gaming landscape.

Borderlands 3 opens in a familiar way. You’re a vault hunter looking for riches and fame, caught on the desolated and hostile world of Pandora where you’re quickly antagonised by the game’s villain. A semi-open world awaits for you and up to 3 buddies to explore, shoot, level up, and deck yourself out with all of the colourful loot you can get your hands on. The narrative, NPCs, enemies, and setting are all instantly recognisable. In this way, the game clings to its past in a way that is both warmly nostalgic but also a tad uninspired. It meant that the opening hours were underwhelming, although things do eventually open up and advance in some interesting ways.

Borderlands 3 is definitely a game for the fans. That’s not to say newcomers won’t find anything to like, but returning players will feel immediately at home, fighting alongside the franchise’s most loved characters. Borderlands 3 embraces its past, utilising features from not just the original 2 games, but from The Pre-Sequel and Tales from the Borderlands as well.

Any changes to the gameplay are minor, with Borderlands 3 being a step forward for the franchise rather than any kind of giant leap. If you’re looking to play more Borderlands, then this game is definitely that. If you’re expecting something deeper or more advanced, you’re likely going to be disappointed.

Quality of life improvements are noticeable and appreciated in Borderlands 3, but I don’t know if it’s enough to be impressive, considering the rather long wait between games. Alternative fire modes for your guns is nice but it became a bit of an unused gimmick for me. Sprinting and sliding was enjoyable and tactically satisfying, but this is hardly a revolutionary addition. I suppose when you have a formula that works you shouldn’t fiddle around too much, and in Borderland’s defence I’ve always found the gameplay to be enjoyable.

New character classes are of course present for Borderlands 3 and I have to admit, I’m rather impressed. The majority of my time was spent with FL4K and his faithful animal companions. After progressing through the skill tree it became pretty apparent FL4K’s abilities are well thought out to create a cohesive and fun gameplay experience. Weapons were diverse and interesting too, with so many different combinations of wacky, powerful, and satisfying firepower. 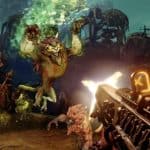 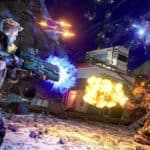 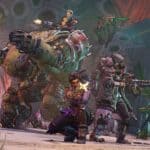 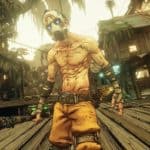 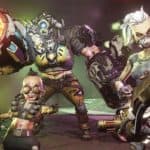 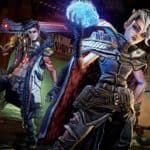 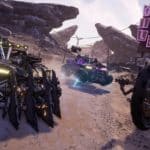 Narratively the game felt on par with what has come before it. Borderlands 3 is not going to win an award for its gripping or deep narrative, although the story does unfold in a way that is easy to follow and engaging enough. Characters didn’t feel as well written here as they have in the past, with some new additions trying a bit too desperately to be zany, and some old favourites not quite living up to their past standards.

The game’s narrative does feel a bit more grandiose however, with a focus on interplanetary travel and corporate war. It was surprising and admirable to see the influence Tales from the Borderlands clearly had on this latest release.

As the game progresses you begin to see more and more of the universe you’re apart of and it’s a universe worth seeing. The locations of the game got more interesting the further you progressed and there’s a really good amount of content here for you to sink your teeth into. Some of it felt a bit like content padding; I certainly wasn’t a fan of the Echo Logs scattered around the map for instance, especially when they interrupted more important moments of dialogue. However for the majority of playtime I felt like I was experiencing unique and engaging content.

“I can forgive the game for a lot of its shortcomings, although there’s something about Borderlands 3 that I absolutely cannot forgive – its technical problems.”

I can forgive the game for a lot of its shortcomings, although there’s something about Borderlands 3 that I absolutely cannot forgive – its technical problems.

It’s no secret that Borderlands 3 suffers from some unfortunate performance issues. Throughout my time with the game, the lag I experienced ranged from mildly annoying to straight up unacceptable depending on the circumstances. I played the game on PC, so my experience will no doubt differ to others. However my system certainly exceeds the game’s minimum spec requirements, yet the game’s performance fluctuated drastically.

It was playing the game cooperatively where the performance issues most prominently reared their ugly head. In solo the unstable framerate was most frustrating when aiming down your gun sites. So much so that it impacted the type of weaponry I begun utilising. However in multiplayer the lag seemed far more unpredictable and problematic. Borderlands is a game series known for its cooperative play, so to have my squad hit by pockets of lag and game crashes is just so damaging.

When Borderlands 3 runs smoothly, it’s a more than adequate experience. It’s a successful, if not a bit expected, iteration on what has proven to be a very satisfying formula. Unfortunately the game doesn’t always run smoothly, and it’s a problem I find difficult to look past. Potentially in the future after some performance boosting patches, Borderlands 3 will turn into a pretty decent experience that features great gameplay, impactful character classes and a good, lengthy campaign. Until that point, I can only tentatively recommend Borderlands 3 for those willing to look past these potential issues.