Daemon X Machina is the newest action-packed mech game to land on the Nintendo Switch. The game desperately wants to be a spiritual successor to FromSoftware’s Armoured Core series. And with Kenichiro Tsukuda, producer of the first few entries in the Armoured Core franchise, at the helm, it’s a feat the game almost achieves. But under the hood it feels like something is missing. That behind the pretty visuals and bombastic soundtrack is nothing but a heartless, nostalgia fuelled machine. That’s not to say the game isn’t fun. But it’s certainly not in top form. See, Daemon X Machina isn’t at its best when it’s trying to be Armoured Core. It’s at its best when it’s imitating a different franchise; Monster Hunter.

Daemon X Machina’s single player gameplay, while containing complex controls, is relatively simple. You accept a mission from one of the various corporate factions, go to the location, kill all the little enemy robots, possibly fight another mercenary, then go home and collect your paycheck. And apart from the occasional mercenary encounters, it gets repetitive fast. More often than not, I wasn’t paying attention to the action on screen. I could fly around, press fire, and not have to worry about actually playing the game.

The place where the game makes you actually sit up and pay attention is its big, bombastic boss battles. There are round seven in total, and they each behave drastically different from the others. Instead of just unleashing wave after wave of bullets, you need to chip away at certain pieces of their armour, which uncover weak points for you to exploit. Fighting these bosses earns you research data, and eventually a blueprint, that will allow you to craft powerful equipment to use in game. These Monster Hunter type fights bring a welcome change to the otherwise monotonous gameplay, and provide a genuine sense of fun and enjoyment.

The game knows this too, and it’s possibly why all the multiplayer maps are nothing but different, and often stronger, versions of those boss battles. Taking on these gargantuan monstrosities with other humans is a completely different experience to single player. Watching your team of random strangers work together to bring down a boss like a well-oiled machine is certainly a sight to behold. Online connectivity is spotty at times but holds up where it counts. I would often notice player avatars lagging all over the place in the hanger, this games equivalent of a lobby, only for their mech to face no such issue during combat. This was reassuring as the Switch’s online functions can be challenging at the best of times.

Controls are still as responsive as they were in the February demo. You still feel the weight of you mech when piloting. This makes the decision of what parts to use on your mech one of the most important. Do you prioritise armour, and sacrifice speed, allowing you to tank hits that may down a lesser mech? Or do you prioritise speed, allowing you to keep up with some of the more slippery mercenaries. The control scheme still feels crowded, and still takes some time to get used to. While the tutorial levels do a better job of explaining the basic controls, I still found myself unwittingly inputting actions I didn’t mean to do.

Often these actions were ones I had unlocked through the pilot skill tree. Like the blink ability, that allows you to teleport a small distance out of danger. There’s nothing more annoying than accidentally teleporting when you finally have a boss’ weak point, or when an enemy mech in your cross-hairs. The biggest control problem was at times the camera. It can be sluggish and stilted during combat, especially during times that you need it to be fast and responsive. Towards the end game, it became a challenge to keep the camera focused on enemies. The in-game manual is still present, but this time it is far more accessible, being present right in the start menu. This made finding out how to use some of those late game abilities, like repair and explode, much easier to figure out, as when you unlock them, the game doesn’t exactly tell you how to use them.

The customisation options in Daemon X Machina are extensive. From your Mech, to your weapon load-out, to your skills, almost everything is customisable. Character customisation past the initial creation now costs money, but the option to change everything from gender to voice is still available. Decided you character would look better as the other gender? You can change it. Think they would look better with a bright red mohawk? Easily done. Want to change your plug suit to a different shade of purple and green? Simple.

The skill tree isn’t as customise friendly, but if you plan it right, you can end up with some pretty silly combinations of skills. Want you character to practically be one with their machine? There’s a skill path for that. What them to be a badass who’s machine is only holding them back? Then there’s skills geared towards that too. Just be warned the physical appearance of some of these upgrades can cause your character to look mighty silly. So it’s best to decide if you want to prioritise power or aesthetics when it comes to your avatar.

Swapping mech parts in and out is another major part of the game’s customisation. It becomes a precarious balancing game. You constantly need to make sure you pick the right parts, and the right weapons alongside the right processor for the job.  Obtaining these parts and weapons is an interesting and sometimes frustrating process. There are two ways to go about it. The first involves stripping downed enemies for parts. This not only allows you to add these parts to your inventory but allows you to make quick swap outs during combat if a part gets destroyed.

The second involves taking salvaged parts to the Foundry, a new option in the game’s central hub, and using them to develop new tech. This tech then gets unlocked in the game’s store for you to purchase again at a later point if you need to. This can sometimes lead to frustrating grinding sessions, having you play over missions repeatedly trying to find that one specific part or blueprint you need.

“With a game so focused on customisation, it’s surprising what can’t be customised.”

With a game so focused on customisation, it’s surprising what can’t be customised. Firstly, once you pick a character name, you’re stuck with it. There’s no option to change, despite you being able to to change the name of your mech anytime you want. Another disappointing aspect is that despite being able to customise the paint job of your arsenal, you’re not able to paint your weapons to match. This often left me frustrated as I’d be left with an amazing customised mech carrying around an ugly gun-metal grey rifle, with an atrocious looking green missile launcher on its shoulder.

The game is visually stunning. The stark contrasts and bright colours of the game, coupled with its cell shaded aesthetic, make the environments and models pop, especially in TV mode. That fact that the Unreal Engine can deliver this level of quality on the Switch, an amazing yet under-powered piece of hardware when compared to other consoles, is outstanding. Handheld mode is still as fantastic as it was in the demo, with the only difference being noticeable in screenshots. With everything that can happen onscreen at once, it honestly surprises me that there’s little to no lag. 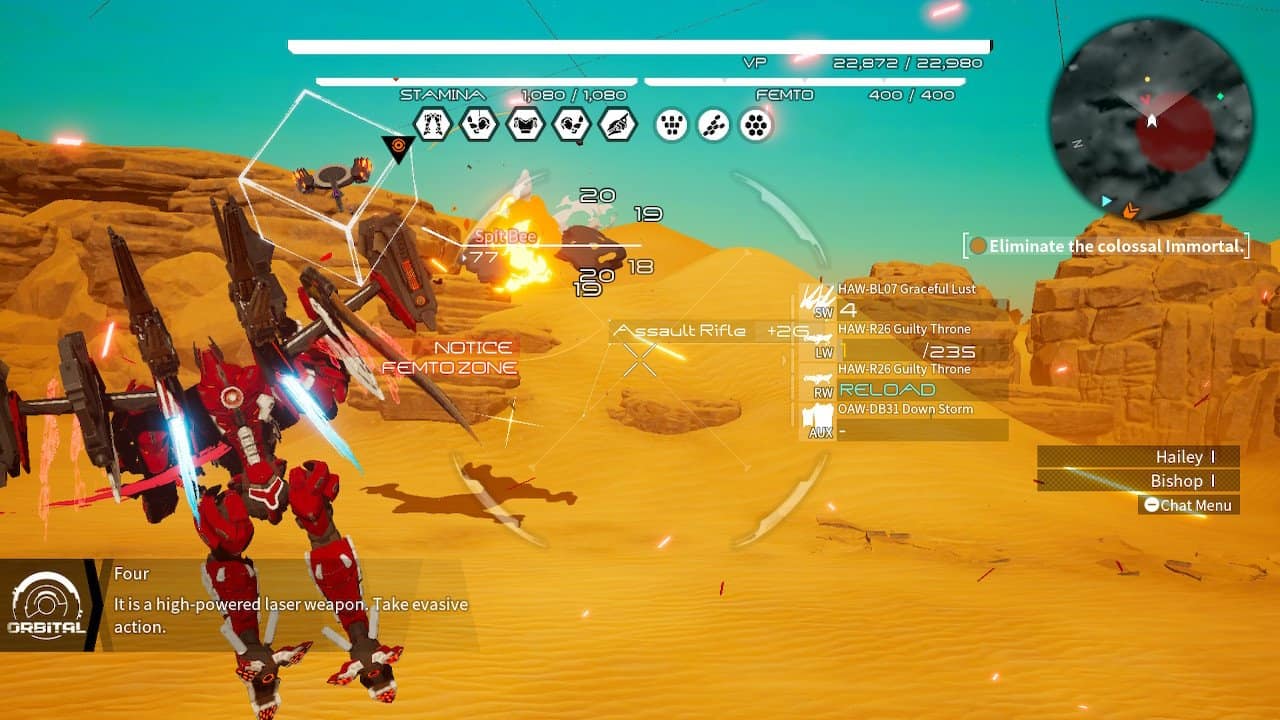 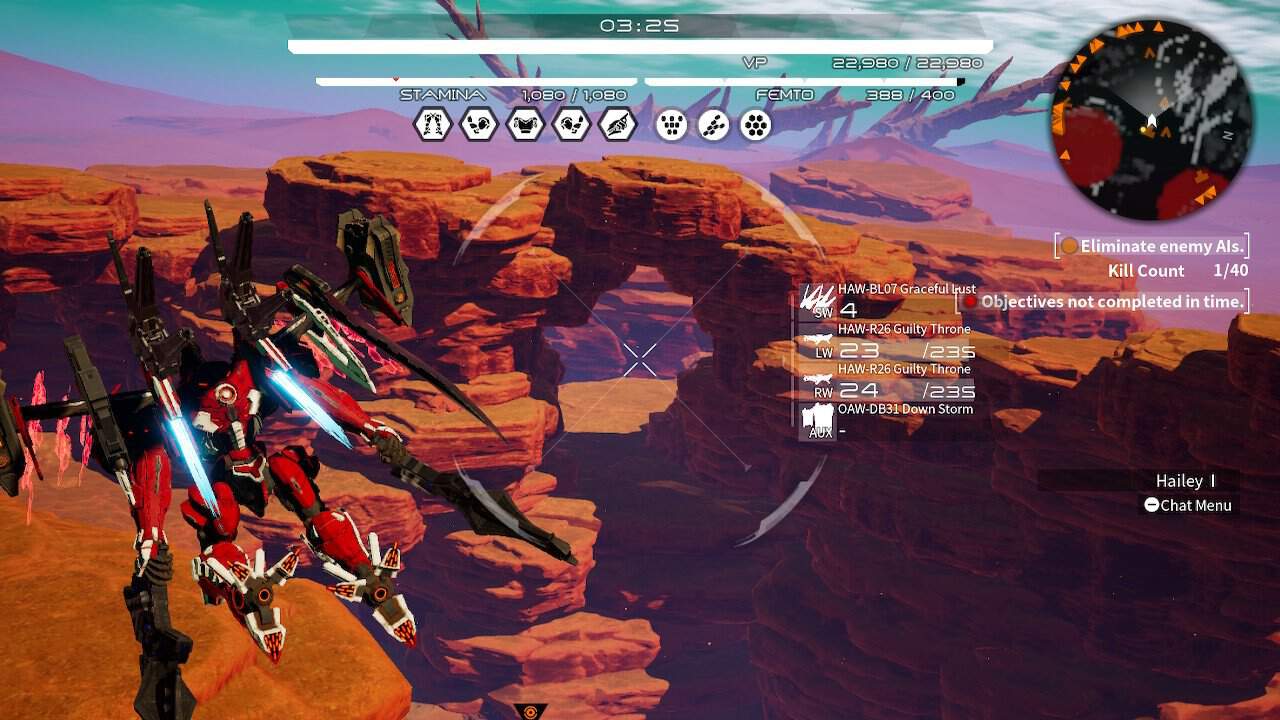 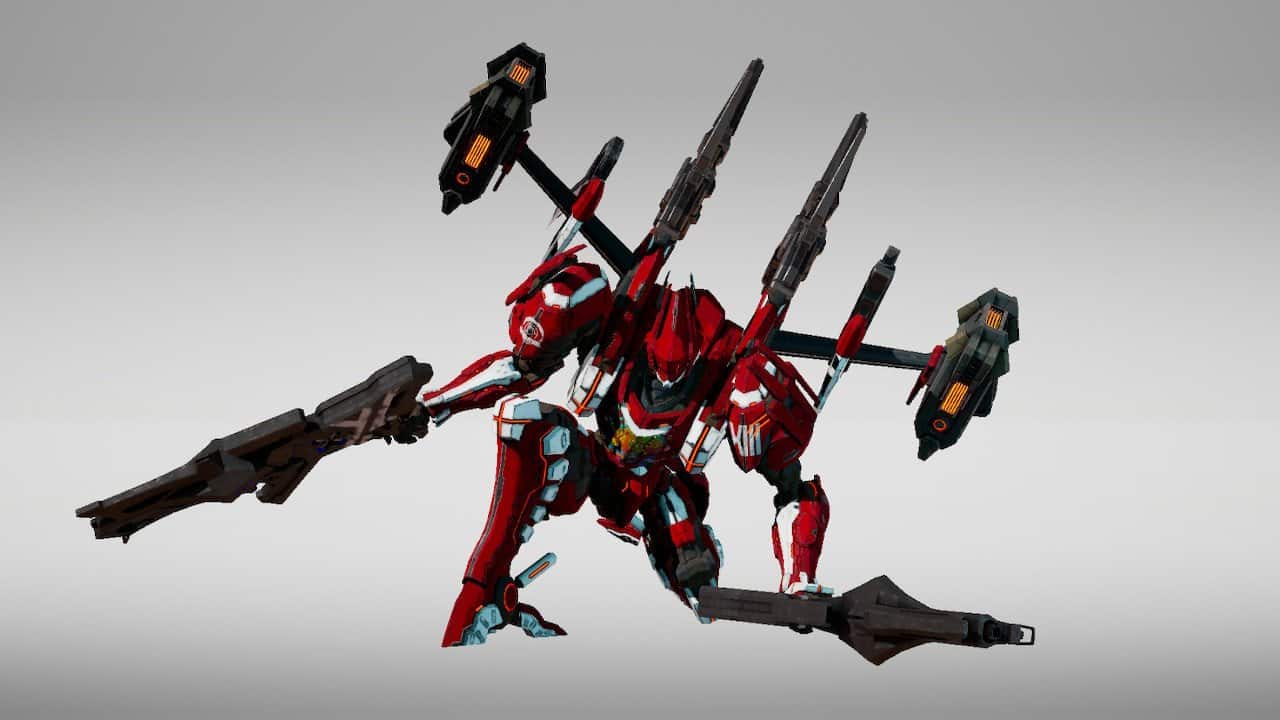 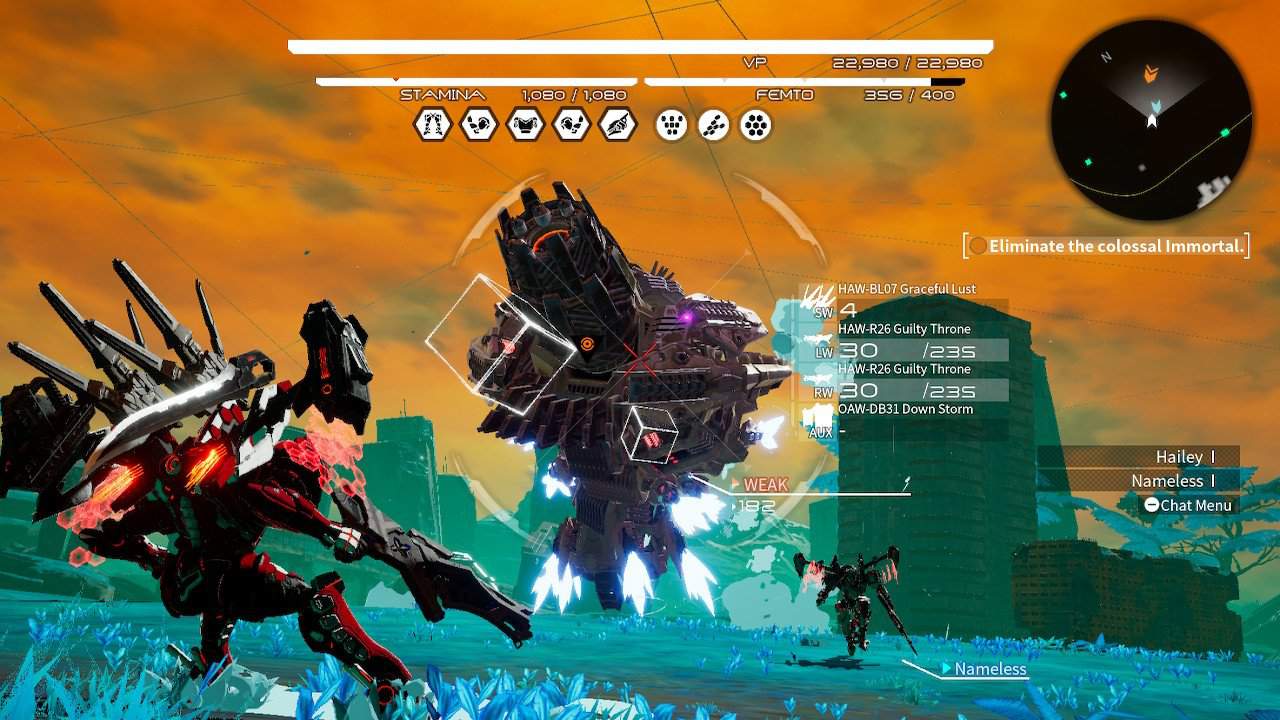 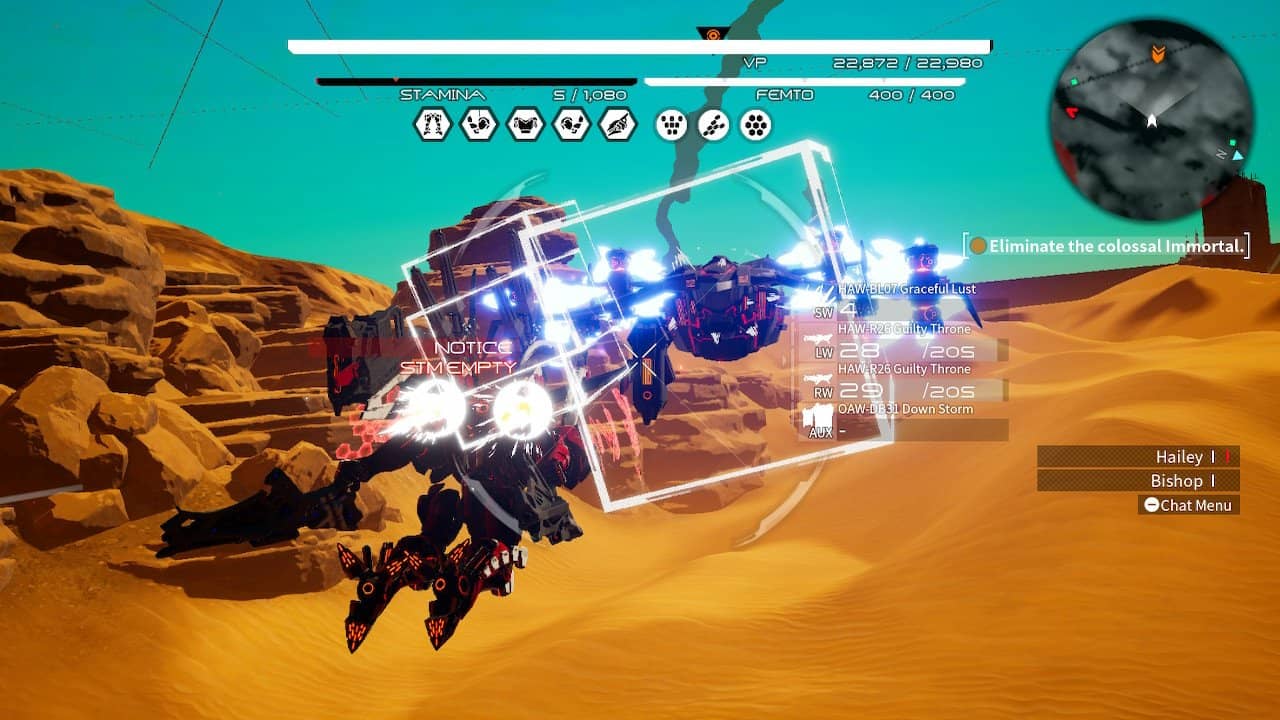 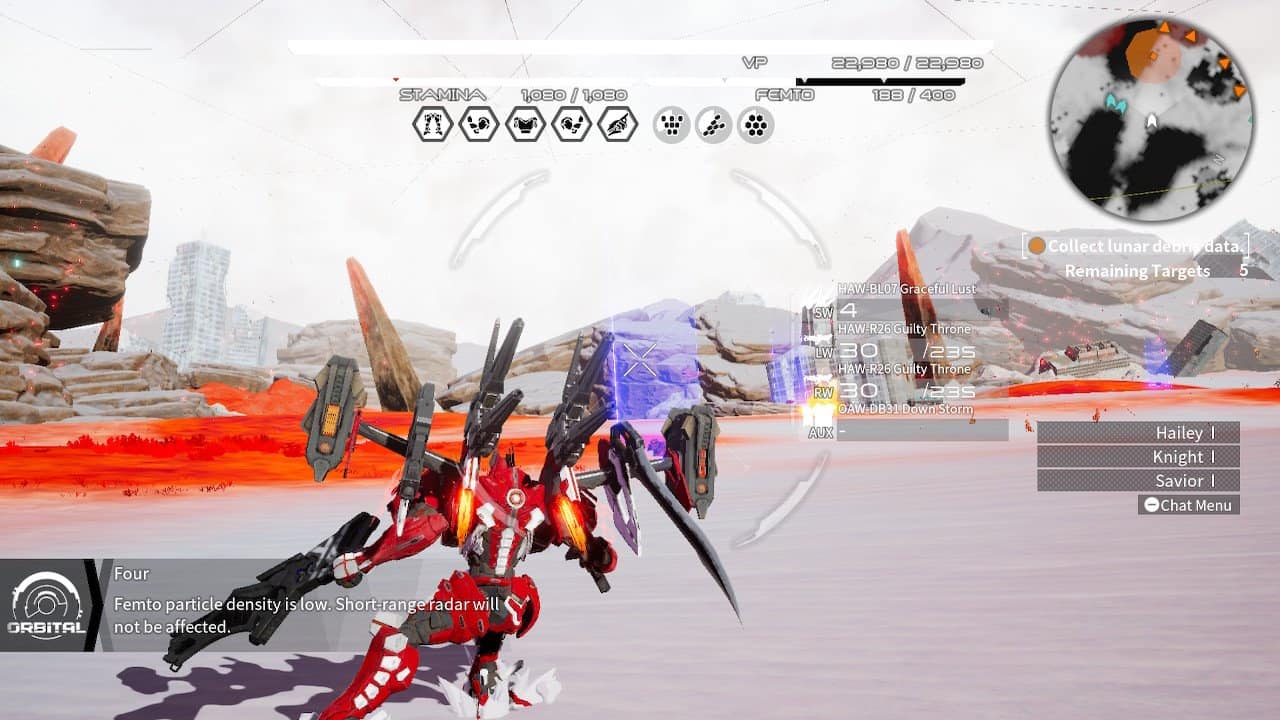 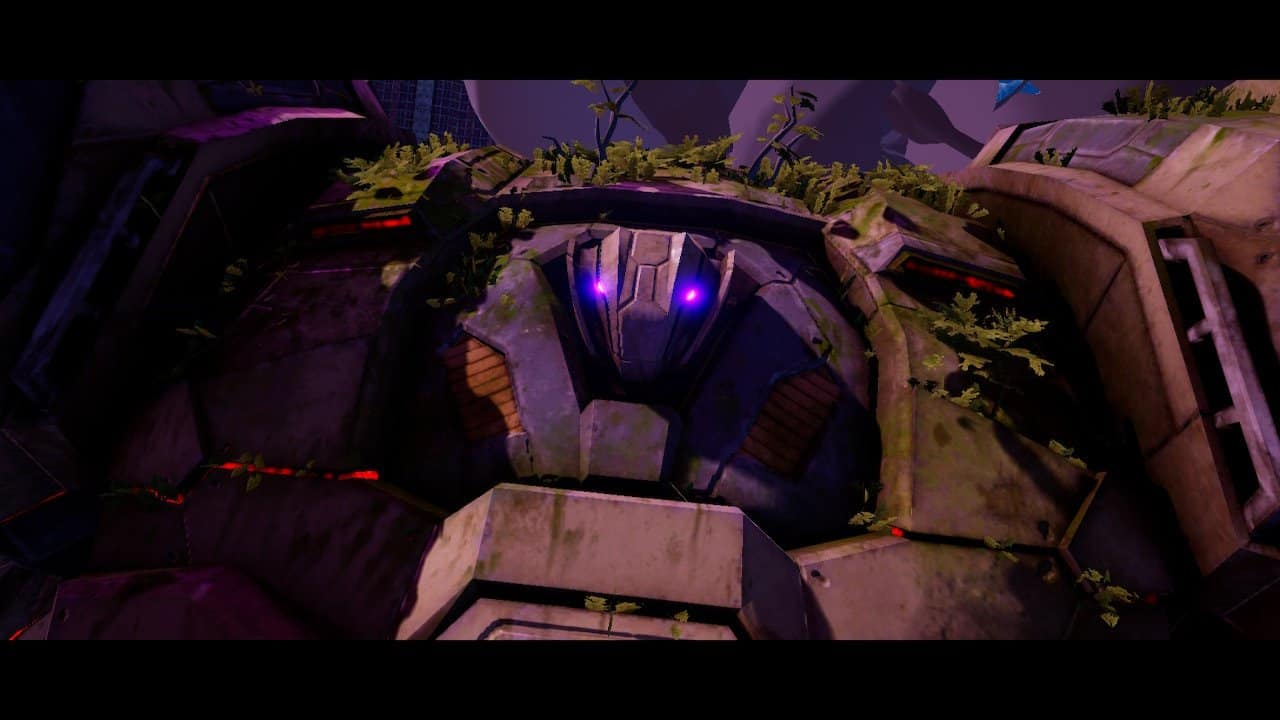 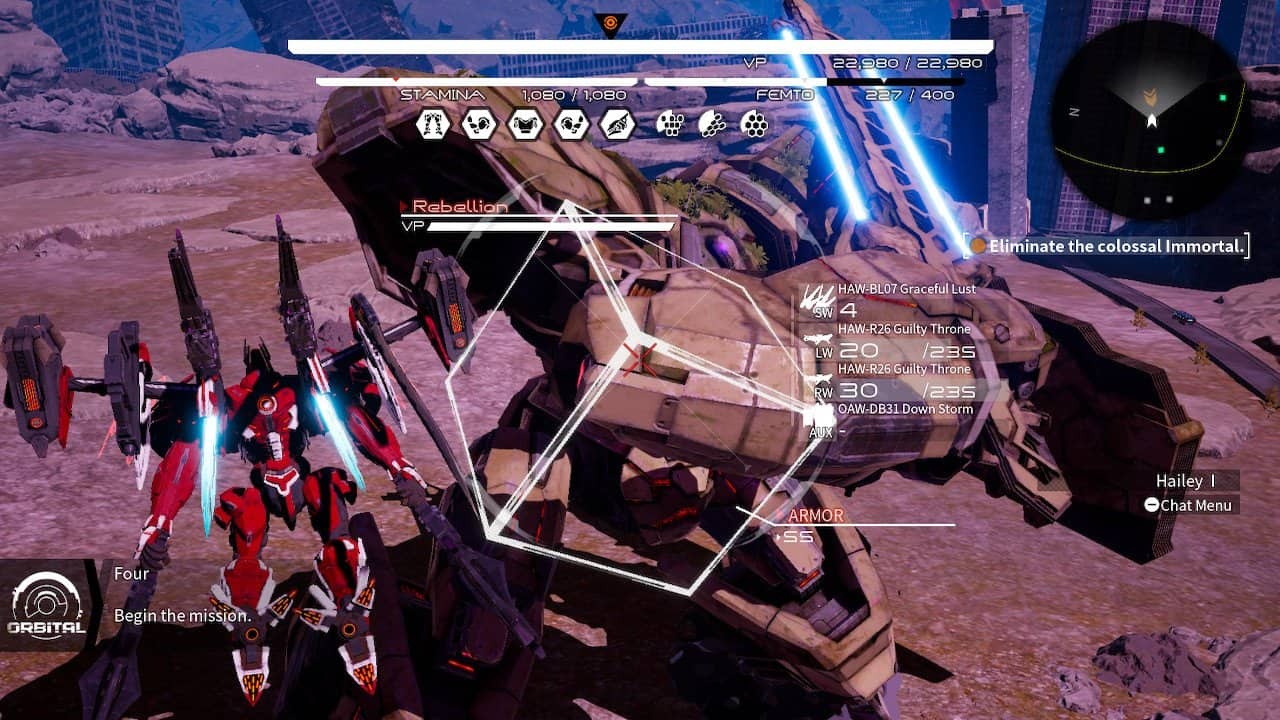 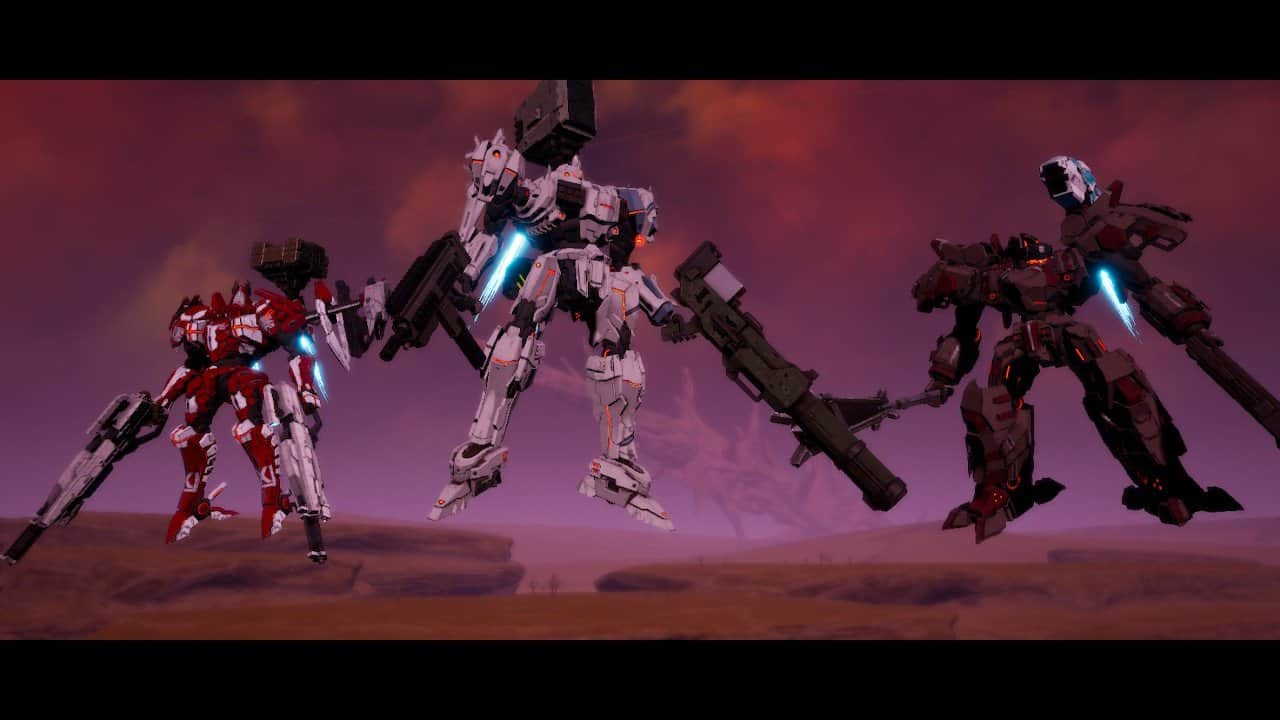 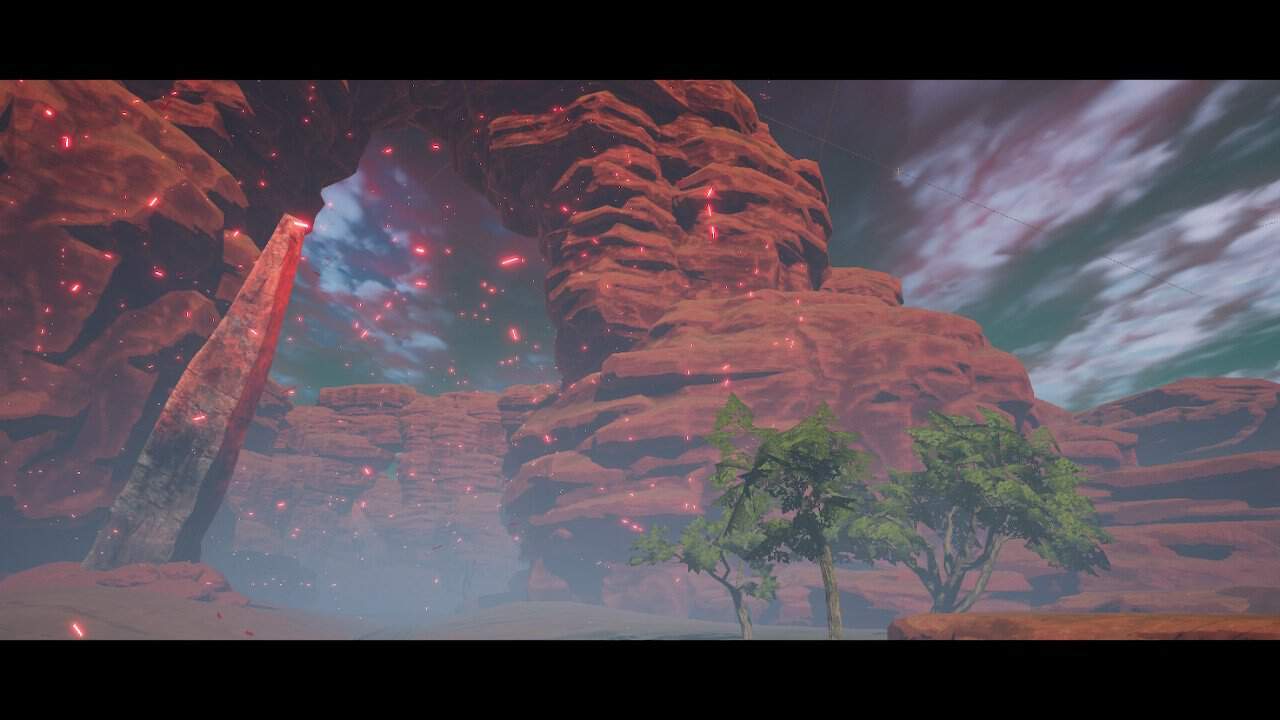 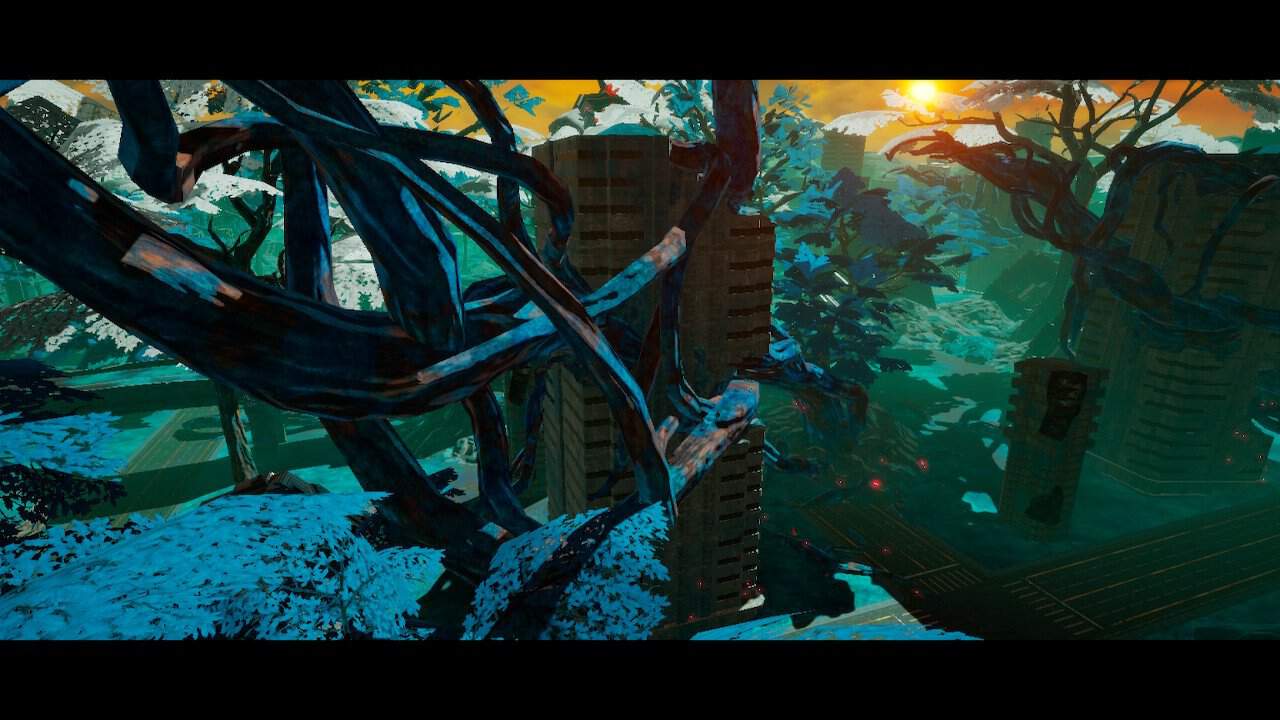 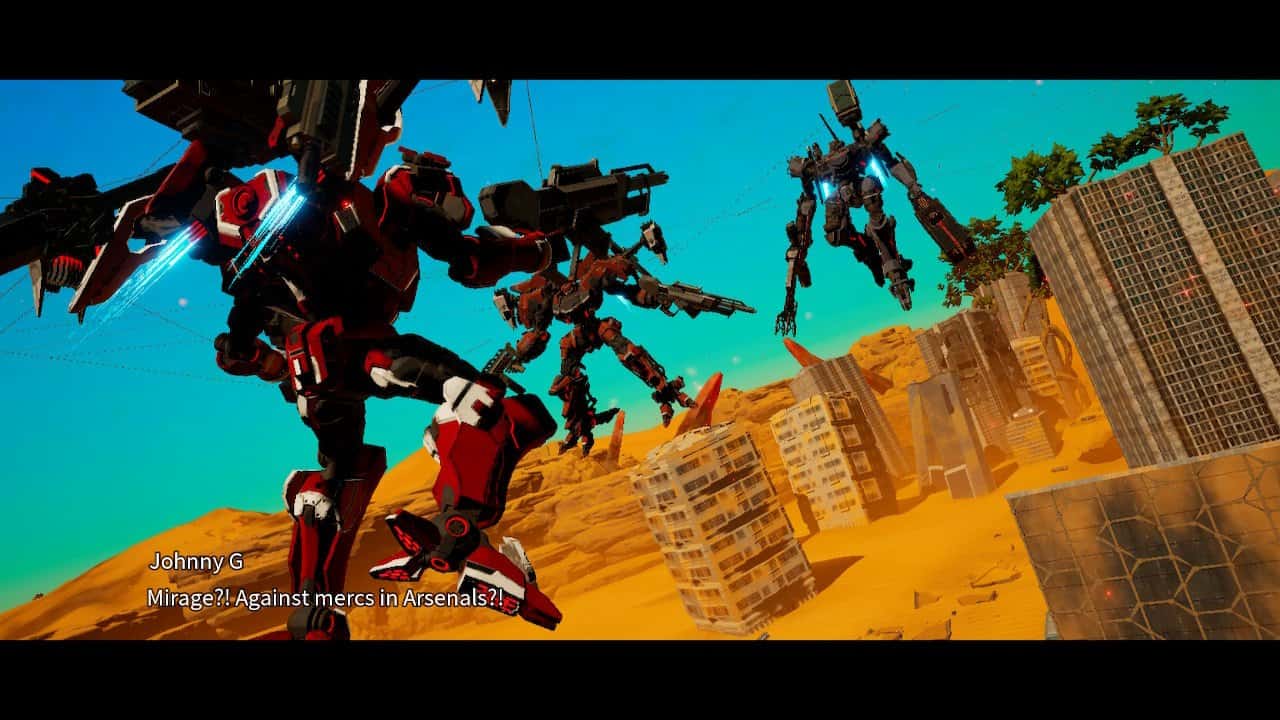 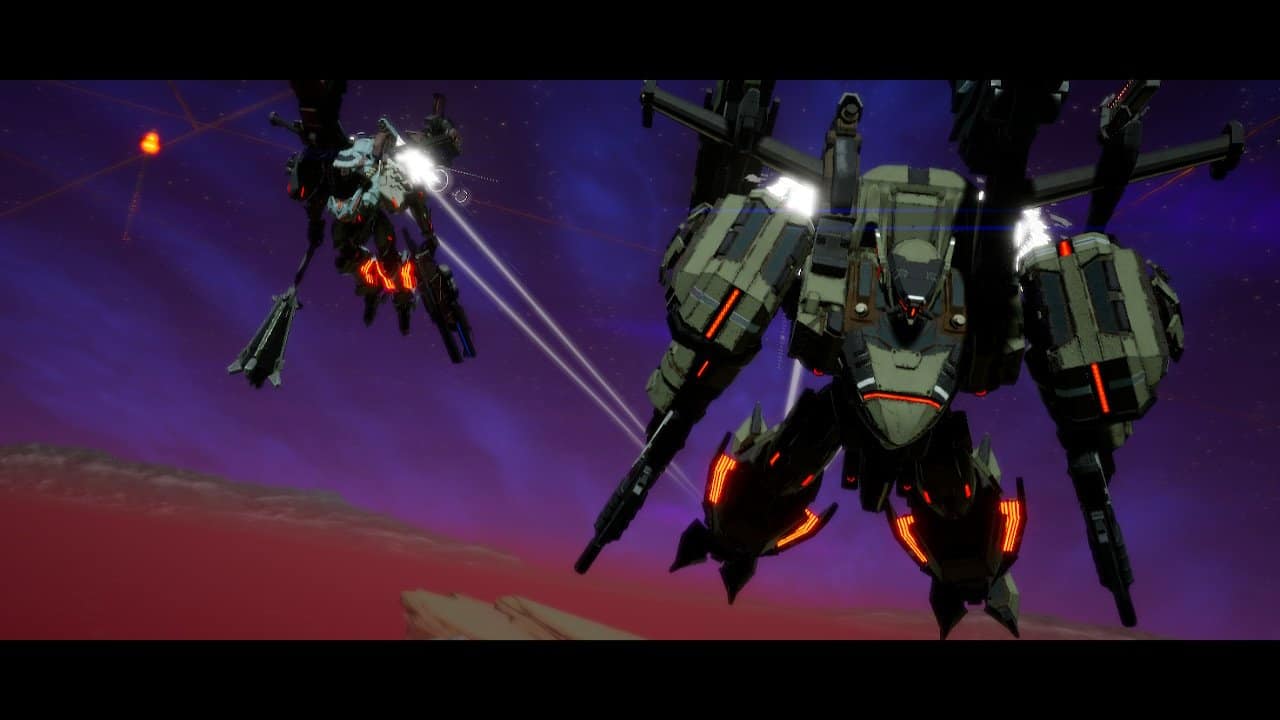 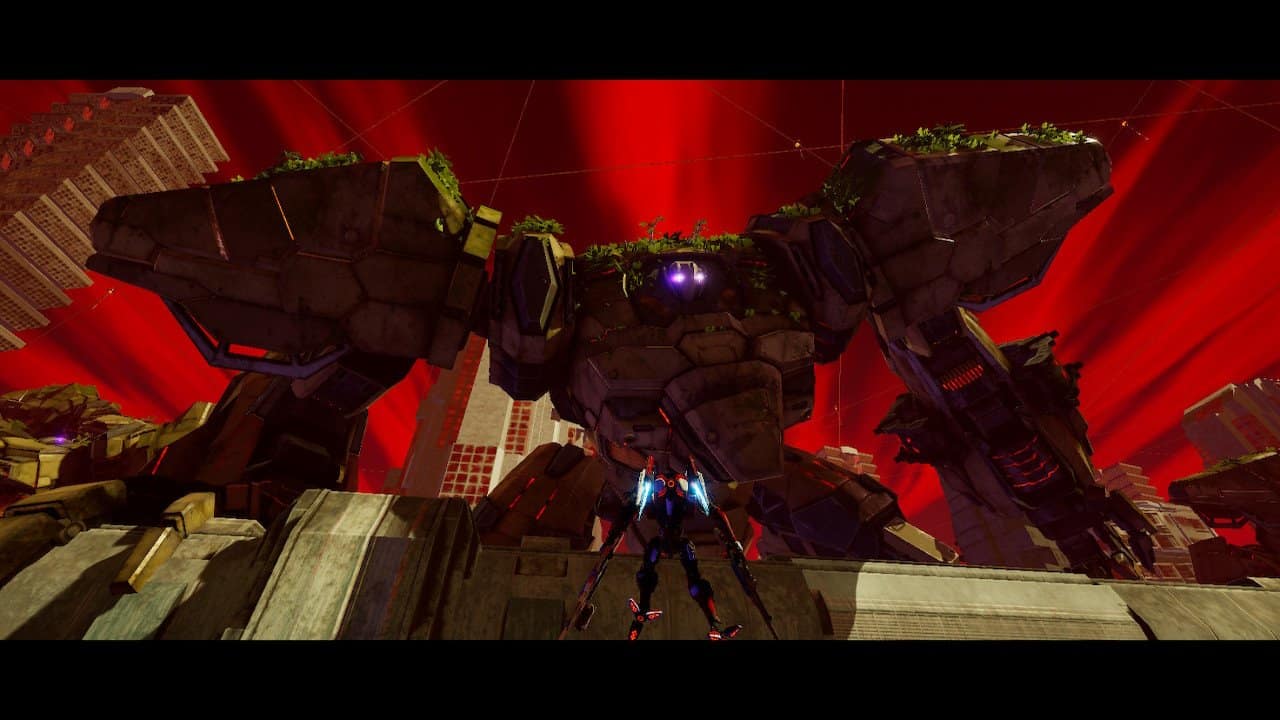 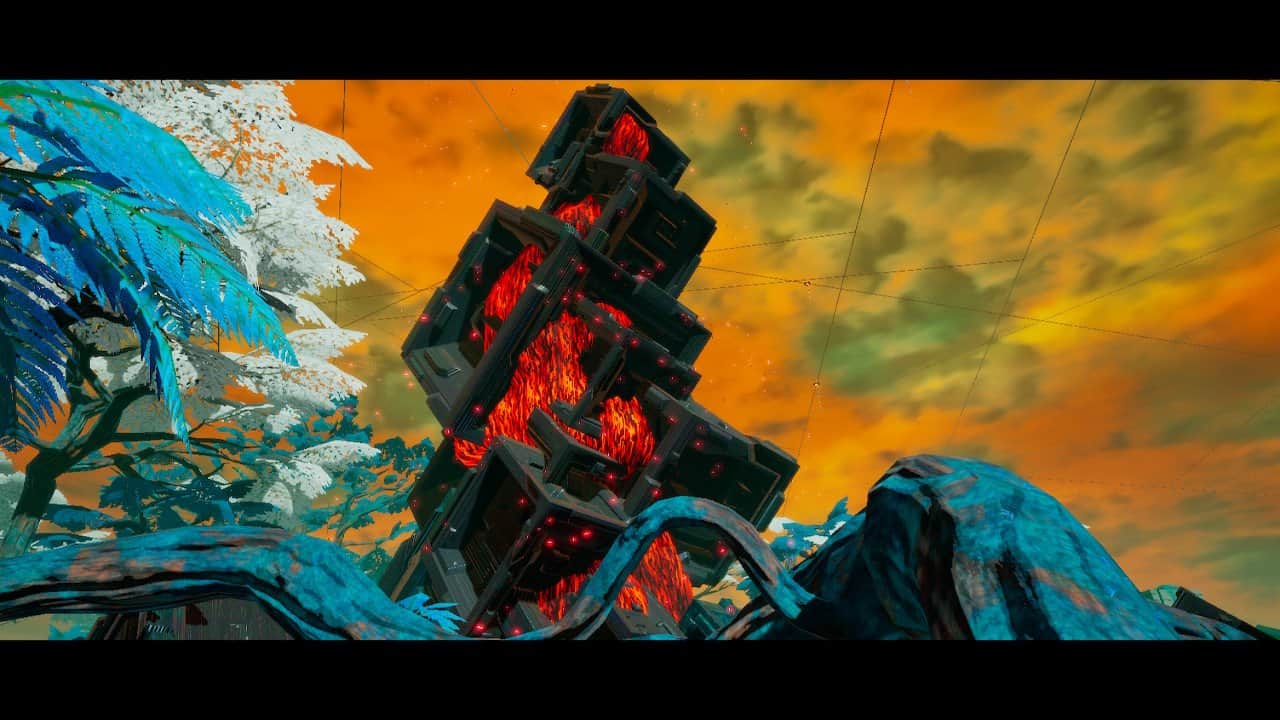 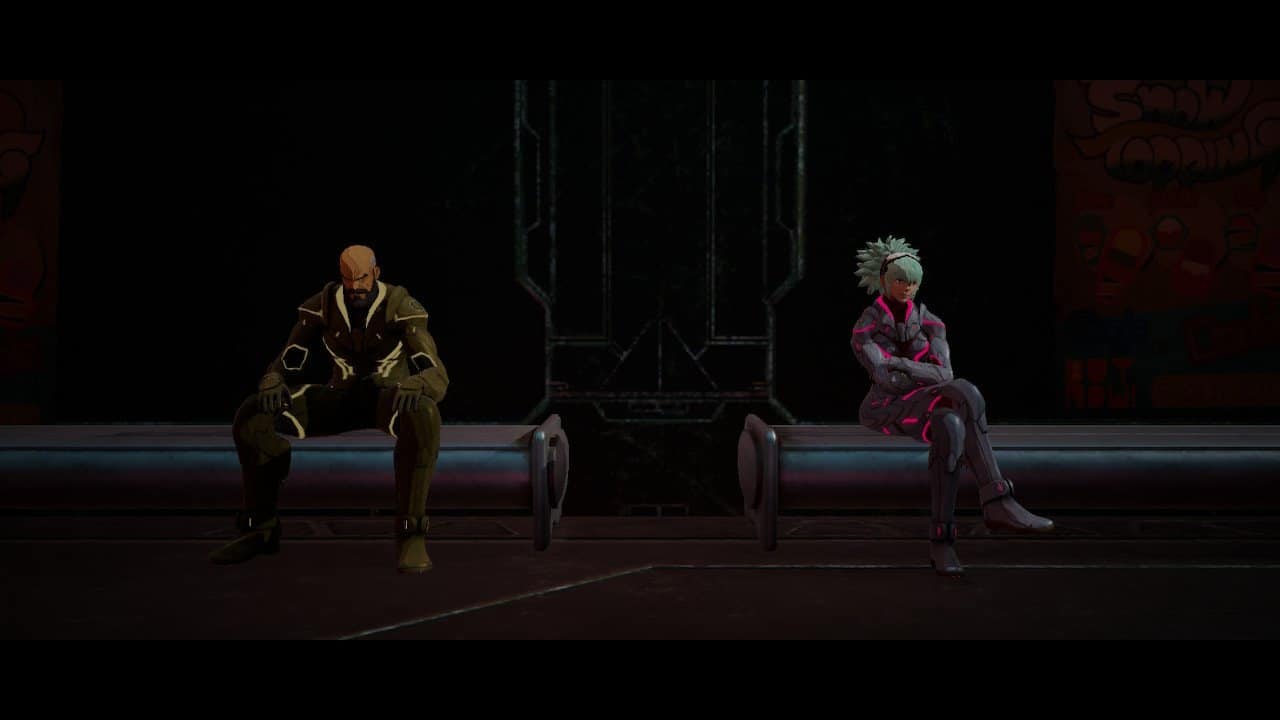 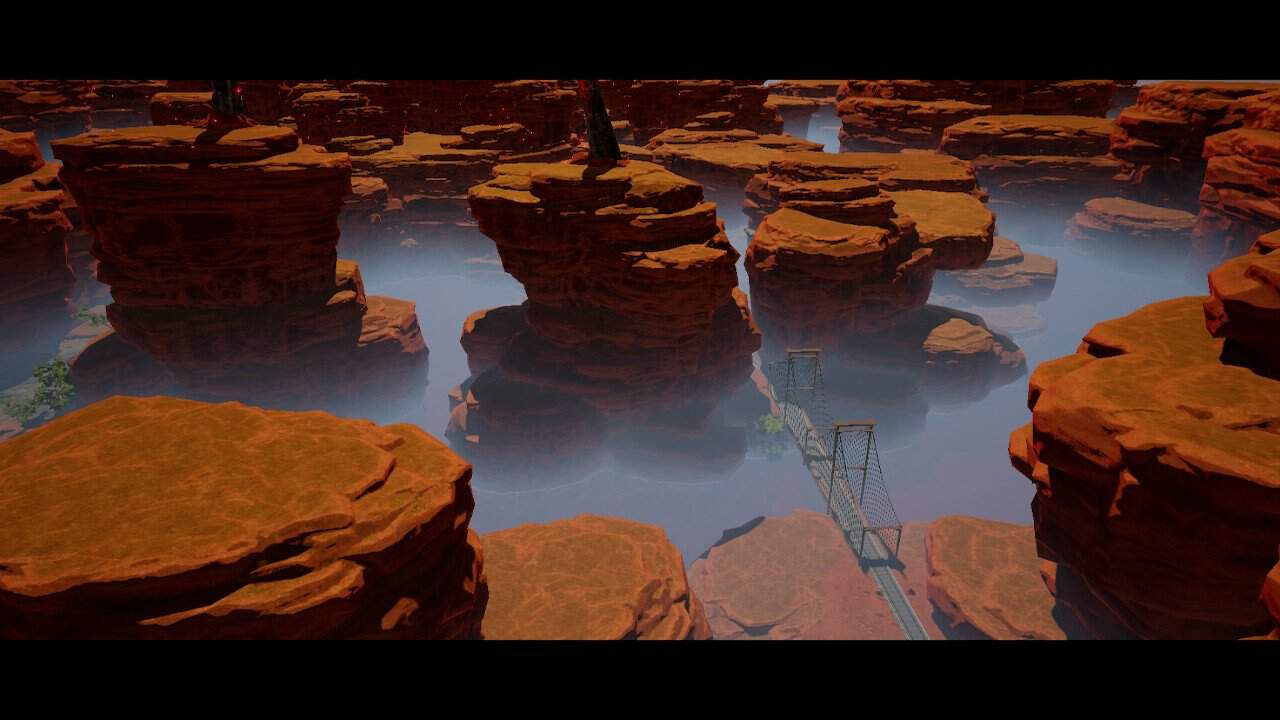 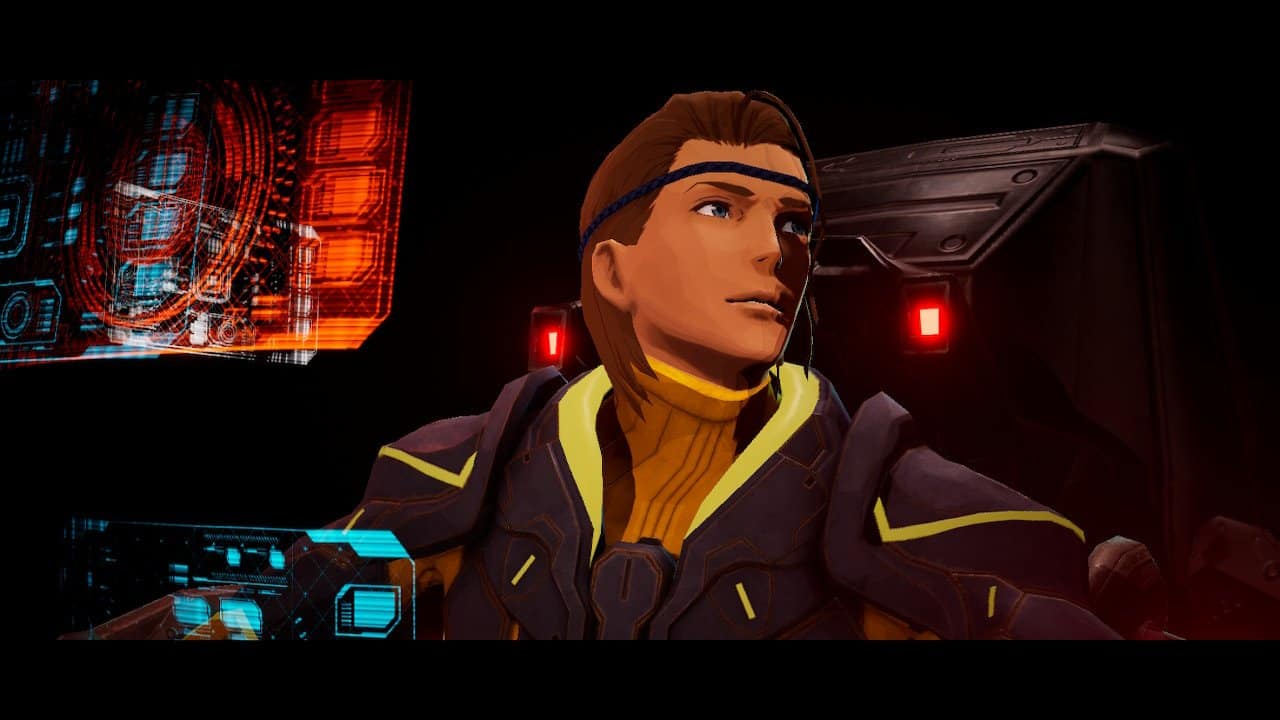 Despite a lot of these positive points, there is one major negative – the story. It feels like an unfocused mess. There are plot points that go nowhere, story beats that make little sense, and times that require extreme moments of mental gymnastics to follow. Right out of the gate, the game throws so many new phrases and terminology at the player that it’s hard to keep up. There’s also very little setup for the game’s setting. Nothing is explained past a brief opening cutscene, and it’s left to the player to figure out exactly what this world is and how it functions. There’s no in-game wiki helping you navigate this world,  so you often feel lost as characters blurt out nonsense words that hold little to no meaning.

There are also too many characters. You come into contact with 20+ fellow arsenal pilots, and while each seems to have a defined personality trait, they rarely go deeper than those shallow traits. This makes it hard to connect with them, or care when major events occur. The voice actors do an amazing job bringing these characters to life, it’s just a shame it seems to have been wasted on poor writing. Cutscenes seem to go on forever, often over-staying their welcome. This, more so than the sometimes repetitive gameplay, makes the game drag at moments. And that’s not something you want when your campaign only goes for 15 hours.

To add insult to injury, you also can’t replay story missions. So if you wanted to rewatch or replay a story segment to try and figure out what the heck is going on, then you’re plum out of luck. Luckily there are “free” missions, quests not tied to the story, that you can replay as often as you like. The previously mentioned boss battles are included in here, allowing you to grind them after you face them in the story.

Overall, Daemon X Machina is a fun if flawed experience. Underneath the layers of dull writing and sometimes repetitive gameplay is an enjoyable and fun time to be had. Bosses are interesting, the customisation is great, and online is actually enjoyable. If you’re a fan of games like Armoured Core, Strike Suit Zero, and Zone of the Enders, or enjoy the Gundam series, then this will likely be a game you’ll want to check out.