Oninaki Review – Maybe in the next life…

Oninaki has a pretty intriguing premise: the people of Szaka believe in the Cycle of Reincarnation, in which the dead move on to ‘the Beyond’ where they are reincarnated into their next life. However, souls who still have regrets about life may remain trapped in the Beyond, turning into monsters that must be destroyed. For this reason, the living are discouraged from mourning the dead, lest their grief prevent them from being reincarnated.

Tokyo RPG Factory, while a fairly new developer, has made some good press in the past with I am Setsuna and Lost Sphere. I missed out on both these titles, so I was curious and optimistic about this game, especially since I’m a fan of hack-and-slash action rather than the classic turn-based combat.

The combat was fun, flashy, with different fighting styles to choose from. Unfortunately, the premise that initially intrigued me so much didn’t hold up in the face of its slow narrative and lack of nuance.

Protagonist Kagachi is a ‘Watcher’ – someone tasked with helping those poor souls who can’t move on. This is not a glamorous job: you really get a sense of how much pressure this belief system puts on the people of this world. It’s pretty creepy, actually. In the first mission of the game, two parents decide to take their own lives so that their deceased son doesn’t have to pass into the next life alone.

Protagonist Kagachi is what you’d get if you threw a bunch of darts at a bingo card made up of anime character traits. White hair, wielding a sword, dead parents,  and an edgy, standoffish attitude. But that’s fine, I mean, not every protagonist needs to break the mold. As long as he engages with the story and helps deepen the plot, I’m all for it.

Unfortunately, there’s not much depth to the characters of Oninaki. The story is held together by a bunch of loose threads that ultimately do the premise an injustice. Cool moments, like a surprise appearance of the mysterious Night Devil or the aftermath of a cult-led mass suicide, are made weak by boring dialogue scenes and hasty resolutions.

The story does get more interesting as it goes on, but it left me feeling hollow, with many avenues of the story left unexplored. They could have done so much more with this, and it’s disappointing.

“You really get a sense of how much pressure this belief system puts on the people of this world.”

Likewise, the world that at first seems bustling and lively quickly turns boring and empty. There’s a whole town Kagachi can run around in, but with barely anything to interact with. Oninaki is hardly the first game to be guilty of this, but it’s an annoyance every time I see it.

The world only seems to exist for Kagachi to go from one dialogue scene to the next. Leading the protagonist around like this is pretty much a staple of any RPG, but a good one will distract you with an interesting world and memorable NPCs. With a boring world and endlessly repeated NPC models, I can’t say Oninaki achieves its goal.

So do I hate this game? Not at all! While I wouldn’t say the combat makes up the entirety of the game’s shortcomings, it certainly kept me from setting down the controller.

Kagachi attacks by using the weapons and abilities of Deamons: souls who instead of reincarnating, manifest their powers within Kagachi. Each Deamon acts as a different weapon, with a whole different range of attacks to use. Each one is suited for a different play style, and you can switch between up to four of them.

Attacks are flashy and cool to look at, and the different play styles add an aspect of strategy that I really enjoyed. Deamons will be underpowered and a little clunky to wield at first,  but the game frequently rewards you with Deamon Stones, which are used to unlock skills and abilities. If you’re invested in learning to use a particular Deamon, with a couple of upgrades you’ll start mowing down monsters left and right. I liked all of them in their own way, and switched between them frequently.

Deamons could have doubled really nicely as fleshed out party members, but no such luck. They’re literally ghosts,  so it makes sense, but I can’t help but feel like this is a missed opportunity. They have some mid-battle voice lines, but they aren’t subtitled and there’s no English audio option.

Each one has memories you can unlock,  but rather than make those backstories part of the plot or a cool side mission,  they consist of scenes where the Deamon reminisces about  their past life without so much as an illustration to go with. 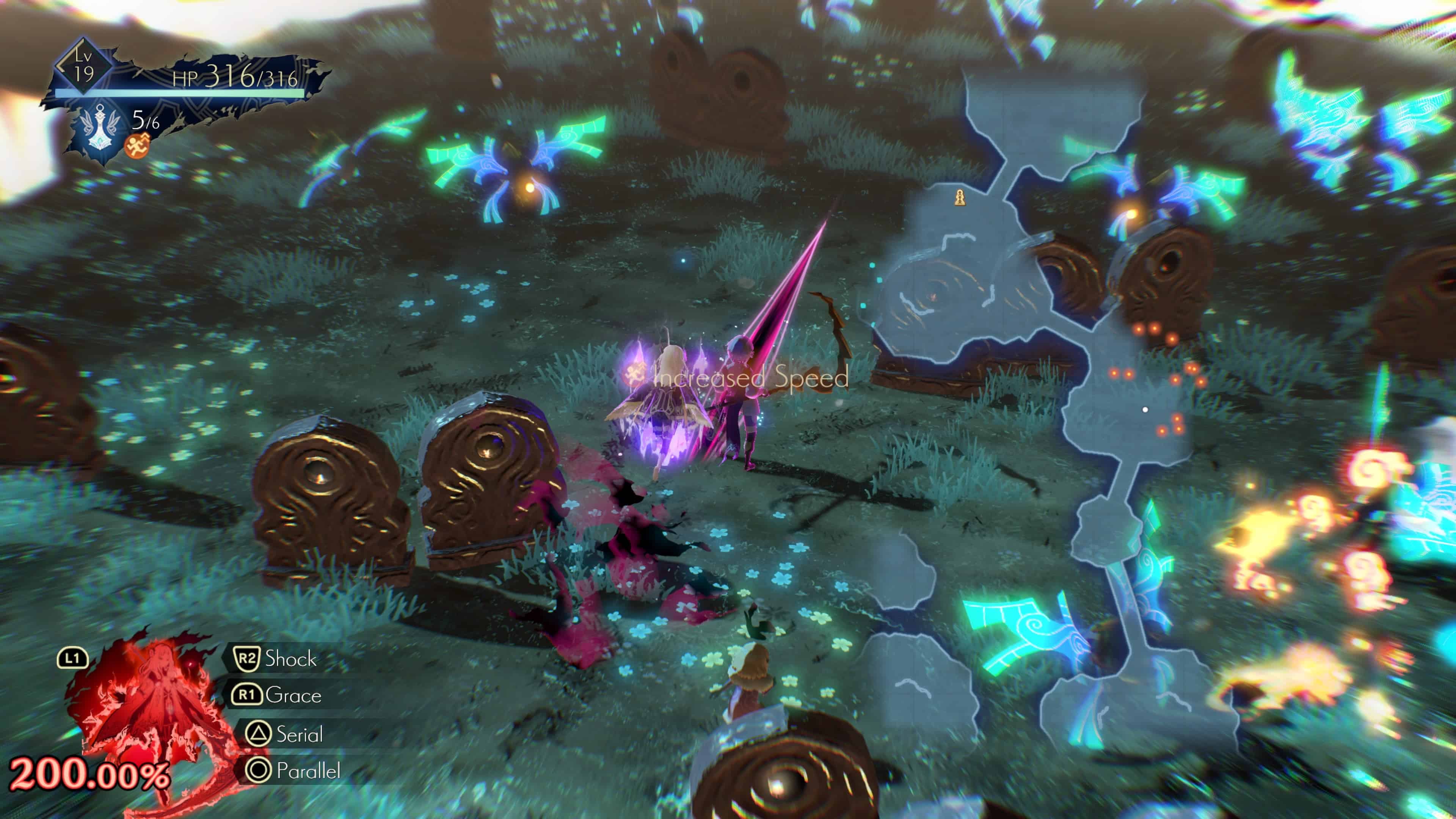 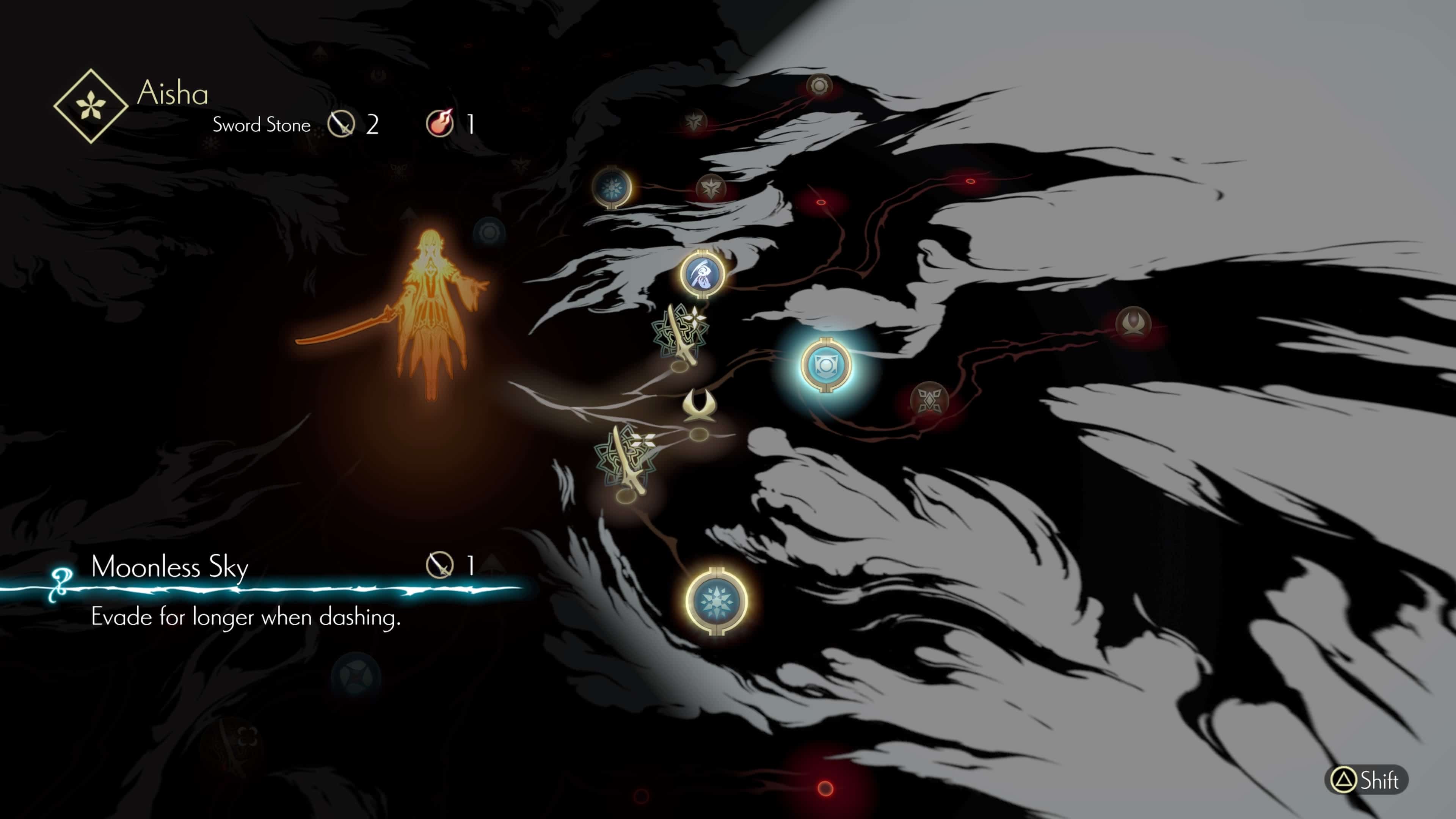 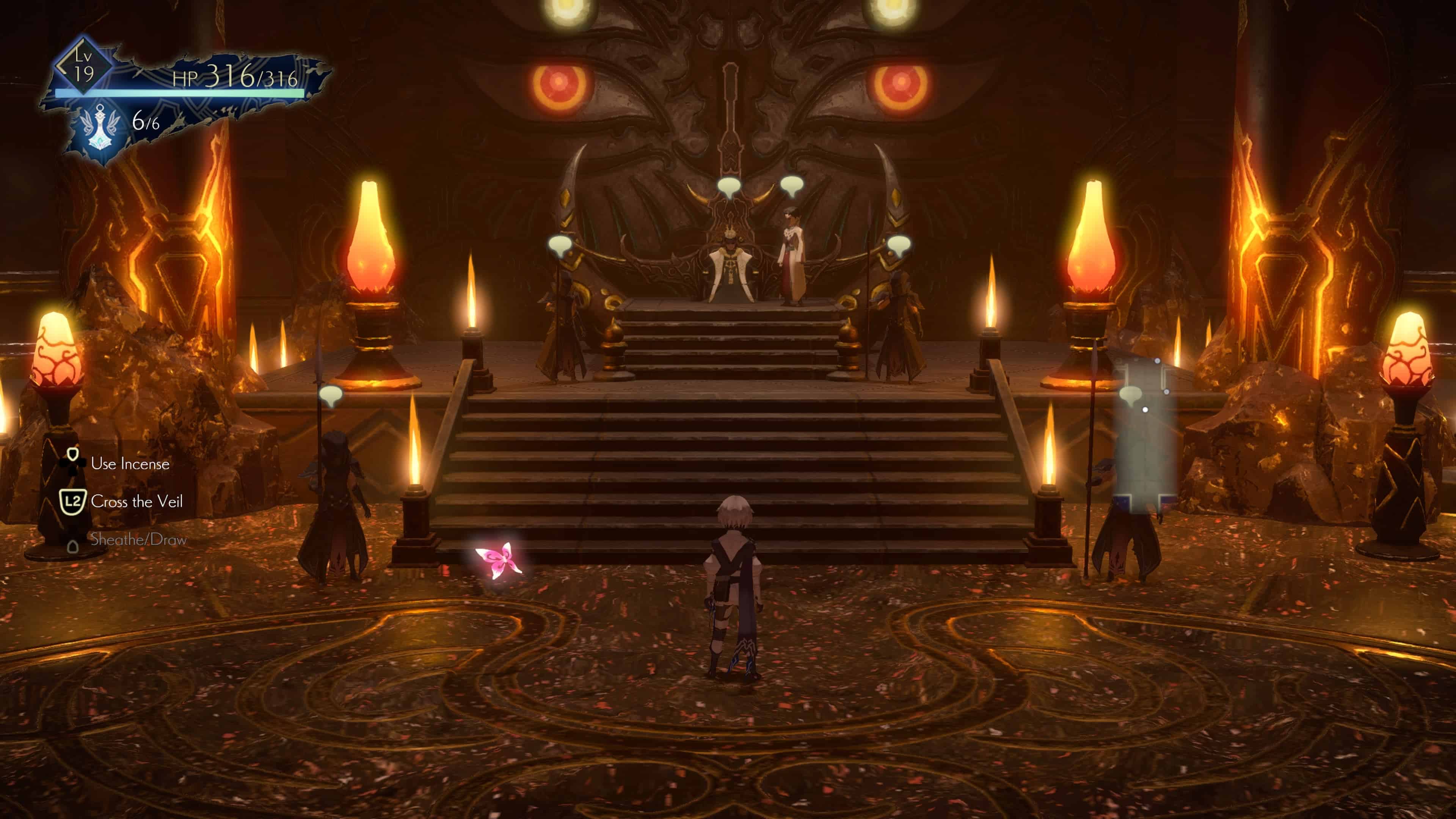 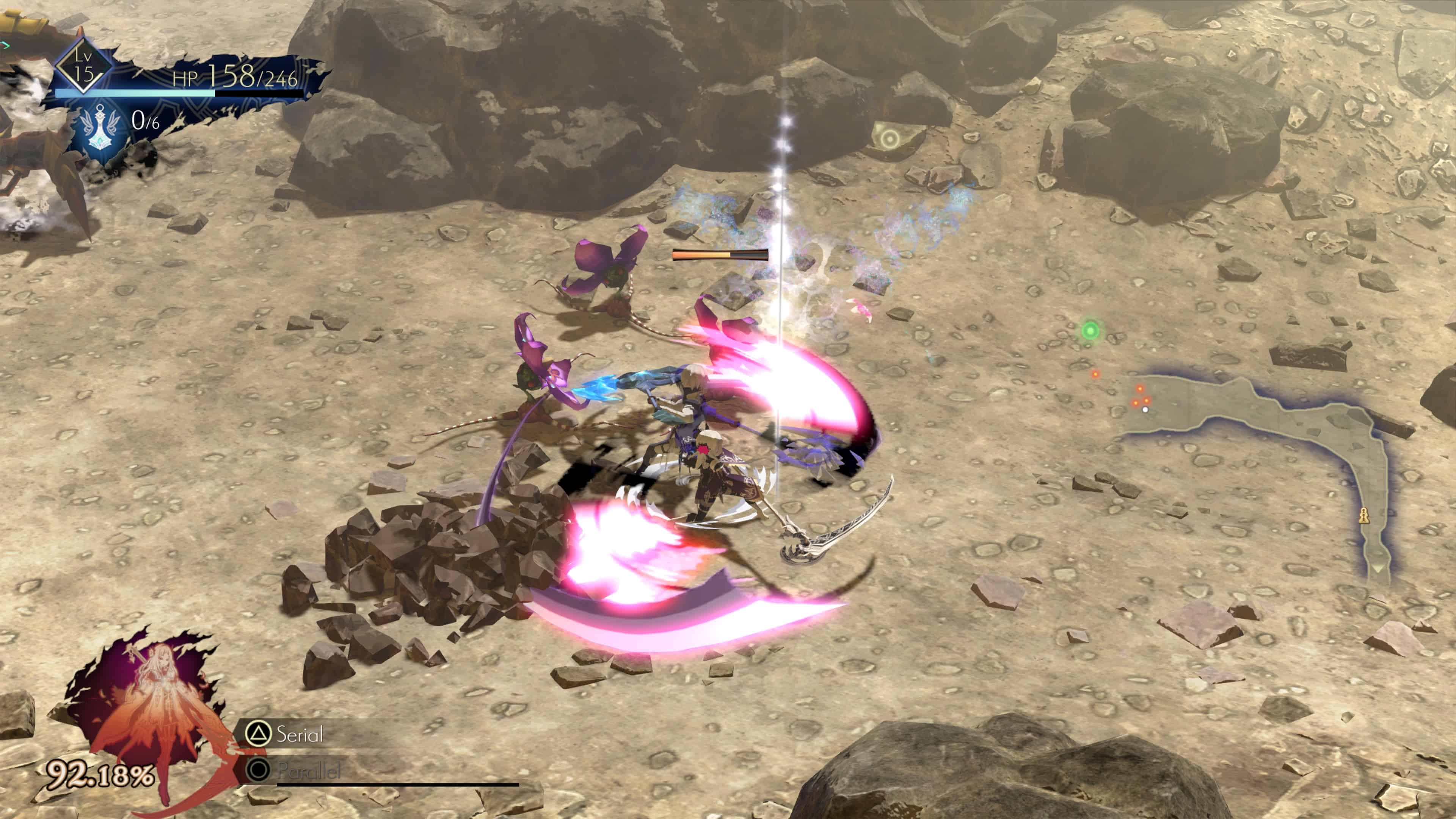 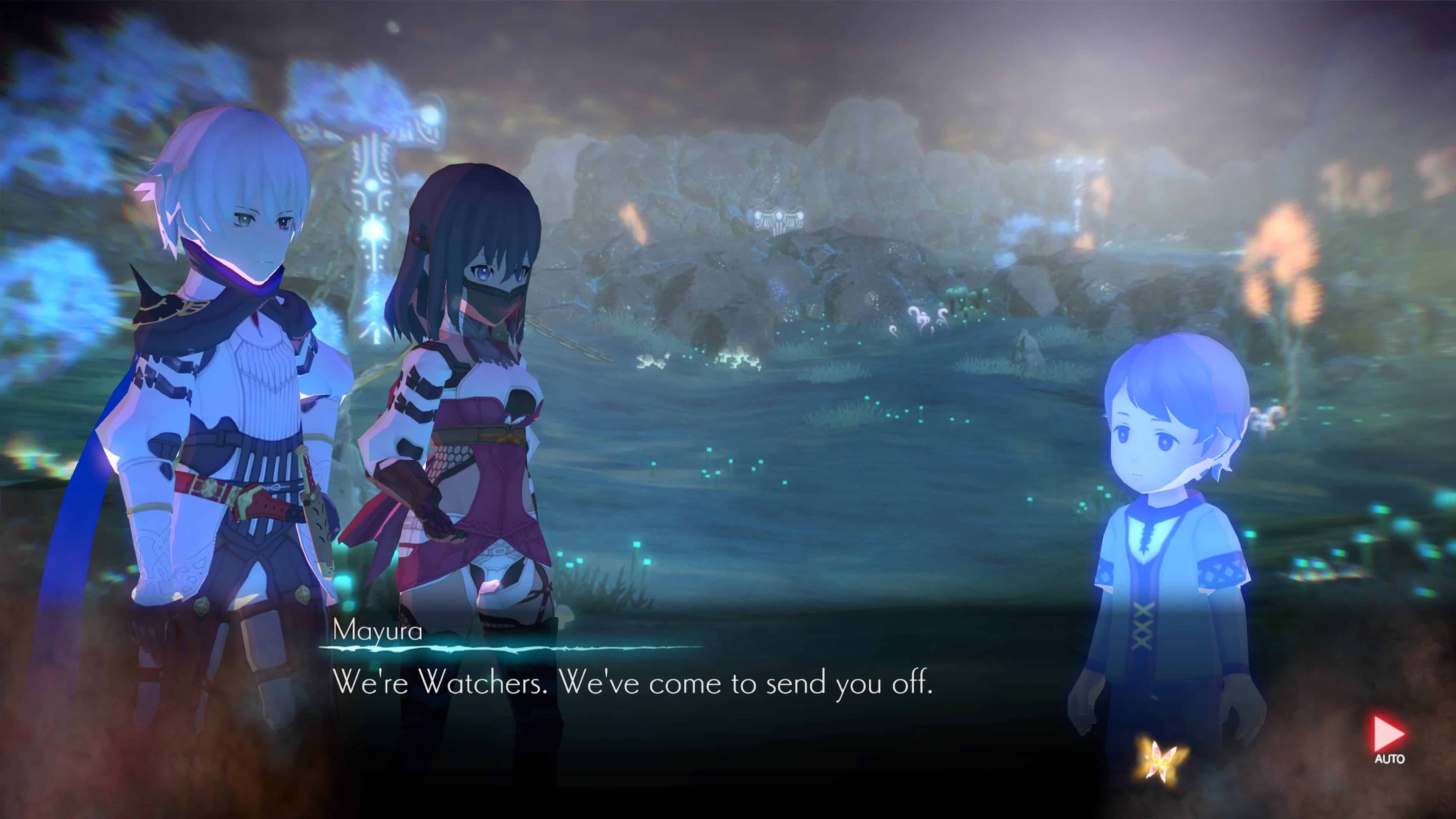 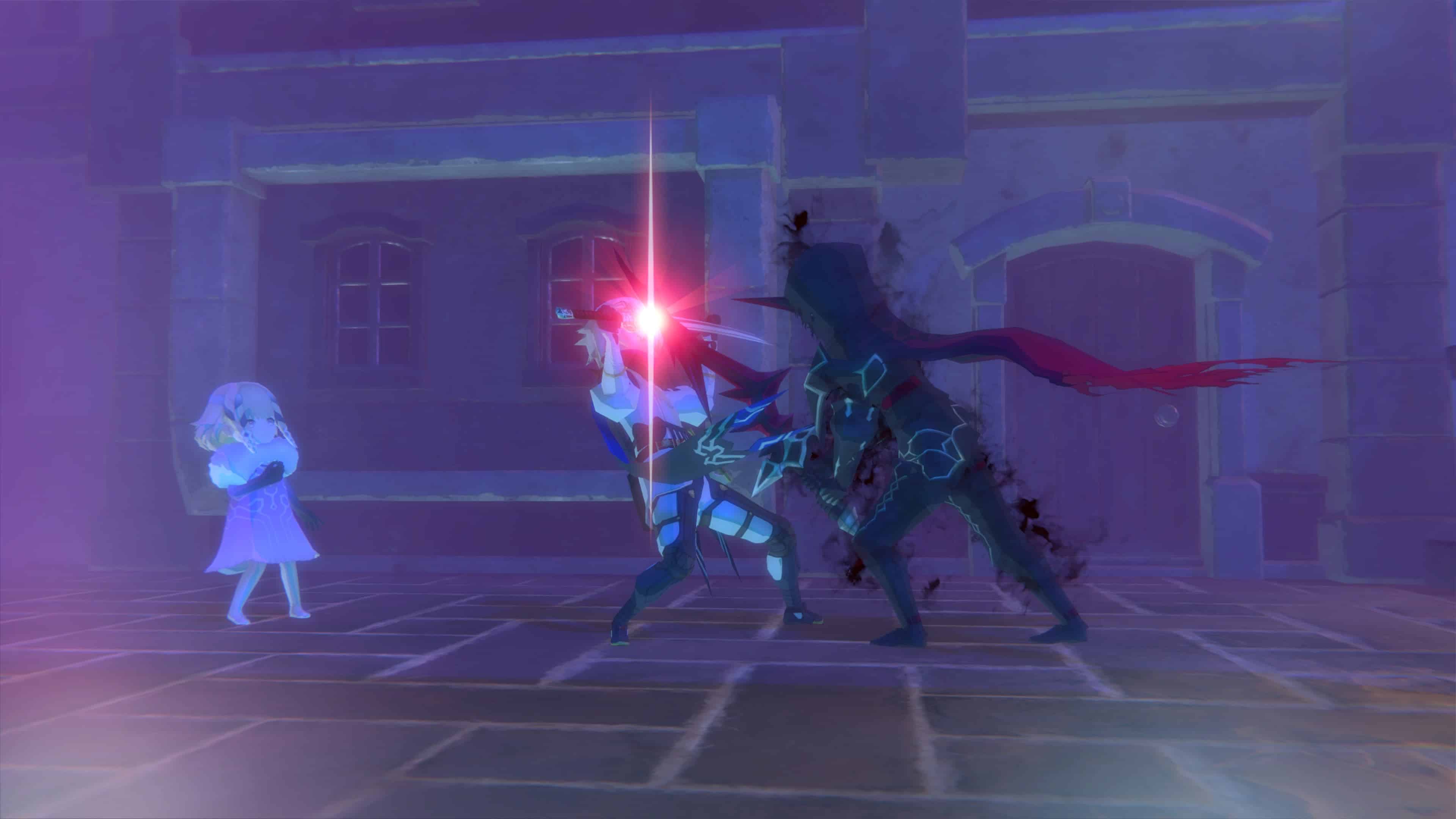 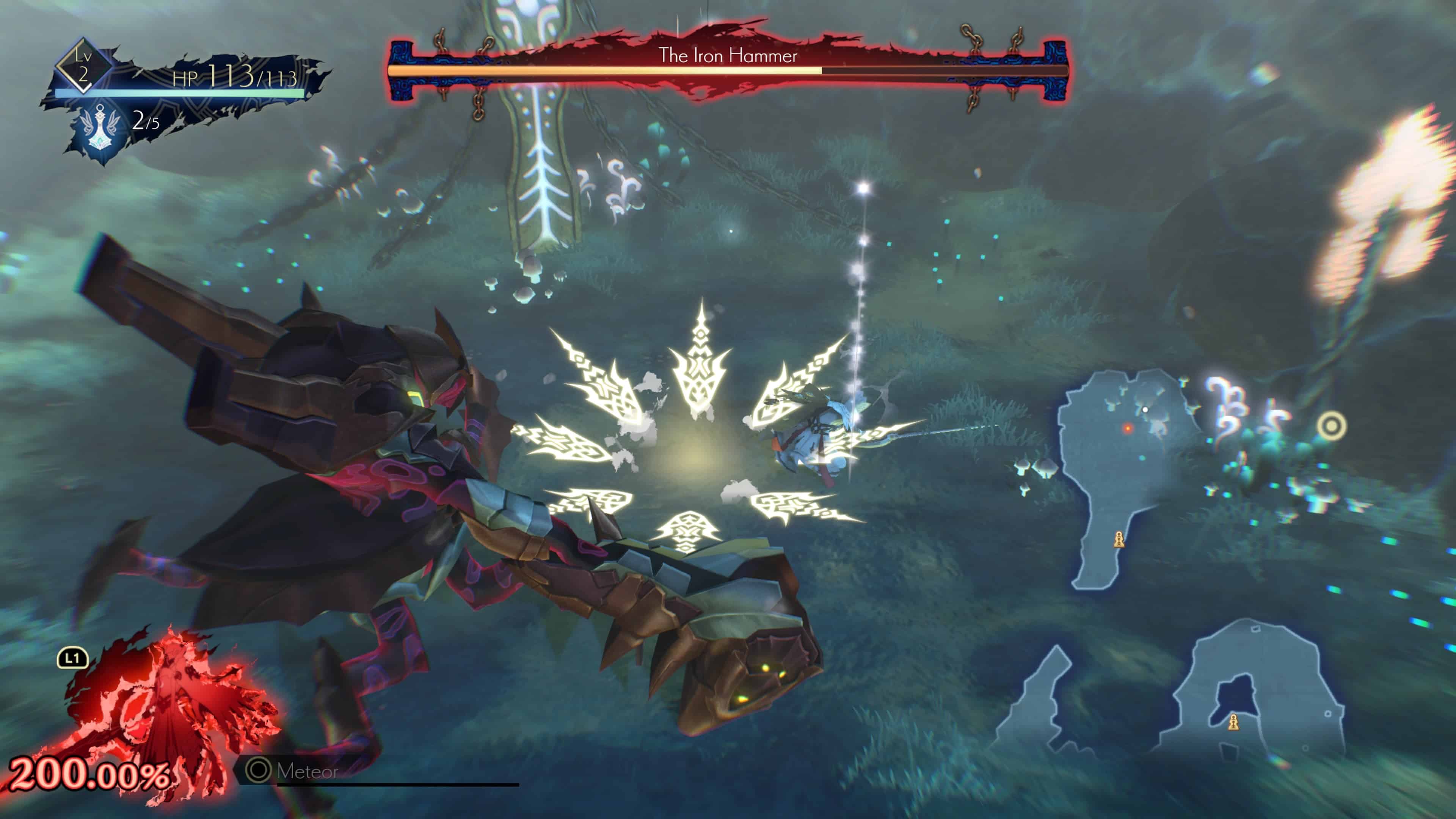 The monsters that inhabit each level are colourful and creative, and provided a nice level of challenge. Bosses in particular were very cool,  with memorable designs and an awesome last-strike scene when you beat them. Some enemies are more easily defeated using specific Deamons, so it’s a good incentive to switch things up every now and then.

The difficulty is a decent challenge, and I died quite a few times. I appreciate the difficulty, but the lack of a block button made this feel unfair at times. Bosses deal massive damage, and several of them have moves that can end up killing you in one hit if you’re unlucky.

Another aspect of the game I liked was the art style and designs which felt similar to classics like Final Fantasy. While the character models themselves are simplified, we’re compensated with beautiful illustrations of the characters.

The illustrated characters look amazing, although the simplistic in-game designs look like they’d be at home on the 3DS rather than a current gen console, even reminding me of some older RPGs like Tales of Symphonia. There’s a lack of  cutscenes as well, just endless scenes of dialogue with characters waving their hands about in that classic video-gamey “I’m talking” way.

Regardless of my issues with Oninaki, the game has a lasting sense of charm that kept me playing for far longer than I expected. The satisfying action made putting up with the lacklustre story worthwhile, for me at least. In addition to the wistful art direction,  the soundtrack, sprinkled with some Gaelic inspirations, is one I’ll be sure to listen to later. And even if the plot was laughably predictable, it was cute to watch the tin man Kagachi grow a heart.

There are some very powerful ideas to explore here, but for the most part, Oninaki barely scratches the surface.

It’s a crying shame, because there was a lot that could have been done to boost this game from good to great. But Oninaki misses the mark on too many things, which does a disservice to the things about it that I loved. If this were a 3DS or Vita title for half the price, I would be satisfied with it. As it stands, however, the fun I had with Oninaki doesn’t quite make up for its shortcomings.