Indivisible made my fingers hurt. This is a game with two very distinct parts, each of which proved hazardous to my brittle, old digits. While exploring the world, it’s a side-scrolling platformer, like your classic Metroids and Castlevanias. But when you encounter enemies, the game becomes a fast paced, semi-turn based RPG. When the going gets tough, both of these parts can be physically demanding. But despite my anguish, I still deliberately did most of the extra content before fighting the final boss. The minute-to-minute of Indivisible is so fun, I didn’t want it to end.

Our protagonist is Ajna, a fearless teen living in a small town, who finds out she is the chosen one fated to save the world from a great evil. It’s standard fantasy plot 101. What sets Indivisible’s narrative apart, however, is The Inner World. See, Ajna has a small dimension inside her mind. Whenever she meets a new playable ally (referred to as “Incarnations”) they will Pokéball-style warp into her brain and stay there.

With over 20 Incarnations at launch, most of whom are optional, the Inner World quickly becomes your central hub. A town you can zip to whenever you like, to chat, level up your stats, and figure out where to go next. The Incarnations will pop out during battle and cutscenes, where their varying relationships shine. They don’t all like each other, they don’t all like Ajna, and there’s some Ajna doesn’t want in her head. It’s a fascinating, complicated dynamic that keeps the story and battles fresh every time you meet someone new.

The entire party living in Ajna’s noggin means she’s on her lonesome when running and jumping around the world. Typical for the genre, Ajna learns abilities during her quest, allowing her to reach new areas, and find goodies in previous areas she couldn’t reach before. You gain new abilities at a steady, constant pace throughout the game. In the latter half of the game, you’ll need to figure out which combination of your many abilities you’ll need to get through an environmental puzzle. Lab Zero have crammed the game’s already enormous maps full of secret hideaways, so it’s a genuine joy to go back and explore prior areas in new ways. Exploring this massive world is exciting and thrilling.

Unfortunately, I kept struggling with the game’s map. It’s good at showing you the scale of each area, but the various zones within it are only marked with vague colours. Several areas connect together, but entrances and exits aren’t marked on the map. Some secret passageways aren’t marked either, so you need to just remember where they are. Some rooms are marked, some are not. NPCs are not marked. The map legend shows a marker for “Main Quest” that would’ve been handy the few times I wasn’t sure where to go next; unfortunately, I never saw it.

This doesn’t take away from the fun of exploring this world, and there’s a joy in discovering areas without any help. But the game encourages a lot of optional backtracking during its final act, by which point exploring the same areas again based mostly on memory felt a bit tedious.

Similarly, I found the battle system to be energetic and entertaining, but with a few nagging issues. Attacking an enemy in the field initiates turn-based(ish) combat. If you’ve played the PS1 JRPG Valkyrie Profile, combat works in a similar way. Ajna can bring up to three Incarnations into battle, and your four characters will be mapped to one of the face buttons. Each character has a small circular “pip” under their health bar, which slowly fills up to indicate when their next turn is. Once a turn is ready, a character can perform one of three abilities by pressing their button in combination with moving the analogue stick. Each character is simple to control on their own, but the fun comes from combining four of them together. If all four pips are full, the entire party can attack during the same turn.

Some enemies can only be damaged in mid-air; only some Incarnations are able to launch them, and only some are able to jump up to attack them further. Some Incarnations can break enemy guards, some can attack multiple enemies at once, some can heal the party, and so on. There’s so much variety on offer, I enjoyed testing out different combinations of characters, and there was always someone new to play with if I got bored of my current party composition.

Once the party’s pips are spent, it’s the enemy’s turn, but you’re still in control. Those face buttons are now used to block. If you block at the exact moment an enemy’s hit lands, you achieve a Clean Block, negating damage. This means there’s never a dull moment in battle, you never need to sit around waiting for your next turn. You can find collectables called Ringcels which can be used to purchase Strength and Defence upgrades. Strength means you get extra pips to permanently use in battle, letting you rack up combos in new and delicious ways. I was extremely grateful that the reserve Incarnations gain XP alongside the active party, the entire party’s HP is replenished after winning a battle, and that saving, loading and reloading was near-instantaneous, encouraging this experimentation even more.

“These moments don’t occur very often, but when they do, they make combat far messier than it needs to be.”

It’s a shame that a lot of this experimentation goes to waste, especially in the final third of the game. Regular battles in Indivisible tend to be one of two kinds: either the enemy has a lot of HP but doesn’t deal much damage, or they’ve got really low HP and can kill a character with one hit. The high-HP enemies are your chance to play around with character combinations, but your flashy new combo becomes less flashy when you need to see it numerous times per battle.

And the one-hit kill enemies are all about Clean Blocking every time they attack, which is hard to do precisely if multiple enemies are attacking at once, and even harder if your view is blocked by another character’s sprite, or something in the environment. Clean Blocking an enemy’s entire combo means button-mashing the block button repeatedly until it ends.

If an enemy attack knocks Ajna off a platform during battle, combat ends and the enemy regains all their health. But since Ajna didn’t defeat them, her HP doesn’t heal, and she can’t regain any outside of battle. These moments don’t occur very often, but when they do, they make combat far messier than it needs to be. 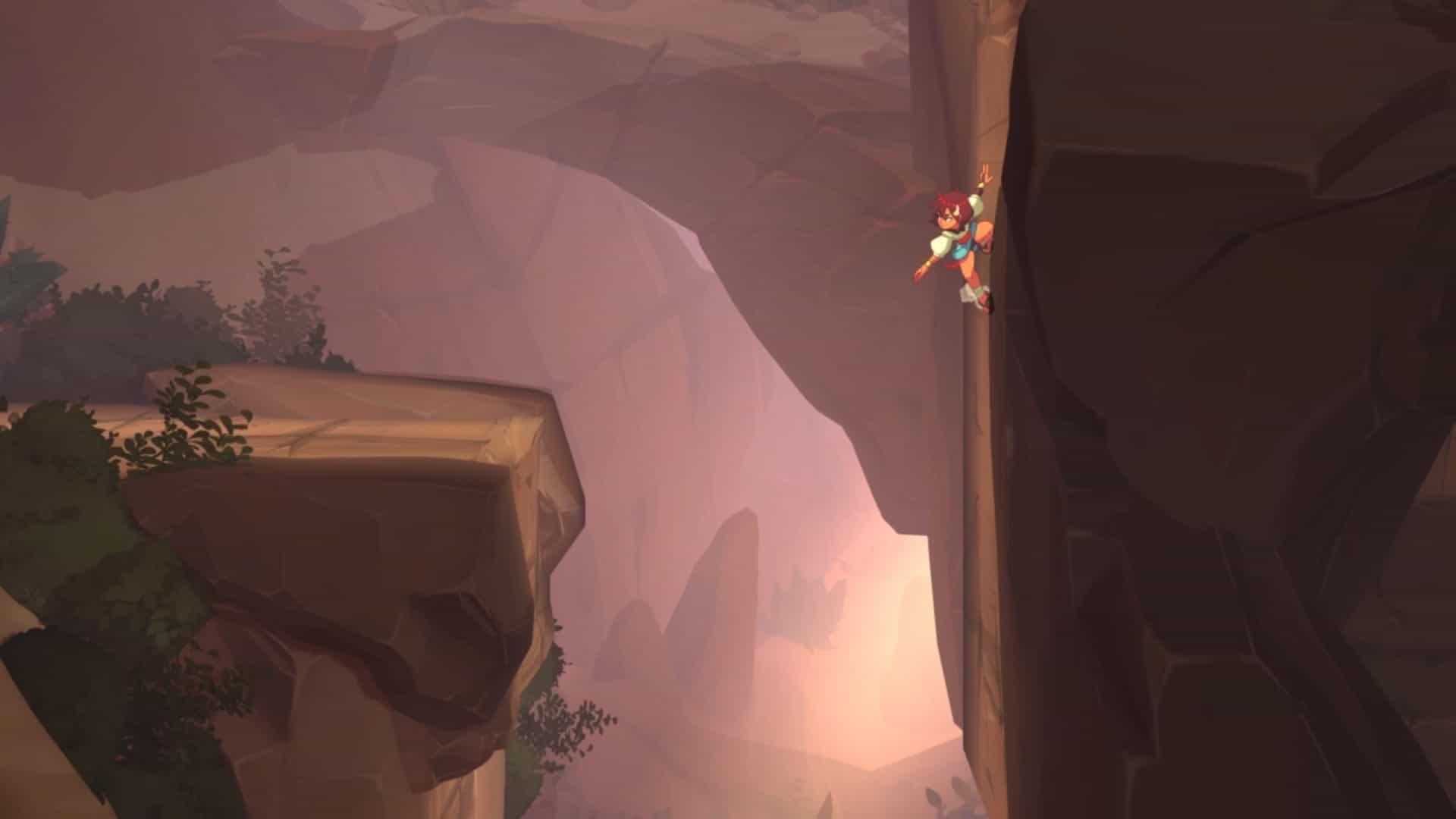 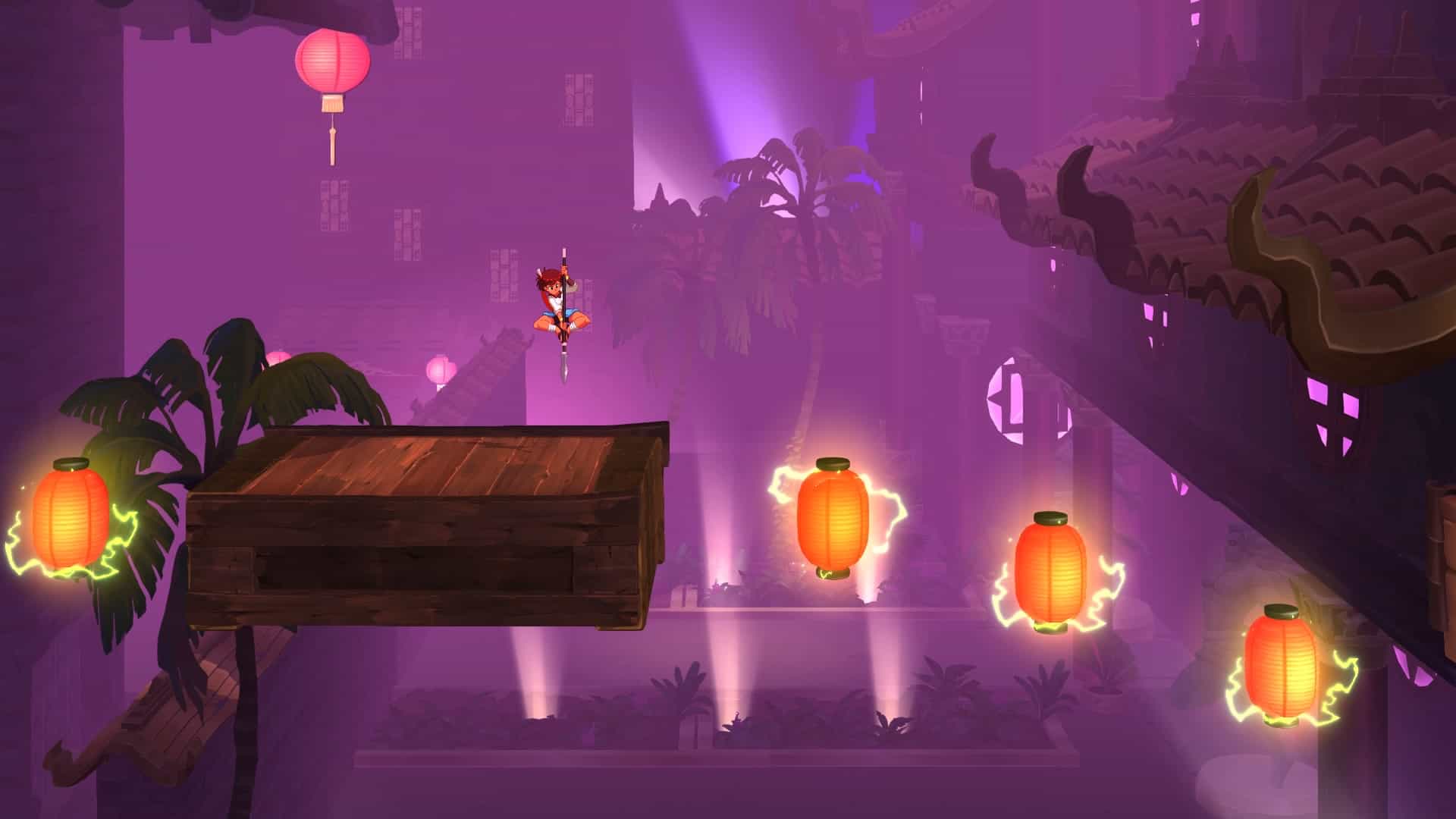 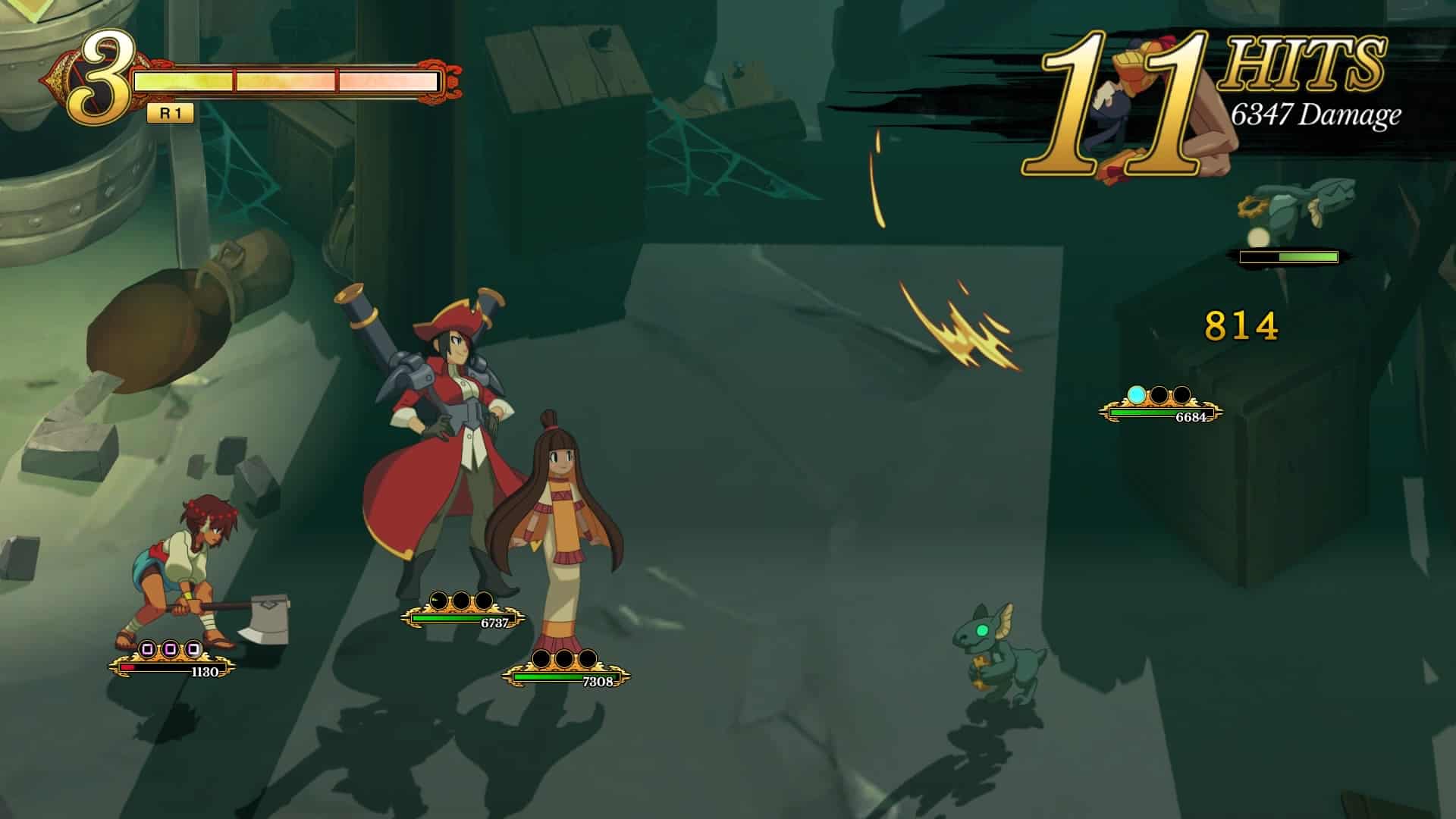 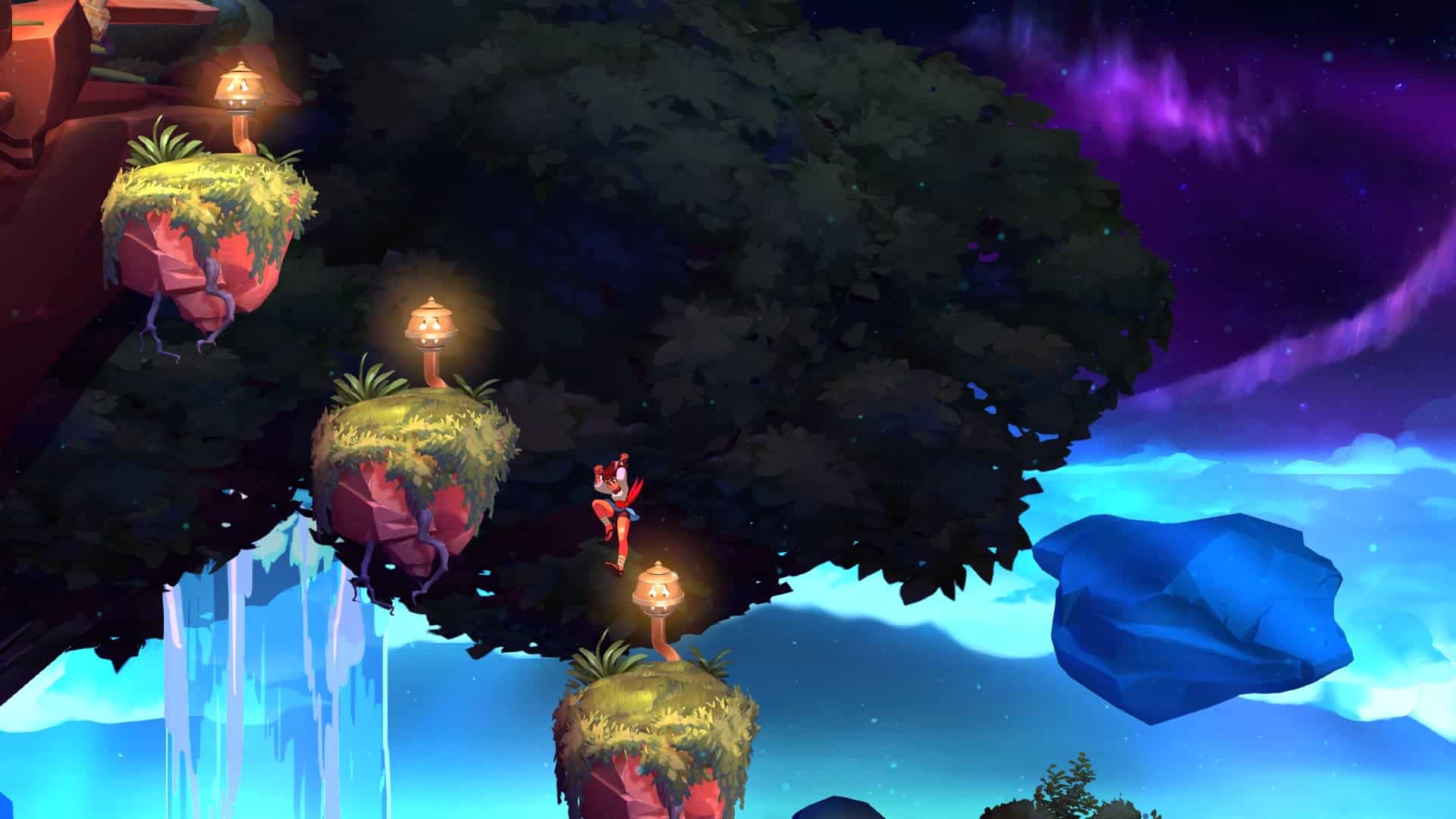 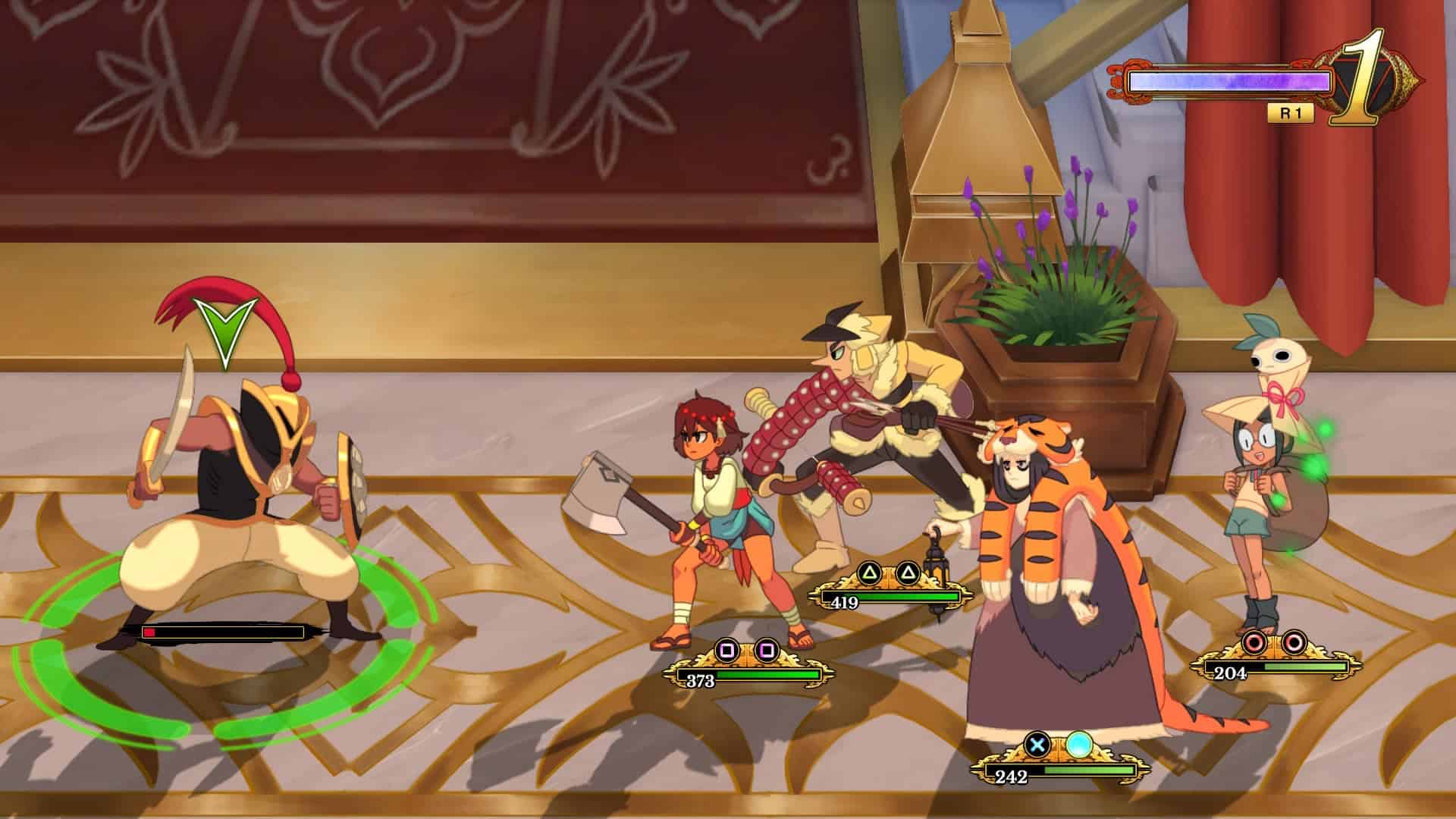 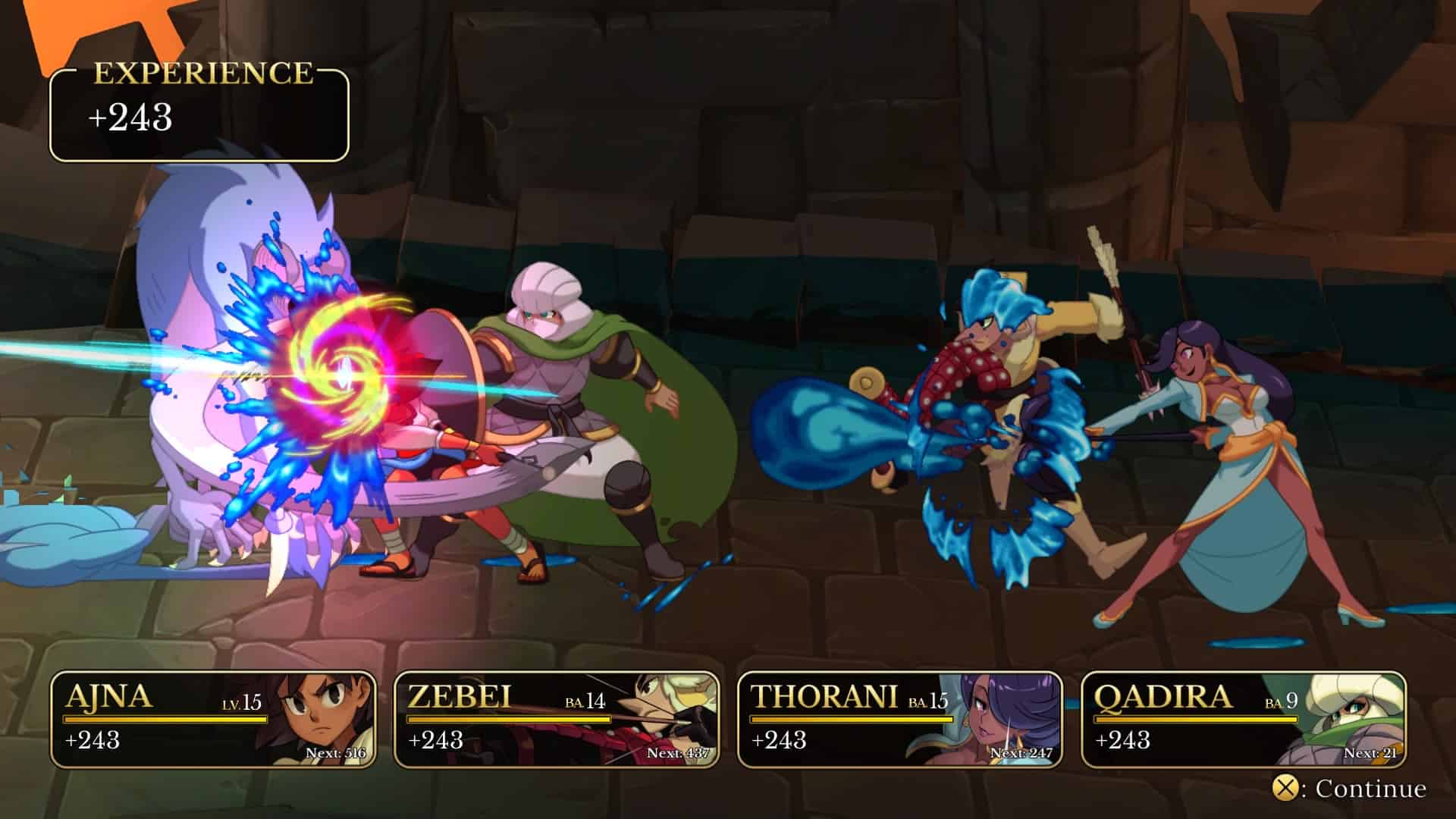 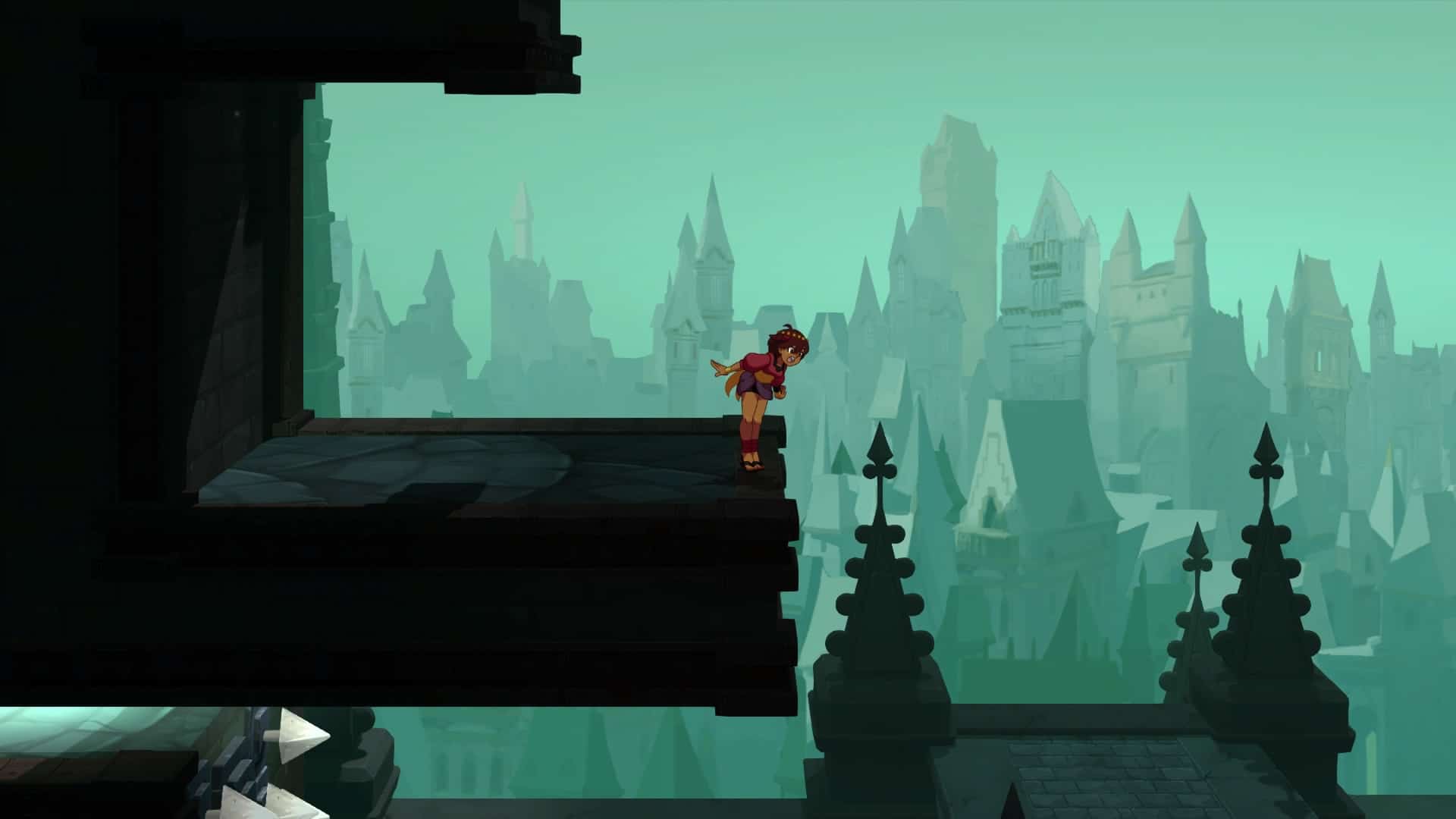 The boss battles fare far better than regular encounters, each having some kind of interesting gimmick to strategise through. Throughout the game, many bosses creatively require switching back and forth between platforming and battling to defeat. During these fights, particularly in the final third, it’s noticeable how the platforming is more challenging (and rewarding) compared to the fisticuffs. Again, the issues I faced didn’t detract from my enjoyment of the combat, or my appreciation of its systems, but it was frustrating to encounter them over and over again.

Developer Lab Zero Games is known for consistently updating and improving their previous game, Skullgirls, so I can only hope a similar approach is taken for Indivisible. This was a Indiegogo success story that’s been in development since 2015, and clearly a lot of love and care has gone into the final product.

The fantasy world of Indivisible is inspired by real-life South East Asian cultures. The game takes advantage of its 2.5 graphical dimensions – all the characters and enemies are crisp 2D sprites, but all the environments are in 3D. Each character is uniquely detailed and full of personality based on design alone. Even background NPCs look interesting enough to be playable on their own. There’s also so many dogs in this game, I want to cuddle each and every one of them.

Every environment is gorgeous, full of colour, and completely distinct from each other. Even when I had issues with the platforming, this game was so pretty to just look at. The soundtrack was composed by Hiroki Kikuta, of Secret of Mana fame. Just as well, because it feels like listening to an old JRPG soundtrack. All the pieces are catchy, memorable, and perfectly fits with the game’s aesthetic.

All the voice actors also do a stellar job, and are composed of a diverse group of actors, including Anjali Bhimani (Overwatch), Michael Dorn (Star Trek) and Matthew Mercer (Critical Role). The script is also well-written; I particularly enjoyed the funny “Item Obtained” messages.

Ajna’s voice actor, Tania Gunadi, is an American actress of Indonesian descent. It seems tiny, but hearing a video game protagonist speaking in an Indonesian-American accent blew my mind. It made me realise how few games feature protagonists speaking in a non-Anglo British or American accent. And as a person of colour, it’s a part of representation in games I’d never even considered until now. One optional character, Tungar, is a middle-aged man who speaks in a South Asian accent. Unexpectedly, Indivisible made me feel personally represented, hearing a character in a game sound like my dad.

Indivisible is not a perfect game, but I love it anyway. In fact, I’m going to keep playing it after my review because I only discovered 19 Incarnations by the end. It takes modern game ideas and blends them with an old-school gaming aesthetic. It’s ambitious with its gameplay but presents a mostly user-friendly experience. There aren’t many other games like it. So what if my fingers hurt a little?