The John Wick film franchise is amazing. Not only are they filled with over the top actions set-pieces and spectacular violence, but they’re also the reason Keanu Reeves is back in vogue. With a franchise this huge in the public consciousness, it was only a matter of time before it made its way to other media. After a middling performance with John Wick Chronicles, the franchise is back with a bang in John Wick Hex.

Set before the first film, John Wick Hex focuses on our titular hero as he hunts down crime lord Hex, who has kidnapped Winston and Charron. The storyline is simple, and is presented like a graphic novel. Static images of the characters conversing move along the screen as they discuss Wick’s hunt. It’s an interesting choice for the series, and one that pays off. We’re not playing Wick the man, but Wick the legend; The almost mythological assassin that stalks the streets of New York in service of the High Table.

The voice acting is on point. Ian McShane and Lance Reddick reprise their roles as Winston and Charon respectively. Their performances feel comfortable, like their slipping into a favourite pair of shoes. They’ve been playing these characters for five years so far, and it shows. Troy Baker brings a certain menace to his role as Hex, that at times gave me goosebumps. A voice that is missing is Keanu Reeves. Wick isn’t voiced at all, which makes sense from a story point of view, as the story is being narrated to us. But it’s still a shame that the actor who made this role famous is sitting this one out.

“I feel it lends the entire game a sort of bandes dessinées/Belgian comics feel, Like Tin Tin by way of hyper-violence.”

The graphics might be a little hit or miss for some. Personally, I loved it. I feel it lends the entire game a sort of Bandes dessinées/Belgian comics feel, Like Tin Tin by way of hyper-violence. There’s just enough detail there for you to tell who each character is supposed to be, but not too much that it spoils the cel-shaded aesthetic. Coupled with the neon pinks and purples, the cel-shading is especially vibrant. It lends the game neon noir aesthetic that’s reminiscent of Drive, Nightcrawler, and especially the film series the game is based off. It’s amazing how such a simple art-style can capture the feel of the franchise.

There were some awkward animation moments. Characters would often rag-doll oddly or fall in a manner that’s akin to tripping on a pebble on bin night. Characters and objects would sometimes clip, and it would lead to some very strange moments during playback. Things look relatively fine from the top-down camera, but get in close and, oh geez, it can get real wacky. There’s also a lack of variety when it comes to actions. John, and the goons he’s up against, often will just repeat the same animation frames for actions over and over again. This is fine if you’re only using melee once and a while, but the lack of variety becomes noticeable with repetition.

The gameplay is a unique experience. It feels like a real-time version of XCOM. The action takes place on a hex grid, and every aspect of level design takes this into account. Hexagons are woven into every environment, whether it be in to form of lams, light posts, tables or pillars. Your field of view will depend on your movement where you’re situated, as you and your opponent’s move on the same turns, enemies will constant dart in and out of view, forcing you to either go looking for them, or wait for them to come looking for you.

Time is your biggest resource, weapon, and adversary in John Wick Hex. Every action takes time, from reloading your weapon, healing your wounds, and refocusing, to shooting, parrying, and taking down your opponents. These actions happen simultaneously alongside the enemy. Often, you’ll find yourself in the middle of an action only to get stunned because the goon managed to pull off their action before you could.

As you play you quickly learn to manage this as you get into the groove of gameplay. There’s a certain rhythm too it.  Figuring out which action may be the best for the moment often comes down to a matter of seconds. Can you shoot the bad guy before he’s able to get a shot off, or would it be better for you to throw your gun to stun him and go in for melee? Would a parry be the best option here? Or would ducking for cover and waiting for them to chase you work better? Figuring out those questions takes time, and experience. I often found myself having to replay entire sections because I had made too many bad choices and put myself into a no-win scenario. 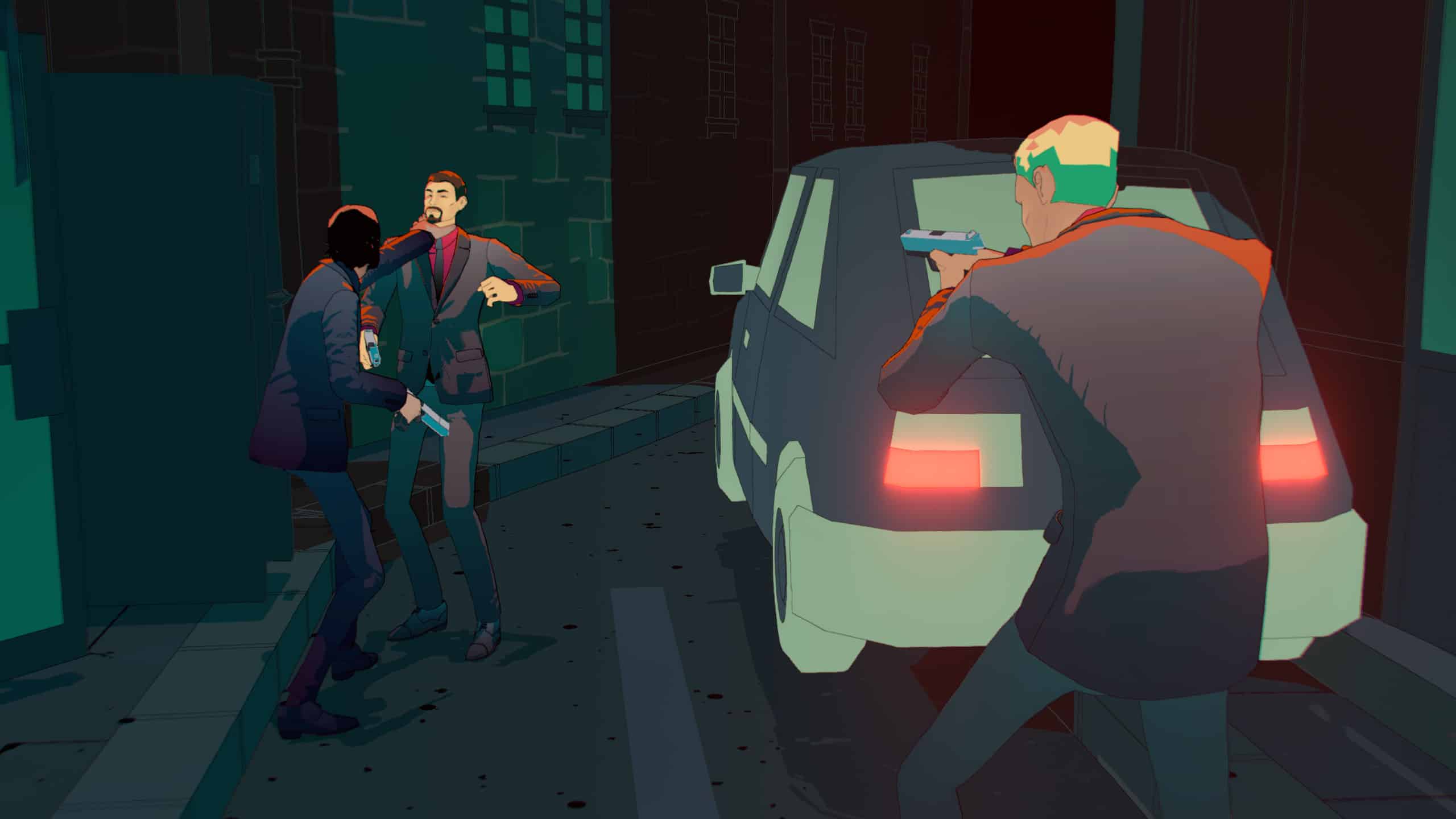 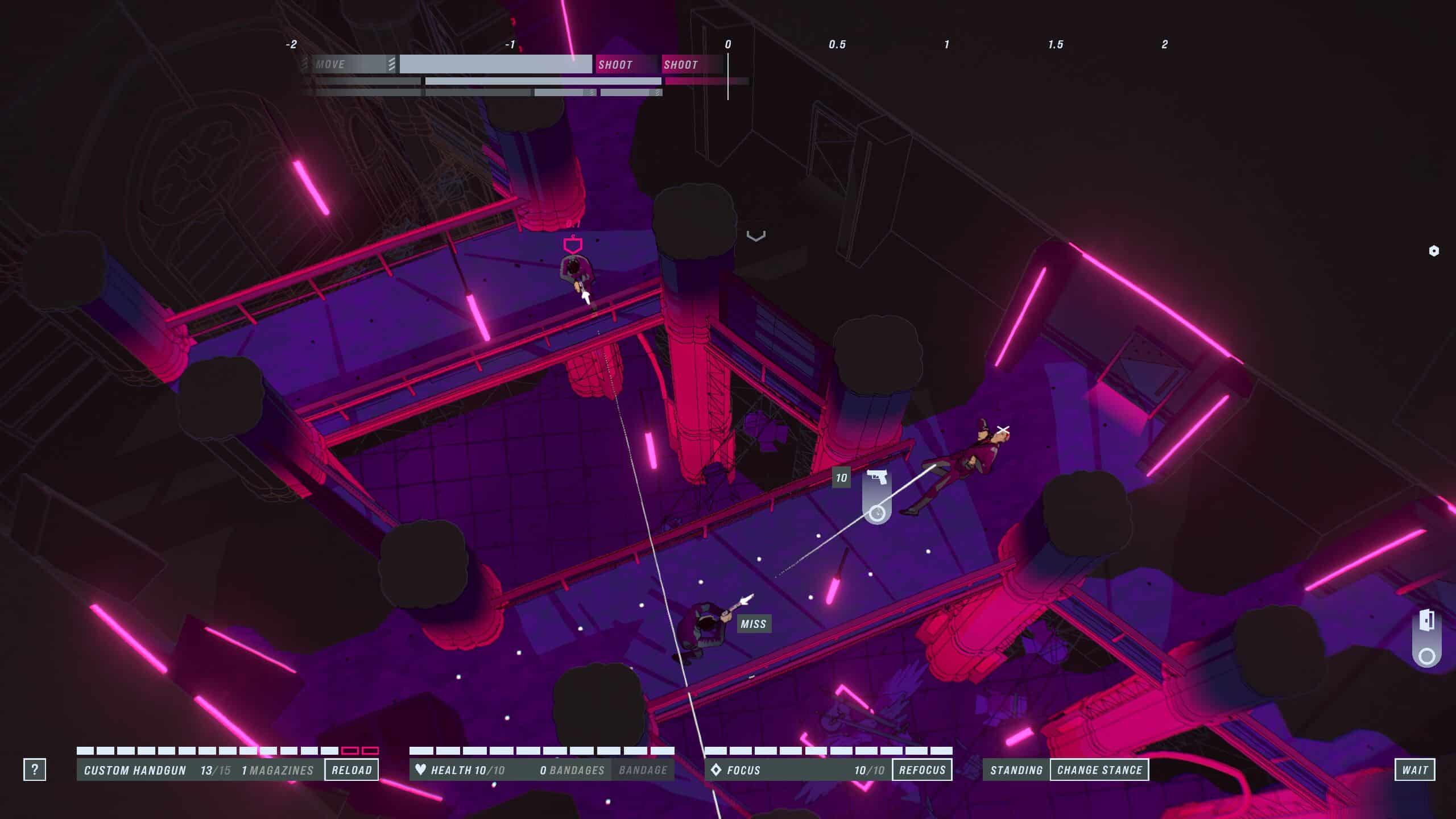 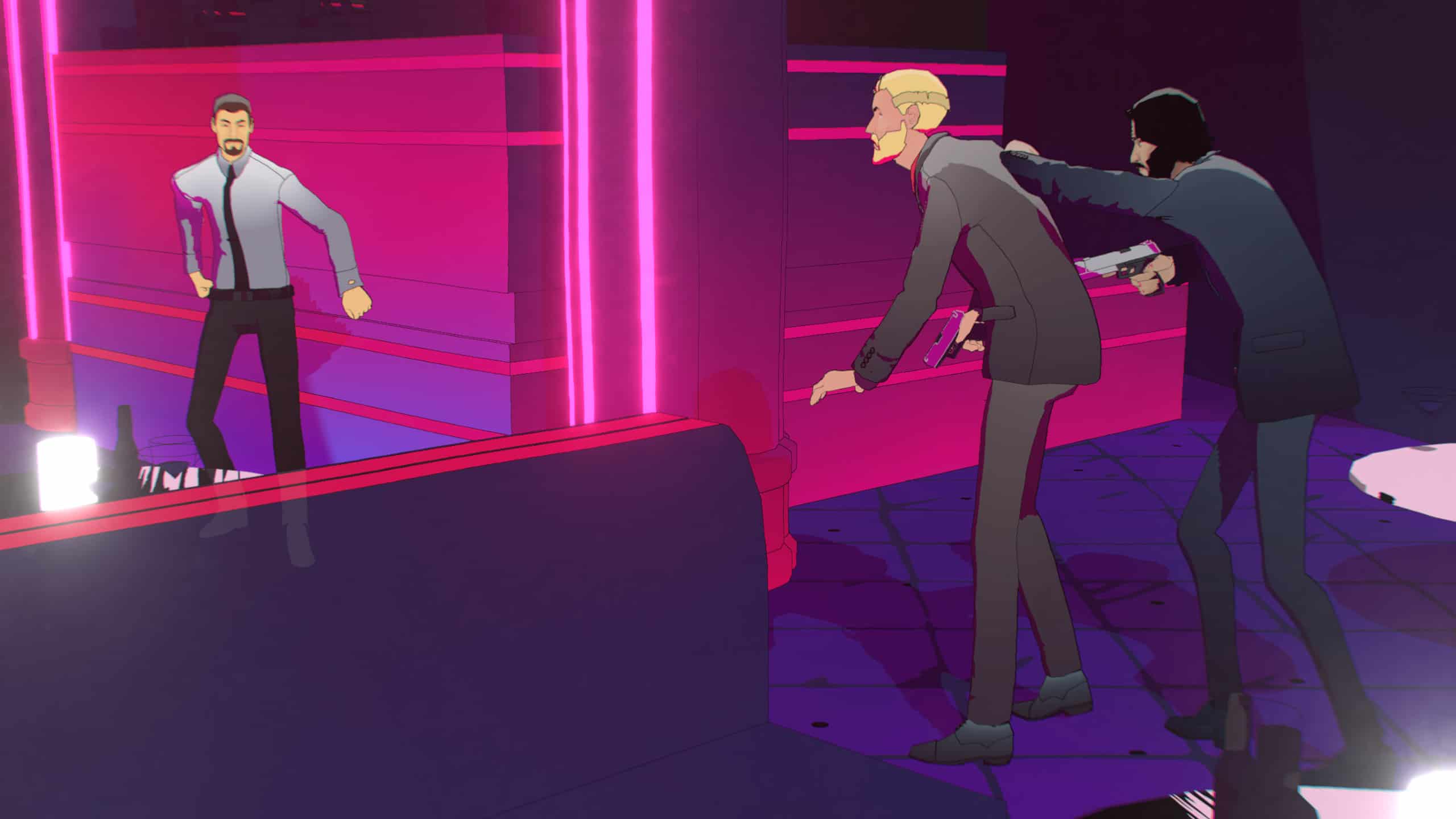 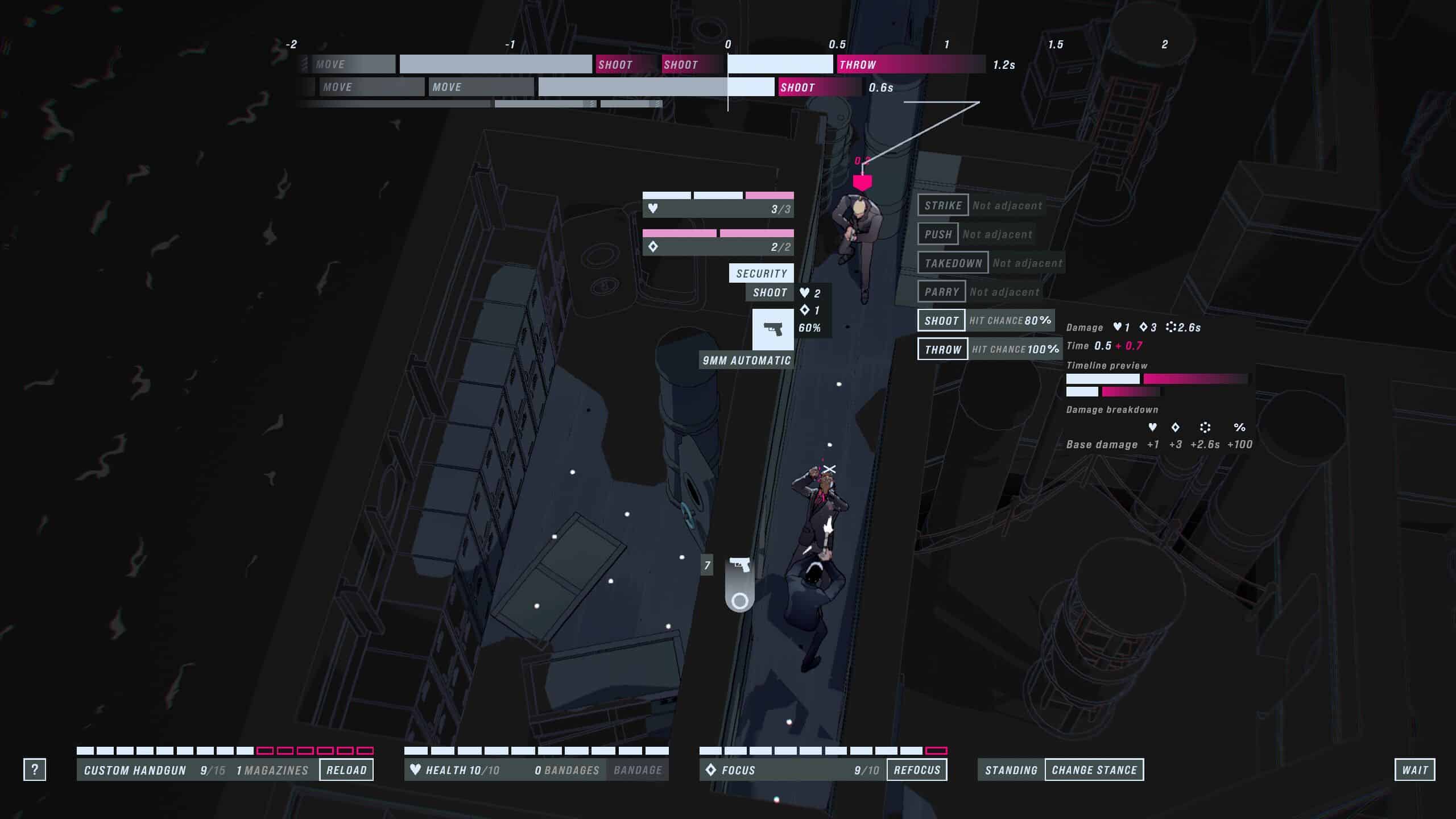 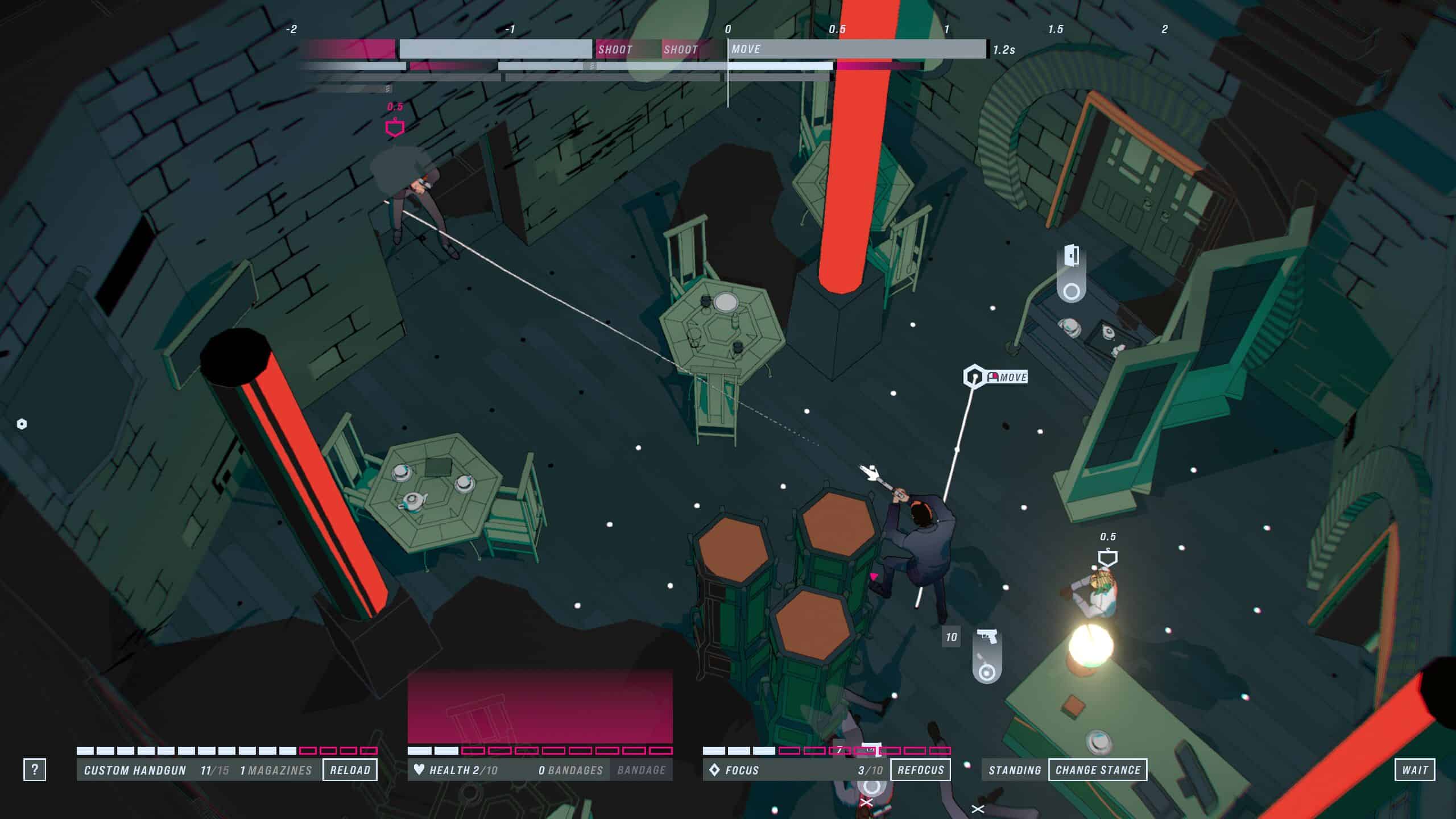 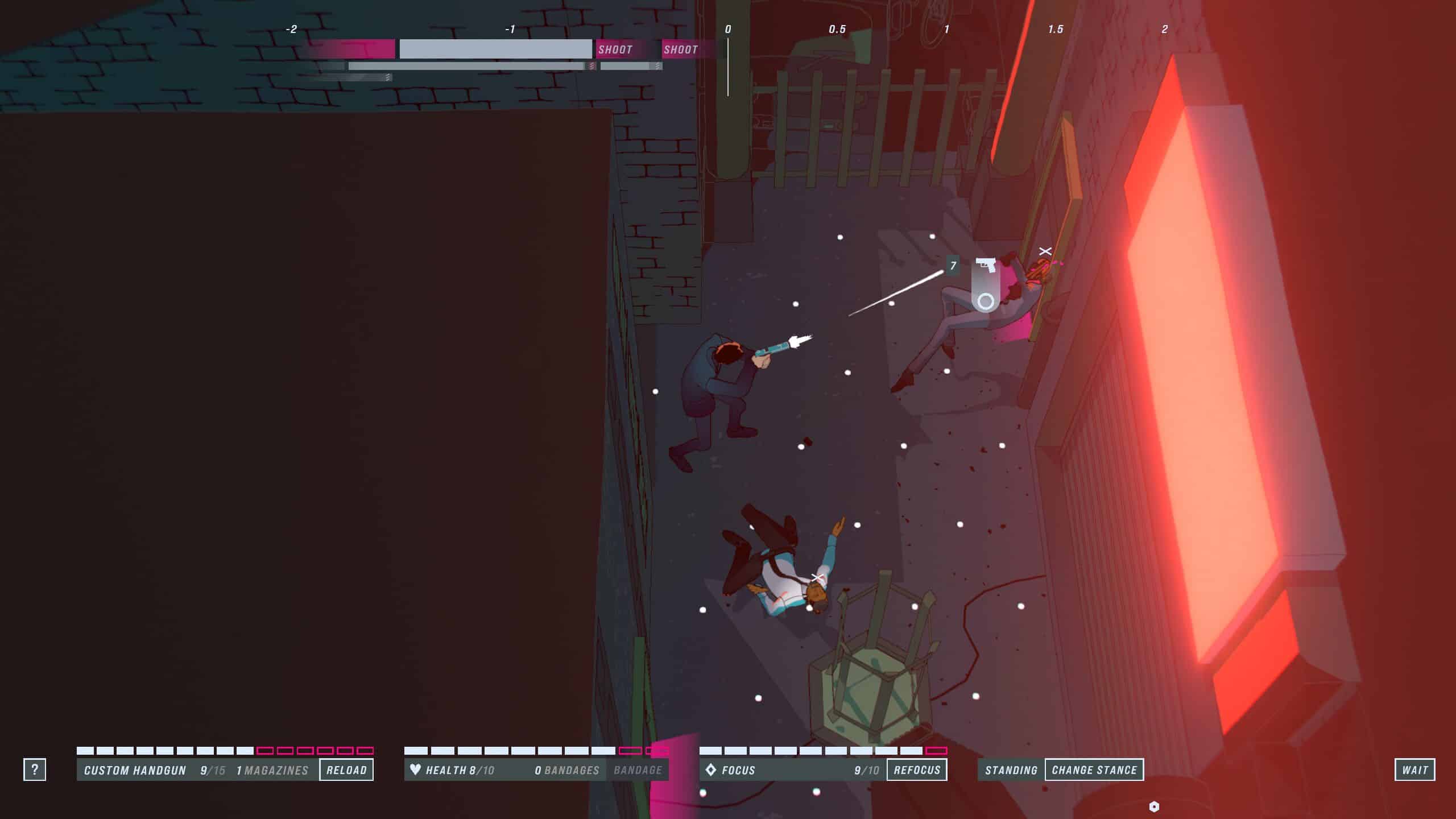 Expedited mode adds to the stress by only giving you 4 seconds to decide the next action. Things can get hectic quickly. I often found myself panicking as I made the wrong move and had to scramble to correct my mistake. It’s at moments like those I wished the game had a dash action, so I could either bull-rush my opponent or quickly get to cover and out of sight. Instead, John just walks at a leisurely pace and it’s extremely frustrating.

In the end, I found myself trying to conserve ammunition as much as possible, as the shooting took the most time out of all the actions. Often it was just easier to sneak behind an enemy and deliver a few quick melee blows or a takedown and then move on to the next target. Eventually, I was chaining attacks and moving around the combat like Wick would in the films. I’m not going to lie, watching the replay of each level at that point felt extremely satisfying.

Overall, John Wick Hex has an interesting take on the strategy genre. The way actions play out in real-time, the saturated neon, the cute cut-scenes; all of it came together to deliver a highly enjoyable experience. While I would often get frustrated, often it was through my own error than anything the game was doing, forcing me to quickly learn from my mistakes and improve. This is definitely a game for fans of the John Wick franchise; it embraces the IP so wholeheartedly that it may be hard for those who aren’t fans of the series to get into it. If you’re a fan of XCOM, Final Fantasy Tactics, or strategy games in general though, I would still definitely recommend giving this one a look regardless.